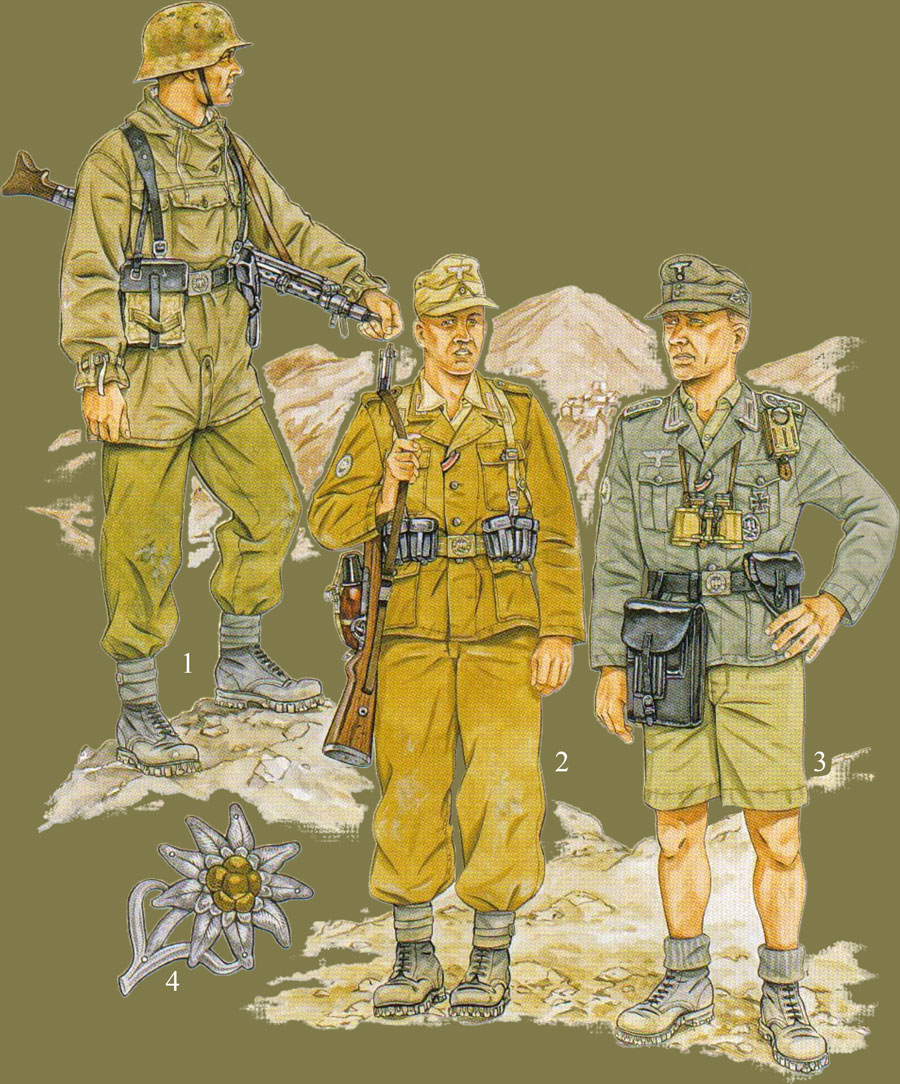 This machine-gunner from a mountain troop regiment wears the anorak with its grey side outermost, and with the tail strap between the legs fastened. Field grey mountain trousers are worn along with puttees and mountain-boots. His weapon is an MG34 machine-gun and on his belt he wears the machine-gunners' pouch containing cleaning kit, stripping tools and so on. He also carries a 9mm pistol in a leather holster on his belt. His steel helmet is the M42 pattern without insignia decals.

Operating in the Mediterranean theatre, this mountain trooper wears full tropical kit. The usual mountain-boots are worn, with ankle puttees, in conjunction with tropical trousers of typical baggy cut. He also wears the tropical field blouse similar to that worn by the Afrikakorps but with plain unpleated pockets having a straight rather than scalloped flap. The tunic collar and the shoulder straps have golden brown coloured NCO braid edging.

His belt and Y-straps arc made from olive green webbing material but have the standard black leather ammunition pouches for his Mauser Kar 98k carbine. His belt buckle is painted in an olive brown colour. He wears a tropical field cap with the cockade emblem enclosed by a chevron of light green piping. (This was no longer being added to new production caps, but many owners continued to wear the coloured chevron after it had been deleted by regulation.) His mountain troops' sleeve patch is woven on a tan backing. This is still rather contentious: although original examples apparently exist, there is still some debate as to whether or not such insignia was genuinely manufactured and issued during wartime.

This feldwebel is from a mountain troop unit operating in Italy in 1944. He wears the standard mountain-boots, but with socks rolled down over the tops of the boots, rather than using gaiters or puttees. He wears shorts cut from a pale olive green denim-type material, and a lightweight reed green denim summer tunic. The braid on his collar is woven in mouse-grey silk rather than aluminium braid.

The breast eagle and collar patches are woven in the same mouse-grey shade. Shoulder straps are now cut from a field grey rather than dark green cloth. The standard black leather waist belt and field grey painted buckle are worn, together with a black leather P38 pistol holster and map case. The Bergmütze, by then, had been largely replaced by the M43 field cap shown here, but the metal edelweiss badge on the side flap remained.

This is an example of the metal edelweiss badges worn on the side of the cap. 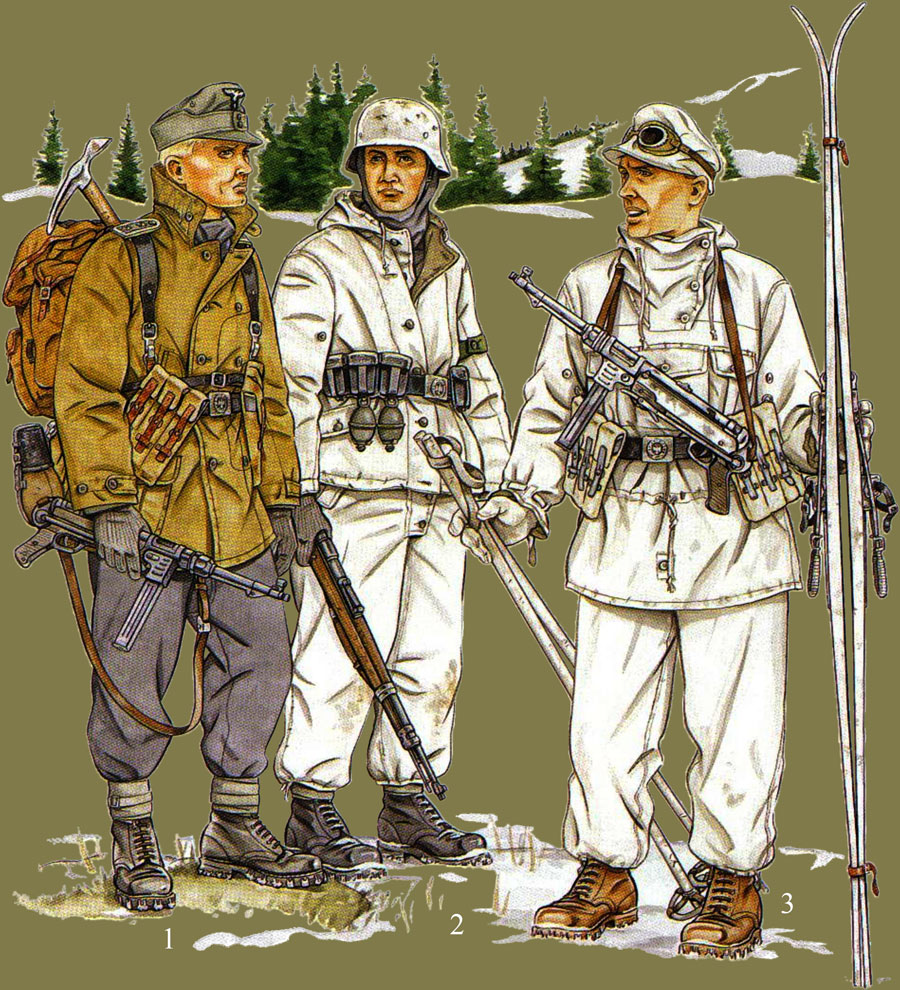 The standard-issue mountain troop windjacket is being worn by this Oberfeldwebel. It was designed to be worn over the normal field blouse and is fitted with shoulder straps. The usual black leather belt and Y-straps are being worn, together with the large, well packed mountain troops' rucksack. The NCO carries the MP38 machine pistol with its attendant ammunition pouches on his belt. As its name suggests, the windjacket was to help alleviate the wind-chill factor at high altitudes, but was a lightweight garment which in itself did not give any great protection from the cold. The standard Bergmütze is being worn.

In the terrible sub-zero temperatures of the Eastern Front, this mountain trooper wears the heavy padded reversible clothing, which has no visible rank insignia, with its white side outermost. The jacket has an integral hood, and access to the uniform underneath via the pockets. His steel helmet has been whitewashed to give added camouflage in snowy terrain. Although heavy padded mittens were also produced, this particular soldier has retained the normal field green knitted wool gloves.

This ski-trooper wears the standard reversible grey-to-white anorak, with the white side outermost, together with white overtrousers and mountain-boots which were purpose-designed to be suitable for use with skis. White padded mittens are worn. These were designed with a 'finger' for the trigger finger to allow him to fire his weapon without removing the mittens. The normal black leather belt is worn, with canvas pouches for his machine pistol. These pouches have been smeared with whitewash to aid concealment. Even his Bergmütze has a removable white camouflaged cover. 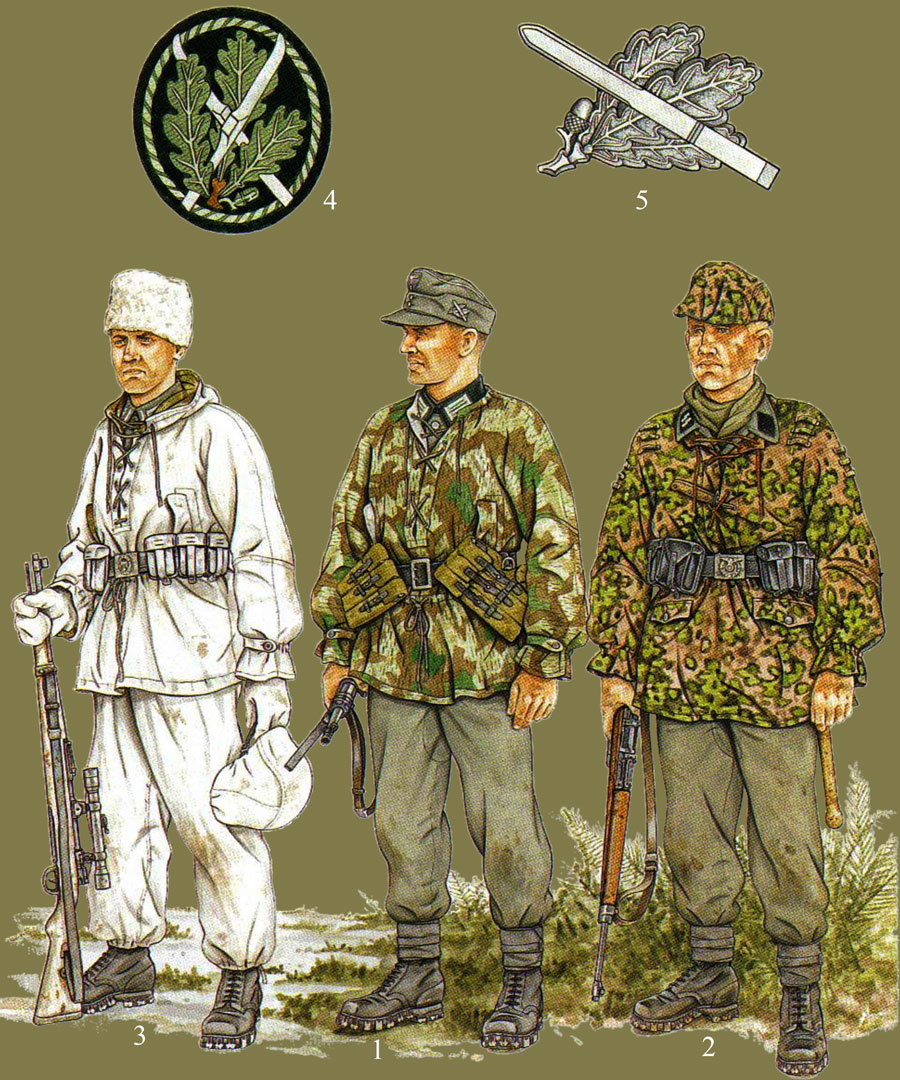 Fighting on the far northern sector of the Eastern Front, this junior officer from an army Ski-Jäger unit wears the army version of the Waffen-SS smock with the typical army 'splinter'-pattern camouflage effect. He wears the M43 field cap on the left flap of which is the Ski-Jäger cap badge. The officer has an MP40 machine-pistol, and wears its attendant ammunition pouches on his waistbelt.

This Waffen-SS mountain troop private from the 'Nord' Division wears the second-pattern Waffen- SS smock, with foliage loops and skirt pockets, with the green summer pattern outermost. His headgear is the M43 cap with a camouflaged helmet cover added to achieve maximum concealment. Although it may appear odd, photographic evidence shows the occasional use of the helmet cover with the M43 cap. Camouflaged field caps were manufactured but were not as widely issued as other forms of headgear. In the field, the soldier often had to make do with whatever was available.

This ski-trooper sniper wears one of the myriad of different patterns of fur cap produced for personnel serving on the Eastern Front in the winter months. His smock is the second-pattern army type, with attached hood, worn with its white side outermost, and he has a pair of matching white overtrousers.

White metal Ski-Jäger badge worn on the left side of the field cap. 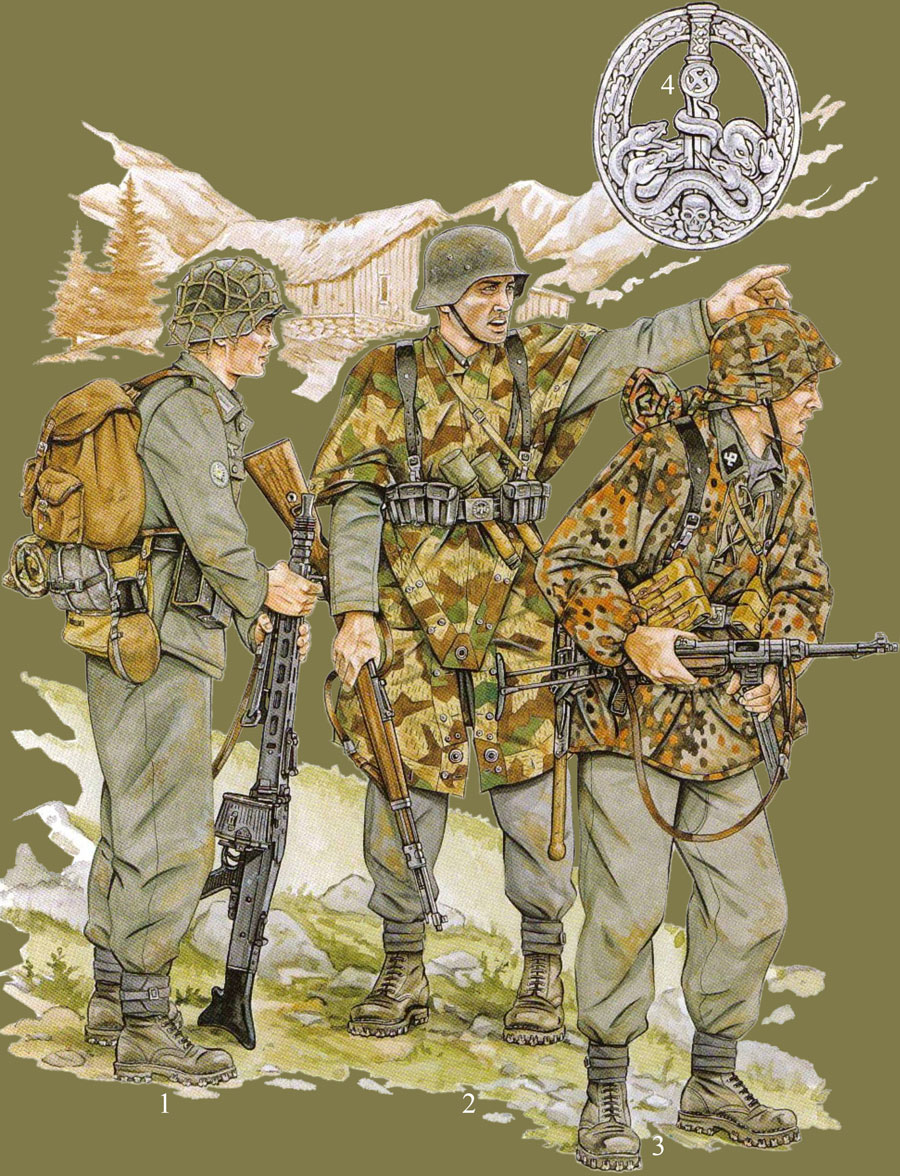 This mountain troop machine-gunner on anti-partisan operations in the latter part of the war is heavily laden with rucksack and MG42 machine- gun. He wears the army version of the M43 tunic, with the subdued mouse grey insignia. The tool pouch for his MG42 is carried on the right of his waistbelt, and the weapon has been fitted with a drum magazine. His M42-pattern steel helmet has had a piece of camouflaged netting added.

Few army units were as lavishly equipped with camouflaged clothing as were their Waffen-SS counterparts. The Zeltbahn of tent shelter quarter issued to each man could be worn in the form of a poncho, to give protection from rain and as a camouflage measure, as worn here.

This Waffen-SS mountain trooper from the 'Prinz Eugen' Division wears the camouflage helmet cover as well as the camouflage smock first pattern, which lacked the loops of later smocks. It was initially intended to be worn over the tunic, belt and equipment, slash openings on the smock giving access. Although photographs from the early stages of the war do show the smock worn like this, it soon became widespread practice to wear the belt and equipment over the smock, making access much easier. The smock has the predominantly brown, autumn, camouflage patterns outermost. 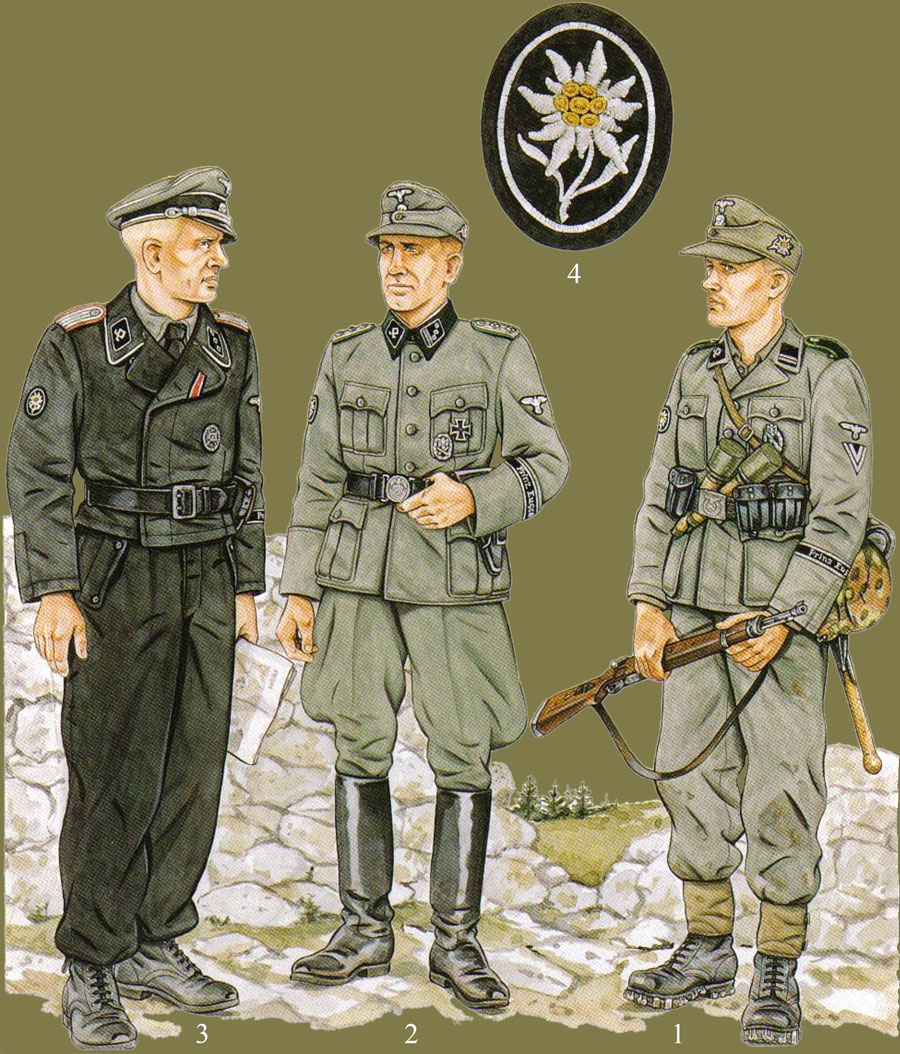 This Rottenführer of SS-Gebirgsjäger wears black ankle-boots with canvas gaiters into which his field grey wool trousers are tucked. His tunic is typical Waffen-SS style. It is all field grey, with five-button fastening, almost always seen worn with the top button undone and the collar pressed open. A black leather belt is worn, with the standard SS-pattern buckle, finished in a field grey colour, and pouches for the Kar 98k carbine. On his lower left sleeve is the divisional cuff-title 'Prinz Eugen'. A machine-embroidered sleeve eagle can be seen over the twin chevrons of his rank, in grey silk. His shoulder straps are black wool with light green piping. On his right collar the patch displays the Odal Rune emblem of the division, while the left patch shows a double strip of aluminium braid. His M43 field cap carries the Waffen-SS machine-woven cap insignia, but on the left flap is the machine-embroidered Edelweiss insignia of SS mountain units. He also wears a machine-embroidered Edelweiss patch on the right upper arm.

This officer, from the same division, wears polished leather jackboots with grey-green breeches and an M36-style tunic with dark green collar and four pleated patch pockets. On his lower left sleeve is an officers' version of the divisional cuff- title, woven in aluminium thread. The shoulder straps he wears are in matt aluminium braid with two white metal rank pips and have light green intermediary underlay between the braid top and black wool base. His right collar patch shows the Odal Rune in aluminium embroidery, while the left shows three rank pips and two strips of aluminium braid, indicating his rank as SS-Hauptsturmführer. The Edelweiss patch on his right sleeve is identical to the other ranks' version. He wears the black leather waistbelt with officers'-pattern buckle and a black leather P08 holster. As headgear he wears the officers' version of the M43 cap with aluminium braid piping to the crown and with the eagle and deaths head insignia woven in aluminium thread.

The 'Prinz Eugen' division also had an armoured detachment utilising mainly captured and obsolete enemy vehicles. This SS-Untersturmführer wears the standard Waffen-SS black Panzer clothing, with his trousers tucked into his ankle-boots. His collar patches bear the Odal Rune on the right and the three rank pips of his grade on the left. His sleeve eagle is woven in aluminium thread. His shoulder straps bear the piping intermediate underlay of armoured personnel, though the Edelweiss patch on his right sleeve still indicates his membership of a mountain unit. He wears an army-pattern black leather belt with double claw buckle (the circular SS officers' buckle was notorious for springing open). His headgear is the usual Waffen-SS officers' peaked cap with white piping (coloured piping on SS caps was extremely rare).

These were the same for officers and other ranks.