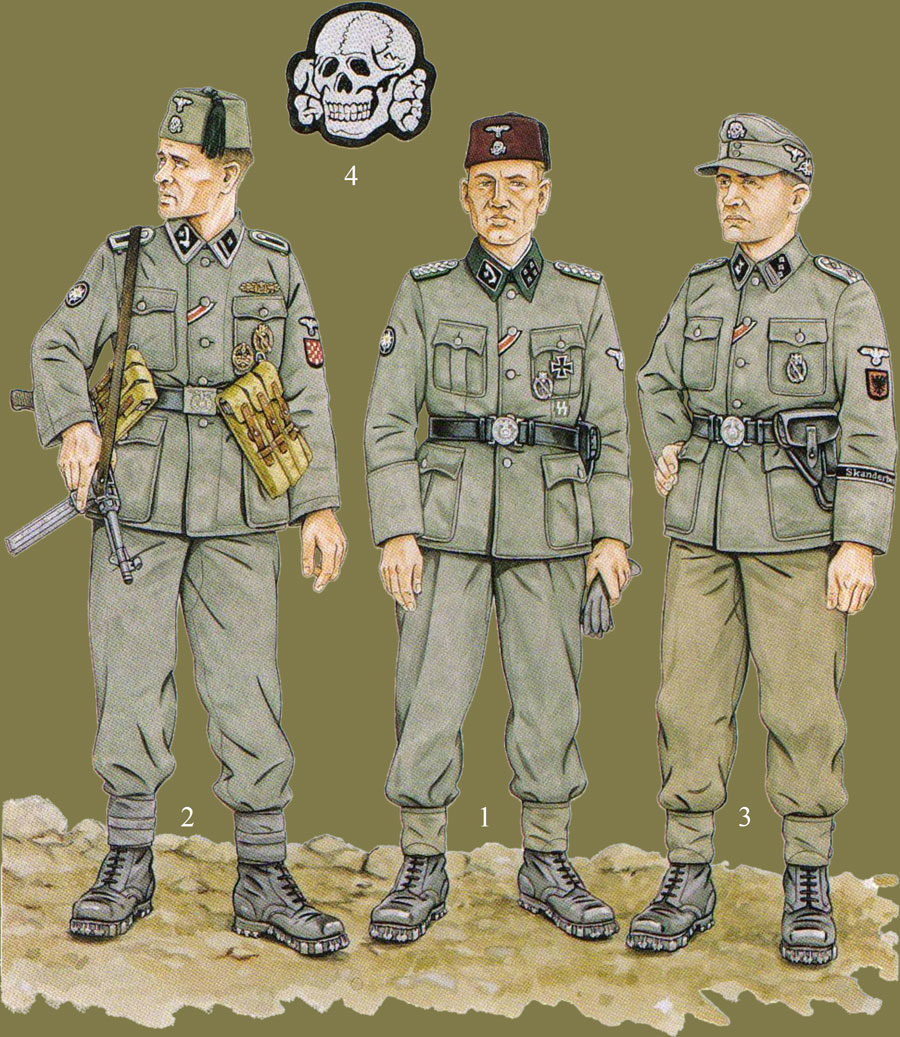 This German SS-Sturmbannführer attached to the 'Handschar' Division wears mountain-boots with his trousers tucked into canvas gaiters. He has the standard M36-style officers' tunic with hand-embroidered aluminium thread sleeve eagle. His collar patches show, on the right, the scimitar emblem of the division (but in its other ranks' form), machine-embroidered in silver-grey thread. It has, however, had officers' silver twist cord edging added. The left patch shows the four white metal pips of his rank. His shoulder straps have light green intermediary piping. On his left breast pocket, as a German national and full SS member, he wears the hand-embroidered SS runes patch. This was permitted for all full SS members operating with units not entitled to use the SS runes collar patch. The black leather belt with circular officers' buckle is worn. Head-dress consists of a burgundy fez with standard SS-pattern officers' cap insignia woven in aluminium wire.

This SS-Scharführer from the same division as I1 wears normal service dress comprising long field grey trousers, mountain-boots and puttees, worn with the M43 field blouse. On his left sleeve is a machine-woven sleeve eagle over a shield in the national colours.

The shoulder straps are made from black wool with aluminium braid edging. The right collar patch bears the scimitar/swastika emblem, while the left bears a single strip of aluminium braid with a single rank pip. The Edelweiss emblem is worn on the right sleeve. His black waistbelt carries the field grey painted SS buckle and the ammunition pouches for his machine pistol. His fez is the field service version in field grey felt. On his left breast pocket is the anti-partisan badge, which indicates that he has taken part in actions against Tito's partisans.

This is an SS-Hauptsturmführer from the 'Skanderbeg' division. He wears normal ankle- boots with canvas gaiters into which his trousers are tucked. His tunic is an officer quality version of the M43 field blouse with plain field grey collar. On his left sleeve is the divisional cuff-band woven in silver-grey silk thread on black. His sleeve eagle is the typical officers' style in hand-embroidered bullion wire, and is worn over a shield bearing the Albanian double-headed eagle on a red field.

The right hand collar patch shows the crested helmet insignia of the division. Though these were definitely manufactured, no photographic evidence of them being worn has yet surfaced. His left collar patch shows the three rank pips and two braid stripes of his grade. His headgear is the M43 cap. The deaths head insignia is worn to the front, with both the eagle and Edelweiss emblem to the side.

Machine woven SS deaths head cap insignia which was worn on most forms of headgear including the fez. 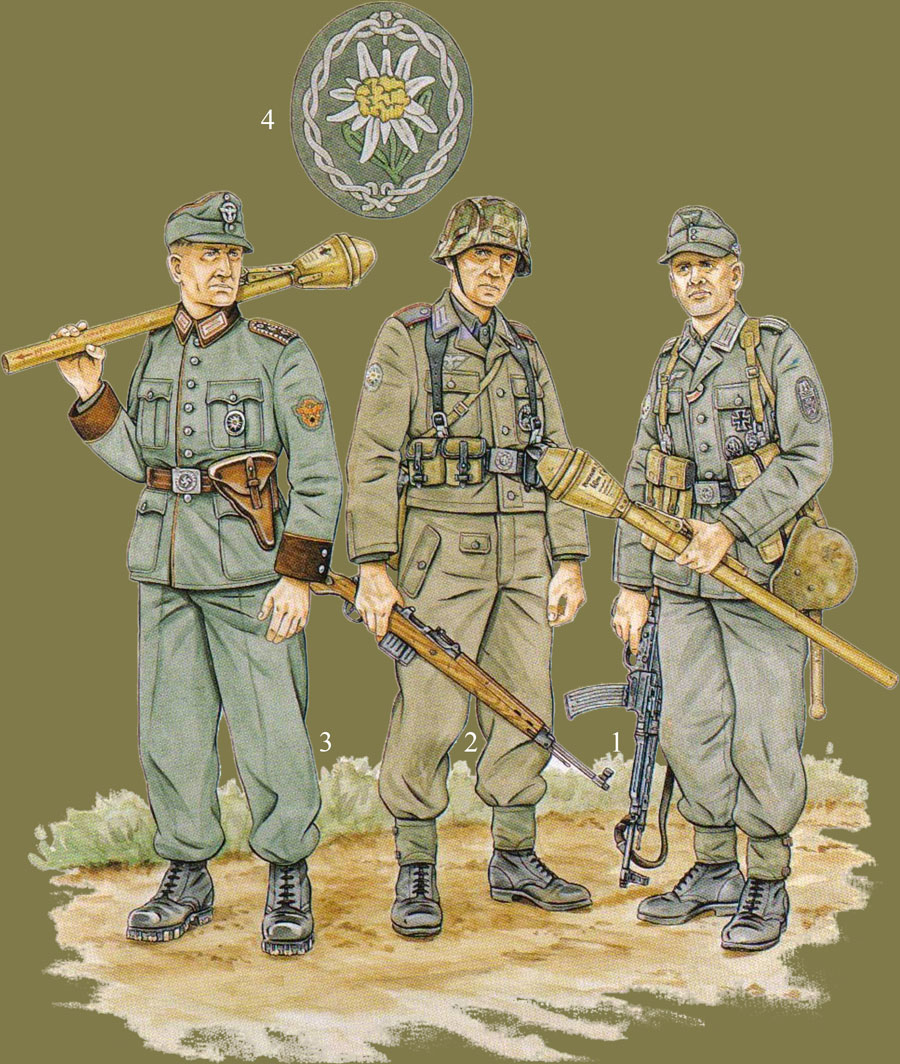 This Unteroffizier of Gebirgsjäger wears the M43-pattern service dress. The trousers in field grey wool are worn with canvas gaiters and ankle- boots. The M43-pattern tunic now has a plain field grey collar and four unpleated patch pockets with straight-cut flaps. The tunic has a six - rather than five-button fastening and both the collar patches and the breast eagle are woven in mouse-grey silk. The shoulder straps and tunic collar are trimmed in grey rather than aluminium braid. On the right sleeve is a machine-embroidered version of the Edelweiss patch, on field grey backing.

The normal black leather belt with field grey painted buckle is worn, as is the general issue M43 field cap. The NCO is a veteran of the Narvik battle as shown by the Narvik Shield worn on the upper left sleeve. Like many specialist troops, Gebirgsjäger often found themselves fighting as ordinary infantry, far from the mountain environments in which they excelled. This NCO, fighting somewhere on the Eastern Front against marauding Red Army tank formations, carries the excellent StG 44 assault rifle and Panzerfaust antitank projectile launcher.

The final appearance of the mountain trooper in 1945 is reflected here. The jacket, of M44-pattern, is similar to the British battledress blouse, even having a distinctly brownish hue. It has two patch breast pockets and a distinct waistband. The eagle is now woven on a triangular backing - easier to manufacture and easier to sew to the tunic than the outline of the previous pattern. The shoulder straps have red piping, indicating that the soldier belongs to a mountain artillery unit. The steel helmet is worn with its camouflaged cover. Trousers of a similar brownish shade to the jacket are worn, with canvas gaiters and ankle-boots. Although the appearance of the mountain trooper had deteriorated somewhat, his weaponry has not: he carries the Gew.43 automatic rifle, and its distinctive pouches are carried on his standard black waist-belt.

The German police also maintained personnel trained for mountain service in the Alpine areas of the Reich. This mountain police NCO wears black leather mountain-boots and long field grey trousers bloused at the bottom, their ends tucked into his boots. The field grey worn by police units often had a more greenish hue than that used by the army, often referred to as 'police green'. His tunic has a contrasting mid-brown collar and cuffs, with four pleated patch pockets. The tunic has an eight-button fastening to the front and traditional orange Gendarmerie piping to the front, collar and cuffs. Gendarmerie-pattern collar patches and shoulder straps are worn, with a Gendarmerie-style orange thread embroidered arm eagle. He wears a Bergmütze with single-button fastening to the flap and orange piping to the crown. Insignia consists of a metal cockade over an aluminium Polizei-pattern cap eagle. A brown leather belt is worn, with a P38 pistol holster and aluminium Polizei-pattern buckle.

This is a wartime pattern machine embroidered patch on field grey backing. 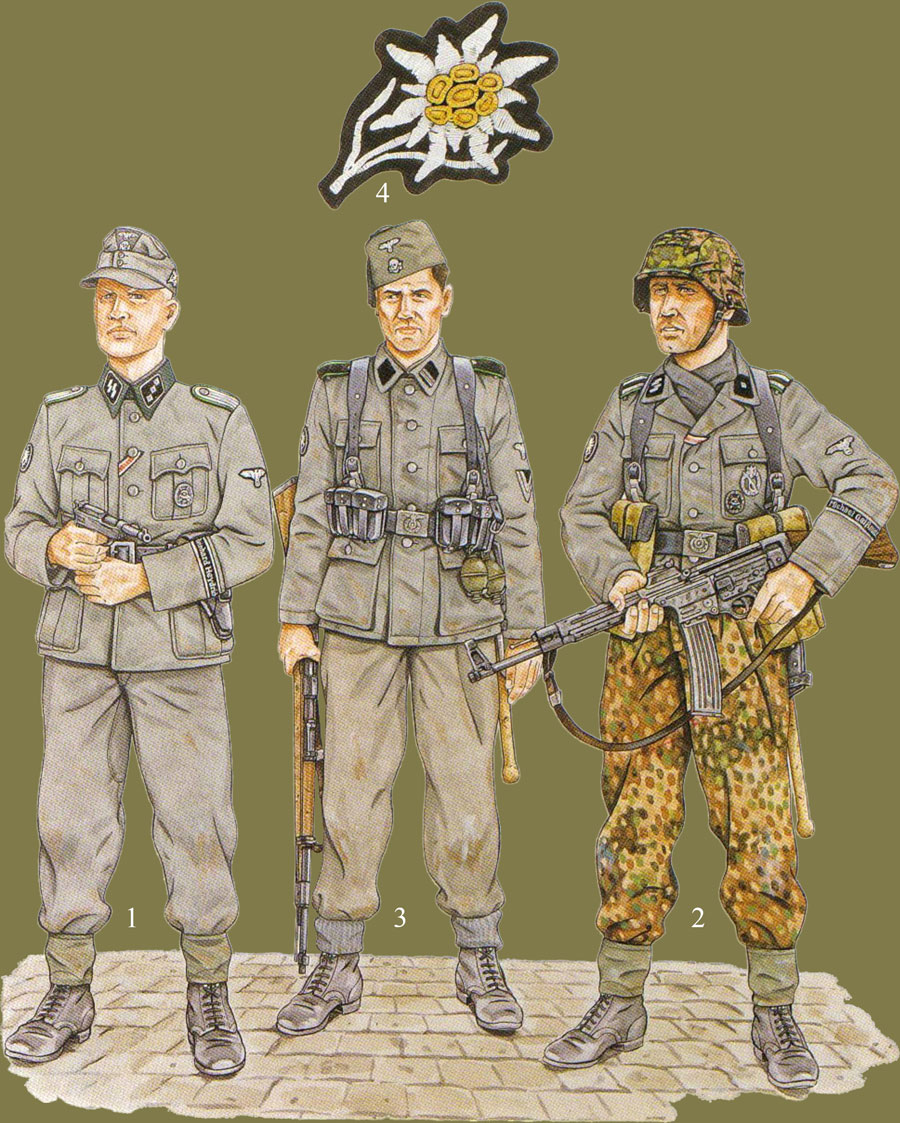 Fighting in the defence of Germany in late 1944/early 1945, this officer is from the Nord Division. He wears the usual ankle-boots and canvas gaiters with field grey trousers, and an officers' version of the M36 field blouse. On the lower left sleeve is an officer-quality cuff-band woven in aluminium thread on black, with the legend 'Reinhard Heydrich'. His sleeve eagle is also woven in aluminium thread. As a German national he wears the standard SS runes collar patch on the right, and the three rank pips of the rank of SS-Untersturmführer on the left. Headgear is a late version of the officers' M43 cap, with its insignia woven in light grey thread on a field grey trapezoidal backing. The usual Edelweiss insignia is worn on the left side flap. An army-pattern belt with double claw buckle is worn, with a black leather holster for a P38 pistol.

This SS-Unterscharführer from the 'Nord' Division wears M44 service dress. Black leather ankle-boots and canvas gaiters are worn with the camouflaged-pattern trousers. On the lower left sleeve of his short battledress style blouse is the machine-woven cuff-band 'Michael Gaissmair' in grey thread on black. His sleeve eagle is also machine-woven in grey thread. The black woollen shoulder straps have grey silk NCO braid edging but, as was often the case in the latter stages of the war, no NCO braid has been fitted to the collar of his field blouse. He wears a machine-woven runic collar patch on his right collar and a single rank pip on his left collar patch. On his belt are the ammunition pouches for his superb StG 44 assault rifle. Headgear comprises the steel helmet with camouflaged cover.

This Rottenführer is a Croat Moslem from the 'Kama' Division. He wears the standard field grey trousers with ankle-boots but instead of gaiters or puttees has rolled his socks down over the tops of the boots. The standard M43 field blouse is worn. The machine-woven arm eagle on the left sleeve is positioned over the twin chevrons of his rank. On the right upper sleeve is the Edelweiss arm patch. His shoulder straps are black wool with light green piping, and his left collar patch shows a double strip of aluminium braid indicating his rank. He wears a black leather belt with field grey painted buckle, leather Y-straps and triple pouches for his Kar 98k. Headgear is the field grey fez as worn by the 'Handschar' Division, though a field grey conical skullcap was also worn by this division.

This is the SS-pattern cap badge worn on the side of the Bergmütze.