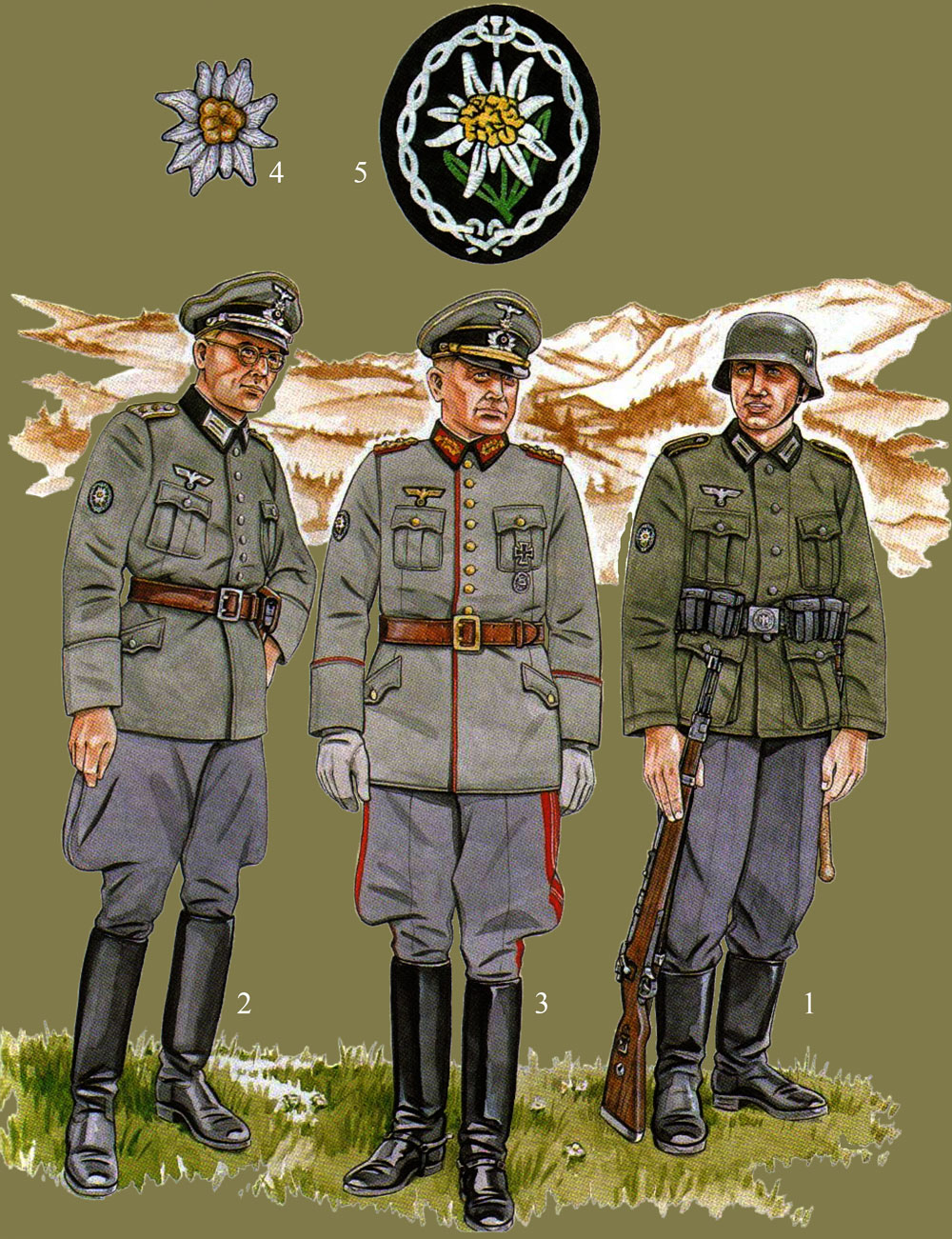 The Gebirgsjäger private is wearing normal everyday service dress. His steel helmet is the M35 pattern with insignia decals. The tunic worn is the M36 pattern in good quality field grey wool. The insignia is the early pattern in machine-woven artificial silk threads. Both collar patches and shoulder straps bear the light green piping colour of Jäger troops. The trousers are in the so-called 'stone grey' colour, this was later replaced with field grey due to the demand for standardisation in the wartime economy; they are tucked into standard-issue marching boots. He wears the standard black leather waistbelt, with aluminium finish buckle, to which has been added the triple pocket ammunition pouches for his Mauser 7.92mm Kar 98k carbine. The standard-issue bayonet is worn from a black leather frog.

This Hauptmann of Gebirgsjäger wears the officers' tunic with dark green collar, but with the earlier eight-button front fastening and slash, rather than patch, lower pockets common features of officer tunics in the Reichswehr period. His insignia is in fine quality hand-embroidered aluminium wire. The standard officers' service belt in brown leather and with double claw buckle is worn. His officers' breeches are also in the early, stone grey colour and are worn with highly polished officers' riding boots. Headgear is the peaked cap, or Schirmmütze, identified as Gebirgsjäger by the light green piping to the crown and band and the small white metal Edelweiss motif.

The piped service tunic worn by this general of mountain troops shows bright red generals' piping rather than the light green of the Gebirgsjäger. His status as General der Gebirgstruppe is shown by the Edelweiss arm patch and white metal Edelweiss motif on the cap. Underlay to the collar patches and shoulder straps is also in bright red, as are the broad 'lampassen' stripes to the outer seam of his stone grey breeches. His peaked cap bears gilt piping to the crown and band, and gilt aluminium braid cap cords. The insignia, however, are embroidered in silver wire. His brown leather belt bears the same style of buckle as the standard officers' belt, but in matt gilt finish.

This small white metal Edelweiss is worn below the eagle and swastika national emblem on the peaked cap (see A1 and A2). It was introduced in May 1939.

Made to a standard machine woven pattern, the Gebirgsjäger sleeve patch, introduced in 1939, was worn by all ranks. 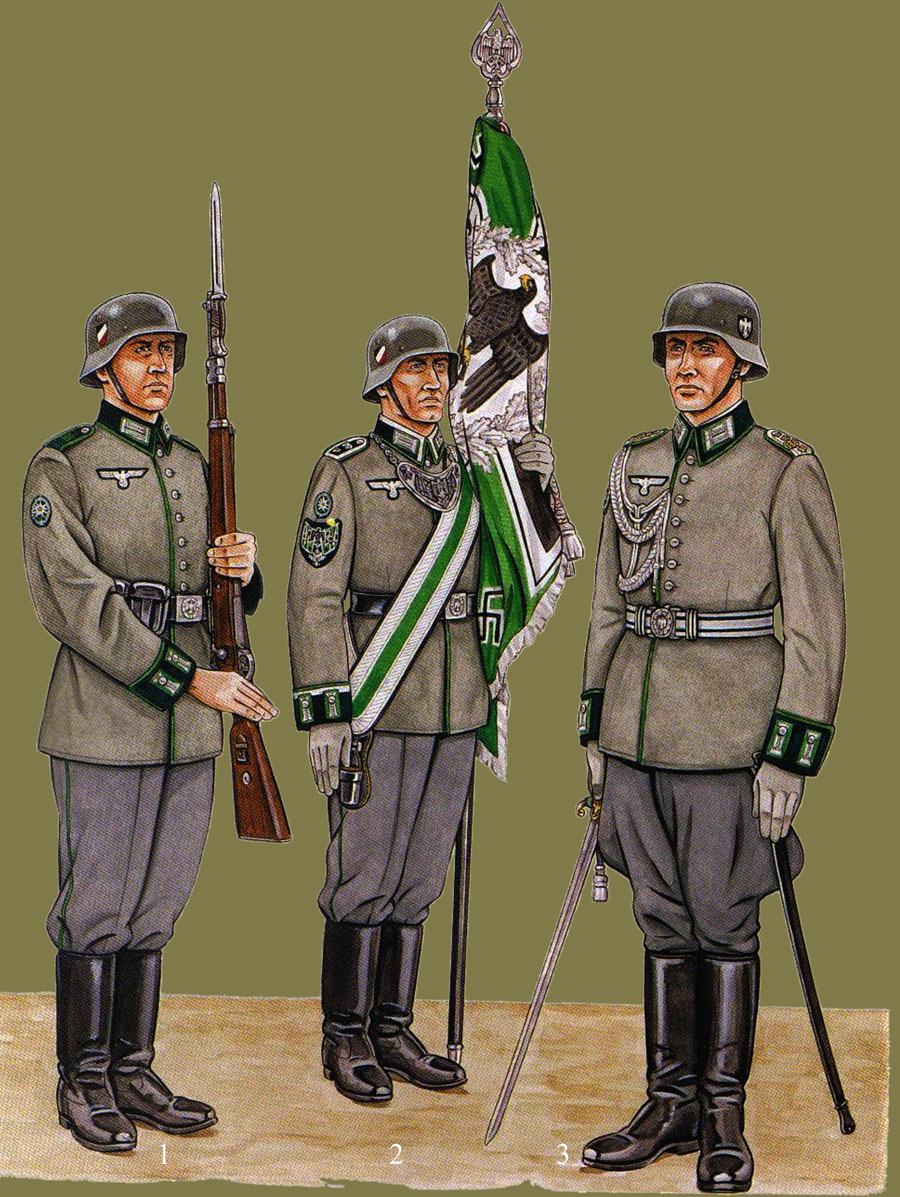 The Waffenrock or parade dress jacket is being worn by this Jäger. Note that the front of the jacket, collar and cuffs arc all piped in light green. The collar patches and cuff patches are mounted on light green backing material and on his right upper sleeve is the Edelweiss sleeve patch of the Gebirgsjäger.

All buttons are in bright aluminium finish, and the breast eagle is woven in bright aluminium thread. His regimental number '98' is embroidered into the dark green shoulder straps, in light green thread. His trousers, tucked into his jackboots, are in stone grey wool and have light green piping to the outer seam. His helmet, as was common for parade wear, is in a light grey green smooth paint finish. Combat helmets were usually of a darker shade, with a rough paint finish.

This Feldwebel's Waffenrock tunic is identified as an NCO pattern by the wide aluminium braid trim to the collar and cuffs, as well as to the shoulder straps, which bear aluminium numerals, '99', and a single rank pip. On the right sleeve, as well as the Gebirgsjäger arm patch, is the standard bearers' insignia. This is worn below the Edelweiss patch. It consists of a machine-woven national emblem in black thread with white highlights, superimposed on two crossed banners featuring the light green field for Jäger troops, all over a sprig of oakleaves. Across the shoulder he wears a leather bandoleer, faced with aluminium braid with a central stripe of light green.

This officer's Waffenrock dress is basically similar to that worn by lower ranks, but in finer quality materials and with heavy hand-embroidered aluminium wire insignia. His status as adjutant is shown by his aluminium braid aiguillettes. His shoulder strap numerals identify him as belonging to Gebirgsjäger-Regiment 136, part of 2.Gebirgs-Division. The officers' parade belt is in fine aluminium brocade with green stripes, and has an aluminium buckle. The steel helmet was common parade wear for officers as well as lower ranks. 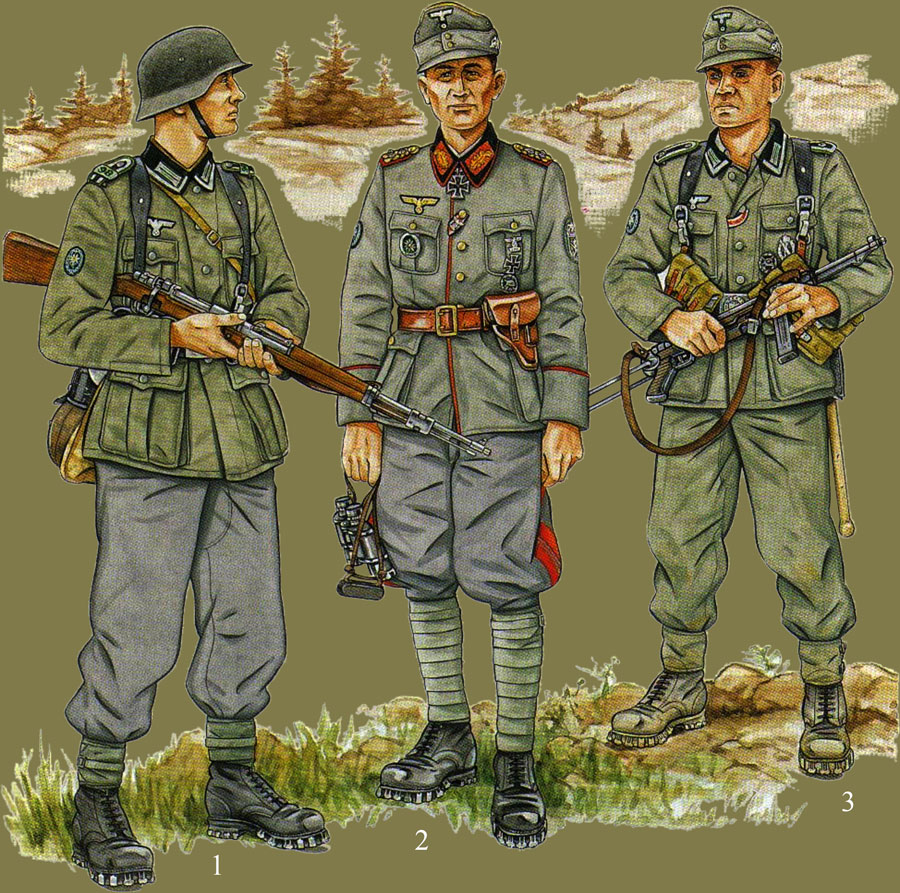 This Unteroffizier shows the typical appearance of the Gebirgsjäger in normal service dress around the outbreak of war. The stone grey trousers are still evident, having not yet been replaced by field grey issues.

His belt buckle is now finished in field grey rather than bright aluminium, and his steel helmet has a darker, rougher paint finish. Although not visible, on his waistbelt are the triple pocket ammunition pouches for his Mauser Kar 98k carbine, and he wears black leather 'Y'-strap equipment suspenders. He still wears the regimental number on his shoulder strap, but now on a separate, removable cloth slide.

Puttees were favoured by General der Gebirgstruppe Dietl, worn to just below the knee, in conjunction with his general's breeches. This view shows him just after the battle of Narvik. (Note that he wears the Knights Cross and Narvik Shield awarded to him for his part in that battle.) His tunic is the basic M1936 officers' pattern, but with generals' rank insignia, gilt buttons and red generals' piping to the front and to the edges of the turn-back cuffs. His generals' version of the Bergmütze had gilt piping to the crown and gilt buttons fastening the side flaps.

This Oberfeldwebel fighting on Crete in 1942 wears the black leather mountain-boots with canvas gaiters into which he has tucked his field grey mountain trousers. His tunic is a simplified version of the M1936 pattern, which though still featuring the dark green collar, has plain unpleated pockets with straight rather than scalloped flaps. The breast eagle is now in grey rather than white thread on dark green backing and his collar patches are general-issue type, lacking the light green Waffenfarbe colour to each bar. As an NCO his collar is trimmed in aluminium braid. The other ranks' version of the Bergmütze is worn. The insignia is woven on a T-shaped backing and on the side of the cap is the grey metal Edelweiss insignia. 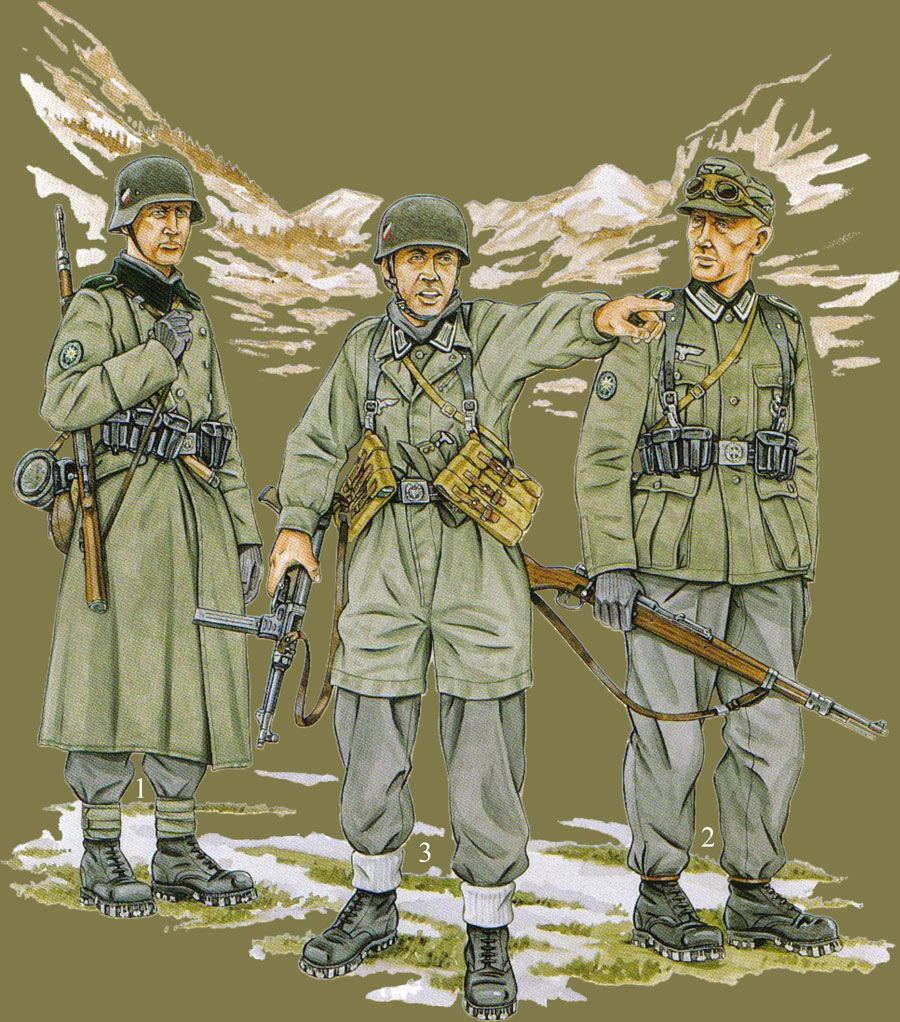 This mountain troop private wears the standard- issue greatcoat for duties in cold climate or in the winter months. Note the puttees worn with the mountain-boot and the boot's heavily studded double-thickness sole. He carries the standard Kar 98k, the most widely used infantry weapon of the German armed forces in the Second World War. Circa 1940, his helmet still bears the national colours decal on the right side, a feature that was soon to be deleted.

This mountain troop NCO wears light fighting- order with his M1936-pattern tunic and mountain trousers The tunic carries NCO braid to the collar and to the edges of the shoulder straps. The popular Bergmütze is worn, with its edelweiss insignia on the left flap, together with snow goggles. Once again the ubiquitous Kar 98k is the weapon carried.

During the battle for Narvik, a number of Gebirgsjäger reinforcements were dropped by parachute to reinforce General Dietl's beleaguered forces. This NCO wears normal M1936 service dress with mountain trousers, but with the standard-issue Luftwaffe paratroopers' smock over his normal clothing, hence the Luftwaffe breast eagle carried on the smock. He also wears the Luftwaffe paratroopers' steel helmet, though the NCO carries his Bergmütze tucked into his belt. The weapon here is the MP38 machine-pistol for which two triple pocket, canvas ammunition pouches are worn.