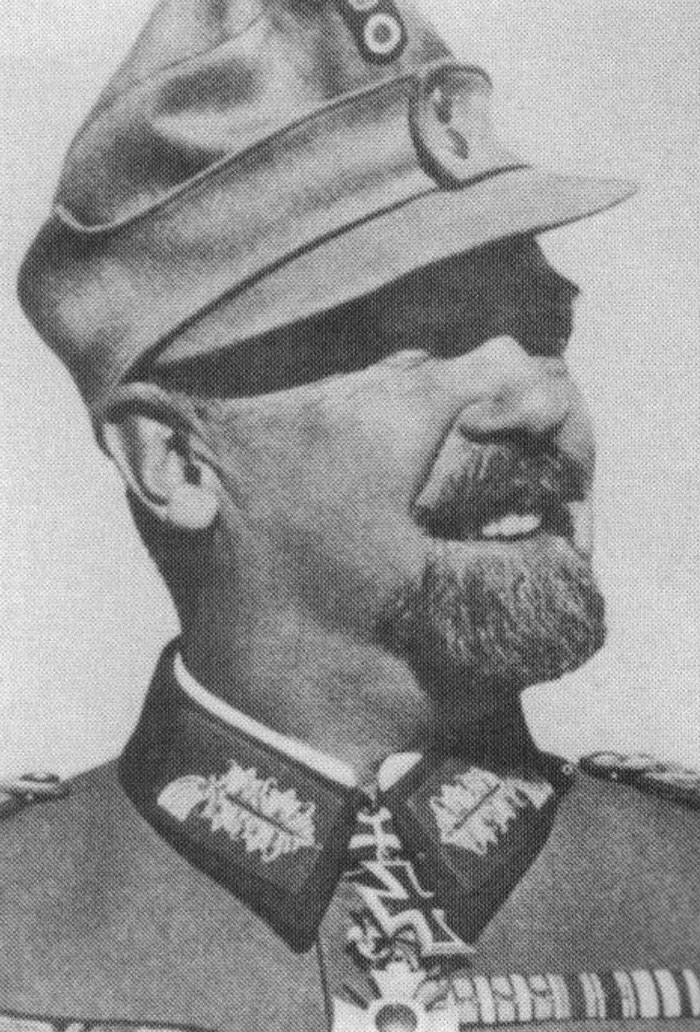 In 1942 the order was given for the formation of a new Volksdeutsche volunteer division, to be officered by those who had served in the Hapsburg army. In April 1942 the new division, entitled SS- Freiwilligen-Division 'Prinz Eugen', was experiencing considerable difficulty getting its uniforms, equipment and armaments. In fact, throughout its life the division had, to some extent, to depend on captured equipment. 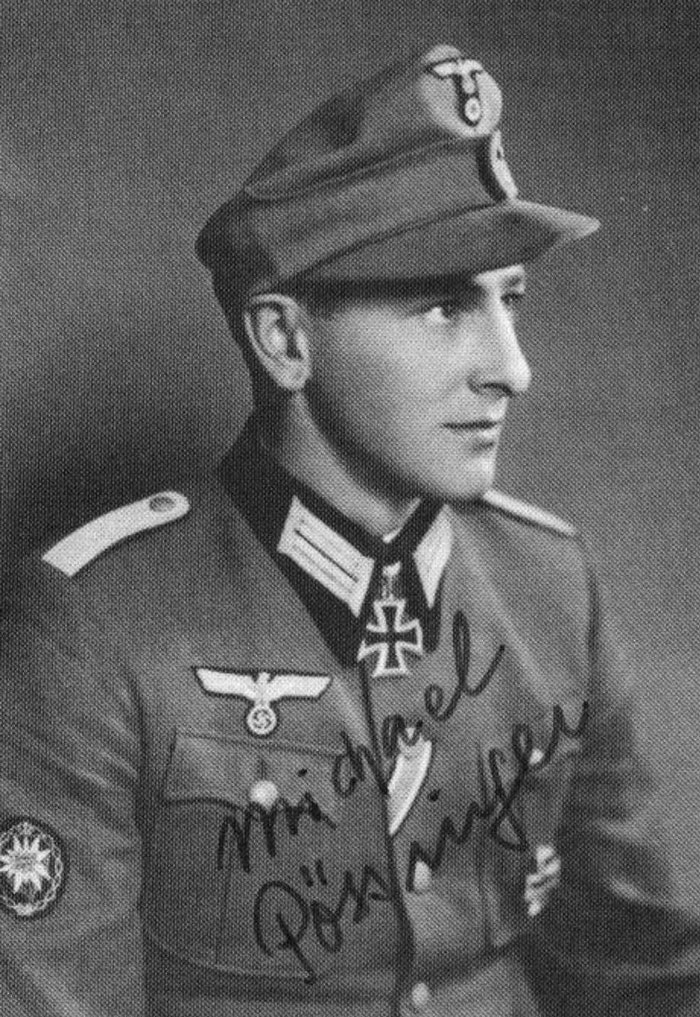 A fine portrait study of Knights Cross holder Leutnant Michael Pössinger of Gebirgsjäger Regiment 98. Shown here wearing the Knights Cross, Pössinger was also to win the Oakleaves, in February 1945. The Gebirgsjäger arm patch is clearly shown, as is the T-shaped backing to the insignia on his Bergmütze. (Pössinger)

Under the command of Artur Phleps, a former general in the Romanian army, the division went into action in October 1942 against Tito's partisans in Serbia. It subsequently took part in anti-partisan actions throughout Montenegro, Bosnia and Herzogovina, and was also involved in the disarming of Italian units after Italy's surrender in the summer of 1943. In the spring of 1944 it took part in the attack on Tito's headquarters in Drvar, where SS paratroops were also used in force for the first time: 'Prinz Eugen' smashed Tito's 1st Partisan Division during this battle. As the war progressed, however, the greater danger was to come from advancing Soviet forces. The division covered the retreat of Heeresgruppe E through Yugoslavia, before withdrawing itself, suffering heavy casualties in the process.

The division was reinforced towards the end of the war, and in January 1945 again went on to the offensive against Tito's partisans, achieving considerable success but again suffering heavy casualties.

As part of XXXIV Korps, Heeresgruppe F, th division took part in the retreat northwards, but i was unable to escape as a cohesive unit. Some elements of the division released from their oath of allegiance in the closing moments of the war managed to escape westwards, but most were forced to surrender to Tito's partisans. Very few of those who went into captivity survived. 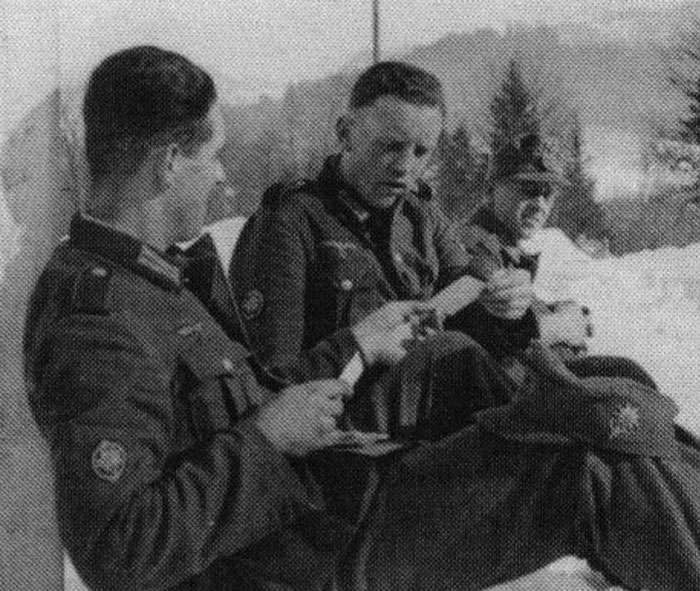 A group of Gebirgsjäger relax during a lull in the fighting on the northern sector of the Eastern Front. Note the Bergmütze, with its Edelweiss badge, balanced on the knee of the soldier in the foreground.

This division was raised in early 1943. It was intended that it be recruited solely from Bosnian Moslem volunteers, but because of a shortage of volunteers, members of the local Christian communities were apparently pressed into service. The division was officered by experienced German Waffen-SS personnel.

Due to considerable opposition to the raising of this division by the pro-German Croat Ustaschi movement, it was to be formed not in its homeland, but far to the west, in occupied France. It went through numerous name-changes during its formation, including Kroatische SS-Freiwilligen Division, Muselmanen Division and SS-Freiwilligen Bosn.-Herzogov.-Gebirgs-Division (Kroatien), before reaching its final designation. 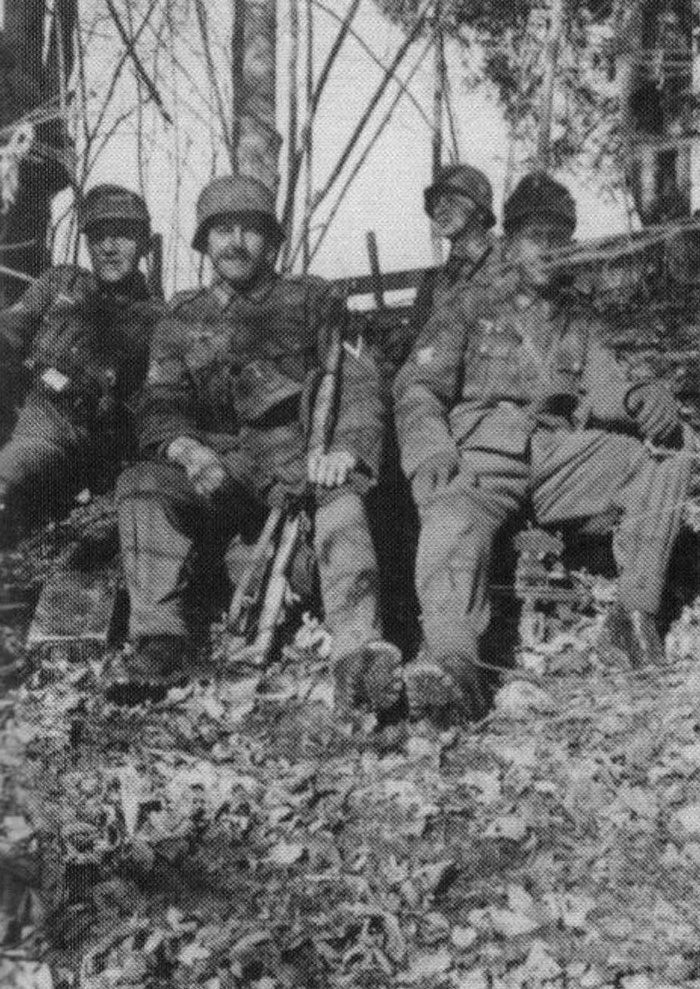 Gebirgsjäger from a Gebirgs-Division on the Eastern Front. Unusually, one wears the steel helmet, but his Bergmütze can be seen tucked into his waistbelt. The studs and deals on the soles of the mountain-boots are visible on the soldiers in the foreground. (Ian Jewison) 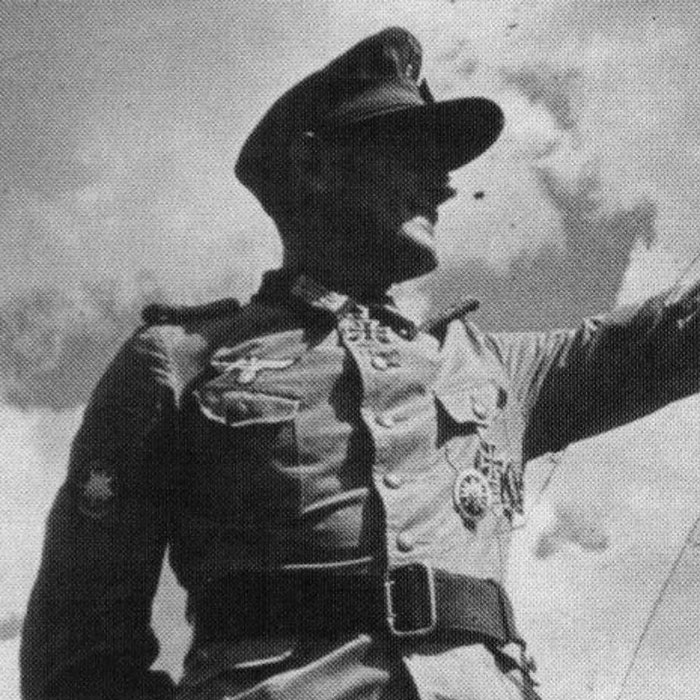 Himmler was keen to retain the goodwill of the Bosnian Moslems, and in a letter to the commander of the 'Prinz Eugen' Division, which was to assist in the formation of 'Handschar', he explained that the volunteers would have, as had their predecessors who had served in the Hapsburg army, full freedom to practise their religion and to wear the traditional fez head-dress.

The division experienced problems almost immediately during its working up period in France. Many of the German personnel training the Moslem recruits had a less than sympathetic attitude towards their charges. Animosity grew to such an extent that some elements of the division mutinied. Retribution was swift: the mutiny was quickly put down and its ringleaders executed. Himmler was furious, however, that the situation had been allowed to deteriorate to such a degree.

With its reliability now uncertain for many Germans, the division was sent into action in January 1944, and it served on anti-partisan duties in northern Bosnia until the autumn of that year. The approach of the Red Army in the latter part of 1944 saw many of the division's Moslem personnel demobilised and simply sent home. The remnants, principally the German cadre personnel, fought on as battle groups before being reunited towards the end of the year.

Despite its earlier reputation for lack of reliability, those now remaining in the division fought well, and in the closing stages of the war, five of the division's German cadre personnel were awarded the Knights Cross of the Iron Cross for gallantry and distinguished service. The division saw action in the final German offensive in the area around the Platensee, before being driven westwards into Austria. There they surrendered to British forces at the end of the war. 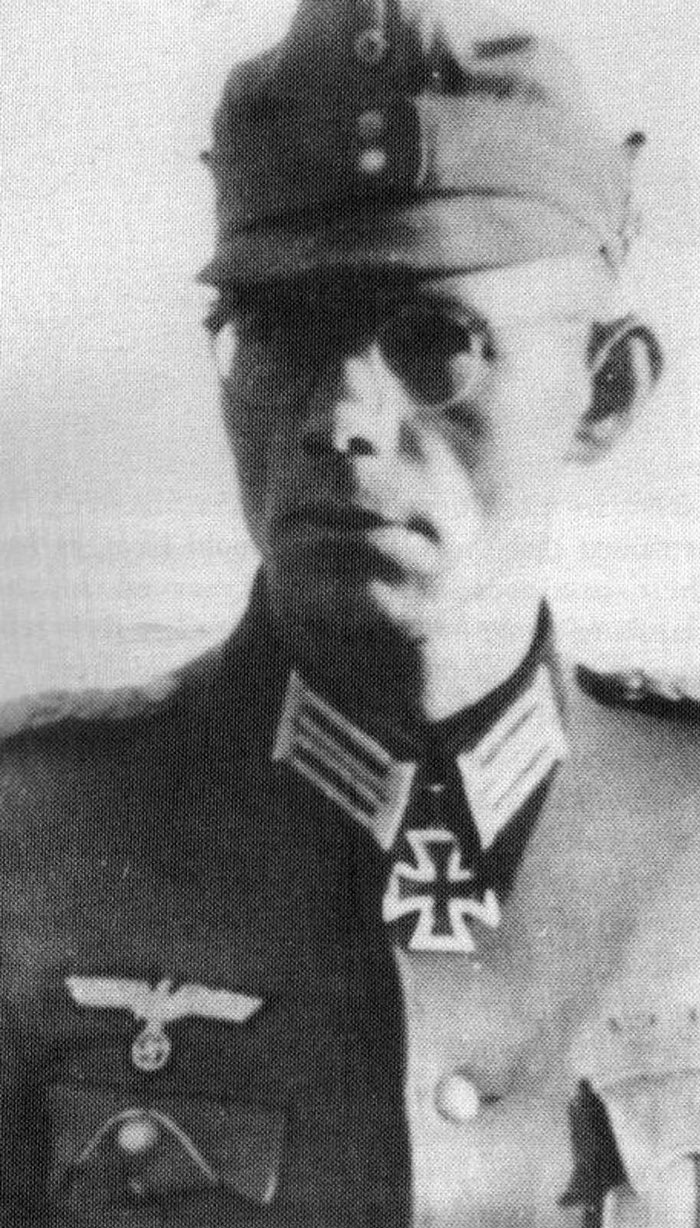 Oberstleutnant Richard Ernst, commander of Gebirgsjäger Regiment 100. Note the ribbon of the Mood Order on the right breast pocket flap, indicating that he took part in the abortive Munich Putsch, in November 1923. (Josef Charita ) 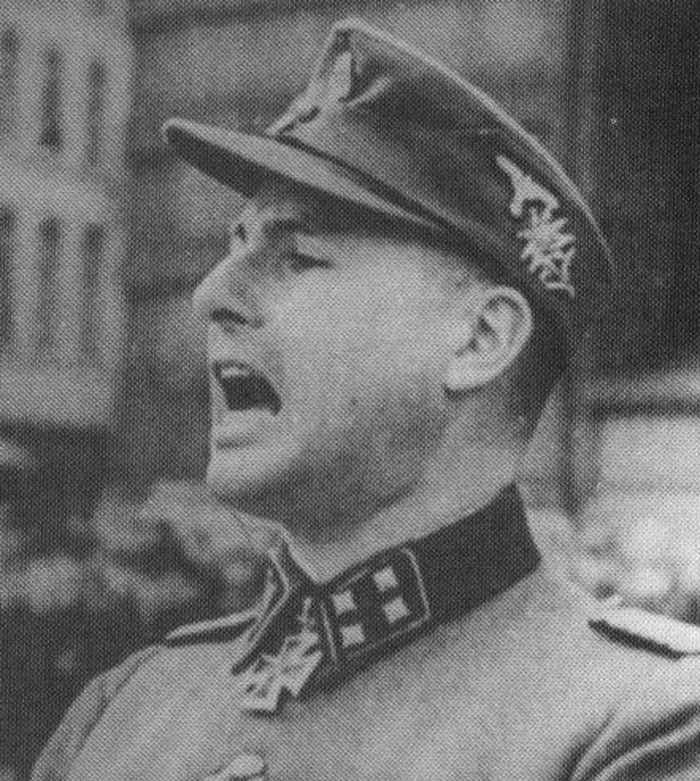 SS-Sturmbannführer Léon Degrelle, commander of SS-Sturmbrigade 'Wallonie', wears an M43 field-cap with, unusually, an army- rather than SS-pattern Edelweiss, at with the direction of the badge reversed the stem of the Edelweiss should point towards the front of the cap. This unit was entitled to wear the mountain troop insignia in commemoration of an attachment to a mountain troop unit of the army before the Walloon volunteers were transformed to the Waffen-SS. (Josef Charita)

The other units of the division would have carrier the divisional number 21, but the division never reached full strength and it is not known how many of the remaining divisional elements were ever effectively formed. 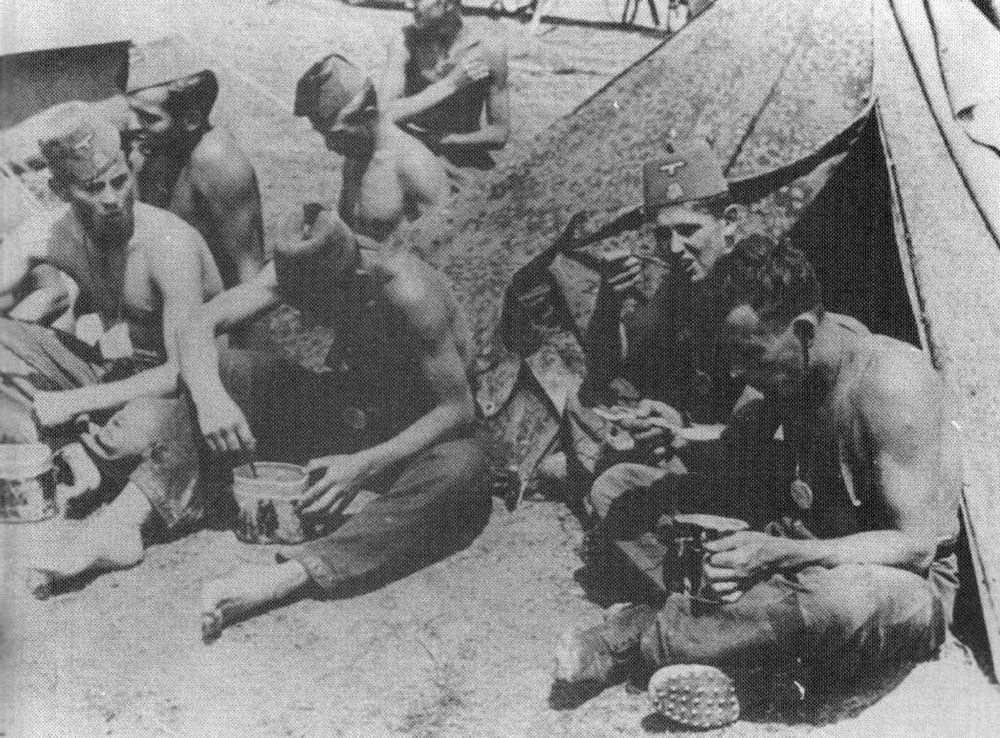 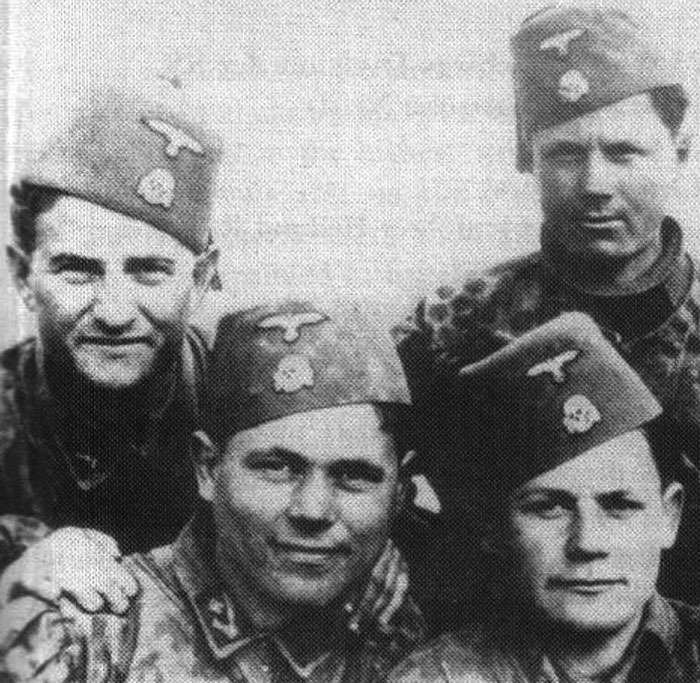 Bosnian Moslems from the 'Handschar' division relax over a meal in the summer sunshine. Note the tents assembled from camouflaged Zeltbahn buttoned together. (Josef Charita)

Raised in 1944, this formation was to have comprised Albanian Moslem volunteers. It suffered from a poor standard of volunteer, many of whom, even at this late stage of the war when every man was needed, were rejected as unsuitable. By the end of the year only around 6,000 or so suitable volunteers had come forward. Lack of appropriate armaments and other equipment also delayed its formation. 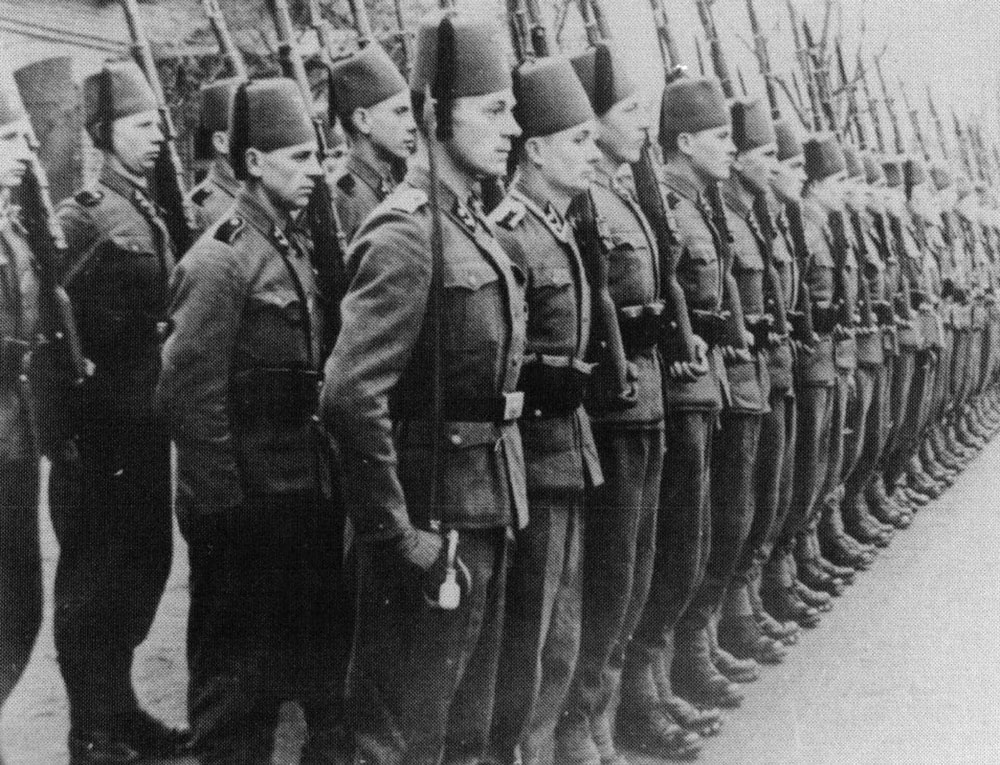 A parade of volunteers from the 'Handschar' division. Their collar tabs are visible, but they are not wearing the Edelweiss sleeve patch. Mountain-boots with puttees or gaiters are worn. The fez worn is the burgundy red parade version. (Josef Charita)

Despite not being fully organised, elements of the division were committed to battle against partisan units, with results that were less than impressive. A draft of around 3,000 German personnel, mostly former Kriegsmarine sailors who were now surplus to the requirements of the navy, reached the division in late 1944. With a much greater proportion of dependable German cadre personnel, the division took part in the fighting retreat through the Balkans. The Albanian Moslem contingent was now deserting at a tremendous rate, with over 3,500 of them fleeing before the war ended. It seemed pointless to retain the remaining Albanians, and they were demobilised. This so-called 'Albanian Volunteer Mountain Division' was in fact now manned predominantly by German sailors.

Retaining the division as an independent unit was no longer feasible, and the German cadre personnel were, in the main, posted to the 'Prinz Eugen' Division. Despite the division's poor record and its short lifespan, a full range of insignia was initiated, including collar patches, armshields and cuff bands.

This particular unit was raised in mid-1944. The officers were mostly Reichsdeutsche from Hungary, though a small number of reliable Moslem officers from the 'Handschar' Division also served. The rank and file were made up of, predominantly Moslem, volunteers. The unit was never actually fully formed and at its peak it reached a maximum strength of just under 9,000 men.

While the division was still working up, it came under threat from the advancing Red Army and the decision was made to allow the rank and file Moslem volunteers to disband and return to their homes. The German cadre personnel were posted to 31.SS-Freiwilligen-Grenadier-Division Böhmen-Mähren and the Moslems who wished to remain in service were transferred to the Handschar Division.

By October 1944 it had been struck from the Order of Battle of the Waffen-SS and its number had been allocated to a Dutch volunteer division which itself never reached greater than regimental strength and was annihilated in the fighting around Berlin in May 1945.

This unit originated in the summer of 1942, when Himmler ordered the raising of a mountain troop company to fight in the highest areas of the bare rocky mountainous area on the border between Italy and Yugoslavia. Very soon afterwards the company was expanded to battalion strength. The recruits were mostly local men with extensive knowledge of these mountains.

The Karstjäger (the term 'Karst' refers to the bare, rocky areas in the highest peaks of this mountain region) Battalion was used extensively in anti-partisan operations against the predominantly Communist Italian partisans in the area around Trieste in north-east Italy.

In July 1944 the battalion was ordered to expand to a division. Based in Udine, it was to comprise predominantly Reichsdeutsche from the South Tyrol as well as the original local Italian volunteers. There were problems raising sufficient manpower, and by the end of 1944 it had been decided that a brigade-sized unit might be more feasible; however, even that proved difficult to achieve.

In the closing stages of the war Waffen-Gebirgsjäger-Regiment der SS 59 was heavily engaged in combating elements of the British 8th Army as well as fending off attacks from Italian partisans. It suffered heavily, but fought on determinedly and performed well in difficult circumstances.

SS-Brigadeführer Otto Kumm, commander of the 7.SS-Gebirgs-Division 'Prinz Eugen' and bearer of the Knights Cross with swords and oakleaves, 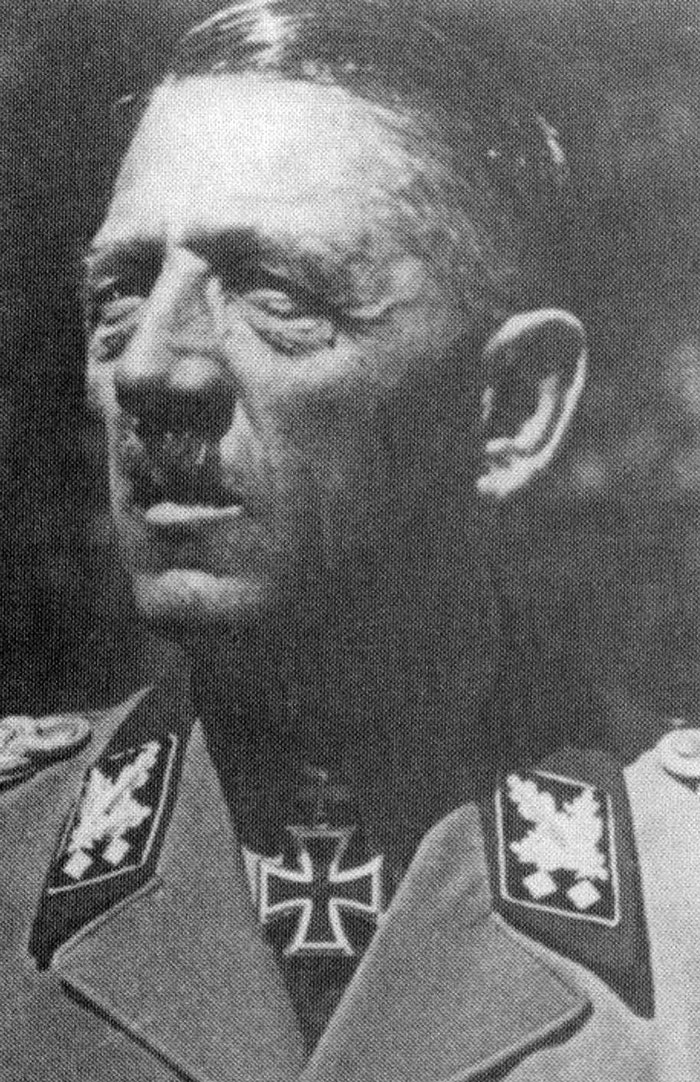 SS-Obergruppenführer Artur Phleps, former general in the Romanian army, mas first commander of the 'Prinz Eugen' division, which he ted until his death, in 1943.

The remnants of the unit were combined with elements of the 'Prinz Eugen' Division and personnel from the SS-Junkerschule at Klagenfurt in a Kampfgruppe under the command of SS-Brigadeführer Heinz Harmel.

When the bulk of the German forces in Italy surrendered, units in the same area made haste to surrender to the British rather than to the Communist partisans. Harmel and his Kampfgruppe, however, dug in and continued to fight, covering the withdrawal of further German units from Yugoslavia; this certainly saved many German soldiers from falling into the hands of Tito's partisans.

The Karstjäger of the Waffen-SS were among the very last soldiers of the German armed forces to lay down their arms: they finally surrendered to the British on 9 May 1945."