This elite division was formed in autumn 1940 and for most of its life was commanded by the popular and charismatic Julius 'Papa' Ringel. Although its home base was in Salzburg, Austria, 5.Gebirgs Division personnel were predominantly Bavarian.

Its first few months were spent training in the Bavarian Alps; it then moved to the Balkans theatre, where it played a prominent part in the smashing of the Metaxas defence lines and the subsequent defeat of the Greek and Commonwealth forces.

Within weeks of the successful conclusion of the campaign in Greece, Ringel's Gebirgsjäger were to become part of the German assault force launched against the island of Crete. During the Battle of Maleme, these tough mountain troops came to the aid of the beleaguered Fallschirmjäger in what was to become the turning point of the operation on Crete.

From late summer 1941 to March 1942 the division was allowed a period of rest and refitting. However, it soon returned to battle, this time on the Eastern Front, where it was attached to Heeresgruppe Nord, serving in the Volkhov region on the Leningrad front. It remained in this sector until the end of 1943, distinguishing itself on a number of occasions. 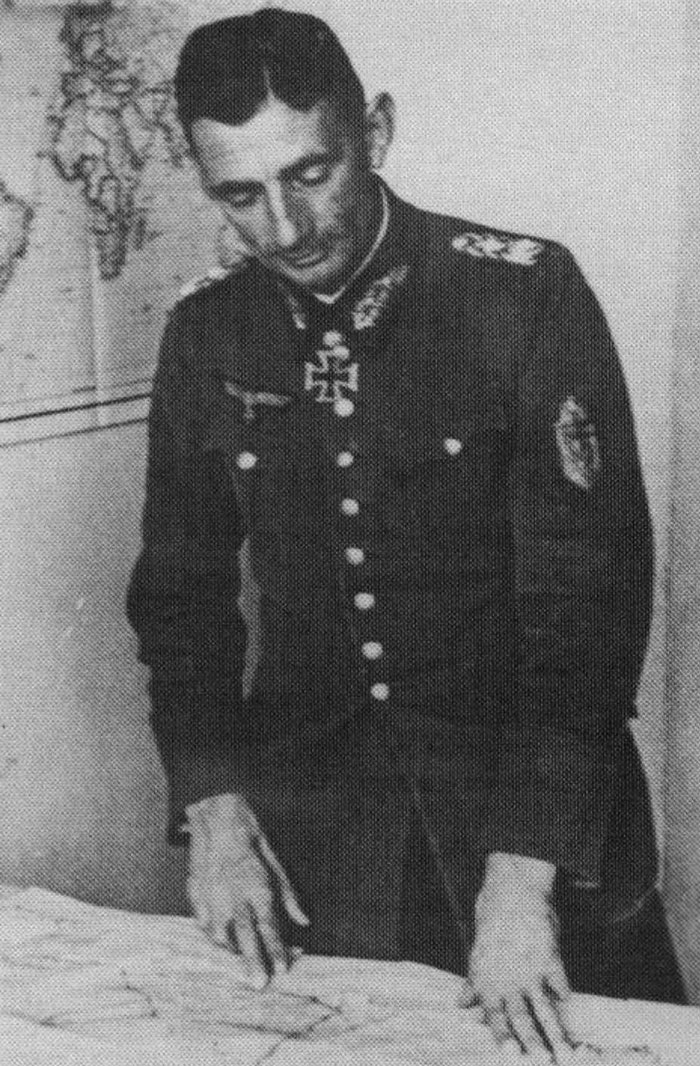 General Eduard Dietl after the Battle of Narvik. Note the Narvik Shield worn on the left sleeve of his pre-war pattern General's service tunic. The knights Gross with Oak leaves is also being worn. (Josef Charita)

In December 1943 the division was transferred to Italy under the control of 10.Armee. It took part in the fighting retreat up the 'leg' of the Italian mainland, distinguishing itself yet again during the battles for the Gustav and Gothic defence lines. Towards the end of the war, it was fighting in the border region between Italy and France, and eventually surrendered to American forces in April 1945. 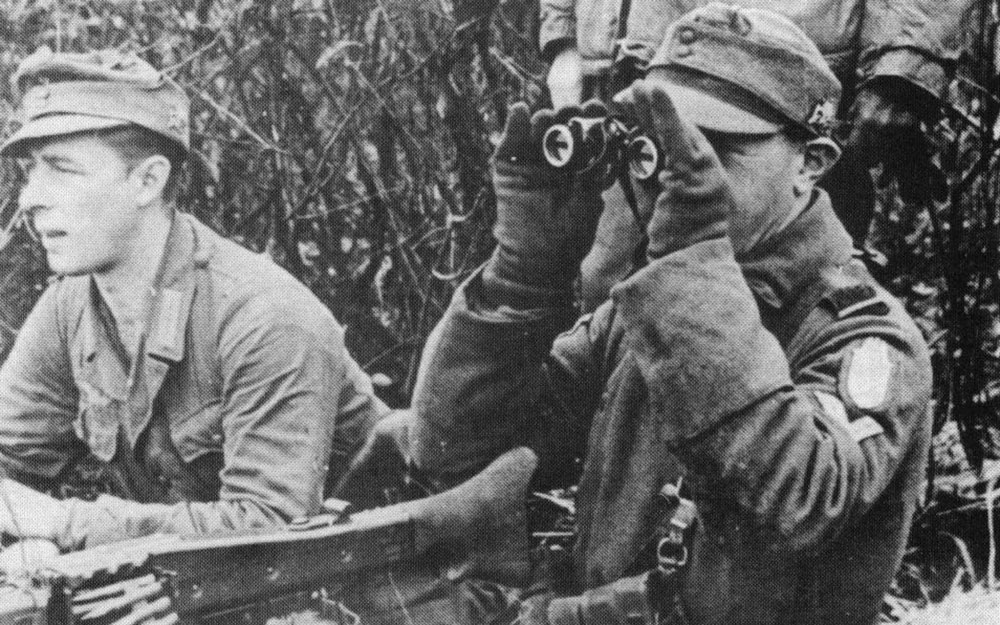 A Gebirgsjäger MG42 machine-gun team on the Eastern From. Although the soldier to the left wears a lightweight summer issue tunic, the Obergefreiter with binoculars wears a heavy wool greatcoat. The latter is a veteran of the battle for Narvik. (Josef Charita)

Formed in 1940, this division began its war in occupation duties in France, before being transferred to 12.Armee in Poland. When the Balkan campaign began, the division moved south, taking part in the brief campaign against Greece and in particular in the smashing of the Metaxas line. Although some elements may have taken part in the Crete operation, the bulk of the division stayed on in Greece as part of the occupation force, before being moved to Norway in September 1941.

As part of Gebirgskorps Norwegen, it took part in the drive into Russia, towards the port of Murmansk. It remained in the far northern sector of the Russian front until late 1944, when the Finns reached a separate surrender agreement with the Soviets. At this point it withdrew back into Norway, where it surrendered to the British at the end of the war. 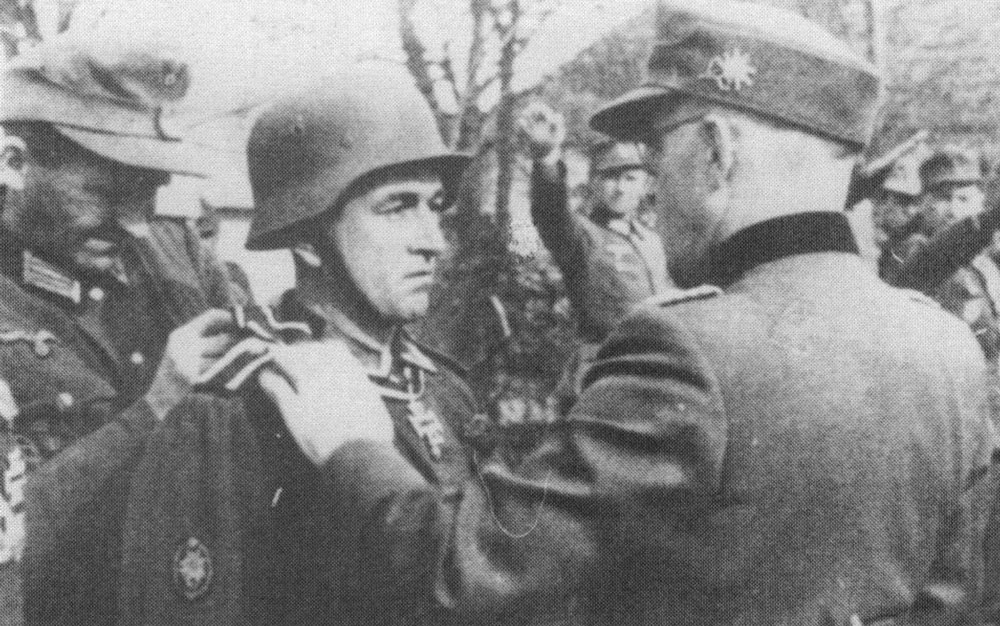 A fine portrait study of Oberst Wolf Hagemann, who was awarded the Knights Cross of the Iron Cross on 4 September 1940 as a major in command of III Batallion, Gebirgsjäger-Regiment 139. He later won the Oak-leaves, on 4 June 1944, while on the Eastern Front. The Gebirgsjäger arm patch and Narvik shield are clearly visible. (Josef Charita) 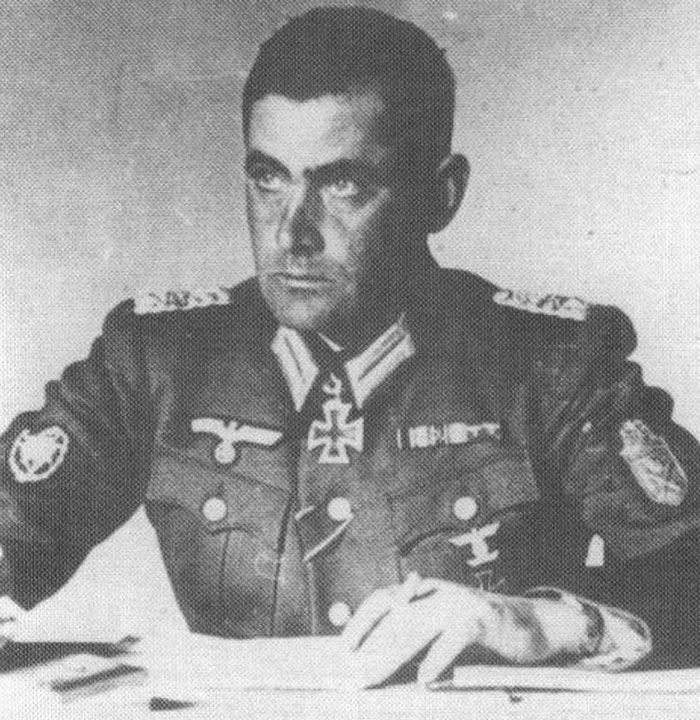 This photo shows Generalleutnant Kubler making the award of the Knights Cross of the Iron Cross to Unteroffizier Georg Audenrieth. The Gebirgsjäger arm patch on Audenrieth's sleeve is clearly visible. (Josef Charita)

This formation was originally intended as a Jäger unit: it was formed in 1940 as 99.Jäger Division, and served as such on the southern sector of the Eastern Front. In the winter of 1941/42 it was withdrawn from the front and returned to Germany, where it was re-formed as a Gebirgs division. In earls 1942, as 7.Gebirgs Division, it returned to action, rejoining the front in Finland.

This division remained in this sector until the Finns concluded their peace negotiations with the Soviets, at which point it withdrew through Lapland into Norway and became part of XVIII Gebirgskorps. In 1945 it was supposed to be returning to Germany to aid in the defensive battles there, but the war ended before the transfer could be made. The division surrendered to the British in Norway.

Part of a Gebirgsjäger regiment moves through the snows of a Russian mountain pass. Note that all wear the Bergmütze and cany heavily laden rucksacks. To the rear of the column are some of the unit's pack mules carrying heavy equipment. (Ian Jewison)

Not a great deal is known about this particular unit. It was formed in 1942 in Norway and is believed to have comprised 142. and 144.Gebirgs-Infanterie Regiments and Gebirgs-Artillerie Regiment 124, presumably with the usual Panzerjäger, Pionier and Nachrichten support units. It is not believed to have reached full strength, but saw action in the far north of the Eastern Front until late 1944, when it was transferred to Italy and saw action in the Po Valley area. At this time it numbered only around 3,000 men, and was on the Order of Battle of 10.Armee. It surrendered in Italy in April 1945. 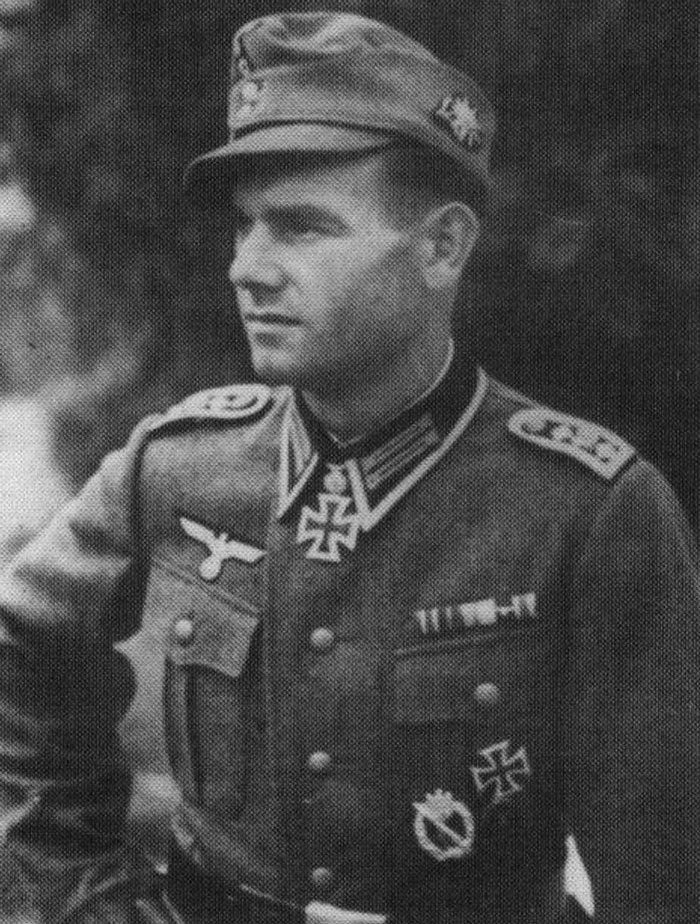 Oberfeldwebel Rudolf Schlee, a platoon leader in 6.Kompanie, Gebirgsjäger-Regiment 13. Having won the Knights Cross of the Iron Cross in October 1941, Schlee went on to win the coveted Oakleaves on 6 April 1943. Note the infantry assault badge, the combat award most commonly won by Gebirgsjäger. His metal Edelweiss badge has been backed with dark green cloth, a popular fashion in some units. (Josef Charita)

The confused situation in the closing stages of the war led to two divisions being allocated this same number. The first 9.Gebirgs-Division was in fact only of Kampfgruppe strength, and was commanded by Generalmajor Krautler. It was formed in Norway from troops who had taken part in the retreat through Finland, and surrendered to the British in 1945. The second unit was also merely a small battle group, Kampfgruppe Semmering, formed to defend the Semmering Pass in Austria from the advancing Soviets. An ad hoc unit, it included personnel from the Gebirgs-Artillerie Schule in Dachstein, the SS-Gebirgs-Ersatz Batallion-Leoben and even redundant Luftwaffe personnel from Jagdgeschwader Boelke. Officially it formed part of III Panzerkorps, in 6.Armee. By the end of the war, the unit had become fragmented; some managed to escape westwards into the American zone; others were less fortunate and went into Soviet captivity.

This unit originated as a reserve division used principally for training Gebirgsjäger, who would then be posted on to one of the other Gebirgs divisions. In the latter part of 1944 it was redesignated to the status of a full Gebirgs-Division and saw limited service in the Balkans before being swallowed up in the collapse of the Eastern Front in 1945. Its commander was Generalleutnant Wilhelm von Hosslin.

This unit was created in late 1943. It was initially a brigade, but was expanded to become a division in Bavaria in mid-1944. Its principal units were Ski-Jäger Regiments 1. and 2., together with the usual Pionier, Nachrichten and Panzerjäger elements. The division was first committed to battle in the central sector of the Eastern Front in the summer of 1944, and took part in the fighting retreat towards the Vistula. Later in the year it was moved to Czechoslovakia, but went north into Poland before the end of the year. By the end of the war it was back in Czechoslovakia, where it surrendered to the Russians in May 1945.

The division was commanded by Generalleutnant Gustav Hundt (1944-45).

Apparently the Germans did not consider that the division had been particularly successful, as no attempt was made to create a second Ski-Jäger division. However, ten of the division's personnel performed with sufficient distinction to receive the Knights Cross of the Iron Cross. 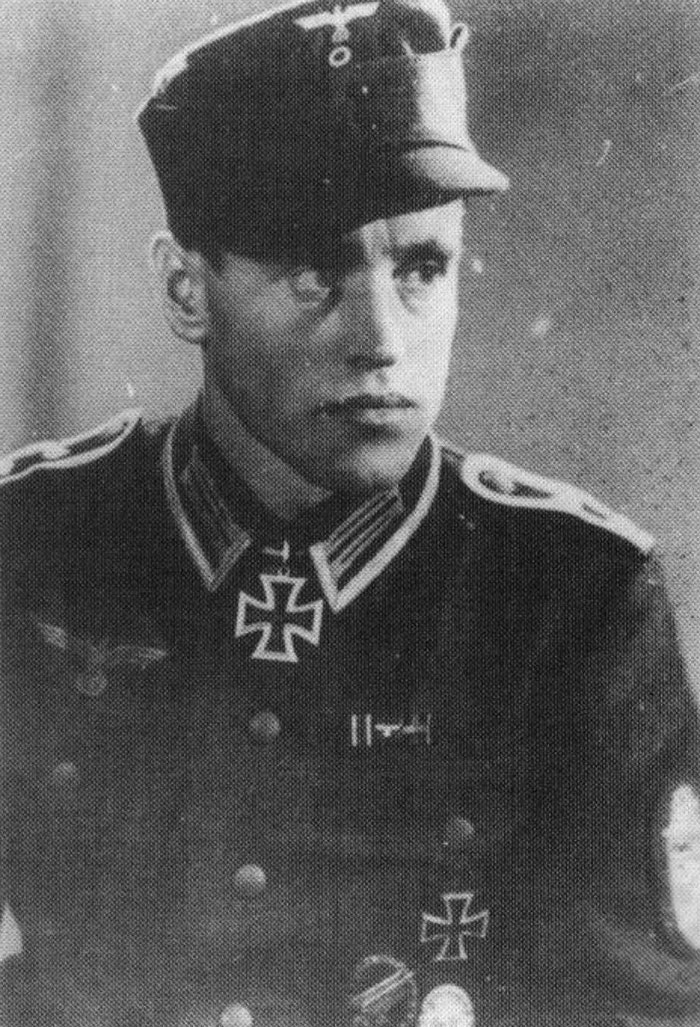 Oberfeldwebel Adam Ebner, a Knights Cross winner from 3. Kompanie, Gebirgsjäger-Regiment 137. A veteran of Narvik, he is also a qualified paratrooper, evident from the Fallschirmschutzenabzeichen on his left breast pocket. (Josef Charita)

Mention should also be made of the Hochgebirgsjäger battalions. Four were formed, and it was intended that they would operate in the very highest mountain peaks. However, it was subsequently decided that there was no real need for such highly specialised units within the Gebirgsjäger arm, and the personnel were distributed to the mainstream Gebirgs divisions. Before their disbandment, however, Battalions 1 and 2 saw action on the Eastern Front, while 3 and 4 saw action in Italy. Hochgebirgsjäger-Batallion 3 performed exceptionally well, seeing service at Monte Cassino, and one of its soldiers received the Knights Cross of the Iron Cross for gallantry. 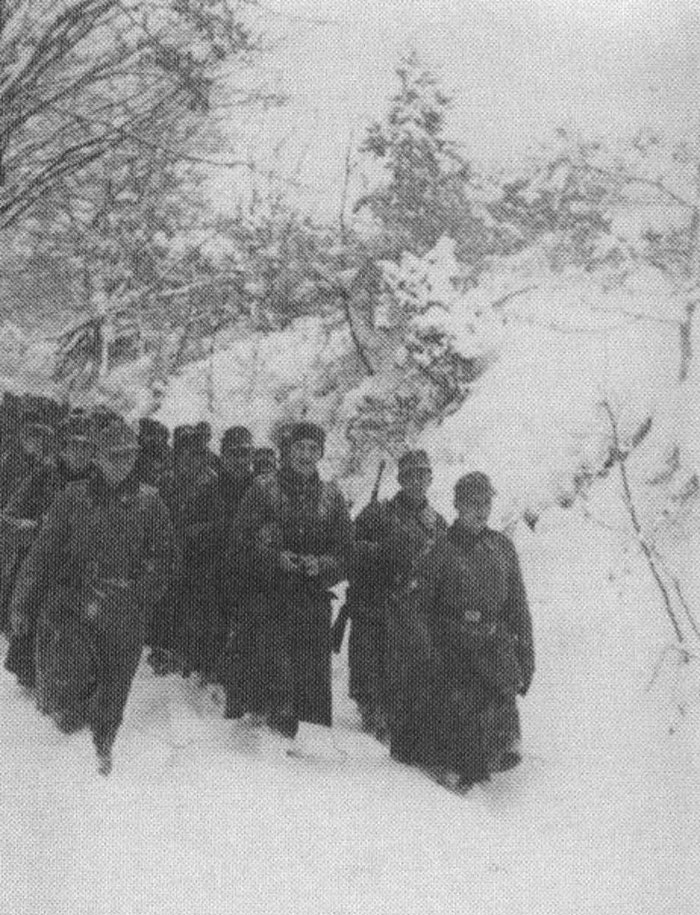 Gebirgsjäger trudging through the heavy snow on the Eastern Front in the winter of 1942/43. All are wearing the greatcoat and are armed with the basic weapon of the German infantry, the Manser Kar98k carbine. (Josef Charita )

First created as Kampfgruppe Word' in early 1941 from Totenkopfstandarten 6 and 7, to which were added the Nachrichtenabteilung from the SS-Verfügungsdivision, the unit first saw action in the far north sector of the Eastern Front, and took part in the unsuccessful drive towards Murmansk.

The Kampfgruppe was upgraded to divisional status in late 1941, and was recruited from a mixture of both German (Reichsdeutsche) and ethnic German (Volksdeutsche) personnel. 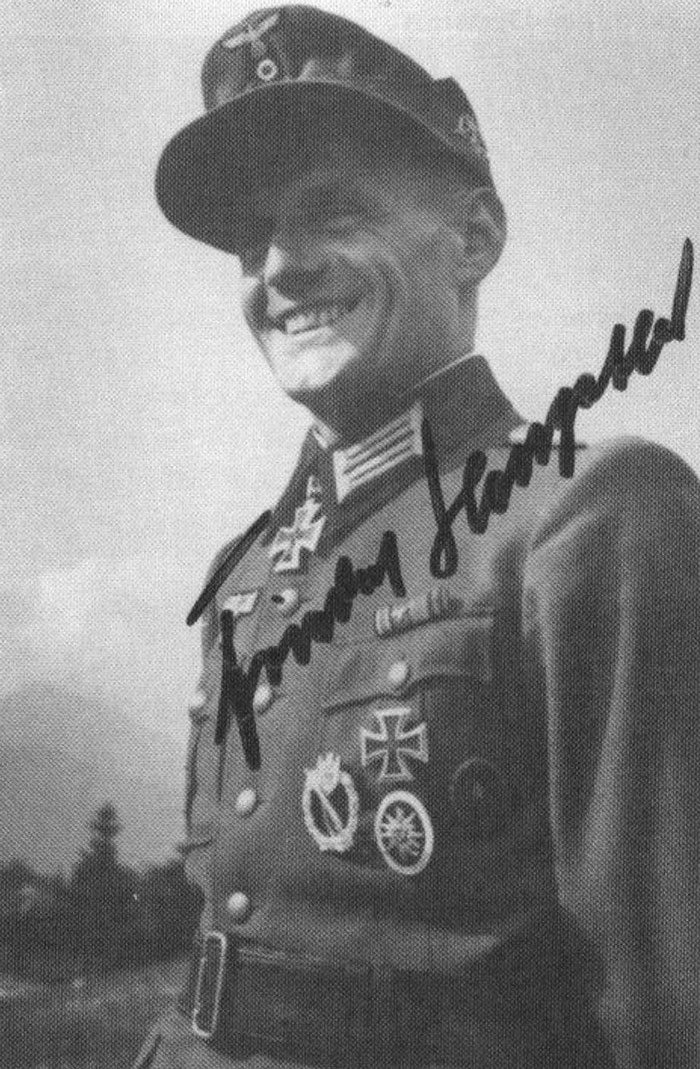 Friedrich Hengstler, shown here as a lieutenant, won the Knights Cross of the Iron Cross as an Oberfeldwebel in Gebirgsjäger Regiment 98. Of particular interest is the Heeresbergführer budge on the left breast pocket. (Josef Charita)

It did not fare particularly well in its early period on the Eastern Front. The terrain was dark, damp swampland and forests and the unit suffered heavy casualties at the hands of the Soviets. Some of its soldiers are said to have fled in panic during one Soviet attack and that the situation was only saved by Wehrmacht and Finnish units on its flanks.

Nevertheless it remained on this sector of the front until September 1944, and while it was there was re-formed as a Gebirgs-Division. As part of XVIII Gebirgskorps, it took part in the retreat through Lapland into Norway, forming part of the corps' rearguard.

In late 1944 it was withdrawn from Norway and shipped to Denmark, whence it joined the German forces on the Western Front. Fragmented during the transfer, the first units to arrive were formed into a battle group, SS-Kampfgruppe 'Nord', which took part in the closing stages of the Ardennes offensive. Joined by the remainder of the division, it fought in the retreat through the Saarland and acquitted itself much better here than it had on the Eastern Front. It put up a pugnacious defence against powerful American attacks, but was finally fragmented by overwhelming Allied superiority in numbers.

Scattered elements from the division attached themselves to other SS units and continued to light to the bitter end. The last remaining divisional elements surrendered to the US army in Bavaria at the end of the war.