Although reference to the elite units of the German armed forces in the Second World War usually brings to mind troops such as the Fallschirmjäger, the Panzertruppe or the Waffen-SS, there is one much neglected branch of the front line fighting forces which deserves the accolade 'elite' as much as any other: the mountain infantry of the Gebirgstruppe. 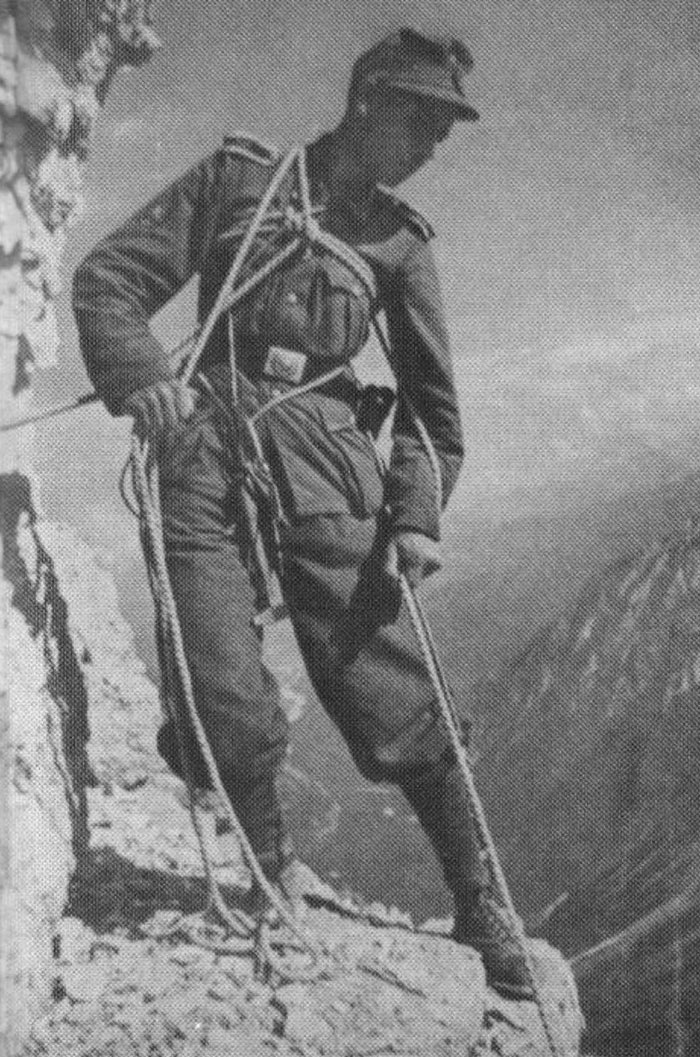 In Unteroffizier of Gebirgstruppe during a climbing exercise. Note the Bergmütze and M36-pattern field blouse. He wears the mountain-boots and puttees. (Josef Charita)

To the Germans, the Gebirgsjäger, or mountain infantryman, was a relatively new member of the fighting forces, dating back only as far as 1915, when the first mountain troop units were formed in Bavaria. They comprised battle-hardened soldiers from the states of Bavaria and Württemberg. They acquitted themselves superbly well in battle, under officers of the calibre of the young Erwin Rommel (he won his Pour-le-Merite while commanding a mountain troops unit).

After the end of the First World War a hard core of experienced mountain troop personnel was retained by the army of the Weimar Republic, so that when Hitler repudiated the Treaty of Versailles, in 1935, and set about rebuilding the German Army, the nucleus of the first new Gebirgs division was already to hand.

The Anschluss with Austria, in 1938, saw many trained and experienced mountain troops from the Austrian Army, which had a much longer history in mountain warfare than Germany, flow into the Wehrmacht. Indeed, their numbers were sufficient to constitute two new Gebirgs divisions.

Gebirgsjäger were basically light infantry, trained for mountain warfare. The type of terrain in which they operated dictated that the support elements available to traditional infantry divisions, such as heavy artillery, armoured vehicles, and even tanks, could not be used by the Gebirgsjäger. Apart from some lighter calibre artillery and howitzers, usually of a type which could be disassembled and carried by pack mules, the Gebirgsjäger fought principally as infantry assault formations, and it was in this role they excelled.

The typical Gebirgsjäger was a supremely fit individual. Not only was he often obliged to carry a considerable amount of personal kit around with him in his rucksack (kit which the divisional baggage train would usually carry for the traditional infantryman), but he was also expected to scale mountains while doing so. 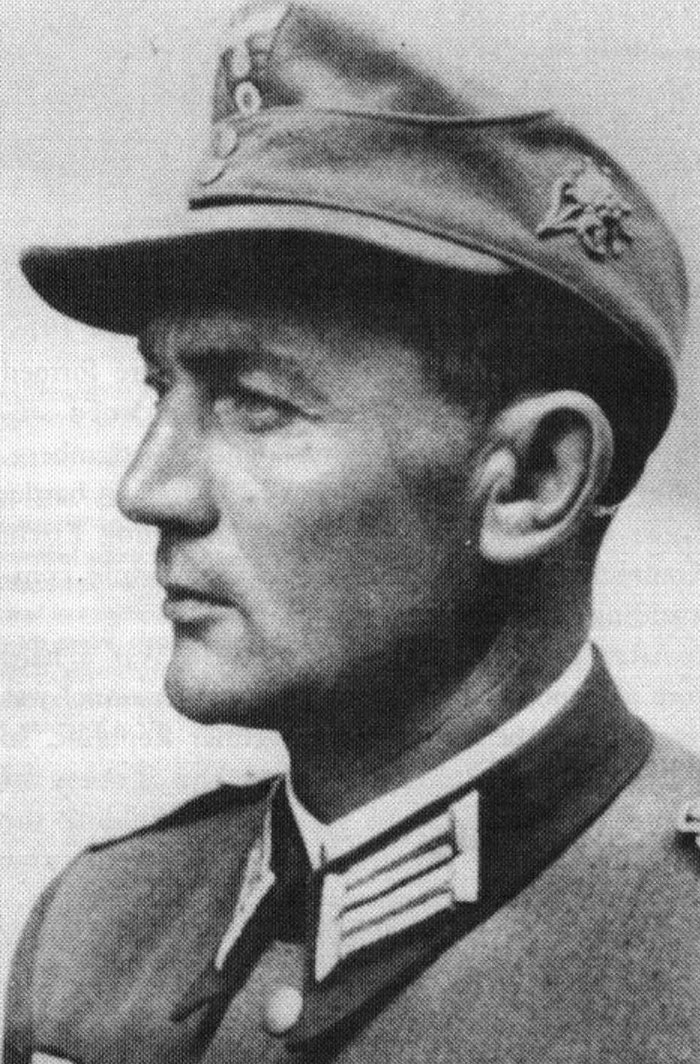 Gebirgsjäger Major Karl Eisgruber. Note the metal Edelweiss insignia of the left side flap of the cap and the typical two-button fastening. The Waffenfarbe colour strips to the centre of each bar of the collar patch are in light green. (Josef Charita)

Later in the war, these superbly trained troops often found themselves, like their Fallschirmjäger contemporaries, thrown into the line as ordinary infantry, far from their beloved mountain environment, and they frequently suffered as a result.

Morale and esprit de corps in mountain troop units was almost universally very high, and commanders such as Eduard Dietl, the 'Hero of Narvik', or Julius 'Papa' Ringel were idolised by their men. When in their element the high mountain peaks of Norway or the Caucasus the Gebirgsjäger fought with an élan and determination which were second to none.

It is interesting to note that the first soldier of the Wehrmacht to be awarded the coveted Oakleaves to the Knights Cross of the Iron Cross was a Gebirgsjäger, Generaloberst Eduard Dietl, whose name was adopted by the training school of the Gebirgsjäger of the present day German Bundeswehr, the 'Dietl Kaserne'.

This division was formed in April 1938, and was based in Garmisch, Bavaria; its parent Wehrkreis, or military district, was Wehrkreis VII. After the Anschluss with Austria, in 1938, a number of Austrian personnel were also taken on in strength. The division had originally featured a third Gebirgsjäger Regiment, the 100th, which was transferred to 5.Gebirgs Division in 1940. As part of XIV Armee, it took part in the invasion of Poland, capturing the Dukla Pass in the Carpathian mountains. It also performed with distinction during the attack on France and the Low Countries in 1940, at the crossings of the Maas and Loire rivers, and took part in the invasion of Yugoslavia.

In the summer of 1941, 1.Gebirgs Division was part of Hitler's invasion force which poured over the borders of the Soviet Union. It was attached to Heeresgruppe Sud and saw action at the Uman Pocket, Kiev, Stalino and at the crossing of the Dnieper.

In the spring of 1942, 1.Gebirgs Division fought as part of 1.Panzerarmee in the Donets area. That summer it spearheaded the drive into the Caucasus and remained in that area until 1943. It took part in the defensive battles in southern Russia after the debacle at Stalingrad, until March 1943, when it was withdrawn into Greece. There it was held as part of the Oberkommando der Wehrmacht's strategic reserve, spending its time engaged in anti-partisan duties until April 1944, when it was despatched to Hungary. It was briefly withdrawn from the front in August, but returned to Hungary in the December as part of 2.Panzerarmee for the last great German offensive in the cast, around Lake Balaton (the Platensee). 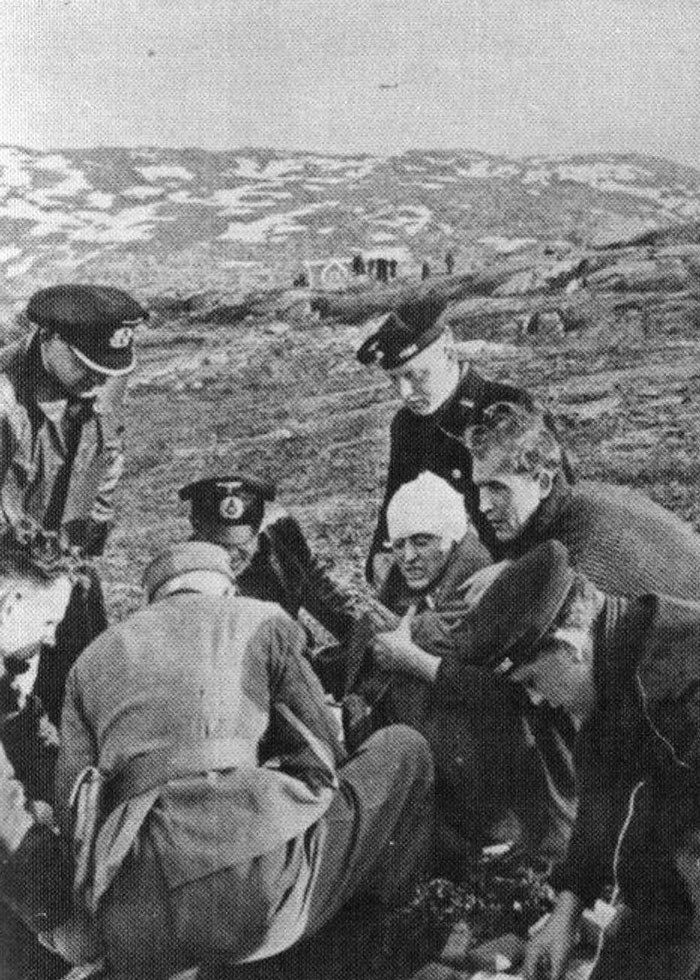 A mixed group of Gebirgsjäger and Kriegsmarine sailors from the sunk German destroyer flotilla in the hills above Narvik in 1941).

A combined forces group during the battle for Narvik, comprising Kriegsmarine, Luftwaffe and Gebirgsjäger personnel.

Towards the end of the war it was renamed 1.Volks-Gebirgs-Division; and it found itself fighting in the south-eastern part of Austria when the war ended. Its personnel went into Soviet captivity, and many never returned. 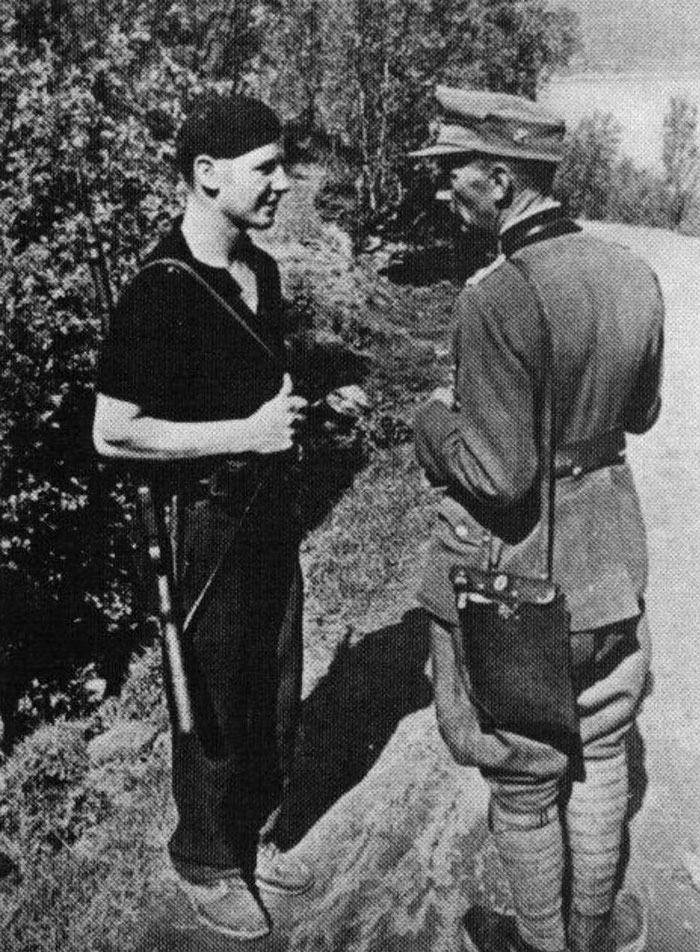 A German sailor, his vessel sunk" or beached, has joined the fight alongside his Gebirgsjäger colleagues, and is seen here reporting to General Dietl.

The 2.Gebirgs Division home-base was in Innsbruck, Austria, Wehrkreis XVIII. This was one of the divisions formed primarily from Tyrolean Austrians after the Anschluss. When war broke out the division served as part of Heeresgruppe Sud in the Polish campaign. It subsequently took part in the invasion of Norway, fighting in the Narvik area in support of 3.Gebirgs Division, which was under considerable pressure from British units. It then spent some time on occupation duties in the far north of Norway and in Lapland.

On the opening of Operation Barbarossa, in June 1941, the division became part of XIX Gebirgskorps in 20.Gebirgsarmee and took part in the drive towards Murmansk. It served in this corps in the same theatre until late 1944, when the Finns concluded their own peace agreement with the Soviet Union, and the German units in Lapland withdrew into Norway. The division suffered badly during the Russian winter offensive of 1944-45.

A transfer to the Western Front followed, and the main combat regiments were rebuilt and reinforced, though the quality of the replacements did not match that of the division's original complement. It joined Heeresgruppe G at the front in February 1945 and took part in the lighting for the Saar and Moselle areas before retreating into southern Germany where it joined XII Korps. Their battered remnants surrendered to the Americans in May 1945. 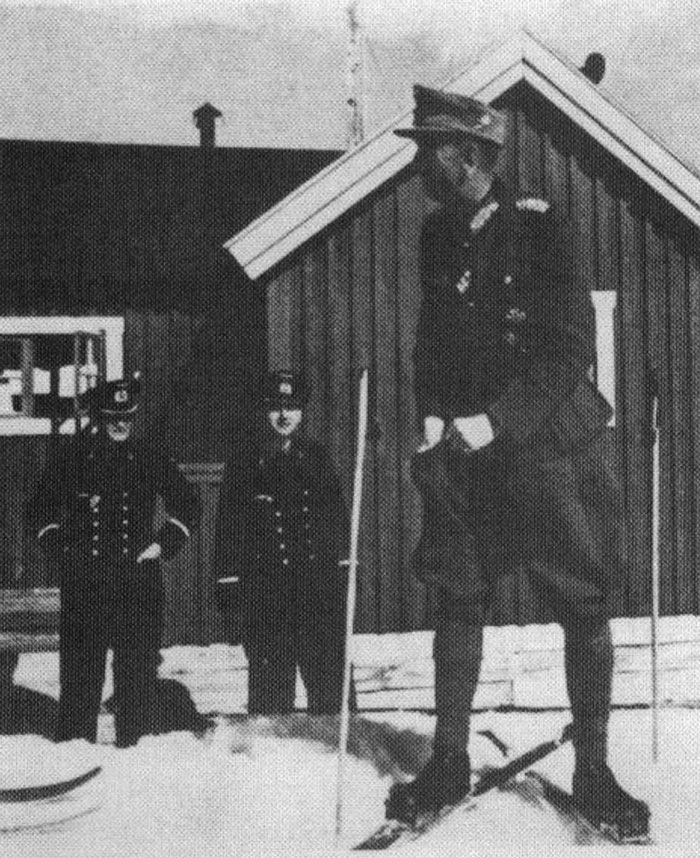 General Dietl, watched by two Kriegsmarine officers, is about to take to his skis on the hill above Narvik. Note the puttees and mountain-boots, the wide red generals' stripes can just be seen on his breeches on the original print. His tunic is a generals' version of the M36-style field blouse.

This division was formed by the amalgamation of the former Austrian 5. and 7.Gebirgs divisions after the Anschluss. On the outbreak of hostilities in 1939, the division was part of XVIII Korps of 14 Armee, one of the constituent units of Heeresgruppe Sud, and took part in the successful Polish campaign. Thereafter it was transferred to the Western Front, and in March was withdrawn from the front to prepare for its part in the forthcoming campaign in Norway.

It was chosen as the spearhead unit of the invasion force at Narvik in April 1940. One of the division's regiments, the 138th, was detached to capture Trondheim, leaving the force which took Narvik seriously weakened, and when the British expeditionary force arrived at the port, the division found itself in the midst of some very bitter fighting. It was a close run thing, and Dietl admitted that he had considered withdrawing his battered troops over the border into Swedish internment. However, the division fought on determinedly, and finally won the day, but only after over two months of heavy fighting.

The 3.Gebirgs Division subsequently took part in the opening stages of the invasion of the Soviet Union, during the drive from northern Finland towards the port of Murmansk. It remained in this sector until autumn 1942, when it was moved to the southern sector of the front, which was coming under severe pressure from Soviet counter-attacks. It took part in the attempt to relieve 6.Armee at Stalingrad. 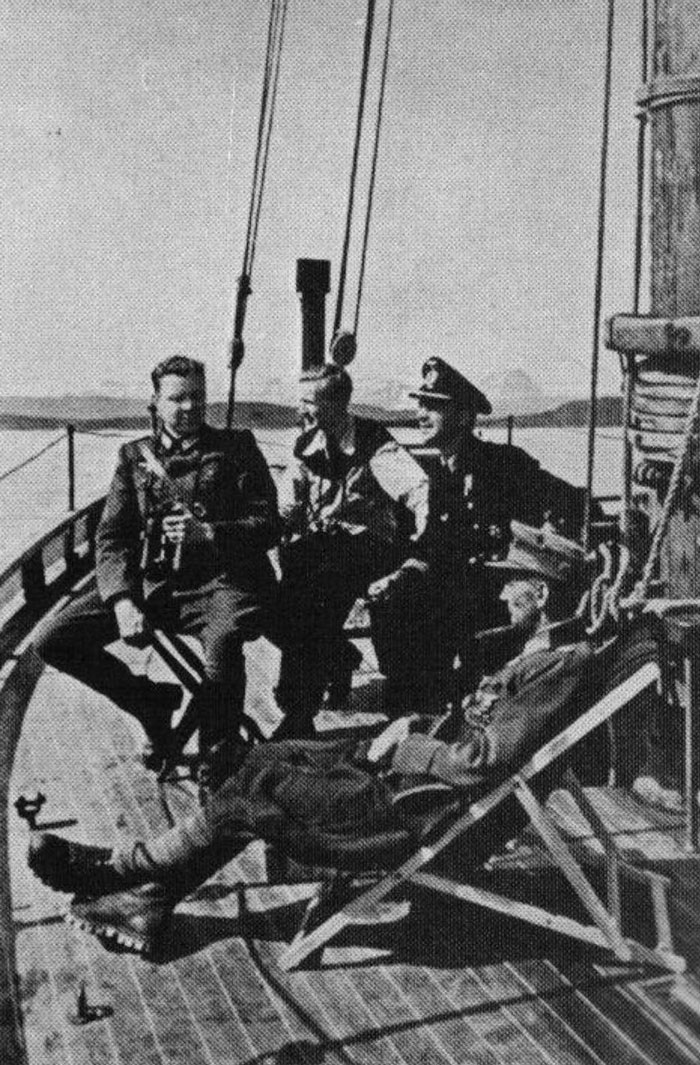 After the successful conclusion of the Narvik battle, General Dietl relaxes with some fellow officers aboard a Norwegian fishing bout. The heavily studded soles of his mountain-boots are clearly visible.

The division then fought in the defensive battles in the Ukraine, before withdrawing through Hungary into Czechoslovakia, where it became part of XXXXIX Panzerkorps. It was in action in Upper Silesia when the war ended, and it surrendered to Soviet forces. 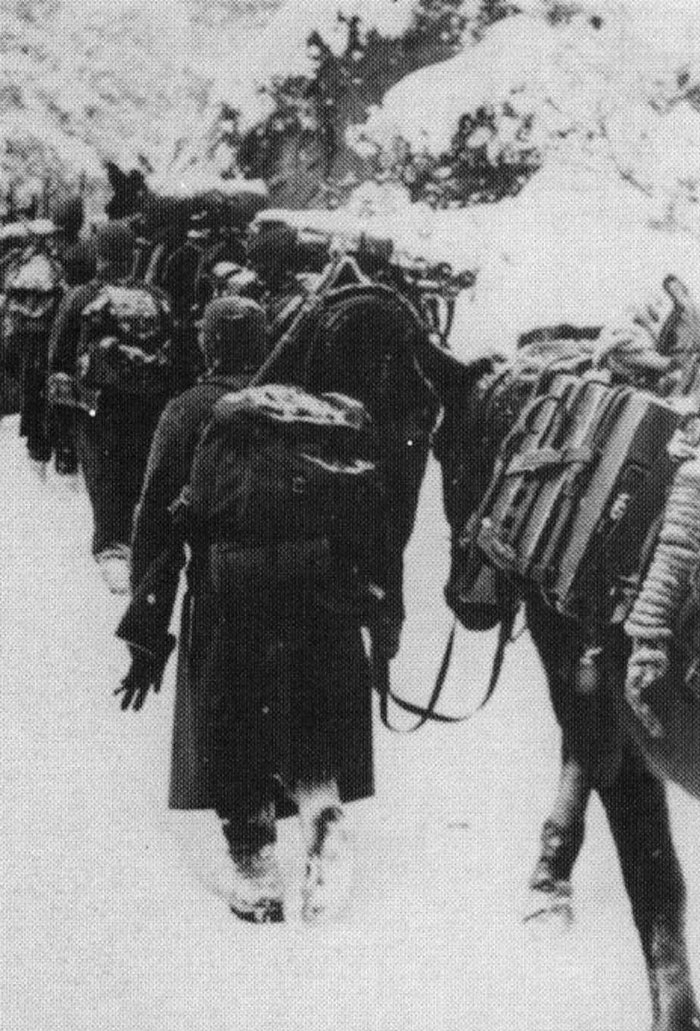 A troop of Gebirgsjäger heading into the mountains with their heavily laden pack mules. The Gebirgsjäger are all wearing greatcoats and carrying the large issue rucksacks. (Ian Jewison)

This division was newly formed in 1940; its home area was Wehrkreis IV, which covered Saxony and parts of Prussia and Silesia. It comprised mostly German, rather than Austrian, personnel, with drafts from other units including 25. and 27.Infanterie Divisions.

The division was in training until the spring of 1941, when it became part of 12.Armee for the attack on Yugoslavia. After the successful conclusion of the Balkan campaign it then became part of 17.Armee in Heeresgruppe Sud for the invasion of the Soviet Union. Taking part in the advance towards the Volga, it fought in the battles at Uman, where it suffered heavy casualties.

In the German summer offensive of 1942 the division struck into the Caucasus mountains and fought with some distinction, becoming involved in the containment of the attempted Russian landings at Novorossisk in the Kuban bridgehead. In 1944, having taken part in the ferocious battles around the Dnieper Bend, it received a commendation from Generalfeldmarschall von Manstein for the part it had played in the destruction of the Soviet 1st Tank Army.

In late 1944 the division withdrew across the Carpathian mountains into Hungary, and was involved in the fighting retreat into Czechoslovakia and Austria, ending up as part of l.Panzerarmee. By the end of the war this once powerful division had been reduced to a Kampfgruppe; it surrendered on 9 May 1945. 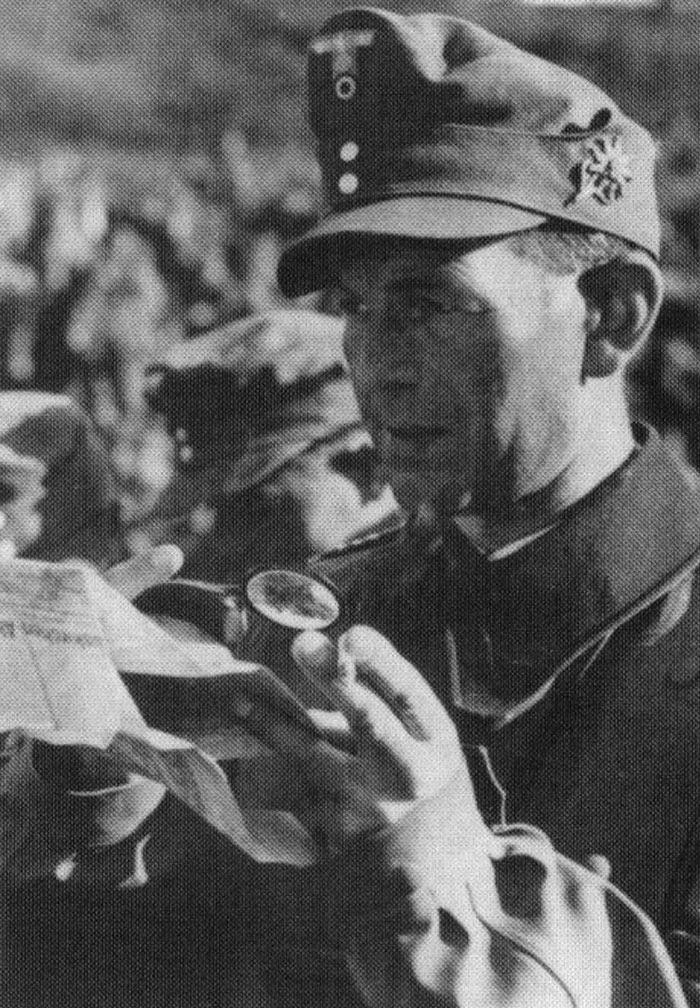 The Bergmütze can be seen to particularly good effect on this shot. Note the typical high crown and short peak. The officer shown here is wearing the issue raincoat. (Josef Charita)