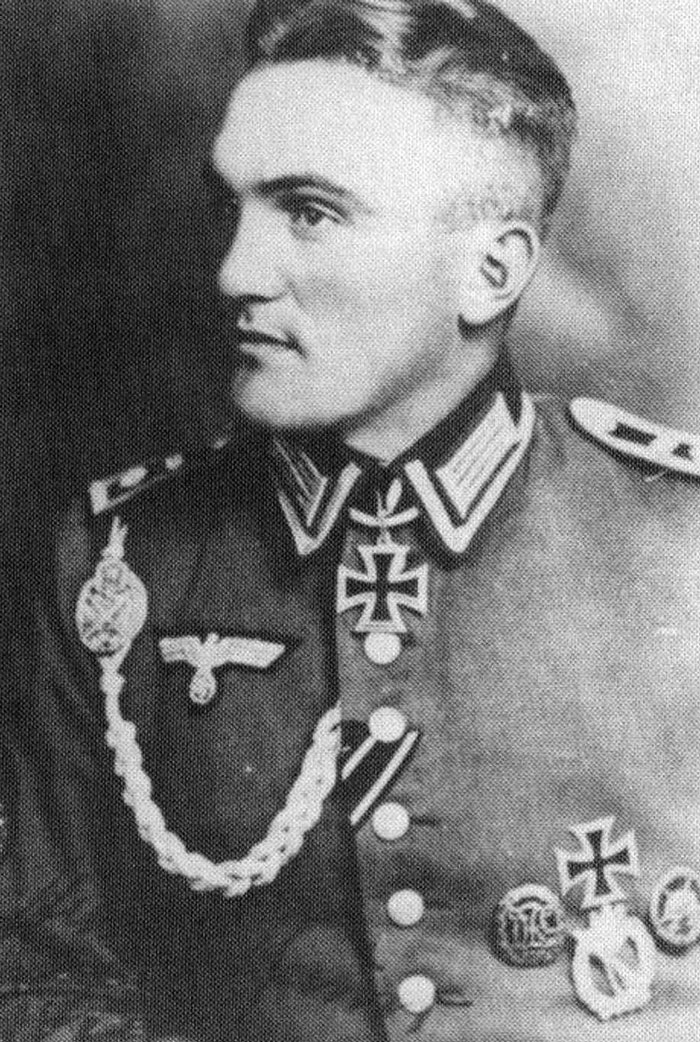 Feldwebel Johann Bauer wears an altered Waffenrock parade dress tunic, together with the marksmanship lanyard. Sole the lack of pockets to this tunic. This photograph was taken after the wearing of the Waffenrock had ceased. Bauer appears to have modified his for walking out dress. On the normal Waffenrock the NCO braid to the collar would run along the upper rather than lower edge. (Josef Charita) 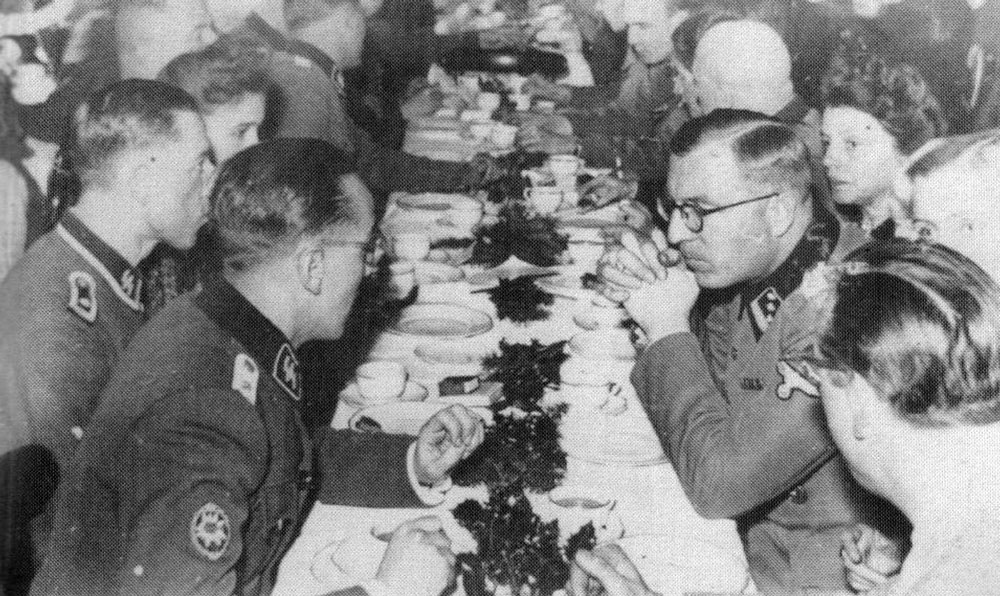 On the left is tin SS-Obersturmführer from SS-Sturmbrigade 'Wallonie'. Note the army - rather than Waffen-SS-pattern sleeve Edelweiss. (Josef Charita)

In the organisation of German military units in the Second World War, the divisions usually operated as part of a corps, together with at least one other division. The corps usually had its own permanent staff elements, plus support in the form of transport, signals, military police and so on. While the corps structure could be semi-permanent, the divisions controlled by the corps could vary, so that the typical corps headquarters would control two combat divisions, but not always the same two divisions.

The following corps were established to control Gebirgsjäger units of ihe German armed forces in the Second World War:

V SS-Gebirgskorps Formed in summer 1943 and engaged primarily in anti-partisan operations in the Balkans before being withdrawn into Germany and being destroyed in the battle for Berlin.

IX SS-Gebirgskorps Formed in early 1944 in Croatia; operated in Hungary and was destroyed in the battle for Budapest.

XV Gebirgskorps Formed in summer 1943 and operated in the Balkans; was responsible for the defence of the Dalmatian coast.

XVIII Gebirgskorps Formed in 1938 in Austria and served in the Polish and Western campaigns, the 1941 Balkan campaign and ended the war in the far north of the Eastern Front. 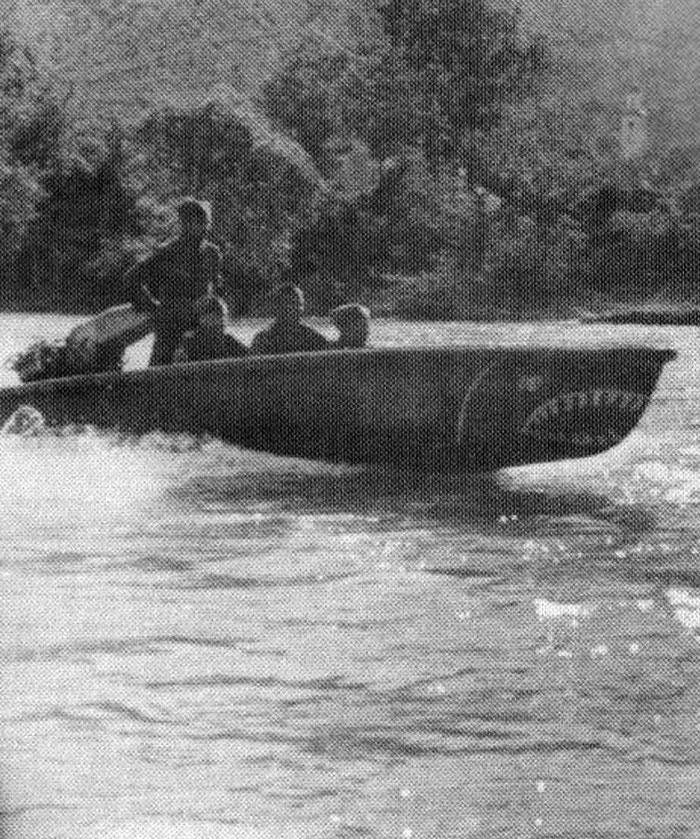 SS-Gebirgsjäger manning a fast assault boat in the waters of an unidentified river in Yugoslavia in 1943/44. Note the shark's-teeth motif painted on the bow of the boat. (Josef Charita)

XIX Gebirgskorps Formed in 1940 and originally entitled Gebirgskorps Norwegen; operated solely on the far northern sector of the Eastern Front; withdrew into Norway at the end of the war.

XXI Gebirgskorps Formed in 1943 in the Balkans; operated in Albania and Yugoslavia and ended the war in the southern sector of the Eastern Front.

XXII Gebirgskorps Formed in 1943 in Greece; operated in the Balkans and in Hungary; ended the war in the southern sector of the Eastern Front.

XXXVI Gebirgskorps Formed in 1939 in Poland; subsequently operated in Norway and the far north of the Eastern Front; withdrew into Norway again at the end of the war. 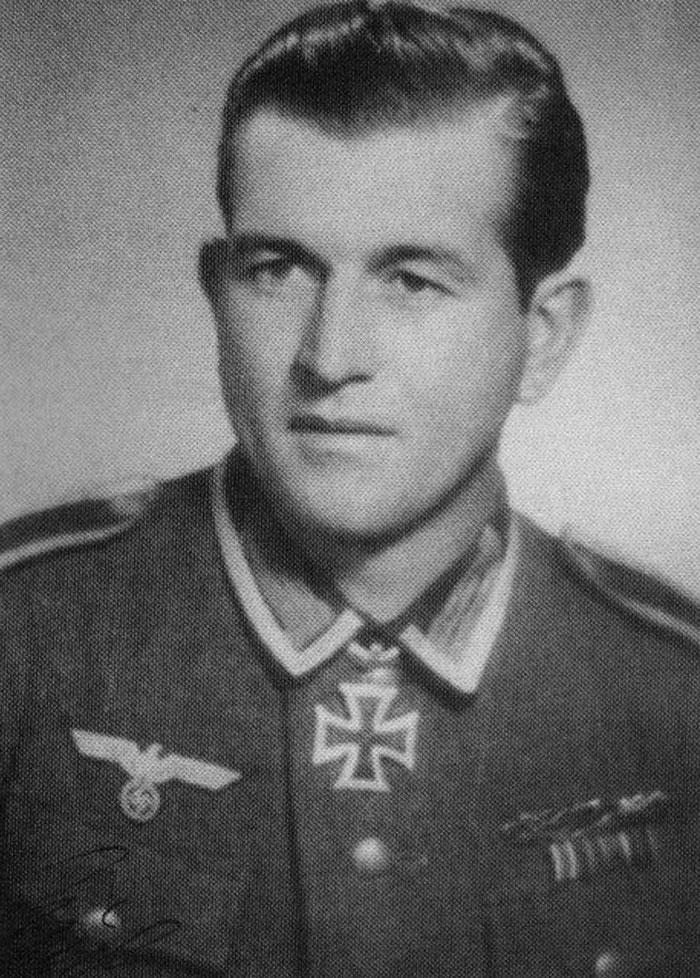 Unteroffizier Georg Audenrieth served in 3 Kompanie, Gebirgsjäger-Regiment 99, pari of 1.Gebirgs-Division, and was awarded the Knights Cross of the Iron Cross on 10 February 1945 for gallantry in the face of the enemy. (Audenrieth) 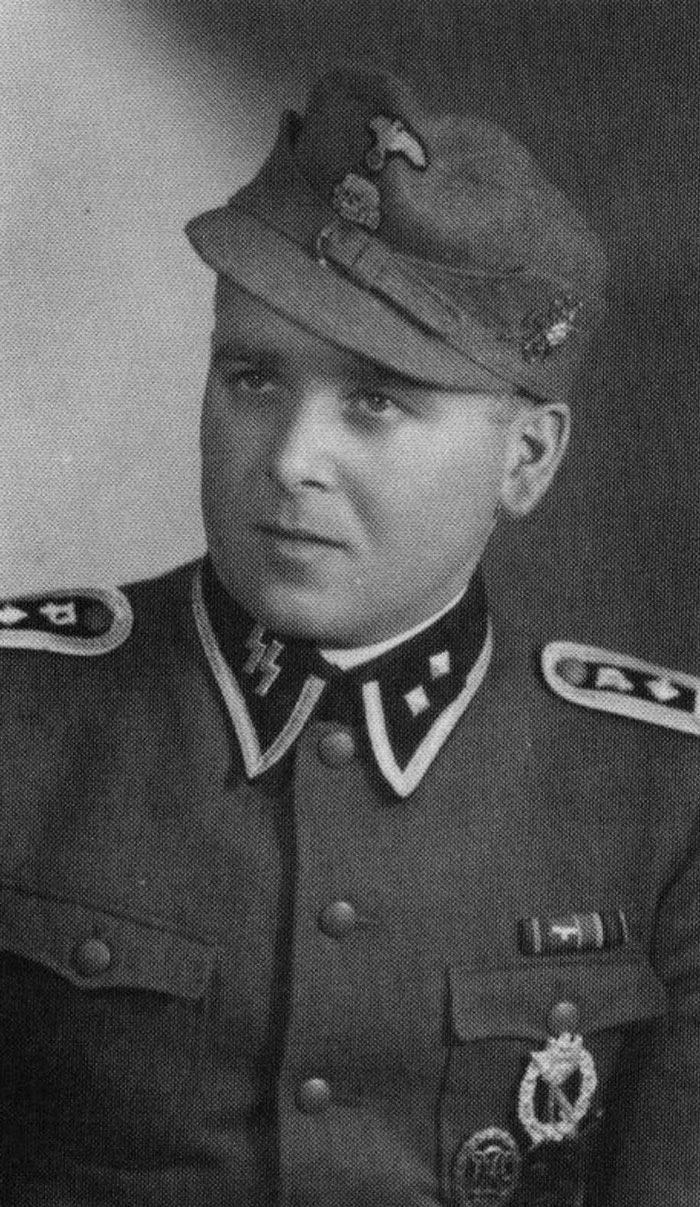 An unidentified Waffen-SS Oberscharführer from the antitank detachment of an SS Mountain Troop unit. Sole the use of the Army pattern metal Edelweiss insignia on the left side of his Bergmütze which is fastened with a distinctly non-regulation buckle Jilting. (Paul Turner)

XLIX Gebirgskorps Formed in 1940 in Czechoslovakia; served in the Balkans and the southern sector of the Eastern Front predominantly in the Crimea and the Caucasus, before withdrawing into Czechoslovakia, where it surrendered to the Russians at the end of the war.

LI Gebirgskorps Originally formed as an infantry corps in 1940, it was changed to a Gerbirgskorps and operated on the Eastern Front; lost at Stalingrad.

A number of corps commands were usually controlled by a higher authority at army level.

There was in fact only one mountain army, the 20.Gebirgsarmee, which was formed over the winter of 1941/42 to control the Gebirgskorps, which were operating on the far north of the Eastern Front. In late 1944 it withdrew into Norway, where it absorbed 21.Armee and controlled all German forces based in Norway, before surrendering to the British in 1945. 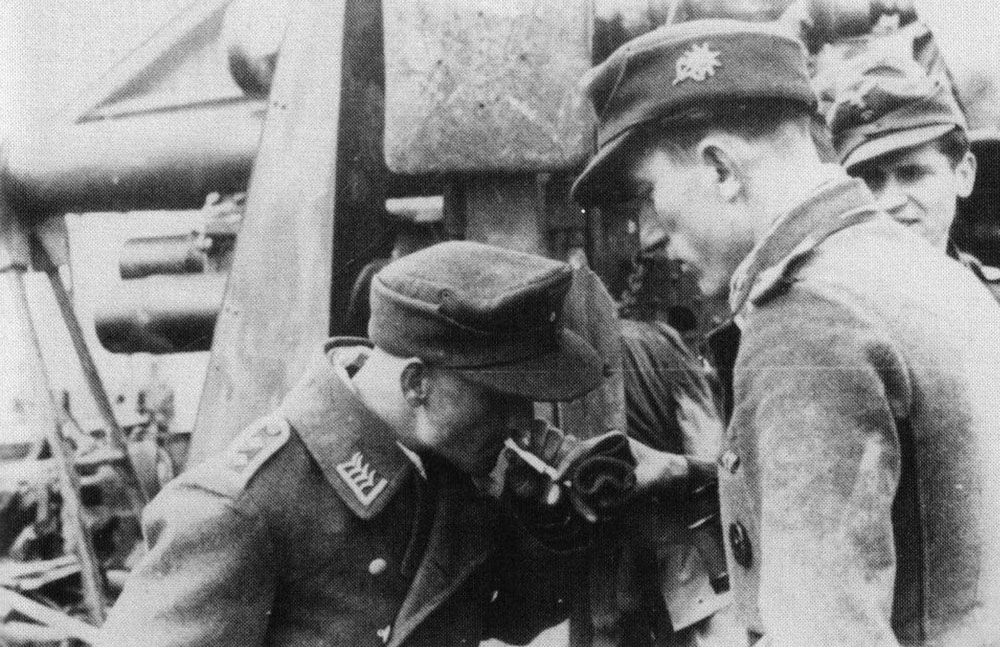 Although strictly against regulations, some Luftwaffe personnel based in mountain regions, such as this 88mm anti-aircraft gun crew, also wore the Edelweiss insignia on their caps. (Josef Charita)

The 1., 2. and 3.Gebirgs divisions were committed to the campaign against Poland. Their primary objective was the capture of Lemberg in Galicia, the provincial capital and a vital communications link for both rail and road traffic: 1.Gebirgs-Division would strike north from Czechoslovakia; 2.Gebirgs-Division would move eastwards through Czechoslovakia until it reached the Dukla Pass and then punch north through the pass into Poland; and the elements of 3.Gebirgs-Division that were committed to battle would cover the gap between the other two divisions.

The Gebirgsjäger would be obliged to cross some 200 miles of terrain in order to reach their objectives, and would do so by forced march, since no road or rail transport was available to them. In any case, a good deal of the route crossed mountains and hilly terrain, where travel by foot was the only option.

The Gebirgsjäger made rapid progress, and divisions 1. and 2. swiftly linked up after their pincer movement and rapid punch through Poland. Shortly afterwards 3.Division was removed from the front and despatched westwards. 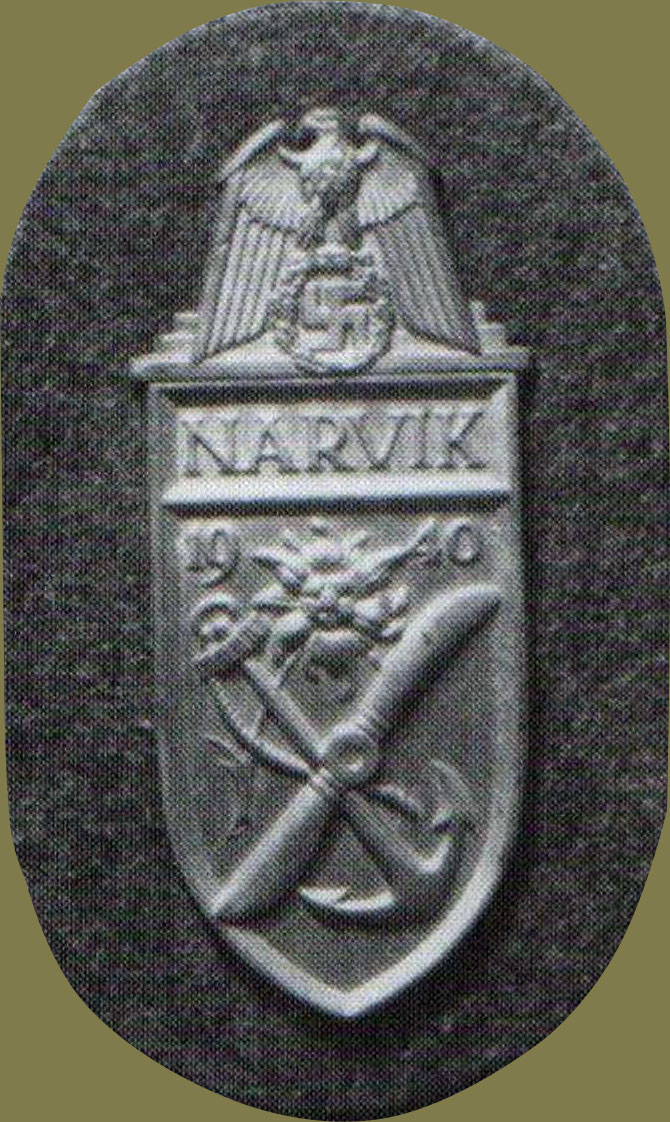 The Narvik Shield. This is an example of the silvered version on field grey hacking doth, as awarded to army personnel. Note the inclusion of an Edelweiss motif in the design, symbolising the participation of the mountain troops in this battle.

By 11 September the combined force of divisions 1. and 2. had covered well over 150 miles; three days later the Gebirgsjäger were in the hills around Lemberg. A Kampfgruppe from 1.Gebirgs-Division launched an attack on the city while the remaining Gebirgsjäger formed a defensive ring around it to prevent Polish reinforcements, now beginning to arrive in considerable numbers, from relieving Lemberg.

After a battle lasting six days, the Poles surrendered. The Gebirgsjäger were somewhat galled, however, to discover they would have to hand the city over to the Russians, who by then had invaded Poland from the east.

It had been the Gebirgsjäger's first campaign of the war, and they had performed exceptionally well, covering considerable distances in a short lime before successfully capturing their objective; they had endured fierce fighting against powerful enemy forces, and had gained the respect of the Polish garrison at Lemberg in the process.

By the early part of 1940, 2. and 3.Gebirgs-Divisions were on the Western Front, poised to strike against France. Then, in March, 3.Gebirgs-Division was withdrawn to Germany to prepare for participation in Hitler's next gambit, a lightning strike against Denmark and Norway. The Gebirgsjäger objective was the port of Narvik in the north of Norway. The mountain soldiers of Gebirgsjäger-Regiment 139 were transported to Narvik by sea, carried by destroyers of the Kriegsmarine. The landing was unopposed and the town was taken without a shot being fired. The divisional commander, Generalleutnant Dietl, accepted the surrender of the local garrison the same day. The success was to be short-lived, however: British warships arrived ihe following day and the first of a series of naval engagements ensued. The outcome was the sinking of the German destroyer flotilla, with heavy losses, and the British navy laying a blockade around the port. The Germans were now totally cut off from the nearest friendly forces, some 700 miles away. 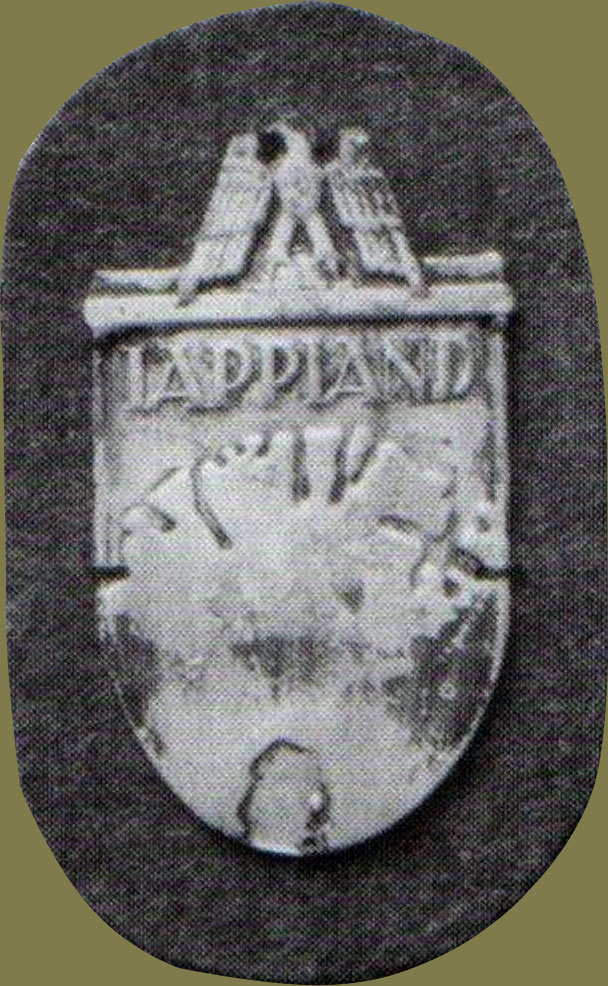 The Lapland Shield. Note the crudity of the cast aluminium construction. It is sewn rather than pinned to its backing cloth. 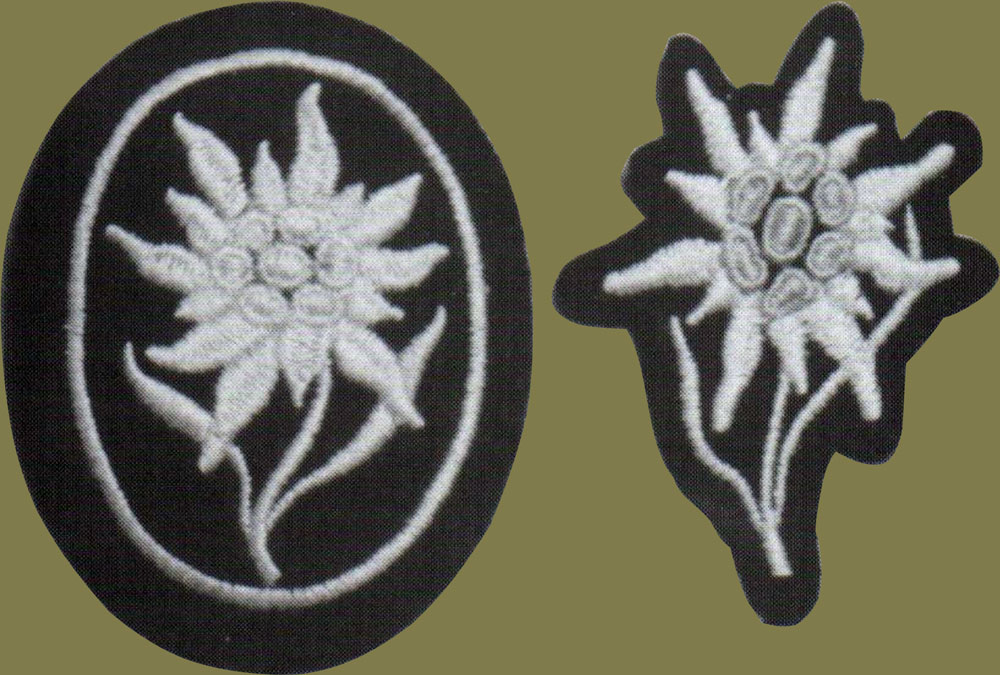 The regulation Waffen-SS versions of the Edelweiss insignia for the sleeve (left) and the Bergmütze/M43 cap (right). Until are machine-embroidered on a black badge-cloth backing, in silver-grey thread with yellow thread stamens.

The sunk and beached destroyers were quickly cannibalised for armaments, food and equipment, and the now-redundant survivors among the crews were turned temporarily into soldiers. Now, almost 2,000 sailors would be suddenly available to Dietl. 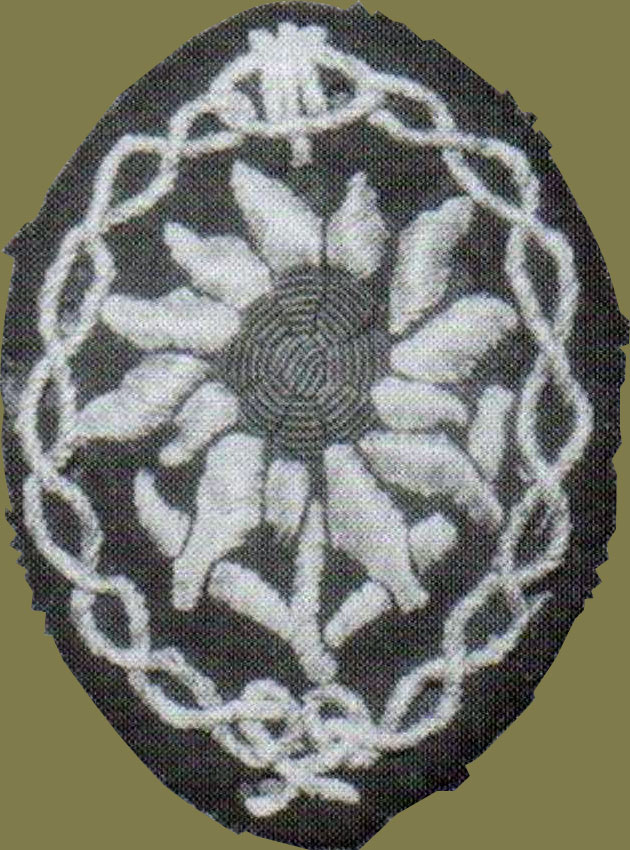 A 'flatwire' version of the 'Prinz Eugen' cuff title, woven in aluminium thread on a black rayon base.

The 'Kreta' cuff title, awarded to all who look part in the battle for Crete, in which the Gebirgsjäger, commanded by Julius Ringel, played a decisive part.

The Luftwaffe managed to land some transport planes on a nearby frozen lake, and was able to supply Dietl with a small number of 75mm artillery pieces. A defensive ring around most of the port was soon set up, and the men were positioned in small groups, in foxholes blasted out of the bare rock. There were barely enough to cover the perimeter of the port, and Dietl took a calculated risk in not defending the south-eastern approach to the town, correctly assuming that the terrain there was so difficult as to preclude a British attack from that direction. The British did not attack from the south-east, but a Norwegian force did, and they caused Dietl some considerable worry: they tried to blow the rail and the road links to cut the Germans off, but this attempt was quickly defeated by the Gebirgsjäger: On 14 April the Norwegian regular army units and elements of the British Expeditionary Force attacked from the north. The weak German force came under considerable pressure, compounded by the Royal Navy sending its destroyers into Narvik Fjord to shell the German positions. Hitler went so far as to give Dietl authority to withdraw his troops into neutral Sweden rather than face defeat, but Dietl refused to give up.

The battle continued, with the Allied side now reinforced by Polish and French troops. The Gebirgsjäger were able to fend off each assault (the Allied attacks were rarely well co-ordinated), but the attrition rate was constantly weakening the German force.

On 27 May, under cover of a naval bombardment, French troops were landed and after bitter, often hand-to-hand, fighting, the town fell to soldiers of the French foreign legion.

A small number of reinforcements, in the form of a few companies of Fallschirmjäger and Jäger troops, were dropped by parachute; welcome though these reinforcements were, it looked certain that the Germans must eventually be defeated, and they awaited the inevitable final assault by the Allies with trepidation.

The 'BeVo' version of the cuff title for SS-Gebirgsjäger-Regiment 11 'Reinhard Heydrich', woven in pule grey artificial silk thread on black.

At the beginning of May the remainder of the division was ordered to proceed to the Narvik area as soon as possible. They were moved from Denmark to Trondheim in Norway, by air, thence to Narvik by a small flotilla of merchant ships with a light naval escort. Unfortunately the flotilla came under attack from British submarines, which torpedoed two of the transport ships. The remainder of 3.Gebirgs-Division then had to set out on foot, racing against time to cover the 700 miles from Trondheim to Narvik and battling against the rearguard units of retreating Allied formations moving in the general direction of Narvik and against attacks from Norwegian ski-troops.

Despite all the difficulties facing them, leading elements covered almost half the distance to their objectives in just seven days. Time was running out for Dietl's beleaguered force in Narvik, however, and it was decided to make one last all out effort to reach the port by sending one company from each battalion, carrying only light fighting order and leaving all other non-essential kit behind, over the last 130 miles or so, at full speed. The terrain to be covered was a barren wilderness with no roads whatsoever, and the journey was across rivers and glaciers in dreadful weather conditions. When the relief force was but a few days march from Narvik, on 9 June, an order arrived cancelling the operation.

On 8 June Dietl had sent patrols towards the town of Narvik. They had returned to report that the Allies had evacuated their troops. Now, on 9 June, Norway had formally surrendered.

A small group continued its trek and on 13 June made contact with Dietl's force. Dietl and his elite Gebirgsjäger were feted as heroes, and Dietl himself became widely known in Germany as the 'Hero of Narvik'. He was decorated with the Knights Cross of the Iron Cross in recognition of his men's achievements.