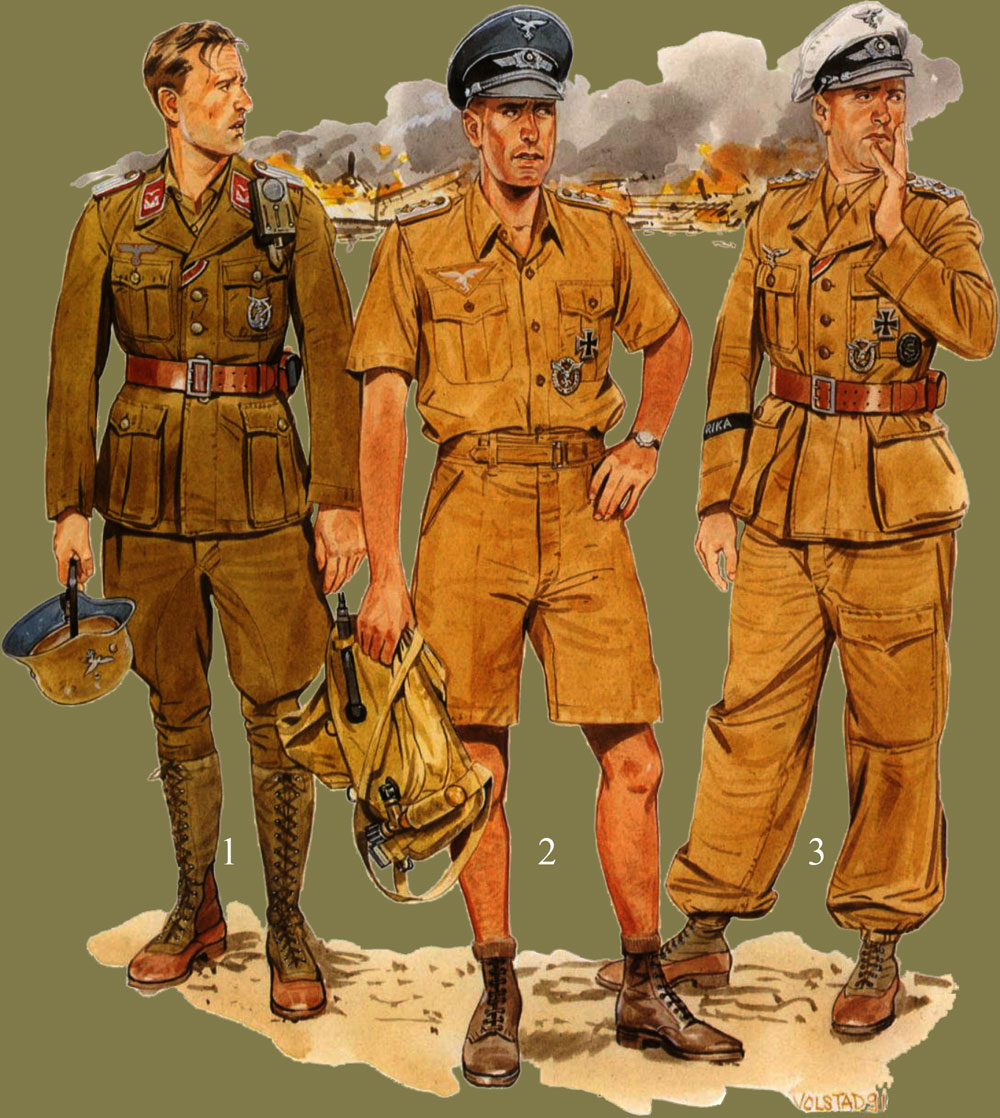 A Luftwaffe Flak officer wearing the Army pattern tropical Feldbluse as was often the case before Luftwaffe tropical kit became generally available. The tunic retains its original Army breast eagle but has the correct Luftwaffe shoulder straps for this rank and branch in bright silver braid on a red base. The collar patches from continental blue-grey service uniform, in silver embroidery on red, have also been added. The officer also wears Army issue tropical breeches and high laced boots. The tunic pocket bears the Luftwaffe Flak War Badge, and the ribbon of the Iron Cross Second Class is worn in the buttonhole. The standard Luftwaffe M35 blue-grey steel helmet, overpainted sand colour, still shows its Luftwaffe insignia.

This casually dressed Luftwaffe fighter pilot wears a short-sleeved shirt in Luftwaffe tan bearing the shoulder straps for a Hauptmann of Fliegertruppe - silver braid with two gilt pips on a golden yellow base. The Luftwaffe breast eagle, in silver-grey on a tan triangular base, is the type common to all ranks. On the shirt pocket is pinned his Iron Cross First Class and Pilot/Observer's Badge. Tropical shorts arc worn with ankle boots over which his socks are rolled. Use in Africa of the blue-grey Schirmmütze was quite common. 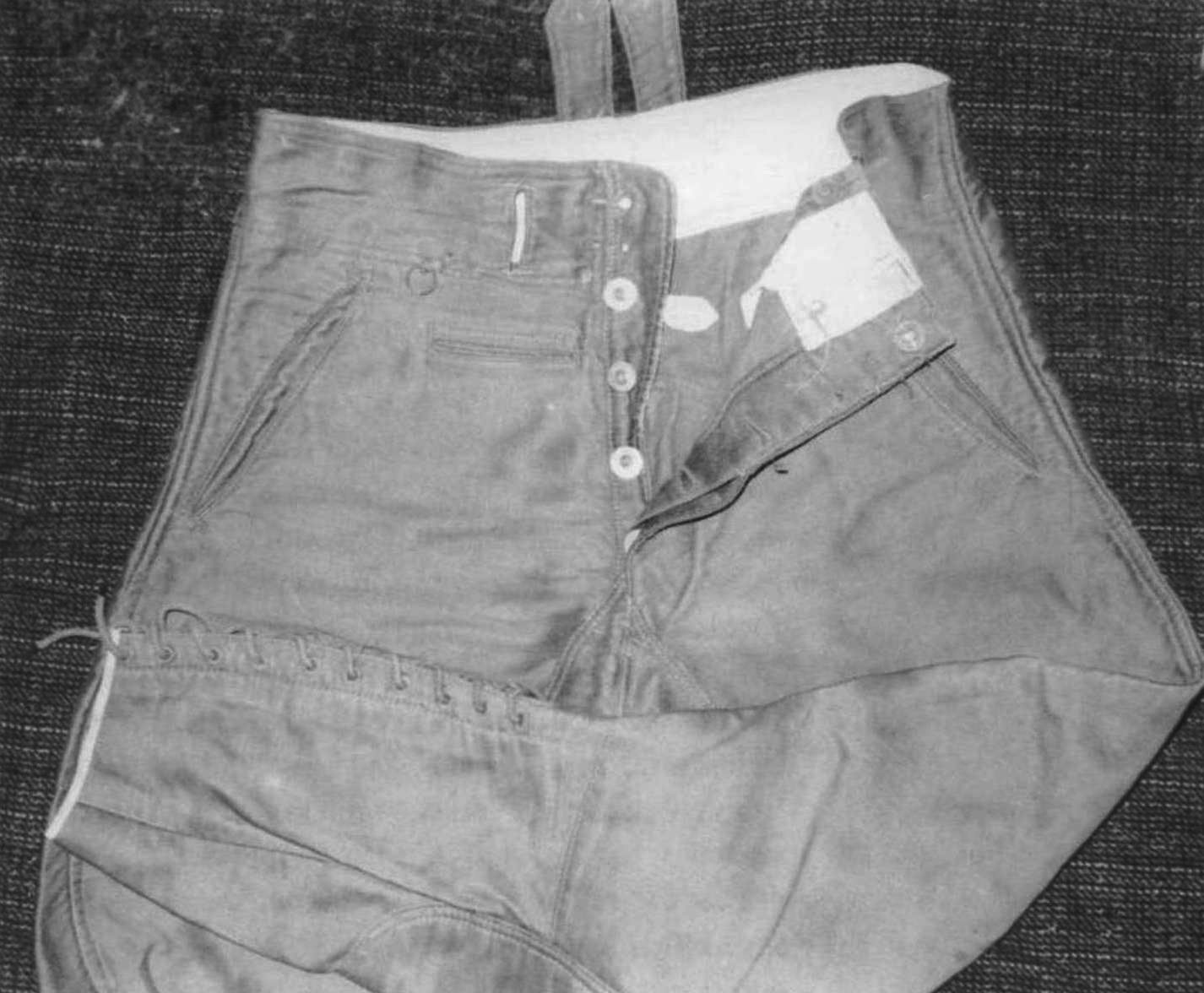 Detail of NCO collar Tresse, in a warm, golden copper-brown; 'all ranks' collar Litzen, in blue-grey artificial silk weave with reddish-tan central void and 'lights' down the bars; olive shoulder strap with Tresse all round edge, two silver-grey metal pips, and outer piping in the light green of the Gebirsjäger. (E. L. Collection) 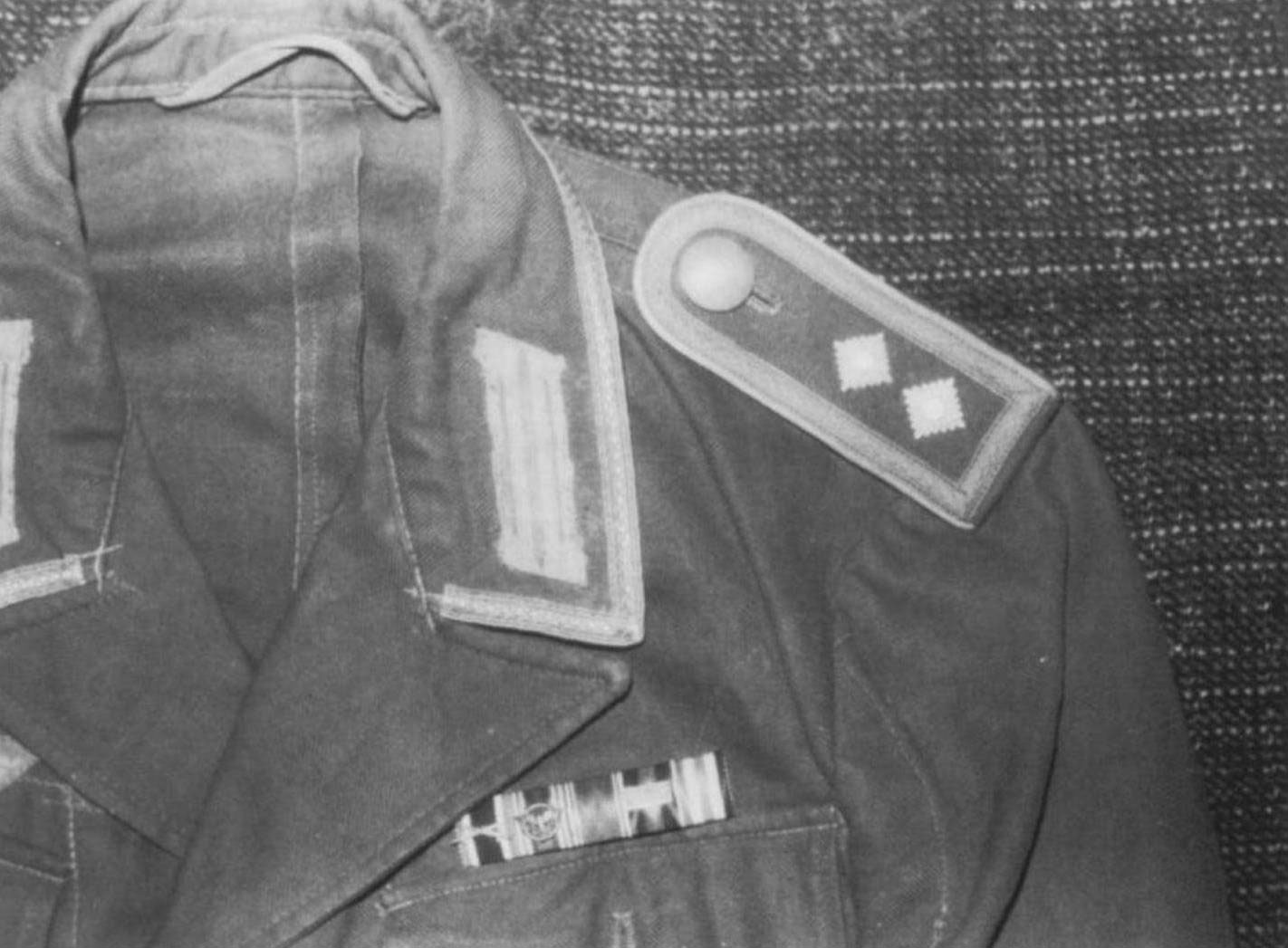 Details of the regulation issue olive tropical breeches, worn by all ranks with the high-leg laced tropical boots. Note lacing at the lower leg, zinc fly buttons, and white canvas reinforcement inside the waistband; the fob pocket is just visible left of the second button. (E. I. Collection)

This Oberstleutnant and Geschwader-Kommodore wears the Luftwaffe tropical Feldbluse. His rank is shown only by shoulder straps in bright silver twisted braid, with single gilt pip, on a golden yellow underlay. No collar patches are worn; and the breast eagle in this case is the aluminium pin-back type. On his right cuff is the Luftwaffe 'Afrika' cuffband in aluminium thread hand embroidery for officers. Loose trousers are worn with ankle boots. This officer has elected to wear the white-topped summer pattern of the peaked service cap in place of the blue-grey continental pattern. 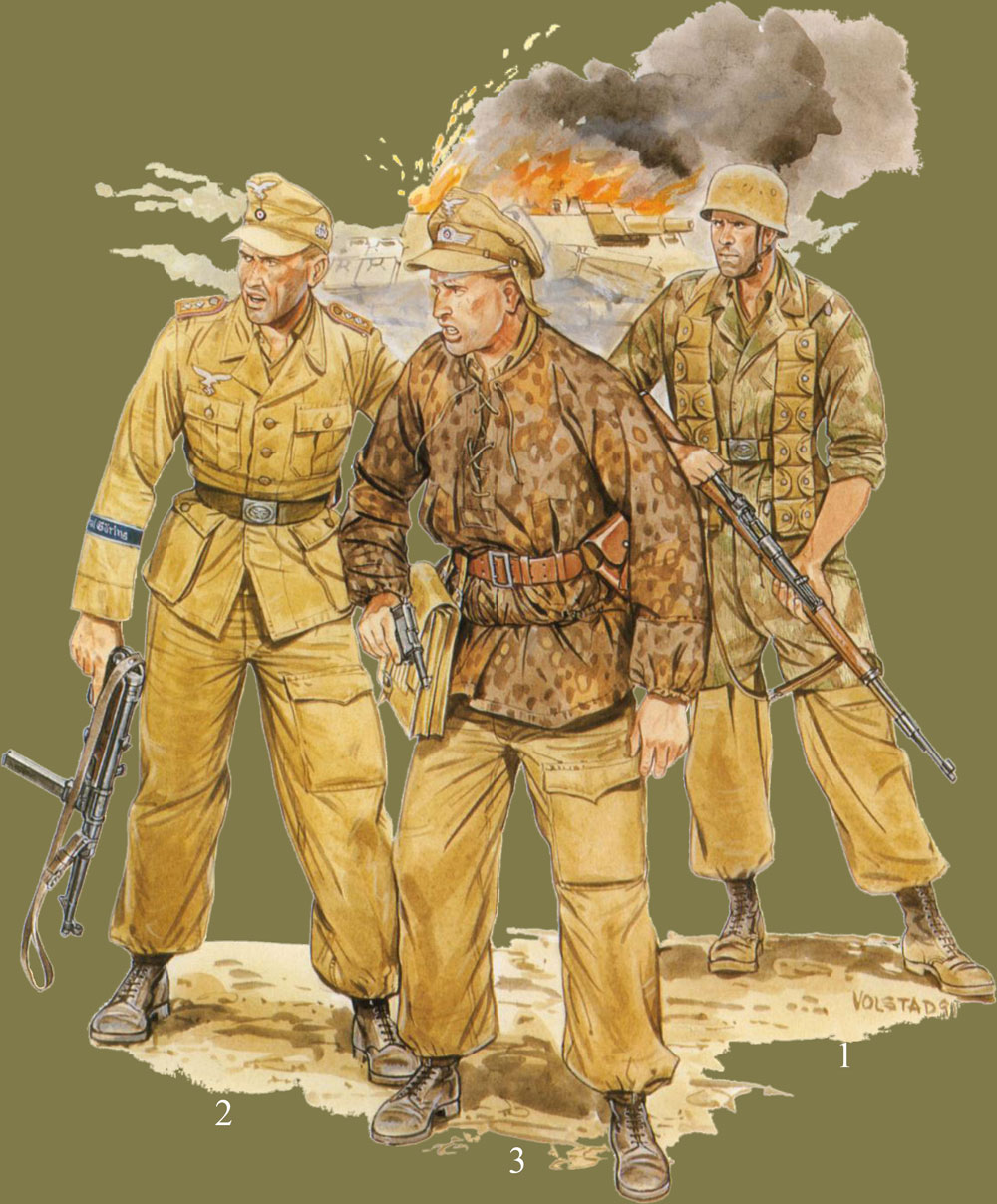 A Luftwaffe paratrooper from the Ramcke Brigade wearing the jump-smock in 'splinter' pattern camouflage material, over the standard Luftwaffe tropical trousers, and front-lacing jump-boots. The waist-belt is in webbing material with an olive-painted Luftwaffe buckle. Around the neck is worn a tan cloth rifle ammunition bandolier. In the desert heat the smock is worn with the neck open and the sleeves rolled. The paratroop issue steel helmet is over- painted in a tan colour. The weapon is the standard Kar 98k carbine.

A senior NCO from the 'Hermann Göring' Division shows an interesting combination of clothing and insignia. He wears the Luftwaffe tropical Feldbluse without collar patches, his rank Oberfeldwebel being shown by the tan shoulder straps with copper-brown braid edging and a single pip; the pink piping indicates that he is from an armoured unit of the Division. On the lower right cuff is the NCO's pattern of the pre-1942 'General Göring' cufftitle, widely retained after the introduction of later patterns. Luftwaffe trousers arc worn tucked into ankle boots. The cap is an exact copy of the Army pattern but in tan rather than olive cloth and with Luftwaffe insignia. On the left side of this particular cap is worn an alloy SS pattern cap deathshead badge, a fashion known within the division's Panzer-Regiment.

Conversing with the Oberfeldwebel is a young officer from the Jäger Regiment. The combination of clothing shown seems unusual but is known from photographic evidence. The cap worn is the unique Luftwaffe 'Hermann Meyer' with buttoned neck flap. Over the standard tropical shirt is worn a Waffen-SS camouflage smock of first pattern 'plane tree' type, commonly used by the division. The usual baggy trousers and ankle boots are worn. A leather belt with double-claw buckle supports a Walther P38 pistol in a leather holster. 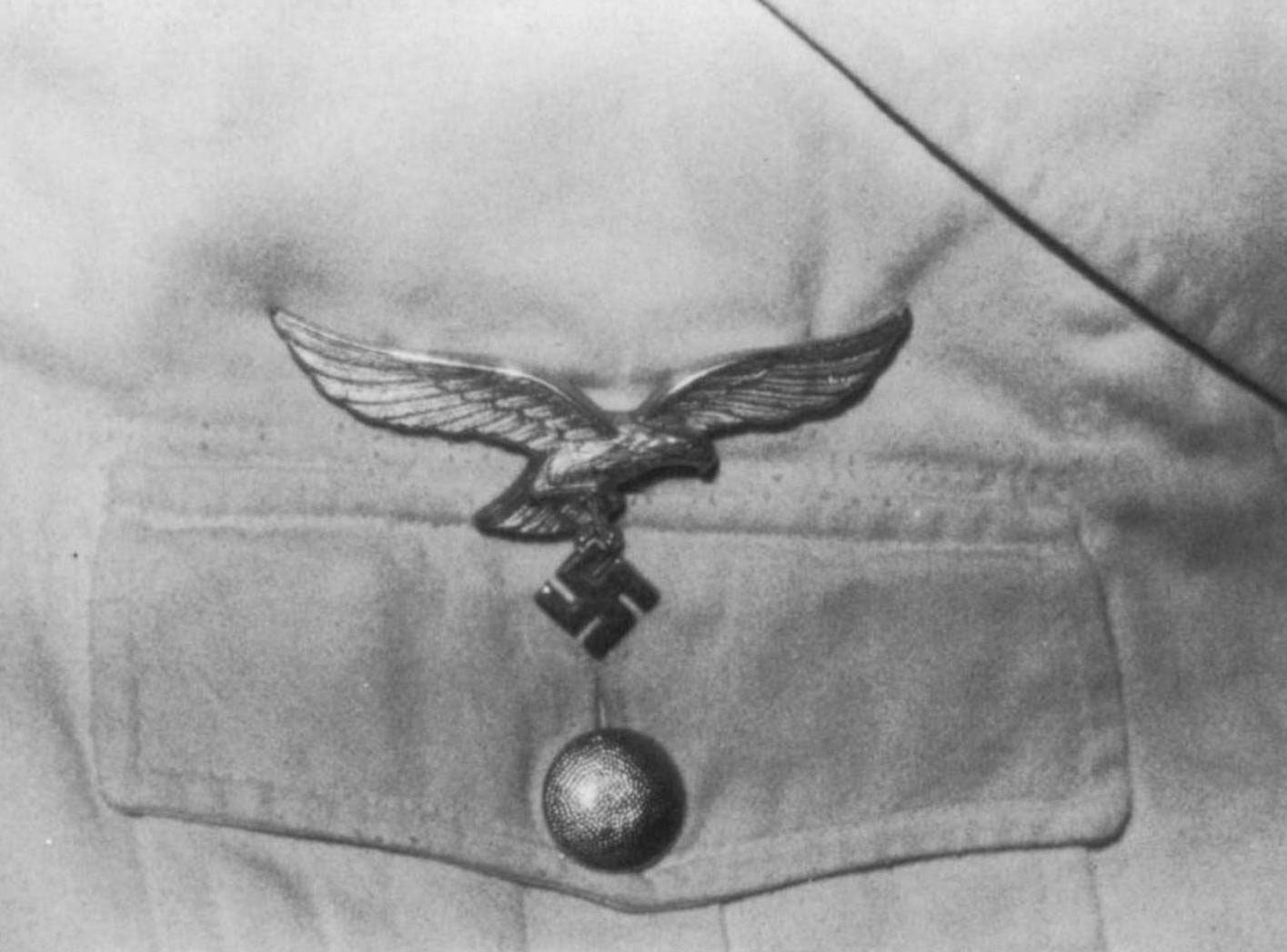 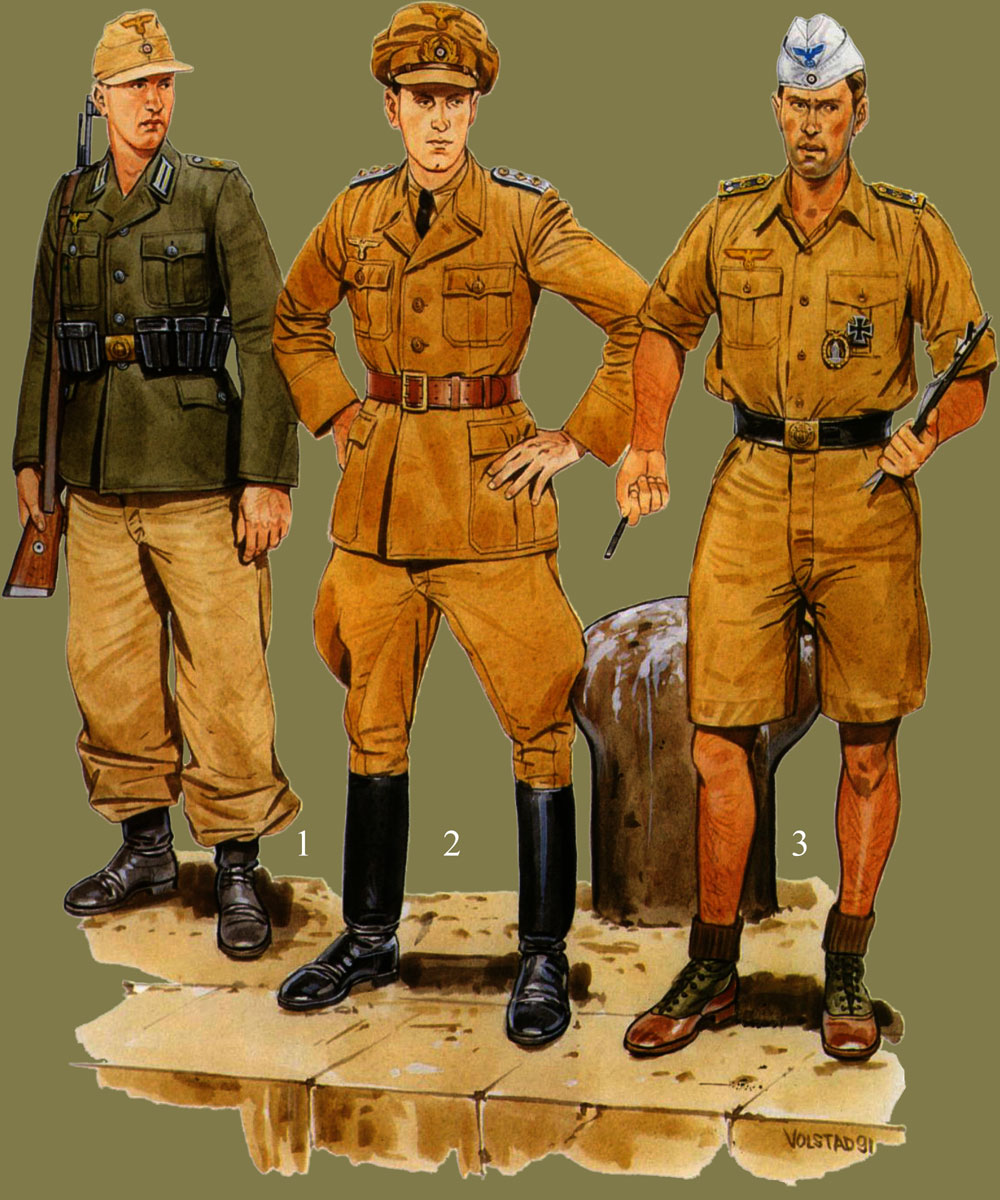 A Navy seaman guarding one of Rommel's supply ports. He wears a combination of field grey and tan tropical clothing. Naval issue tropical trousers were of almost identical appearance to those of the Luftwaffe, being cut very loose, but lacked the thigh pocket. Black leather marching boots arc worn. The tunic is from the field grey uniform and is similar to that of the Army, differing mainly in having slash rather than patch lower pockets. The collar has been pressed open. Shoulder straps cut in field grey cloth are wide and with pointed ends; they bear the emblem of the sailor's trade - crossed anchors - in yellow cotton embroidery. The breast eagle is in woven yellow silk on a green backing, and the field grey buttons bear the traditional anchor motif. Black leather ammunition pouches for the sailor's Kar 98k arc worn on a black leather waist-belt with gilt buckle. The tropical field cap is identical in appearance to that of the Army but in tan cloth with the national emblem in a yellow silk on tan base.

A naval officer in full tropical dress. He wears the standard naval tropical Feldbluse, a four-pocket open-neck tunic very similar to that of the Luftwaffe; colours varied from golden tan to a medium brown. Shoulder straps, in silver braid with two gilt pips on a dark blue underlay, indicate the rank. He has attached a gilt metal pin-on breast eagle to his tunic in place of the standard woven pattern. Tan breeches arc worn with black leather jackboots.

The naval tropical peaked cap was rarely encountered. It closely followed the design of the dark blue Schirmmütze but was cut entirely in a tan twill material, with a brown leather chinstrap and golden- yellow-on-tan insignia. The belt is brown leather with a gilt double-claw buckle.

A warrant officer serving on a patrol vessel operating from a North African port. He wears the tan naval issue tropical shirt, with shoulder straps and all-ranks breast eagle; typically, the rank shoulder straps from the navy blue uniform have been applied. The breast eagle is in yellow thread on a tan backing. On the breast pocket are pinned the Iron Cross First Class and the Minesweeper's War Badge. Tropical issue shorts are worn with the standard black leather waist-belt with gilt buckle. In this example the white summer issue sidecap is worn, bearing its blue-on- white insignia.