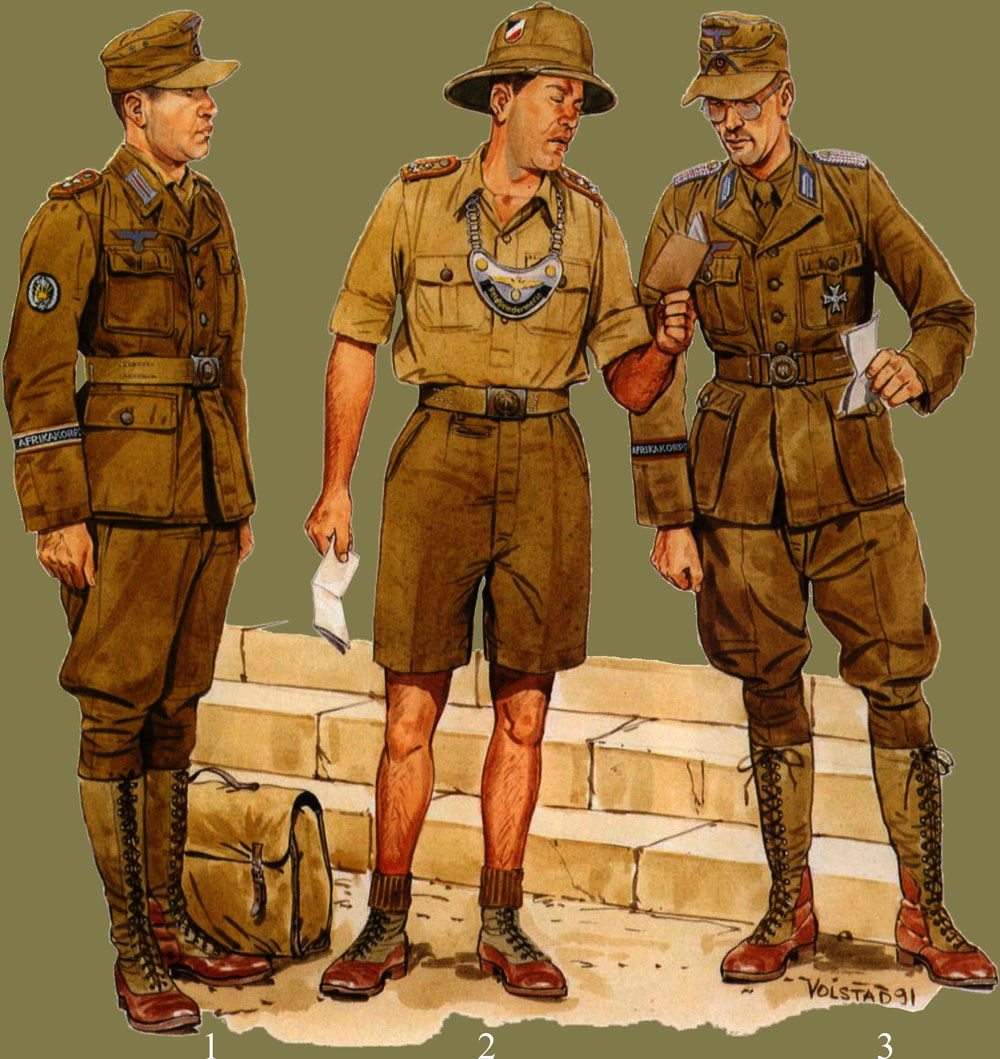 He wears full Army tropical issue dress including a late pattern peaked field cap without Waffenfarbe soutache. His tunic also lacks the usual NCO collar Tresse, common in later stages of the campaign when supplies were erratic. The tunic had been simplified by the removal of the pocket pleats and the scallop to the flaps. His shoulder straps retain the NCO braid, and bear the single rank pip of his rank; green outer piping indicates the grenadier branch. On the upper right sleeve is the silk woven emblem of Sonderverband 288. The waist-belt is in olive webbing with an olive-painted buckle. Olive breeches are worn with high lace-up boots.

A smart warrant-officer of the Feldgendarmerie in shirtsleeve order and shorts. The shirt has been neatly pressed and has the sleeves rolled. His shoulder straps in olive cloth with copper-brown Tresse feature orange-red branch piping and the three pips of his rank. Shorts are worn with a webbing waist-belt bearing an olive-painted buckle. Ankle boots arc worn with the socks neatly rolled over the top. The Stabsfeldwebel wears the early pattern Army pith helmet in cork covered with olive canvas. Around the neck is worn the Feldgendarmerie duty gorget.

Perhaps anticipating language problems, the Feldgendarmerie warrant-officer is accompanied by a Sonderführer interpreter. Of officer status, he wears the aluminium-piped version of the peaked field cap with a soutache in the grey-blue Waffenfarbe of the Sonderführer officials. In place of the normal tropical collar tabs he wears the special patches of this officer's branch of service; these have a blue-grey base with a silver braid bar, with one end cut straight and the other pointed. The shoulder straps have blue-grey underlay with silver braid incorporating a red/black fleck. On the lower left sleeve is the 'Afrikakorps' formation cufftitle. A tropical webbing belt is worn with the circular officer's buckle in olive painted zinc or aluminium. Breeches and long lace-up boots are worn. On the right breast pocket is worn the War Merit Cross First Class. 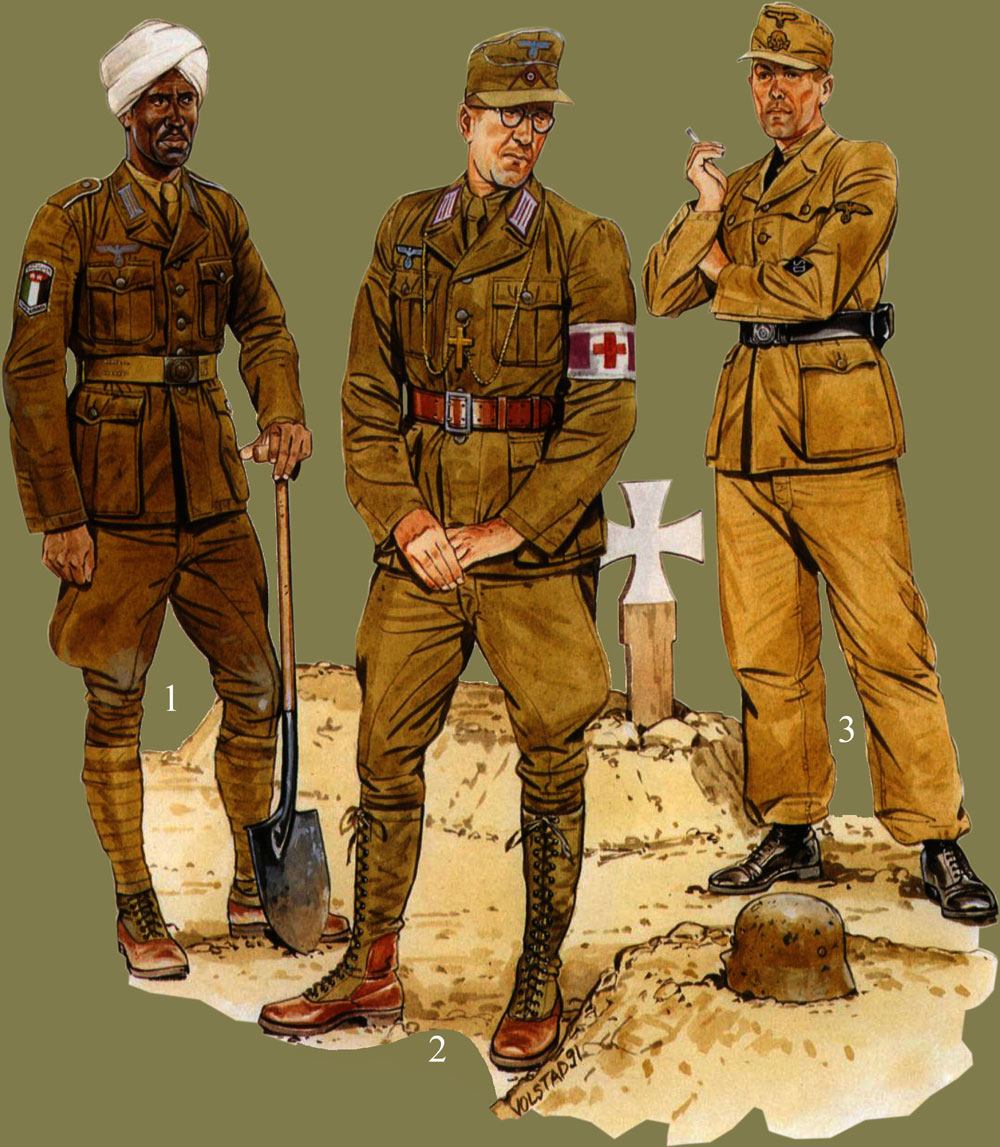 A volunteer from the 'Free Arabian Corps', this soldier wears the turban with his tropical Feldbluse. On the upper right sleeve is sew n the 'Freies Arabien' shield. Tropical breeches arc worn but with puttees and ankle boots. Initially, before the issue of German tropical dress, French uniforms were worn together with a white armband bearing the legend 'Im Dienst der deutschen Wehrmacht' in black lettering. 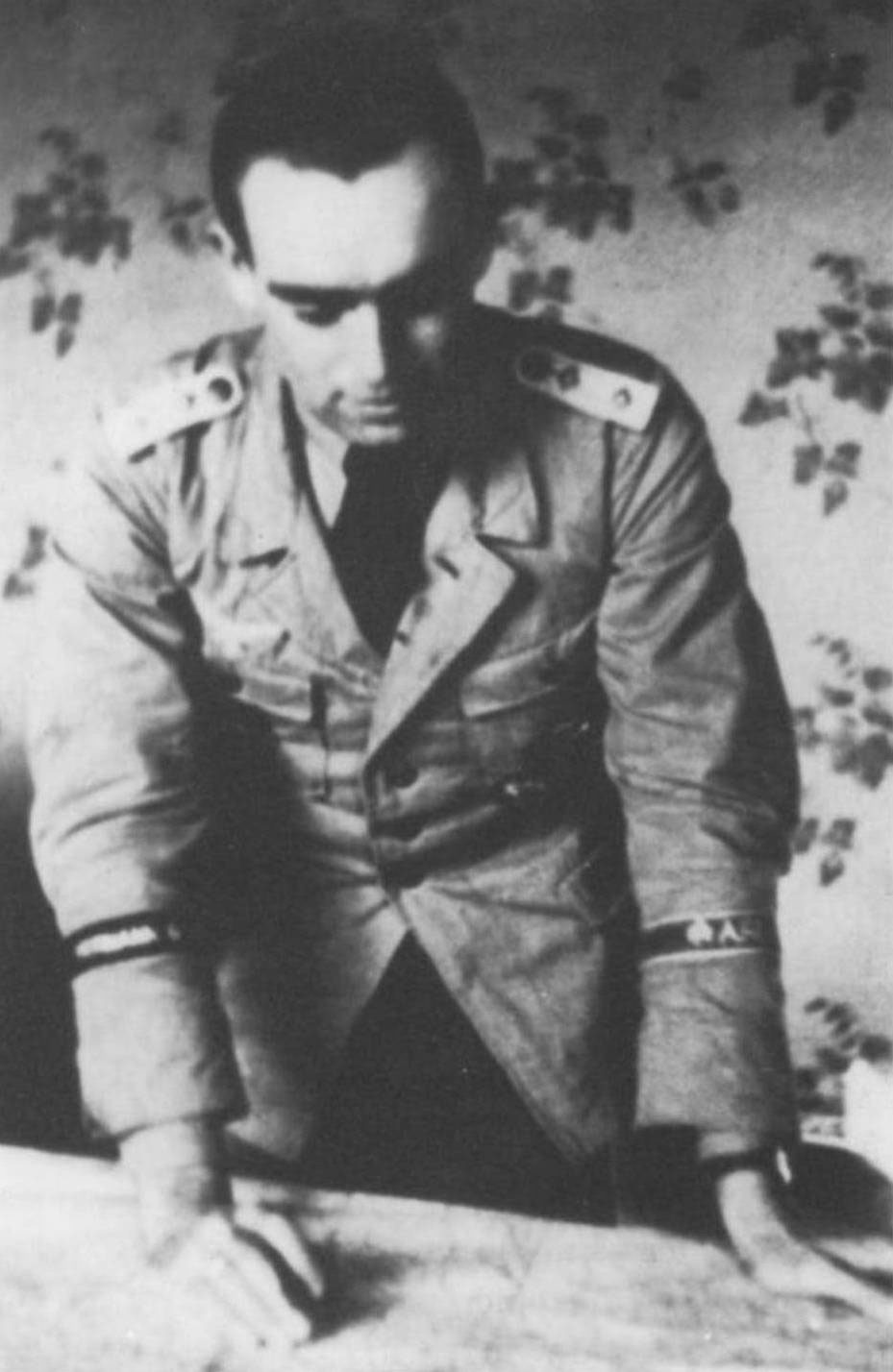 A military chaplain in formal tropical dress as for burial services, etc. The officer's version of the peaked field cap bears a Waffenfarbe soutache in the violet colour of the Army chaplaincy. Officer's collar tabs from the field grey dress are worn, in aluminium hand embroidery with violet Waffenfarbe. No shoulder straps are worn on the chaplain's uniform. The breast eagle, also from the field grey uniform, is in aluminium hand embroidery on a dark green backing. On a long chain around the neck is worn a plain cross indicating a Protestant chaplain; a Catholic priest would have used a crucifix bearing the figure of Christ. On the left sleeve is worn a chaplain's white armband bearing a violet stripe and a red cross.

This, admittedly speculative, illustration shows how the staff of SS/SD Einsatzkommando Tunis would presumably have appeared in tropical SS service dress. The tropical peaked cap is very plain with no false flaps, and bears the individual SS eagle and skull badges in tan silk weave on black. The tunic is the Italian 'Sahariana' style, favoured by some German officers. The sleeve eagle is also woven in tan on black and on the lower left sleeve is the diamond-shaped arm patch bearing the silver letters SD. No collar patches arc worn. The waistbelt is the standard black leather pattern with SS issue buckle. Long tan trousers arc worn tucked into short ankle boots. 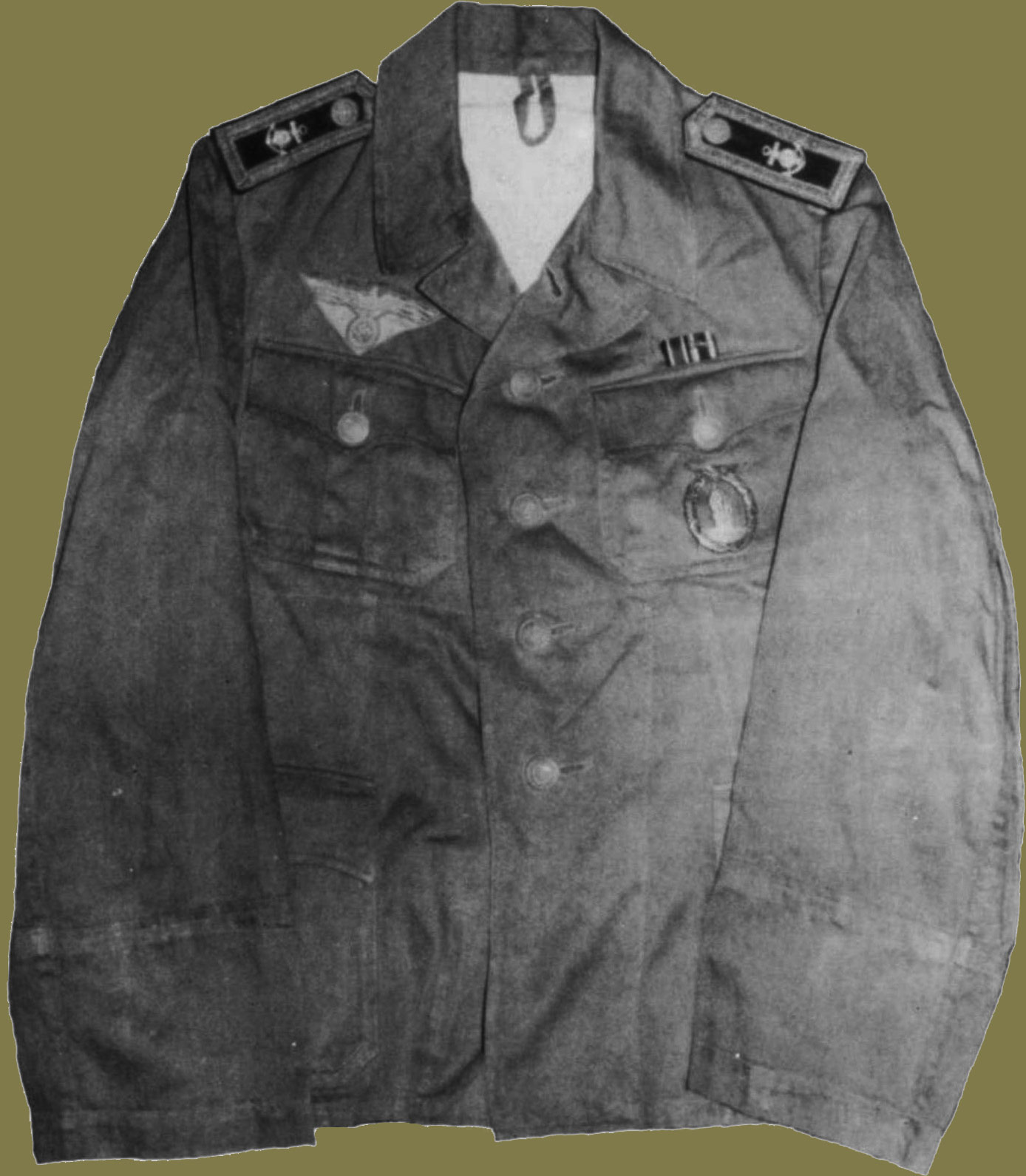 Kriegsmarine tropical tunic, in tan cotton with partial white cotton lining. The warrant officer's shoulder straps arc the blue and gold pattern from the continental uniform; use of actual tropical shoulder straps, in tan with blue Tresse, was not common. (E. L. Collection) 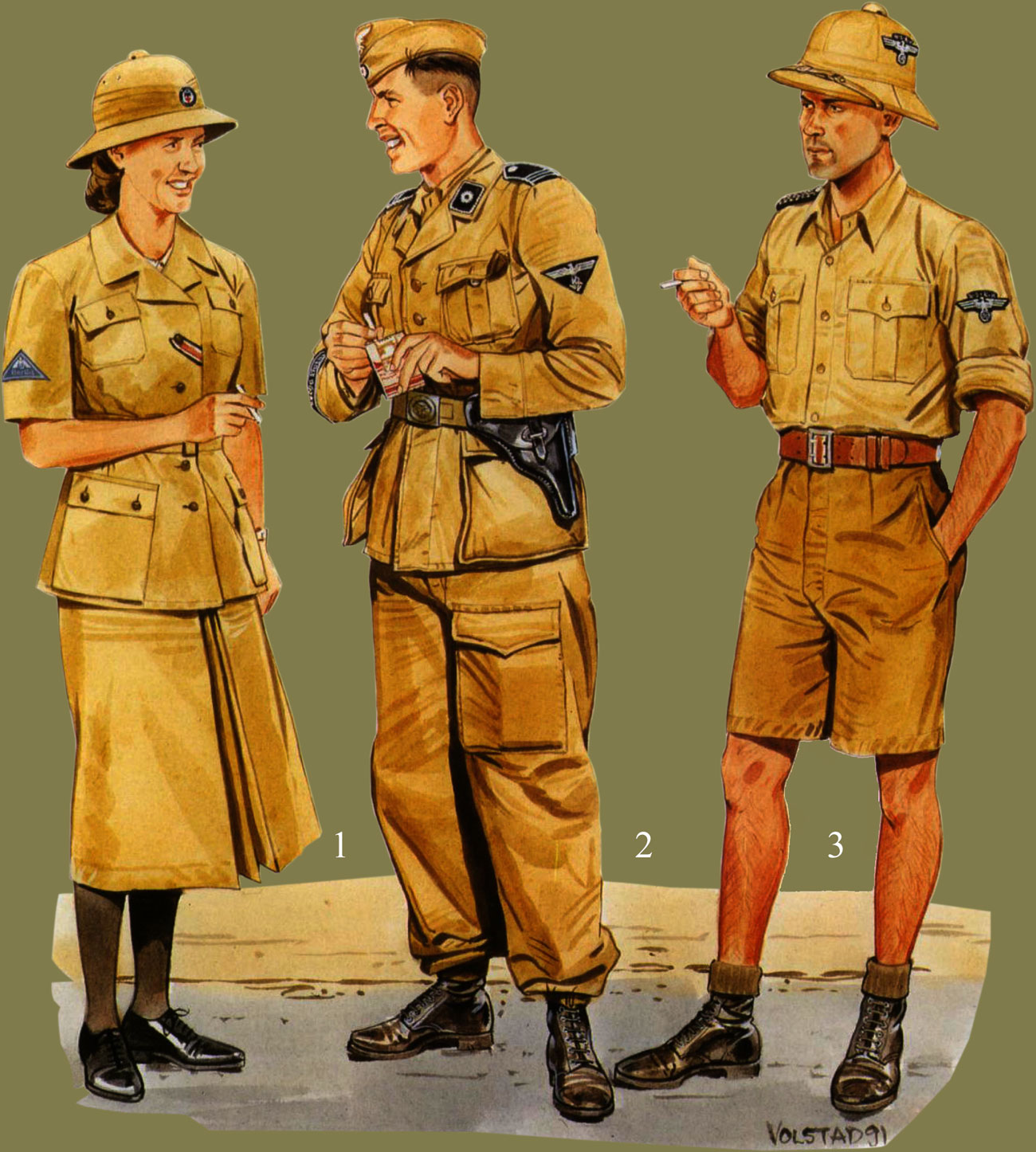 Nurses of the German Red Cross served with gallantry and distinction on many fronts and North Africa was no exception. This nurse wears full tropical kit. On the front of a puggaree added to the tan coloured sun helmet has been pinned the enamelled Red Cross brooch normally worn at the throat. The tan cotton tunic existed in both long and short- sleeved versions. Note the top pocket flaps arc fastened by one button whereas the lower have two. A tan cloth belt is worn; and the right sleeve features the white-on-grey silk woven DRK emblem with 'Berlin 1' area identification. A pleated tan skirt is worn with black stockings and shoes. The ribbon of the Iron Cross in the second buttonhole of the tunic shows that she has been decorated for bravery in tending wounded soldiers under fire.

One of the smaller units to serve in North Africa was the 4th Motor Transport Regiment of the NSKK or National Socialist Motor Transport Corps, a branch of the Nazi Party. Engaged in auxiliary transport duties, they wore Luftwaffe tropical clothing. The driver shown here wears the Luftwaffe sun helmet but with a silver-on-black woven NSKK eagle on the left side. In shirtsleeve order, he wears the single right hand shoulder strap of an NSKK private, in silver and black twist cord on a black base. On the left sleeve is the NSKK sleeve eagle, identical to that worn on the sun helmet. A brown leather belt with double-claw buckle is worn with the tropical shorts and ankle boots. 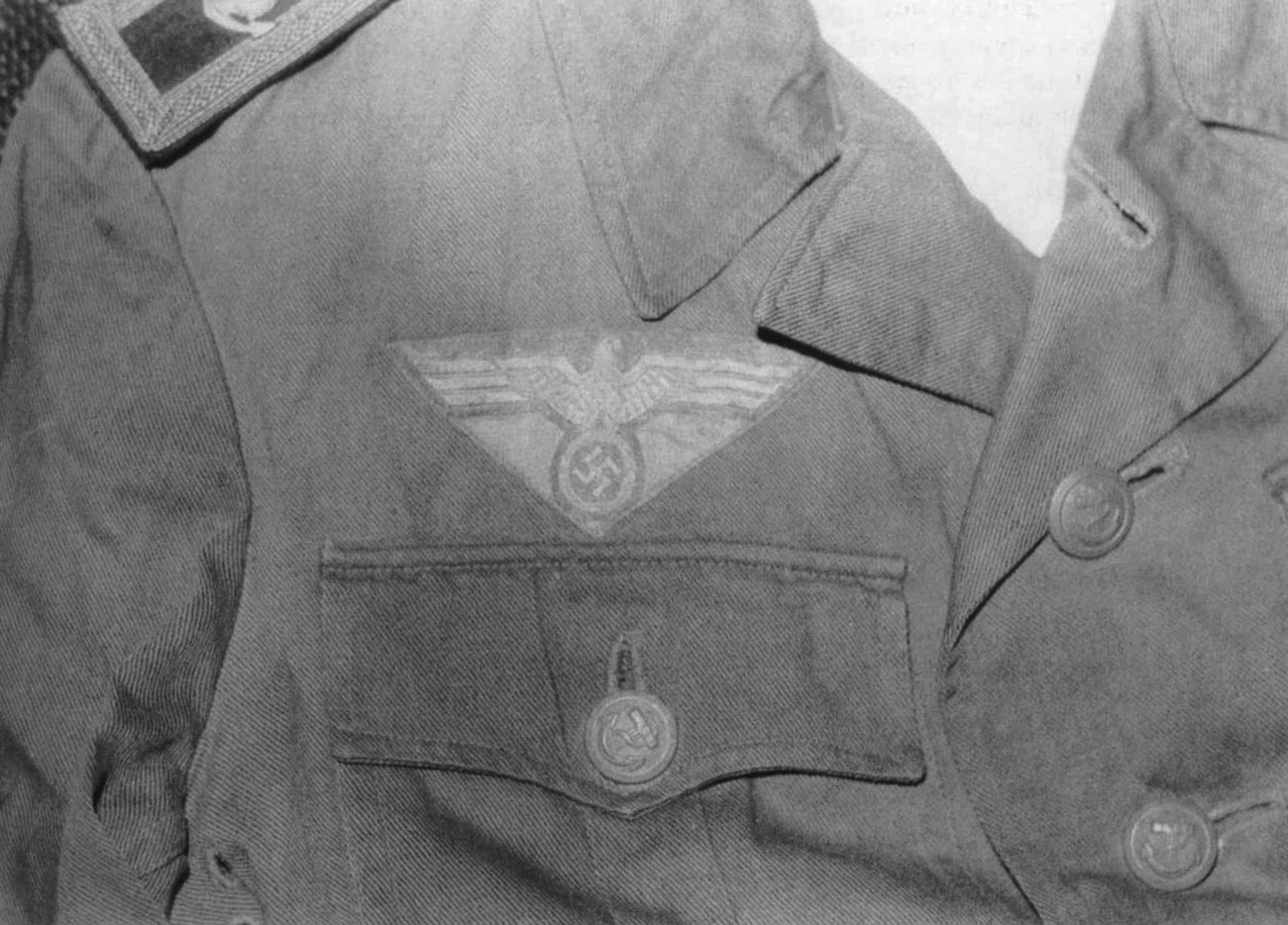 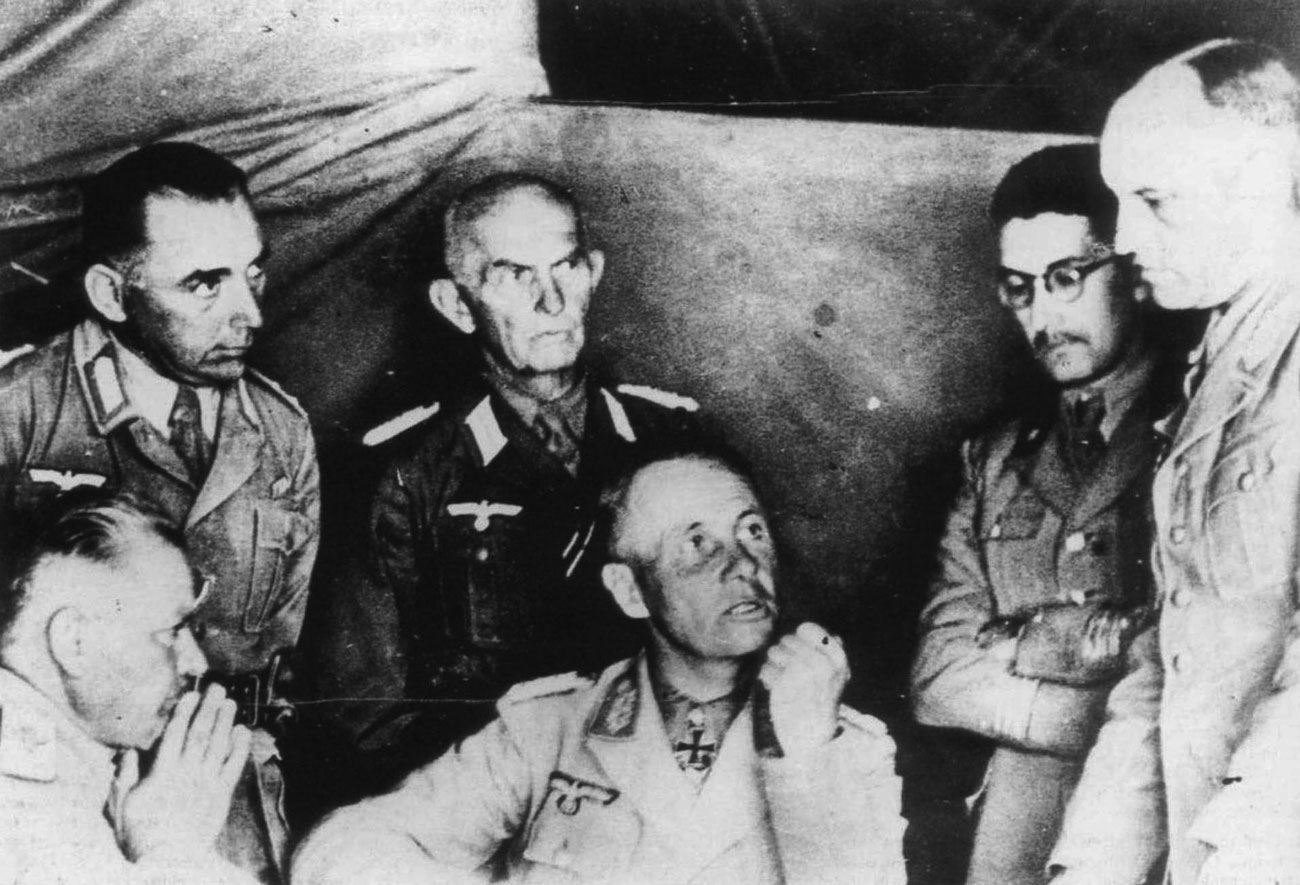 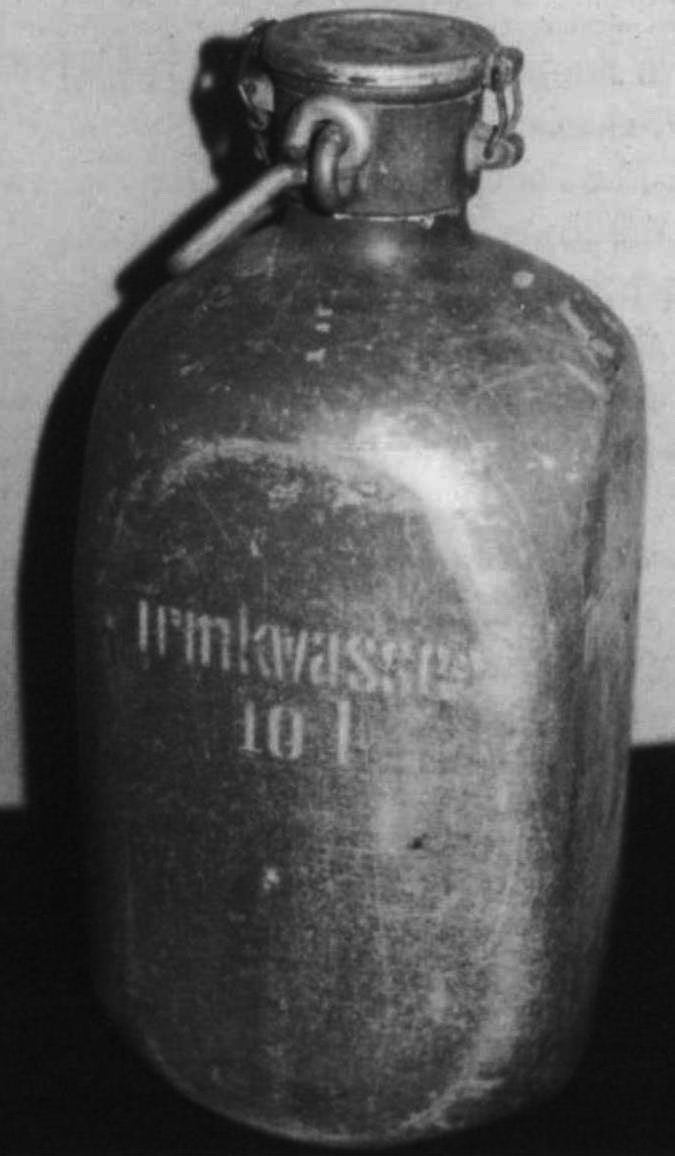 Although the ubiquitous 'jerrycan' was used for carrying water as well as petrol, marked with a hold white-painted cross, drinking water containers were also supplied to the DAK. This 10 litre example is of sand-painted aluminium, with the legend 'Trinkwasser 101' stencilled in white. (E. L. Collection)

A number of personnel from the Technical Emergency Service or TeNo served in North Africa alongside the Luftwaffe on airfield construction and repair; Luftwaffe tropical clothing was worn. This junior NCO wears the sidecap with Luftwaffe insignia, and the Luftwaffe field blouse with added TeNo shoulder straps, collar patches and sleeve eagle; the machine woven grey-on-black 'Technisches Nothilfe' cuffband is worn on the lower left sleeve. A Luftwaffe belt supports a holstered Walther P38. Long trousers arc worn tucked into ankle boots.