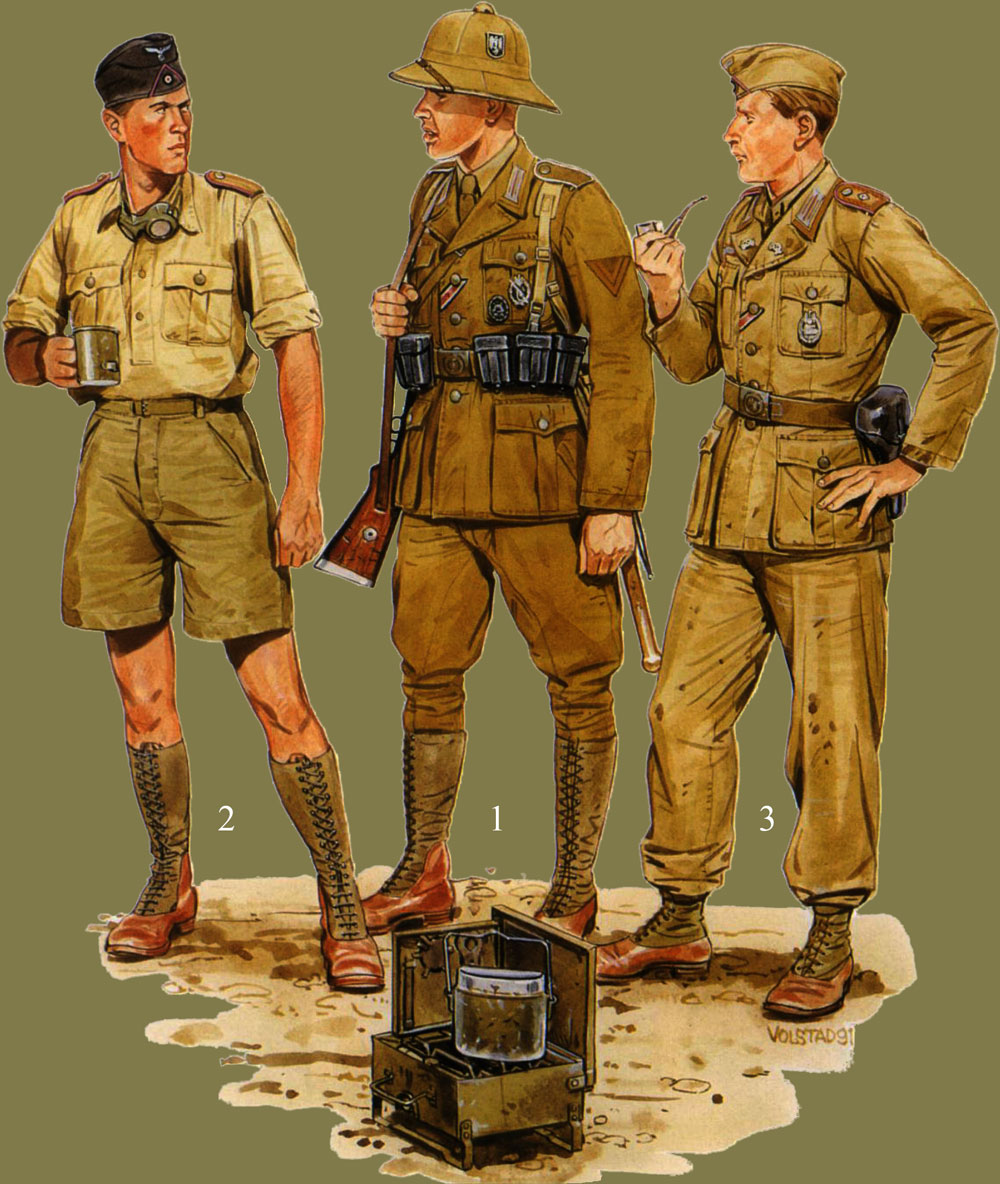 Newly arrived in North Africa, this junior NCO is wearing freshly issued tropical kit including the unpopular pith helmet, olive green tropical Feldbluse and breeches, and high leg lace-up boots. The waist- belt and bayonet frog are in webbing, though the ammunition pouches are the standard black leather pattern. The use of shirt and tie gives a formal appearance, in marked contrast to the typical desert veteran. Having seen service in earlier campaigns, the soldier wears the ribbon of the Iron Cross Second Class in his buttonhole, while on his left pocket arc pinned the Infantry Assault Badge and black Wound Badge. His weapon is the standard Kar 98k carbine. On his left sleeve only is the double chevron of an Obergefreiter.

Divested of as much cumbersome clothing as possible, this Panzer crewman wears tropical shorts with high leg lace-up boots. In shirtsleeve order, the only insignia he shows are the shoulder straps showing his rank of Unteroffizier by the exact arrangement of the copper-coloured NCO Tresse, and his branch by the pink piping. In common with many of his comrades he has retained the M38 Feldmütze from his black Panzer service dress, bearing a pink Panzer Waffen-farbe soutache over the national cockade. Around his neck are worn one of the many variants of sun and sand goggles issued in North Africa.

In contrast, this Feldwebel tank commander wears full tropical service dress. The Feldbluse has copper-brown NCO Tresse around the collar and the edge of the shoulder straps, which arc also piped in pink and carry a single aluminium rank pip. The aluminium skulls from the collar patches of the black Panzer jacket arc worn on the lower lapels of the tropical Feldbluse. This NCO wears the ribbon of the Iron Cross Second Class in his buttonhole and the Panzer Battle Badge on his breast pocket. The waistbelt is the webbing type with olive painted buckle, from which is slung a Walther P38 pistol in a black leather holster. The tropical version of the M38 Feldmütze is worn, with its pink Waffenfarbe chevron. Long trousers and tropical ankle boots complete the uniform. 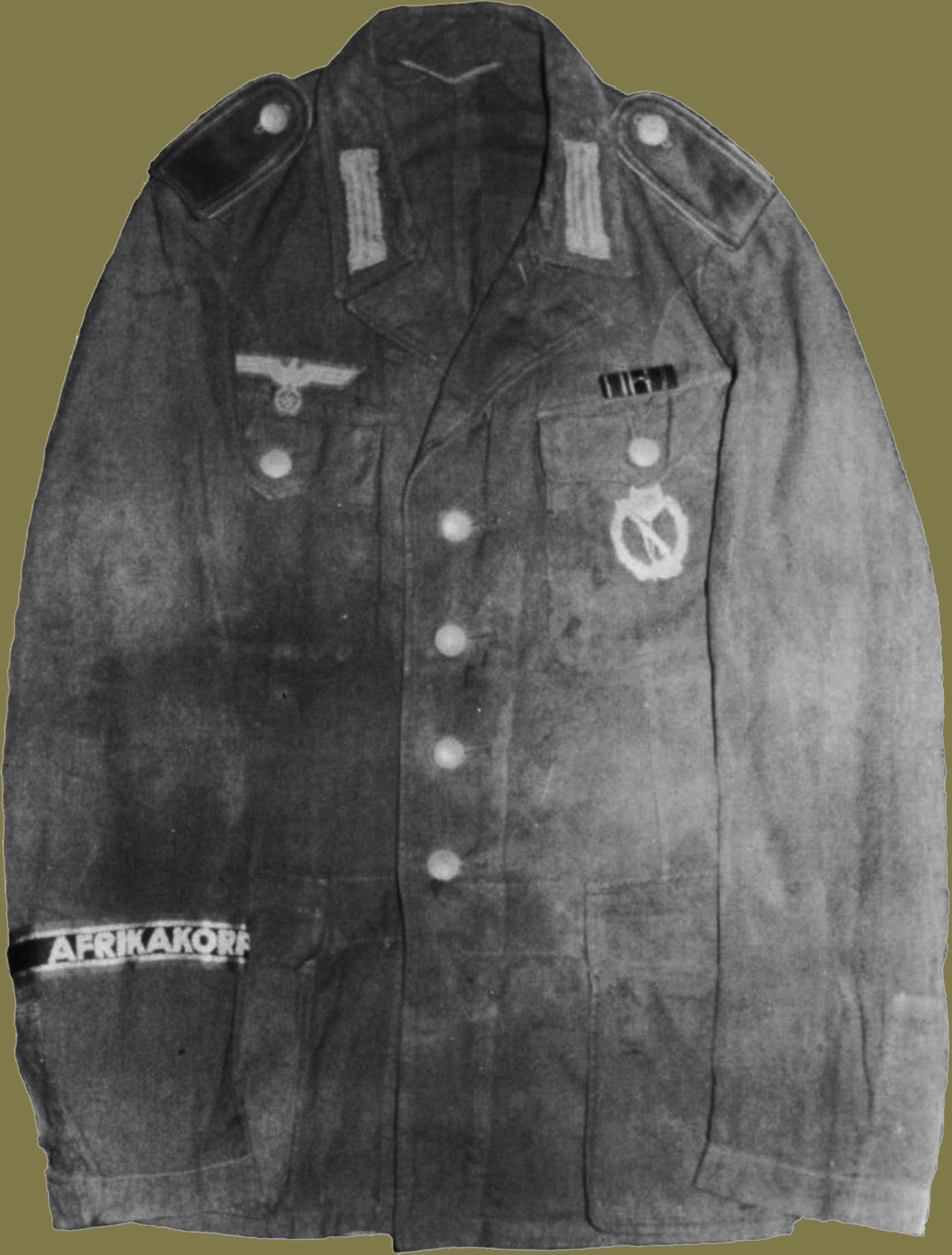 A late-manufacture NCO's tropical Held blouse; the unpleated pockets retain the scalloped flap, however. There is no Tresse round the collar, a not uncommon feature of late examples. (E. L. Collection) 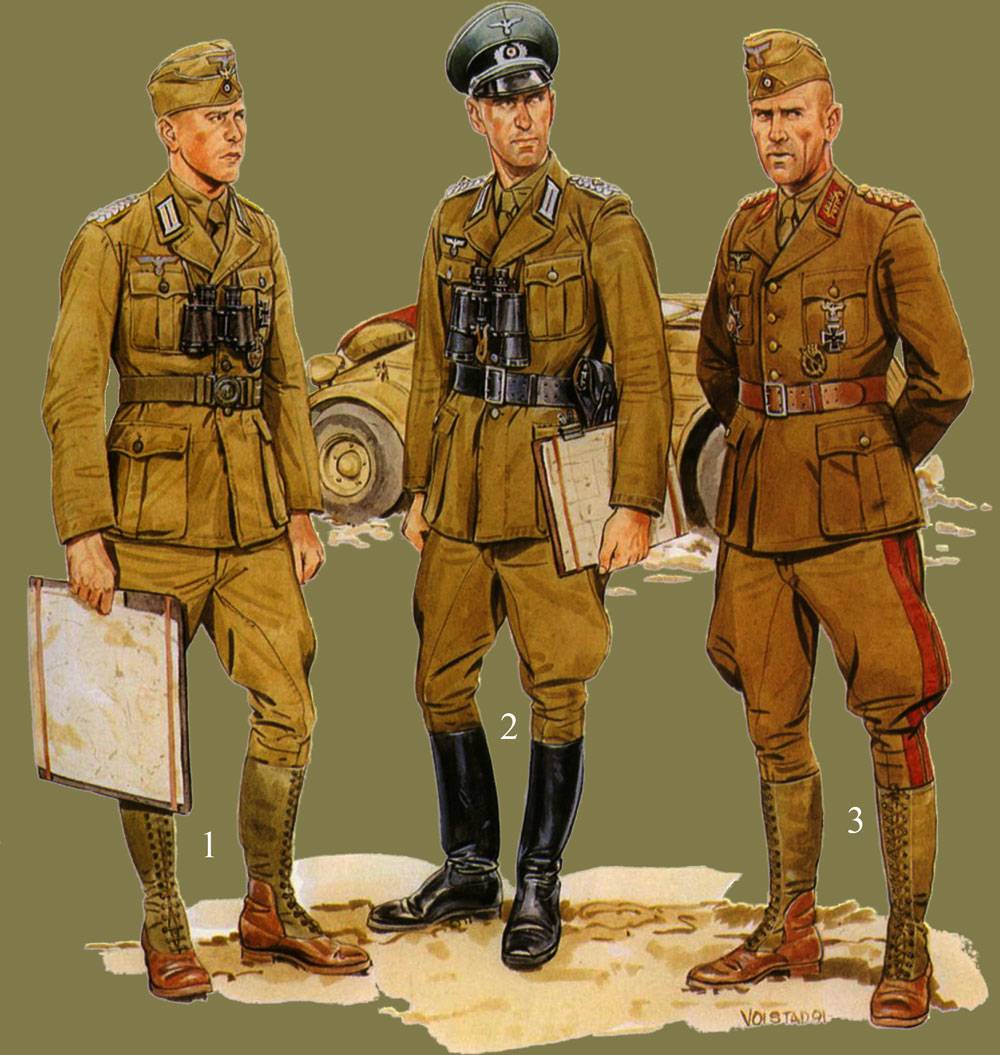 This major from an armoured recce unit of 15 Panzer Division wears the standard tropical Feldbluse to which have been added the hand embroidered collar patches from his field grey uniform; strips of golden yellow cavalry Waffenfarbe appear on the Litzen and the aluminium braid shoulder straps arc sewn to a golden yellow underlay. In this case, however, the standard all-ranks woven breast eagle has been retained. Tropical breeches are worn with high lace-up boots. A webbing belt is worn with the officer's pattern circular buckle; and note tropical issue shirt worn with a tie. The officer's version of the tropical M38 Feldmütze has a golden yellow cavalry soutache over the cockade; between the eagle and the cockade is pinned the gilt 'Schwedter Adler' dragoon tradition badge of Aufklärungs Abteilung 33, formed from Kavallerie Regiment 6. To his left breast pocket are pinned the Iron Cross First Class, and the Panzer Battle Badge in Bronze. 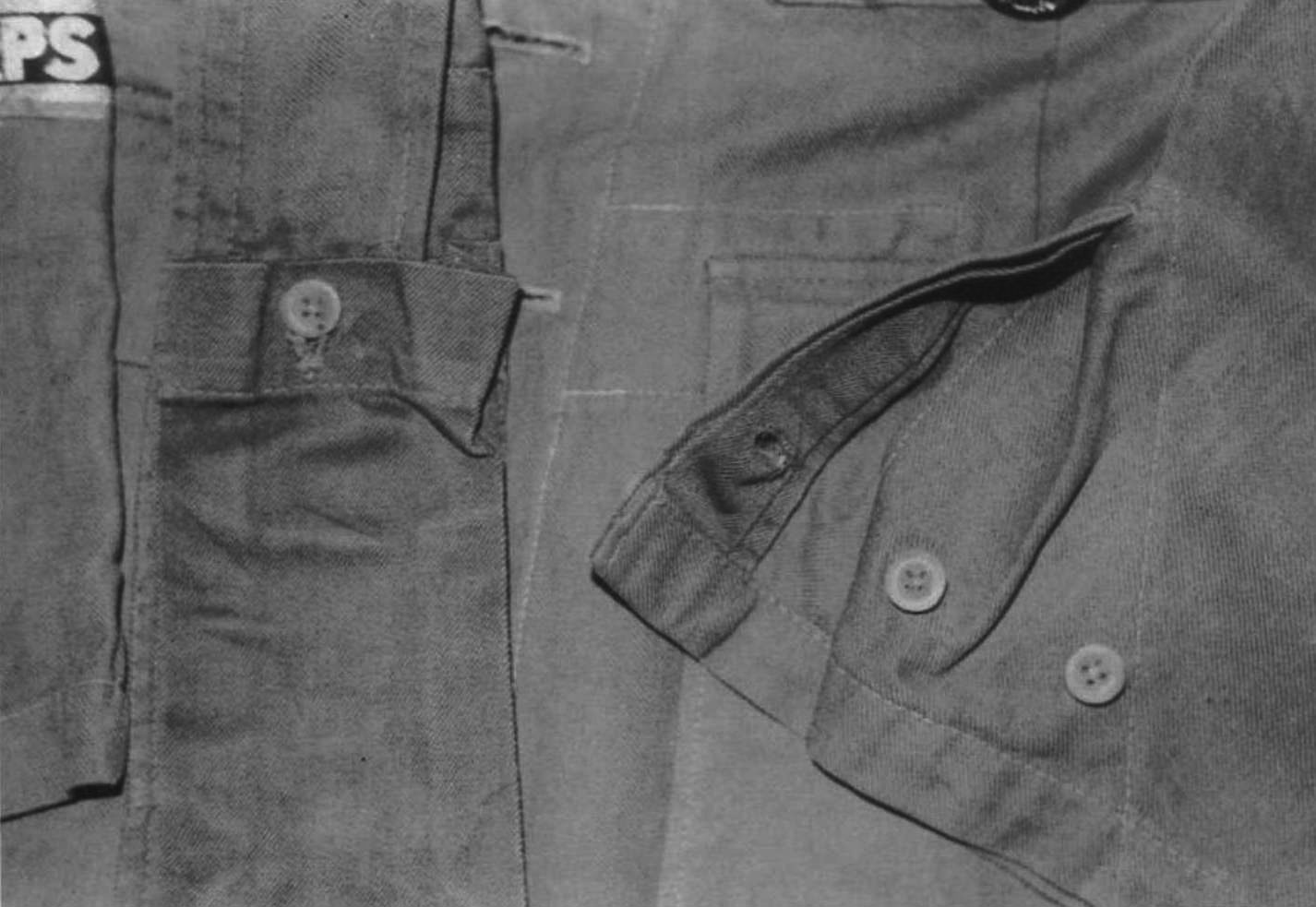 Detail of the held dressing pocket on the interior of the lower right hand front panel, and the adjustable split cutis; the pocket, and the reinforcement to the cuff vent, arc in a green shade of olive contrasting with the browner colour of the body. Such details arc often missing from reproduction tunics. (E. L. Collection) 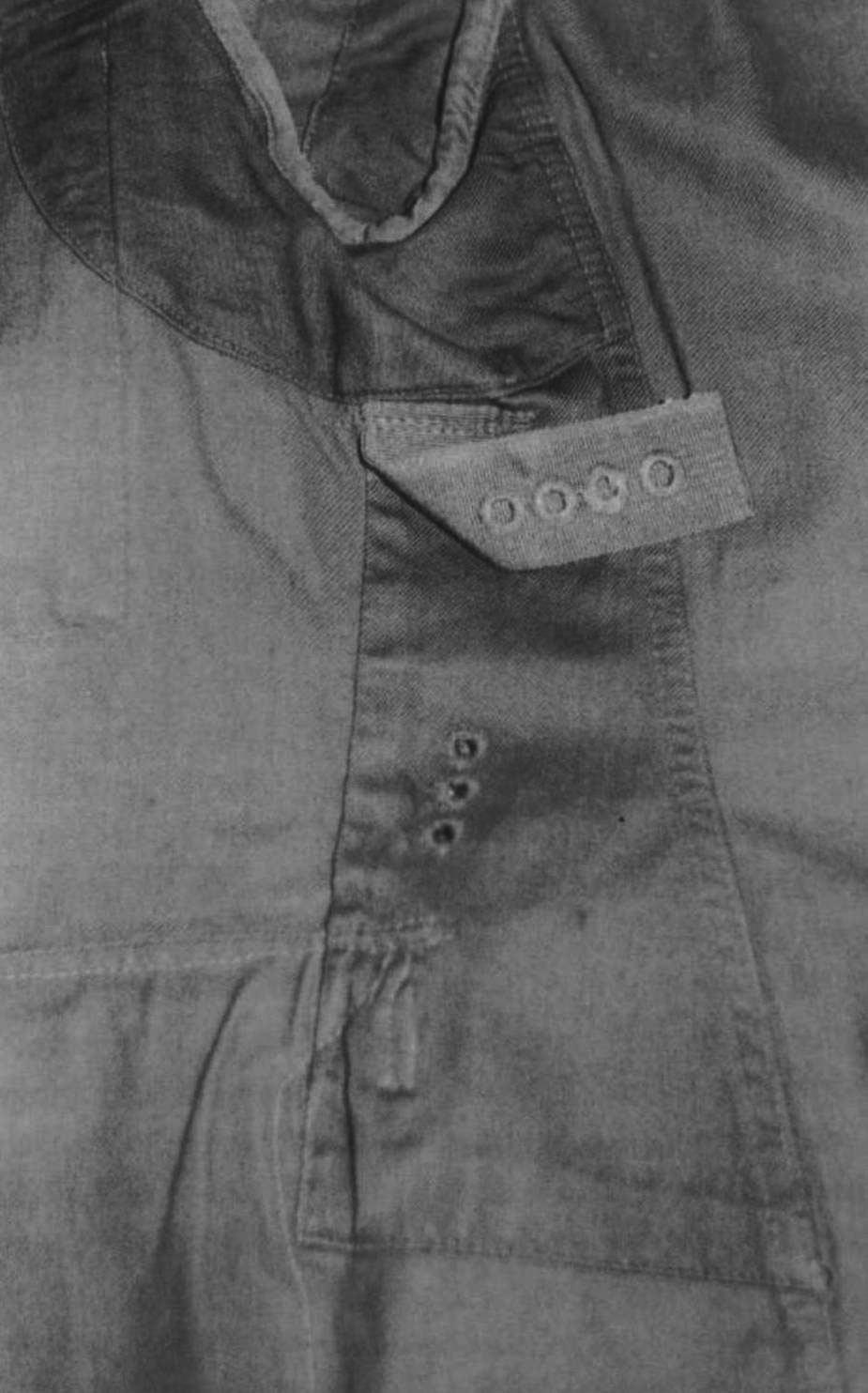 Reinforcement to the interior of the armpit and the side panel, showing the tab which held the belt hook and the alternative holes through which it passed. (E. L. Collection)

Only occasionally seen worn with tropical dress was the standard peaked cap or Schirmmütze. This infantry officer wears his white-piped peaked cap, and has added the full set of continental insignia from his field grey dress to his tropical tunic. His rank of Oberstleutnant is indicated by a single gilt pip on the twisted matt grey braid shoulder strap. Normal continental issue black leather belt and holster arc- worn, as are black jackboots with the tropical breeches.

A general officer of the Afrikakorps resplendent in his privately tailored version of the tropical Feldbluse. Of the same style as the standard pattern, it is cut in superior quality khaki brown woollen cloth and features turn-back cuffs. Full general's insignia from the field grey dress are displayed. His tropical Feldmütze has general's gilt piping and a gilt soutache over the cockade. Bright red general's Lampassen braid is sewn to the legs of the tropical breeches, and high lace-up boots are worn. This Generalmajor has been decorated with the 1939 Clasp to his 1914 Iron Cross First Class, and wears the Infantry Assault Badge; the German Cross in Gold is worn on the right breast pocket. 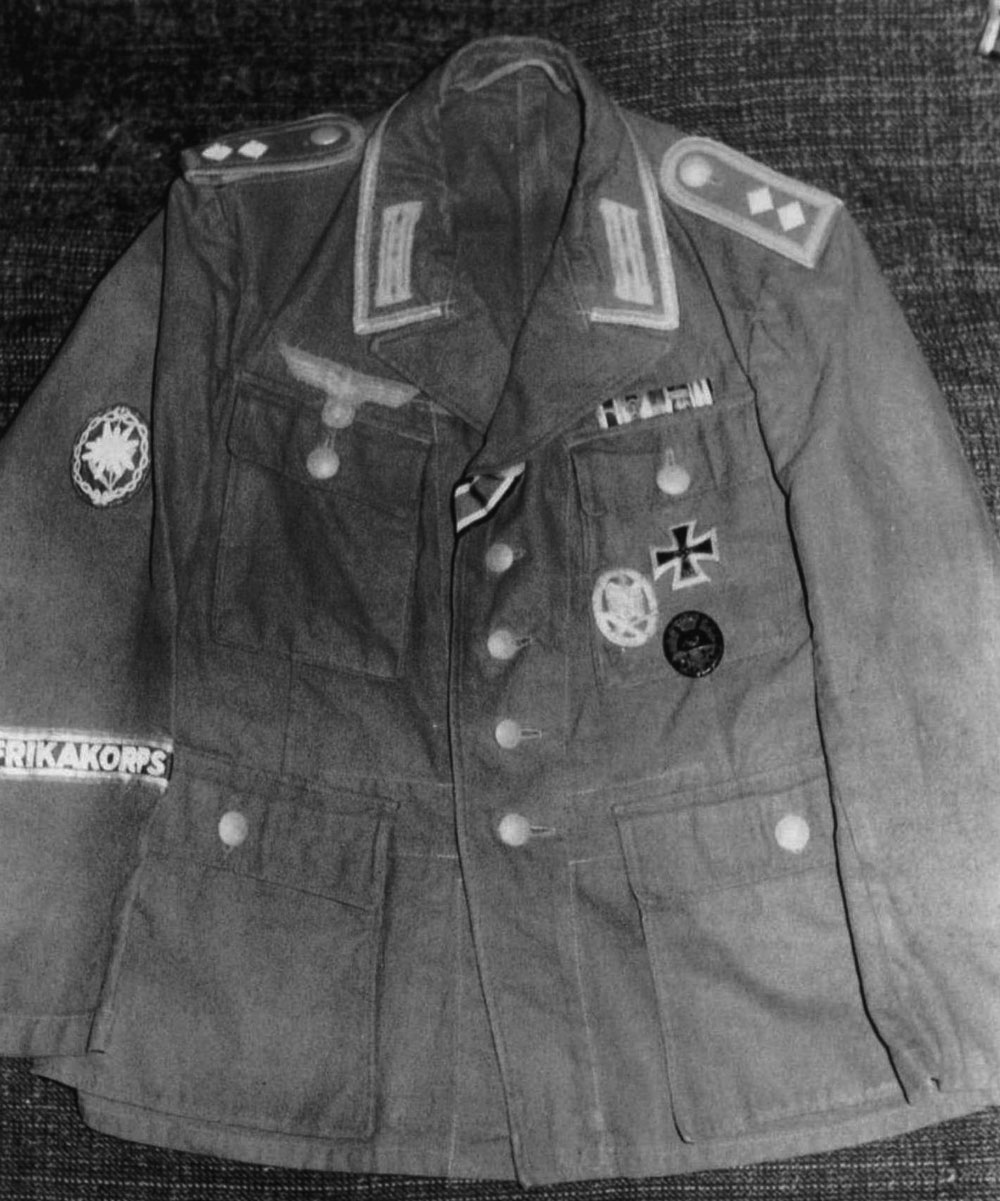 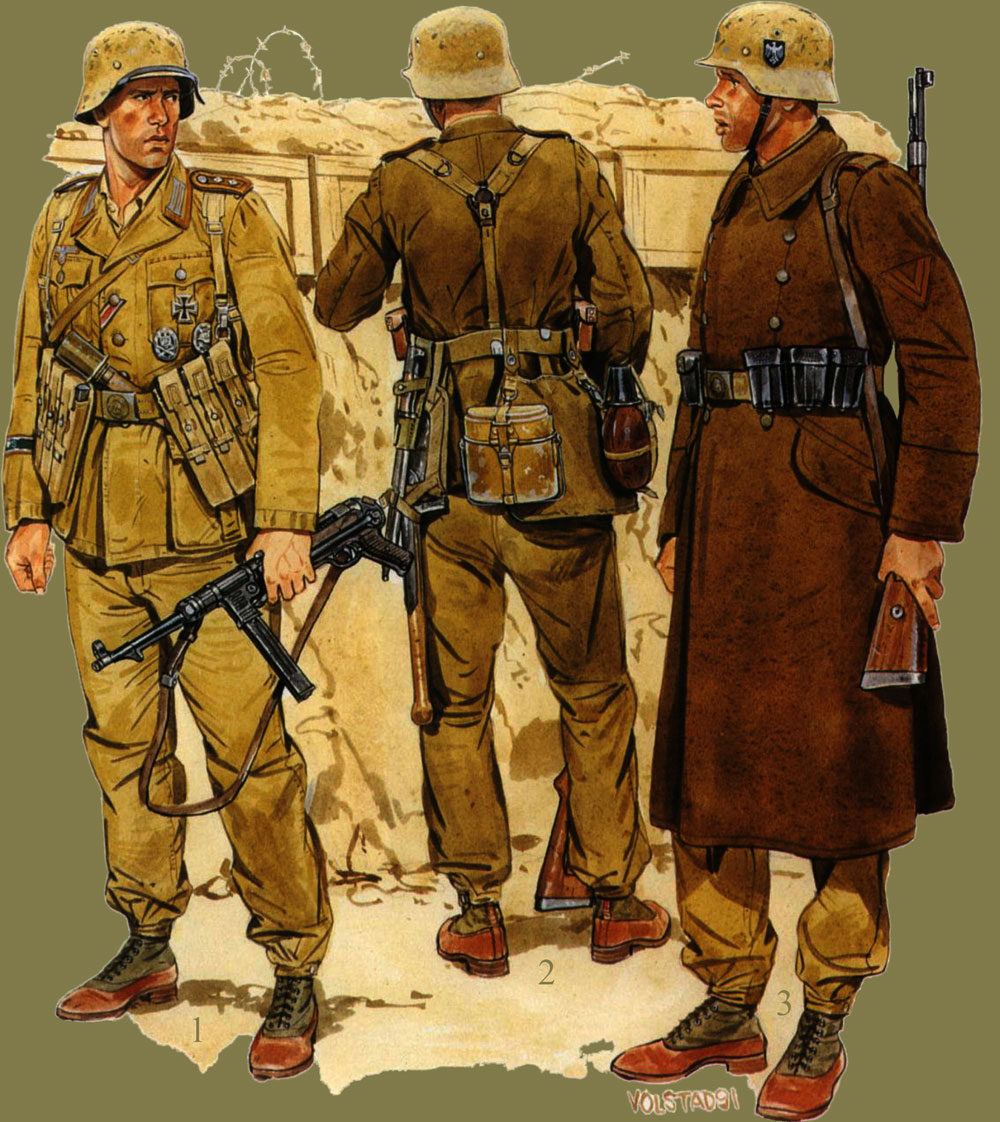 An Oberfeldwebel of assault engineers fully equipped for battle. His M35 steel helmet has been overpainted in a tan colour mixed with sand to give it a rough finish. His Feldbluse collar bears NCO braid, and his shoulder straps are piped in the black Waffenfarbe of the Pioniere. As well as the webbing belt with olive-painted buckle the Oberfeldwebel wears webbing 'Y' straps and webbing ammunition pouches for his MP38/40 machine pistol. A hand grenade is tucked into his waistbelt ready for instant use. His decorations include the Iron Cross Second and First Class, the silver Wound Badge and the General Assault Badge. Long trousers and ankle boots arc worn.

The Oberfeldwebel's comrade, an Unteroffizier, wears a similar uniform, but is armed with a Kar 98k carbine. This rear view clearly shows the various items of kit which make up the soldier's basic combat load.

This soldier is dressed for night guard duty in the tropical greatcoat of heavy brown wool, to protect him from the cold of the desert night; similar to its field grey counterpart, it lacks the contrasting collar. This Obergefreiter from an Artillery unit wears long trousers tucked into ankle boots. Armed with a Kar 98k, he wears the webbing belt but with black leather ammunition pouches. His steel helmet has been carefully repainted in sand paint, avoiding the original helmet decals; few soldiers bothered to be so careful.