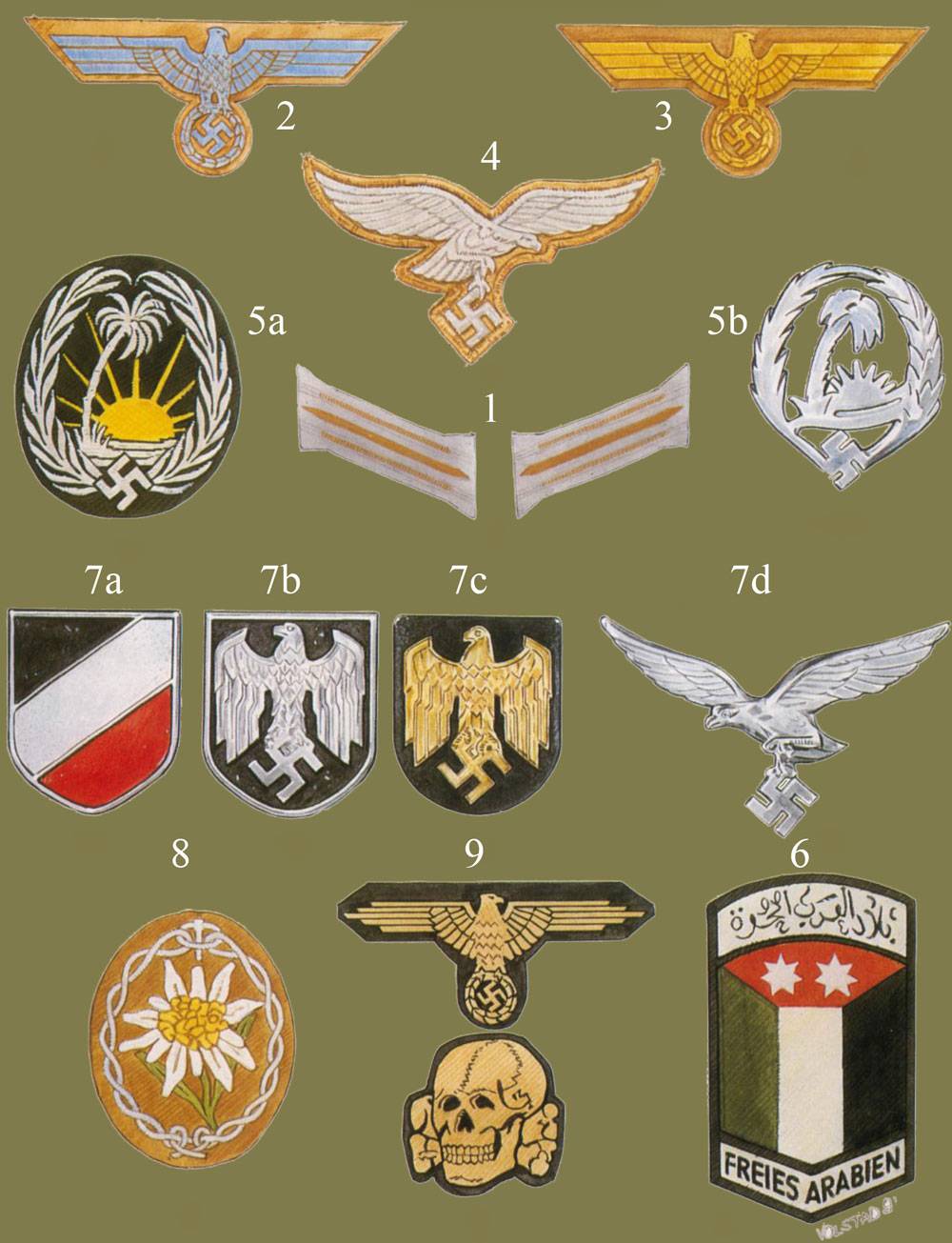 A1 The special tropical version of the Army collar patch was intended for wear by all ranks. It was woven in pale blue-grey artificial silk on a copper- brown backing, and lacked the Waffenfarbe stripe down the centre of each bar which was a feature of the Litzen on the field grey uniform at this period.

A2 The breast eagle pattern for the Army tropical tunic, woven in pale blue silk on an olive backing.

A3 The breast eagle pattern for the naval tropical tunic, machine woven in golden-yellow artificial silk on a tan backing.

A6 The silk woven arm shield for members of the Deutsche-Arabische Lehr-Abteilung.

A7a The national colours shield, in metal alloy, common to the right side of the tropical helmet for all three armed services.

A7b Left hand helmet shield for the Army, the details being in high relief.

A7d The left hand helmet badge for the Luftwaffe, the eagle flying towards the front of the helmet.

A8 The tropical version of the Mountain Troop arm badge, on a tan rather than the normal dark green backing.

A9 The tropical version of the SS cap insignia, in golden tan weave on a black backing. 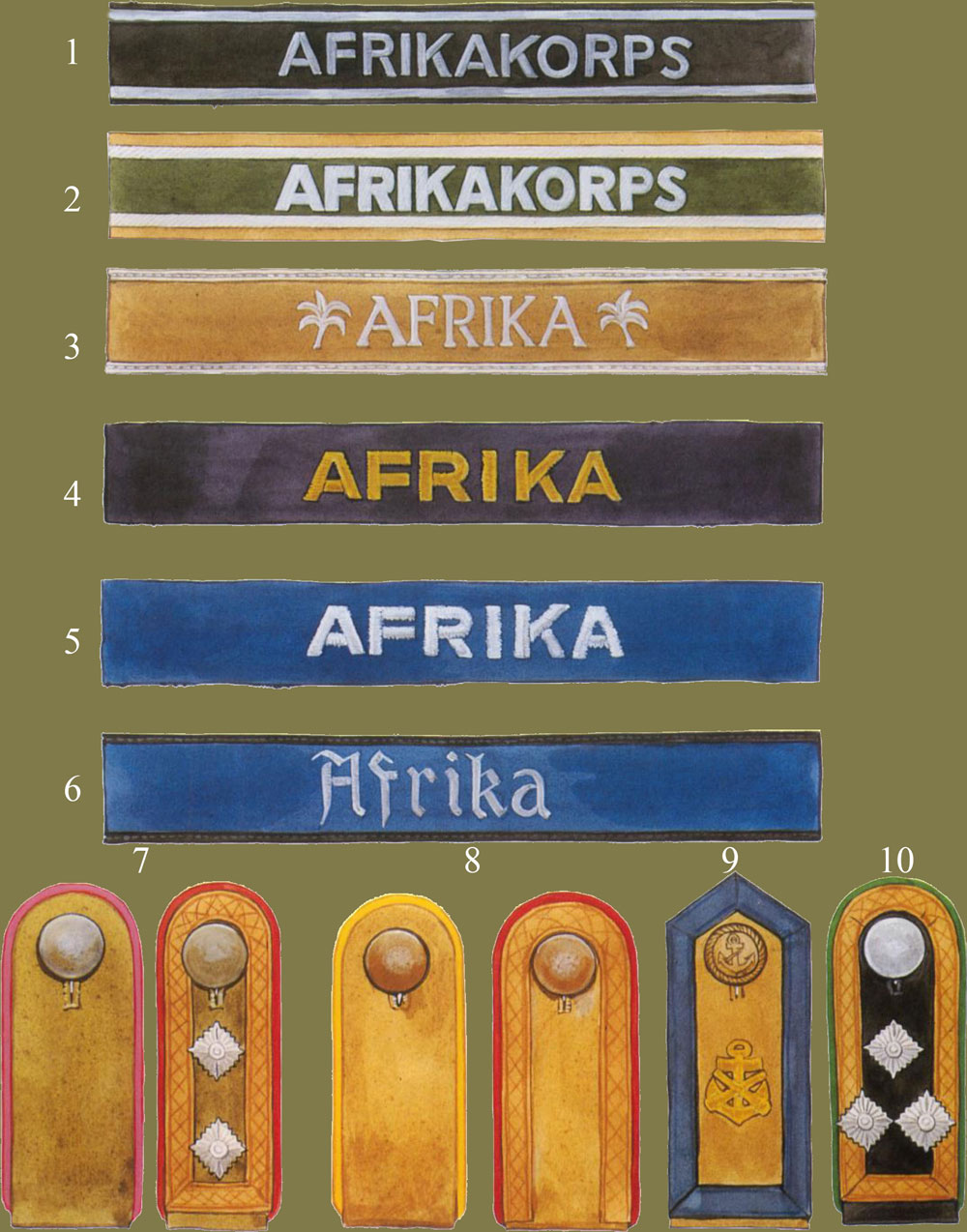 B1 The first type (unofficial) 'Afrikakorps' cuffband, machine embroidered in silver-grey block letters on black cloth. These can be found both with and without silver-grey braid edging.

B2 The official 'Afrikakorps' formation cuffband, woven in aluminium thread on a dark green/tan background. 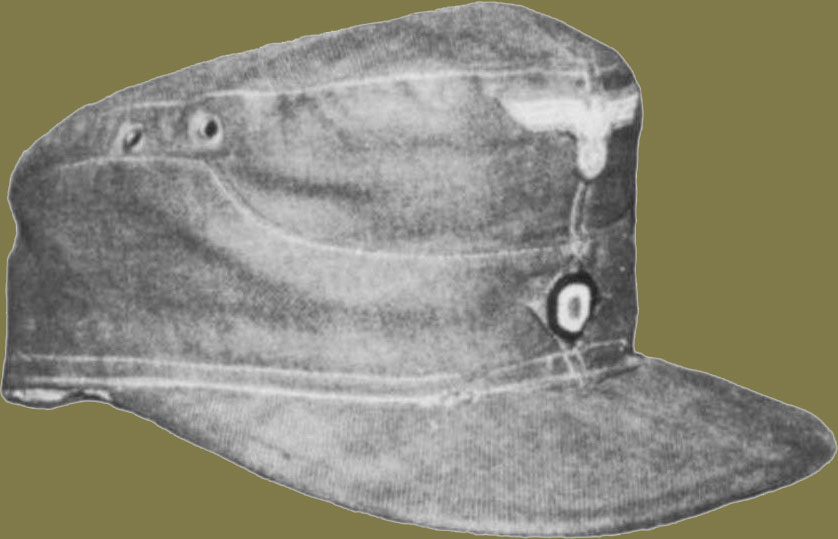 The best known item of tropical field dress: the Army other ranks' peaked field cap, made in dark olive material which could vary towards either brown or green with fading, and lined with bright red. Note the false flap; the two ventilation eyelets; the machine-woven eagle in pale blue-grey on tan, and the flat machine-woven national cockade on a diamond of tan backing. This late example lacks the Waffenfarbe soutache in an inverted V around the cockade. 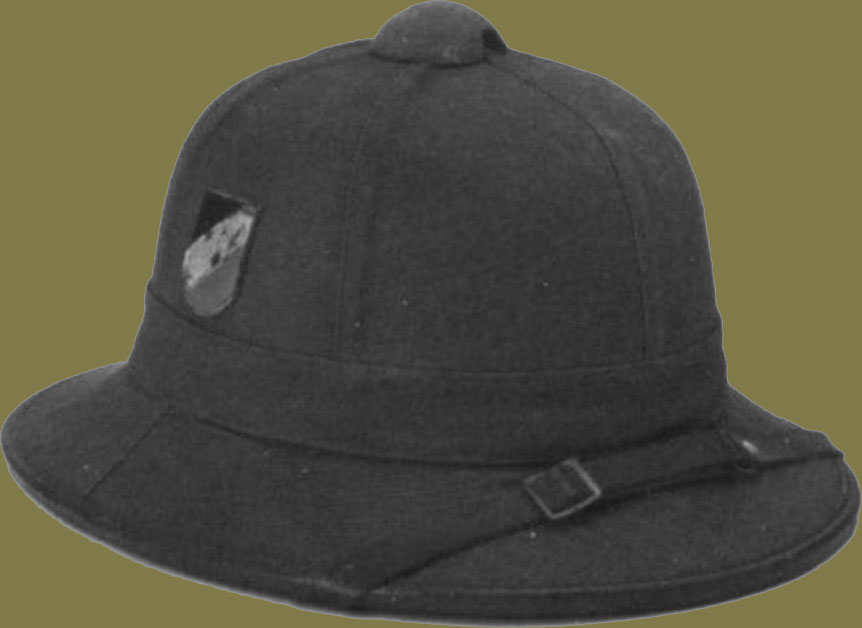 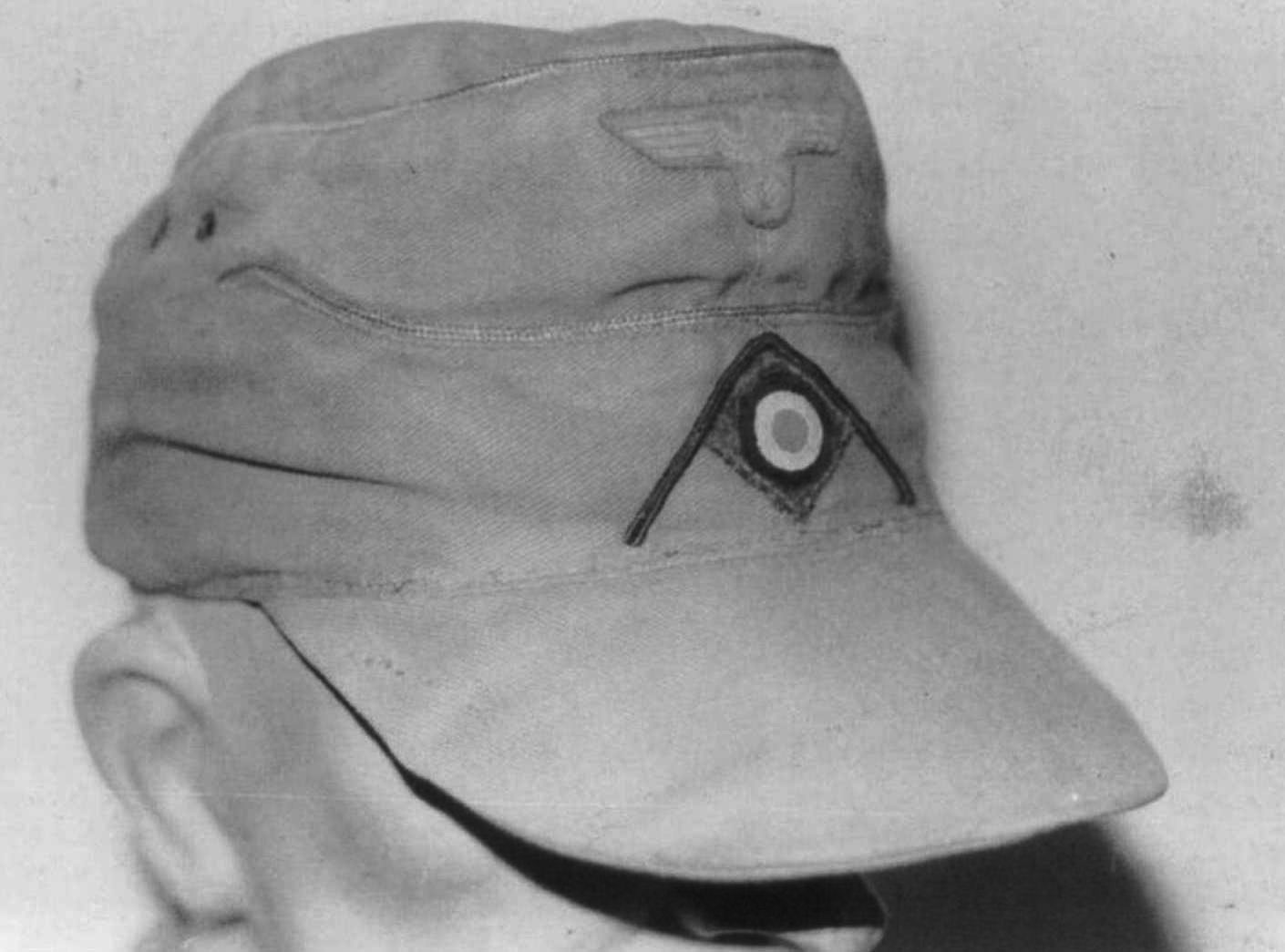 A faded example of an Army officer's tropical peaked field cap, weathered or bleached to a warm sandy tan shade. Note regulation woven aluminium thread piping round the entire crown scam and in the front scallop of the false flap; 'all ranks' eagle and cockade badges; and inverted V of Waffenfarbe soutache, here in Panzergrenadier green. (Derek Craw ford)

B5 A known variant of the Luftwaffe 'Afrika' cufftitle has the legend in Gothic script and black braid edging.

B6 The Naval 'Afrika' cufftitle featured lettering embroidered in gold-coloured thread on a dark blue material.

B7 Other Ranks' and NCO's pattern tropical shoulder straps for the Army; the former bears Panzer pink Waffenfarbe, and the latter red Artillery Waffen-farbe. Note also the copper-brown NCO's Tresse.

B8 Other Ranks' and NCO's tropical shoulder straps for the Luftwaffe, similar to the Army's but in tan cloth. Yellow piping denotes flying personnel or paratroops, and red piping Flakartillerie.

B9 The rarely used Naval tropical shoulder straps were in tan cloth with blue Tresse for Warrant Officers. More usually, the straps from the dark blue or field grey naval uniforms were worn.

B10 Tropical SS shoulder straps, in black cloth but with copper-brown Tresse edging for NCOs. Shown here is the strap for an SS-Unterscharführer. 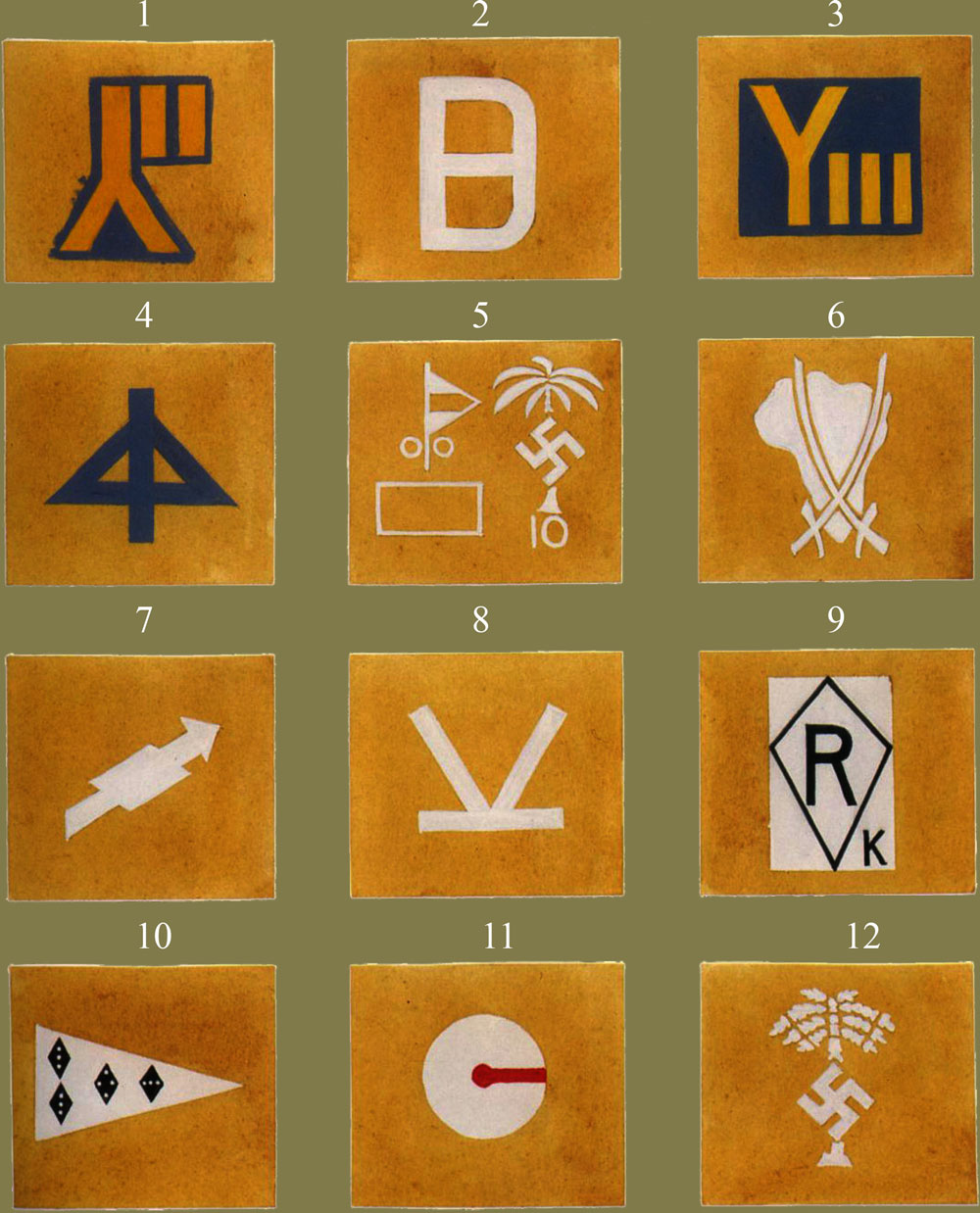 Formation signs of the major units serving in North Africa. These were generally painted in white or yellow on the front glacis plate and rear hull of tanks, and on the front and rear fenders of soft skinned vehicles. Many vehicles arriving from Europe in the standard dark grey colour were suitably camouflaged or overpainted in sand colour, carefully avoiding the markings so that they still appeared on a dark grey background.

C2 Symbol carried by vehicles of 21 Panzer Division in white or yellow.

C3 Symbol carried by vehicles of 10 Panzer Division, in yellow.

C4 Symbol of 15 Panzer Division, usually in yellow or white when on grey background, and dark grey on sand yellow background.

C6 The emblem of 164 leichte Afrika Division, crossed swords over a map of Africa, in white. 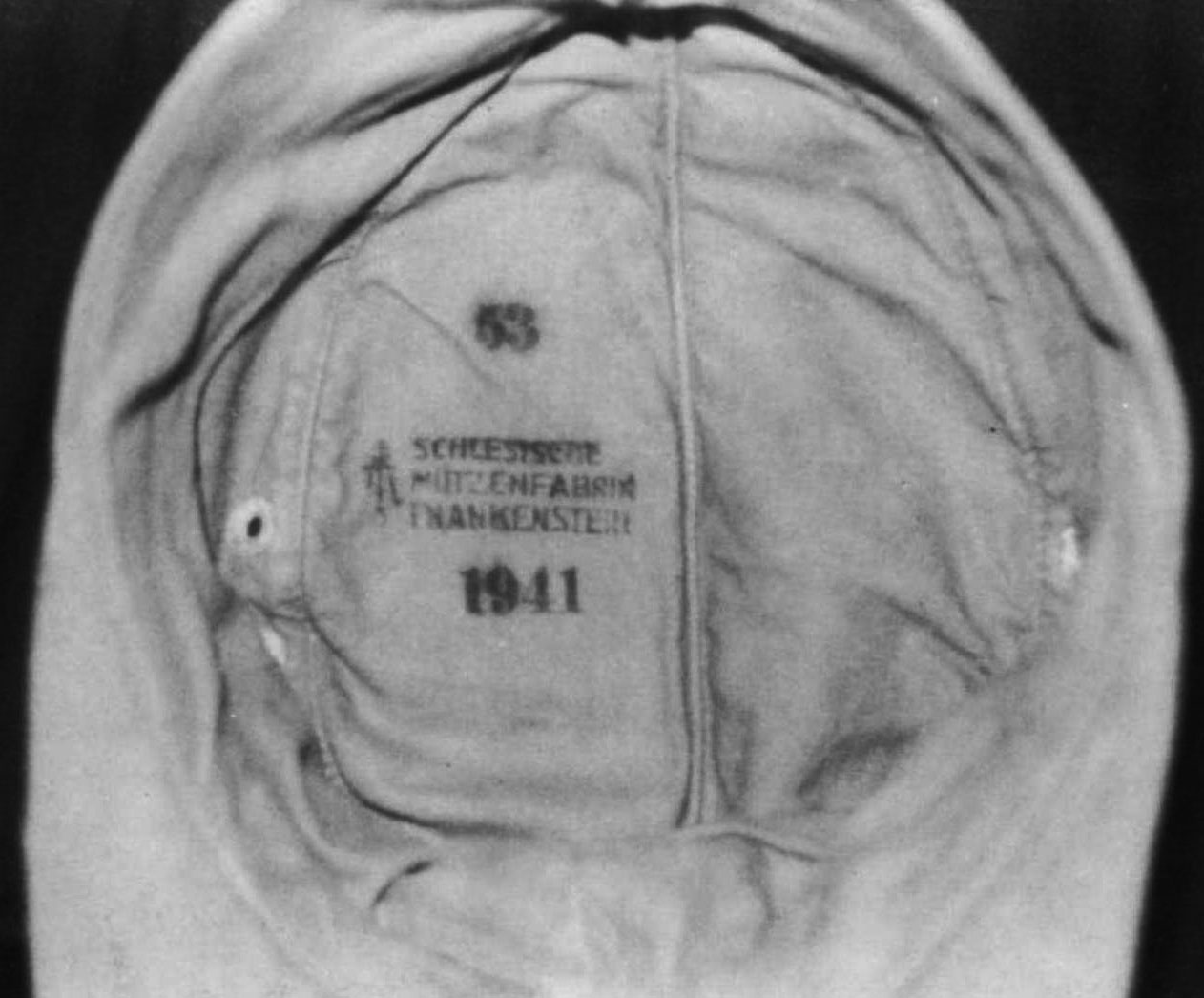 Interior of an other ranks field cap, showing typical black-stamped markings on the scarlet cotton lining. Visible are the size '53' the manufacturer 'Schlesische Mützenfabrik' of Frankenstein, and the date '1941'. (E. L. Collection)

C7 The arrow emblem of 334 Infanterie Division, carried in white.

C8 The emblem of 999 leichte Division, usually carried in white.

C9 The emblem of the Ramcke Parachute Brigade, in black on white backing. The initial at bottom right is that of the individual battalion commander, in this case Kroh.

C11 The Hermann Göring Division used a 'clock' symbol to indicate the sub-unit. In the example given, a white disc bearing a red 'hand' in the 3 o'clock position indicates 3 Batterie, I/Flak Regiment 'HG'.