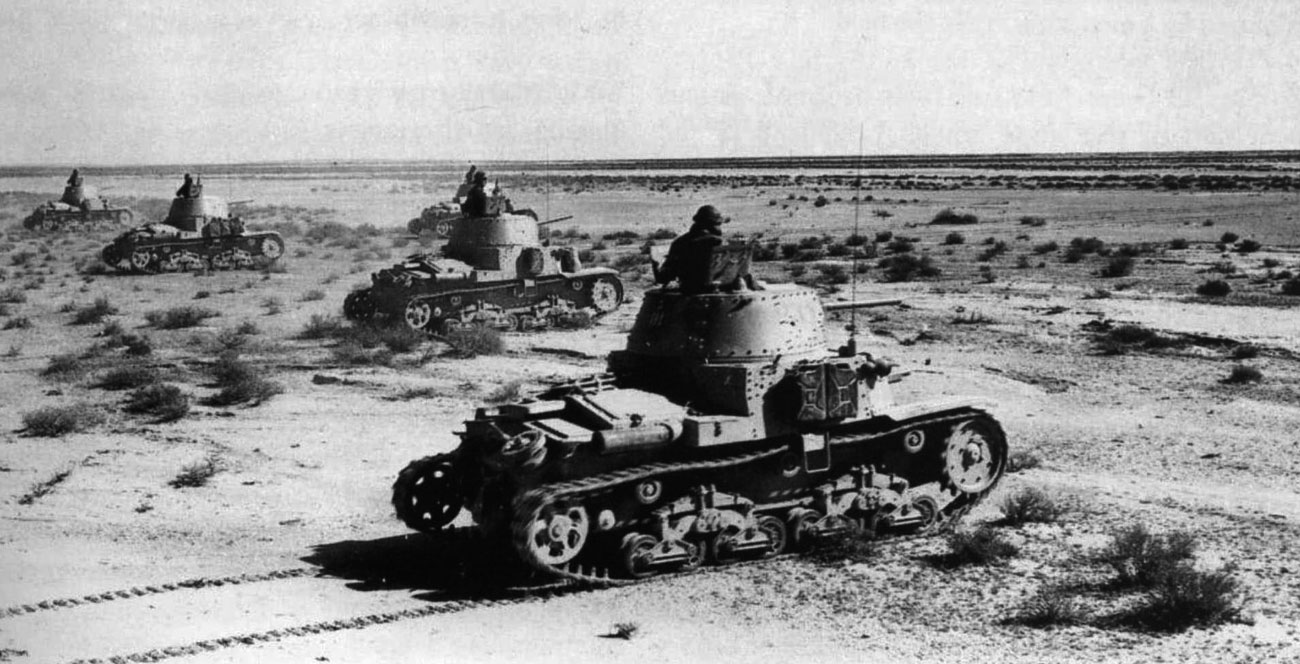 Italian M13/40 tanks of X Tank Bn. near Mechili, March 1942. Throughout his campaigns Rommel was forced to rely on the Italian Army for much of his armour; even at El Alamein 259 of his available total of 497 were out-of-date Italian types, easy prey for enemy weapons. 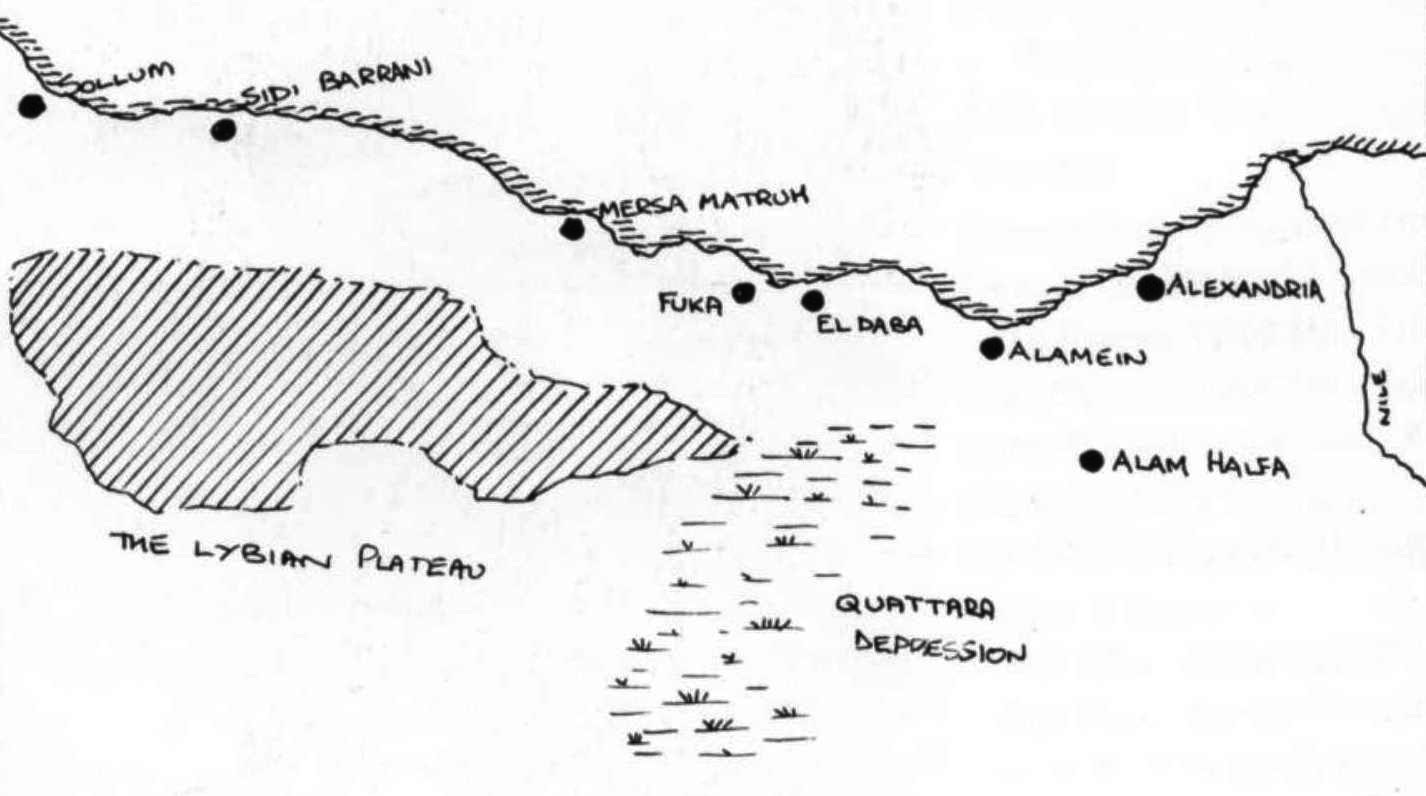 The furthest extent of Rommel's advance eastwards, halted at the line constructed by Auchinlcck and Montgomery south from El Alamein. Denied room to manoeuvre by the Quattara Depression, and means to do so by his long and vulnerable supply lines across the Mediterranean, his forces were relentlessly pounded into withdrawal in October-November 1942. Even so, the DAK conducted a masterly retreat up the coastal corridor, and avoided further destruction.

This clearly shows the vast 'tail' of support required by a modern army in the field.

On the upgrading of the Korps to a Panzer-gruppe, the Deutsches Afrikakorps became a component part of the larger whole. Command of the Deutsches Afrikakorps passed to Generalleutnant Ludwig Crüwell until March 1942, when he was succeeded by Generalleutnant Walter Nehring. Nehring was wounded in action in August 1942 and evacuated, but returned in November to take command of German forces in Tunisia. These forces officially became known as XC Korps on 19 November. This short-lived command lasted only until 9 December when Hitler decided to upgrade the command structure in Tunisia and announced the formation of Panzer-Armeeoberkommando 5 under Generaloberst Jürgen von Arnim. XC Korps being absorbed into the new structure.

In December 1942 the Armeeoberkommando 5 order of battle was as follows:

By March 1943 it had expanded considerably, to include the following:

In February 1943 it was decided that the numbers of personnel and units in North Africa had expanded so much that a major command formation was necessary. On 23 February it was announced that Generalfeldmarschall Rommel was to take command of Heeresgruppe Afrika which would consist of both the 1 italienische Armee and Panzer-Armeeober-kommando 5. The Axis forces were now at last under a unified command, just under three months before they would unconditionally surrender.

In addition to the major commands listed above a considerable number of Kampfgruppen were formed, ranging from small units of only two or three companies to major forces of divisional strength or greater. These were usually formed from components of the major units already mentioned, for specific tasks such as local counterattacks, rearguard actions, etc. Because of the temporary nature of these formations they arc not covered in this work.

Although the desert war was of course primarily a land battle, the Luftwaffe and Kriegsmarine played essential supporting roles. The German Navy had no major warships based in North African ports. Its major functions in this area were coastal security and escort duties for supply convoys from Italy. Main naval bases in North Africa were located at Bizerta, Tripoli, Benghazi and Tobruk.

Night fighter units also saw action in North Africa in defence against British bombing raids, both 1/Nachtjagdgeschwader 3 and 2/Nachtjagdgeschwader 2 serving in this theatre. Other Luftwaffe units which served at one time or another in support of Rommel's Afrikakorps included II/JG 27, and elements from JG77, JG2, JG26, JG53, ZG1, SG1, SG2 and KG26.

Although no Waffen-SS units served in North Africa, the Sicherheitsdienst (SD), the security arm of the SS, did have a base in Tunis, where they worked in close collaboration with the local police (and no doubt, the Geheime Feldpolizei) against subversives, black marketeers, etc. Photographs do exist of SS personnel wearing the ' Afrika' commemorative cufftitle, proving their service in North Africa. 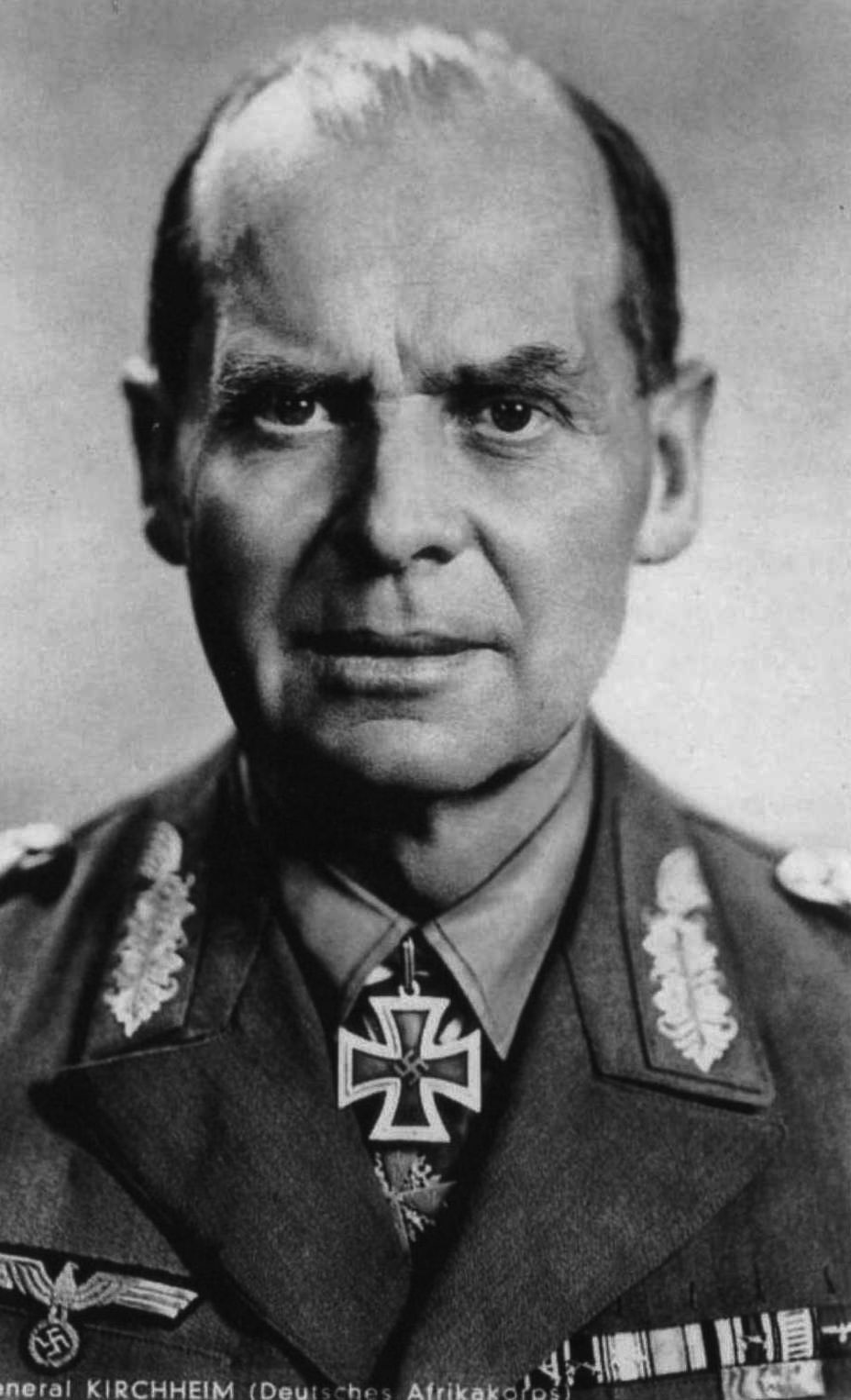 Typical example of a senior officer's privately tailored tropical dress uniform in brown wool; Gen. Heinrich Kirchheim - awarded the Knight's Gross in May 1941, and at one point commander of the Italian 'Brescia' Division - wears the full set of hand-embroidered gold bullion insignia from his continental uniform.

Commanders of the German Forces in North Africa

The first of the 'African' divisions, 5 leichte was specifically assembled for service in North Africa. It was constructed around cadre personnel from 3 Panzer Division, including Panzer Regiment 5. The first elements of the division arrived in North Africa on 14 February 1941, with its armour arriving by the end of the month. During the next few months the division took part in many major battles including the drive to Egypt and the attempt to take Tobruk. The division was strengthened by the addition of 104 Panzer Grenadier Regiment from 15 Panzer Division, and was retitled 21 Panzer Division from 1 October 1941.

The division took part in the defensive actions against the British 'Crusader' offensive in November 1941, which virtually decimated the British 7th Armoured Brigade. Despite early successes, however, the German forces slowly disengaged, eventually pulling back to El Agheila. In early 1942 21 Panzer Division took part in Rommel's offensive leading to the fall of Benghazi on 29 January. Subsequently it acquitted itself well during the attack on the Gazala Line and the capture of Tobruk. 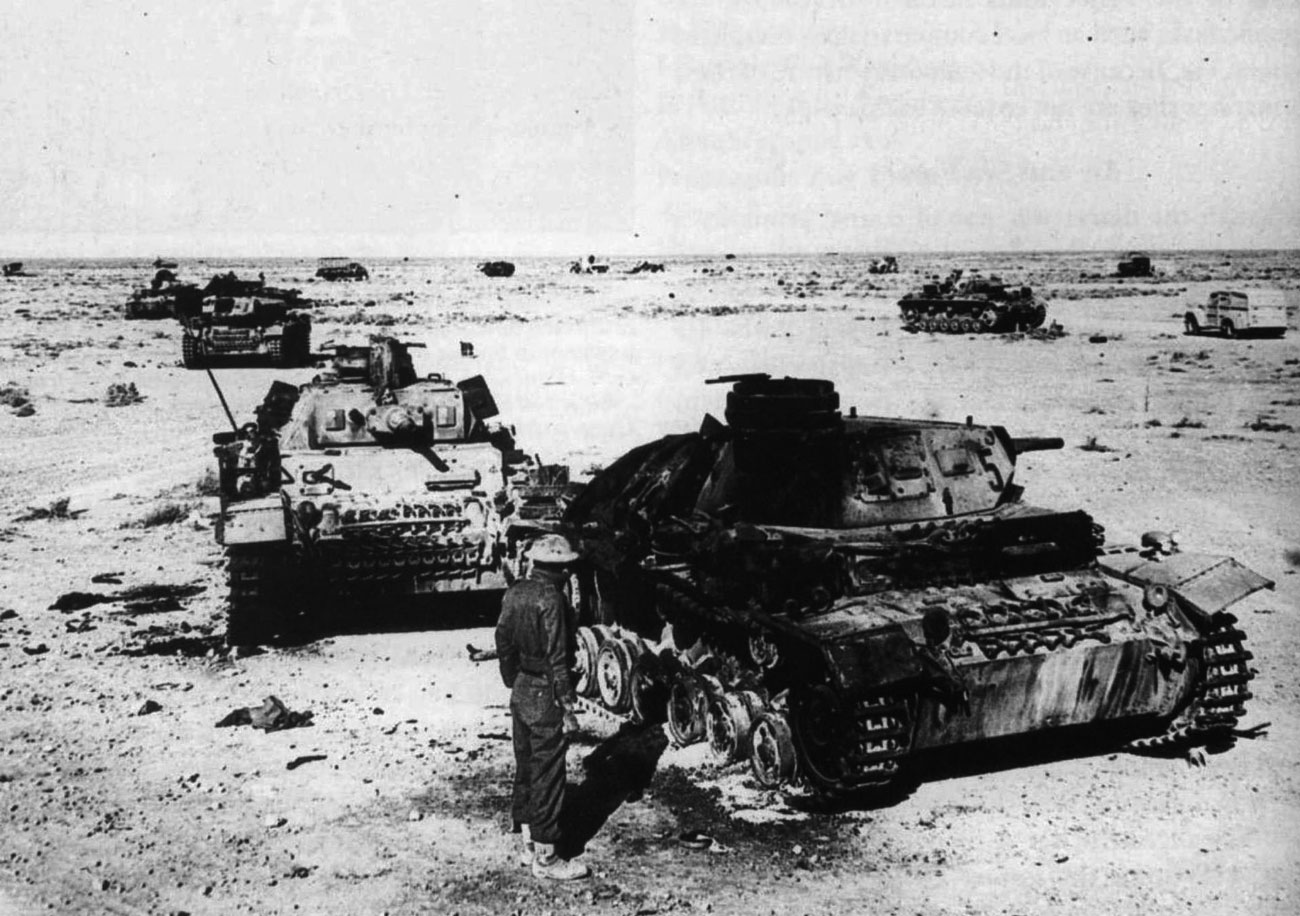 Damaged and abandoned Panzer IIIs of 15 Panzer-Division. Possession of the held at the end of a battle made a great deal of difference - the enemy was denied the opportunity to recover and repair equipment, which became a total loss, while many of the victor's own could he put back into commission. 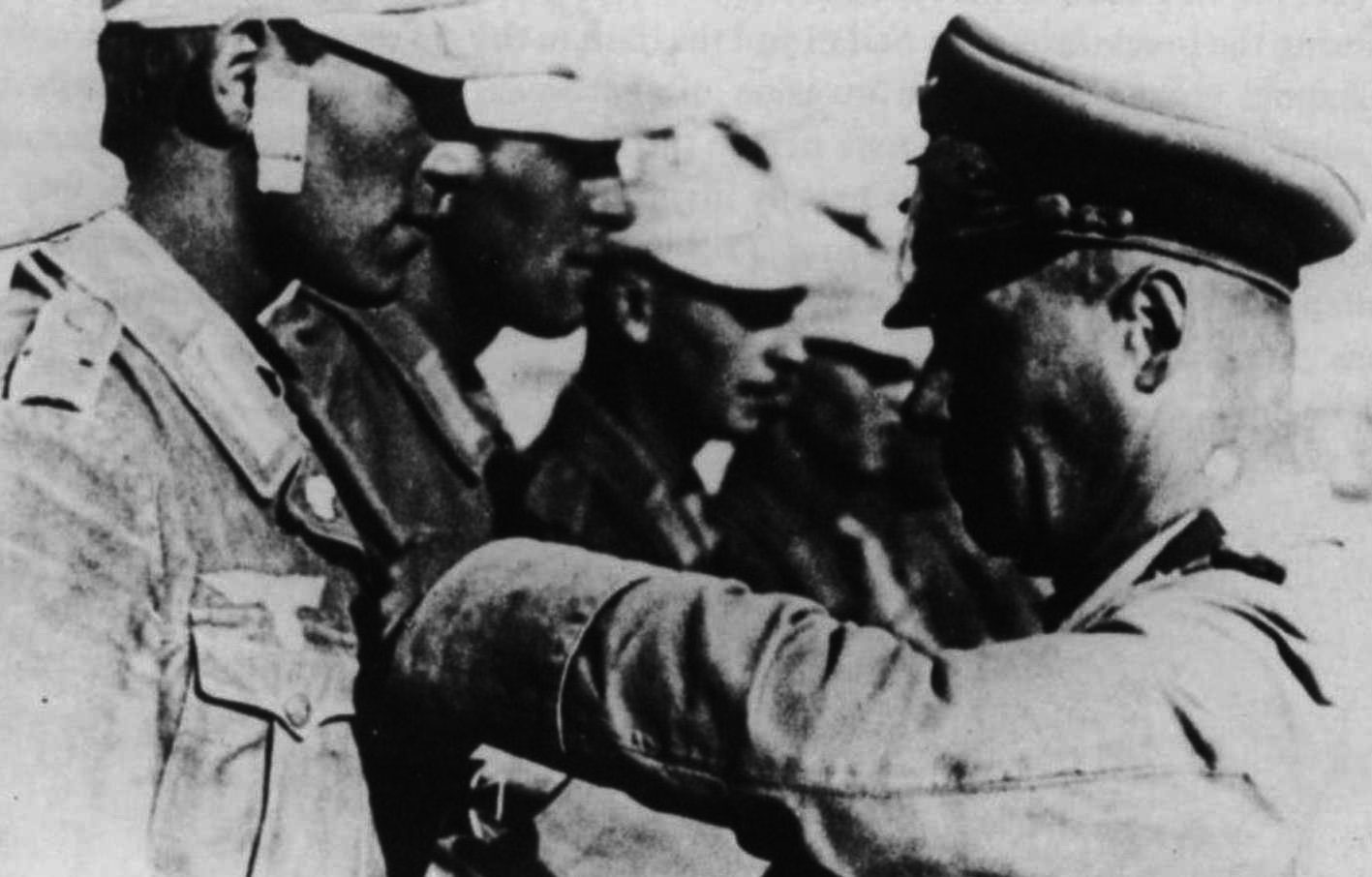 Finally checked by the British at El Alamein in July 1942, it was badly battered during the British 'Lightfoot' and 'Supercharge' operations in October and November 1942, being left with only a handful of tanks. During the subsequent retreat it served as rearguard for the Axis forces, enhancing its reputation by its tenacity and steadfastness during retreat.

By February 1943 the division had been strengthened considerably and had some 90 tanks. It took part in the battle for Sidi Bou Zid on 14/15 February and captured Sbeitla on 17 February. The division was part of Rommel's forces for the successful attack at Kasserine Pass before being halted at Sbiba. The remaining weeks of its life were spent in defensive actions before surrendering between 11 and 13 May.

Formed in the summer of 1939, 10 Panzer Division played a minor part in the Polish Campaign before, in 1940, proving itself as part of Guderian's XIX Korps during the breakthrough at Sedan and the dash to the Channel coast. During the invasion of the Soviet Union, 10 Panzer Division took part in the attack on Minsk and Smolensk. It was heavily involved in the defensive actions against the 1941/42 Soviet winter offensive, successfully holding Rzhev against numerous enemy attacks.

Badly battered, the division was withdrawn to France for refitting, and took part in the occupation of the Vichy-controlled sector in November 1942 before being transferred to North Africa and immediately thrown into the battles for the Tunis bridgehead. Being recently refitted and at full strength, it proved invaluable. The division took part in the battle for Sidi Bou Zid split into kampfgruppen, and achieved considerable success. During the retreat in April/May 1943 the division served as a mobile reserve. Weakened in fierce fighting, the division was eventually pushed back into the hills north of Bizerte, surrendering on 9 May 1943. Among the units held on the division's order of battle was an assault regiment from the Luftwaffe's 'Hermann Göring' Division. 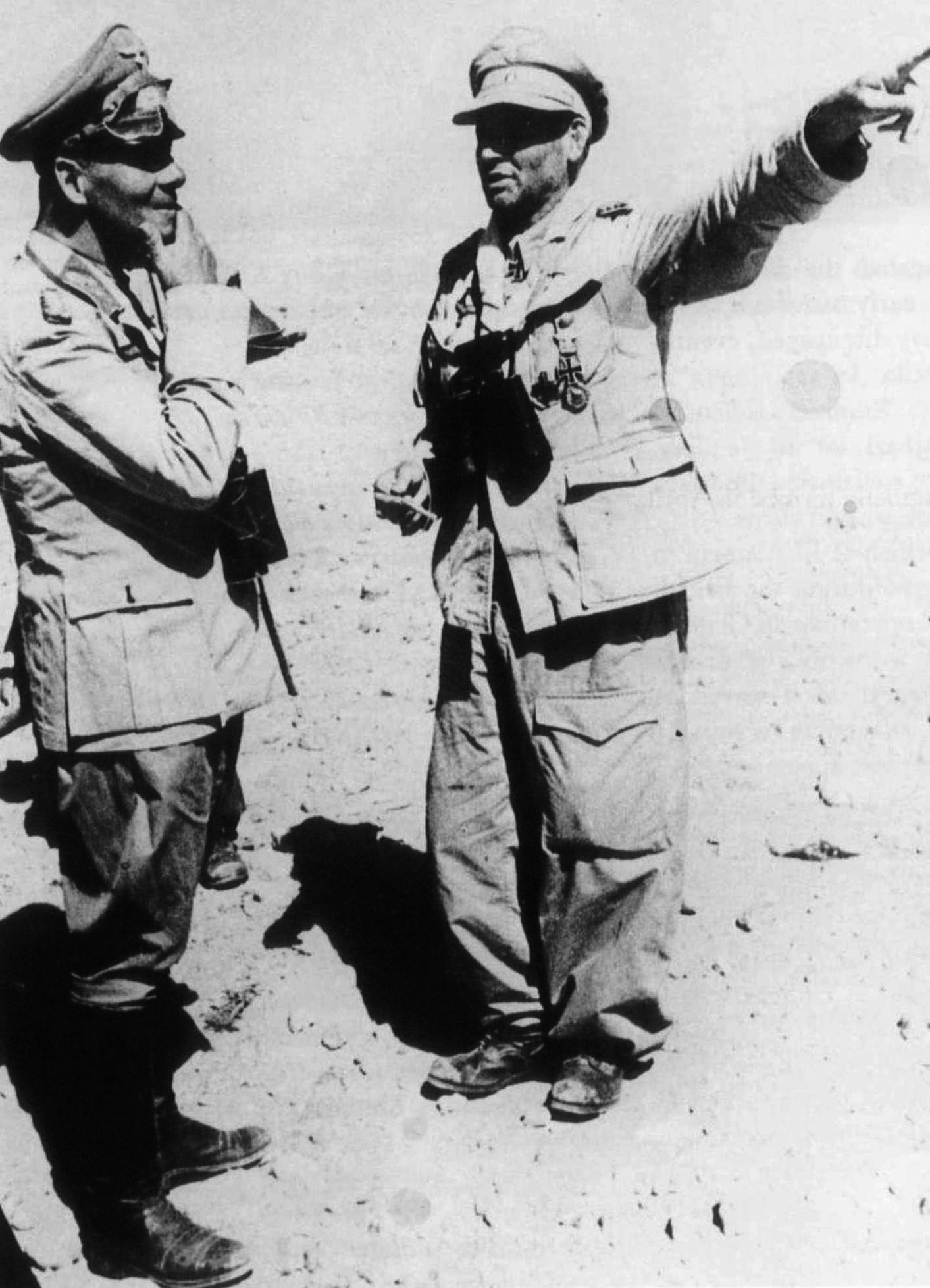 A well-known but interesting shot of Rommel with Generalmajor Ramcke, summer 1942. The paratroop commander wears the very loose-cut Luftwaffe tropical trousers with left thigh pocket; the shoulder straps and gold-bullion-on-grey breast eagle from his continental uniform arc attached to the tropical held blouse, lie wears the 'Hermann Meyer' cap; the cockade on the band is worn alone, without the traditional winged oak leaf wreath. (Josef Charita)