This veteran division was originally formed in April 1936 as 33 Infanterie Division based in Kaiserslautern, composed of 104, no and 115 Infanterie Regiments. The division saw action during the fall of France before being reformed as a Panzer Division in the autumn of 1940.

The division arrived in North Africa in April 1941, just too late to take part in Rommel's capture of Benghazi. By the end of June, however, it was in action in defensive moves against the British 'Brevity' and 'Battleaxe' operations around Tobruk. In November 1941 the British launched Operation 'Crusader' and 15 Panzer Division found itself in the thick of the fighting. It was reduced to a handful of operational tanks and had to be withdrawn for refitting.

The division was reinforced with shipments of fresh armour from Europe, and in January 1942 15 Panzer went on to the offensive during Rommel's successful attempt to take Benghazi; in May it took part in the battles on the Gazala Line. Having taken Bir Hacheim, Rommel once more unleashed his forces on Tobruk, and within five days the port had fallen. There was to be no rest for the men of 15 Panzer, however, as Rommel's forces pursued the retreating British over the border into Egypt. By 1 July 15 Panzer was involved in the first battle of El Alamein. This first attack, on well-prepared British positions, was unsuccessful, as were subsequent attacks on Alam Haifa on 30 August and 1 September. On 2 September, Rommel abandoned his attack.

On 23 October Montgomery commenced his counter-offensive, and in the battles which followed 15 Panzer Division was decimated. By early November Panzer Regiment 8 had lost all of its tanks as well as its regimental commander. Forced to retreat into Tunisia, it went into reserve under 1 italiensiche Armee. 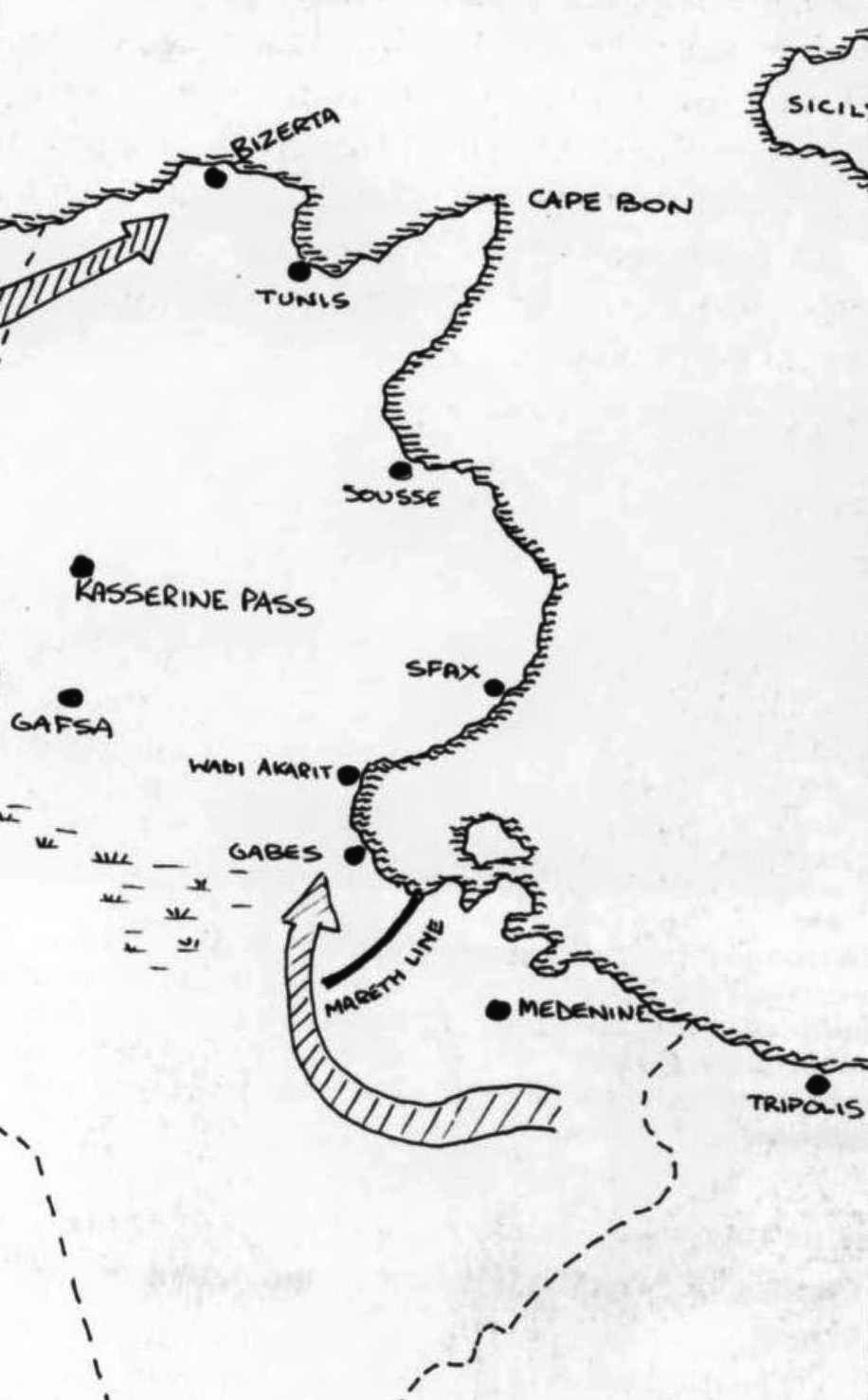 The end in Africa: British forces from Tripolitania in the south-cast, and Anglo- American and French forces from Algeria in the west, forced the Panzerarmee slowly into the north-cast of Tunisia, where they were eventually compelled to surrender in May 1943. Very few escaped to Sicily, and the loss of a quarter of a million men was as serious a blow to the Axis as Stalingrad. 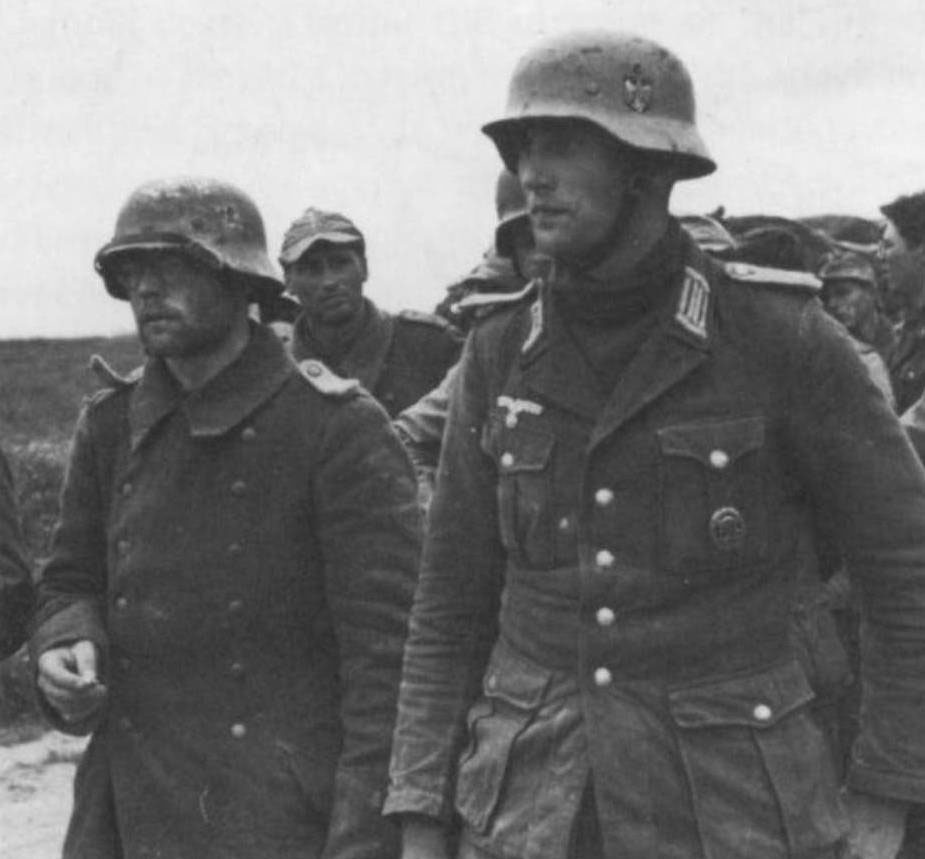 German officer prisoners wearing a variety of uniform items. Note the all-brown tropical greatcoat; sand-painted helmets both with and without the decal left visible; continental breast eagle and collar patches; and use of a sweater under the tunic. (IWM)

The division, with much of its armoured strength replenished, went on to the offensive at Medenine on 6 March 1943 and gained initial success, but British superiority in numbers soon pushed the Germans back again, with the loss of 24 of the division's precious tanks. On 22 March the division, still part of the German reserves, was again committed to action in a counterattack against the British at Wadi Zigaou, and with some success. When, on 27 March, a strong Allied force broke through the German lines at El Hauma 15 Panzer Division was thrown into the line to halt them. By now, however, it could field only ten serviceable Panzers, and was pushed back relentlessly. By early May the Division was cut off in a pocket alongside Division von Manteuffel and 10 Panzer Division. On 9 May, 15 Panzer Division surrendered to the British.

This division was formed in August 1941 in Libya as 'Afrika Division zbV' from a number of existing units already serving in Africa, and included 155, 200 and 361 Motorised Infantry Regiments. Its first combat followed in the battle for Tobruk on 21 November 1941 where it acquitted itself well. One week later its title was changed to 90 leichte Afrika Division.

'90th Light' was involved in the retreat from Cyrenaica and the recapture of Benghazi in January 1942. It was also committed to the attack on the Gazala Line from 26 May to 14 June and the sieges of Got el Ualeb and Bir Hacheim. On 29 June the British fortress of Mersa Matruh fell to a German force which included 90 leichte Division. Constant action, however, saw the division reduced to some 1,600 men by the end of June. Nevertheless, it fought again during the first assault on El Alamein.

In October 1942, when Montgomery launched his long-awaited offensive, the division was holding the northernmost coastal sector of the German line. It suffered dreadful losses, as indeed did most of the German forces, losing, on average, at least half their strength. For the last few months of the desert war, the remnants of the division acted as Rommel's rearguard, constantly involved in defensive actions. By early April 1943 its strength was estimated at 5,700 men. On 12 May it finally surrendered north of Enfidaville.

This division was raised in the winter of 1939/40 in Königsbrück as 164 Infanterie Lehr Division, around 382,433 and 440 Infanterie Regiments. It did not take part in the campaign in the West hut was used in the Balkans, being stationed on occupation duties in Greece for a year before being moved to Crete. In early July 1942 the division was moved to North Africa and redesignated 164 leichte Afrika Division. It arrived in the nick of time. 382 Infanterie Regiment arrived at the Panzerarmee Afrika HQ just as its defenders were about to be overrun.

The division's first major action was at the end of August when it took part in a raid against Australian forces at El Alamein. After the British offensive of October 1942 the division fought in the rearguard, divisional units being dispersed and attached to armoured formations as support troops.

The division had a spell out of the line for rest and refit until early December when it was tasked to prepare defensive positions at Buerat. At around this time the division became fully motorised. In March 1943 the British launched a major attack on the Mareth Line, New Zealand infantry overrunning some of the division's units, and 164 leichte was forced to withdraw. By April the last of the division's vehicles had been lost and 164 leichte was once again reduced to footslogging infantry. By the time it finally surrendered on 13 May it had been reduced to some 5,000 men.

This division was raised in the autumn of 1942, with its home base in Wehrkreis XIII, the Nuremberg area. Shortly after working up the division's first elements were sent to North Africa in December 1942. It was allocated to Panzer Armee-Oberkommando 5 and was assigned to cover the sector of the front between Division von Broich and 10 Panzer Division. Whilst the greater part of the division was held in reserve, Infanterie Regiment 754 was temporarily allocated to 10 Panzer Division and took part in the battles over the Christmas period of 1942. Infanterie Regiment 755 arrived in North Africa in early January 1943, and by the middle of the month the division was at full strength, taking part in Gen. von Arnim's drive towards Bou Arada. The division was involved in fierce and continuous combat until, by the start of March, the Korpsgruppe to which it was attached had only six tanks left. 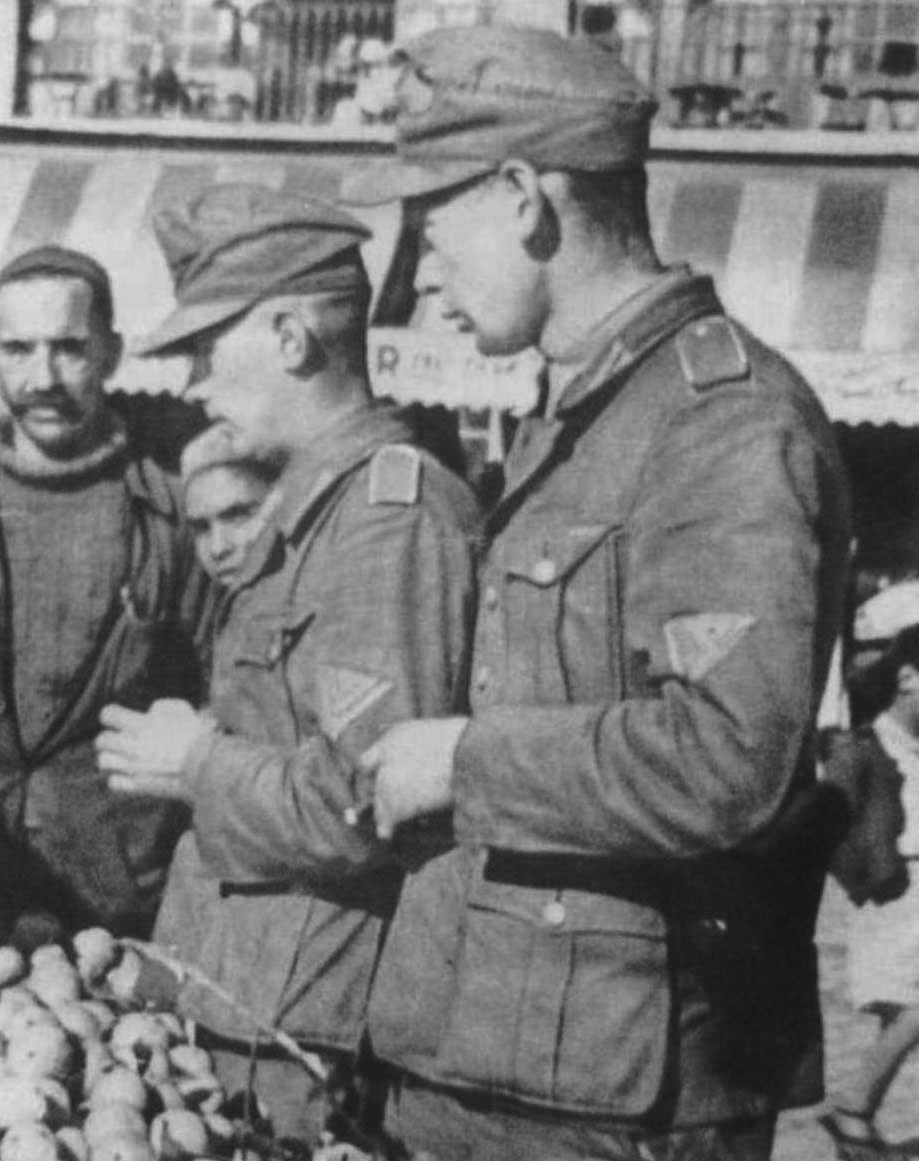 Haggling in a native bazaar, two junior NCOs; the original colour print shows the left hand man to wear infantry white piping on his shoulder straps, his mate armour pink piping. The left hand cap and tunic are of warmer brown shades of olive than the right hand uniform, which is distinctly greener. (Josef Charita)

In late April 334 Infanterie Division provided 'Gruppe Audorff', which was used in the attack on the heights of Medjez el Bab, being halted after some initial successes. The inevitable British counterattack was aimed at the German positions around Hill 296 (Longstop Hill). Infanterie Regiment 756 held the position against several British attacks over four days of intense combat but was eventually pushed back.

As the campaign in North Africa moved towards its conclusion in May 1943 the division was pulled out of the line and moved to an area north of Medjerda. Lack of fuel led to the inevitable loss of mobility, and the division became cut off and surrounded by enemy forces. After a futile attempt to break out the division finally surrendered to the British on 8 May between Mateur and Terbourba. The division was reformed in France in late summer 1943, serving for the remainder of the war on the Eastern Front.

Formed late in 1942 near Antwerp, this division was one of the German Army's penal units. The bulk of the personnel comprised both minor political offenders and criminals, such as black marketeers, for whom military service had been authorised as a form of rehabilitation. Originally of brigade strength, it was upgraded to a division in March 1943. Its officers and NCOs were hand-picked, reliable and experienced soldiers. In March 1943 two of its regiments, 961 and 962 Rifle Regiments, were moved to North Africa. The divisional commander, Generalmajor Kurt Thomas, was reported missing in action when his plane was shot down on his way to the North African front. Because of this there was to be no time for a formalised divisional HQ element to be formed during the short period the unit served in North Africa. (Thomas was reportedly promoted to Generalleutnant in October 1943 and killed in action on the Eastern Front, so apparently survived the shooting down of his plane.)

Shortly after its arrival in Africa, Schützen-Regiment (mot) 961 was attached to 'Kampfgruppe Fullreide' and took part in the defensive actions following the British offensive in the Fondouk area on 7/8 April. Schützen Regiment (mot) 962 took part in the defence of 'Longstop Hill' during the middle of April. For the next few weeks the division's elements in North Africa fought in numerous defensive actions, before surrendering on 13 May 1943. In view of its short period of service in North Africa, and the 'criminal' nature of many of its personnel, the division performed well. Those elements not sent to North Africa were posted to Greece.

In early November 1942 'Stab Lederer' was formed to control all German units in Tunisia. Changed a few days later to 'Stab Stolz', it was once again renamed on 18 November 'Division von Broich'. This formation included such diverse forces as a Fallschirmjäger Regiment and an Italian Bersaglieri Regiment as well as infantry and artillery troops. On 26 November the division took part in the first clash between German and US armour in World War Two.

In December 1942 Panzer Armee-Oberkommando 5 was formed and Division von Broich came under its control, being allocated to the northern sector of the Tunisian front. On 7 February 1943 Generalmajor der Panzertruppe Hasso von Manteuffel took command of the division when von Broich was posted to take command of 10 Panzer Division, whose commander had been killed in action. The division's title was altered to 'Division von Manteuffel' at this time.

This famous Panzer general commanded the division during the German offensive from 26 February to 15 March 1943, when it advanced almost to Djebel Aboud before heavy losses halted its progress. On 31 March command passed to Generalleutnant Bülowius; the division remained on the northern sector of the front during the final battles before surrendering on 9 May 1943.