By mid-January 1942 Rommel was sufficiently re-supplied to plan a new offensive before the now overextended British could catch their breath. On 21 January Italian forces drove hard to Benghazi, whilst the Germans pushed the British back 'across the bulge' to Mechili and thence on to a line south from Gazala. At this point both sides dug in, Rommel being disinclined to stretch his supply lines any further at this stage.

Once again a quiet few months ensued while both sides built up their strength. Rommel was the first to reach preparedness, though the build-up of British forces at Gazala forced him into action earlier than he would have wished. He intended to move on Tobruk, while the Italians took the entrenched position at Bir Hacheim to the south-west, at the desert tip of the allied line.

On 27/28 May 1942, Rommel's Panzers hooked round the left of the British lines and swept north-cast to join battle with the 8th Army, slowly gaining the upper hand in fierce combat. To the south, however, the Free French forces holding Bir Hacheim rebuffed all Italian attempts to capture the fortress. Rommels' supplies ran low, and a combination of minefields and RAF strafing attacks reduced German mobility to a dangerous degree. Both sides were almost exhausted. Had the British been aware of Rommel's precarious position and made an all-out effort at this point, they might have succeeded in destroying the German force. As it was, Rommel dispatched 90 leichte Division south, and with the Italian 'Ariete' Division and Luftwaffe support eventually forced the French to abandon Bir Hacheim on 11 June, thus securing his supply routes. 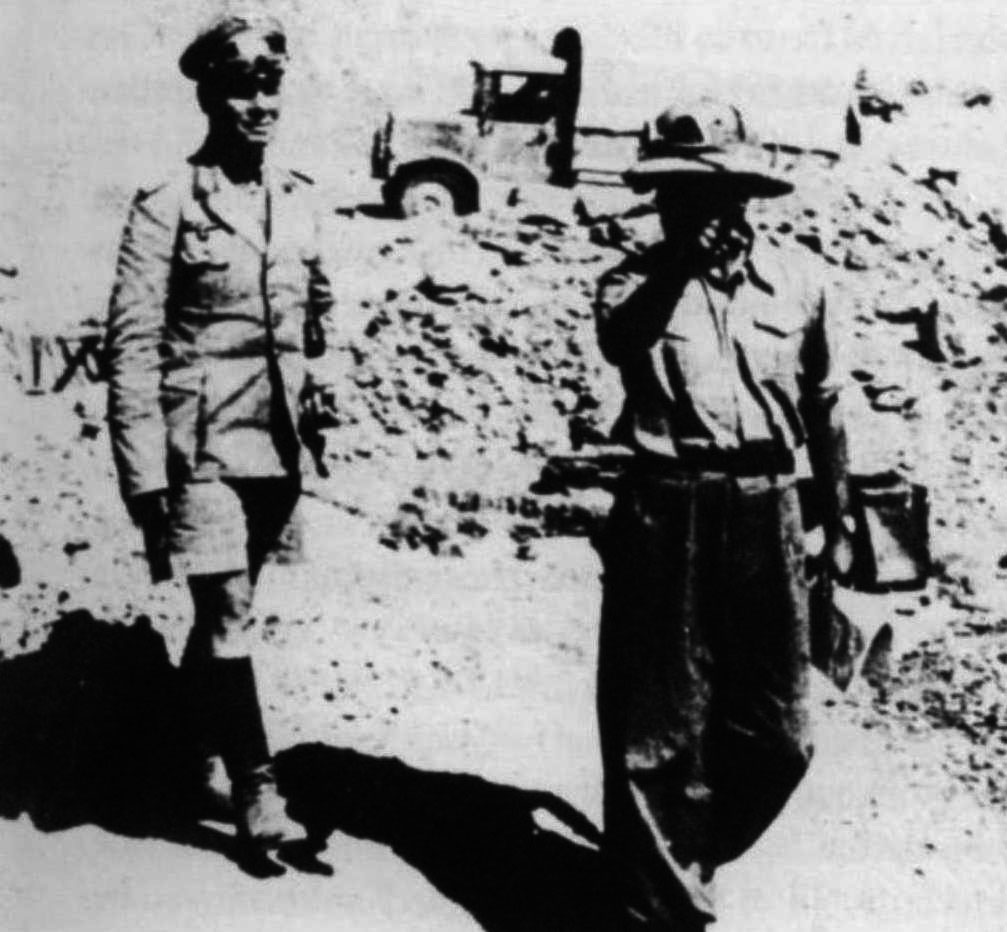 Rommel himself rarely wore shorts; this photo was taken in August 1942 near El Alamein. 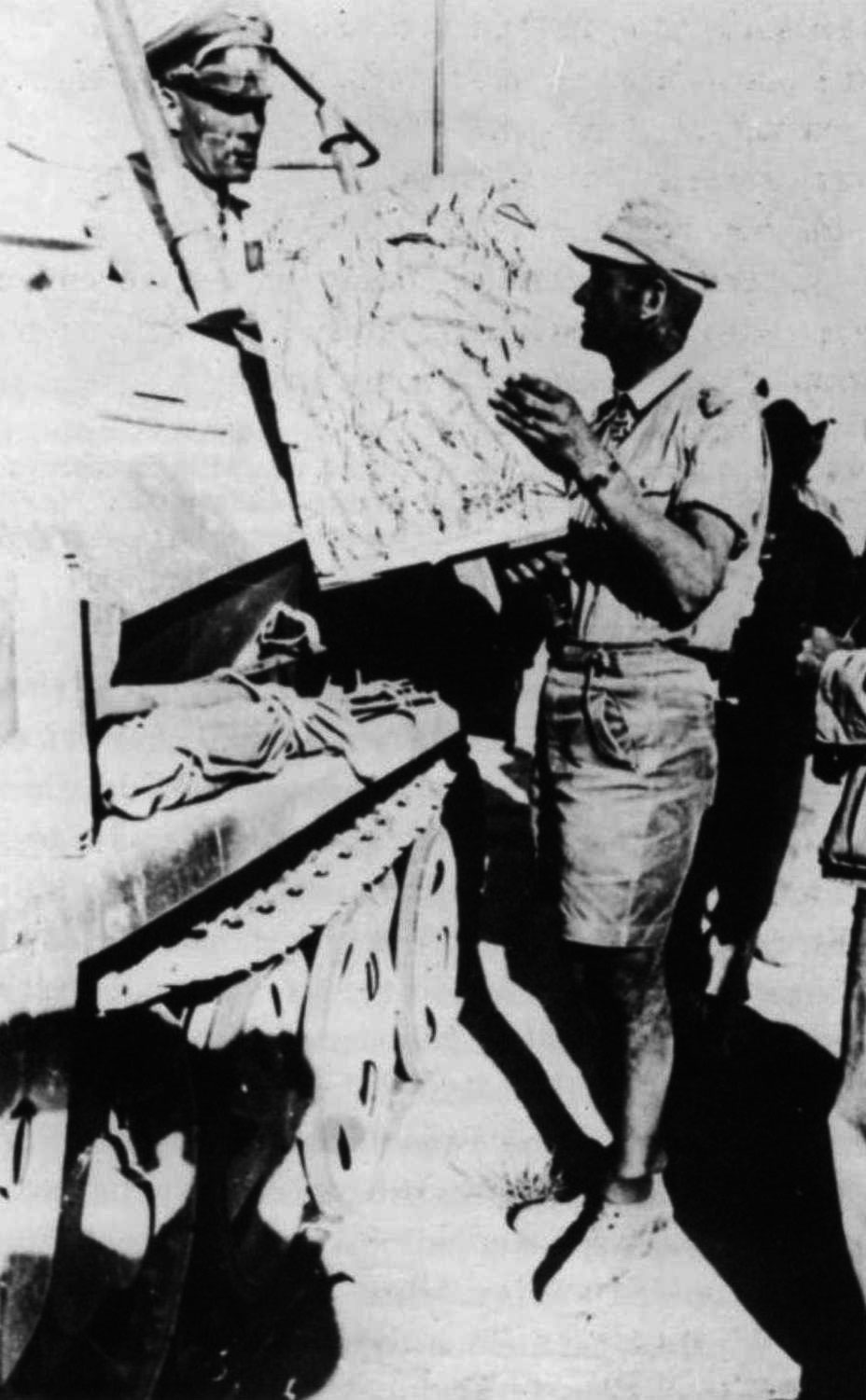 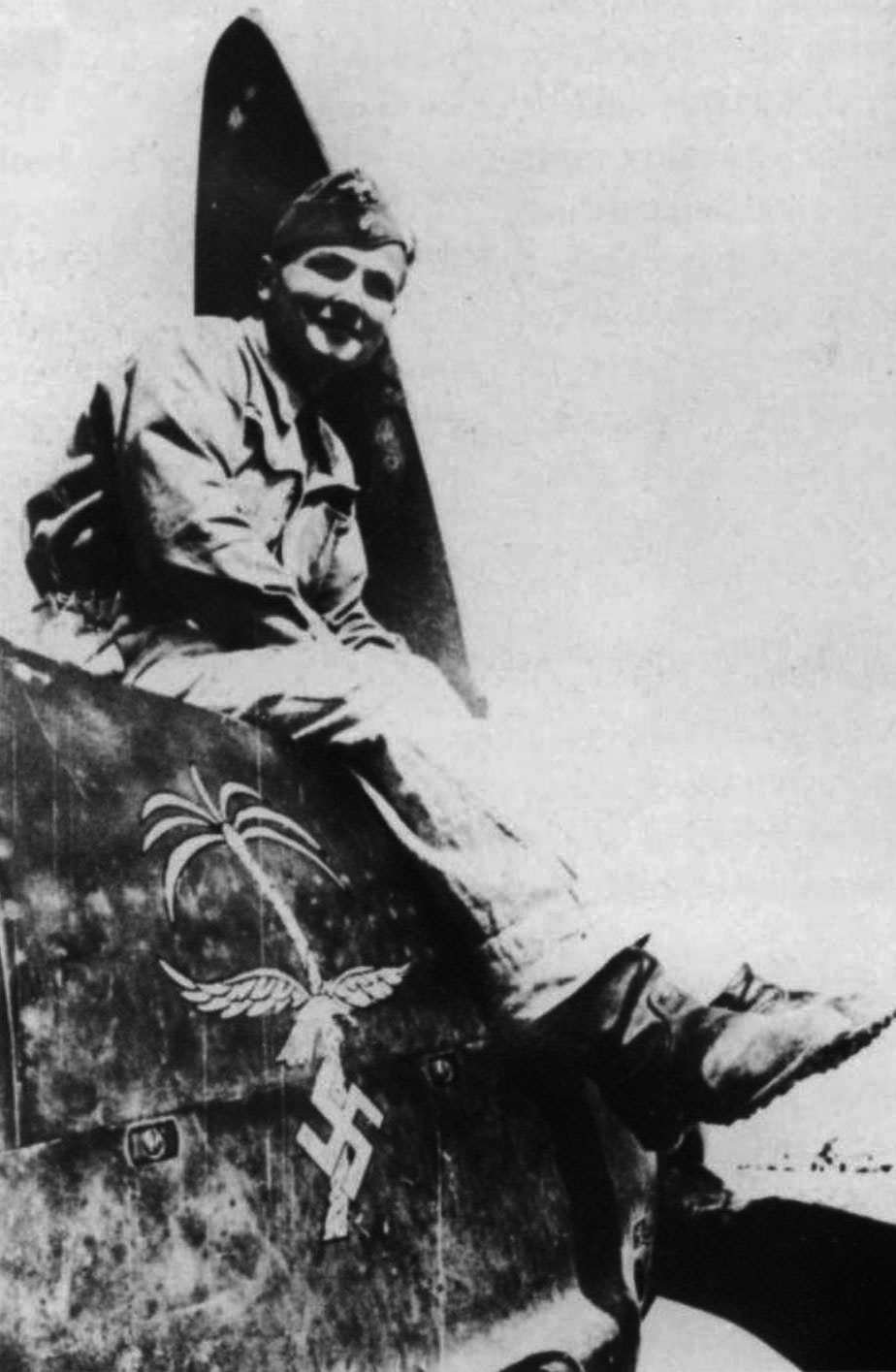 A smiling Luftwaffe mechanic, wearing the blue-grey Fliegermütze from the continental uniform, sits on the cowling of a Junkers Ju87B Stuka. Note the neatly painted Luftwaffe variation of the DAK's palm-and-swastika insignia. (Josef C'harita)

Now the stalemate was over and by mid-June Rommel could concentrate his forces for the attack on Tobruk. As the British withdrew in some disarray with part of 8th Army moving into the Tobruk garrison area and the remainder withdrawing south towards the frontier with Egypt. After only a few days' respite Rommel's men were thrown into the battle for Tobruk. The Germans were well acquainted with Tobruk's defences and attacked on 20 June from the south-east before the defenders could adequately prepare. On 21 June the garrison, mainly 2nd South African Division, surrendered, thus providing Rommel with a windfall of captured supplies. The British were shocked and demoralised by this unexpected reverse.

A delighted Hitler promoted Rommel to Generalfeldmarschall, the youngest in the German Army. Despite his original intent to halt at Tobruk until the British garrison at Malta was subdued, removing the danger of attacks on his supply convoys, Rommel successfully pressed Hitler for permission to pursue the retreating British into Egypt, and German troops crossed the frontier on 23 June.

Auchinleck moved his reserves into position at Mersah Matruh to block the pursuing Germans. The British could field around 20,000 men, far more than Rommel's mobile spearhead of 21 Panzer and 90 leichte Divisions; despite this, poor command of the British troops and atrocious confusion and lack of communications allowed the Germans to encircle the Mersah Matruh positions. Not realising the weak state of Rommel's forces, the New Zealand Division broke out of Mersah Matruh and retreated eastwards. Nothing now stood between Rommel and Alexandria but for the untested defensive position along a line south from El Alamein. This was, however, an excellent natural defensive position. With the sea to the north and the impassable Quattara Depression to the south, only a narrow strip of land remained to be defended.

On 30 June 1942 German mechanised units hit the first line of defensive minefields. This was to be the start of four months of intensive fighting. Within a few days of the first contact Rommel realised his troops were too exhausted to continue and pulled his forces back to rest and regroup. Italian forces coming up to the line took over the forward positions. The British had no intention of allowing Rommel this respite, however, and throughout July mounted numerous attacks on the German positions. By the end of that month little advantage had been gained by either side and both were exhausted.

Rommel, gambling on the arrival of an expected supply convoy, determined on a further attempt to break through the British positions. An attack was launched on 30 August in which Rommel intended to punch through the southern end of the British line and swing up behind their positions. This plan was known to Auchinleck's newly appointed successor as C-in-C Middle East, Gen. Alexander, thanks to 'Ultra' intercepts. The new commander of 8th Army, Gen. Bernard Montgomery, laid a trap for his adversary. Powerful artillery and dug-in tank forces waited along the Alam Haifa ridge; and when the attacking Germans began to run into the well-prepared British minefields and were forced further south nearer the ridge, the trap was sprung. Battered by artillery and tank fire and by attacking RAF fighter-bombers the Germans suffered heavy losses. Rommel, by now suffering from ill-health, faltered and withdrew his forces, still with their morale high and somewhat surprised by their commander's decision. Rommel left for Germany on sick leave on 23 September, leaving orders that while he was gone widespread defensive minefields be constructed, covered by the superb 88 mm Flak guns. Montgomery resisted political pressure to attack at once, while building up his strength with reinforcements and supplies.

On 23 October, while Rommel was still in Germany, Montgomery launched his anticipated offensive with a ferocious barrage along the entire front line. As the 8th Army advanced into the well-prepared German northern defences progress was slow but determined. When Rommel returned on 25 October he found his men to be in good spirits and holding the line. Knowing Rommel's lack of fuel and weakness in reserves, Montgomery determined to draw him into a battle of attrition and wear his forces down by sheer weight of numbers. After five days of combat the British had still not broken through the German lines and had lost over 10,000 casualties; Montgomery knew, however, that Rommel's strength was now desperately low. On 1 November Montgomery suddenly shifted his attack to the southern sector; and on 4 November Rommel's forces finally accepted the inevitable and began to withdraw.

Only three days later British and American forces landed in Morocco and Algeria in Operation 'Torch'. Rommel's forces were now trapped between two fronts. Only one solution remained for Rommel: to withdraw into Tunisia and attempt a withdrawal to Sicily. Montgomery was reluctant to engage in any risky pincer movements to cut off the retreating Germans, who, though battered, still had considerable fight left in them. Rommel kept out of reach of the pursuit during a skilful withdrawal, reaching the Mareth Line fortifications in February 1943. Meanwhile, on the western Tunisian front, Gens. Nehring and Von Arnim conducted a skilful and aggressive defence in mountainous terrain against the US- British armies advancing from Algeria. 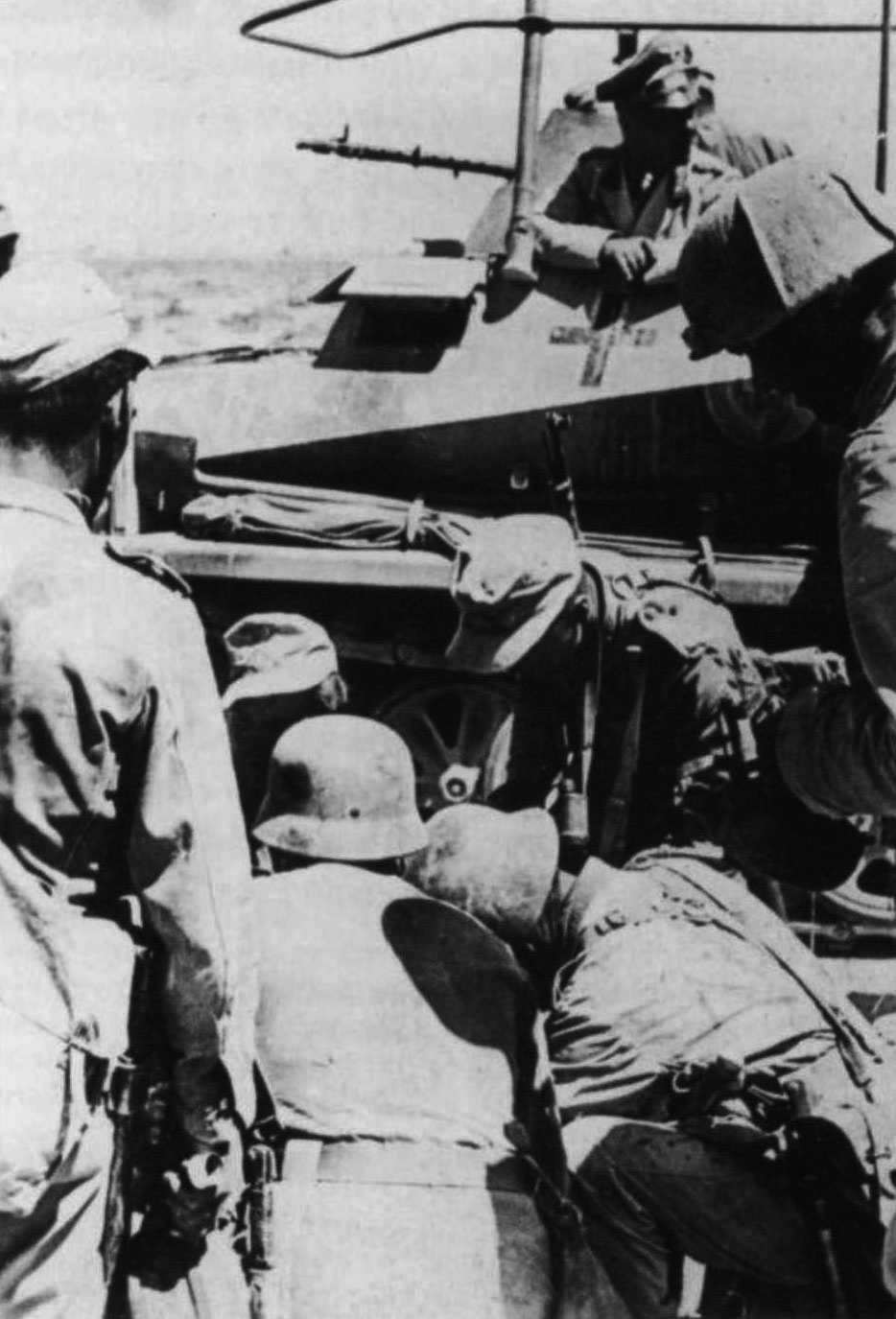 Late June 1942, near Tobruk: Rommel in his favourite SdKfz 250/3 command halftrack 'Greif'. The grenadier at right has a crude helmet cover made from sandbag hessian; the others have helmets painted sand- colour with a matt finish. (Josef Charita)

Although Rommel had by now given up any hope of victory in North Africa, circumstances had now in fact begun to favour the Germans. Now it was Montgomery whose supply lines were dangerously stretched. The Germans had now re-established, if only temporarily, air superiority over the Tunisian bridgehead, and reinforcements were being landed. By the end of December 1942 Axis forces in Tunisia had reached a total of some 100,000 men, and reinforcements had included a heavy tank battalion equipped with the formidable new Tiger.

On 14 February Rommel launched an attack to the west on advancing American units. Both 10 and 21 Panzer Divisions smashed into the Americans at Sidi Bou Zid, inflicting grievous losses. A counterattack on the following day was quickly rebuffed. On 20 November Rommel, with 10 and 15 Panzer Divisions, captured the Kasserine Pass, easily routing the inexperienced US troops opposing him. Within a couple of days, however, Rommel's advance had stalled through lack of resources and continued stiffening of the Allied defence.

Rommel now turned his attention to the British; a plan was drawn up for an attack at Medenine on the Mareth Line. Unfortunately for Rommel, enemy intelligence had once again given them the exact time and place of the German attack. Well-sited British anti-tank guns took a dreadful toll of the Panzers and infantry losses were equally heavy. On 9 March 1943 Rommel was recalled to Germany and was never to return to Africa. His replacement as C-in-C Panzer-armee Afrika was Gen. von Arnim.

All that was now left to him was to fight a delaying action to hold off the inevitable surrender as long as possible. On 12 March 1943 Von Arnim finally capitulated; the desert war was at an end, and 240,000 Axis troops marched into captivity - but also into history. Few defeated forces have gained such ungrudging respect from their enemies as did the men of Rommel's desert army. 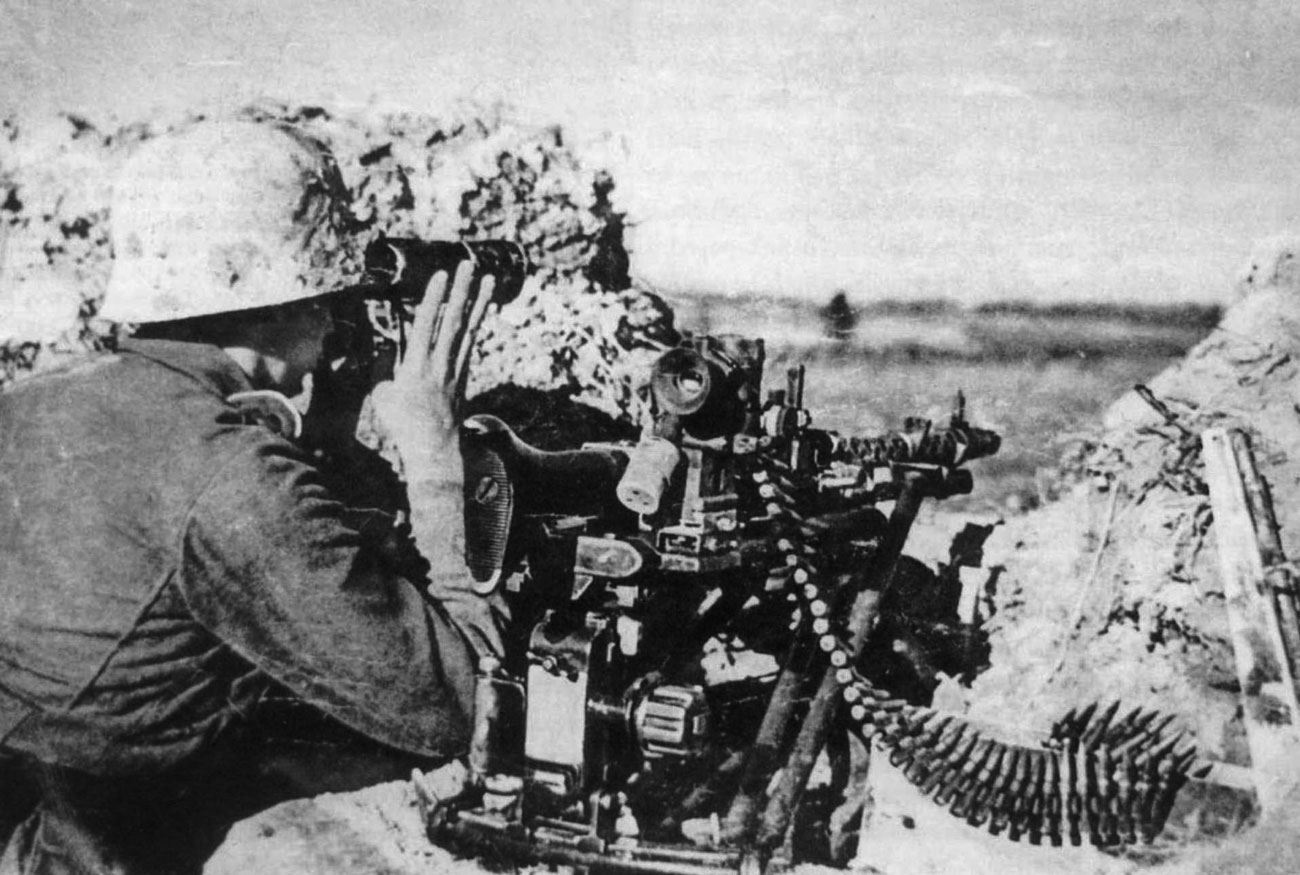 MG 34 gunner on watch in it defensive position; his helmet is effectively camouflaged with thick daubs of dried mud. (Josef Charita)

Initially known as 'Aufklärungsstab Rommel' when Rommel was informed of his new position on 6 February 1941, the German army in North Africa was renamed 'Deutsches Afrikakorps' when Hitler announced its official formation on 19 February, the original Aufklärungsstab being absorbed into the new command. At this initial stage the Afrikakorps consisted of the following elements: 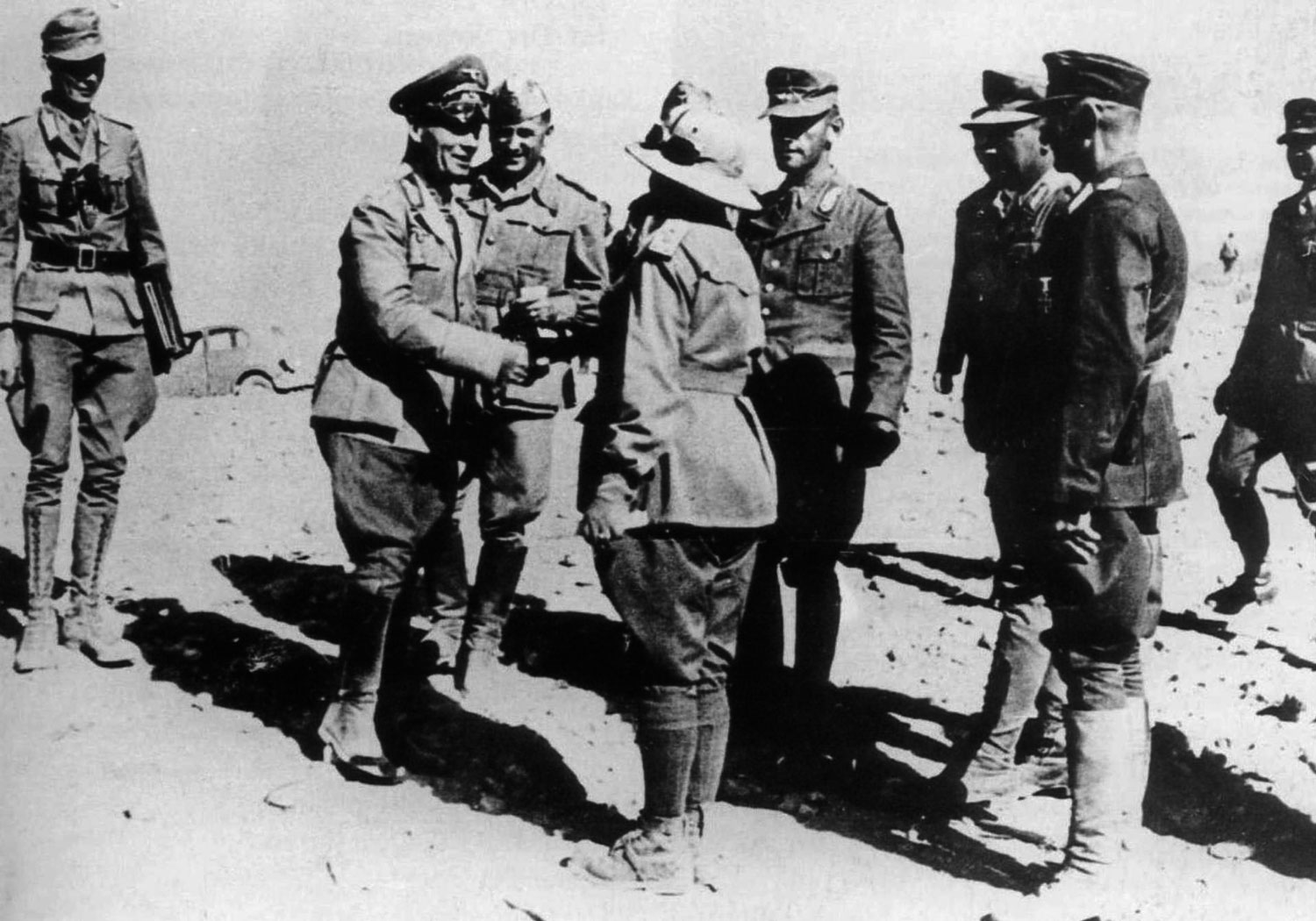 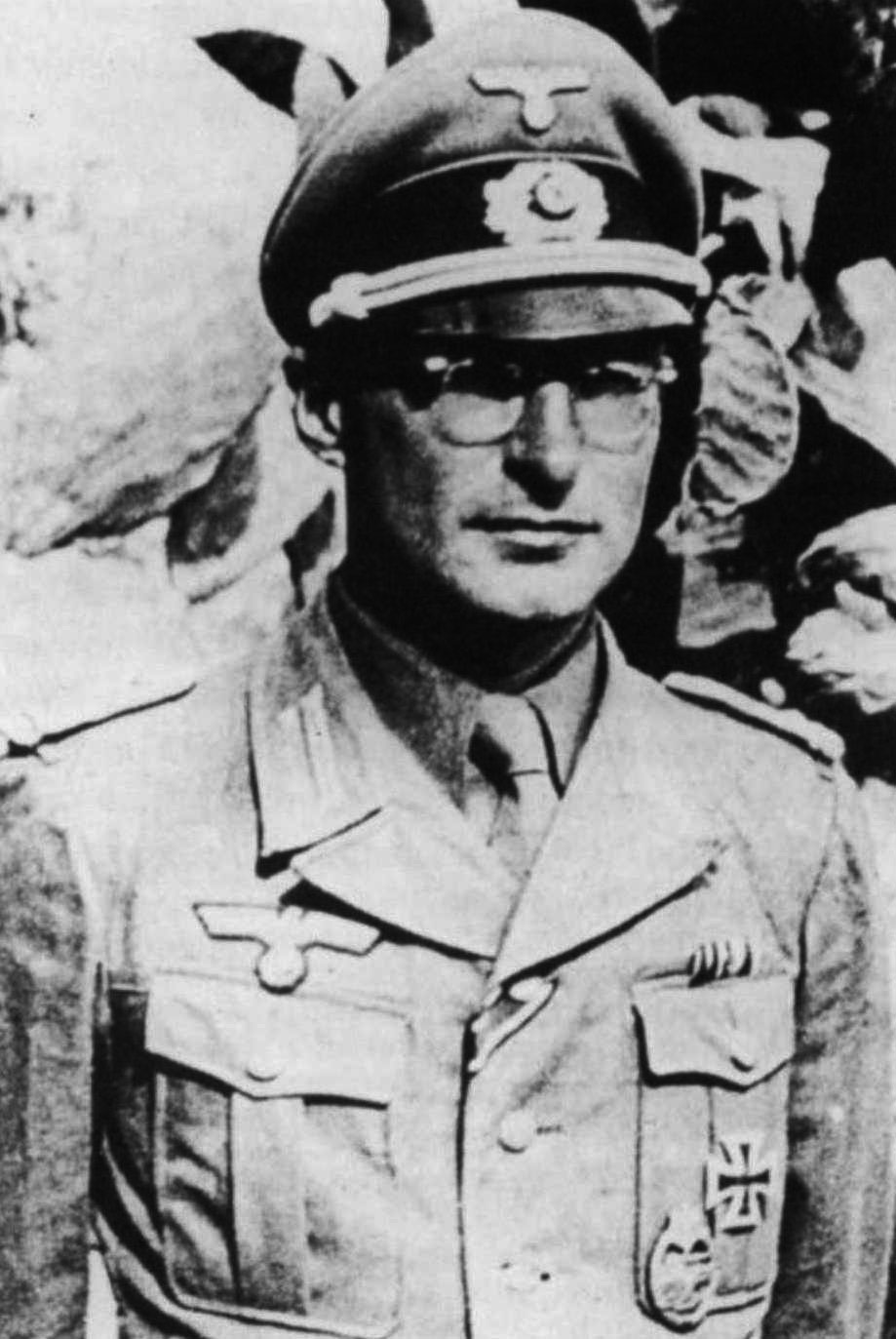 Use of the held prey continental Schirmmütze in the desert was far from unknown. This is Oberleutnant Dr. Heinz Lotze, who would survive to win the Knight's Cross as a Hauptmann commanding I Kompanie, Panzer-Regt. Kahle on 8 May 1945. He has added the hand-embroidered silver breast eagle from continental uniform to his tropical blouse, hut retains the 'all ranks' tropical collar patches.

Within six months of its formation the Afrikakorps was raised to the status of a Panzergruppe. As well as the original components, the new Panzergruppe Afrika included 90 leichte Division, and had six Italian divisions placed under its command: the 'Ariete', 'Trieste', 'Pavia', 'Bologna', 'Brescia' and 'Sovana' Divisions.

At the end of January 1942 the Panzergruppe was renamed Panzerarmee Afrika; and in February 1943, two years after its formation, was retitled 1. italienische Armee by an obviously political decision.

In August 1942, at its high point of success, the Axis army in North Africa consisted of the following elements: