The Defeat of Nazi Germany

Germany's long retreat began in 1943; the Battle of Kursk in July of that year was the death knell for hopes of victory in the east. Two months before, Italy had been knocked out of the war, and it was only a matter of time before the Allies would try to break into Fortress Europe. The German threat to the Atlantic supply routes was effectively nullified, and before the year was out, US and British bombers were attacking both industrial targets and population centers within the Reich.

By the middle of 1944, after successful massive Allied landings in Normandy and breakthroughs aimed at the Rhine, the combined might of US and Soviet industry and armies had become overwhelming. British resources were strained, but not to the breaking point. In fact, Allied organization and equipment were at their peak. The Germans, by contrast, were drained in every area: men, money, armaments and leadership. By the time Allied forces converged on the Elbe to link up with the Russians (April- May 1945), most German units were prepared to show the white flag. Town after town surrendered eagerly to the Allies in preference to the feared Russians.

The contraction and (below) final defeat of Hitler's Germany. 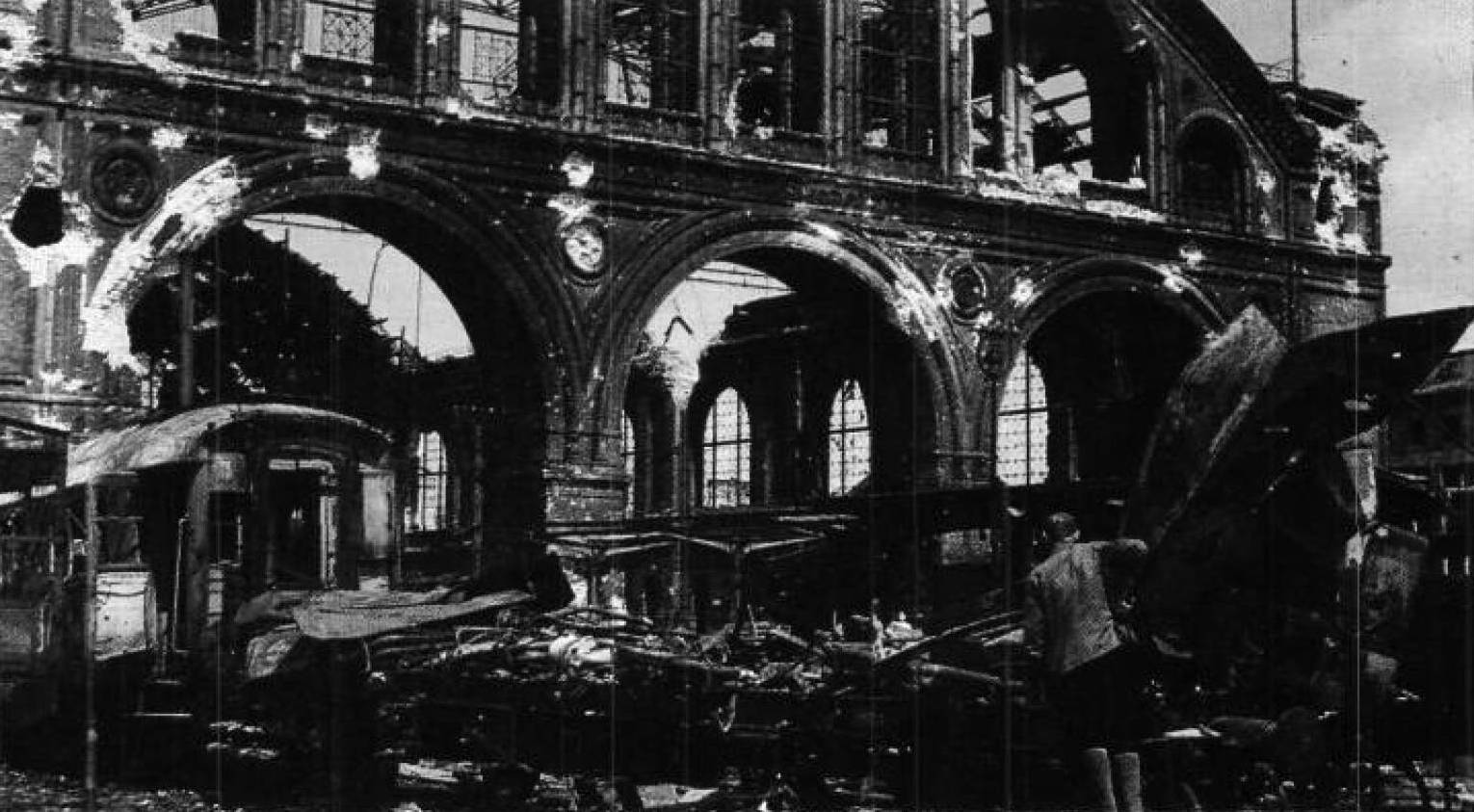 Berlin lies in ruins, the target of round-the-clock raids by British and US bomber aircraft. 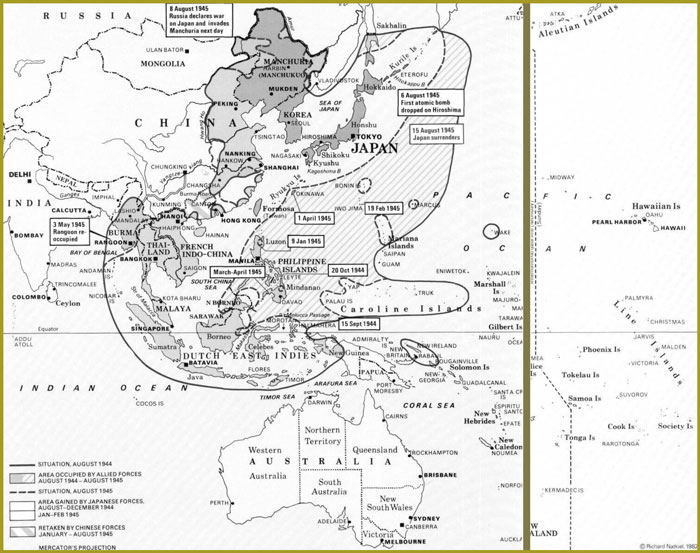 The reversal of Japanese supremacy in the Pacific was confirmed by the Allies' recapture of the Philippines in early 1945. De feat was then only a matter of months away. 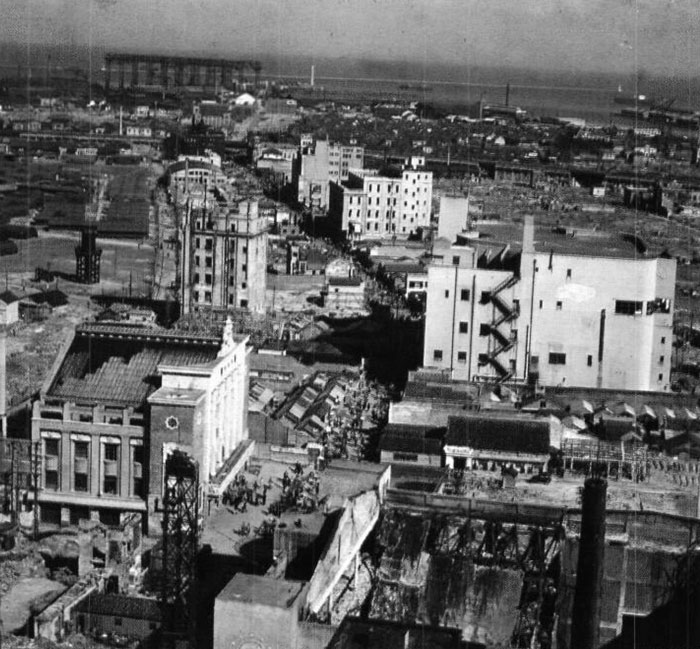 A postwar view of the business district of Kobe, showing the damage caused by incendiary attack.

Dissolution of the Japanese Empire

The first real check to the Japanese came with the Battle of the Coral Sea, six months after Pearl Harbor. There US carriers commanded by Rear Admiral Frank 'Black-Jack' Fletcher dashed Japanese hopes of capturing Port Moresby, the key to New Guinea. The battle made history as the first naval engagement in which opposing ships never sighted each other - all fighting was done by carrier-based planes. Both sides made serious errors in this new form of warfare, but many of these were corrected by US forces in the subsequent Battle of Midway.

In this action, the island of Midway served as an 'unsinkable aircraft carrier' for Admiral Chester W Nimitz. Bungled Japanese intelligence contributed to a disaster from which the Japanese Navy would not recover - the loss of every carrier commanded by Admiral Chuichi Nagumo. After Midway, the Japanese would be incapable of supporting the far flung conquests so rapidly made in preceding months.

To preclude a second Japanese attempt on Port Moresby, the Americans determined to seize Tulagi and Guadalcanal in the Solomon Islands. It was a six-month struggle in which US forces gained additional skills from day to day despite heavy losses, and it set the tone for the duration of the Pacific War - a campaign that moved steadily toward Japan by avoiding heavily garrisoned enemy strongholds and seizing weaker positions to use as a springboard to the next American objective.

General Matsuichi Ino summarized after the war: 'The Americans attacked and seized, with minimum losses, a relatively weak area, constructed airfields, and then proceeded to cut supply lines ... Our strongpoints were gradually starved out.' It was a brilliant improvisation on the theme of the indirect approach. 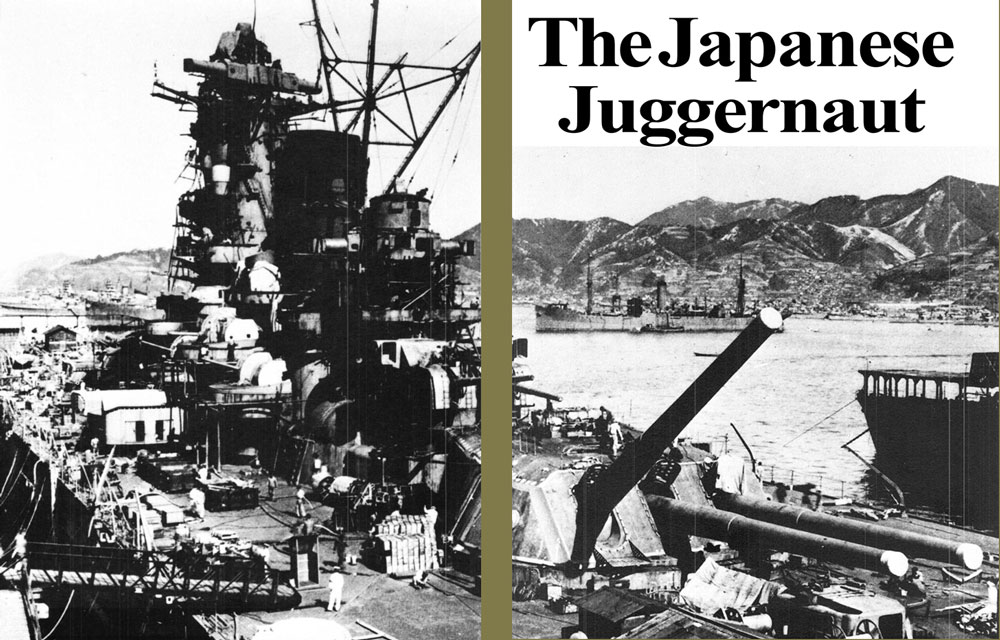 The battleship Yamato fitting out at Kure, Japan, in 1941. 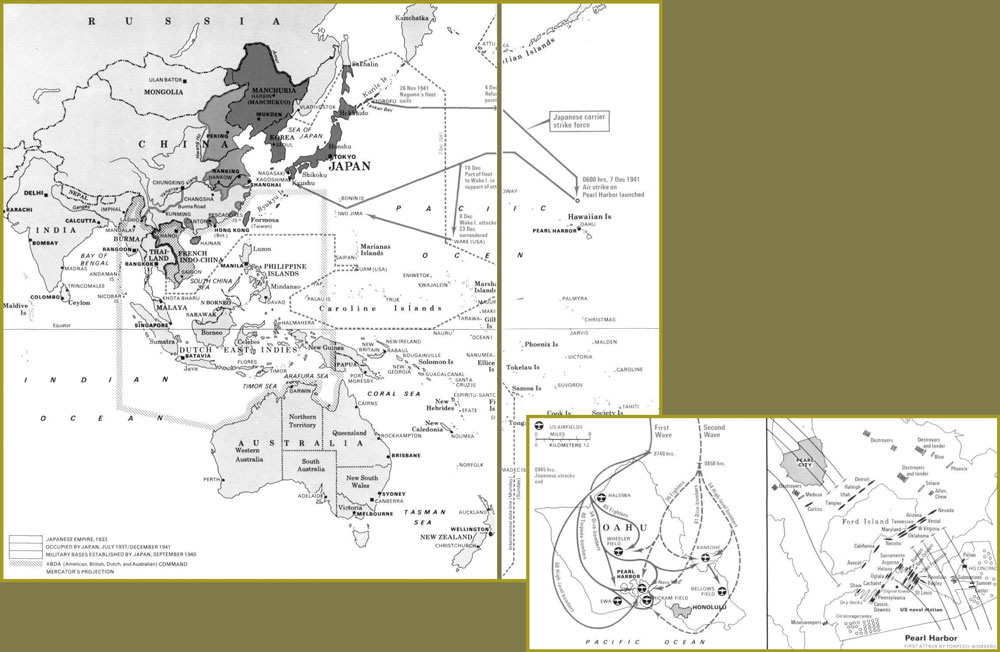 The Pearl Harbor attacks in detail 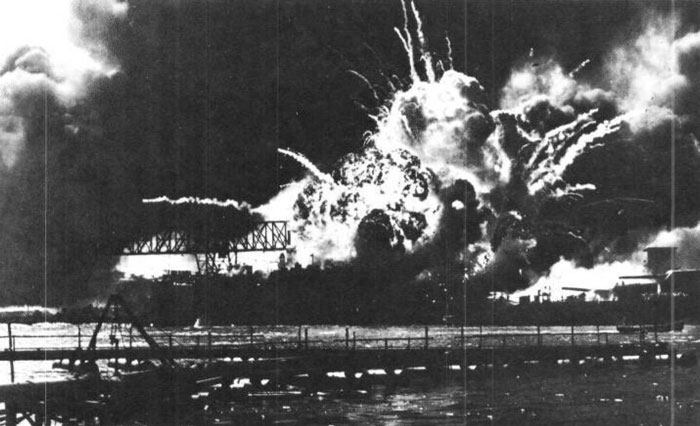 The magazine of the US destroyer Shaw explodes during the raids.

The Japanese strike force that approached Pearl Harbor on 6 December consisted of six fleet carriers escorted by two battleships and two heavy cruisers. Anchored in Pearl Harbor were eight battleships of the US Pacific Fleet, numerous destroyers and tenders, and submarines and minesweepers. The carriers Lexington and Saratoga were away on a supply mission to Wake Island, which was fortunate for the future course of the war on the Allied side.

Radio monitoring of increased Japanese radio traffic in the several days preceding the attack made it clear that an operation was underway. All Pacific forces had been alerted, but those at Pearl Harbor remained on a peacetime footing despite the danger. Aircraft on the several Oahu airfields were undispersed, and ships were anchored in line with many members of their crews ashore. Reconnaissance flights had not been increased above the average.

The Japanese launched the first wave of their two-part air attack at 6:00 AM on 7 December. A radar station reported incoming planes at 7:00 AM, but this report was unaccountably ignored. An hour later, torpedo bombers came in to attack the harbor as fighters began to strafe the airfields. Virtually all the US aircraft were destroyed on the ground. In the harbor, five of the eight battleships were hit immediately; minutes later, West Virginia was in flames and sinking, Oklahoma had capsized and California was badly damaged. Arizona had exploded and Nevada had to beach herself as she made for the harbor entrance under fire from the second wave of the Japanese attack. Dive bombers and high-level bombers had joined the first aircraft contingent to create additional devastation.

By the time the second wave struck, US forces had rallied from the initial shock to offer a more effective defense. At 9:45 AM, Vice-Admiral Nagumo's aircraft returned to their carriers with loss of nine fighters, fifteen dive bombers and five torpedo bombers.

Had Admiral Nagumo launched an additional attack against the harbor, he might have destroyed the port facilities entirely and accounted for the absent aircraft carriers as well. Instead, he chose to withdraw the strike force, from which he dispatched several units to attack Wake Island (8 December). US Marines garrisoned there sank two Japanese destroyers and held the island against steady air and sea bombardment for two weeks, until they were overwhelmed by a Japanese landing.

Lieutenant General Tomoyuki Yamashita commanded the Japanese Twenty-fifth Army in its whirlwind invasion of Malaya. (December 1941). In this campaign, which drove all the way to Singapore and was described by Winston Churchill as the worst disaster in British military history, Yamashita earned the nickname 'Tiger of Malaya.' His force consisted of three divisions supported by 600 aircraft, as against Lieutenant General A E Percival's two divisions with some 150 aircraft.

Northern landings met little opposition except at Kota Bharu, where Takumi Force, a regimental group, had to fight its way ashore. Meanwhile, air attacks wiped out all but some 50 British planes.

A double advance south was led by the Japanese 5 Division, which grappled with 11 Indian Division around Jitra on 11 December. The defenders were pushed back steadily, as the Japanese Guards Division moved down the coast and 5 and 18 Divisions progressed inland. Within 70 days, Yamashita's troops had overrun all of Malaya through a combination of superior force, speed and surprise. General Percival was tricked by skillful jungle-warfare tactics into believing that the Japanese force was vastly superior in size, and on 15 February 1942 he and his men surrendered. 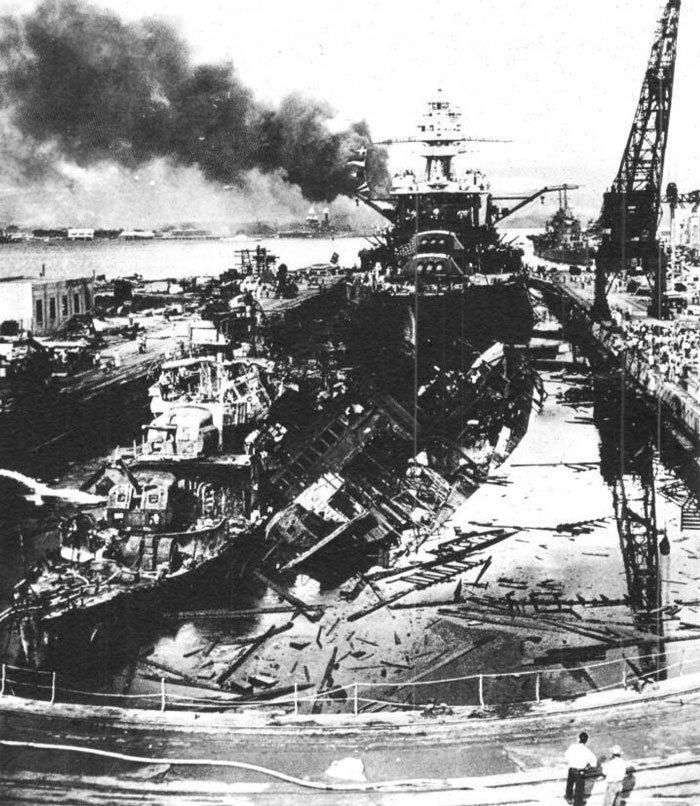 Aftermath of P earl Harbor, with USS Downes at left, USS Cassin at right and USS Pennsylvania at rear. 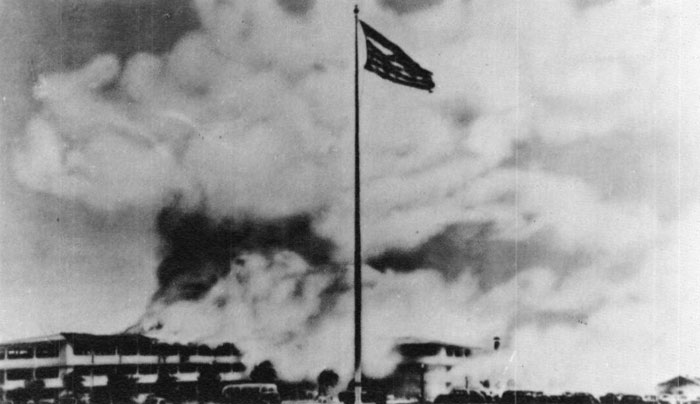 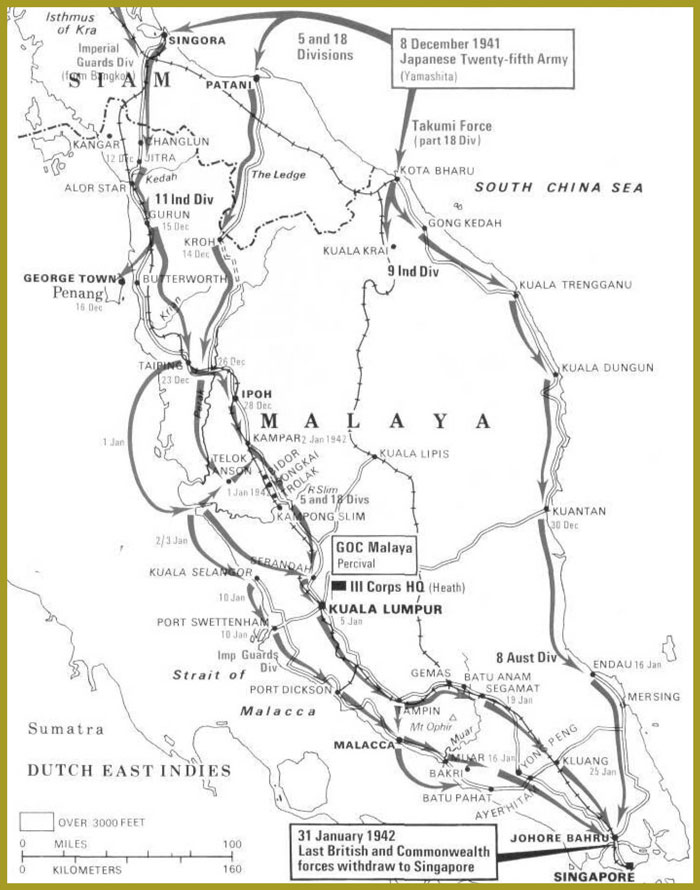 The Japanese conquest of Malaya, completed in January 1942. 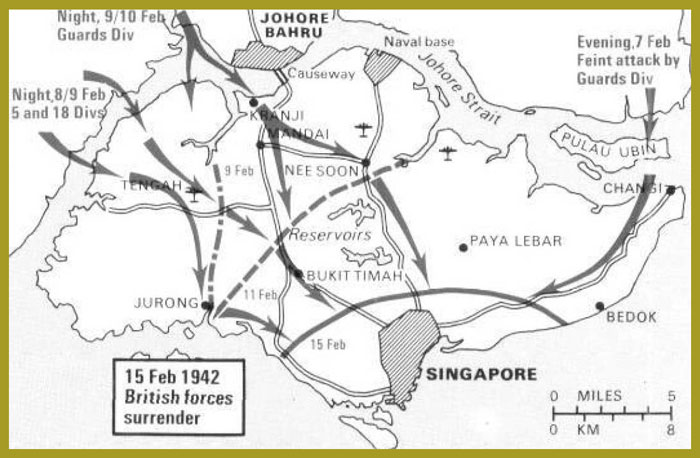 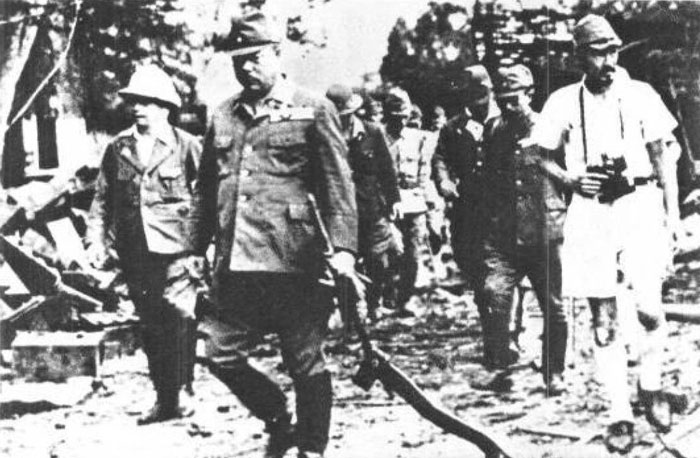 The Fall of Hong Kong

Simultaneous with the Japanese invasion of the Malay Peninsula on 8 December 1941 came the invasion of Hong Kong, whose defenders were hopelessly outnumbered. Within 24 hours they had been pushed back to the Gindrinkers Line, which was breached by the capture of Shing Mun Redoubt. The mainland then had to be evacuated, an operation which was completed on 13 December. Five days later the Japanese crossed Kowloon Bay on a wide front and captured more than half of Hong Kong Island. Fierce resistance continued until several days before Christmas, but after most of the reservoirs were captured, the garrison was forced to surrender on 25 December. 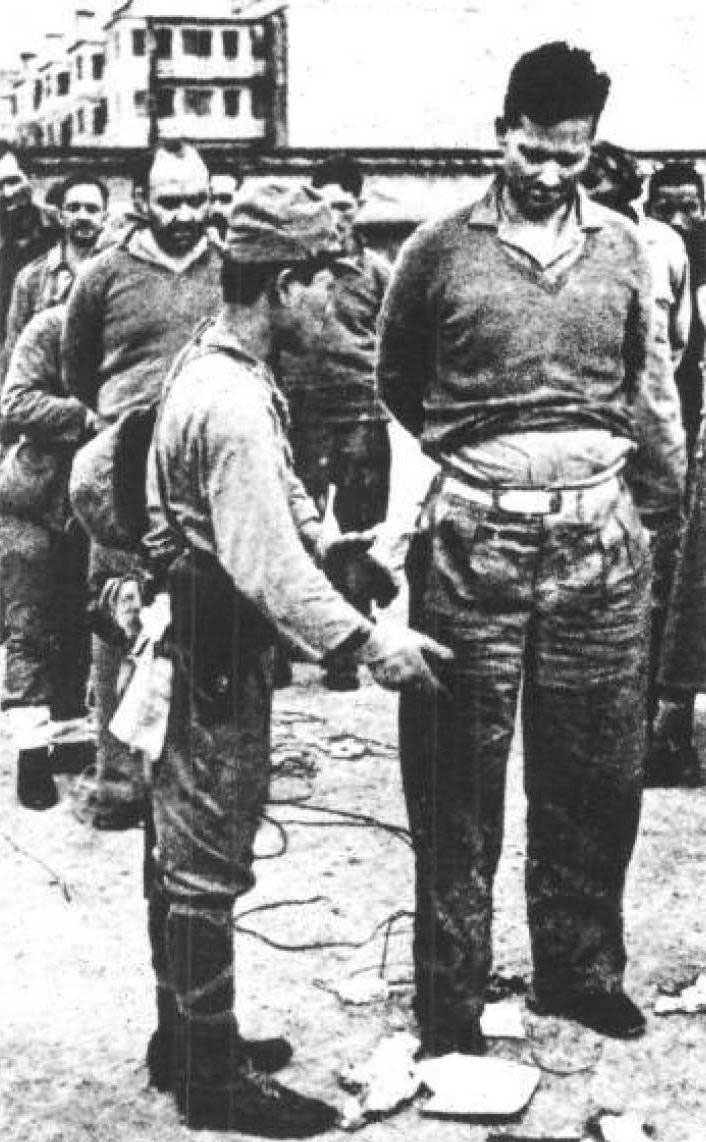 British soldiers face captivity after the fall of Hong Kong. 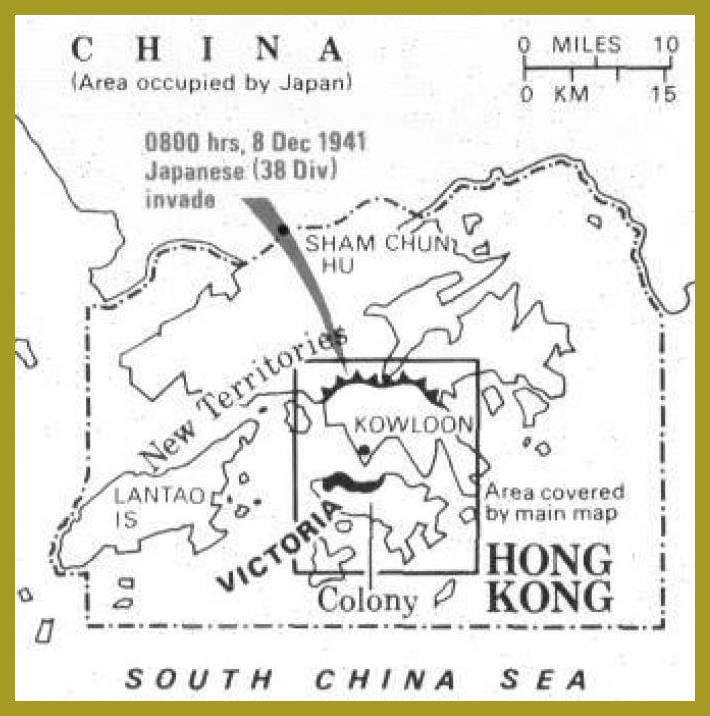 Hong Kong and the surrounding area. 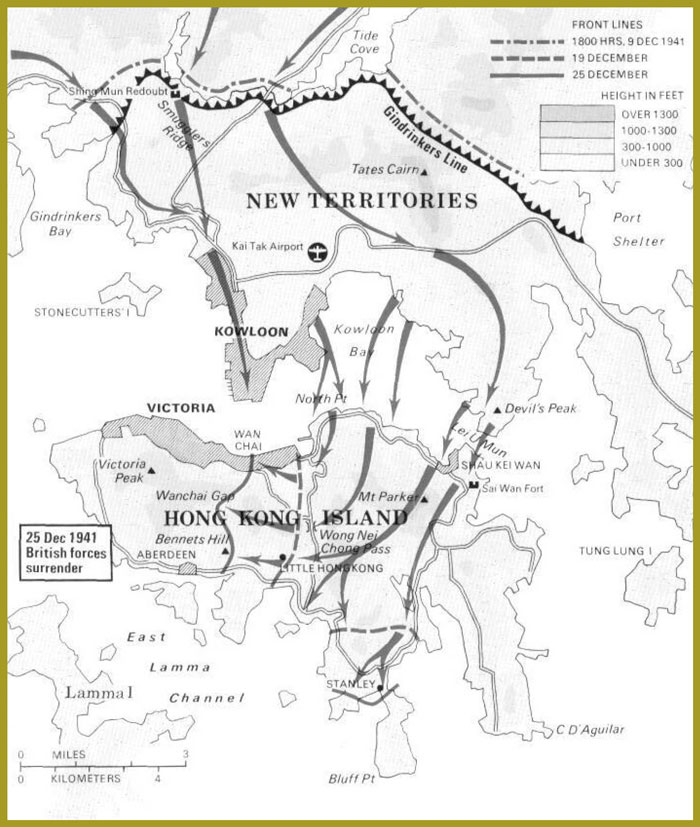 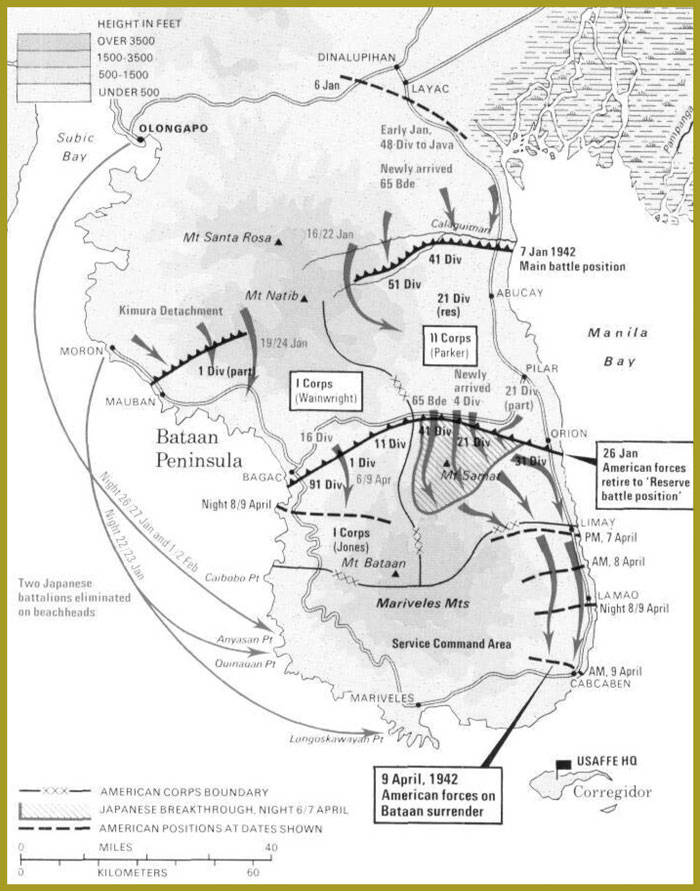 The Japanese conquest of Bataan, completed in April 1942.

The last US forces to hold out on Corregidor Island, south of Bataan, were finally neutralized on the morning of 6 May.

Victory in the Philippines

In July 1941, when the Philippine Army joined forces with the United States, General Douglas MacArthur was made commander of US Forces in the Far East (USAFFE). His ten divisions included some 19,000 American troops and 160,000 Filipinos - most of them ill equipped and undertrained. There were also 200 aircraft at his disposal. The Japanese believed, with some justification, that their Fourteenth Army of two divisions supported by 500 aircraft could conquer the Philippine Islands.

Heavy air attacks struck US air bases on 8 December (the same day as Pearl Harbor, but dated a day later by the International Date Line). Word of the Pearl Harbor disaster had impelled USAFFE to fly its bombers off Clark Field in the morning, but by the time of the midday attack, they were back on the ground with their fighter escorts. Forty-eight hours of bombing against the airfields accounted for the vast majority of US war planes and cleared the way for Japanese landings north of Luzon to seize the bases at Vigan, Laoag and Tuguegarao. In the south, Legaspi was seized as a base from which to interdict seaborne US reinforcements.

The main Japanese landings were at Lingayen Bay on 22 December, whence the invaders broke out of their beachhead to advance against Manila. On 23 December MacArthur announced his plan to withdraw to Bataan; five days later, he declared Manila an open city. By early January, the Japanese were gaining ground on the Bataan Peninsula, but their troops were overtaken by disease there and gained little ground for the next two months.