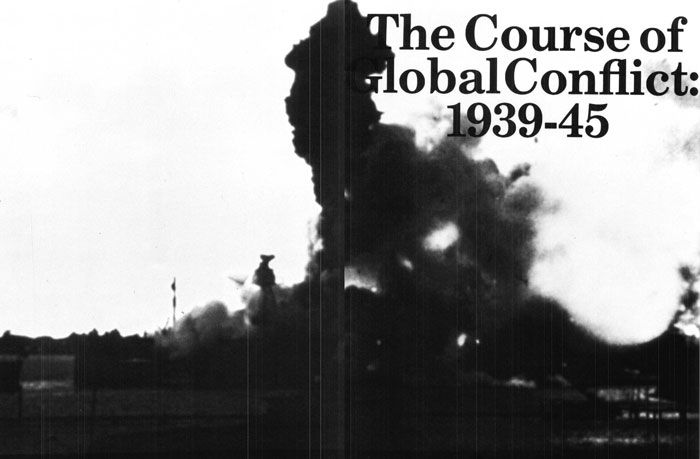 The Treaty of Versailles: Blueprint for Hostilities

Germany had had no part in the negotiations that resulted in the Treaty of Versailles; it was entirely the work of the 32 nations that had been leagued against her in World War I. The 80,000-word draft of the proposed peace treaty was approved by the Allied Peace Congress on 6 May 1919, and German representatives did not even see the document until the following day. They protested bitterly against its terms, and there were demonstrations all over Germany and a change of government before it was signed.

By the treaty's terms, Germany ceded Alsace-Lorraine to France, the towns of Eupeh and Malmédy to Belgium, the city of Memel to Lithuania, and the province of Posen and a 'corridor' through West Prussia to Poland. German Austria, Poland and Czechoslovakia were declared independent. The port city of Danzig was internationalized as a 'free city,' and the valuable coal region of the Saar passed under League of Nations administration and the economic control of France.

In addition, Germany lost all of its overseas empire, most of its armed forces and control of the Rhineland - which was to be occupied at Germany's expense until the Treaty of Versailles was fully executed. A clause that even some of the victors disputed forced Germany to claim full responsibility for the war and to promise financial reparation Tor all damage done to the civilian population of the Allies and their property.' The initial payment was set at five billion dollars; subsequent reparations were limited only by 'the utmost of [Germany's] ability' to pay. Disarmed, dishonored and heavily mortgaged, the conquered nation embarked upon years of distress and resentment that would culminate in the conflict that was to eclipse even the Great War itself. 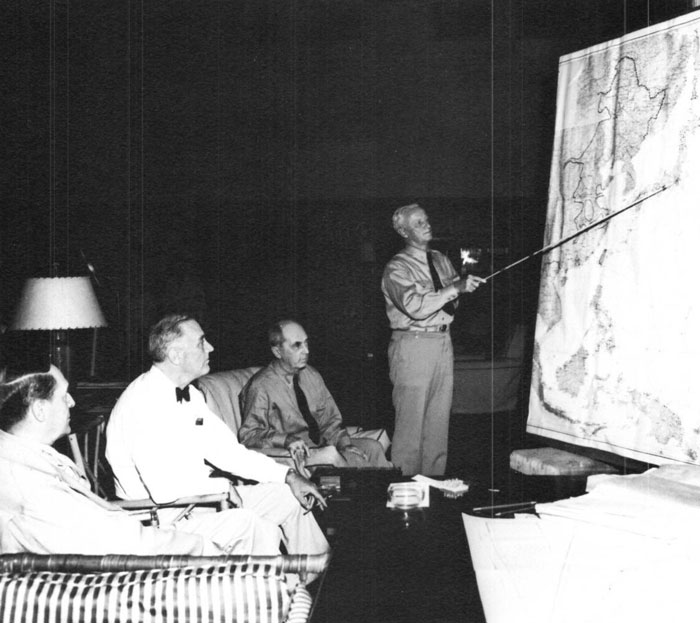 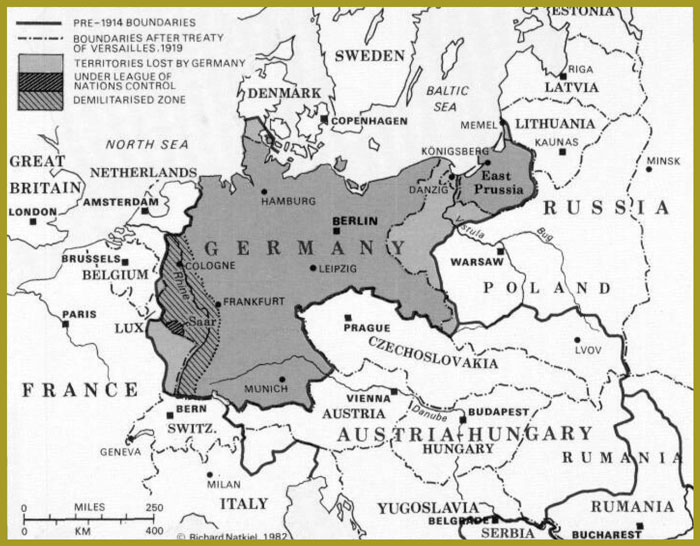 European boundaries before and after Versailles.

The Allied premiers convene in Paris for the Peace Conference in 1919.

The German Army that went to war in 1939 was armed and organized much like that of 1918, but there had been important developments in the interwar years. The Stuka dive bomber now served as a form of mobile artillery at need. Submachine guns offered an advantage in portability over the Vickers and Bren machine guns used by the British. Allied forces had more tanks, but the Germans were much better at using them tactically. German generals knew how to fight the war of movement, while the French were still fixated on their Maginot Line - a static and incomplete system that anticipated a second Verdun. The Germans had no intention of fighting another such action.

The new blitzkrieg style of German warfare rolled over Poland, Norway, Denmark and France in a matter of months. The British Army was shattered by the French campaign, but the evacuation from Dunkirk and the crucial weeks bought by the Battle of Britain staved off invasion of the British Isles. Mussolini took advantage of Allied defeats to enter the war on the German side, but Italian armies in both Greece and North Africa were struggling before the end of 1940. By that time, German U-boats were taking a heavy toll of Allied shipping on the convoy routes. 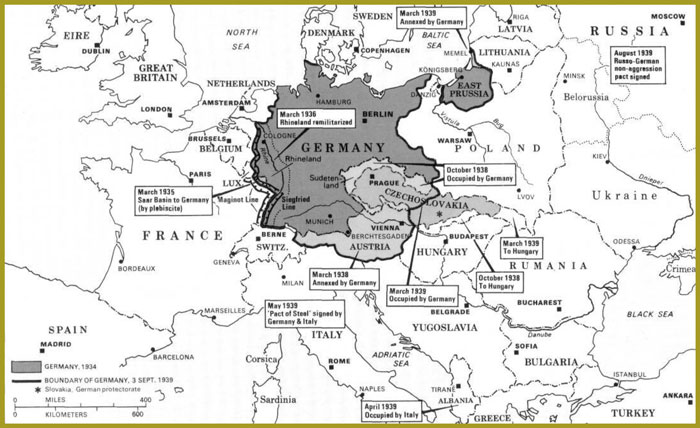 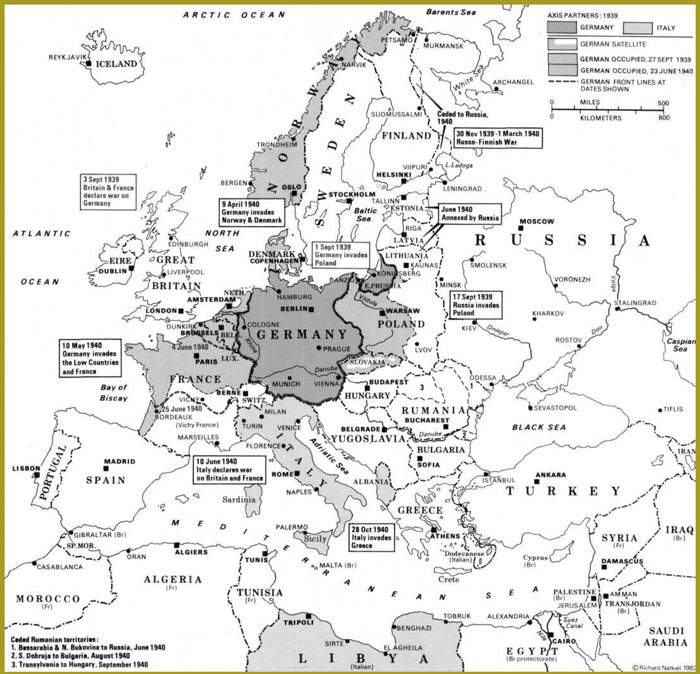 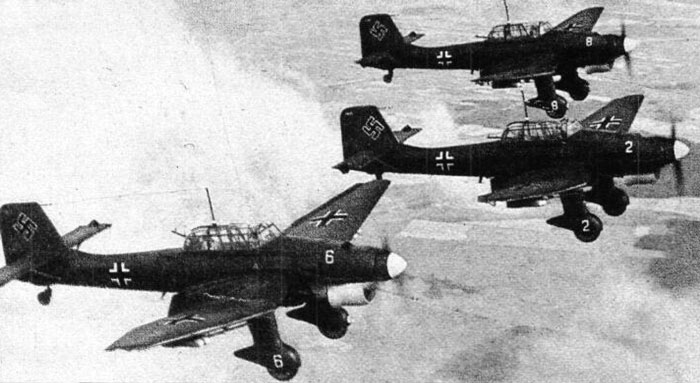 German Conquest at Its Height

Having been balked in his plan to invade the British Isles, Hitler directed his attention to the east, where he gained control of the Balkans in the spring of 1941. He shored up the tenuous Italian position in North Africa, then ordered the implementation of Operation Barbarossa - the invasion of the Soviet Union. Operations beginning 22 June 1941 inflicted great losses on the Red Army, but the expected quick and easy victory was not forthcoming. German confidence and supplies began to erode with the onset of an early winter that found troops unequipped for freezing conditions. The Russian Bear shook off its tormentors in a counteroffensive that prevented the capture of Moscow, then Stalingrad, in 1942. Russian civilians proved able defenders of their embattled homeland, and the Germans went onto the defensive in Russia. An ill-advised declaration of war on the United States after Pearl Harbor guaranteed open and active American involvement, with all the industrial and military strength that this implied. Hitler's Germany had overreached itself. 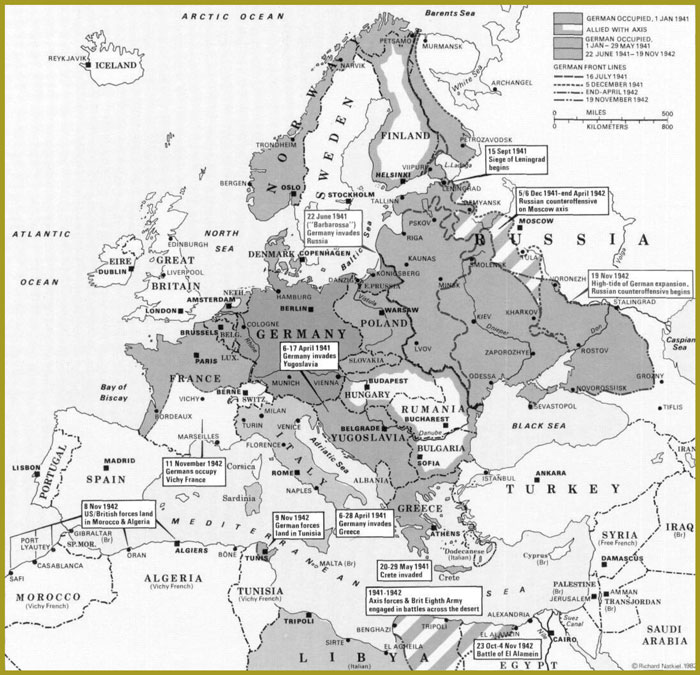 1942 saw the high tidemark of German expansion. Allied landings in North Africa combined with the Soviet counteroffensive on the Eastern Front were to turn the tide and sound the death-knell for Hitler's territorial aspirations.

Propaganda was used by all of the belligerents in World War II to incite patriotism and inflame popular feeling against 'the enemy,' both outside and within the country. Luridly illustrated Soviet posters trumpeted 'Kill the German Beasts!' and 'Destroy the Hitlerite Army - It can and must be done!' Soviet leaders did not feel fully confident of their peoples' loyalty in every phase of the war, in which they lost more soldiers and civilians than any other single belligerent.

Germany produced comparable war art from 1943 on, after the office of National Socialist Leadership was created. Psychological warfare played a major role in the German war effort, with the production of films, posters, magazines and other media that fostered unquestioning loyalty and hatred of minorities, who were accused of subverting the war effort. During World War I, propaganda had been so falsified by all parties involved that genuine atrocities like 'The Final Solution to the Jewish Problem' were widely disbelieved - until Allied liberation of concentration camp survivors in 1945 revealed the incredible truth.

The US propaganda effort was less obvious, but not necessarily less effective. Marine recruitment posters bore the legend: 'We're looking for a few good men,' emphasizing the Marines' reputation as an elite force. 'War Bonds' and 'Victory Gardens' abounded to foster wholehearted co-operation on the home front. 'Remember Pearl Harbor' was taken up as a powerful rallying cry in the war against Japan. Thus dictatorships and democracies alike waged the propaganda war with deep intensity and unshakeable conviction of the Tightness of their cause. 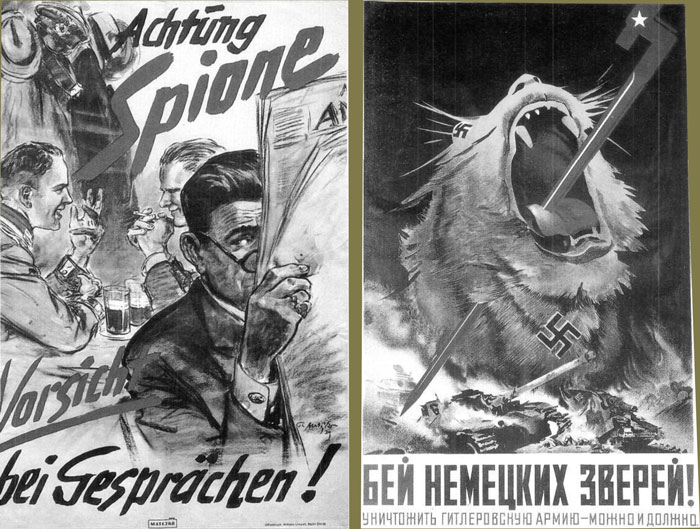 Two examples of war propaganda from German (left) and Soviet artists; their respective messages are clear. 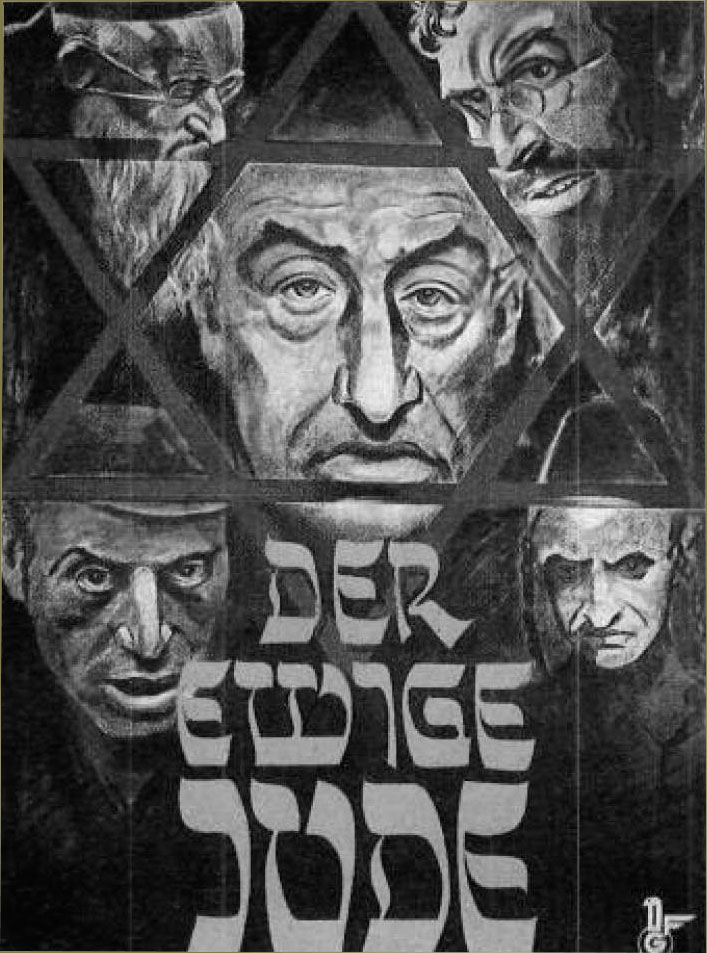 Anti-Semitic feelings found expression in such German posters as 'The Eternal Jew'. 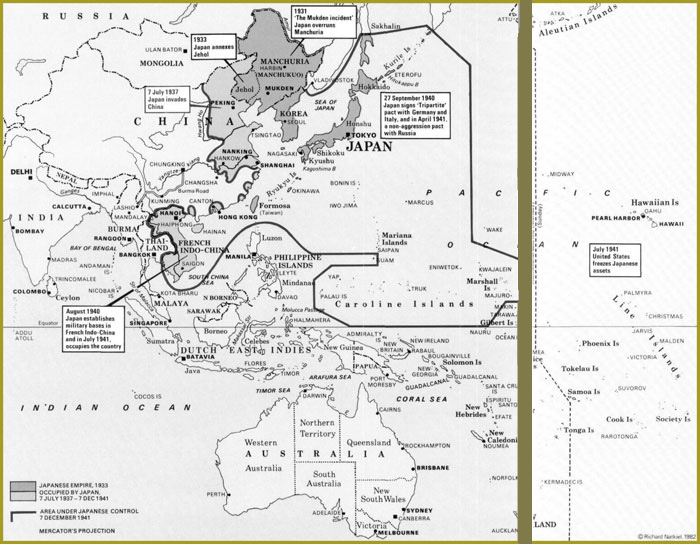 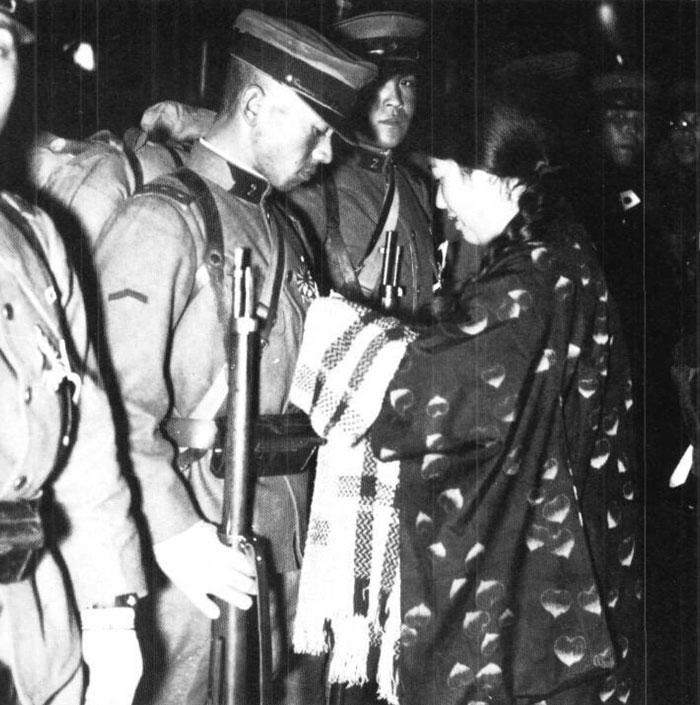 Soldiers return to Japan from Manchuria to a hero's welcome.

Japanese resentment at the Pacific settlement following World War I gathered strength through the 1920s. 'Patriotic Societies' agitated for an aggressive foreign policy, and the Japanese constitution gave the military a disproportionate voice in national affairs. The rise of Chinese Nationalism posed a threat to Japan's position as the leading Asian power, and the West was widely distrusted as racist in its attitudes - not without cause.

All these factors were involved in the Japanese seizure of Manchuria (1931), which was made by the so-called Japanese Manchurian Army acting independently of the government. Two years later, Japan withdrew from the League of Nations and accelerated her arms production. Serious fighting with China broke out in 1937 and resulted in Japanese occupation of most major Chinese ports and extensive areas of their territory.

To prevent the Chinese from being supplied through French Indochina, the Japanese put pressure on the area and ended by occupying it in 1941. This brought open opposition from the US in the form of an export embargo. Japan's recent pacts with the Axis Powers and the USSR had imperiled Allied interests in the Pacific, and stringent sanctions against Japanese trade and oil imports were decisive. Faced with the loss of 75 percent of her trade and 90 percent of her oil supplies, Japan sent her aircraft carrier force into the Pacific on 26 November 1941. On 2 December General Tojo, now militant Prime Minister of Japan, ordered it to attack the US Pacific Fleet at Pearl Harbor, Hawaii. 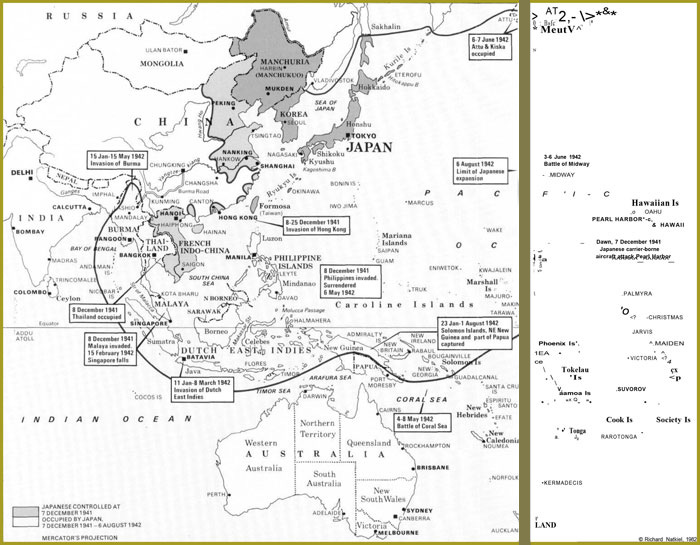 Japan's surprise attack at Pearl Harbor, Hawaii, on 7 December 1941 (below) raised the curtain on nine months of feverish expansion in the Pacific-yet the scale of this empire-building was destined to sap her strength.

The Japanese Sweep the Pacific

When the Japanese aimed their stunning strike at Pearl Harbor, their strategists expected - and achieved - a series of rapid victories in the Pacific. They had no real choice: without access to oil, their war machine would grind to a halt even as US industry geared up for new feats of production under wartime conditions. The oil-rich East Indies were an inevitable target, as were the Allied colonies astride the sea routes.

Available forces were relatively modest - some 80 percent of the 51 Japanese divisions were tied up in China and Manchuria. On the plus side, the outnumbered Japanese troops had good air support, jungle-warfare training and an impressive fleet that included 10 carriers and 8 modern battleships. (The US Pacific Fleet had nine battleships of World War I vintage and four carriers that - fortunately - were absent from Pearl Harbor when the initial attack was launched.) Japanese Imperial Headquarters believed it was possible to achieve their objectives within six months if they moved decisively, and for the first four months they effectively had the Pacific War to themselves.

At a cost of only 23 warships (none larger than a destroyer), the Japanese overran the Philippines, Malaya, Burma, the Dutch East Indies and a number of British islands between December 1941 and May 1942. Then the Doolittle Raidon Tokyo (18 April) awakened them to the danger of bombing on the home islands, and inflamed the Japanese 'Victory Disease' (as one of their leaders would call it). The Japanese resolved to extend their defense perimeter despite their diminishing resources - and thereby ensured that they would lose the war.

Japan's empire-building was finally curtailed as a two-pronged Allied offensive from the east and southwest forced a retreat. 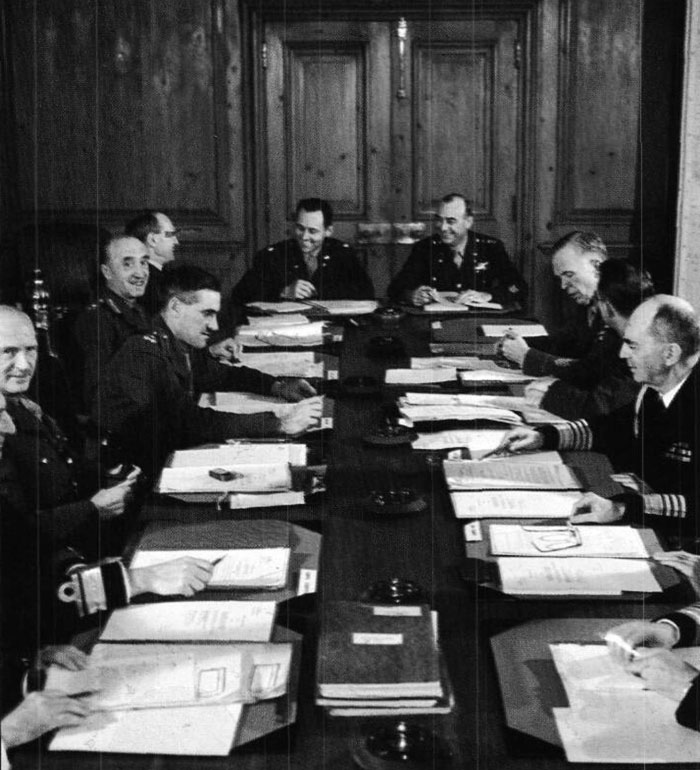 US and British combined chiefs of staff discuss A Hied strategy.

The Allies Strike Back at Japan

As US forces gained experience in the challenging Pacific Theater, their leaders saw the necessity for mounting two major lines of advance against Japan. US Navy carrier forces were strengthened for their essential role, amphibious assault capability was increased and a fleet train was created to supply the fighting ships hundreds of miles from their bases. These units were to advance toward Japan via the central Pacific islands. Test case for the 'island- hopping' strategy was Tarawa, where US forces fought one of the costliest battles in their history in proportion to the numbers engaged in November 1943. Three thousand US Marines were casualties, and only 17 of the 4000 Japanese defenders were captured. An intensive study of this campaign helped the Americans to avoid their mistakes on Tarawa in subsequent operations. They accepted the fact that the Japanese would have to be flushed out of their caves and bunkers one by one, using grenades, flamethrowers and anything else that came to hand.

The other half of the Allied offensive was in the southwest Pacific, where American and Australian forces under General Douglas MacArthur made slow but certain progress with massive support from land-based aircraft. Australian forces had a strong vested interest in defeating the Japanese, who were sure to attack their homeland if they could isolate it from American support.