On 12 March 1942, MacArthur was flown out and replaced by Lieutenant General Jonathan Wainwright, who frustrated several Japanese attempts to establish beachheads behind US lines. Not until 3 April, after reinforcement by a fresh division, were the Japanese able to launch their final offensive. Within a week's time, they had penetrated so deeply that US forces were compelled to surrender (7 April). The last American troops held out on Corregidor Island in a siege that ran from January until 5 May, when their artillery was almost entirely knocked out by unceasing bombardments. On that day, Japanese troops landed at Cavalry Point and established their beachhead. It was all over for the time being in the Philippines. 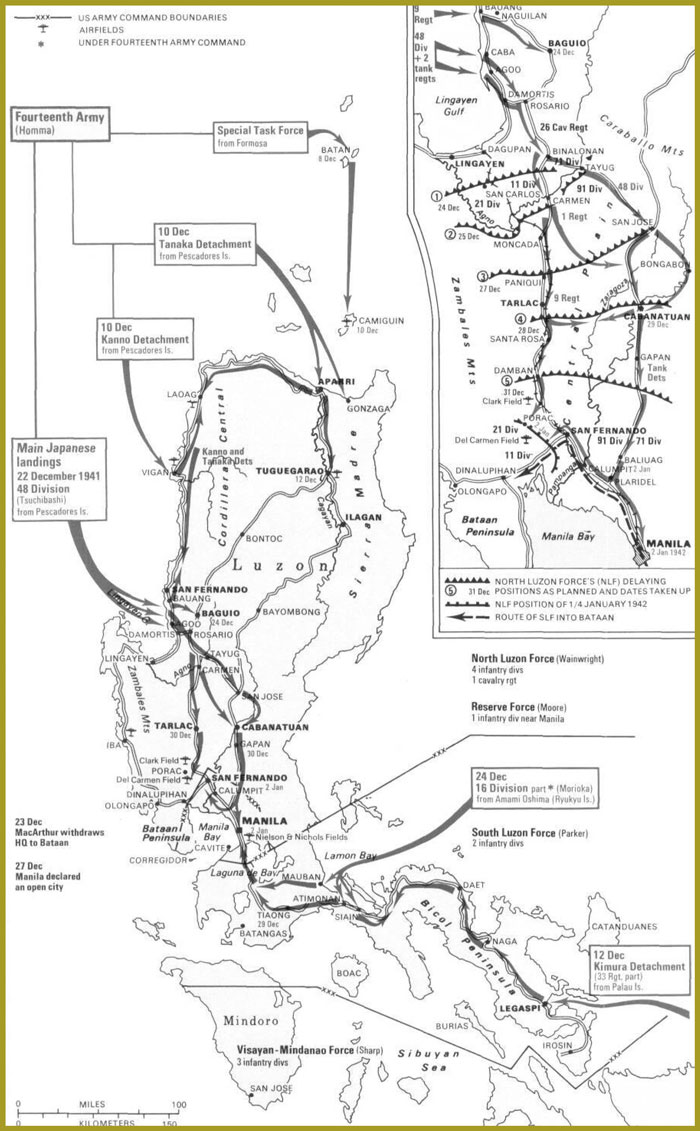 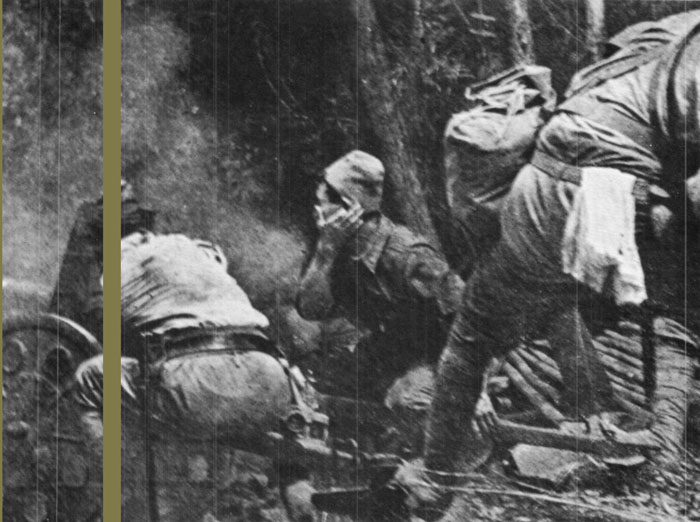 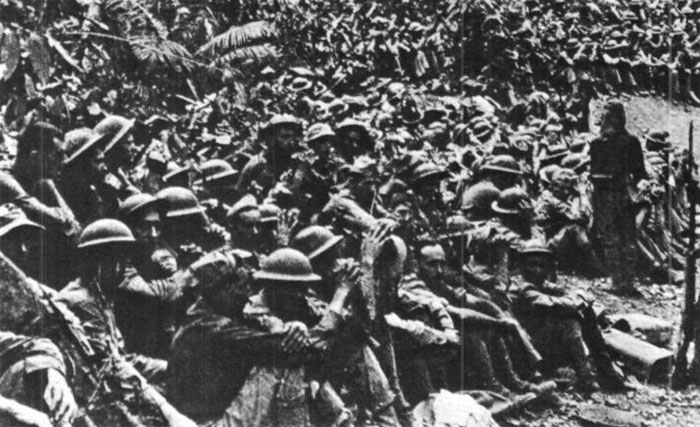 American prisoners of war under guard by Japanese troops after the surrender of Bataan.

The oil and other resources of the Dutch East Indies made them a prime target for occupation by Japan, which planned a three-part attack on the islands early in 1942. Western Force, from Indochina and newly captured Sarawak, would attack southern Sumatra, Western Java, and North Borneo; Central Force would attack Borneo from Davao; and Eastern Force would jump off from the same point against the Celebes, Amboina, Timor, Bali and eastern Java.

Defense of the islands was undertaken by a combined force of Allies in the Southwest Pacific: American, British, Dutch and Australian (ABDA). General Archibald Wavell and his forces had more courage than support, which consisted largely of a six-cruiser naval flotilla under Dutch Rear Admiral Karel Doorman. The attacks began on 11 January 1942, and proceeded relentlessly from one objective to another in the weeks that followed. Naval engagements off Balikpapan (24 January) and in the Lombok Straits (19- 20 February) provided only a slight check to the Japanese advance. On 27 February Admiral Doorman attacked the Eastern Force convoy in the Java Sea, where both Dutch cruisers were sunk before they could inflict any damage. In the aftermath, HMS Exeter was also destroyed, as were HMAS Perth and USS Houston when they resisted the Western Force on the following day - to some effect in terms of damage done. But on 1 March, the Japanese made their inevitable landing on Java, whose Allied defenders succumbed a week later. 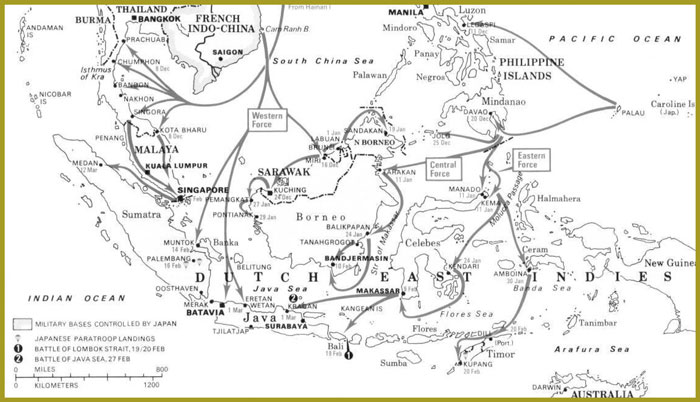 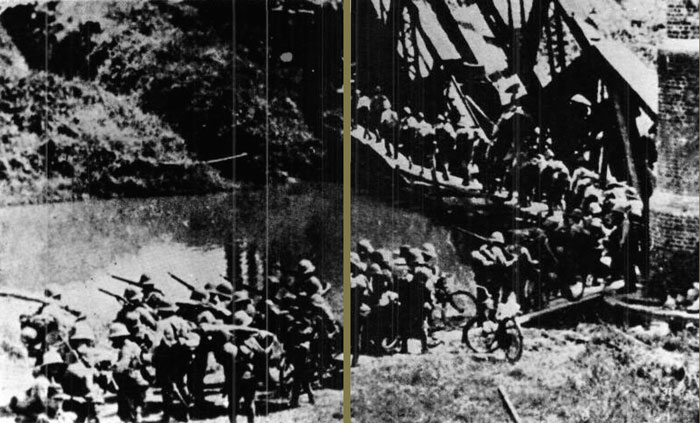 A Japanese column in Burma crosses a footbridge south of Moulmein.

The invasion of Burma was accomplished with little Allied resistance.

The Japanese invasion of Burma began on 15 January 1942 with the occupation of Victoria Point by a detachment of Fifteenth Army, which moved north to take Tavoy four days later. British defenses in Burma were pathetically unprepared to resist the Japanese invaders; only two brigades, one Indian and one Burmese, were able to counter the push toward Moulmein that began on 20 January. The British were then forced back from the town under constant threat of being outflanked, and from this point on fought a series of delaying actions all the way to Rangoon - the conduit for all British supplies and reinforcements. Air support from a single RAF squadron and a squadron of Major Claire Chennault's 'Flying Tigers' was insufficient to prevent the capture of Rangoon on 8 March. The British garrison there was very nearly cut off before it could pull out. Meanwhile, Lieutenant General William Slim had taken command of British ground forces, while General Harold Alexander had assumed overall command of the deteriorating British defense. The Chinese Fifth and Sixth Armies arrived to reinforce the Allies, but they fought erratically despite the best efforts of American commander General Joseph Stilwell. Throughout the month of April, Allied forces were in continuous retreat from the Japanese, who were now bringing in reinforcements and air support from conquered Malaya. By mid May they were in control of Burma. 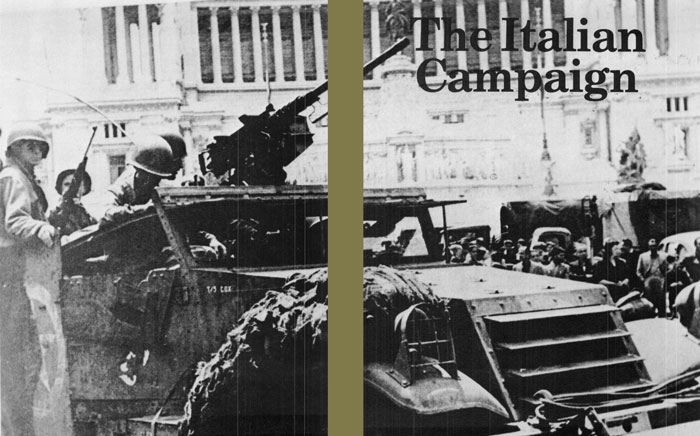 The Conquest of Sicily

When the Tunisian bridgehead collapsed on 12 May 1943, a demoralized Italy found herself in imminent danger of invasion. Serious strikes in industrial northern Italy had already warned both Mussolini and Hitler of the depth of national discontent. In a meeting with Hitler on 7 April, Mussolini tried - and failed - to persuade his ally to forget about Russia and concentrate on Mediterranean defense. On 5 May General von Rintelin reported to Hitler that an Allied landing in Italy would probably have 'most unpleasant consequences, in view of the prevailing atmosphere of fatalism.' Hitler remained adamant about his doomed adventure on the Eastern Front, which would finally collapse in July at the Battle of Kursk.

Even as Russian and German tanks battered each other in the Kursk Salient, the Allies launched their invasion of Italy, which Churchill had described as 'the soft underbelly of the Axis.' Aerial bombardment from North Africa struck Axis airfields and communications centers in Sicily, Sardinia and southern Italy, beginning in early June. Land forces for the invasion comprised General George S Patton's US Seventh Army and General Bernard Montgomery's British Eighth Army; they were transported to Sicily in a fleet of 3000 vessels. Axis defense of Sicily was entrusted to the Italian Sixth Army under General Alfredo Guzzoni, with strong German support.

On 10 July the Americans landed in Sicily's Gulf of Gela, the British in the Gulf of Syracuse. The landings were a surprise to the Italians, coming as they did in poor weather that seemed to preclude air- or seaborne operations. Vigorous German counterattacks against the Americans came from German divisions on 11-12 July, but Patton's force pressed on toward the north coast, clearing western Sicily by 23 July. Montgomery suffered a check at Catania, but small amphibious operations allowed him to continue his advance to Messina, which he reached on 17 August. Meanwhile, the Italians, who had offered minimal resistance from the first, evacuated the island. The Germans were left to fight a rearguard campaign until the Allied victory of mid August.

On 24 July 1943, Mussolini was overthrown. His replacement, Marshal Ugo Cavallero, began secret armistice talks with the Allies. Hitler suspected that the Italians were trying to take themselves out of the war and sent German reinforcements into northern Italy to safeguard communications. Field Marshal Albert Kesselring advised him that an Allied landing in Italy could be expected soon after the conquest of Sicily - probably on the Gulf of Salerno near Naples.

On 3 September, the day that the armistice with Italy was signed, British Eighth Army made a landing on the toe of Italy, at Reggio di Calabria - largely as a diversion. The main landing did take place at Salerno, on 9 September, after the secret armistice with Italy was made public. General Mark Clark's US Fifth Army, with British X Corps, secured only four small beachheads in the face of a well-prepared German defense. Farther south, Montgomery was advancing through Calabria, and there had been a second British landing at Tarante.

From 9 through 14 September, the Fifth Army was in serious trouble at Salerno. German shells from the surrounding hills, followed by a powerful attack on the 12th, almost cut the Allies in half. Reinforcements arrived two days later, barely in time to salvage the operation, and by 18 September Clark's forces had consolidated the beachhead. When Montgomery's advance units arrived on 16 September, Kesselring began to withdraw north to the Gustav Line, which ran along the Rivers Garigliano and Sangro. The Allies pursued from both east and west until 8 October, when a rest halt was called on the Volturno/Termoli Line. The terrain grew increasingly rougher and the weather more severe as the Allied advance resumed in mid October. 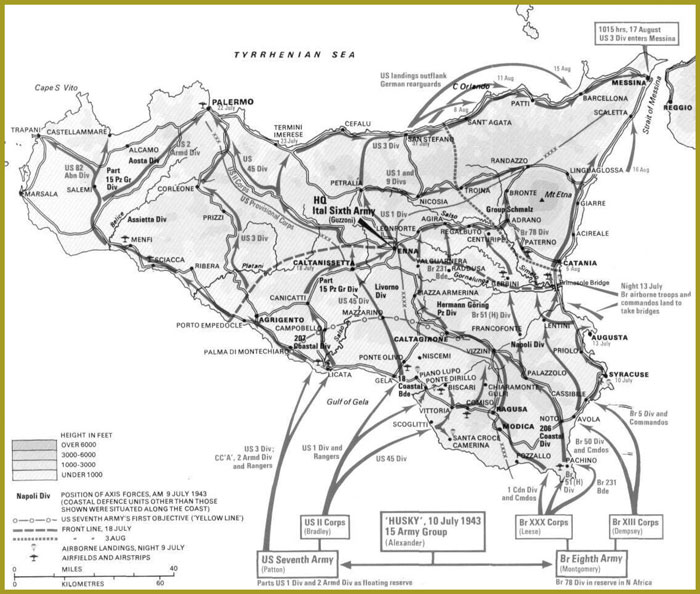 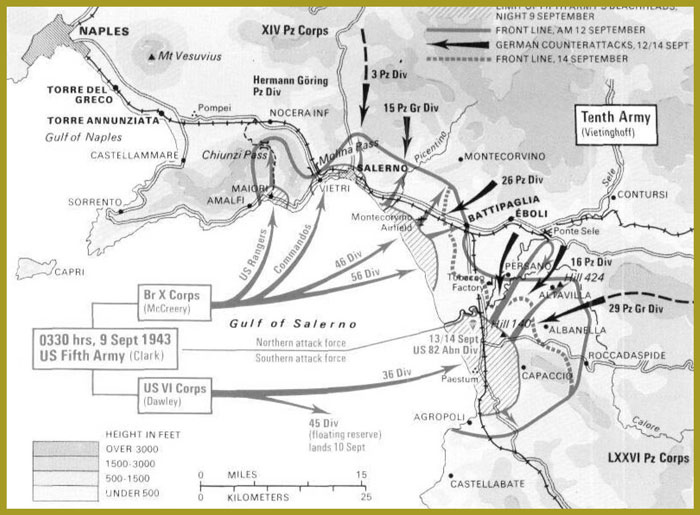 The main Allied landing in Italy was undertaken at Salerno by Clark's U S Fifth Army. 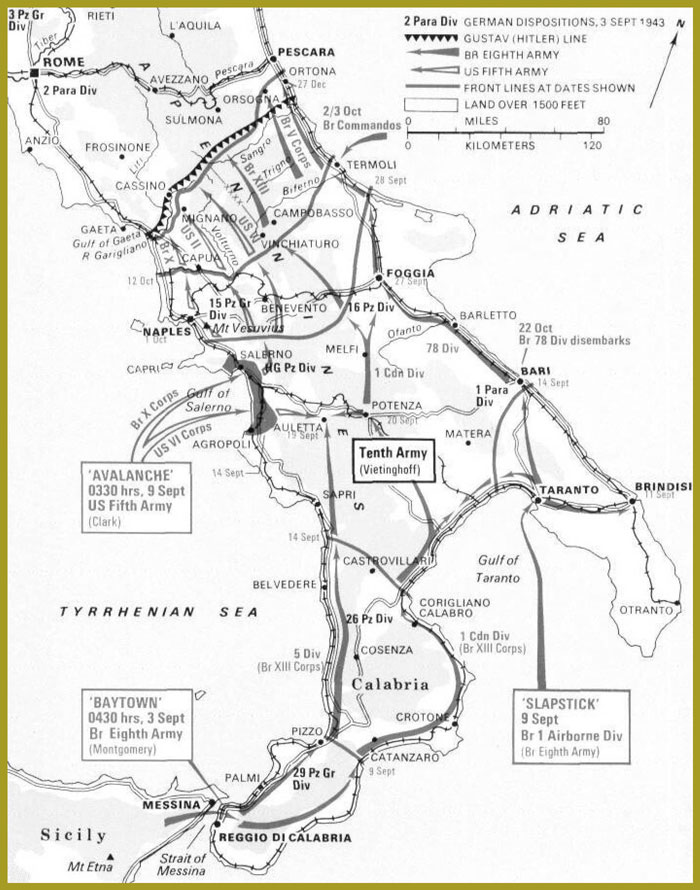 A diversionary attack at Reggio di Calabria by the British Eighth Army preceded the main attack, while a third landing was made at Taranto in the east.

Allied Drive on the Gustav Line

Fifth Army made a difficult crossing of the Volturno, swollen by autumn rains, beginning on 12 October 1943. The roadless mountains north of the river posed even greater obstacles. On the east coast, Eighth Army forced a passage over the Trigno River, but their progress on both sides of the central mountains was slowed by skillful German delaying tactics. Kesselring used the time gained to complete the impressive Gustav Line, which ran along the line of the Garigliano and Rapido Rivers, over the central mountains and north of the Sangro River to the Adriatic. German Tenth Army held the line under General Heinrich von Vietinghoff. The western end was especially strong, as it was backed by the mountains on either side of the Liri and by Cassino.

On 20 November US Fifth Army attacked this strong sector, at a very high cost in casualties. Painful progress brought Fifth Army almost as far as the Rapido, but there it was halted at year's end by arctic weather conditions. Montgomery had forced the Sangro on 15 November and broken through the line east of Lanciano. The British took Ortona on 27 December. 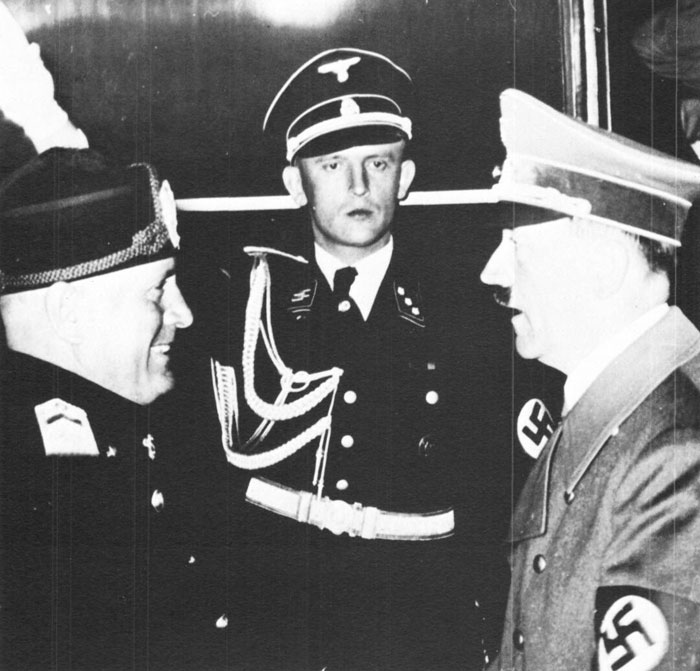 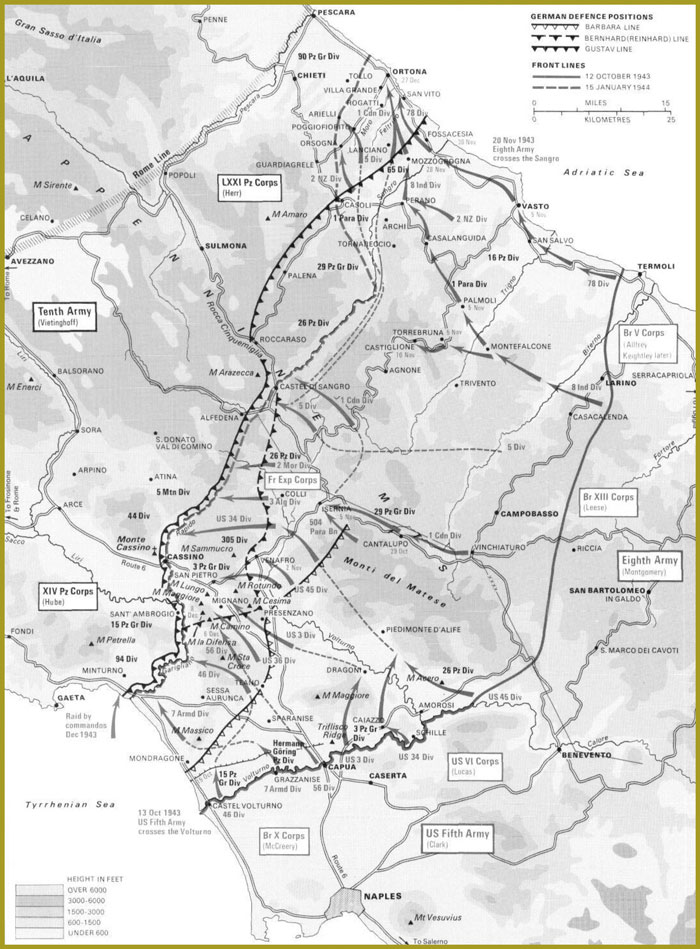 The Germans were less prepared to yield than their former allies, finally establishing the Gustav Line as 1943 ended.

The Fight for Monte Cassino

The ancient abbey of Monte Cassino astride the Gustav Line was the object of heavy fighting in the early months of 1944. The Allies made a frontal assault on the almost impregnable position on 17 January, but a whole series of attacks failed to take it by storm. The French Expeditionary Corps had joined the Allied forces in Italy, but they made only limited advances with very heavy casualties. The New Zealand Corps suffered similar repulses between 15 and 18 February.

A long hiatus followed the first offensive, during which the Allies regrouped and reinforced for a new effort, launched 11 May along a 20-mile front between the area east of Cassino and the sea. The British pushed over the Rapido but were then contained by the Germans, The Americans broke through the Gustav Line along the coast, only to be stopped at Santa Maria Infante. It was the French Expeditionary Force that crossed the Garigliano and cut the German lines of communication; interdiction of German supplies to the point of starvation was also a factor. On 17 May Kesselring conceded the loss of this key position by a withdrawal. The historic abbey had been riddled with tunnels and redoubts to protect its defenders from heavy bombardment; it was reduced to rubble by the time the Allies claimed it on 18 May, at the cost of many lives.

Initial Allied attempts to break the Gustav Line at Cassino in early 1944 met with failure.

Little remained intact after the abbey at Monte Cassino was finally overrun by the Allies on 18 May.