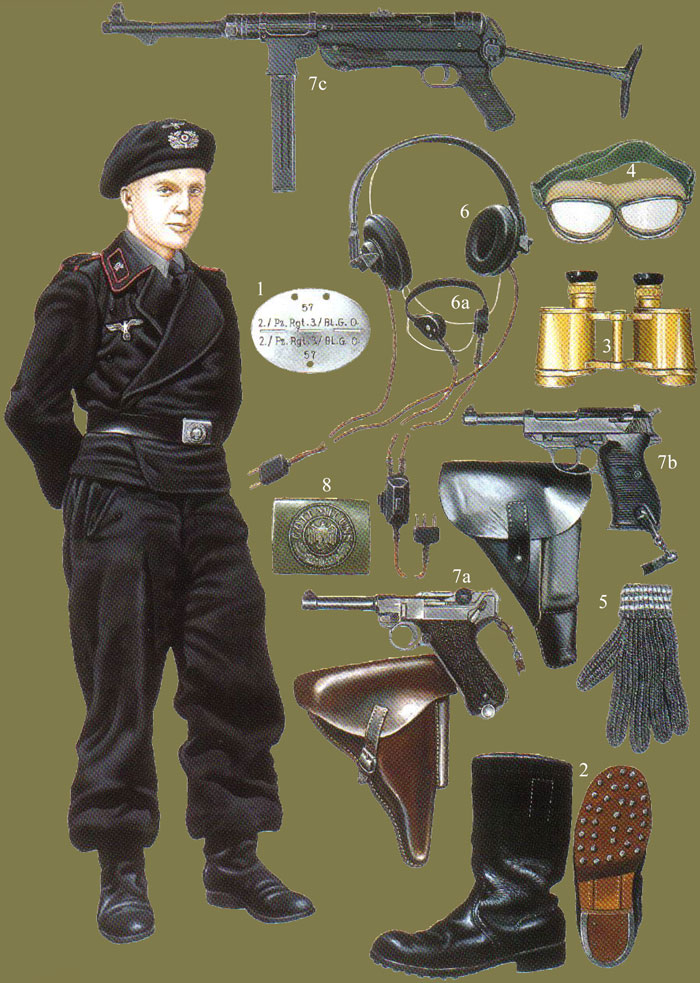 Our Panzer crewman is shown as he would appear just before the outbreak of the Second World War. He wears the early version of the black Panzer clothing, comprising short shaft jackboots, long baggy trousers tucked into the boots, and a smart waist-length, double-breasted jacket. At the start of the war, crewmen wore the early Panzer beret, which consisted of a large floppy beret, pulled over a stiff crash- helmet-style protective interior. By 1940 a more practical field cap modelled on the field grey version worn by other army units had begun to replace the Panzer beret. In fact, many photographs from the early part of the war show the field grey cap being worn by tank troops because of initial shortages of the black version. This soldier's early style jacket still features the rose pink piping of the Panzertruppe around the jacket collar. Similar piping also features on the shoulder straps and as a surround to the collar patches. His shoulder straps bear the number '3' in pink thread embroidery, indicating his membership of Panzer Regiment 3. The belt worn is the standard army version in black leather with an aluminium or silver-painted, steel buckle. His cap insignia and breast eagle are woven in white artificial silk on black.

The inset artwork shows a range of personal equipment used by the Panzertruppe:

A1 The soldier's personal ID disc. This disc shows his personal number, his blood group and his unit designation. The example illustrated indicates the individual was soldier number 57, had blood group O, and was a member of 2. Company, Panzer Regiment 3. Should the soldier be killed, the disc was snapped in half, one half was interred with the body and the other half returned to his unit.

A2 Boots. Panzer soldiers wore jackboots with short shafts, either with or without heavy hobnailed soles.

A3 Binoculars. Despite the many large powerful binocular sets available to the German armed forces, the standard issue set, as shown here, was the modest 6×30. By the latter part of the war, most were painted in a colour known as 'ordnance tan'.

A4 Goggles. Driving across the dusty Russian Steppe or the sands of North Africa meant that goggles to protect the eyes were an essential piece of kit to the Panzer soldier. A variety of types were produced.

AS Gloves. The German army Panzer soldier was issued the same knitted woollen gloves as his infantry counterpart. They were machine-knitted in grey wool with a series of white bands woven into the cuffs to indicate size.

A6 The tank crew headset, as shown, was worn in conjunction with a throat microphone (A6a). These were essential pieces of kit if the crew were to hear the orders of their commander over the noise of the engine and any gunfire.

A7 The standard personal weapon of the tank crewman was the P.08 Luger (A7a) or the more efficient P38 pistol (A7b), each of which had its own distinctive holster as shown. Larger tanks were also fitted with a bracket inside the turret to hold an MP38/40 machine pistol (A7c).

A8 Belt buckles. Tank troops of the army, Waffen-SS and Luftwaffe all wore their own distinctive style of belt buckle as shown here. For combat duties the buckles worn by the army and Waffen-SS were usually painted an olive colour and those of the Luftwaffe a dark blue. It did not take long for this paint to be worn off in use, however, and buckles soon attained a natural steel finish.

PLATE B: DRIVER AND GUNNERY TRAINING

Driver training was carried out using the chassis of obsolete light tanks, such as the Panzerkampfwagen PzKpfw I, with the turret and forward superstructure removed. Army driving instructors and instructors from the Nazi Motor Corps (National Socialistische Kraftfahr Korps or NSKK) trained recruits.

At the outbreak of war, the NSKK had also assisted the army in traffic control duties during the Polish campaign. As the war progressed, the NSKK was tasked with the pre- and post-military training of males between 18 and 45 in mechanical skills and to assist in providing recruits for the Panzertruppe. In the late, desperate stages of the war, the NSKK also created ad hoc armoured vehicles for the home guard by adding steel armour to civilian vehicles.

Here, an NSKK-Oberscharführer is giving driving instructions to a young recruit from the Panzertruppe, who is hoping to gain his Führerschein (Driving licence endorsement for fully tracked armoured vehicles). The instructor sits in what would normally be the radio operator's seat in a tank, to the right, with the driving position at left. Just in front of the driving positions there was normally a safety rail, or less commonly, a windscreen. Sitting behind the instructor and trainee are three other potential tank drivers awaiting their turn at the controls.

Older tanks were steered by two braking levers. If the left brake was applied, the left track would stop or slow down whilst the right track maintained speed, causing the tank to rotate left. Foot pedals controlled the accelerator and clutch. An experienced tank driver could, nevertheless, spin even a large tank in a small area. The tank is negotiating a very steep slope, giving the driver an inkling of what crosscountry travel in an armoured vehicle would be like.

The second illustration in this plate shows a troop of Tiger tanks on the firing range. Positioned in line abreast, they take turns at shooting at their targets approximately 1 km away whilst their instructor observes their fall of shot with binoculars. German tank optics were of excellent quality, and skilled gunners could achieve an astonishing degree of accuracy. The killing range of a Tiger was over 2 km.

Accuracy, and therefore practice, was extremely important to tank crews, especially when one considers that stabilising mechanisms were rare. Tanks generally had to come to a full stop before they could accurately aim and fire their guns, so firing on the move, which is a practice common in today's armed forces, was a luxury that was not available to the Panzertruppe in the Second World War. Of course, once a tank had stopped it immediately became a prime target for enemy gunners, so the ability to snap off an accurate shot was paramount. The number of true tank aces in the Panzertruppe indicates that most German tank gunners learned their craft well on the practice range. 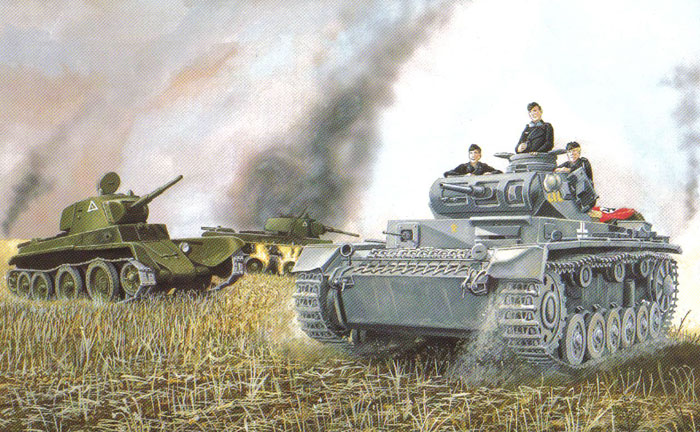 The markings on the fender of this tank show that it belongs to 14. Panzer Division, The basic colour of German tanks at this period in the war was the so-called Panzer grey. This was not a particularly effective camouflage colour, but as shown here, the tank soon became covered with a thick coating of dust, which muted its dark colour. The original colour scheme was soon changed for a universal base coat of 'tank yellow', a tan colour, which could then have appropriate camouflage pattern applied by the crew to suit the terrain in which they were fighting. Each tank was issued with paints in green and brown colours, which could be thinned using petrol and applied using a spray gun, or simply roughly daubed on with a brush.

In the hot summer of 1941, the temperature in the interior of the tank would have been unbearable, so the vehicle is proceeding with all hatches open in an attempt to regulate the heat. The gunner and loader are sitting in the turret side hatches, and the commander stands in his cupola. The hatches on the front of the hull for the driver and radio operator are also opened. The enemy are not in the immediate vicinity or the hatches would be battened down, and the commander is scanning the distance with his binoculars as his tank races to catch up with the spearhead of his unit. The background is littered with knocked-out Soviet BT light tanks. The BTs were no match for the Panzers, but the Germans were soon in for a serious shock themselves when they ran into the Red Army's T-34, a superb medium tank whose armour deflected the German tank's shells with ease and allowed the Soviets to pick off their opponents long before the Germans could get close enough for their own guns to be effective. As was common with tanks of most nations, the crew's personal belongings soon began to drape the exterior of the vehicles. Steel helmets were hung from hooks on the turret, as shown here, crates of rations were stowed on the engine decking and racks were fabricated to hold spare jerricans of fuel. As much extra fuel as possible was carried, as the rear supply units often failed to keep up with the fast-moving armoured spearheads. The turret roof in front of the commander has been covered by a large German flag. The melee on the battlefield often became confused and the German rate of advance so fast that such recognition measures helped prevent German vehicles being dive-bombed by their own aircraft.

Panzer 'Ace' SS-Oberscharführer Ernst Barkmann after the award of his Knight's Cross. He wears the SS pattern Panzer jacket. On his left sleeve is his unit cuff band Das Reich. It is interesting to note that, despite being eligible to wear the Panzer Assault Badge for 25 engagements, Barkmann elected to continue wearing the Infantry Assault Badge earned earlier in the war. (Barkmann) 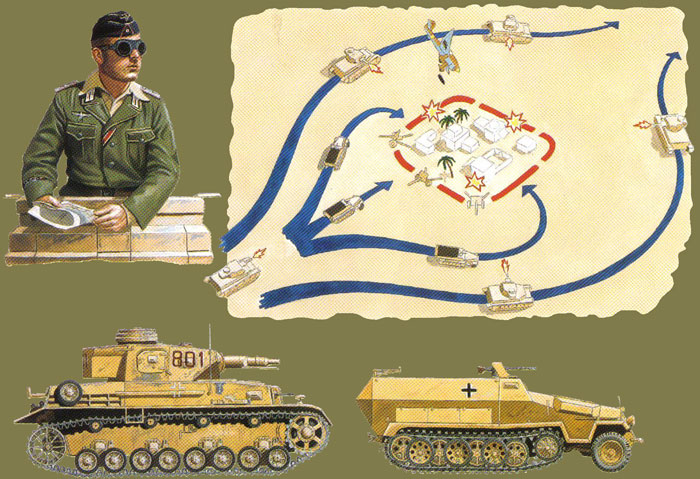 Panzerwaffe face a defended enemy position in this illustration, and so the target is first 'softened' up by bombardment both from artillery and by dive-bombing attacks from Ju87 Stukas. The Stuka was obsolete by the beginning of the war, but it remained a highly effective dive-bomber provided it was given sufficient fighter escorts to protect against enemy fighters. The Stuka had air-driven sirens fitted so that when it went into its attack dive, a loud wailing sound was produced. The psychological effect could be almost as effective as the physical.

The Panzers in this case will be PzKpfw IV. Armed with a short-barrelled 7,5-cm gun and intended principally for infantry support roles, its armament was effective against defended targets, but less so against enemy tanks due to the low muzzle velocity. Later models, armed with the long-barrelled high velocity version of the 7,5-cm gun, would become the mainstay of the Panzerwaffe throughout the remainder of the war. They would never be fully replaced by superior tanks like the Panther.

The tanks illustrated will carry out a classic 'pincer' movement whilst continuing the bombardment of the target area, eventually completing the encirclement of the enemy-held area before moving on to the next objective. The attack would begin whilst the aerial and artillery bombardment was still underway, (see rule 20 of the Golden Rules on page 17).

As the bombardment continues, Panzer Grenadiers in their SdKfz 251 armoured half-tracks make a three- pronged attack, hitting the enemy front-line defences and their flanks before they have time to fully recover from the effects of the bombardment. The SdKfz 251 was the workhorse of the Panzergrenadiers, and it existed in a bewildering number of special-purpose variants. The standard armoured personnel carrier could hold a squad of 12 troops, including the driver, and carry them at a top speed of 53 kph. It was armed with two dismountable 7.92-mm machine guns.

The addition of true Panzergrenadier battalions to Panzer divisions in place of the lorried infantry, meant that at last these troops, whose dedicated job was to support the tanks in action, could ride alongside them into battle in their own fast, manoeuvrable, armoured transport. Tank crews operating in North Africa generally wore the same olive green, lightweight canvas clothing as their non-armoured brethren, though occasionally, as shown here, the black Panzer Feldmütze would be retained. The popular tropical field cap was not widely worn by tank crews, as the peak interfered with use of the viewing periscopes.