The T-34 and other opponents

Following the invasion of the Soviet Union in June 1941, German Panzertruppe received a nasty shock when they encountered the Soviet T-34 tank, a weapon that outgunned many of the current German vehicles, and which had superior armour protection and a much higher top speed. German tank losses grew inexorably over the years that followed. Each new or improved German tank seemed to be met by an improved and up-gunned T-34 or one of the huge new Josef Stalin tanks. In sheer volume alone, German tanks rarely gained anything other than very local superiority in numbers. Though the Germans tended to use their tanks with much greater skill than the Soviets, their losses were harder to replace. Whilst German tanks on the Western Front retained technical superiority over Anglo-American armour, Allied control of the skies left any German tank that dared move during daylight hours at the mercy of marauding lighter bombers. 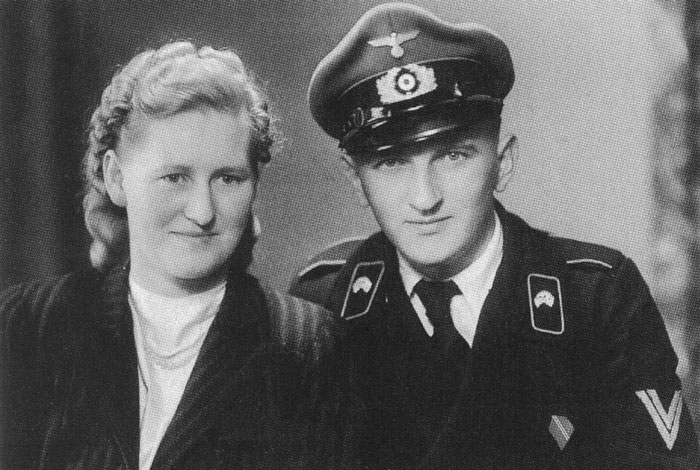 A Panzer Obergefreiter poses with his sweetheart, providing proof that Panzer men would wear their smart black uniform at every possible opportunity. (Robert Noss)

No mercy for Panzer crews

Panzer crews were also somewhat disadvantaged by the uniforms they wore. Whilst Allied intelligence were fully aware of the range of uniforms and insignia worn by Panzer crews, many Allied front-line combat servicemen saw a black uniform and death's-head collar patches, and assumed the wearer was a member of the SS.

One former Waffen-SS soldier from Silesia provided the author of this book with a clear illustration of the perils of wearing the black uniform. He described how he was captured in Normandy wearing a new field grey tunic he had obtained to replace his existing tattered one. No insignia had yet been added to the new tunic. He was held prisoner in an old farmhouse with several other captured Germans, including some seriously wounded Panzer crewmen in black uniforms. Some time later, free Polish troops entered the farmhouse. Because of his Silesian dialect and the lack of insignia, he was able to pass himself off as an ethnic Pole forced to serve with the Germans. The Poles, who tried to encourage him to join the Free Polish Army, thus treated him very well. They then went into the next room, spotted the wounded Panzer crewmen in their black uniforms, took them for SS and shot them on the spot. So innocent army tankers had been shot whilst a member of the SS the Poles hated so much was treated like a long-lost brother.

Despite the dangers they faced, tank crews formed a strong team bond. Each man depended on his crewmates. One incompetent soldier in a five-man crew could spell disaster to them all. Good crew members worked as a team, functioning as a single entity when they went into action.

War draws to a close

By mid-1944, the Allies had achieved almost total control of the air on both fronts and rocket-armed fighter-bombers prowled the skies looking for German tanks to hunt down and destroy. Later war photographs inevitably show Panzers festooned with camouflage, and wherever possible moving under the cover of trees or even better, under the cover of darkness, but rarely on open roads. Many pictures show tank commanders scanning the skies with an anxious look, expecting the deadly Jabos (fighter bombers) to appear at any moment.

Lack of fuel, lack of spares, lack of trained crews all played their parts in reducing the effectiveness of the Panzertruppen in the final days of the war. Dotted around the various fronts, however, were a hardcore of expert veterans who still had the ability to halt the enemy in their tracks. There were even several cases of a lone Königstiger appearing on the battlefield and halting an enemy advance on the spot. By May 1945, the German battle tank had evolved from the miniscule 7-ton Panzer I, which was armed with just two machine guns, to the mighty Königstiger at 70 tons and armed with a long-barrelled, high-velocity 8.8-cm gun. Its weaponry was capable of destroying any enemy tank in existence, even at extreme ranges.

What had not changed, however, was the dedication and tenacity of the typical Panzermänner, who fought to the last moment of the war. Their mighty Panzer divisions, by that point often reduced to just two or three operational tanks, the Panzertruppen could go into captivity with heads held high, and with pride that their elite status was intact. 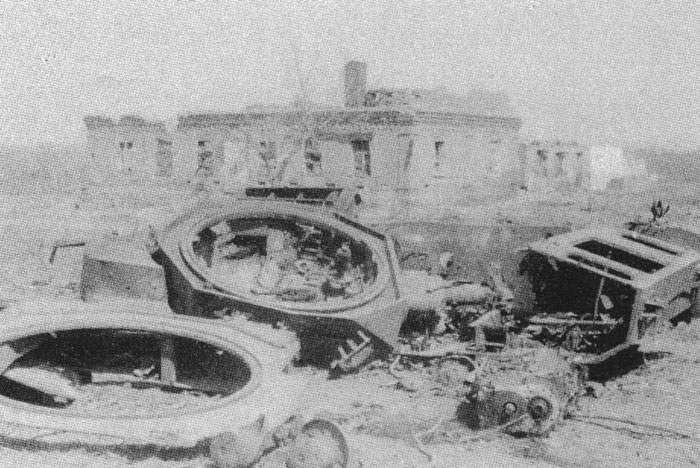 The fate of a huge number of German tanks, and their crews, is reflected In this sombre picture of a Panzer IV that has received a direct hit from enemy gunfire. The effect of such a catastrophic hit on the crew members can only be imagined. (Robert Noss)

Panzer items have always been extremely popular with militaria collectors and must now be considered amongst the most desirable of all Third Reich period militaria. Regrettably, as one might guess, the rarity and desirability of Panzer memorabilia has resulted in faking on a vast scale. One tailoring firm in Germany produces well nigh perfect copies of the full Panzer uniform from trousers to jackets and caps, using original patterns and manufacturing specifications.

The only thing missing is the insignia. Needless to say, once these copies reach the hands of unscrupulous militaria dealers, top-quality replica insignia, or even original insignia is added, the uniforms artificially aged and then passed off as originals. So good is the quality that even experienced collectors may be caught out.

In many cases great care is taken to use cotton threads and natural materials in the manufacture of these items so that no give-away nylon threads or modern manmade fibres are present. Even in more recent examples, where modern materials have been used, the use of burn tests on thread (cotton burns to an ash, nylon melts) or black light testing (modern white threads and material will often glow brightly under UV light) is hardly convenient when examining a proposed purchase in a shop or militaria show. Few dealers will relish a prospective customer corning close to a valuable piece of clothing with a naked flame!

Rare Panzer unit cuffbands are also being widely reproduced in both hand- or machine-embroidered and machine-woven form, exactly as the originals. Many excellent copies of machine-woven cuffbands are made in Germany by firms that manufactured insignia during the Third Reich. As these insignia do not show the prohibited swastika, they can be manufactured quite legally.

Copies of hand-embroidered cuffbands and other insignia are also made in India and Pakistan where labour costs are lower and natural fabrics are still widely used. Whilst early copies from the Indian sub-continent were generally unconvincing, more recent copies are frighteningly close to the originals.

Few pieces of Third Reich militaria have been forged to die extent suffered by medals and awards. The Panzer Assault Badge is no exception. In particular the 'numbered' Panzer Assault Badges have been expertly copied in recent years. With original examples of the '100' Panzer Assault Badge selling, at the time of writing, at well in excess of £1,000, it has become well worth the effort for the forgers to perfect the accuracy of his copy. There is virtually no aspect of Panzer militaria that has not been copied. Uniforms, headgear, insignia, badges, medals, flags and pennants, documents, pay books have all been forged and copied. If it has a value to the collector, it will have been faked. There is no easy answer to this problem. Collecting Panzer militaria can be an extremely interesting and rewarding hobby, but collectors must be sure to buy from reputable sources and always secure a money-back guarantee. Many reputable dealers will now offer a written lifetime money-back guarantee of originality with the goods they offer, and this reassurance will go a long way towards helping the collector who has just parted with large sums of hard-earned cash.

It is also astonishing that so many collectors fail to build their hobby on the firm foundation of a good reference library. There are some excellent reference books available that will help the collector avoid the many pitfalls that lie in his way. A modest sum spent on researching one's subject before spending large sums of money on rare collectibles will surely help avoid the heartache of discovering one's prized collectibles are post-war fakes.

Abteilung - Detachment of up to battalion strength

Cupola - The drum-shaped fitting, usually with vision periscopes, leading into the tank turret, onto which is fitted the entry hatch

Feldherrnhalle - A military memorial in Munich

Soldbuch - A small pocket book, doubling as an ID document, in which was recorded promotions, pay, postings, leave and other personal details

Sütterlin - An old form of German handwriting script that has now fallen into disuse. It is almost impossible for anyone unfamiliar with this script to decipher it, especially once the vagaries of individual handwriting are taken into account.

Wehrkeis - The Military District. Germany was divided for administrative purposes into a large number of such districts