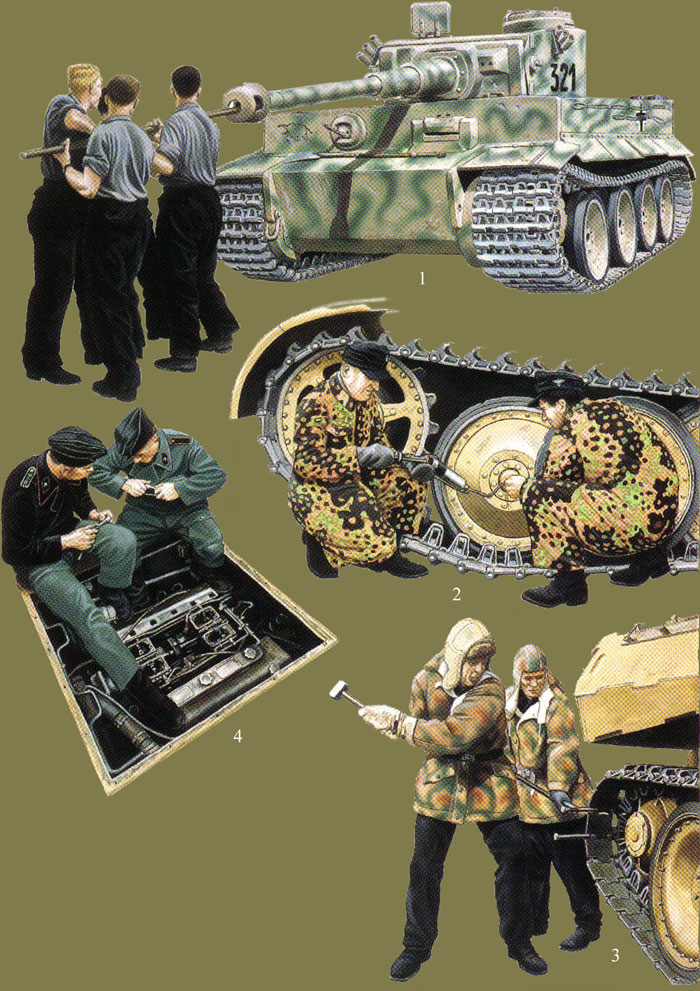 By the latter stages of the war, German armed forces could boast some of the finest tanks in the world. However, the rapid development of these impressive fighting vehicles made them prone to mechanical failure. In general, German tanks were highly engineered and needed far more care in the field than, for example, the simple but robust machines that equipped the Red Army. Here we see some of the typical day-to-day maintenance duties being carried out.

E1 One of the most important Panzer maintenance tasks was cleaning out the gun barrel. Gun barrels should last for many years, but grit, powder residue and other factors slowly erode the quality of the bore and necessitate a barrel change. Of course, many tanks were lost to enemy action long before the bore of the main gun became excessively worn, but nevertheless cleaning and maintenance of the weapon was as important to the tank crew as cleaning a rifle to an infantryman.

E2 Lubrication of the running gear. German tank design in the second part of the war, in particular on the Panther and Tiger series, made use of interleaved road wheels. This design, coupled with wide tracks, proved an efficient way of spreading the weight of these vehicles, and it meant that even such behemoths as the King Tiger could traverse relatively soft terrain without bogging down. The detrimental side of this design, however, was that the space between the wheels could become clogged with dirt and mud, and photographs often show Panthers and Tigers with the lead outside road-wheel left off, thus avoiding a serious build-up of mud or other obstructive material in this area which could in extreme situations ultimately cause the tank to throw a track. Maintenance of the wheels was, therefore, a very important task.

E3 Track tensioning. The correct tensioning of tank tracks depending on terrain, climate and other factors was essential. If incorrectly tensioned, a track could be thrown during combat, thus disabling the vehicle. Here, one crewman is hammering in a track link-pin, whilst the other adjusts the tensioning mechanism.

E4 Engine maintenance. Most of the larger German tanks were relatively underpowered. The engines fitted to most of these tanks were only just up to the task of powering such massive vehicles, and prolonged combat use over short periods would often result in breakdowns, so engine maintenance was of paramount importance. The illustration shows two Panzerwarte (tank mechanics) engaged in maintenance work on the 694 BHR Maybach HL 230 P45 engine of a Tiger tank, capable of propelling this mighty beast at the majestic top speed of just 19 kph! Although crew members, particularly the driver, would be involved in engine maintenance, Heereswerkmeister (army specialists), who were not strictly soldiers but technicians in uniform, were also attached to Panzer units. 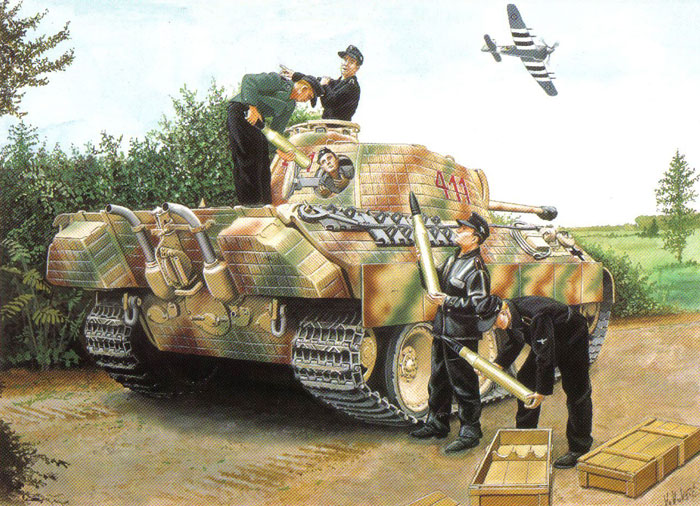 The Panther was one of the best medium tanks of the Second World War. Its sloped armour was closely modelled on that of the T-34, and its superb 75-mm high-velocity main armament made it an extremely potent weapon. Plagued by early mechanical difficulties because it was rushed into action too soon, by mid-1944 it had become a popular tank with its crews. Its deadly main armament could easily tackle the armour on any Allied tank on the Western Front, whilst its excellent armour protection meant that most Allied tanks had to get well within the Panther's killing range before its gun could be effective against the thinner side or rear armour. The Panther also had a very respectable turn of speed (top speed: 46 kph) for such a large, heavy vehicle. Many German tank aces scored their greatest successes with the Panther.

In Normandy, however, the greatest threat to the Panther was not in the shape of enemy tanks, but in the Allies' total control of the skies. Tank-busting fighter-bombers prowled the Normandy skies looking for victims. Once spotted, the enemy tank had little hope of escape. Many German units would only move their vehicles at night, remaining stationary and, wherever possible, camouflaged during daylight.

The Panther shown here has expended all its ammunition during heavy combat, and it is in the process of being re-stocked. The tank is in the partial cover of some trees and has been heavily camouflaged with foliage. The 75-mm shells were supplied in wooden cases, and a supply of these has been dropped off for this vehicle. The supply troops, not wishing to hang around with their dangerous cargo, have left it to the crew to load up the Panther with fresh ammunition. One man opens the boxes, another passes the shells up to a comrade on the engine decking who, in turn, passes it to a crewman inside the tank via the rear turret escape hatch. Note that one of the crewmen is wearing a suit of naval leather clothing. Tank crews often used such suits as the leather gave some protection against burns. The commander, keeping a wary eye out for enemy aircraft from his position in the turret cupola, has been startled by the appearance of a Typhoon rocket-carrying fighter-bomber and yells a warning to his crew as the aircraft prepares to unleash its deadly cargo. 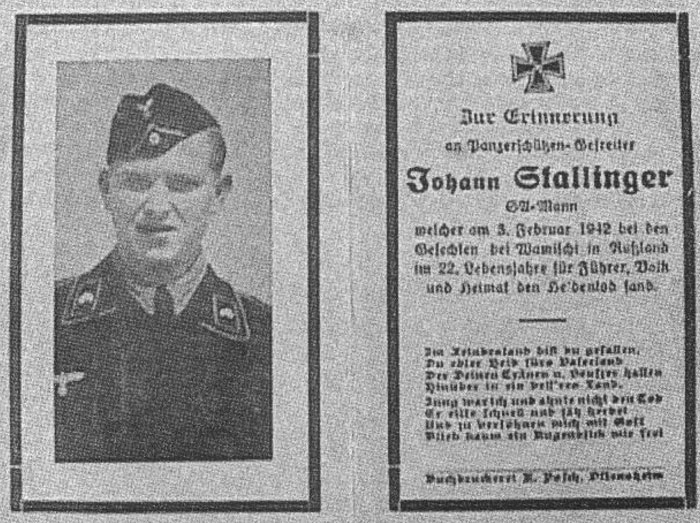 A commemorative death notice of the type given to family and friends of the deceased relates to the death of Gefreiter Johann Stallinger on 3 February 1942 in action on the Eastern Front. (Wade Krawczyk) 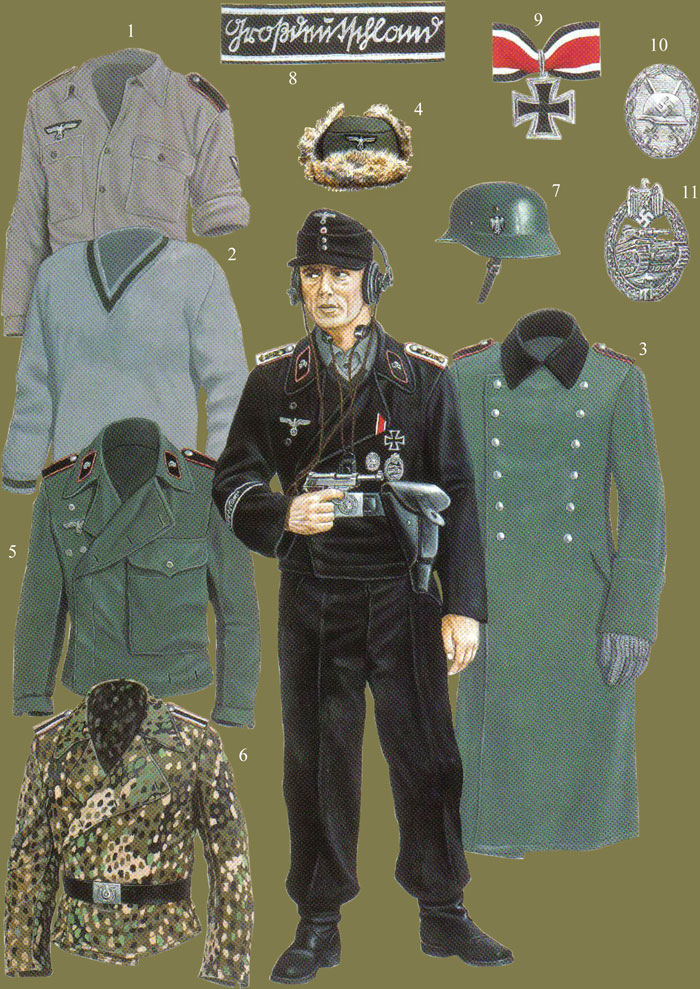 The boots and trousers remain the same as those worn by the trooper in Plate A, but the Panzer jacket has now lost its rose pink collar trim. The early Panzer beret has now been replaced by the universal M1943 Einheitsfeldmütze, which was intended to replace all existing forms of headgear though this was never fully achieved. It is interesting to note that the peak on this form of headdress hindered the use of binocular sighting mechanisms inside the tank, so it was often worn back to front when inside the vehicle.

This combat-hardened feldwebel of the German Army's premier elite unit wears the divisional cuffband on his right sleeve, and the monogram 'GD' on his shoulder straps. His tunic is adorned with the Iron Cross and Panzer Assault Badge as well as the Wound Badge in silver, denoting that he had been wounded in action at least three times.

G1 A mouse grey wool shirt was issued for wear under the black jacket. It was often fitted with insignia and shoulder straps for wearing when in shirtsleeve order during summer months.

G2 A wool sweater was Issued to all German Army personnel and was often worn under the jacket in cooler weather. It was knitted in grey with dark green bands around the sleeves and v-neck collar.

G3 The greatcoat. Often worn by tank crews in the early part of the war before specific cold-weather clothing was introduced, there was no special black version for tank troops, the standard field grey issue was universally used.

G4 In cold weather, unit tailors would often convert existing field caps by adding fur trim to the drop-down ear flaps of the M1943 style cap. The type of cap shown here can be found in many wartime shots of Grossdeutschland personnel and seems to have been very popular within that unit.

G5 As the war progressed, it became clear that the black jacket provided insufficient warmth in winter, while it made working in the confines of a tank in hot weather most uncomfortable too. A clone of the tank uniform was produced in lightweight, reed green denim for summer wear. This jacket, which had a large breast pocket, was worn either in combination with its matching denim trousers, with the original black wool trousers, or even with army issue shorts

G6 The Waffen-SS made widespread use of camouflaged clothing, including for its armoured troops. The army also had a special camouflaged version of the Panzer jacket made in its own 'splinter' pattern material, though it was not widely issued. Both camouflage versions are shown here. Note that the SS cut has a vertical front-fastening and has relatively small lapels, whereas the army version has a slanted cut and much larger lapels.

G7 The standard army steel helmet was also issued to tank crews. Due to its cumbersome nature it was usually kept in the tank's stowage box, or hung from a hook on the tank's exterior.

G9 The Knights Cross of the Iron Cross. 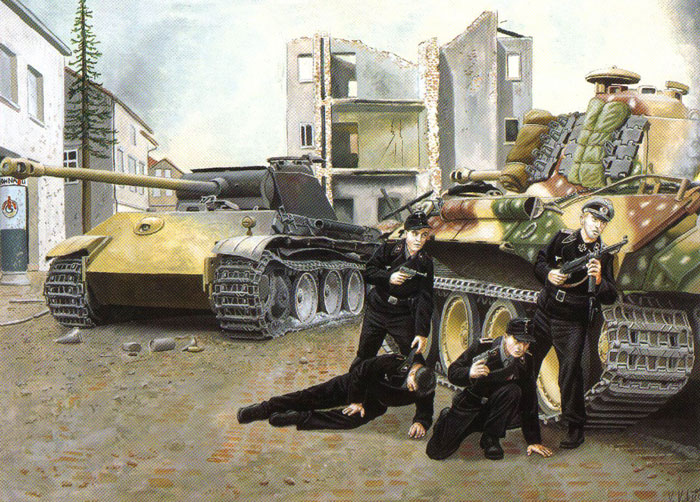 By the closing stages of the war, the German armed forces had some of the finest medium and heavy tanks ever to have entered service. However, no matter how good their weapons, and despite the gallantry and fortitude of individual Panzer crewmen, nothing could offset the huge losses that were being suffered, the lack of adequate fuel supply, the overwhelming Allied superiority in numbers, and most of all the Allies' total air domination.

As soon as the presence of German tanks was suspected, the Allies could call up massive artillery and air strikes, while simultaneously throwing in so many of their own tanks that they overwhelmed the superior quality fighting vehicles of their opponents. The German vehicles could then be outflanked and a shell put through their thinner side or rear armour.

Here we see two Panther tanks, which have been caught in a joint Allied air and artillery strike. One tank has received a direct hit and been totally destroyed by the fire that ensued. Flames have blackened the hulk, which is still smouldering. The rubber tyres, with which the road wheels are shod, have turned to ash because of the intense heat, which has also caused the suspension to collapse. The crew would have had no chance to escape and would have been incinerated with their vehicle.

The second vehicle, hit whilst passing one of its more unfortunate counterparts struck in an earlier action, has not been instantly destroyed but a hit in the engine compartment has started a fire. In this case, the driver has been hit and killed whilst exiting his hatch, but the remainder of the crew have escaped the stricken vehicle and are pinned down by enemy small-arms fire. Their fate is most likely already sealed. If they remain in the cover of their Panther the heat of the fire will eventually cook off the ammunition causing the tank to explode. If they move they will be cut down by enemy small-arms fire.

So great was the fear and hatred in which enemy tanks were held by infantrymen that crews escaping from stricken vehicles were rarely given the opportunity to surrender, but were picked off immediately they attempted to emerge from the vehicle.

By this stage in the war, most of the once mighty Panzer Divisions were mere shadows of their former selves. Even the mighty Leibstandarte was reduced to a mere 12 tanks at one point.