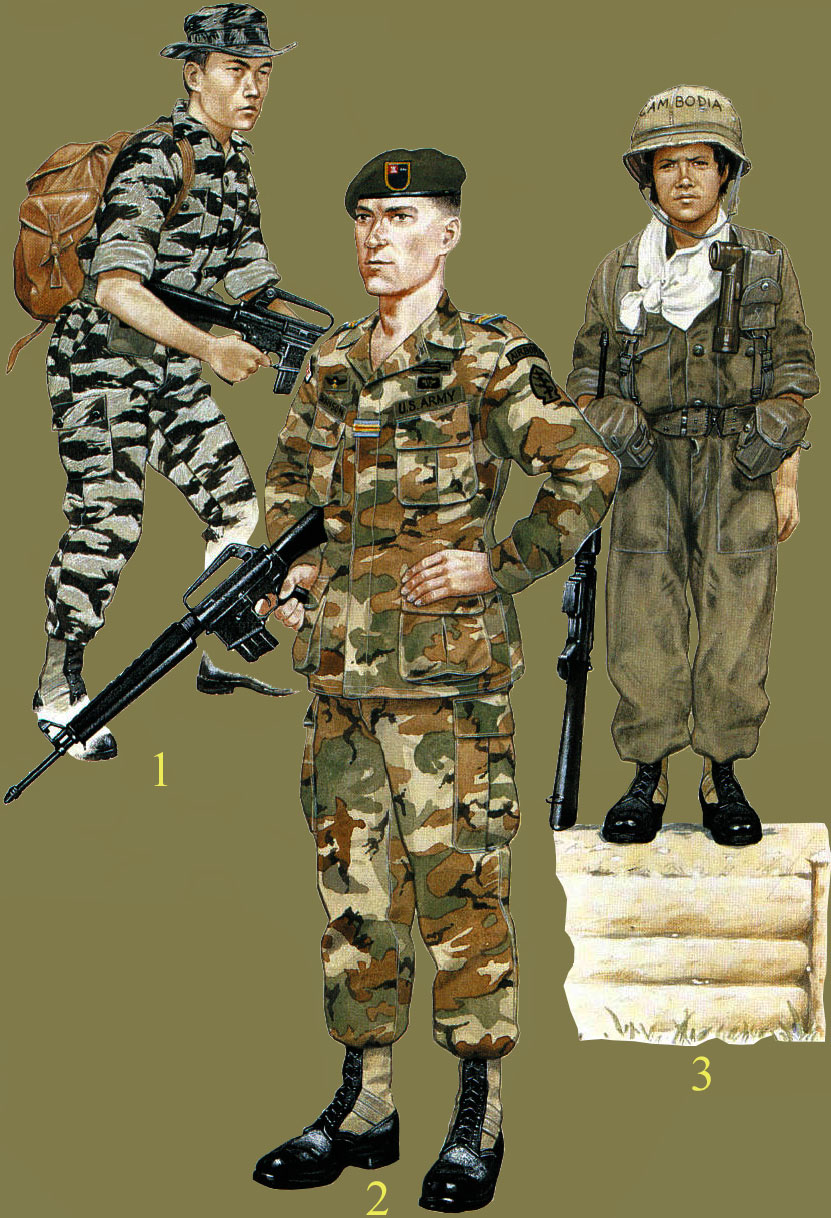 In 1970 the MACV Studies and Observation group recruited and trained several small teams of Cambodians as airborne commandos in Project 'Cedar Walk'. The teams were deployed in Communist-held regions of north-eastern Cambodia. When the Khmer Republic started to form a Special Forces unit, 20 'Cedar Walk' commandos were airlifted to Cambodia in October 1971 to act as a cadre; a second contingent arrived during the following month. On paper the 'Cedar Walk' operatives were assigned to the Young Khmer Special Forces; because of political pressure, however, they fell under the actual control of the Director of Cambodian Intelligence. As such, they were never properly employed in a conventional warfare capacity.

'Cedar Walk' commandos were equipped like most SOG-supported indigenous units. This commando's camouflage uniform consists of South Vietnamese tiger-stripes and a matching jungle hat; captured NVA uniforms were also worn. A three-pocket indigenous rucksack is worn, with an M1956 pistol belt. The rifle is an M16. Cedar Walk also had access to ComBloc weaponry while on missions into Cambodia. 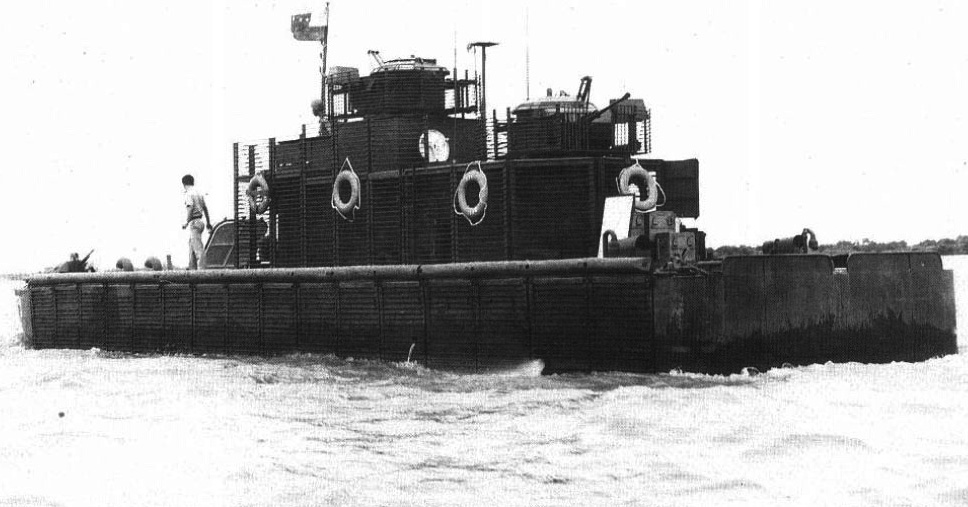 An MNK Monitor mounting a flamethrower patrols the Mekong; note the anti-rocket grating protecting the superstructure, a highly necessary precaution.

Like most UITG personnel, this lieutenant is a member of the US Army Special Forces; he wears a UITG flash, based on the Khmer Republican flag, on his green beret. In deference to his Cambodian students his rank is worn French-style on a chest tab and on FANK shoulder loops. A UITG 'Republique Khmere' title is worn on the upper right sleeve; frequently, a UITG battalion training camp insignia was worn underneath. A US Army Special Forces shoulder insignia and Airborne title are worn on the left shoulder. A CIB and US jump wings are over the left pocket, subdued ARVN Special Forces wings over the right.

A young Cambodian recruit at a UITG training base in South Vietnam. He has been issued with US OG 107 fatigues and M1956 LBE, which he will bring back to Cambodia on completion of training. His LBE supports universal pouches, a first aid pouch, a flashlight, a bayonet and a canteen. Because FANK units arrived in South Vietnam as organised battalions, they often came with brigade or battalion insignia already designed and worn on the left shoulder. His weapon is the M16. The UITG programme also equipped FANK battalions with M79 grenade launchers, Browning automatic rifles, .30 cal. machine guns and .50 cal. machine guns. 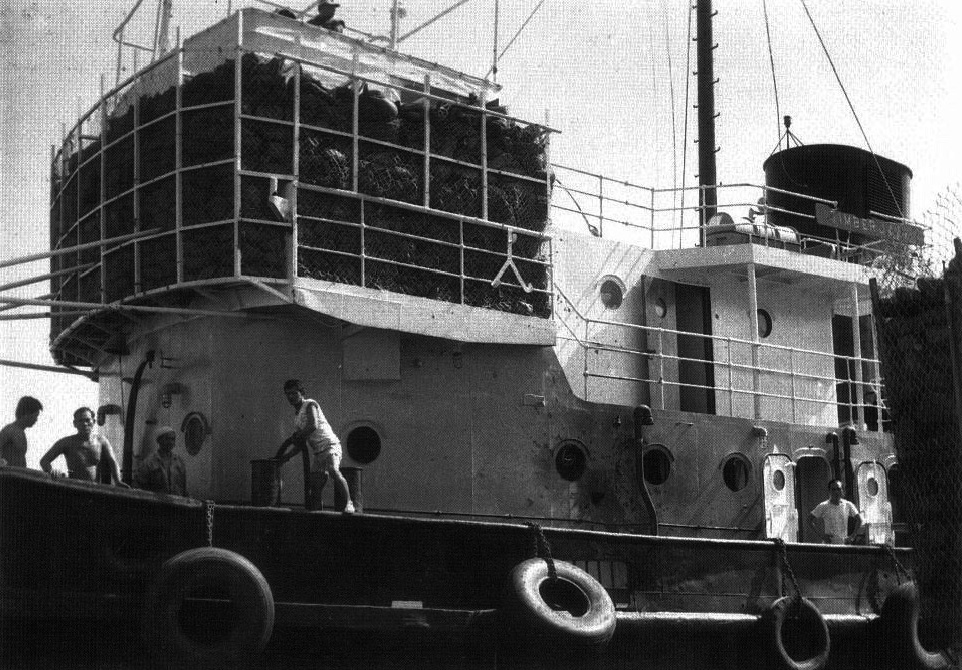 The MV Timberjack arrives in Phnom Penh in January 1975 - the last vessel to make the journey. Note the sand-bagged bridge, and RPG damage to the superstructure. 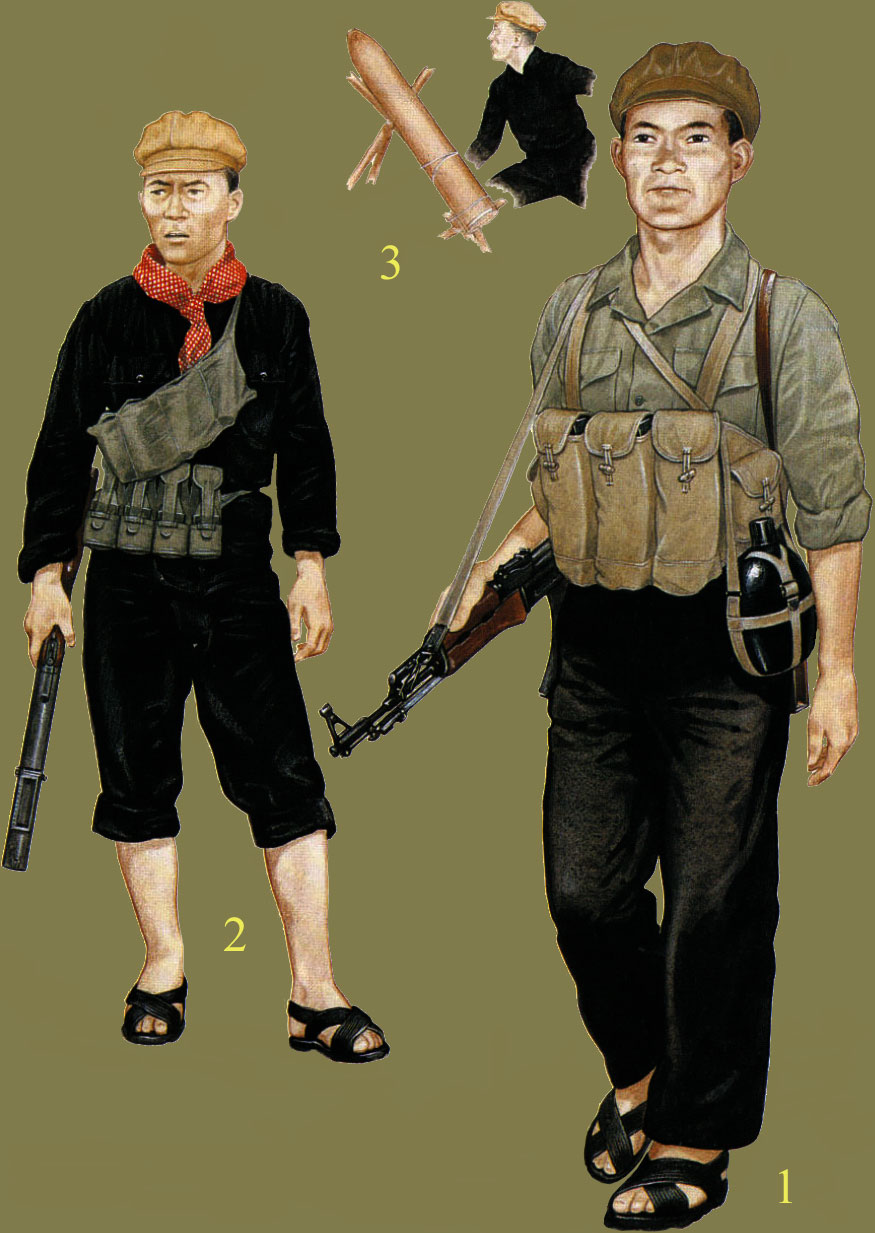 C1 : Khmer Rouge commander, 7975 A Khmer Rouge field commander advances on Phnom Penh during the final offensive against the FANK. By the final year of the war even the most puritanical Khmer Rouge had been forced to adopt items of clothing procured through the NVA. The khaki Mao cap and olive drab shirt were supplied through the North Vietnamese. The sandals and peasant pants, however, display an important sense of commitment to the spartan virtues of Khmer Rouge extremism. A ChiCom chest pouch carries four spare magazines for his AK-47 rifle. As with the Pathet Lao and Viet Cong, Khmer Rouge commanders wore no rank insignia but could be distinguished by the presence of coveted military equipment. This commander carries both a ChiCom leather map case and a canteen.

The uniform items and accoutrements displayed by the guerrilla hint at the various supply channels that were feeding rapidly-growing Cambodian Communist forces late in the war. His khaki Mao cap and black uniform have been procured through NVA channels. Over his shoulder is the locally- made grenade bandolier carrying rounds for his captured M79 launcher. Chinese-made stick grenades are carried in a locally-macle pouch. The sandals have been cut from a truck tyre. Around his neck is the krama, a traditional Cambodian scarf, alternatively worn around the forehead by the Khmer Rouge.

Dressed in locally-produced peasant pyjamas and a khaki Mao cap, he erects a makeshift 107mm rocket launcher out of cut branches. A more sophisticated two-shot launcher on a simple metal tripod was also used. Rocket accuracy was poor, but adequate for hitting sprawling cities like Phnom Penh. Weighing 19kg and with a range in excess of 8,000m, the 107mm rocket became the chosen projectile of the Khmer Rouge. Less frequently now, the Khmer Rouge still employ ChiCom 107mm rockets against the Vietnamese occupational forces in Cambodia. 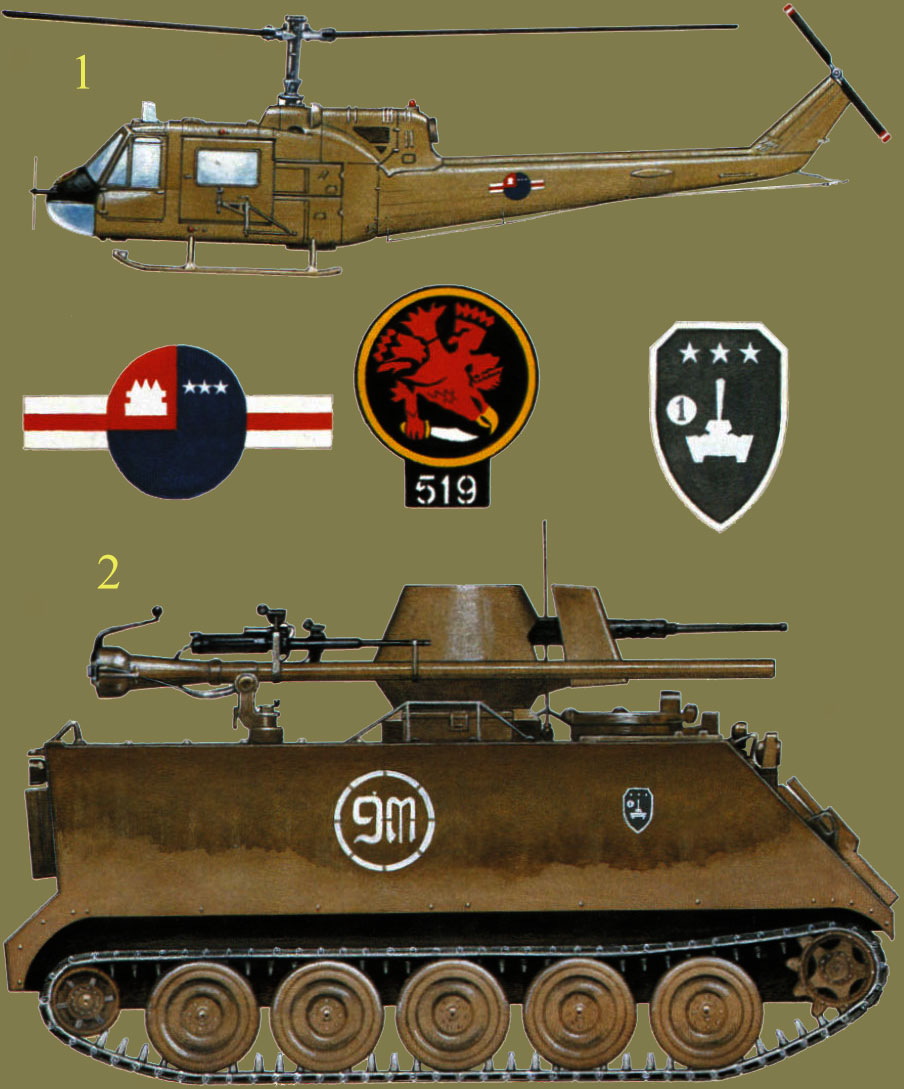 In May 1973 six UH-1 helicopter gunships were turned over to the KAF. Armament was an M60 machine gun on a side-swivel mount. In all ten gunships were delivered, being used extensively in the Mekong convoy support role. Cambodian helicopter gunships all had an eagle holding a dagger painted on the nose. A red-coloured eagle indicated helicopters stationed at Phnom Penh; those painted in orange were from Battambang.

The same design was worn as the unit insignia by crews. The KAF national insignia, inspired by US Air Force markings, is painted on the tail boom.

In 1970 the FARK armoured Demi-Brigade was composed of vintage M24 tanks, AM8 Armoured cars and M2 half-tracks modified into wheeled vehicles. The FANK increased armoured strength to a brigade during the following year, receiving a total of 202 M113 armoured personnel carriers, including 17 examples equipped with a 107mm mortar. In late 1972, M113 APC squadrons were formed in each of the four FANK divisions. Additional APCs were kept in the armoured cavalry headquarters in Phnom Penh, located in the former Olympic stadium.

This FANK M113 is equipped with a .50 cal. machine gun turret and a 106mm recoilless rifle, capable of firing a 9.8kg anti-personnel round over an effective range of 1,100 metres. The Cambodian numeral '13' and a FANK armoured brigade insignia, copied from the design used by the ARVN, are painted on the side.

KAF T-28 Trojan fighter-bombers taxi out at Pochentong Airbase outside Phnom Penh during the final months of the war. 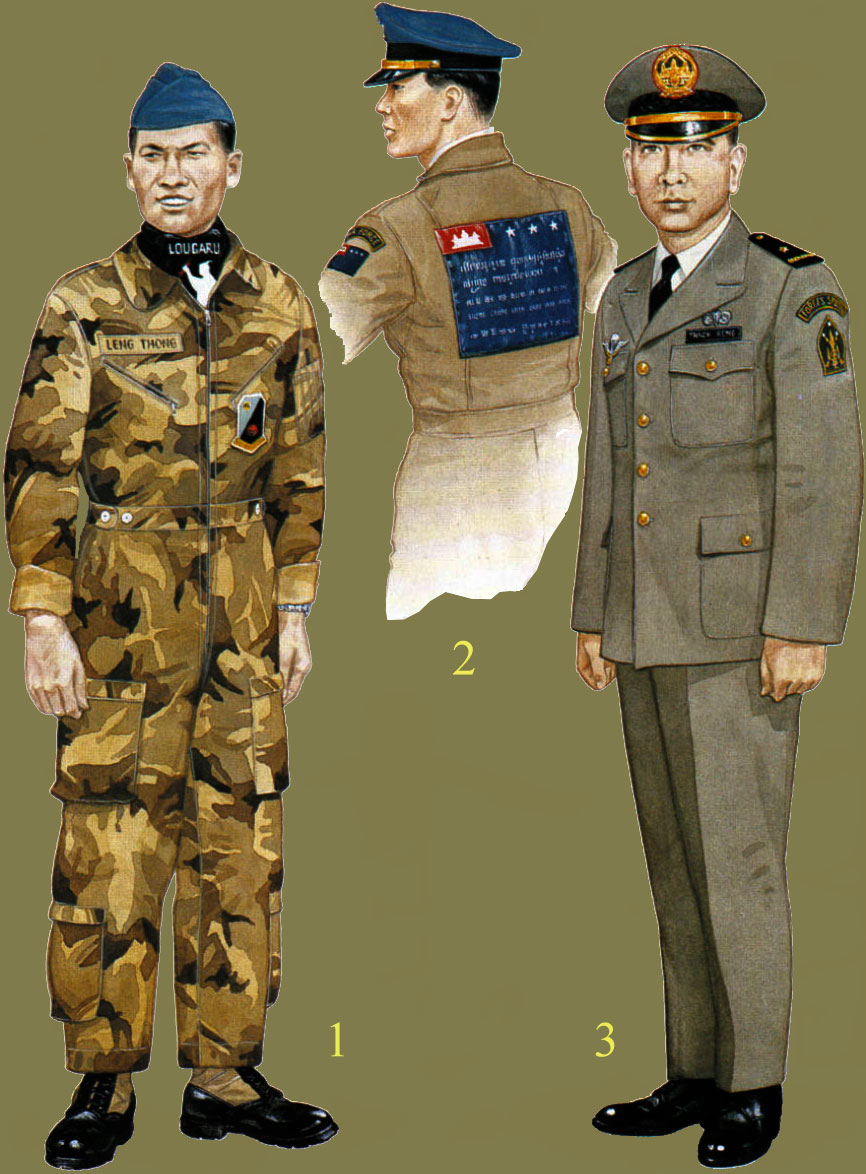 In May 1971 six KAF transport personnel were brought to Udorn Air Base, Thailand, for training in the AC-47 gunship. They returned to Phnom Penh in June with two gunships, employing them immediately in support of a government garrison 60km south-west of the capital. By 1973 the KAF was operating 12 gunships, using them primarily for Mekong convoy support and night operations.

This sergeant was the loadmaster in the original Udorn contingent in May 1971. He wears a Thai leaf-camouflage flight suit procured by the first crew on graduation. The black scarf around his neck is decorated with the 'Spooky' gunship ghost insignia ('Spooky' was the radio callsign for USAF, Laotian and South Vietnamese AC-47 gunships). The scarf also bears the word 'Lougaru', a corruption of the French word for werewolf, which was the KAF AC-47 callsign. The insignia over his left breast was designed and produced by the first KAF AC-47 crew; subsequent Cambodian AC-47 personnel wore a squadron insignia showing the garuda, a mythical seven-headed serpent. The blue overseas cap was standard in the KAF. Footwear is the US jungle boot. 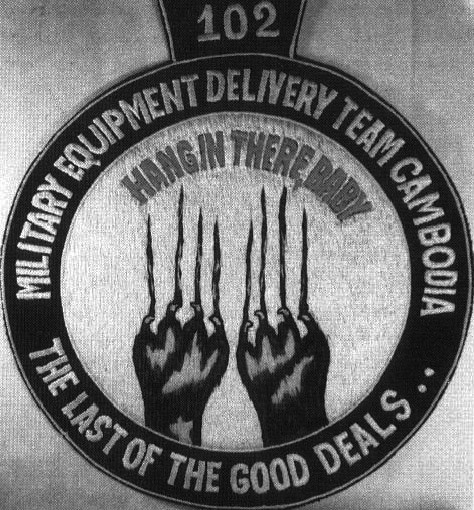 MEDTC 'novelty insignia' made up for personnel after the fall of the Khmer Republic. The '102' refers to the number of days the MEDTC stayed in Cambodia after the 1975 New Year offensive began.

In 1972 ten KAF T-28S were damaged or destroyed during combat operations, most due to mechanical failure or pilot error. At least one airman was believed captured by the Khmer insurgents.

Intimidated by these statistics, this KAF fighter- bomber pilot wears a 'blood-chit' based on the design of the Republican flag, reading, 'If you capture me, please treat me as a POW according to international agreements'. Since neither the NVA nor the Khmer Rouge were known to keep many Cambodian prisoners alive, such pleas were almost certainly in vain. It is also noteworthy that the Vietnamese translation in the middle contains several spelling errors. Translation in Khmer and Chinese are also included. A Khmer flag and KAF title are worn on the left shoulder of the pilot's US flight suit. He wears a blue peaked cap with silver KAF badge.

The commander of the Khmer Special Forces, Brig. Gen. Thach Reng, is seen wearing the olive green FANK dress uniform. The peaked cap has the gold FANK device depicting the Angkor Wat temple complex. Buttons bear the combined service emblem of the FANK General Headquarters. Brigadier-general's rank is displayed on black French-style shoulder boards. Special Forces insignia with a Forces Speciales tab is seen on the upper left sleeve. Metal Cambodian basic wings are worn on the upper right chest, and US basic wings, received after his training at Long Thanh, South Vietnam, on the left. 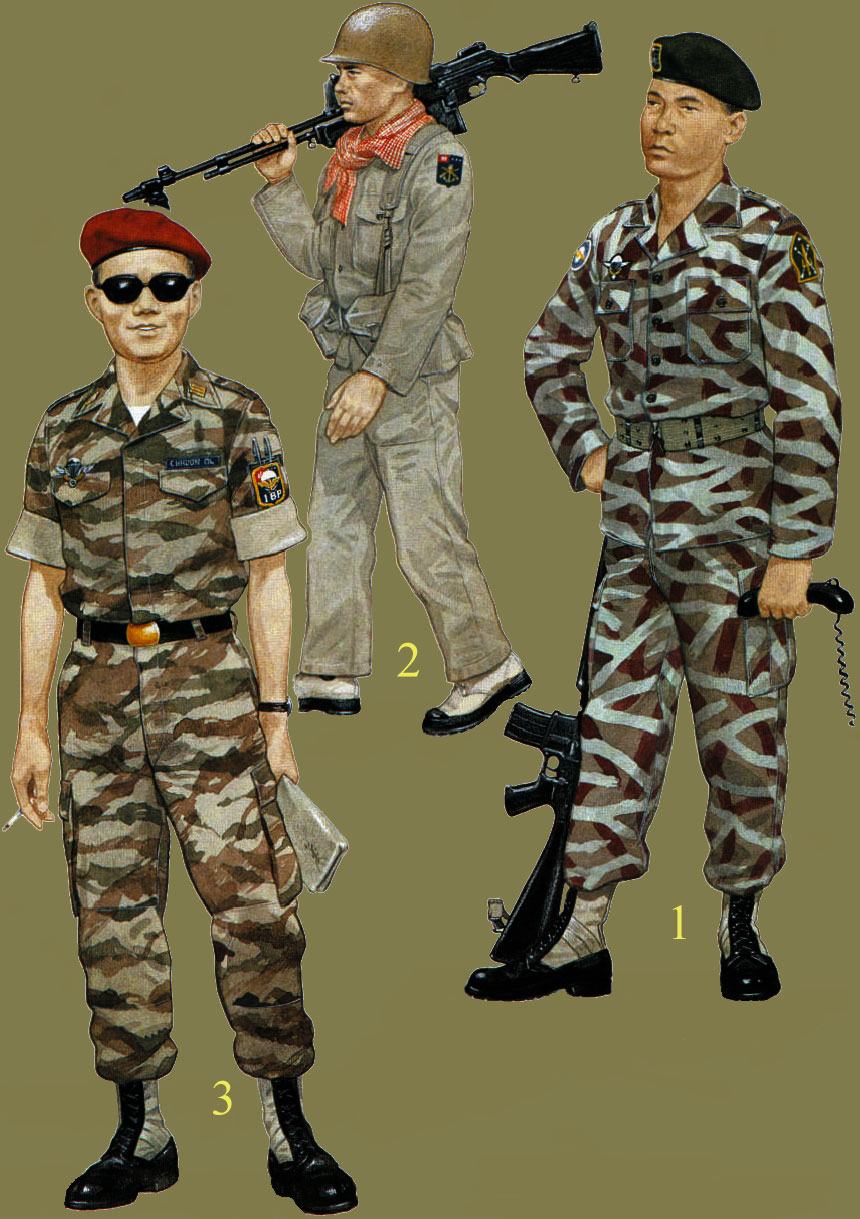 In early 1973 several FANK detachments were sent to Lopburi Special Warfare Centre, Thailand, for advanced ranger and communications training; the latter was needed to provide the Khmer Special Forces with radio operators for its small-unit operations behind enemy lines. Upon their return to Cambodia they saw heavy lighting at Kompong Cham in September 1973, helping the FANK successfully defend the city by calling in accurate aerial resupply drops.

This sergeant is wearing a new set of camouflage fatigues designed and issued specifically for the Khmer Special Forces trainees attending courses at Lopburi; while its colours appear bright, they quickly faded to a duller, more effective pattern. Cambodian para wings are worn over the right pocket. The insignia of his current unit, the Special Forces, is on the left shoulder; the insignia of the FANK Signal Corps, his original unit, is on the right shoulder. The green beret bears a handwoven SF flash.

The MNK Marine Corps remained a small static defence force during the first three years of the war. In 1973 the MNK was authorised to double its strength, including an expansion of the Marines to 11 battalions. BFM deployment paralleled the FANK, with the Marines fighting an interdiction force along most of the country's major waterways. By December 1973 one BFM was patrolling the coastline, four were providing harbour security and four were on operations along the Mekong corridor. Two additional battalions, composed of disbanded FANK territorial forces, were formed in 1974.

Two battalions of 1 Para Bde. were among the initial reinforcements sent to the besieged provincial capital of Kompong Cham on 21 August 1973. Fighting their way across the city, the paras turned back repeated Communist assaults until further FANK reinforcements could be landed along the Mekong waterfront behind Communist lines. The two forces linked up and drove the Communists out of Kompong Cham by 13 September. Two remaining para battalions were heliborne on to the airfield north of the city during the opening days of the siege, and withstood continuous enemy pressure until relieved by KAF security troops in mid- September.

This captain wears French-style camouflage uniform, usually limited to use by paratroop officers. His red beret bears no cap badge; FANK airborne units never created a cap badge, although a cloth version of the FANK national insignia (see Plate E3) or metal wings were used as such. On his left shoulder is the insignia for 1 Para Brigade. Above this are ballpoint pens always the symbol of authority in Indo-Chinese armed forces. On both collars are rank insignia, generally adopted after 1972.