The NVA were the primary opponents of the Khmer Republic for the first two years of the war. They combined a conventional approach - using Main Force elements to crush the FANK in set- piece battles - with deep penetration commando attacks, like the devastating sapper raid on Pochentong Airbase in January 1971. By late 1971, believing the FANK to be broken, the NVA withdrew most of their Main Force elements from the heart of Cambodia and turned the fighting over to the FUNK. Some specialised units, such as sappers and rocket teams, remained; e.g. on 7 October 1972 a Vietnamese sapper force attempted to destroy the FANK APC park inside Phnom Penh. Other NVA maritime units began infiltrating ammunition along the Cambodian coast in April 1972. The NVA also remained prepared to defend their base areas along the lower Mekong corridor, as demonstrated by the August 1972 armoured counter-offensive which they launched against a FANK-ARVN thrust.

Notes: Based on FANK and allied intelligence sources compiled through early 1973

(1) B-3 Front was the command structure for NVA/VC elements in the Second Military Region of South Vietnam.

(4) A brigade-sized unit. Incorporated into the 5 NVA Division in September 1973 and moved to Tay Ninh, South Vietnam.

By December 1974 the NVA presence had been reduced to 26,200 men, of whom only 12,000 were combat troops. A chilling of relations with the Khmer Rouge, occasionally leading to open conflict, had in part prompted the steep decline in direct NVA participation. However, as late as the 1975 offensive on Phnom Penh, Pol Pot was to make note of NVA artillery support that contributed to the final victory.

Because NVA forces were well known to have operated in Cambodian sanctuaries for years, Hanoi made little effort to conceal the identity of NVA soldiers participating in direct fighting against the Khmer Republic. As a result, Vietnamese casualties encountered on the battlefield invariably wore the standard NVA uniforms and accoutrements seen in South Vietnam. 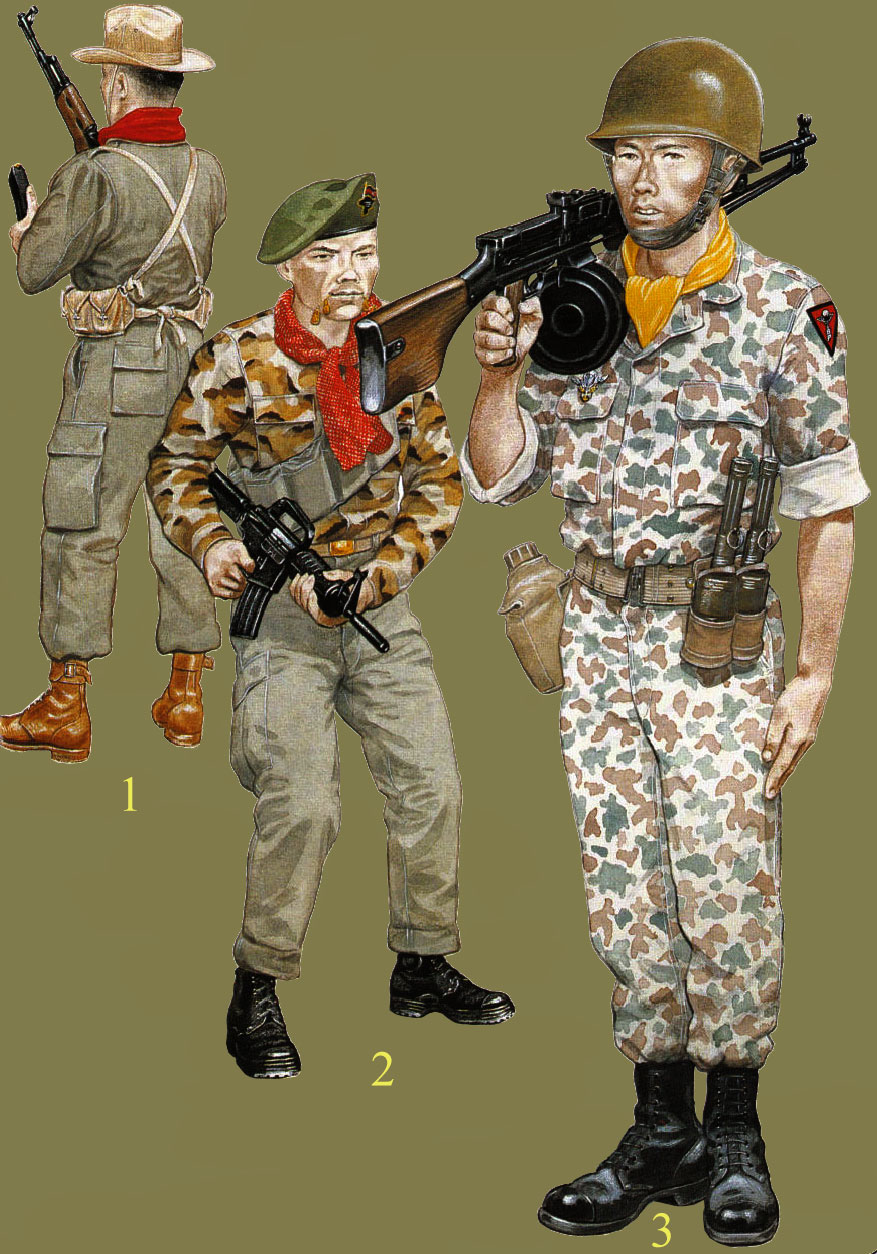 During the 1960s the FARK spent much of its time and resources repairing roads and building bridges as part of an extensive civic action programme. As a result, it had little combat experience when Prince Sihanouk sanctioned anti-Khmer Rouge and limited anti-Vietnamese operations in the late 1960s. The FARK had also become the recipient of a confusing array of Western and Eastern Bloc equipment after US military aid was terminated in 1964. This NCO wears French M1947 fatigues and US leather boots, common issue to lower FARK ranks by 1969. Bush hats were also widely used, including these large-brimmed French jungle hats. The weapon is an AK-47 assault rifle, supplied in substantial numbers both by the Eastern Bloc and China during the mid-1960s. Locally-produced canvas pouches are secured by shoulder straps and waist tapes.

The Khmer Serei (Free Khmer) were an anti- Communist resistance group led by the Cambodian nationalist Son Ngoc Thanh. Throughout the 1960s they waged a simmering struggle to topple the Sihanouk government. The Khmer Serei were also loosely aligned with the Khmer Kampuchea Krom, a Cambodian faction attempting to gain autonomy for the Khmer Krom people living in South Vietnam's Mekong Delta. Members of both organisations fought on occasion in unconventional warfare units run by the US Army Special Forces.

The Khmer Serei operated from two staging bases: one in the Dongrek Mountains along the Thai border, and one in South Vietnam's IV Corps. This guerrilla operates from South Vietnam, as evidenced by the identifying red scarf (krama) he wears around his neck: Dongrek Khmer Serei wore yellow and blue scarfs. On his green beret he wears a metal badge borrowed from the Khmer Kampuchea Krom, depicting a Cambodian flag over an outline of the ARVN IV Corps - a subtle hint at their ultimate goals of autonomy. The Khmer Serei never developed insignia of their own.

Because the Khmer Serei supported autonomy for the ethnic Khmer living in the Mekong Delta, they could not count on assistance from the South Vietnamese government. Commonly worn were camouflage uniforms from the South Vietnamese Police Field Force (a Saigon ruling prohibiting the sale of camouflage to non-military Cambodian personnel excluded the Field Force uniform, making it more readily available to the Khmer Serei). Footwear is a black-dyed pair of Bata boots. Accoutrements used by the Khmer Serei rarely amounted to more than simple bandoliers, acquired through sympathetic ARVN channels. The weapon is a CAR-15 carbine; US weapons were used while operating out of South Vietnam to prevent their being mistaken for Communist insurgents. The Khmer Serei staging out of the Dongrek Mountains used the AK-47, a more practical weapon that allowed them to use captured FARK ammunition.

The Buddhist amulets hanging from a gold chain were typical of the Khmer Serei. To protect tin guerrilla during an attack, the centre amulet was put in the mouth.

A MEDTC officer visits the 1st Parachute Brigade during operations along the Bassac River, November 1974. He wears subdued Cambodian parachute wings over his right pocket. The paratrooper at left wears the red beret with the standard FANK beret badge.

The Airborne Half-Brigade, composed of the 1 and 2 Bataillons de Parachutistes, had the most combat experience of any Cambodian unit before 1970, seeing action in the initial anti-Khmer Rouge campaign of 1967 and the sweeps of Ratanakiri Province in November 1969. After March 1970 the two existing airborne battalions formed the core for an envisaged brigade group totalling eight battalions. Only seven battalions had actually been fielded when a FANK reorganisation in February 1973 cut the paras back to a single brigade of four battalions. While overrated during the first years of the war, the paras had become by late 1974 one of the most effective FANK brigades. They were used extensively in the infantry role. Except for a single battalion-sized parachute drop along the Thai border in 1964 - intended to intimidate the Thai government the Cambodian paratroopers are not thought to have made a combat jump.

In January 1971 President Lon Nol presided over the presentation of the Standard of Victory to three brigades, including 1 Para Bde. This private, taken from a photo of that date, wears the spotted camouflage uniform issued only to Cambodian airborne NCOs. He wears an M1945 pistol belt, delivered before the US MAAG was withdrawn in January 1964; hanging from the belt are US- produced canteen and ChiCom anti-tank grenades in a locally-produced pouch. On his shoulder is the early insignia lor the 1 Bataillon de Parachutistes, replaced in 1971 by a new system of airborne insignia featuring an eagle and parachute on a Khmer flag (sec Plate F3). The weapon is a Chinese Type 56 light machine gun, a copy of the Soviet RPD. 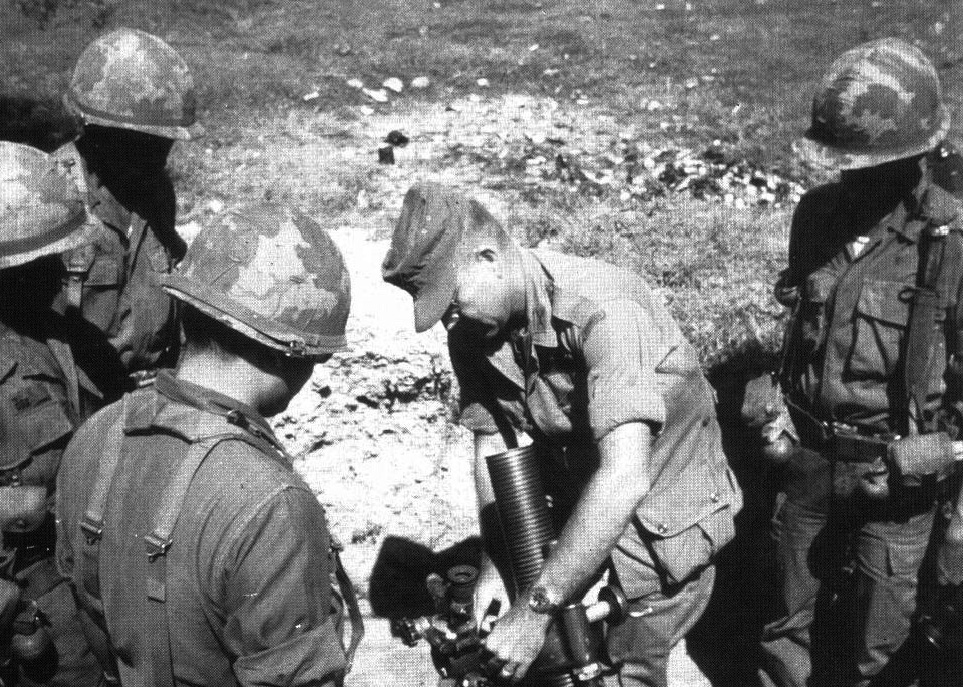