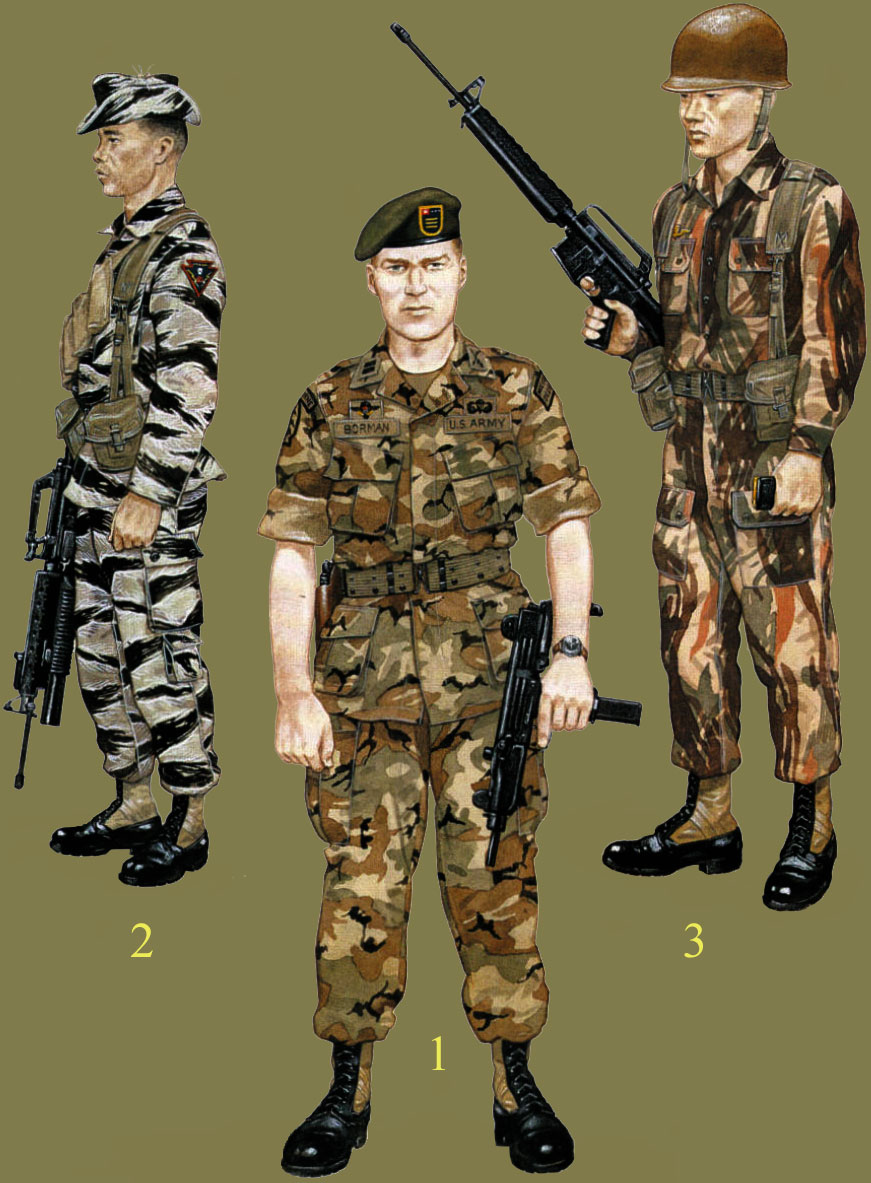 To observe equipment utilisation and FANK unit performance, MEDTC personnel were assigned to work with specific FANK, MNK and KAF formations. The branch orientation of a MEDTC team member was often matched to a Cambodian counterpart: this MEDTC captain, a member of the US Army Special Forces, is assigned to the Khmer Special Forces and 1 Airborne Brigade. His leaf camouflage uniform is of South Vietnamese origin, having been purchased on a previous tour. He wears subdued Khmer instructor wings, awarded at the Airborne Training Centre at Pochentong Airbase, over the right shirt pocket; subdued US Army Special Forces insignia, marking his previous unit in South Vietnam on the right shoulder; and a MEDTC title on the left shoulder. Cambodian-style rank insignia are embroidered on a Khmer Republic flash.

MEDTC personnel remained in the field for only short periods, during which times they were allowed to be lightly armed. This captain carries a privately-acquired UZI sub-machine gun and wears an M56 belt with a holstered Hi-Power Browning.

When the UITG was training FANK battalions in 1971 and 1972, reconnaissance platoons were occasionally sent for additional training. Further FANK reconnaissance units were trained in early 1972 at Phitsanulok, Thailand. Five hundred FANK trainees at Phitsanulok were put through a Commando Raider course; upon their return to Cambodia, they were divided into teams and assigned as pathfinders for infantry formations. In November 1972 a Recondo School was opened in Battambang Province to further expand the number of reconnaissance units available to the FANK. By 1974 most FANK brigades had a reconnaissance platoon, and each division had a recondo company.

Graduates from the FANK Recondo School were issued Cambodian tiger-stripe uniforms with matching bush hat. LBE is the standard FANK M1956 pattern. He carries an M203 rifle/grenade launcher combination - one of only 55 delivered to the FANK. On his shoulder is the insignia of the Recondo Company of the 2nd FANK Division. Instructors at the Recondo School wore a shoulder patch bearing an inverted black triangle with an eagle, copies from the emblem of the Royal Thai Army LRRP School.

Sixty FANK students attended training at the respected Airborne Commando School at Batu Djadjar, Indonesia in mid-1972. After a six-month course two dozen Muslim members of the contingent were posted to the FANK 5th Infantry Brigade, a predominantly Muslim formation; the remainder formed a ceremonial unit in Phnom Penh until 1974. They were then used as the cadre for a new Para-Commando battalion loosely assigned to the Khmer Special Forces, and sent to fight on the northern perimeter of Phnom Penh.

The commandos trained at Batu Djadjar were completely outfitted by the Indonesians before returning to Cambodia; this para-commando retains his Indonesian camouflage uniform and jump-wings. An M1 steel helmet is worn; a red beret, standard among all Cambodian airborne battalions, was also issued to the para commandos. The M16 rifle, M1956 LBE and jungle boots are FANK issue. 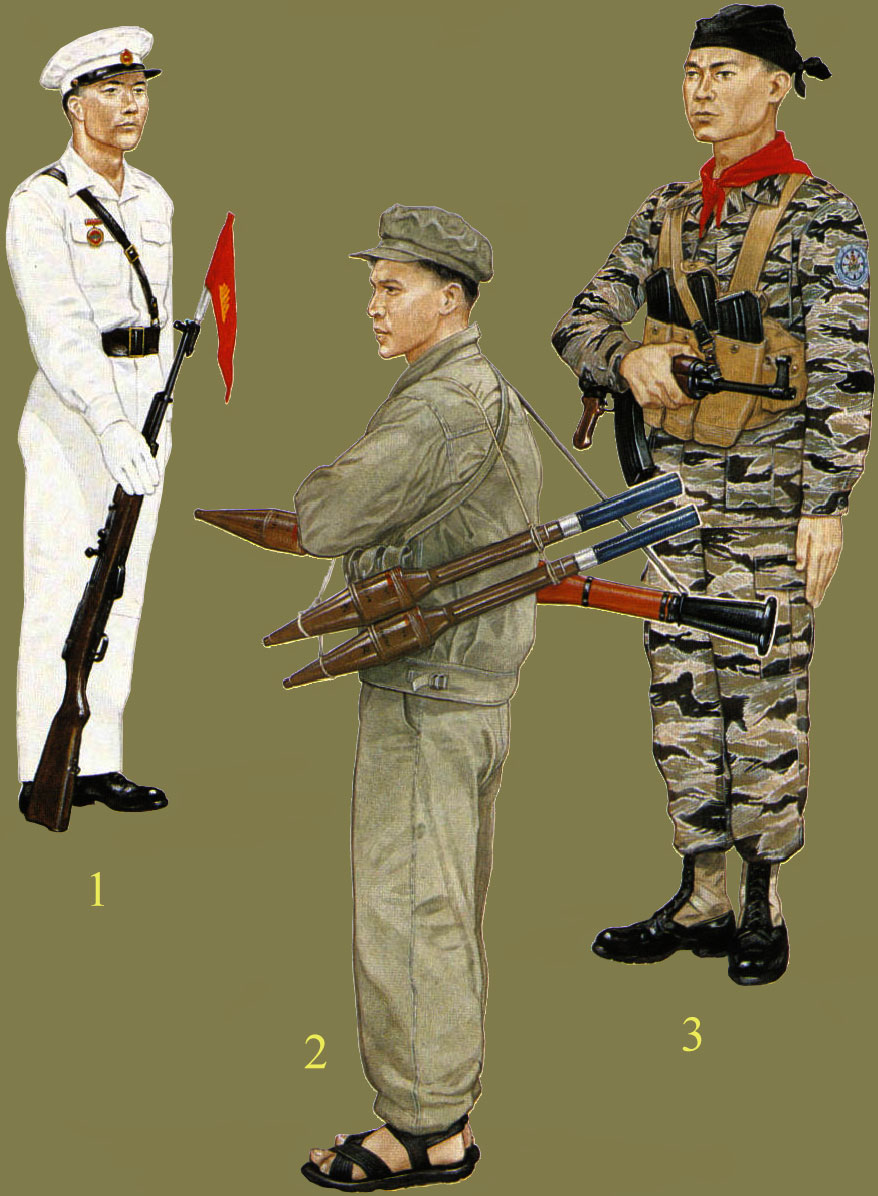 Sixteen days after Vietnam invaded Cambodia in December 1978 a proxy government called the People's Republic of Kampuchea was installed in Phnom Penh. The PRK Armed Forces have been slowly built up by the Vietnamese, but are rated as only marginally reliable. PRKAF defections to the resistence forces are frequent, and, until 1988, no PRK units operated in contested border regions without their Vietnamese equivalent alongside. In 1988 the PRKAF was estimated at 35,000 troops, including five infantry divisions used primarily for static defence.

Pictured during a 1980 parade in Phnom Penh, this member of the PRK Honour Guard wears a white dress uniform and peaked cap with metal PRKAF badge. A medal honouring the Khmer forces which helped defeat the Khmer Rouge in 1978 is worn on the right chest. The rifle is a Soviet SKS carbine, with a PRK flag sticking from the barrel. In the field, PRK forces wear Vietnamese- style olive drab or khaki fatigues. Headgear is usually an olive drab Mao cap or khaki field cap. Accoutrements are of Vietnamese origin.

After the Vietnamese invasion in late 1978, the Khmer Rouge withdrew toward the Thai border in an orderly fashion and created a guerrilla staging area based in the Cardamon Mountains. In 1987 they maintained an estimated 35,000 guerrillas organised into regiments and light divisions. Funding comes primarily from the People's Republic of China.

The Khmer Rouge now claim to have tempered their extremist ideology, which resulted in the deaths of perhaps two million Cambodians while they were in power from 1975 to 1978. As 'proof' of their new moderate outlook, Khmer Rouge regulars have now exchanged their spartan black pyjamas for green fatigues shipped directly from China. No branch or rank insignia are worn. Aside from a metal cap badge designed for a Khmer Rouge Honour Guard in 1985, no other Khmer Rouge unit insignia exist. The weapon is an RPG-7. His sandals are made at Site 8, the Khmer Rougerun refugee camp on the Thai-Cambodian border.

In October 1979, 1,500 anti-Communist resistance fighters along the Cambodian border unified under the banner of the Khmer People's National Liberation Front. Three years later the movement joined the UN-recognised Coalition government of Democratic Kampuchea, an anti-Vietnamese resistance umbrella organisation which includes the Khmer Rouge and forces loyal to Prince Sihanouk (the National Sihanoukist Army, or ANS). The KPNLF peaked in strength in 1983, when its 12,000 armed combatants successfully defended their border enclaves from a Vietnamese dry season attack. The following year the Vietnamese returned in greater strength, driving all three of the resistance factions across the Thai border. Since that time the KPNLF has tried to regain momentum by fielding small commando units in the border provinces.

While the KPNLF receives non-lethal assistance from the USA, China and the Association of South East Asian Nations (ASEAN), military assistance comes primarily from China and captured sources. This guerrilla wears Thai tiger-stripes and jungle boots. Other uniforms include civilian peasant clothes, green fatigues and Thai leaf-camouflage. His weapon is the ChiCom Type 56 rifle with folding stock, the most common firearm in the resistance coalition. The AK-47 chest pouch is also of Chinese origin. On his left shoulder is the KPNLF emblem. Individual KPNLF battalion insignia are worn on the left shoulder or on baseball-type caps. A black scarf has been adopted as headgear. 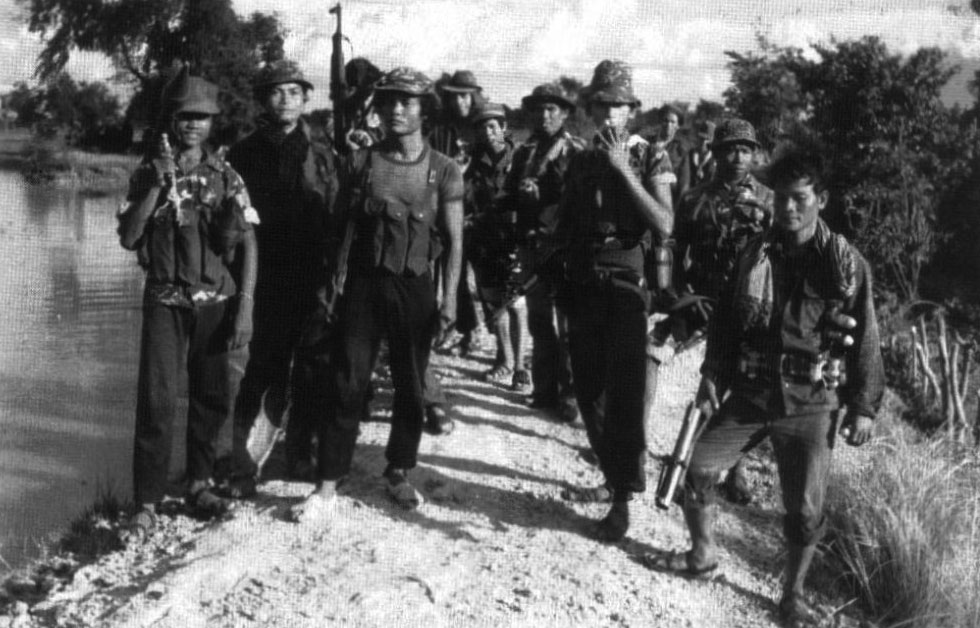 KPNLF guerrillas in Stem Reap Province, 1984. They are armed with AK-47s, RPGs and an M79. Clothing is a random mixture of various camouflage and olive drab items with civilian garments.