As with the Germans, the Americans enthusiastically embraced the building of a vast number of self-propelled guns and howitzers, but many models never proceeded further than the prototype stage, being built cither as 'one-offs' or in just sufficient quantity for thorough testing, but then never entering service. An approximate count of 'T' & 'M' numbered Gun Motor Carriages, Howitzer Motor Carriages, Multiple Gun Motor Carriages, Mortar Motor Carriages, Rocket Projectors and flamethrowers, mounted on tracked, halftracked or wheeled chassis, adds up to well over two hundred different items, although of course a number of Ts did result in Ms. In my book on World War Two Tanks in this series I have mentioned some of the rocket projectors and flamethrowers, but that only reduces the list by around forty. Of necessity. I must limit our examination to the more important SPs amongst those of the first four types (Guns, Howitzers, Multiple Guns and Mortars) most of which saw operational service and were mounted on tank chassis.

Smallest of the tank mounted SPs was the Howitzer Motor Carriage (HMC) MS of 1942. This used the M5 light tank chassis on which was mounted a 75mm Pack howitzer, already successfully fitted on a M3 halftrack The first attempt had a large open-topped superstructure. with the howitzer mounted in the hull front, resembling the M7, but it lacked crew protection and was replaced by a much better designed open-topped turret which fitted on the existing tank's turret ring. Cadillac built a total of 1,778 M8s, between September 1942 and January 1944, which were widely used in both the European and Pacific theatres, by the headquarters companies of medium tank battalions. One major drawback was the small ammunition load carried - only forty-si[ rounds (compare with sixty-nine on the M7), so it was fitted with a towing hook to pull an ammunition trailer.

Although the HMC M37 was designed and built to replace the M7, only a few were produced before the war ended. It was based on the M24 Chaffee light tank and mounted a 105mm M4 howitzer. Not only did it mount a larger howitzer with better elevation, so that us range was greatly increased, but it was also able to carry ninety rounds of ammunition. Total build was eventually 316. 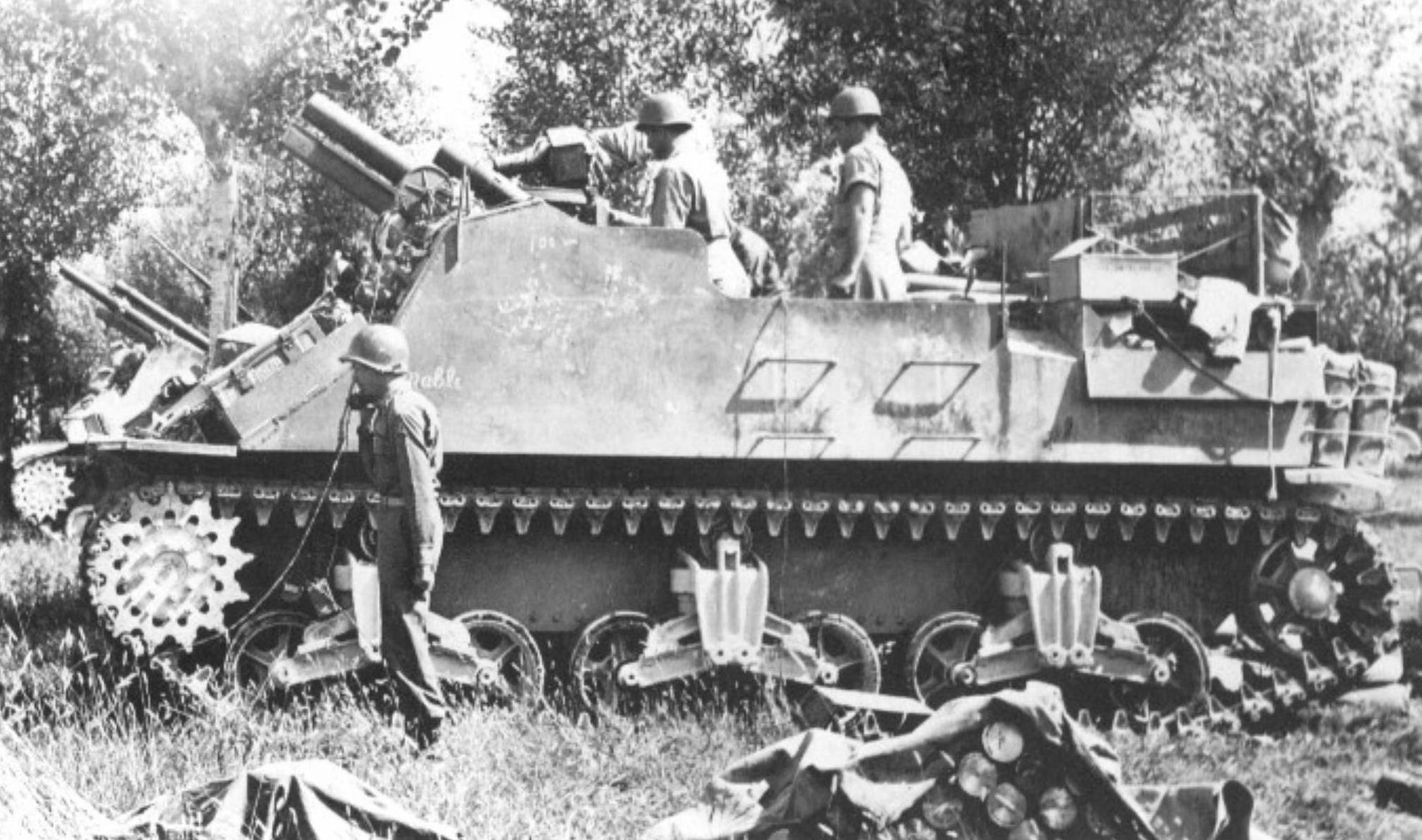 Standard equipment for all artillery battalions of American armored divisions. The M7 and M7B1, mounted a 105mm howitzer on M3 or M4A3 medium tank chassis. They were known as Priest in the British service. (TM) 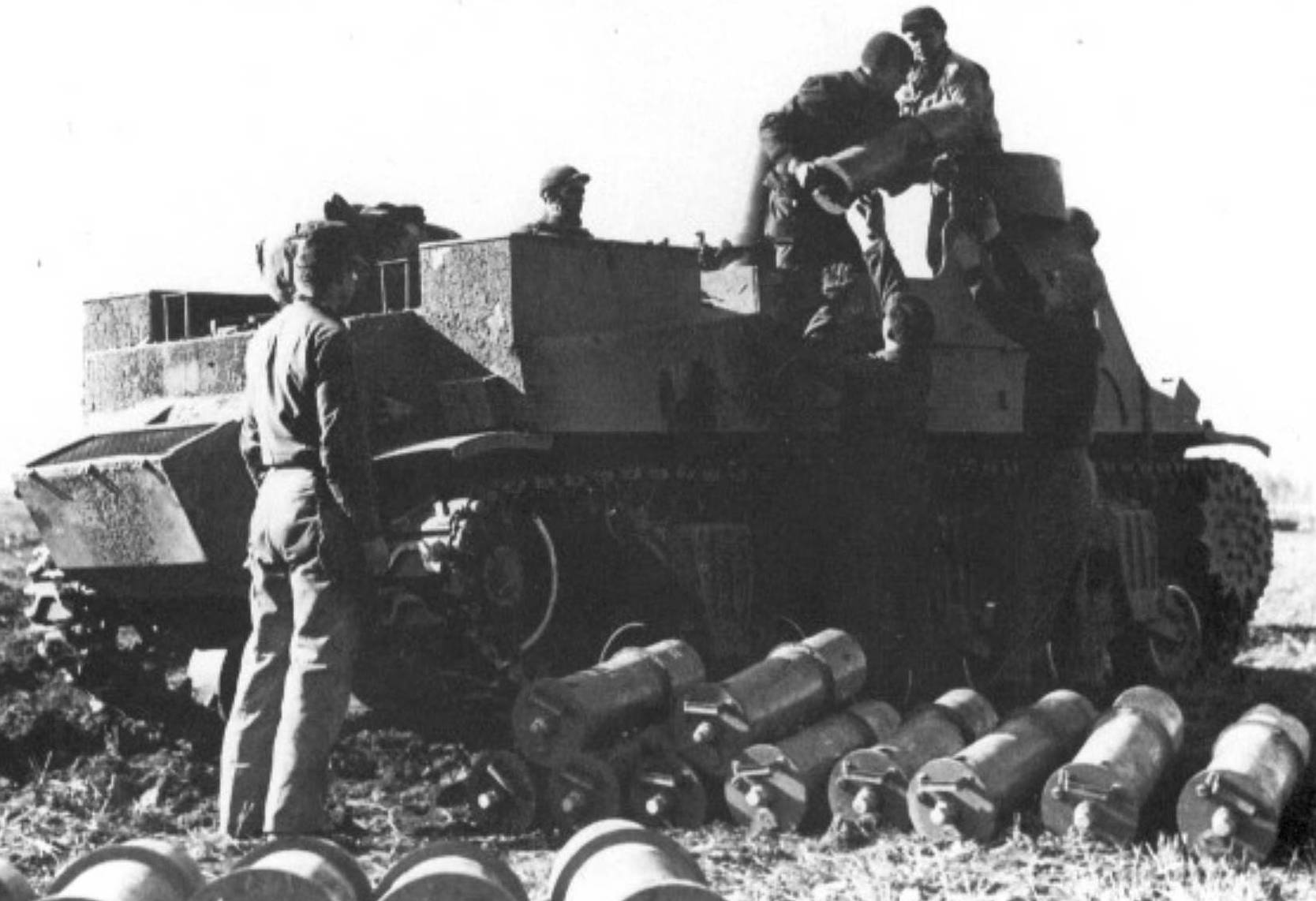 The 9.75 inch mortar version of the M7 - note the size of the phosphorus incendiary shells. (TM) 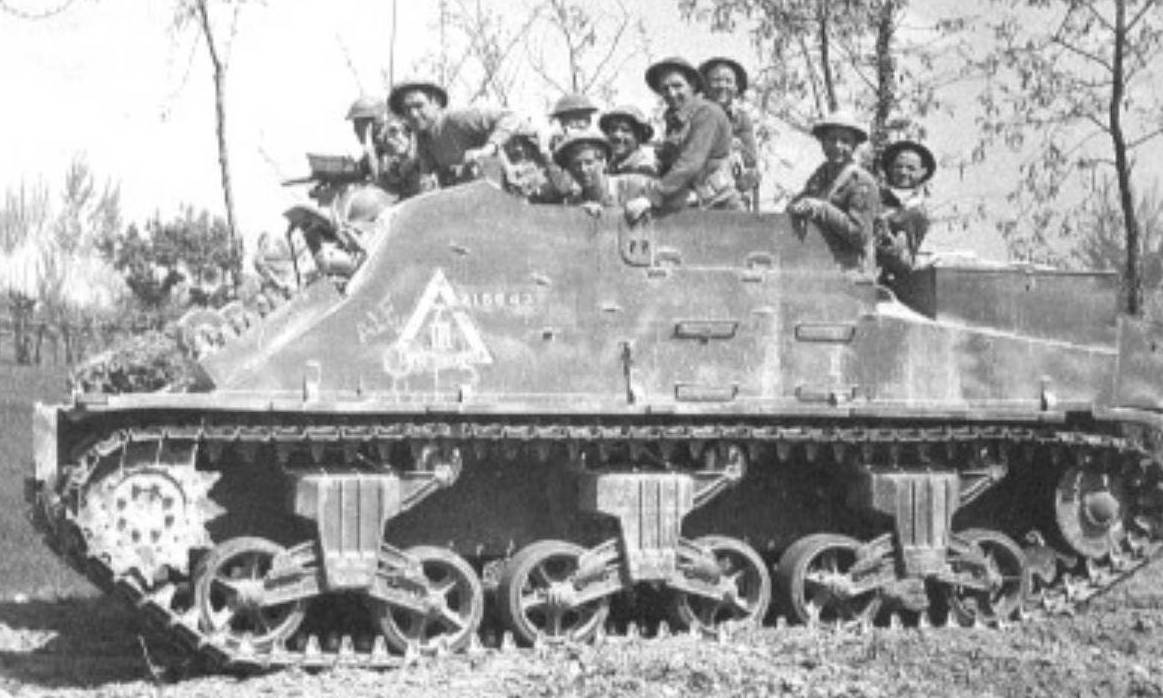 British adaptation of the M7 was the Priest Kangaroo armored personnel carrier (APC), which could carry up to twenty fully-equipped soldiers and two crew. (TM)

Plans to mount a 105mm howitzer on the M3 medium tank chassis began in mid-1941, in order to provide self-propelled artillery for the US Army's armored divisions. Two T32 pilot models were built, both mounted the 105mm M1A2 howitzer in an open-topped superstructure, which permitted only limited traverse (fifteen degrees left to thirty degrees right) and elevation from minus five degrees to plus thirty- five degrees. Secondary AA armament was a .50in heavy machine gun in the raised commander's station, known as the 'pulpit'. Standardised as the M7 HMC, over 2,000 were built by American Locomotive in 1942 and just over 3,000 in total were built by the end of the war (American Locomotive - 2,208: Pressed Steel - 826; Federal Walker - 127).

The HMC M7 was inspected by the British Tank Mission in early 1942 and a request was immediately placed for 2,500 with delivery by the end of 1942 plus a further 3,000 in 1943. Clearly supply could never meet demand, although ninety were sent to North Africa in the early autumn of 1942 for the British 8th Army, just as M3 light and M3 medium tanks had been sent earlier that year. The British designated M7 as the 105mm SP Priest, and they were later used to equip some of the mobile artillery units in British armored divisions deployed to Normandy in June 1944, but these were soon replaced by Canadian-built Sextons.

In 1943, production of the M4 Sherman took over from the M3, so the M7 was replaced by the M7B1 and M7B2. both based on the chassis of the M4A3, the M7B2 having a higher pulpit and other minor changes. Variants included:

PRIEST KANGAROO APC A total of 102 Priests were stripped-out by the British for use as APCs. These could carry twenty fully-equipped infantrymen as well as the two crewmen (commander and driver). All this work was carried out in the field by a number of different armored brigade workshops in Italy, between October 1944 and the end of the war. PRIEST OP. A Priest with the 105mm gun and other equipment removed to make room for all the extra radios, field telephones, cable drums and other items needed by FOOs (Forward Observation Officers).

Development of a 155mm SP gun on the M3 medium tank chassis was first suggested in June 1941, the pilot model - GMC 16 was produced in early 1942, tested and rejected. Ordnance, however, considered it to be superior to the towed 155mm gun and requested a build of fifty for further testing, but this was overruled by the Supply Department pending a full test by the Artillery Board, When this proved successful, Supply were overruled and the SP was designated GMC M12 and an order placed for 100 to be built. This build was completed in March 1943, but the vehicles were not issued operationally, but used instead for training in the United States until late 1943, when seventy-five were overhauled for use in the coming invasion. They were dispatched to the European. Theatre of Operations (ETO) in June 1944 and took part in several major actions which included the capture of Cologne in March 1945. One variant was produced the M30 cargo carrier, which was identical to the M12, but without the gun and recoil spade at the rear. It was used to carry extra gun crew and ammunition (forty rounds) as the SP only carried ten rounds. 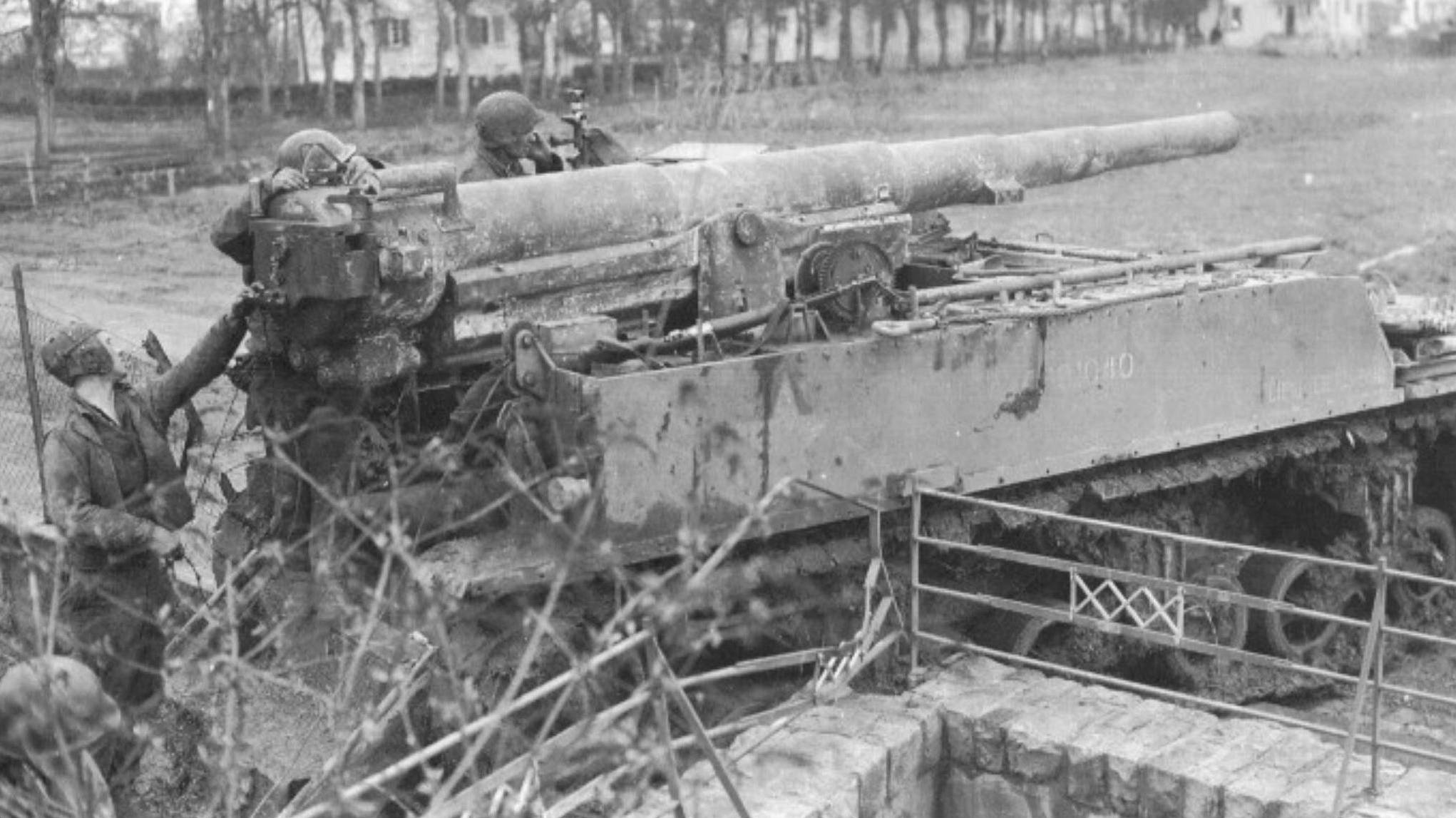 The decision to overhaul the GMC M12 and its subsequent success in action had raised a call from the Armored Force for more heavy, tracked artillery to be made available. This and other tactical decisions had led to work being undertaken on a series of vehicles to be known under the generic title of the 'medium weight combat team' and based on the Sherman M4A3 chassis. A new 155mm gun was projected for this series and work began on two pilots in March 1944, the designation being T83.

The M4A3E8 chassis, which was fitted with the latest Horizontal Volute Spring Suspension (HVSS) as opposed to the older Vertical Volute (VVSS), had to be strengthened and widened slightly. It was designed from the outset so that the mount would allow the 8-inch howitzer to be fitted in place of the 155mm gun. At the same time, a cargo carrier was designed on the same chassis (without gun and mount) to carry spare crew and extra ammunition. After the D-Day landings, a build of just over 300 of each was authorised and began in early 1945 at the Pressed Steel factory, Pittsburgh. Standardised as the GMC M40, it earned the nickname 'Long Torn', because of the length of the 155mm gun. The first two guns to arrive in Europe saw action in the bombardment of Cologne alongside GMC M 12s. The number required was raised to 600, but only just over half were completed by the time the war ended.

Building the 8-inch howitzer variant was also authorised in August 1944, the last few pilot T83s being fitted with this gun in place of the 155mm. However, it was not standardised as the HMC M 43 until after the war. There was also a proposal to mount a massive 250mm (10-inch) mortar on the same chassis and a mock-up of one was built being designated T94, but the war ended before this work was completed and the project was cancelled.

A 'heavyweight combat team' was also proposed in early 1945, to be based on the T26 Pershing tank chassis and two heavy bombardment artillery types were planned. It was decided that the two weapons to be used would be the 240mm howitzer and the 8-inch gun Pilot models were built by the Chrysler Corporation and designated as HMC T92 and GMC T93 respectively and both were ready for trials in 1945. It was decided to test them in battle and both were prepared for shipping to the Pacific for use in the invasion of Japan. However, the end of the war came and all orders were cancelled.

German Blitzkrieg success in 1940 and 1941 prompted the Americans to urgently look for a new way of knocking-out tanks. At the time n was not considered that a tank was the best antitank weapon, instead the War Department felt that the answer was tor a fast moving, highly mobile, very powerful new vehicle with the primary task of seeking out and destroying enemy tanks. This mobile anti tank gun theory gave rise directly to the formation of the Tank Destroyer Command and, unfortunately, also hindered the programme to produce a more powerful tank to replace the M4 Sherman. The name Tank Destroyer (TD) was deliberately chosen to emphasise the aggressive role of the new antitank units.

The TD Centre was set up on 1 December 1941 at Fort Meade, Maryland but was later moved to fort Hood. Texas in February 1942. By late 1942 the TD force was nearly 100,000 strong with eighty active units and a further sixty-four planned. Peak numbers were reached hi early 1943, when there were 106 active TD battalions - only thirteen less than the total number of tank battalions! From then on the size of the TD tone declined, principally because the enemy never used the massed armored formations against the Americans, as were seen on the Eastern Front. Also, serious casualties led to TD personnel having to be used as replacement tank crews, so that by March 1945 there were only sixty-eight TD battalions remaining. Nevertheless, they were courageous, capable fighters, fully living up to their motto: Seek, Strike ami Destroy.

The ideal weapon for the TD force had to be a choice between a towed anti-tank gun, or an SP, the eventual solution being a compromise, so that TD battalions contained equal numbers of each. There were three basic types of self propelled TD: M10 Wolverine, M18 Hellcat and M36. 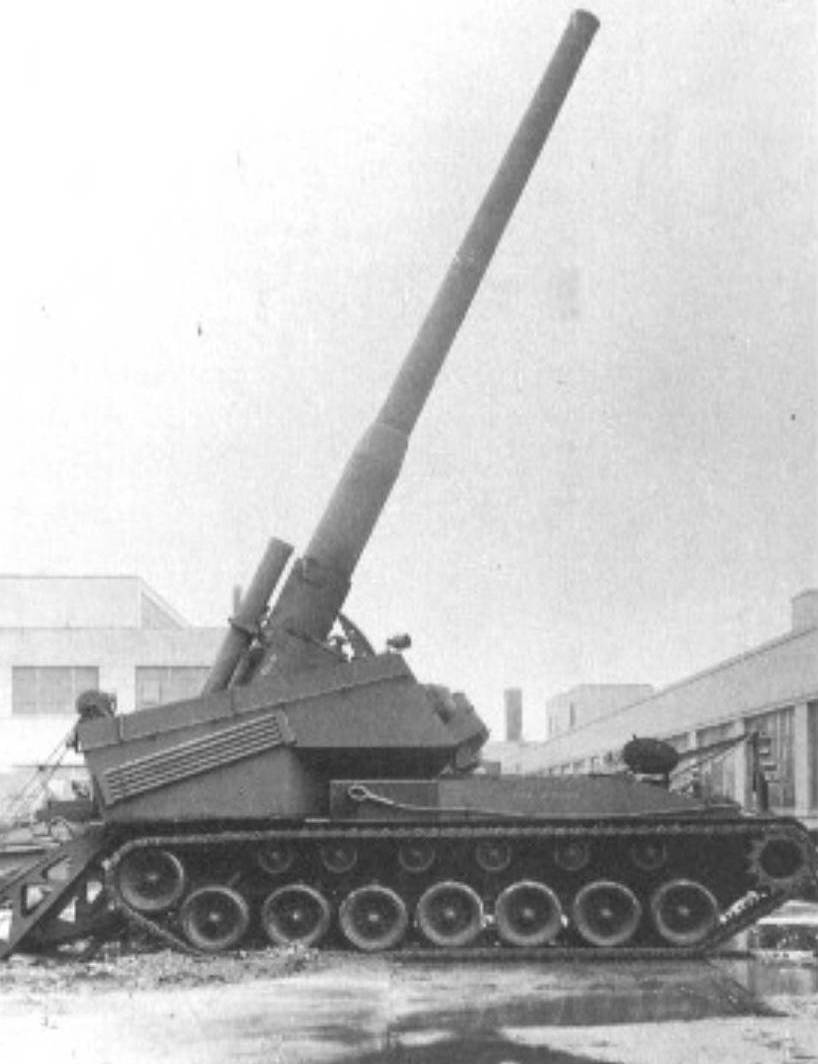 T93 GMC 8-inch gun was one of two prototypes built on the Pershing chassis. It was still on trials at the end of World War Two. (TM)