As explained, about the same time as Chevrolet were building Staghound the Ford Motor Company were, in 1942. designing and building the 6×4 Deerhound armored car, which was allocated the T17 designation. The 12.5 ton armored car had a welded hull and was 18ft long, 8ft 9ins wide and 7ft 10ins high. It was powered by two six-cylinder 110hp Hercules engines and carried a crew of five. Armament was a 37mm gun and co-ax machine gun in a M24A1 combination mount, fitted in a T-7 light tank turret, plus another ball-mounted .30in MG in the front of the hull. It was offered to Britain but they opted for the smaller Staghound. Eventually 250 Deer-hounds were built. 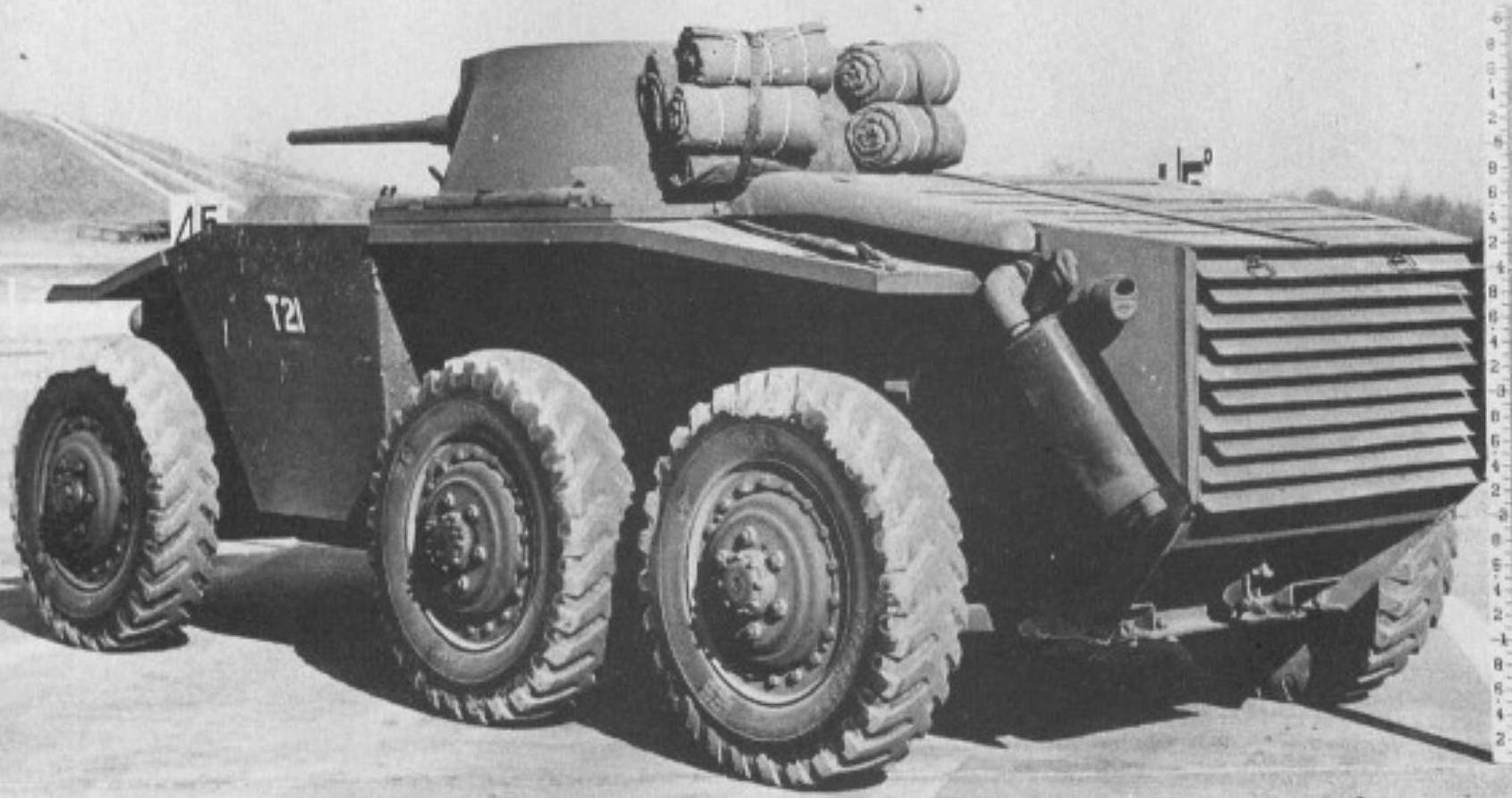 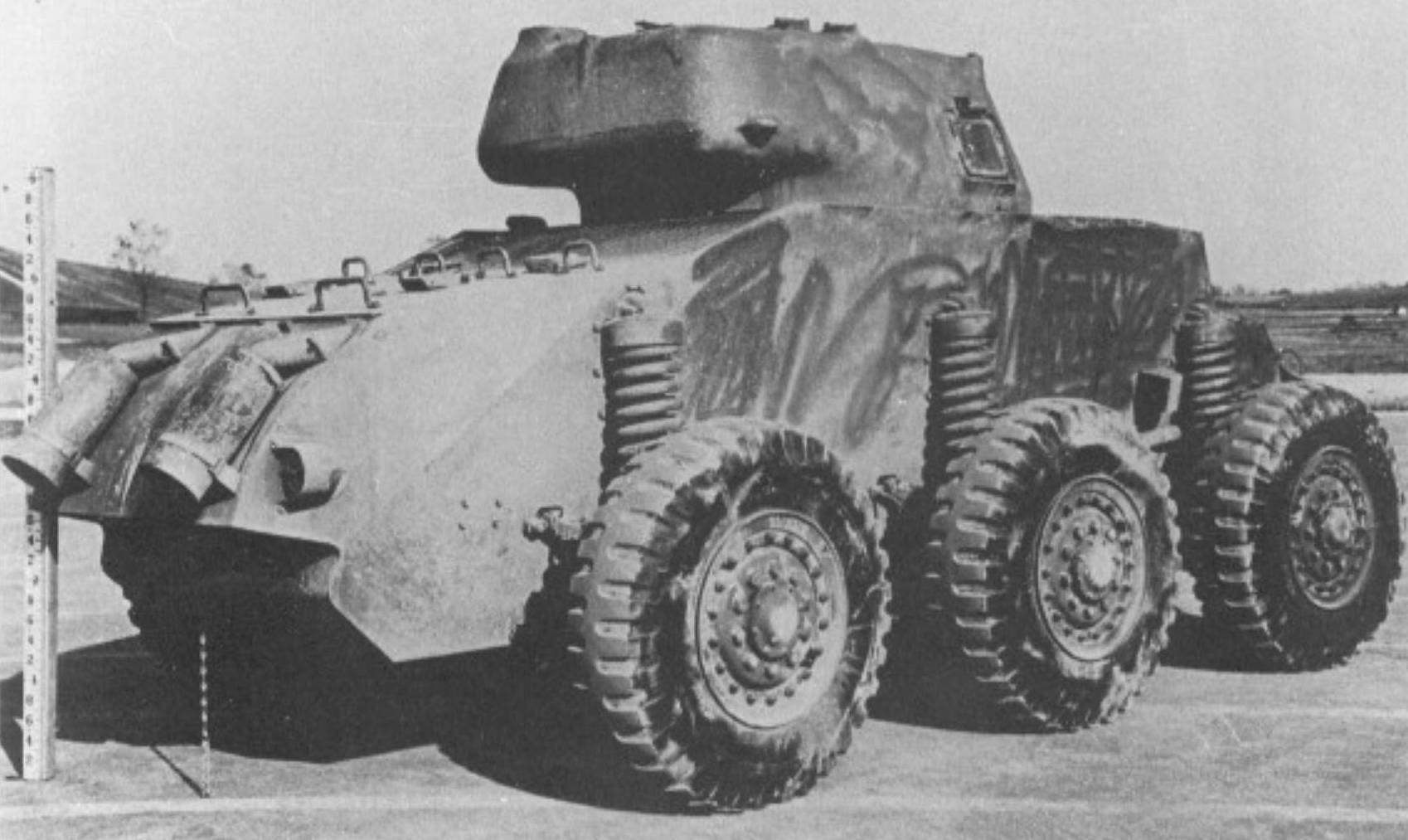 Another six wheeler was the T19, built by Chevrolet in 1942 which, like the T17 was fitted with the light tank turret. Weighing 12.5 tons, the T19, had six equally spaced axles mounted on large vertical coil springs. It was followed by the T19E1, which had a better mounting for the 37mm gun but weighed 1,000lbs more. Dimensions were 18ft 4ins long. 10ft wide and 8ft high. It was powered by two V8 260hp Cadillac engines. 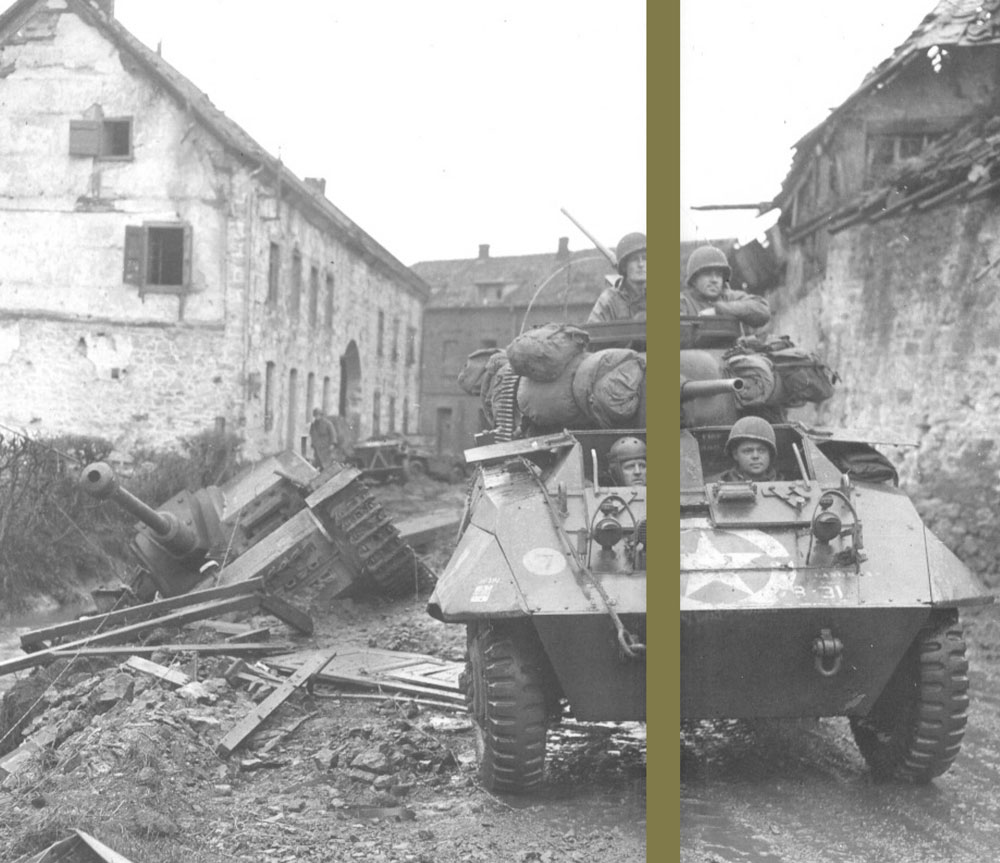 The M8 Greyhound, was the United States most widely deployed armored tar. Armament was a 37mm gun with a skate ring- mounted .50in Browning heavy machine gun on top of the turret. (TM) 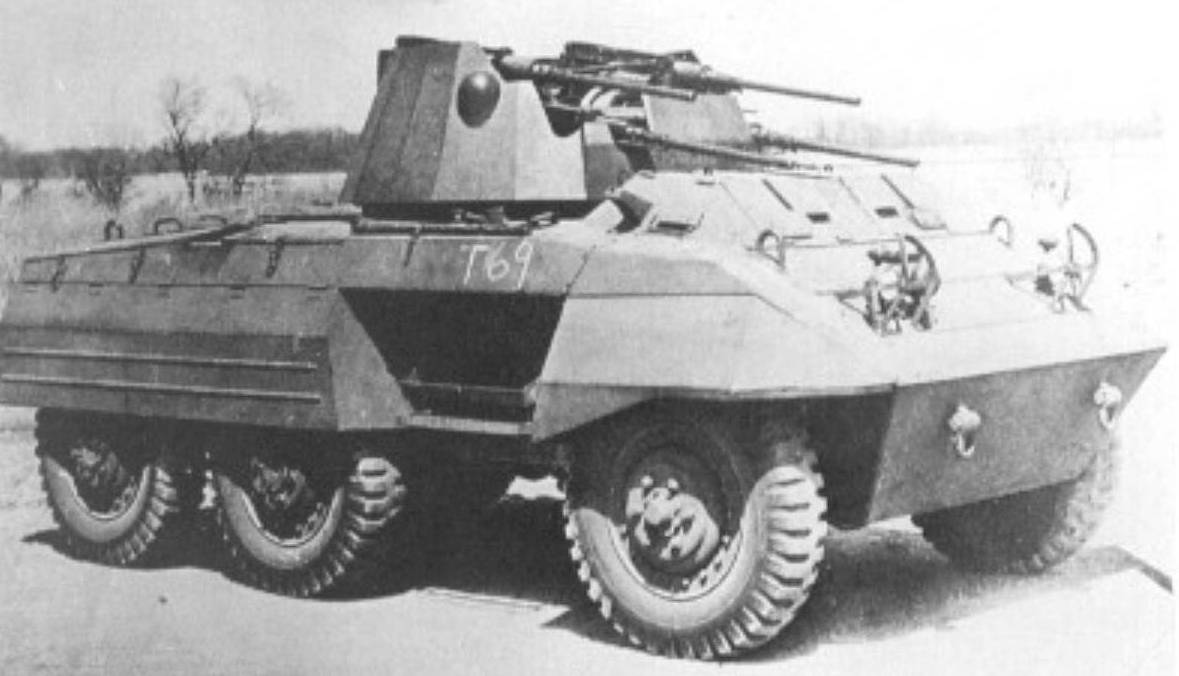 The T69, based on the M8 chassis, had quadruple .50in Maxson AA MGs mounted in an open-topped turret. (TM) 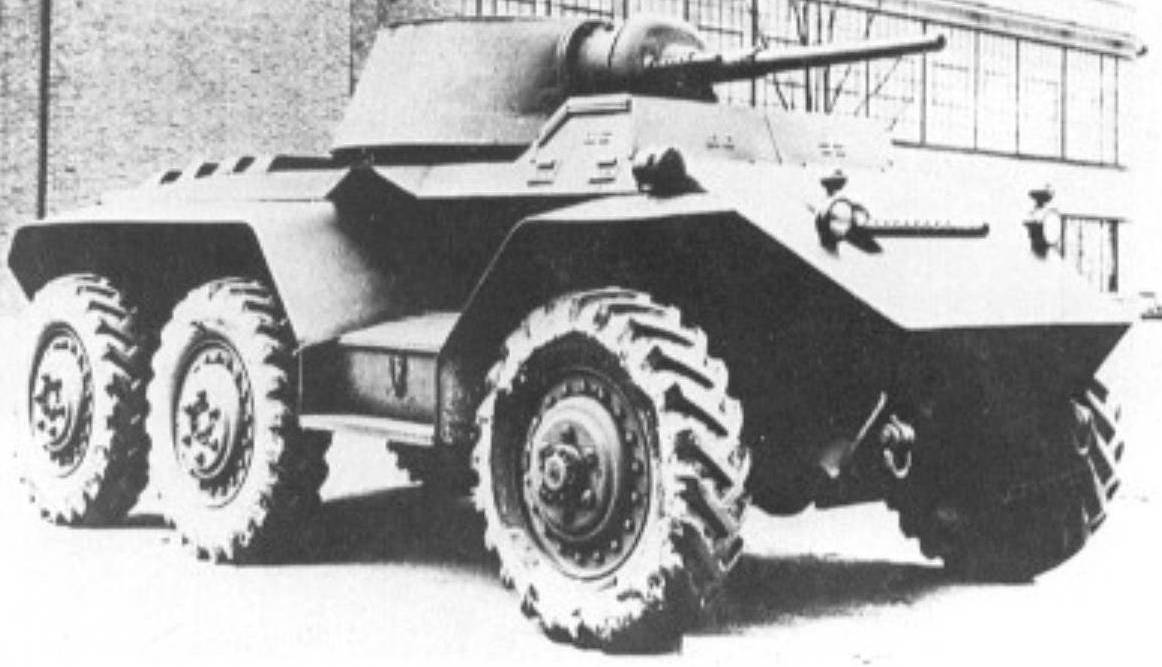 In 1942 Studebaker built the T21 a 6×4 armored car in the 7 to 8 ton range, which was also known as the GMC (Gun Motor Carriage) T43. It was not as successful on test as other models built around the same time, notably the Ford T22. The complete armored top to the driver and co-driver's compartment hinged downwards.

At 6.7tons the four-man. Ford-built 1 22 of 1942, was lighter and smaller (dimensions were 15ft long, 8ft 4ins wide and 6ft 8ins high) than many of the other contenders. It was armed with a 37mm M6 gun and co-ax .30in MCI in an M23 combination mount, with no form of stabilizer fitted, so firing on the move would have been extremely difficult. The driver's cab had a folding armored top. Development of the T22 led on to T22E1 and eventually to T22E2, which was the prototype for the Greyhound.

The United States' most widely used armored car of World War Two was the MS Greyhound. Built by the Ford Motor Company of St Paul, Minnesota the MM weighed 7.6tons, and was both fast (top speed 56mph) and quiet, making it ideal for reconnaissance operations. Its dimensions were 16ft 5ins long, 8ft 4ins wide and 7ft 5ins high, Powered by a rear-mounted six-cylinder 110hp Hercules JXD petrol engine, the four-man Greyhound was armed with a 37mm gun and co-ax .30in machine gun, mounted without a stabilizer in a manually traversed turret. 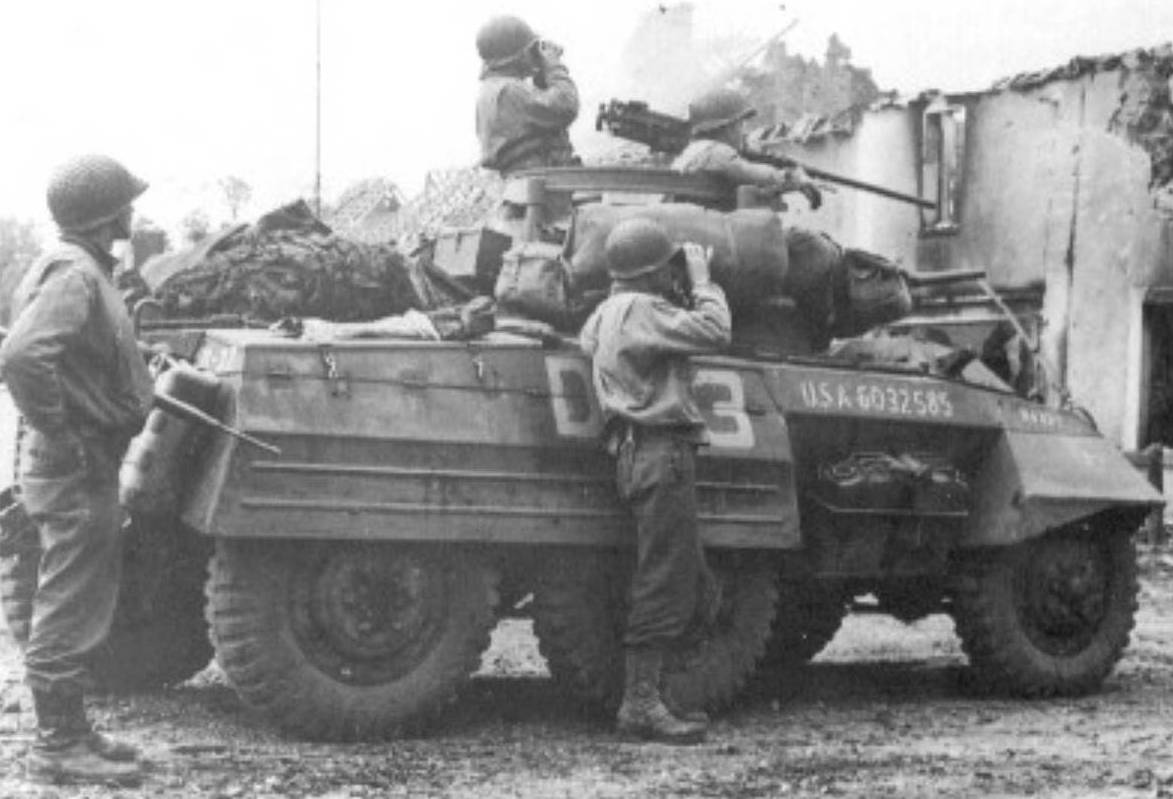 The crew of an M8 Greyhound observe enemy positions. (TM) 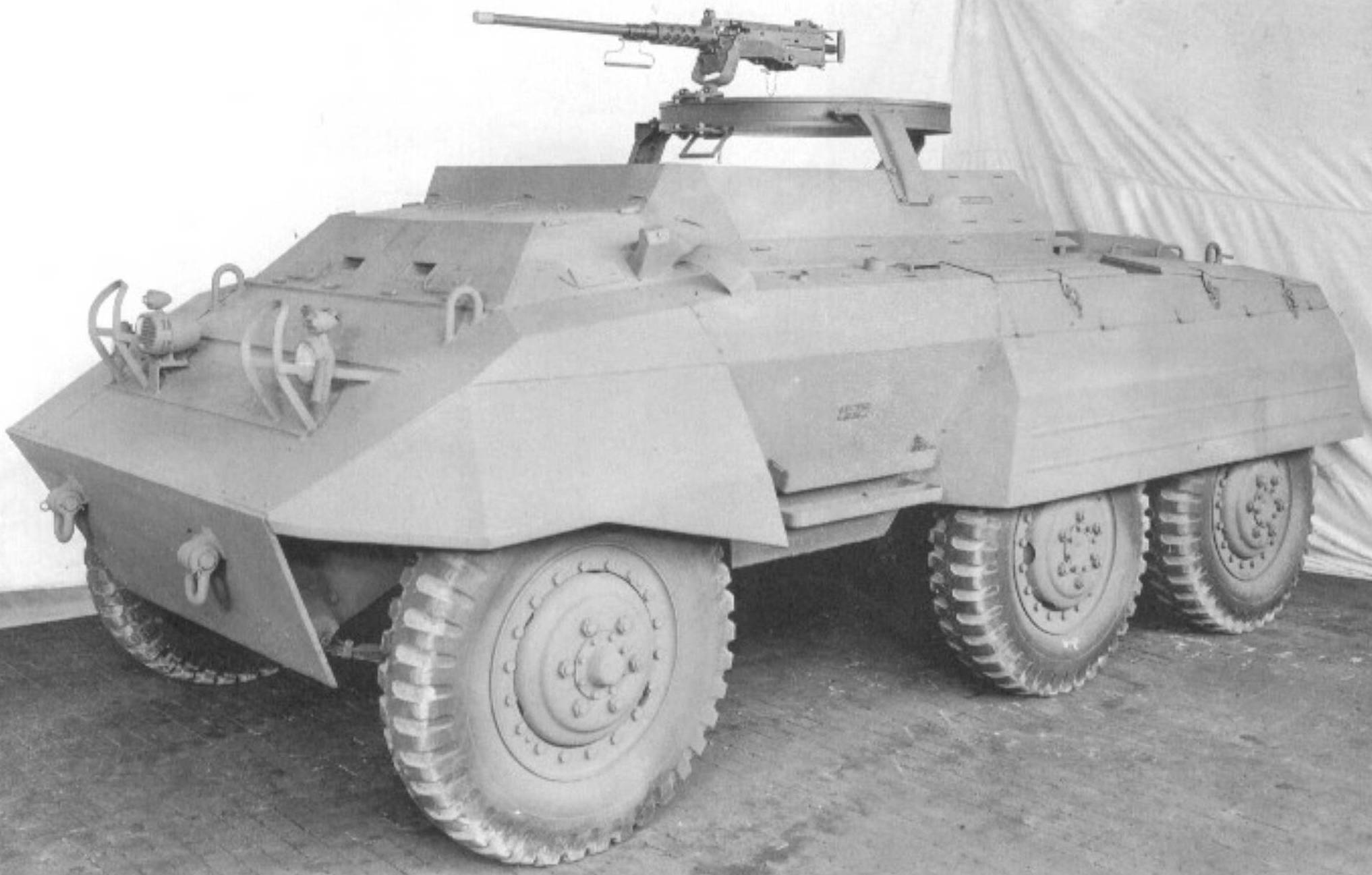 The M20 armored utility car, of which nearly 4,000 were built by Ford. A versatile machine with a .50in heavy machine gun on a skate-ring mount. (TM) 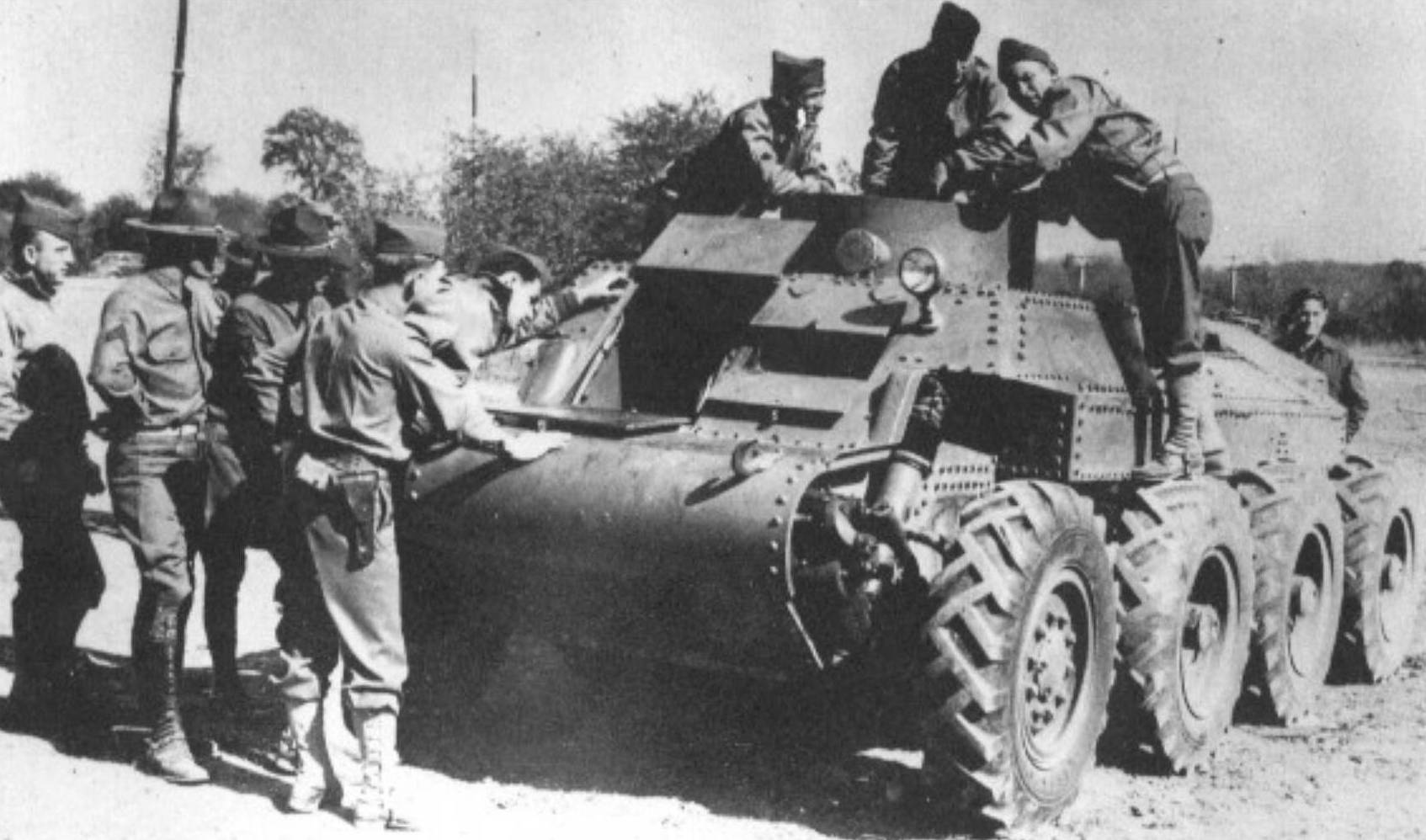 There was no hull machine gun, but a turret-mounted AA MG was fitted. A total of 8,523 were built and a reasonable number were used by the British Army. An M8E1 followed, which had slight suspension changes and a skatering mount added for the .50 AA machine gun. The GMC T69, was another version of the MS which mounted quadruple .50in Maxson machine guns in a multi-sided, open-topped, power-operated turret for AA defence. 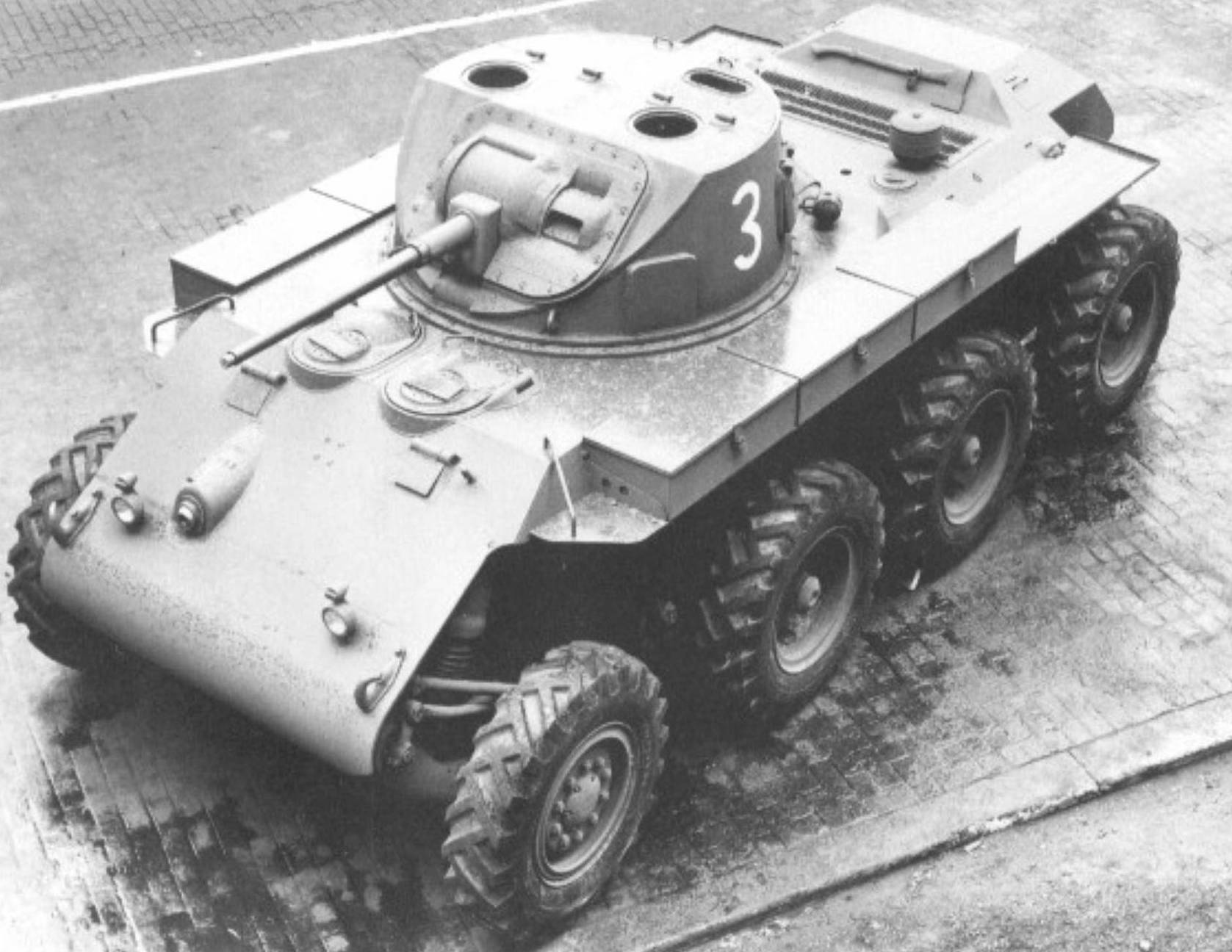 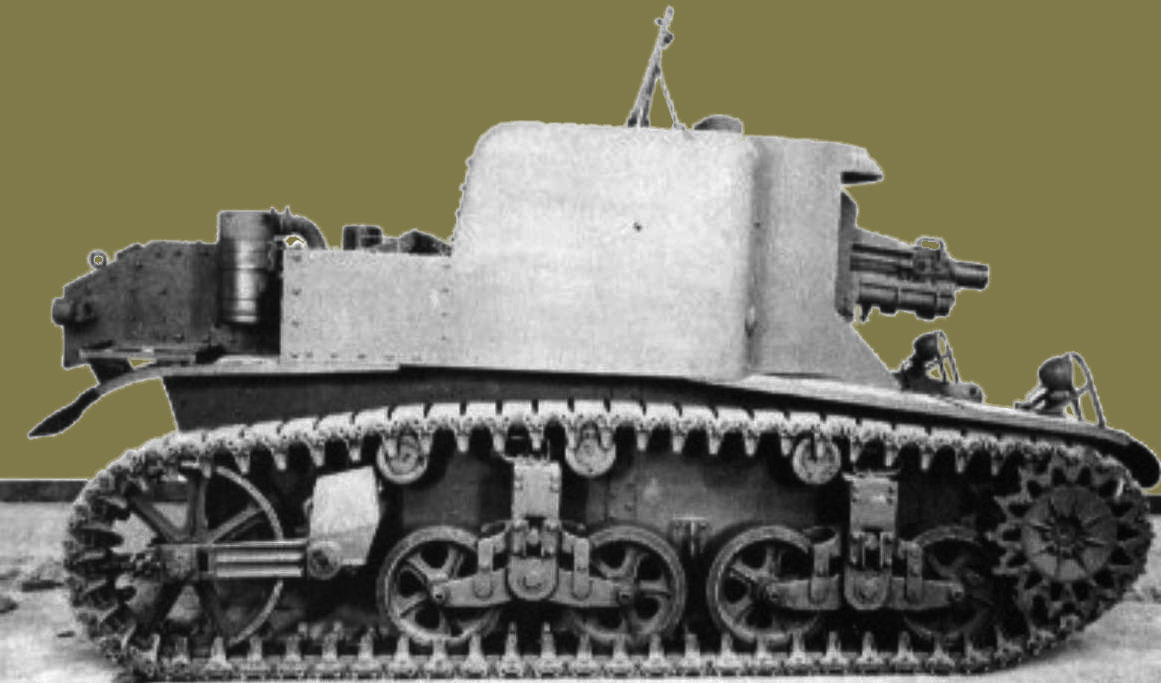 Ford also built nearly 4,000 of the M20 armored utility cars, which were also based on the T22 and known variously as the T26 and M10 armored utility car as well as its final designation M20. In place of a gun turret it mounted a .50in Browning heavy machine gun with a skate-ring mount, on what was the MS chassis, so there was no overhead cover for the crew. It was used for a variety of purposes, including both as a command car and an APC. Also there was an experimental version which mounted twin .50in Browning.

In 1942 the Chrysler Corporation also built the T23 armored car in competition to the 1 22. It looked very similar to the Ford T22, but had a large, high armored cowl over the driving compartment, which interfered with the depression of the main armament.

Built in 1944 as a successor to their T19E1, Chevrolet produced the good looking T28 armored car, which weighed 6.5tons and had a top speed of over 60mph. It was also sometimes called the Wolfhound. It was later designated as the M38 armored car, mounting a 37mm gun and .30in Browning in a M23 combination mount. In a postwar development it was fitted with the M24 Chaffee light tank turret, which mounted a 76mm gun.

The Christie-designed tanks had always been intended to run on roads, using their roadwheels and only needing to tit tracks when travelling crosscountry. Thus it was only logical to design an armored car, which had the same number of wheels (four on each side) as the Christie-type medium tanks, because the wheels would make the vehicle faster, quieter and require less maintenance. This led to the trackless tank being designed by the Trackless Tank Corporation in 1940 and tested at the Aberdeen Proving Ground (APG), Maryland the following year. Powered by a 270hp Guiberson diesel engine, and a five-speed manual transmission, it had chain drive to the three rear axles and steering only to the front axle. Only one was ever built. 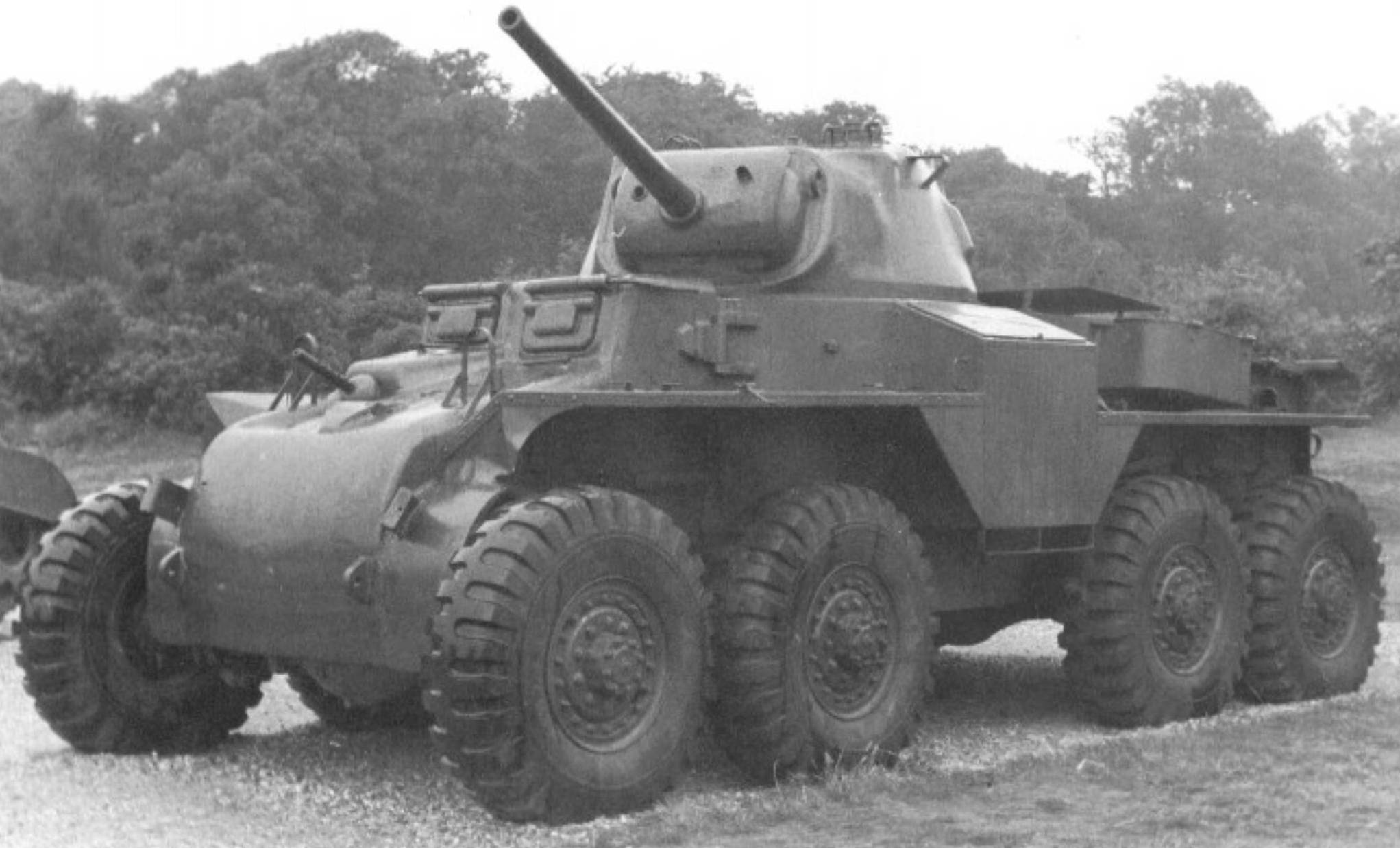 The T18E2 Boarhound armored car of 1942 followed on from the T18 pilot model. Built for the British but only thirty were ever completed. (TM)

Using all the experience gained from the trackless tank project the 14.3ton, T13 armored car was built in prototype form by the Reo Company in 1941. It had welded armor, mounted a 37mm main gun and co-ax .30in MG in the turret and had another MG in the hull. Three only were built and its dimensions were 17ft 1in long, 8ft 4ins wide and 7ft 2ins high.

The Yellow Coach division of General Motors built the T18 a large - over 26 tons armored car in 1942. It led directly on to the T8E2. known by the British as the Boarhound.

Very heavy at 26.8 tons and very large 20ft 6ins long, 10ft 1in wide and 8ft 7ins high - it mounted a formidable 57mm (6 pounder) gun. plus two machine guns (as for the T13). Armor thickness was up to 50mm in some parts. Thirty were built for the British, but never saw action. One remains at the Tank Museum, Bovington. 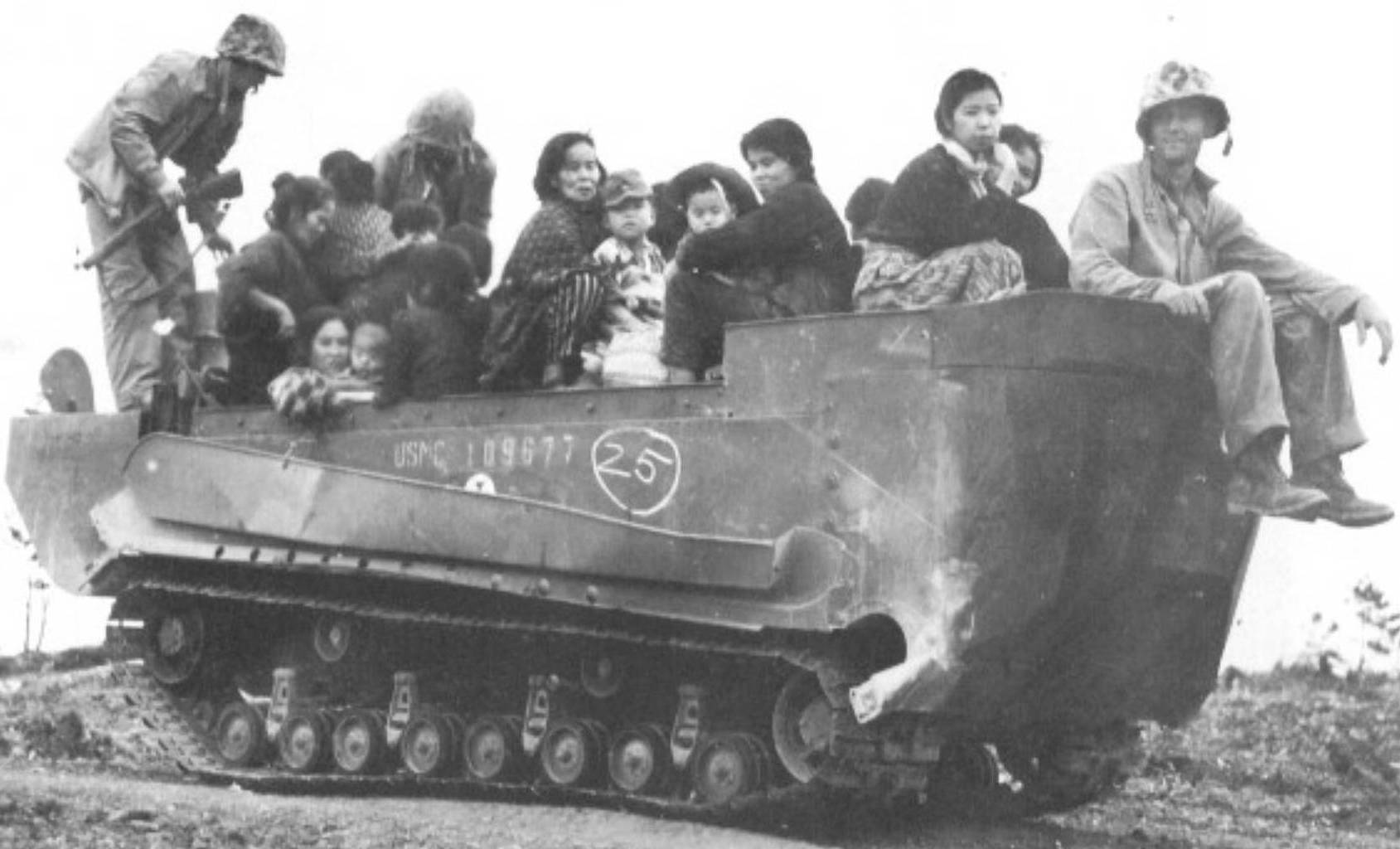 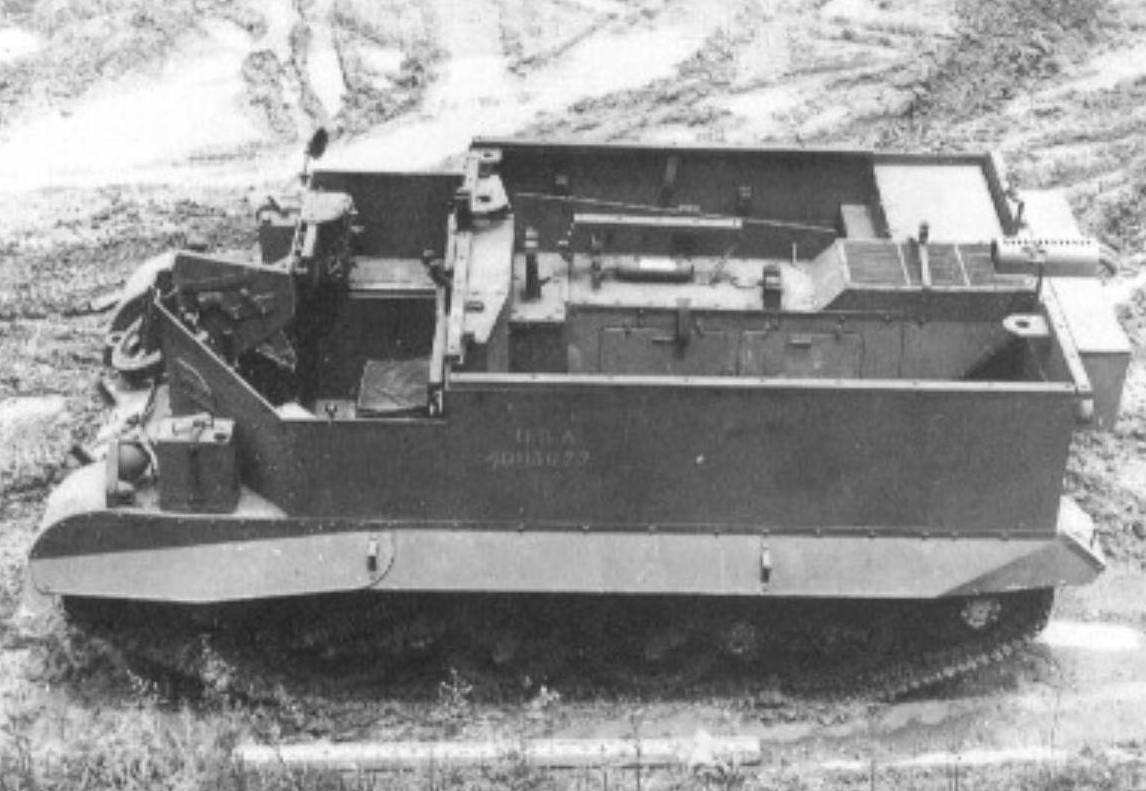 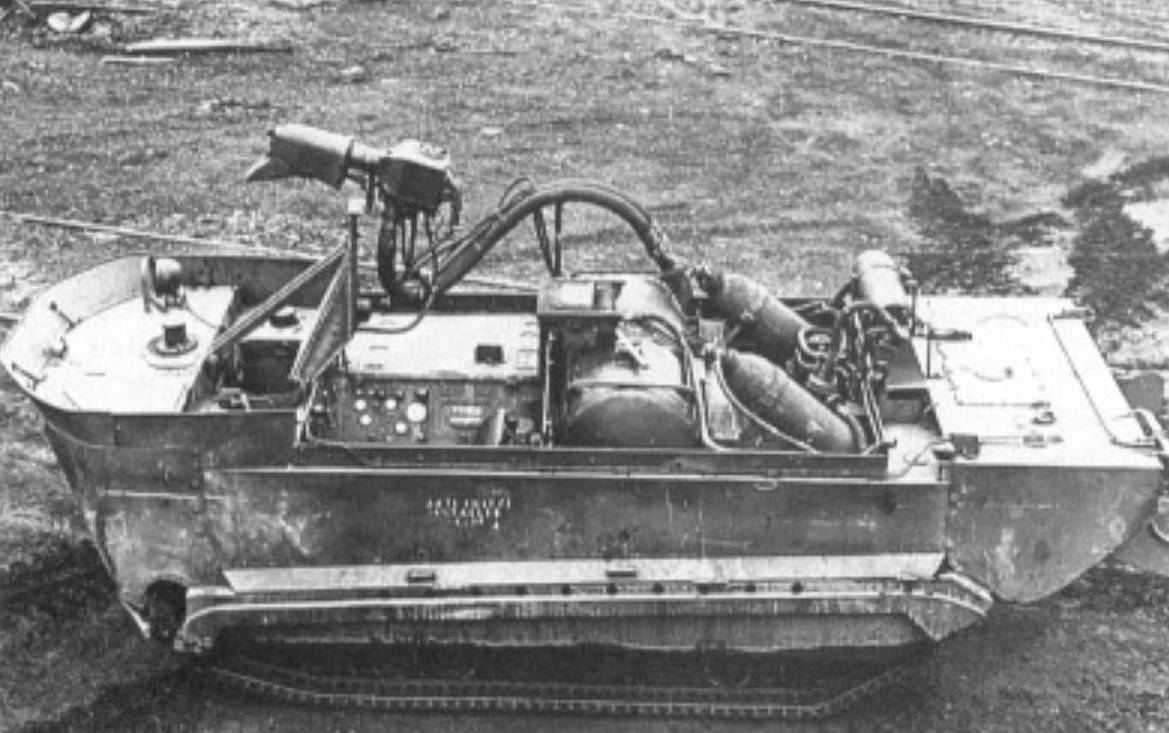 Built by Studebaker, the T27 armored car of 1943 was a good looking vehicle, which resembled the Greyhound, but had eight equally main reason tor this reduction was that the war in Europe was clearly ending and the M28/M29 Weasel cargo carrier was considered more suitable in the fighting against Japan. Ford then switched to the production of the Weasel.

Ford's survey had found that the British T16 was of riveted construction, which they considered would not stand up to the battlefield conditions expected, therefore they chose a welded hull which was not only stronger and waterproof, but was also capable of being manufactured more efficiently and economically. The redesigned carrier was a righthand drive, fully- tracked vehicle, powered by a 100hp Ford engine and was operated by two steering levers directly in front of the driver. It had four forward gears and. reverse. A number of T16s produced were equipped with radio (WS 19) and Intraphone. It had four bogie wheels on each side, instead of three. Specifications for the Universal Carrier T16 as it was now called were: Battle Weight: 4.21 tons (empty the T16 weighed 3.46 ton) Crew four, length 12ft 8½ins, width 6ft 11ins and height 5ft ½in. Engine: V8 100hp Ford-Mercury, located lengthwise, in the centre of the hull. A Mk II was produced in 1945, on which the positions of the bogie wheels were altered slightly in order to give better stability. 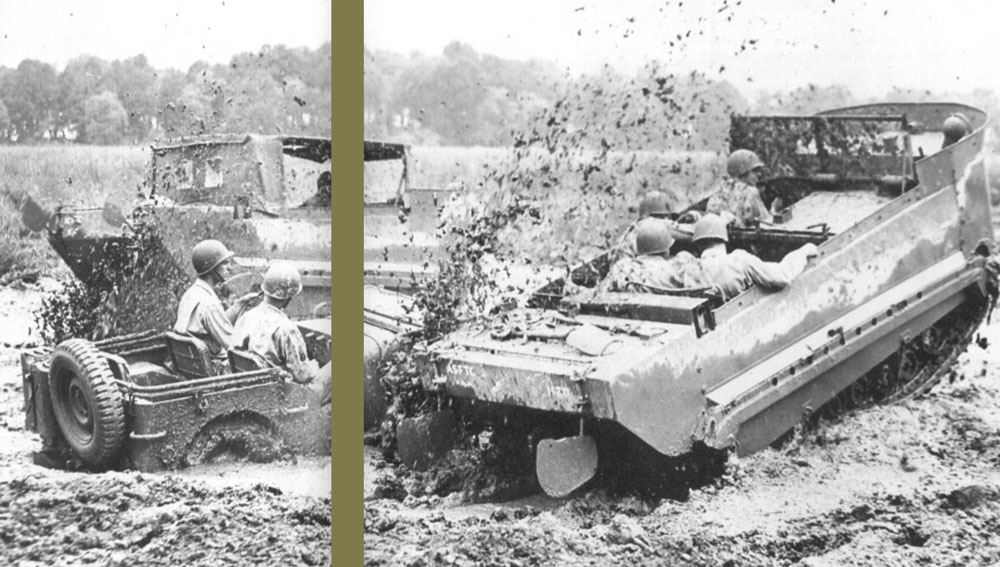 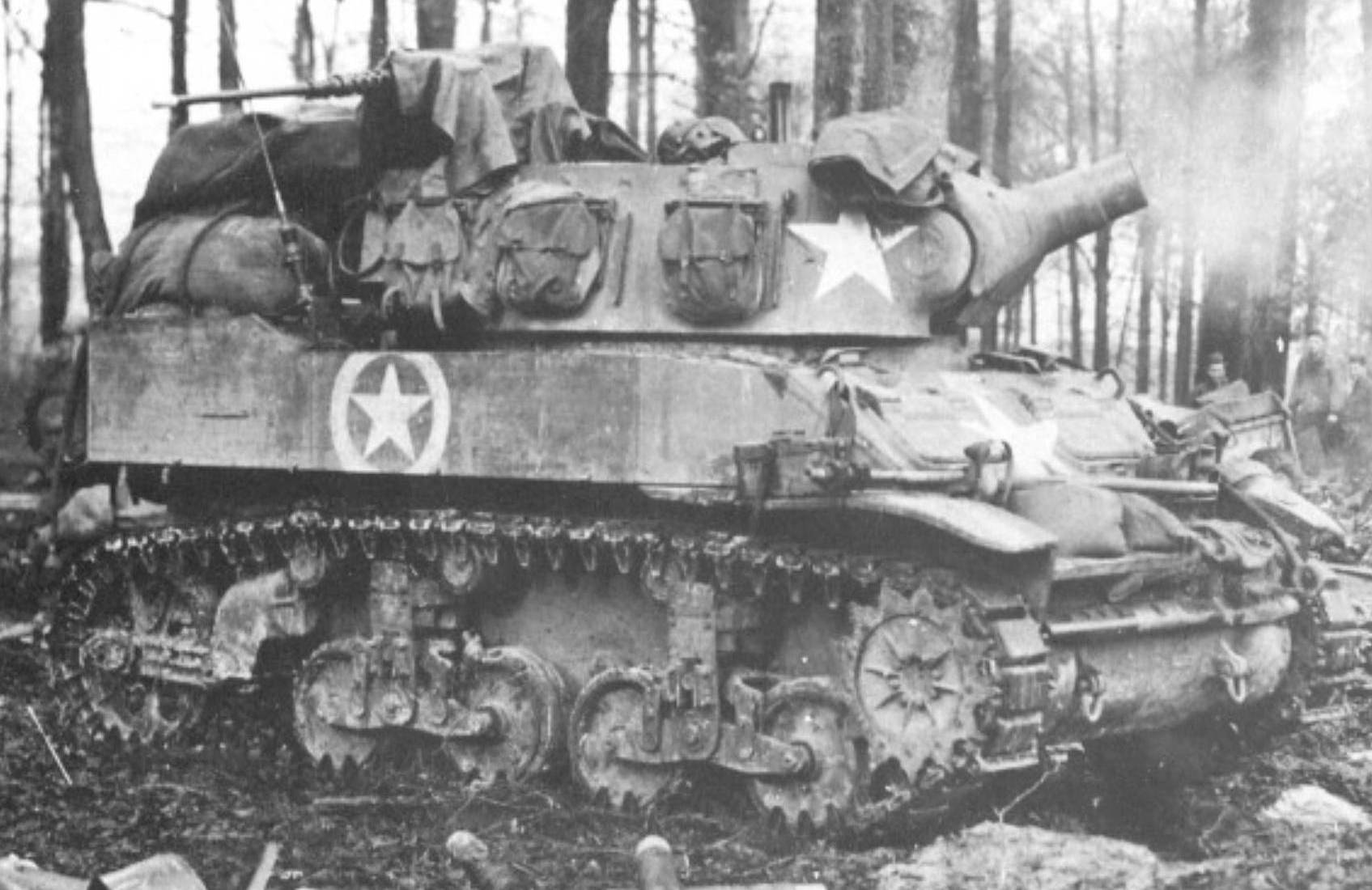 An M8 HMC in action. Between September 1942 and January 1944, Cadillac built 1,778 of these excellent 75mm self-propelled howitzers. All were built on the MS light tank chassis. (TM) 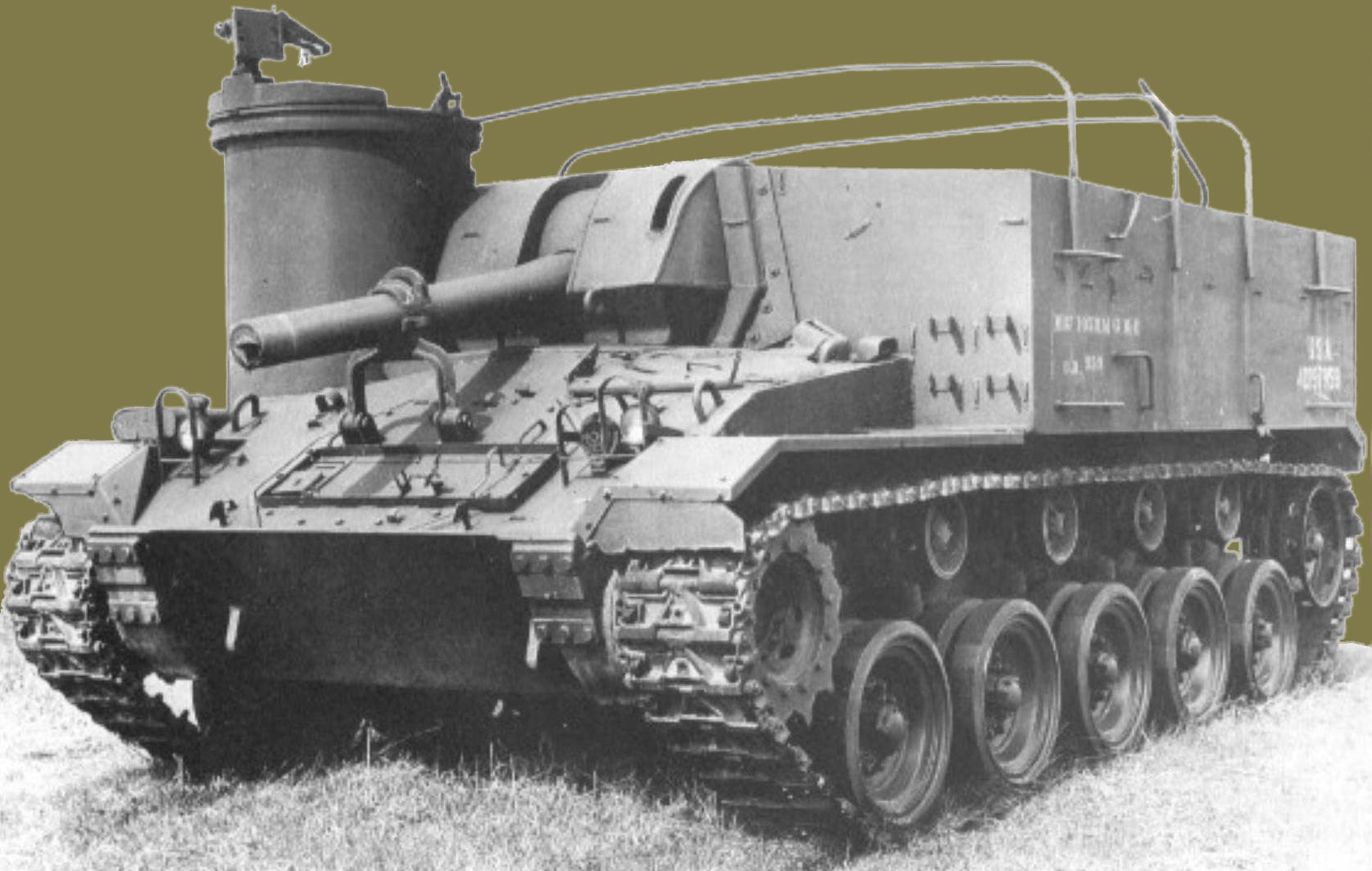 The M37 (T 76) 105 mm HMC was designed and built on the Chaffee light tank chassis to replace the M7 HMC, but only a few were completed before the end of World War (TM)

Having carried out operations in both Alaska and the Aleutians, the need for a special tracked vehicle which could easily move over snow became apparent. In 1943, the M28 Carrier named Weasel entered service. Weighing only 2.68 tons it carried a crew of two to four men and had tracks eighteen inches wide, so its performance on snow was excellent. It had a limited cargo capacity of 1,200lb, but could tow 4,2001b. It was powered by a rear-mounted six-cylinder 65hp Studebaker engine, with drive sprockets at the front and had a range of approximately 175 miles. It was followed rapidly by the M29, which had the engine in front and drive sprockets at the rear, this improved the performance and gave more space for stowage. Tracks were also widened by two inches to twenty inches. A third model, the M29C was also produced which was fully amphibious with buoyancy chambers, twin rudders and a spray guard on the bow. Weasel was especially useful in such places as the mountains of Italy, where the US Army 10th Mountain Division was operating. Dimensions of this excellent little vehicle were: length: 16ft, width: 5ft 7½ins and height: 5ft 11ins.

Although ideal in snow it also performed well in other conditions and, as explained was selected for use against the Japanese, Ford Motor Company of Somerville signed a contract in January 1945 to produce 10,692, did its engineering work and prepared the factory ready for production, just as the war ended! 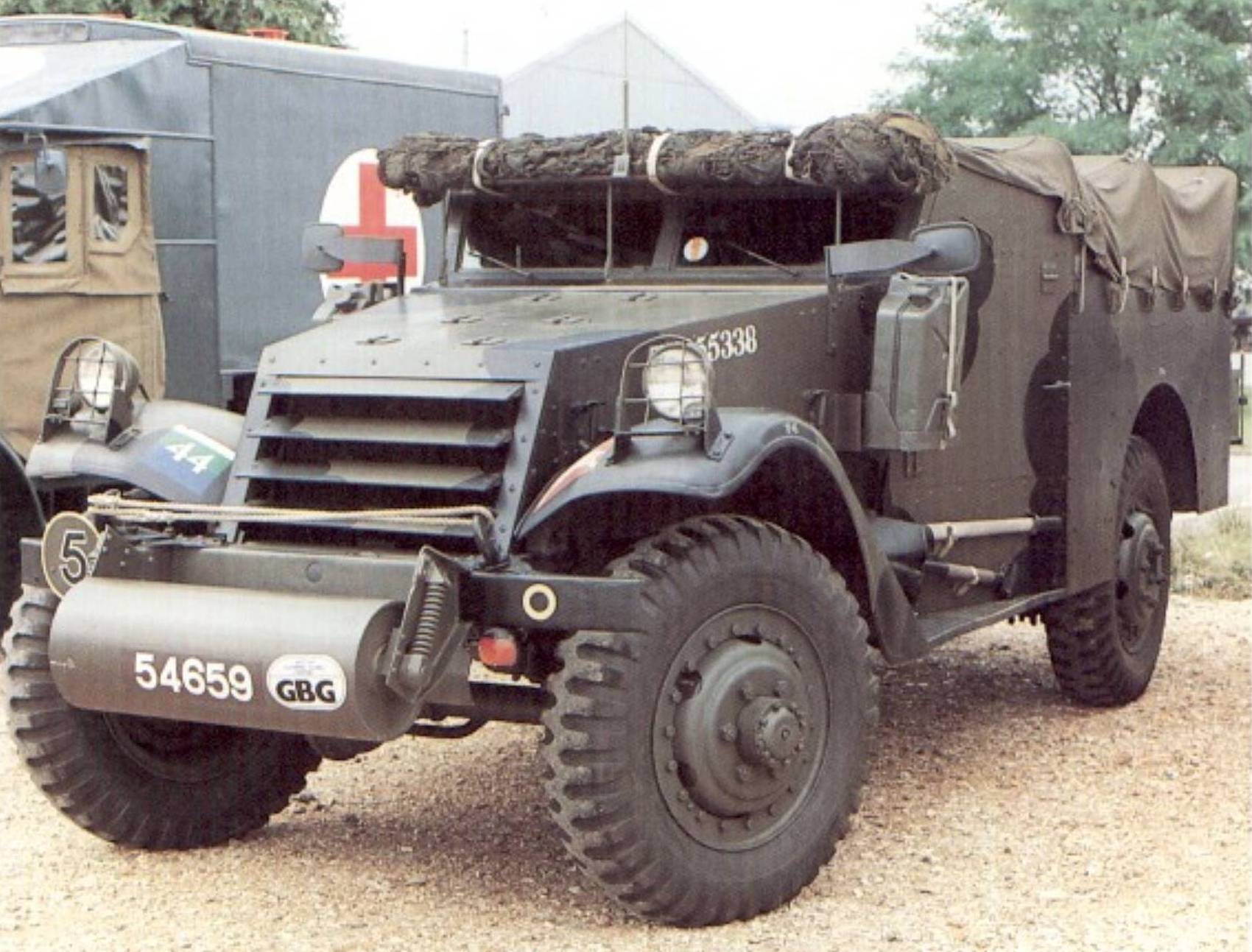 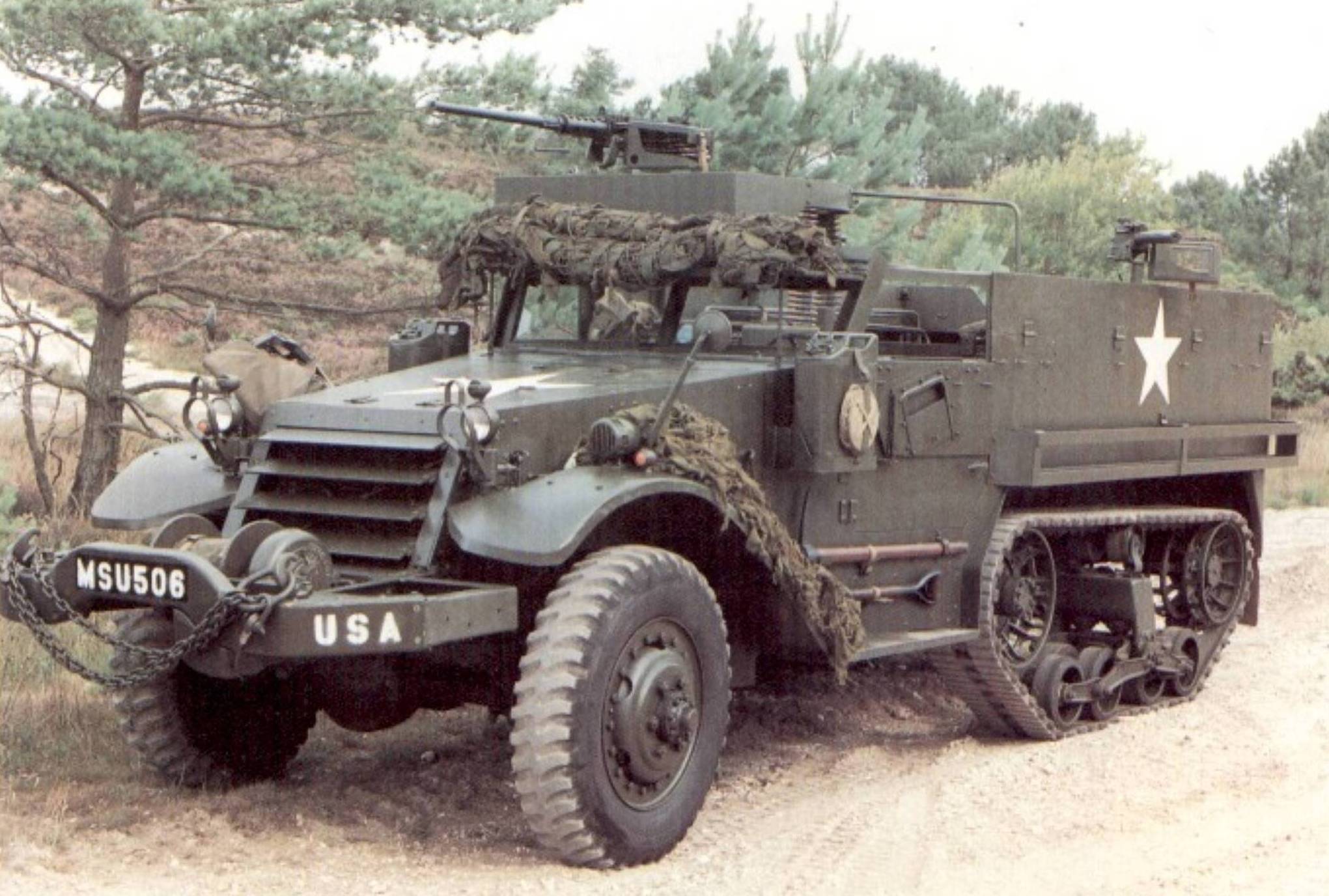 On the Bovington Training Area during one of the RAC Centre's 'Battle Days' is this well equipped and restored White half-track, armed with both .50in and .30in Browning machine guns. (TM/Roland Groom) 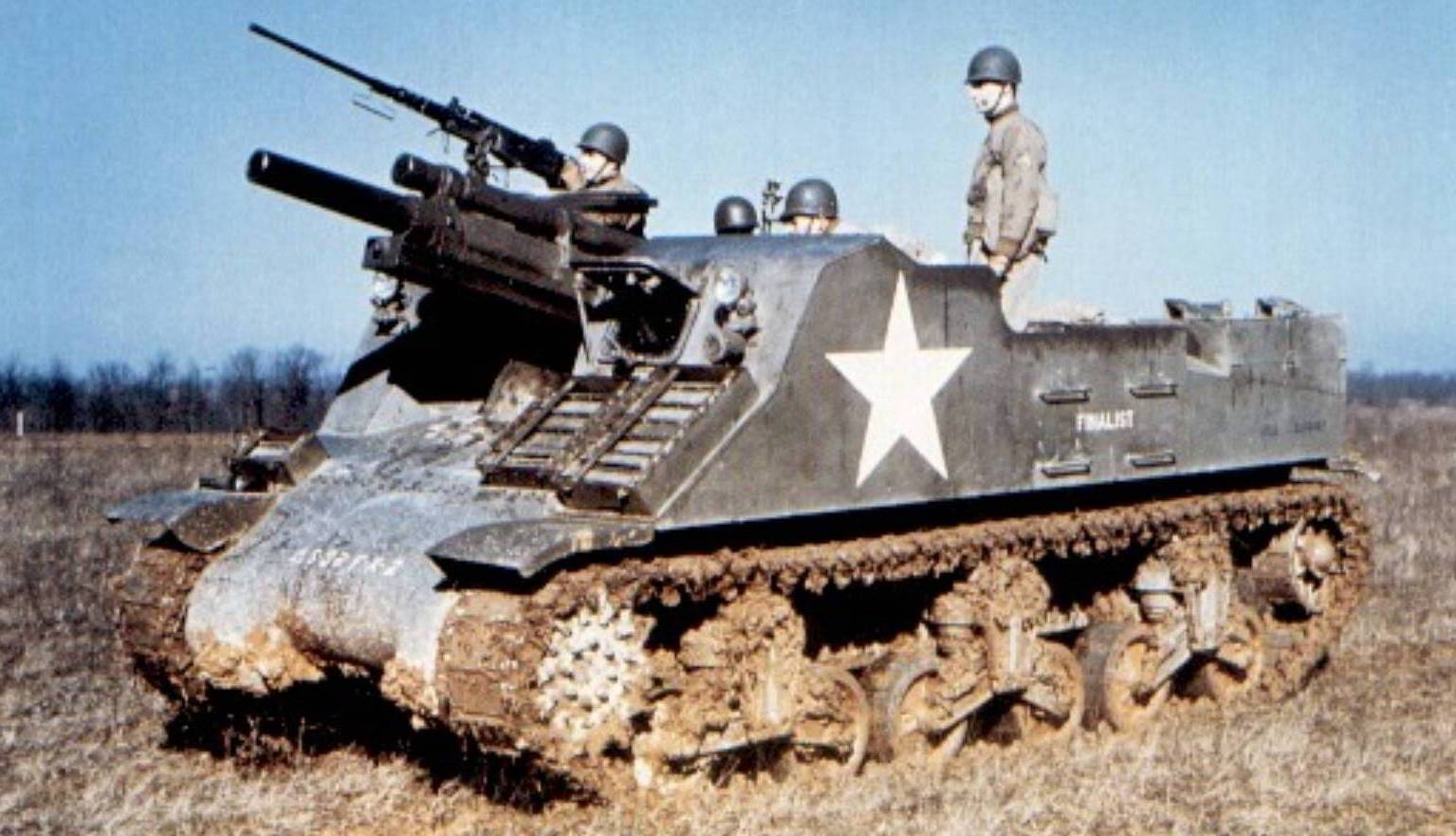 Another view of the Priest, showing four of the seven-man crew and the pulpit-mounted .50in Browning heavy machine gun. (Patton Museum)

A privately-owned (part of the AF Budge Colleciton) M7 Priest HMC, mounted a 105mm howitzer. It became the standard equipment of artillery battalions in US Armored Divisions. (TM/Roland Groom) 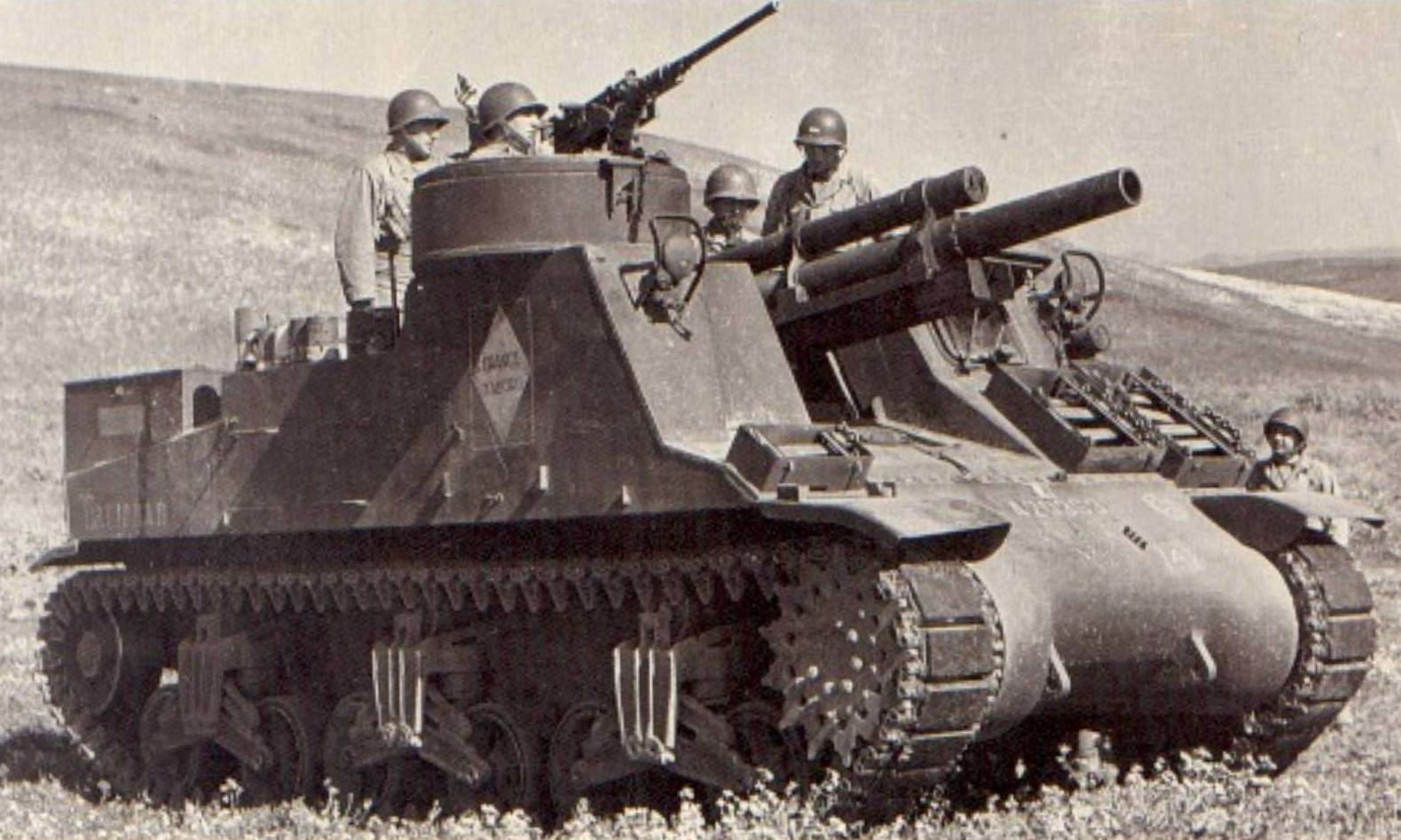 This M7 HMC was in service with a Free French SP artillery regiment. The Americans provided most of the equipment for the French 2nd Armoured Division, which was part of General Patton's Third Army. (TM) 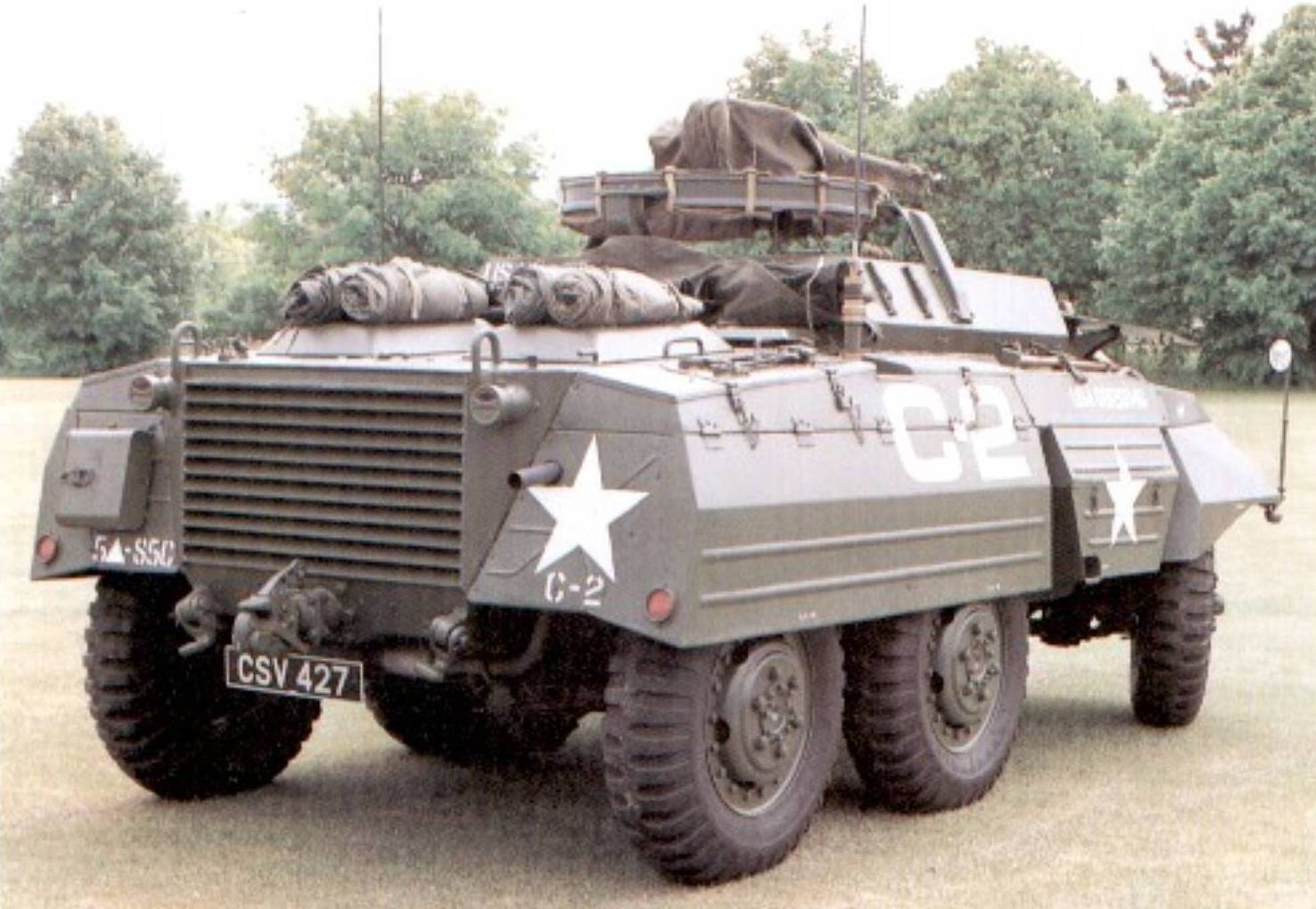 The M20 was a turretless M8 Greyhound, armed with a ring-mounted .50in Browning heavy machine gun. (TM/Roland Groom) 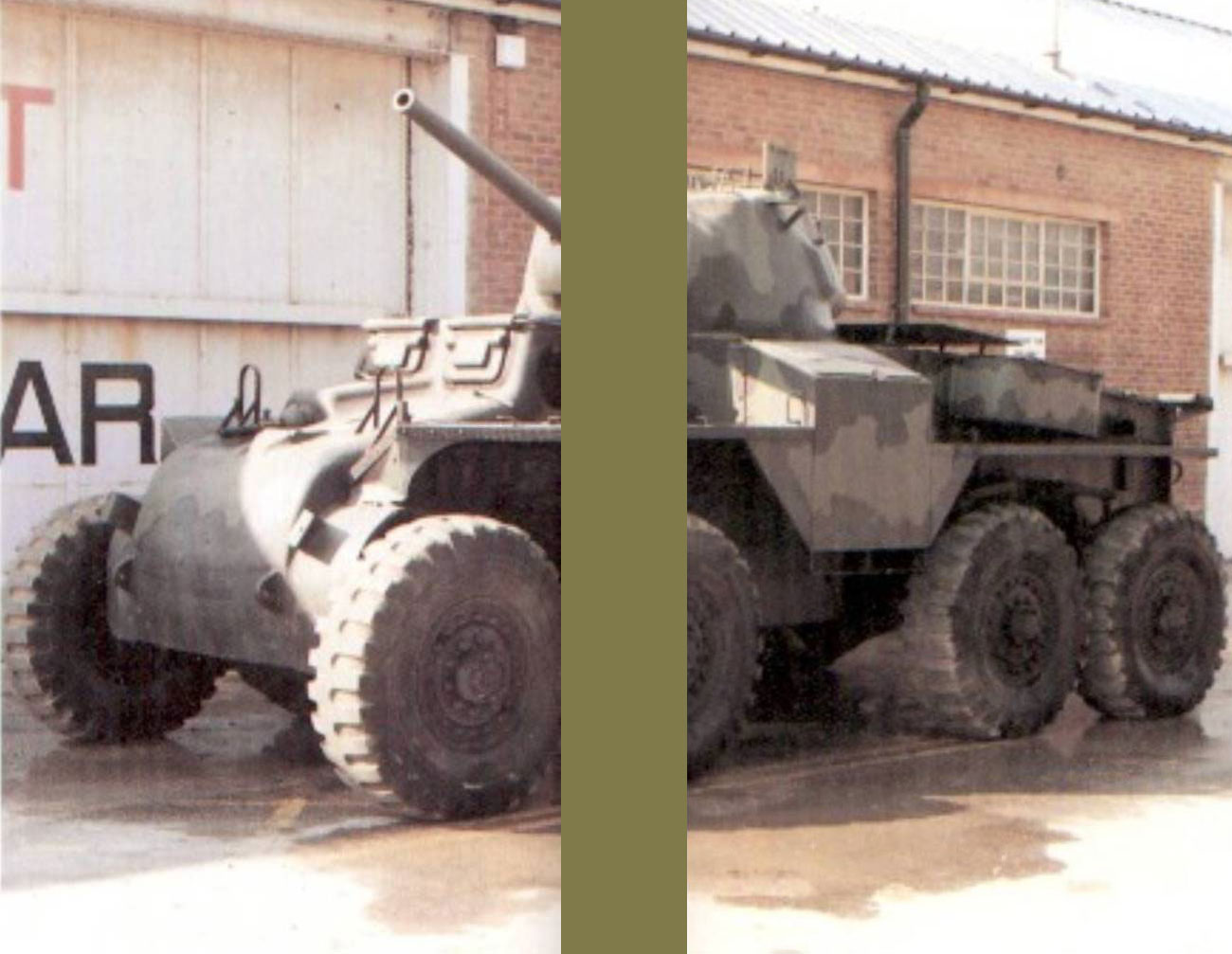 The only remaining T16E2 Boarhound armoured car in Great Britain is at the Tank Museum. It was a massive 26.8 ton vehicle, armed with a 57mm gun. (TM/Roland Groom) 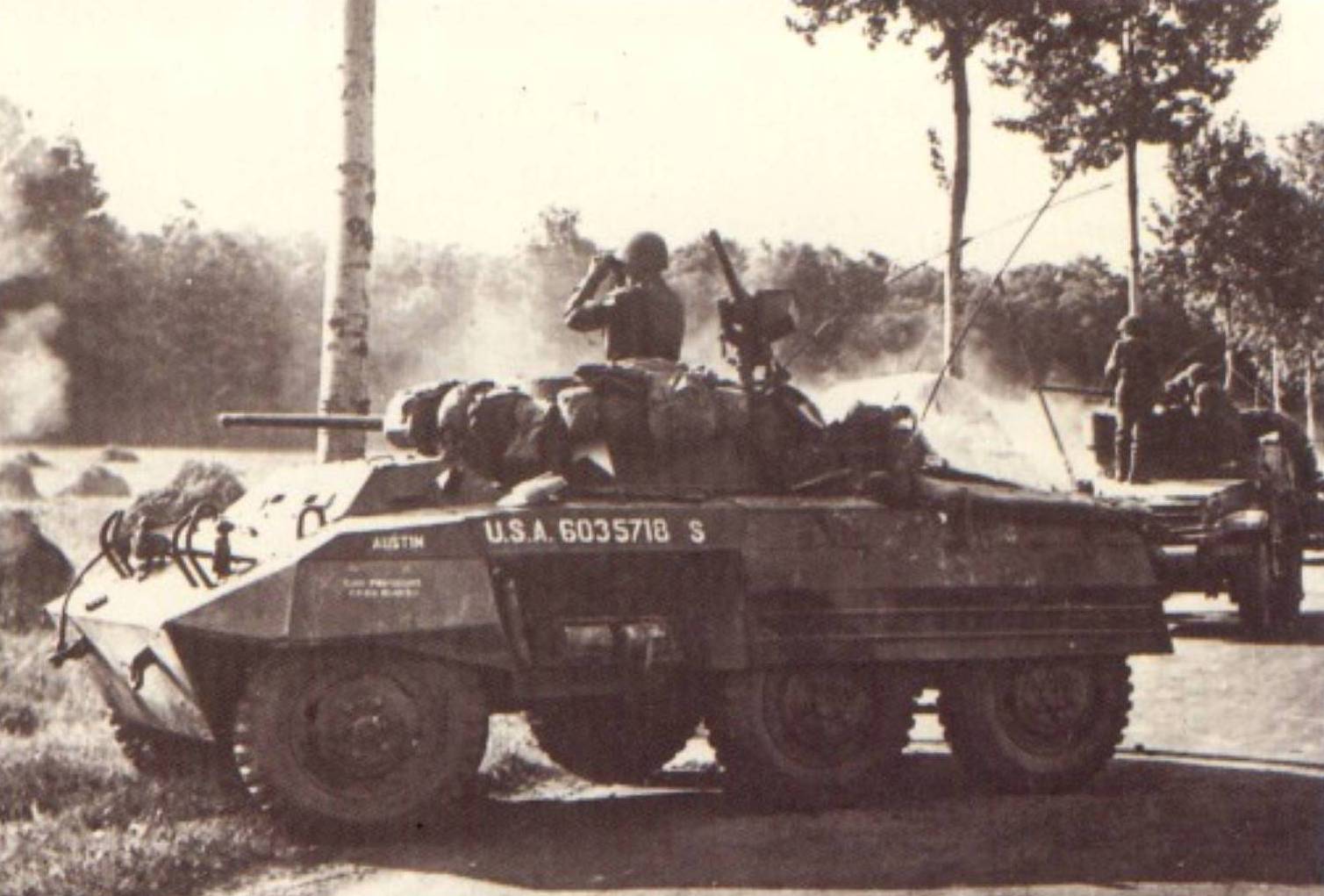 The M8 Greyhound was the only armoured car to be used by the US Army in large numbers. Over 8.500 were built by the Ford Motor Company. (TM/Roland Groom)

The GMC M10 tank destroyer, mounted an M7 gun, was also known as the Wolverine. This one, in service with the US First Army is seen passing through the damaged town of Duren, Germany in February 1945. It is still fitted with a Culin hedgerow cutter which had proved invaluable in the bocage countryside of Normandy. (TM) 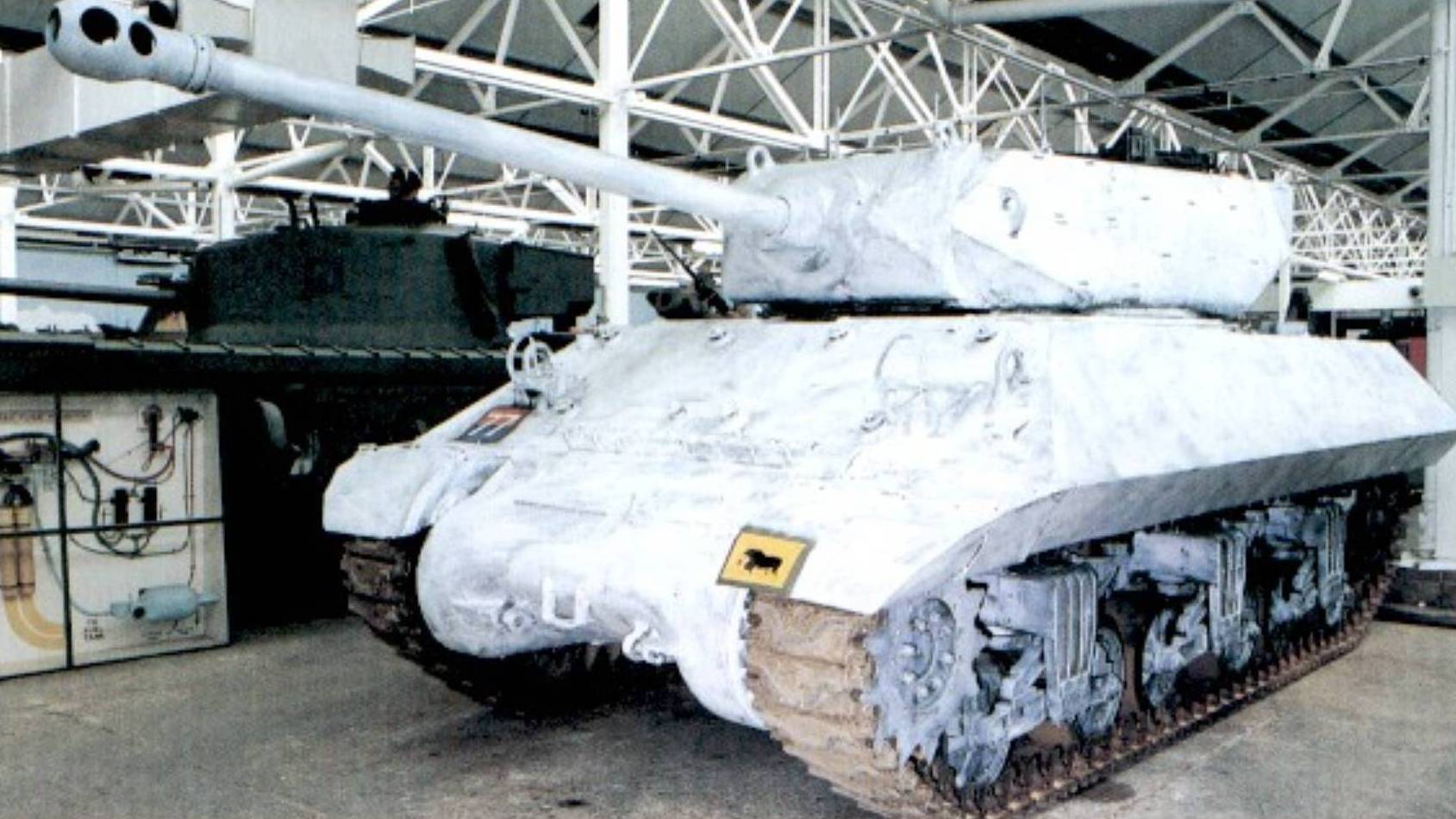 M10s were sometimes used to provide artillery support, especially when there were shortages of conventional artillery. The 3-inch gun had a maximum range in excess of 14.500metres and fifty-four rounds were carried on the vehicle. (TM) 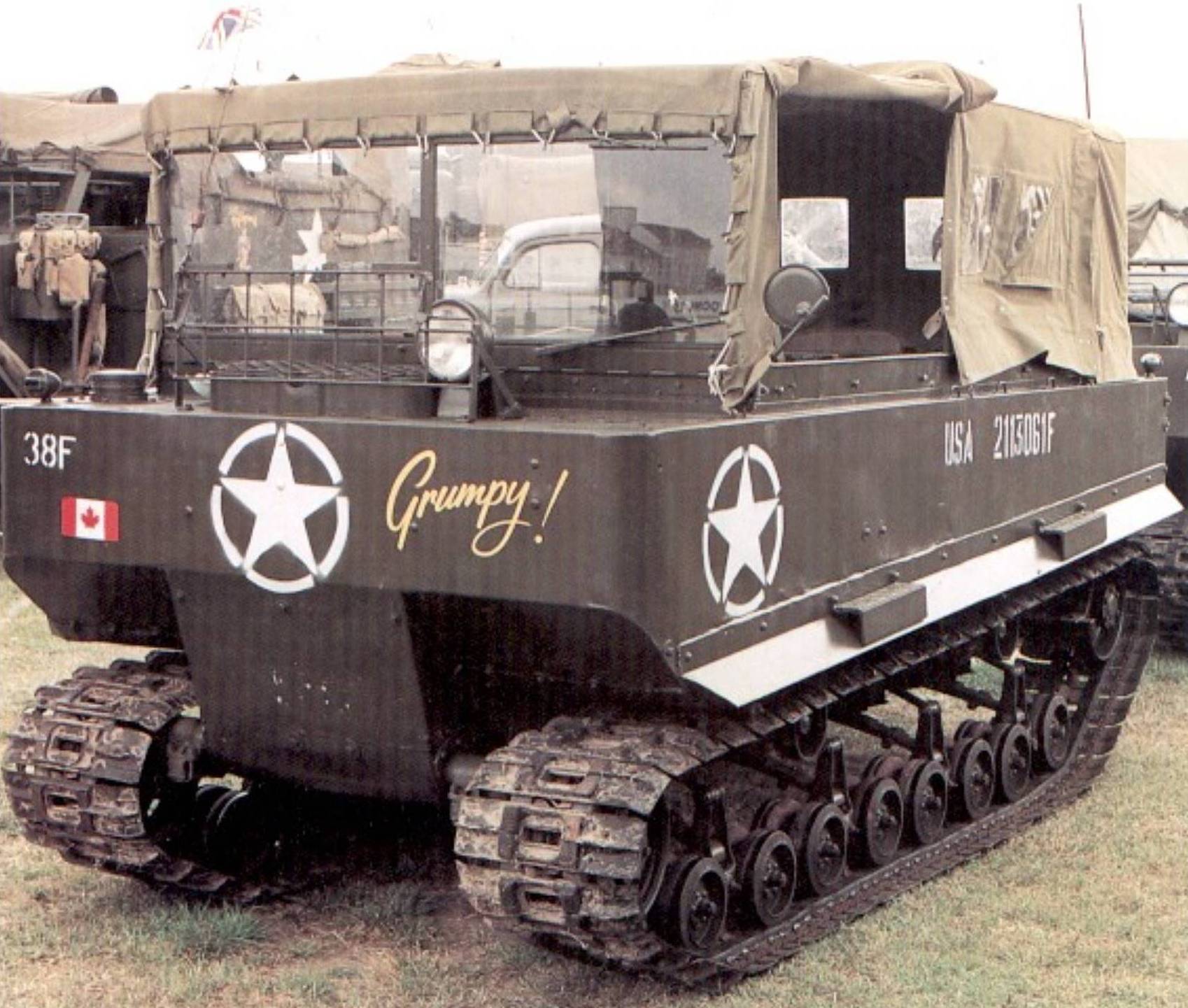 The diminutive 2.68 ton Weasel tracked carrier was originally introduced for use over snow. 'Grumpy' was one of two privately-owned Weasels on display at the 50th anniversary of the Victory in Europe Military Vehicle Show, Southsea, England in 1995. (TM/Roland Groom) 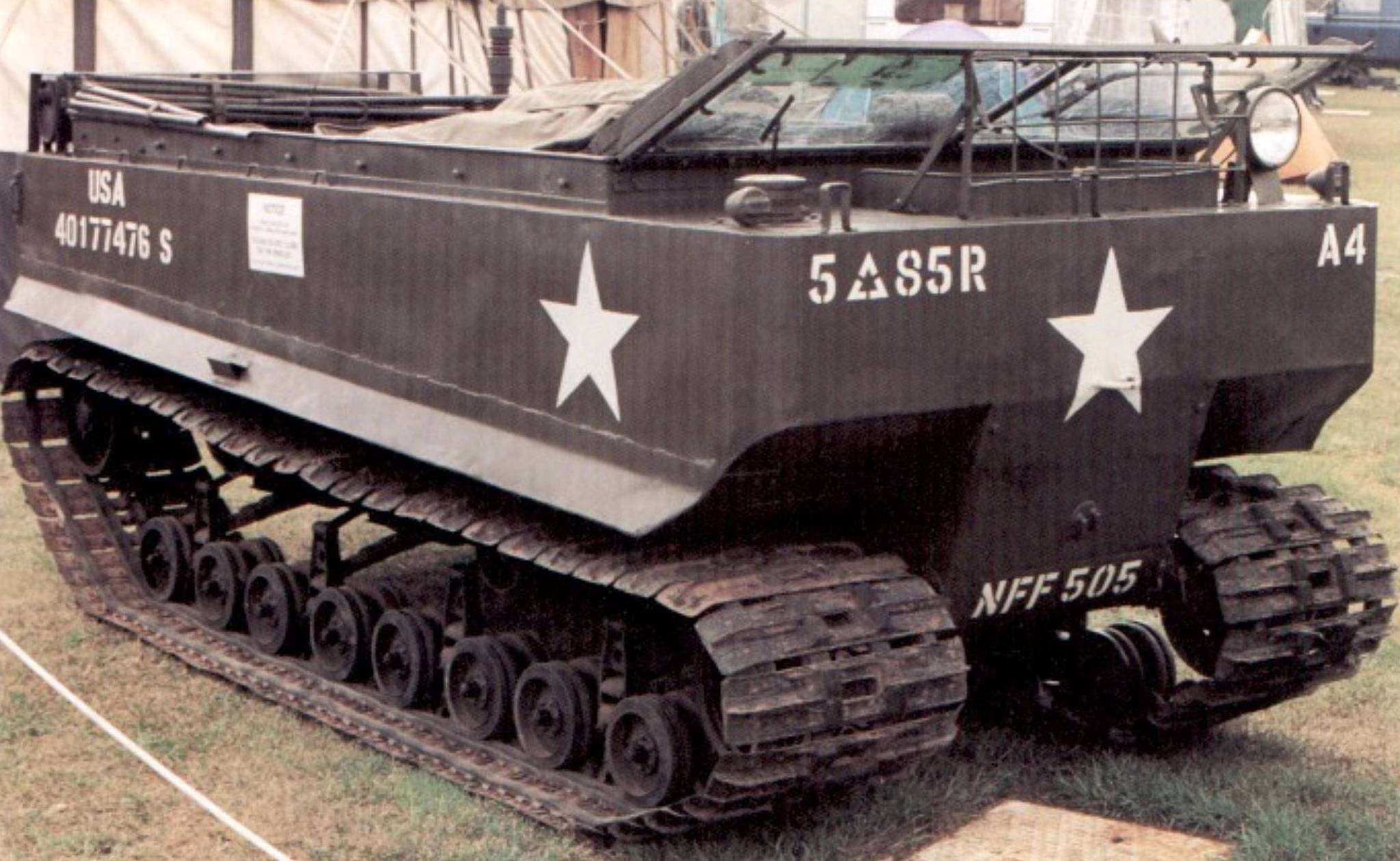