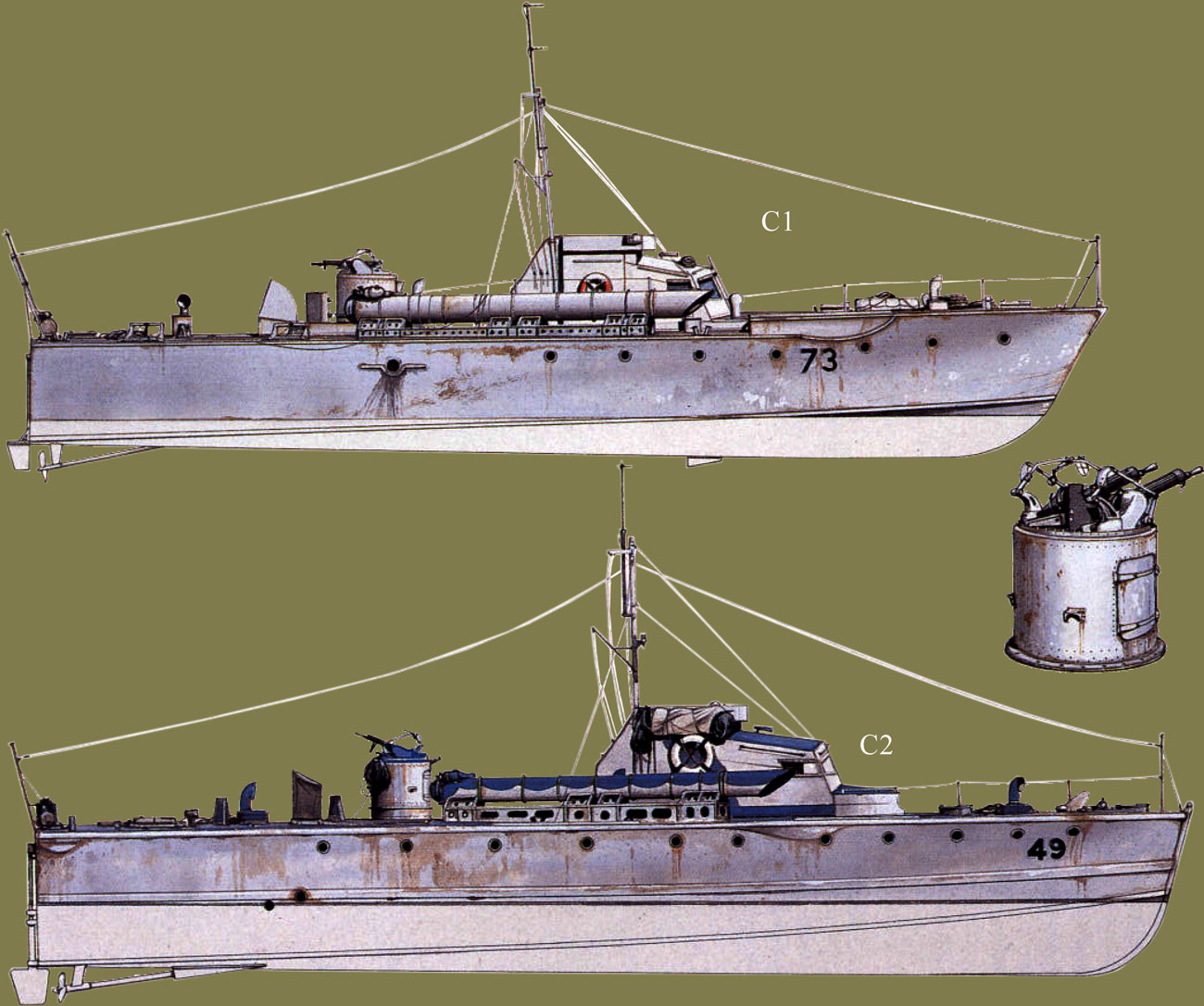 By 1940 Vosper had modified its pre-war and early war designs, creating a large 72-foot 6-inch boat which was fitted with larger engines and bigger fuel tanks. MTB 73 was one of 26 Vosper boats ordered in May 1940, and was delivered to the Royal Navy in October 1941. A highly successful design, the improved Vosper boats became the mainstay of the Coastal Forces fleet until the arrival of the late-war Vospers in 1944. MTB 73 formed part of the 8th MTB Flotilla, and, under the command of Lt. Tomlinson RN (and later Lt. Aimers RN), operated in the Mediterranean throughout its career, before being bombed and sunk by German aircraft off the northern tip of Sardinia on 24 November 1943. An inset of the twin .5-inch Vickers machine gun mount fitted to most early Vosper boats is shown. 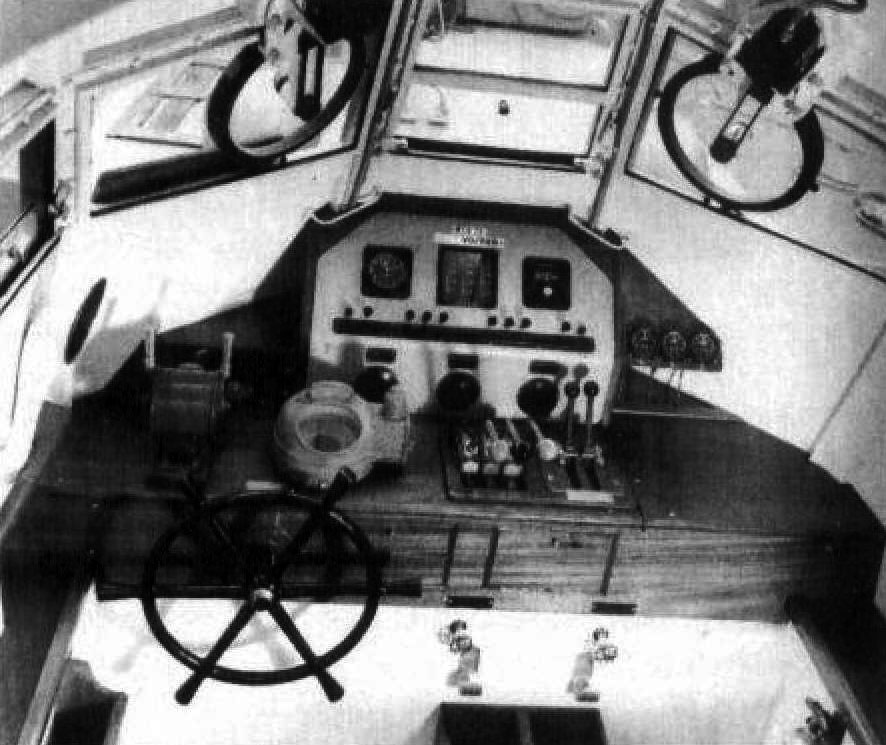 The wheelhouse of a Vosper 70-foot boat (MTB 73) viewed from the top of the companionway leading to the bridge. The bridge instruments were repeated, but in addition the instrument panel contained a clock, a rev counter and engine gauges. Two circular 'clear view' screens were designed to improve visibility in rough weather. (Vosper Thornycroft (UK) Ltd)

In addition to its early-war CMBs, Thornycroft produced its own design of eight 75-foot MTBs, designed in 1939 but built in 1940-41. Although these vessels lacked the speed of contemporary Vosper models, their large displacement (52 tons, compared to 40 tons for a 72-foot 6-inch Vosper) and heavy construction made them particularly good at absorbing damage. An armoured bridge and wheelhouse protected the crew, and all craft were equipped with radar and ASDIC, making them valuable general-purpose warships. All eight boats formed the 11th MTB Flotilla, operating from Dover, Portland and Portsmouth during 1941-42. In late 1942 all of these vessels were converted into target-towing launches and renamed, MTB 49 becoming War Office Launch Meggido. 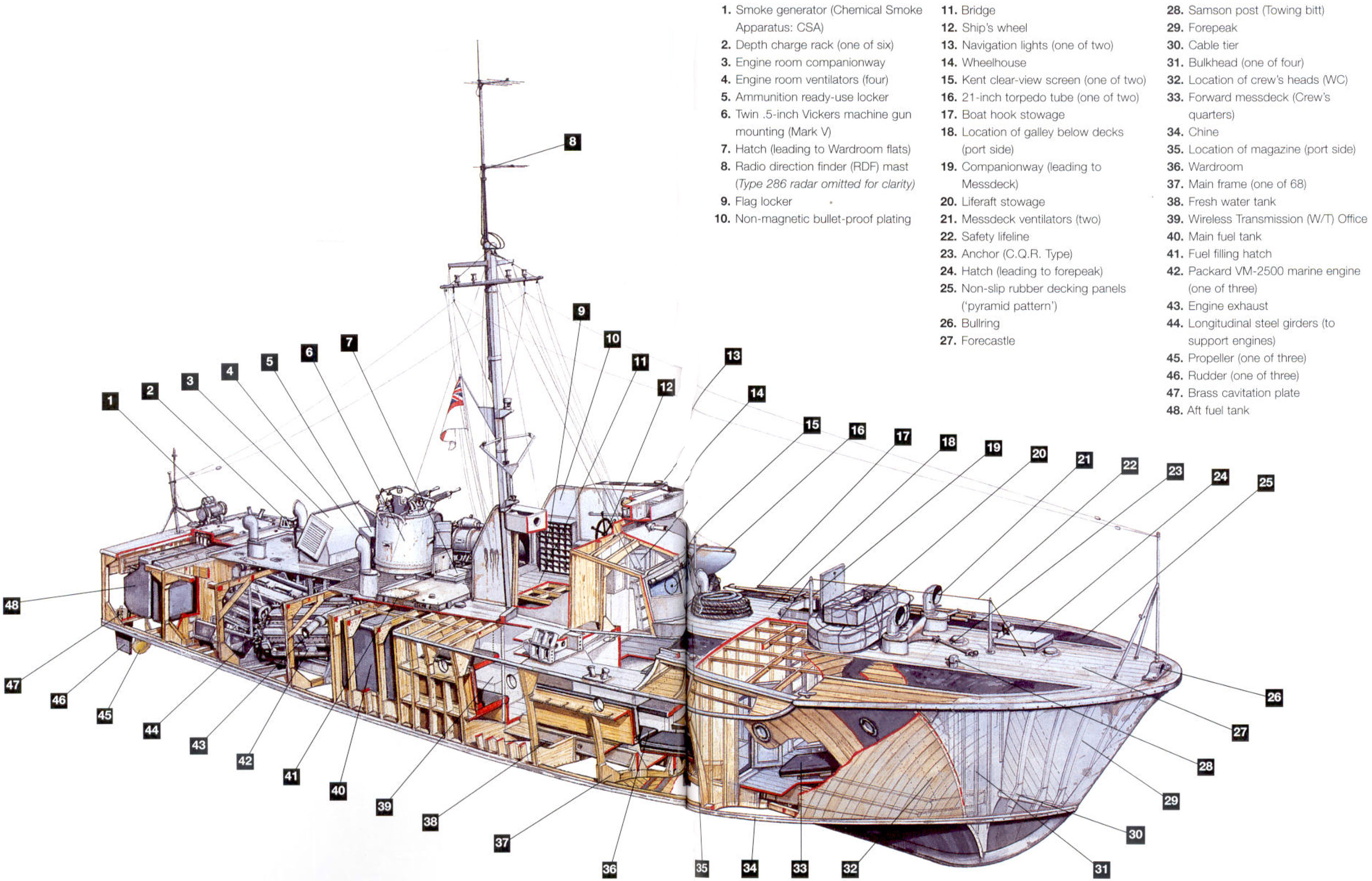 A 72-foot 6-inch Vosper boat built under license by the H. Mclean Yard at Renfrew in Scotland, MTB 223 was ordered from Vosper in February 1941, laid down four months later, and entered service in April 1942. It was one of 48 Vosper 72-foot 6-inch boats ordered during 1941, and incorporated several improvements over the first batch of boats of this size. It is indicative of the growing scale of boat production that Vosper were commissioning boats built in yards as far apart as Scotland, Northern Ireland and Southern England during this period, as well as boats built under contract in American yards. MTB 223 operated as part of the 21 st MTB Flotilla based in the East Anglian ports of Lowestoft, Felixstowe and Harwich from 1942 until 1944.

A 73-foot Vosper Type II boat, the most powerful Vosper MTB of the war in terms of conventional firepower. These boats were initially ordered as Motor Gun Boats (MGBs) in December 1943, and were completed as experimental MTBs. Although similar to the earlier 73-foot Vosper boats ordered in early 1943, the 16 boats of this class carried a 6-pounder QF gun in a power-operated turret forward, a twin 20mm Oerlikon aft, and two twin .303-inch machine guns on either side of the bridge. Unlike the earlier 73-foot boats (Type I), these craft only carried two 18-inch torpedo tubes. 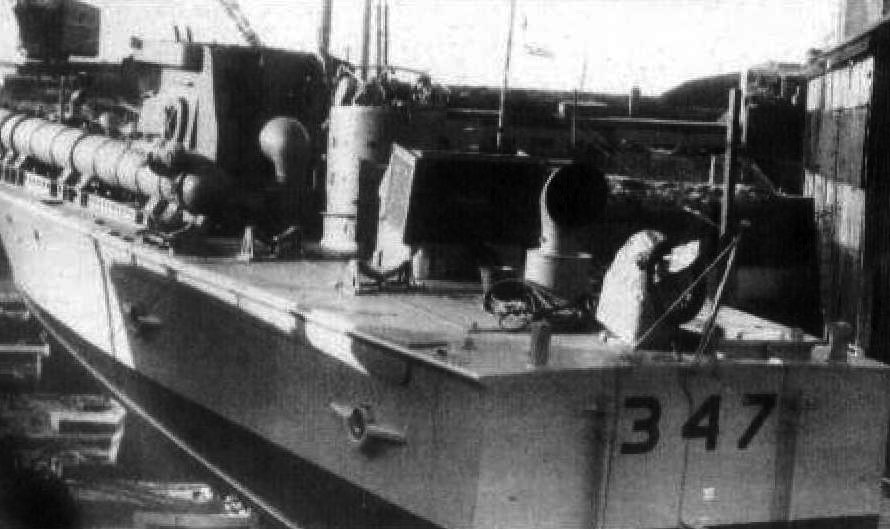 MTB 347 during the final stages of construction at the Vosper Yard in Portsmouth. One of 16 boats of this type, this 72-foot 6-inch was sunk in action against German warships off the Dutch coast in October 1944. (Vosper Thornycroft (UK) Ltd)

MTB 523 was commissioned in July 1945, so, like the other boats of its type, never saw active service. Sold to the Danish Navy in 1949, it was lost in an accidental explosion four years later.

The Electric Boat Company ('Elco') of Bayonne, New Jersey, developed the 70-foot Elco Patrol Torpedo Boat (PT) based on a pre-war design produced by Hubert Scott-Paine. Elco's designer, George Selman, developed the idea still further, and in July 1940 the first 77-foot Elco boats were commissioned by the US Navy. Of these, PTs 49-58 were transferred to the Royal Navy under the Lend-Lease agreement, becoming MTBs 307-316. These slick-looking craft proved their worth in the Mediterranean, where they formed the core of the 15th MTB Flotilla. Armed with two 21-inch torpedo tubes, a twin .5-inch Vickers machine gun mount and a single 20mm Oerlikon, these graceful craft were capable of speeds up to 41 knots. MTB 315 entered British service in March 1942 and was returned to the US Navy after the war. 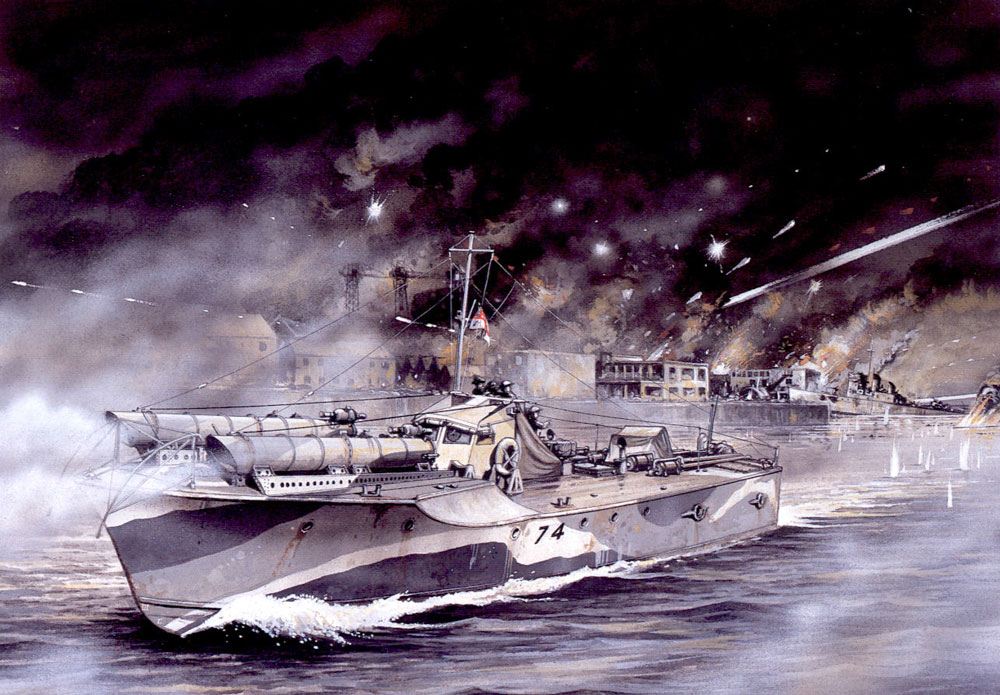 Although MTB 74 was typical of the 70-foot Vosper boats ordered during 1940, it was specially modified during construction, as the Admiralty intended to use it for some nonspecific special operation. The main difference was the mounting of its two 18-inch torpedo tubes on the forecastle, where they would be able to fire over the top of an anti-torpedo net of the type used to protect major warships at the time. The idea was the brainchild of Sub. Lt 'Micky' Wynn, who became its commanding officer. The torpedoes themselves (nicknamed 'Wynn's weapons') were also modified to contain delayed action fuses, designed to explode after a set time on the seabed. MTB 74 entered service in December 1941.

Although Wynn planned to use MTB 74 to attack the German battlecruiser Scharnhorst while it lay at anchor off Brest, the 'Channel Dash' of February 1942 took place before the operation could be planned. Instead it took part in the St Nazaire Raid on 27-28 March 1942, when an amphibious attack was launched on the French port. Wynn fired his delayed action torpedoes at the main lock gates of the port, and after the MTB withdrew, the delayed charges exploded, destroying the lock gates. MTB 74 was badly hit on its departure from St Nazaire and had to be abandoned. 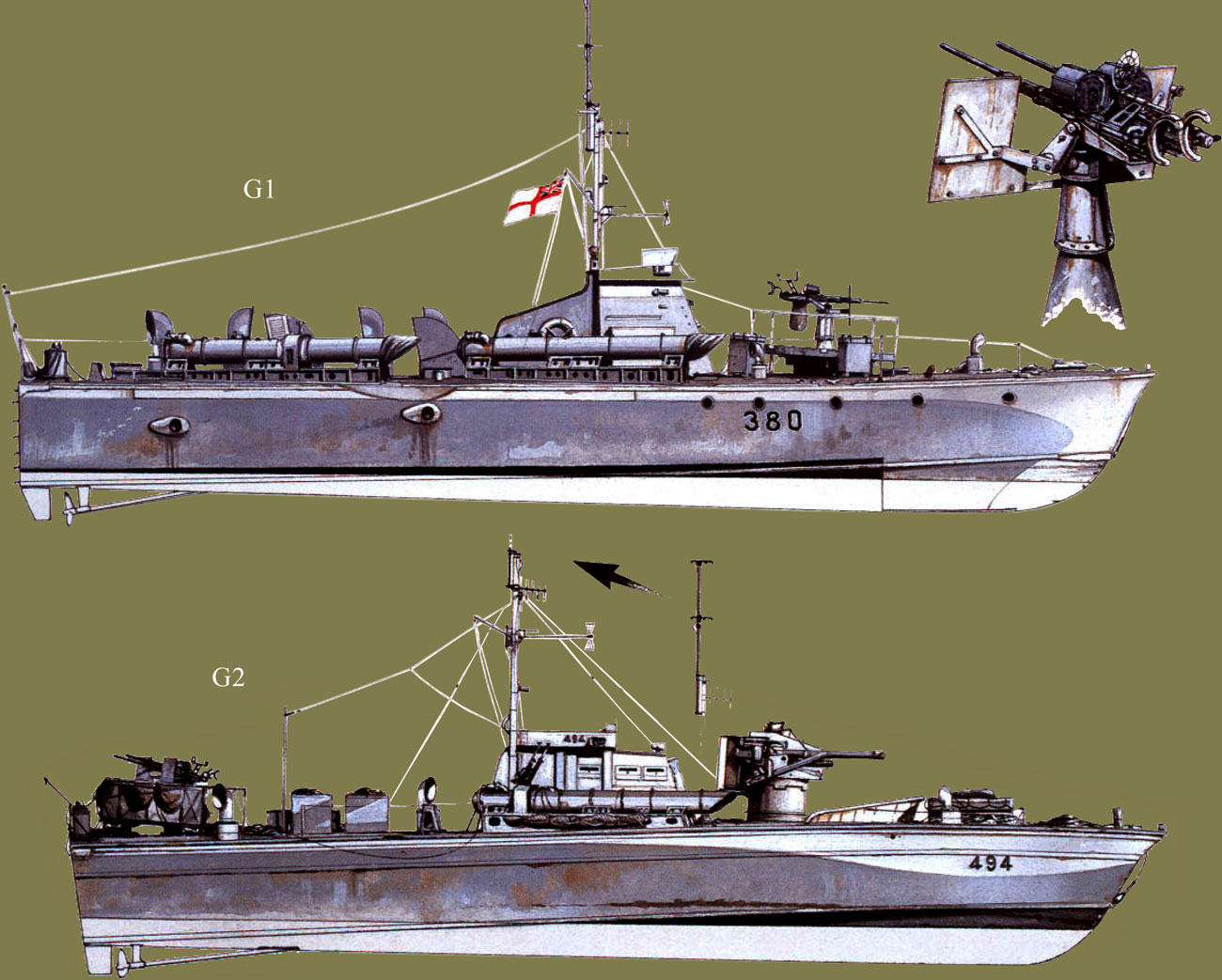 By late 1942 Vosper had developed a boat design representing the culmination of a wartime evolution based on experience and the introduction of new equipment. It was also heavily influenced by the highly successful American designs that had seen service in the Mediterranean since early 1942. A prototype was ordered, then a bulk order for 16 new boats was placed in March 1943. The first of these craft entered service in 1944, including MTB 380, which was commissioned in May 1944. It carried four 18-inch torpedo tubes, a twin 20mm Oerlikon forward (on a manually operated Mark IX mounting - see inset detail), and two twin .303-inch machine guns on each beam. Its bridge and wheelhouse was armoured, and it carried the latest suite of radar sets, radio, inter-ship telephone communications and an emergency steering position on the quarterdeck.

The British Power Boat Company based in Hythe produced a design for a 72-foot MTB, and by 1942 the company won a contract for the mass production of this vessel, of which 78 were produced as Motor Gun Boats (MGBs), and were later converted into MTBs. These BPB designs used Packard engines (capable of a top speed of 42 knots as an MGB and 39 knots as an MTB, at 2.400rpm). While the MGB version carried no torpedoes and mounted a 2-pounder pom-pom, after its conversion into an MTB the same vessel carried two 18-inch torpedo tubes and a 6-pounder gun in a powered turret. These proved highly successful craft, and in both variants the BPB 72-foot boat operated in the English Channel and the North Sea from 1942 until the end of the war. 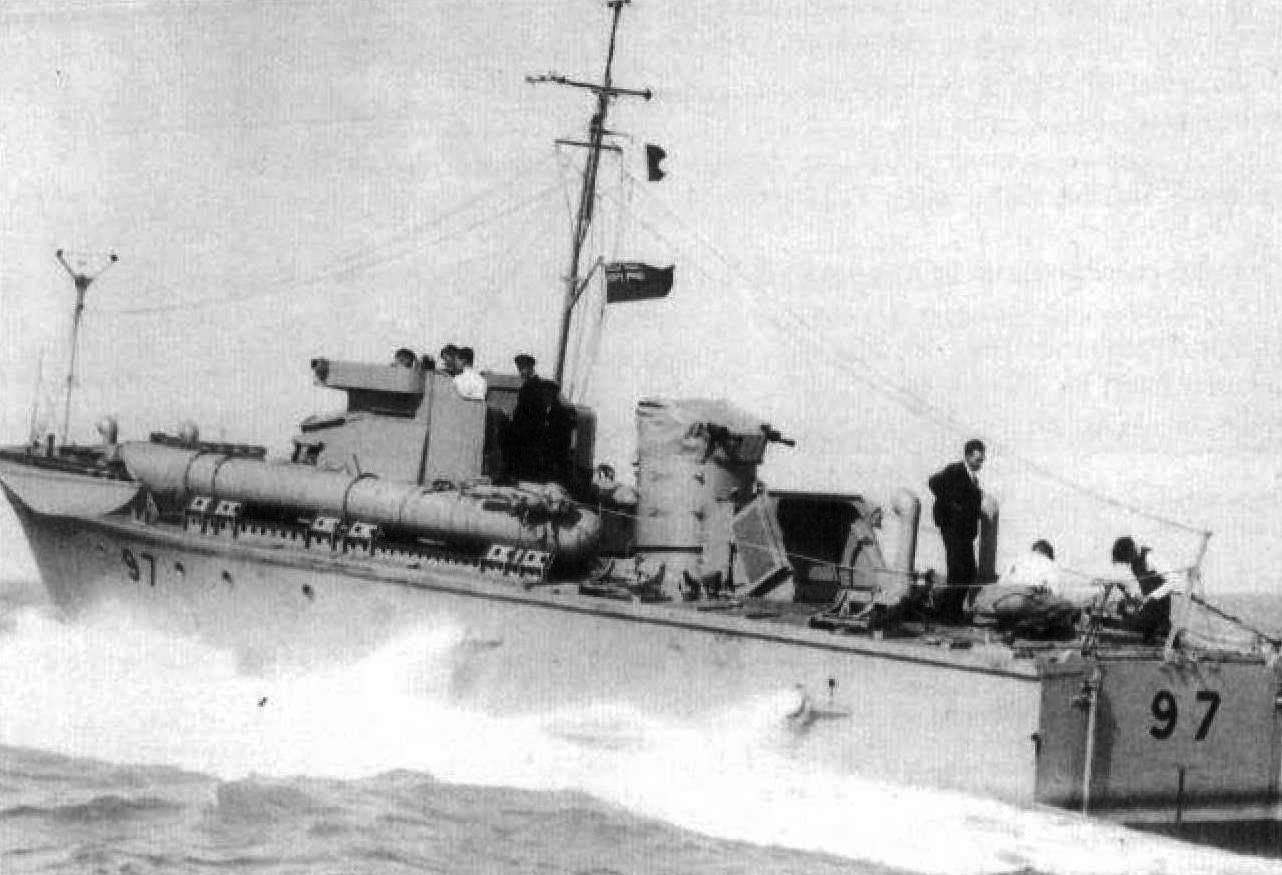 MTB 97, a 70-foot Vosper boat undergoing sea trials in September 1942. Unlike many earlier boats, it was fitted with a Type 286 radar, mounted on a small mast on the forecastle. (Vosper Thornycroft (UK) Ltd)