German Army Group A, virtually abandoned at its bridgehead in the Caucasus since the previous summer, was pulled out to operate on the right of Man- stein's Army Group South, its parent formation. Manstein had recaptured Kharkov in February - against numerical odds of seven to one - but his losses had been staggering. When the Russians took Kiev (6 November) and penetrated his sector, he called for evacuation of the Seventeenth Army from the Crimea. Hitler's characteristic 'No retreat' order was Manstein's reward for months of superhuman effort. Seventeenth Army was cut off in the Crimean Peninsula, just as he had foreseen, and by year's end the Russians had effectively regained all the territory lost in 1942 and more. 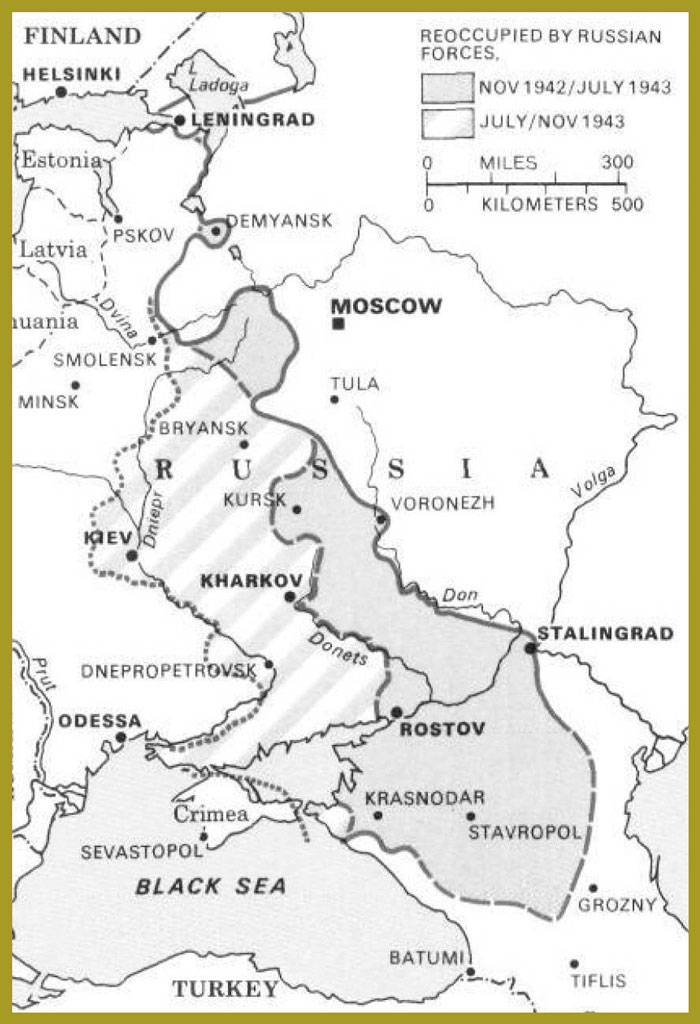 The scope of Soviet reoccupation at their western border. 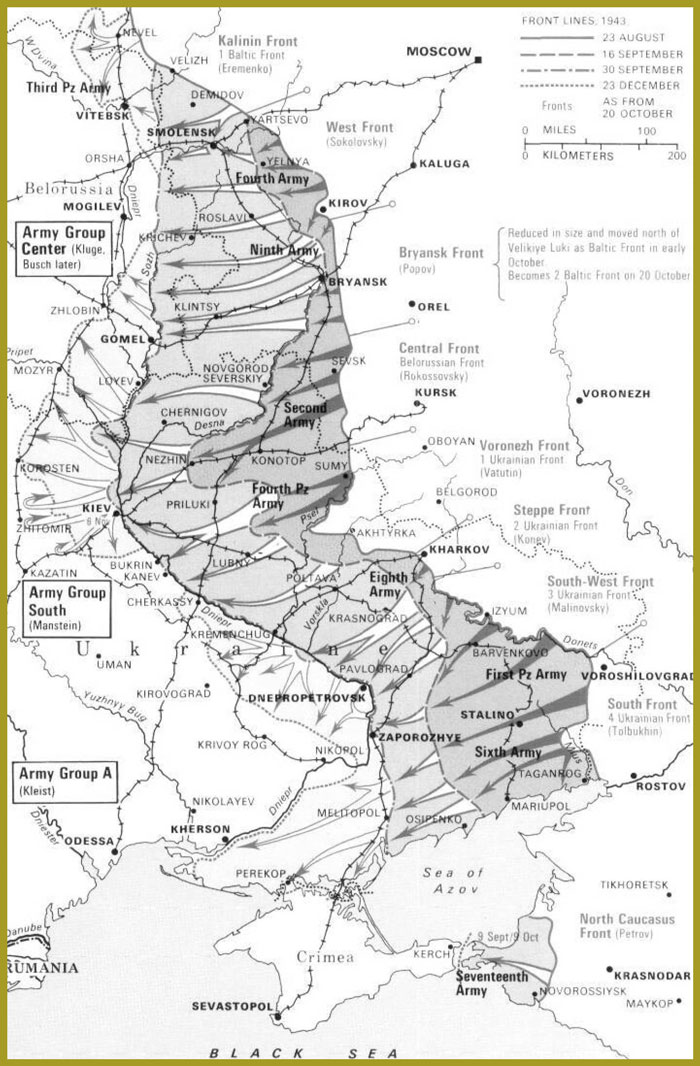 The eventual German withdrawal was made all the more inevitable by the removal of armor and personnel to the Italian Front. 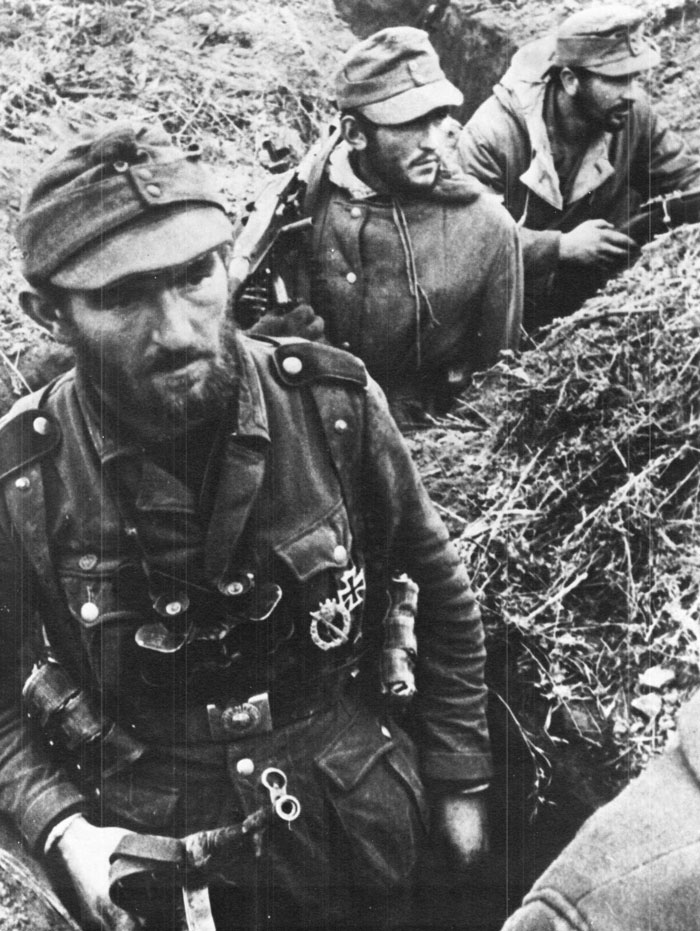 A German NCO leads his infantry section at the front line.

The Relief of Leningrad

Leningrad had been isolated from the rest of Russia since 1941 by the German-held corridor between Tosno and Lake Ladoga. For 900 days its people were deprived of food, fuel and arms; by the end of the siege, they were dying of hunger and cold at the rate of 20,000 a day. Throughout this ordeal, Leningrad's citizens continued to produce goods in their factories, even at greatly reduced levels, and to provide for civil defense. A trickle of supplies began to arrive in January 1943, thanks to a concerted effort by the Leningrad and Volkhov Fronts to secure a supply line south of Lake Ladoga. It was little enough, but it prevented total starvation. Not until a year later did real relief reach Leningrad.

In mid-January 1944, three Russian Fronts - Leningrad, Volkhov and 2 Baltic - launched attacks against German Army Group North, commanded first by Küchler and after 29 January by Field Marshal Walther Model. By that time the Russians had cleared the Moscow- Leningrad Railway and recaptured Novgorod. Now threatened by encirclement, Model withdrew Army Group North east of Lake Chudskoye and subsequently stopped the Soviet advance into the Baltic States. Beleaguered Leningrad was restored to the Soviet Union. 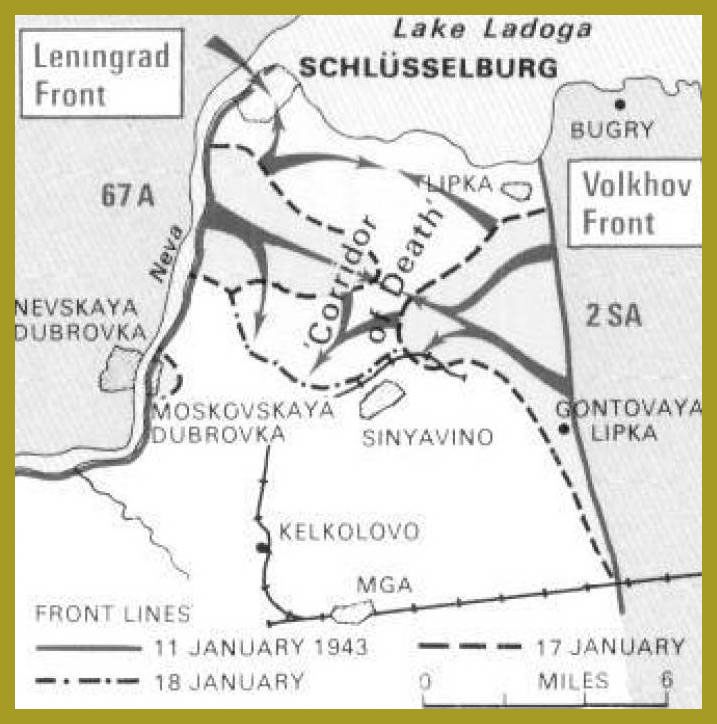 Supplies reached Leningrad in limited quantities through the so-called 'Corridor of Death'.

The earlier division of the Leningrad and Volkhov Fronts. 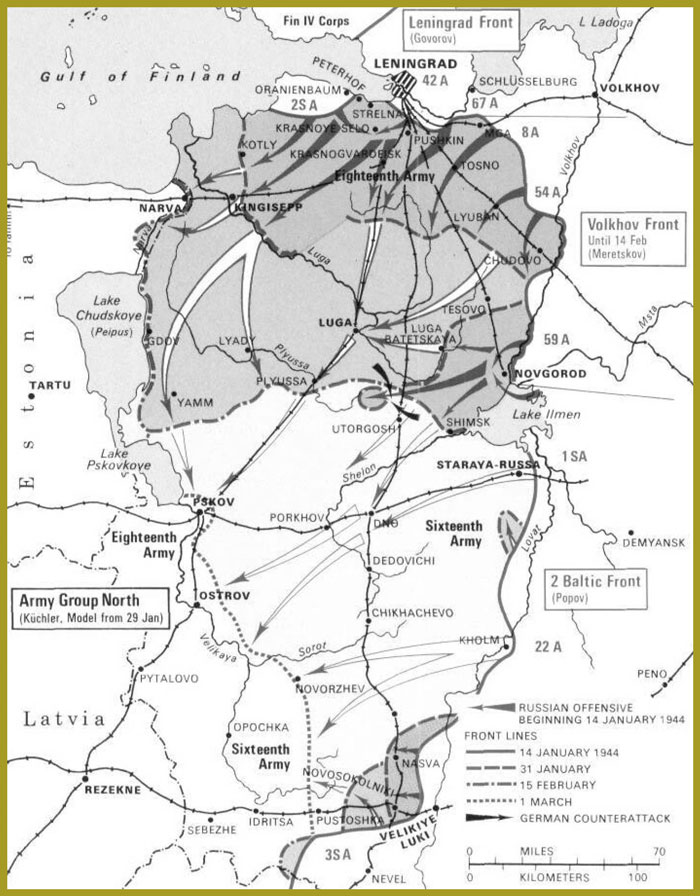 Final relief of the siege was achieved early in 1944. 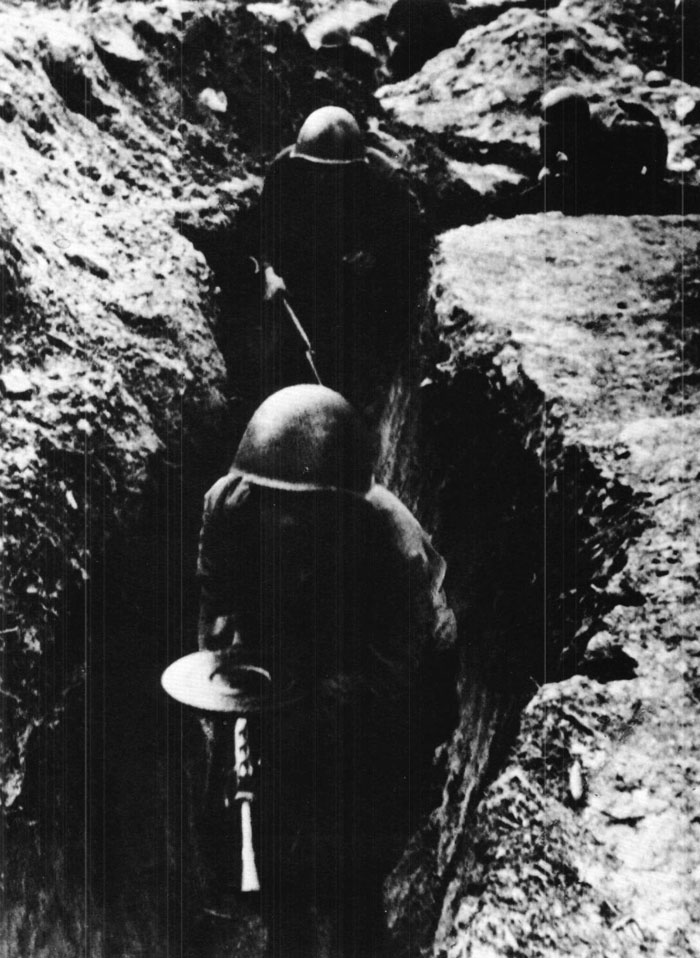 Defenders dig in at Leningrad's perimeter.

During the drive to relieve Leningrad, Russian forces in the south were equally active. The 1 and 2 Ukrainian Fronts launched attacks on all German forces in the Ukraine between 24 December 1943 and 5 January 1944. German First Panzer Army was trapped, and both Manstein's Army Group North Ukraine and Kleist's Army Group A were hard pressed. Manstein tried to counterattack under blizzard conditions, but could do little to slow the Russian advance to the Rivers Bug and Dniestr.

An improvised airlift kept First Panzer Army supplied until it could fight its way out behind Russian lines. German tenacity in south Russia at this time was almost unbelievable, but it was a losing fight. Kleist had to fall back to Odessa, leaving elements of Sixth and Eighth Armies surrounded. On 10 April he was forced out of Odessa, and the Russian front was extended almost as far as Brest-Litovsk.

The last rail link between the Germans in Poland and those in southern Russia had been severed in March with the capture of Chernovtsy by First Ukraine Front. The abandoned German Seventeenth Army was driven from the Crimea, and Sevastopol fell to the Soviets on 12 May.

Hitler was enraged by the losses in the Ukraine, whose rich mineral resources were desperately needed by the Reich. Instead of rewarding Manstein's heroic role there, he relieved him of his command and put the trouble-shooting model in his place. Kleist was ousted in favor of the ambitious Field Marshal Friedrich Schörner. 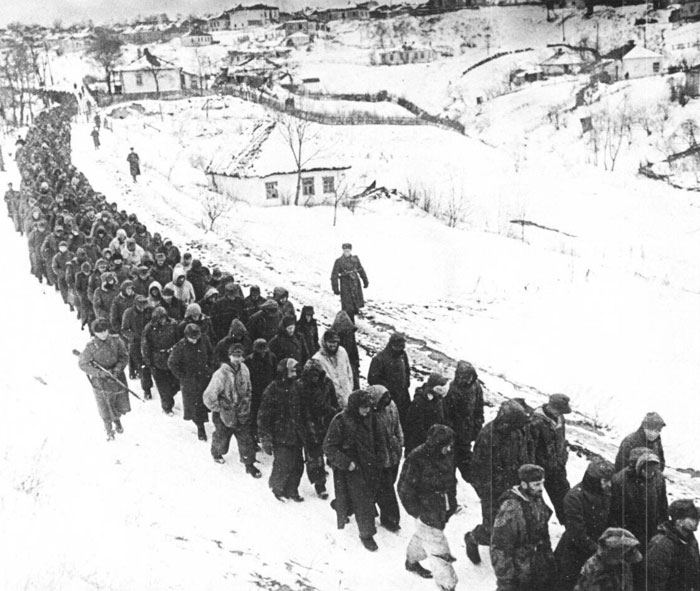 A column of Germans captured near the pocket of resistance at Korsun-Shevchenkosky. 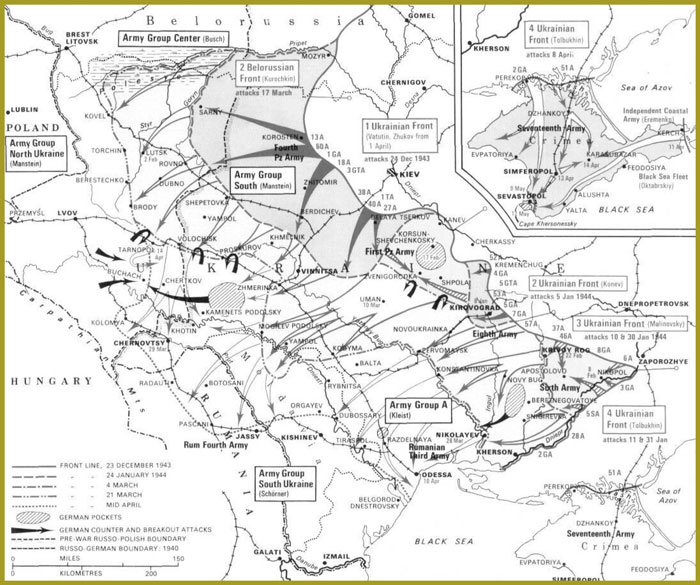 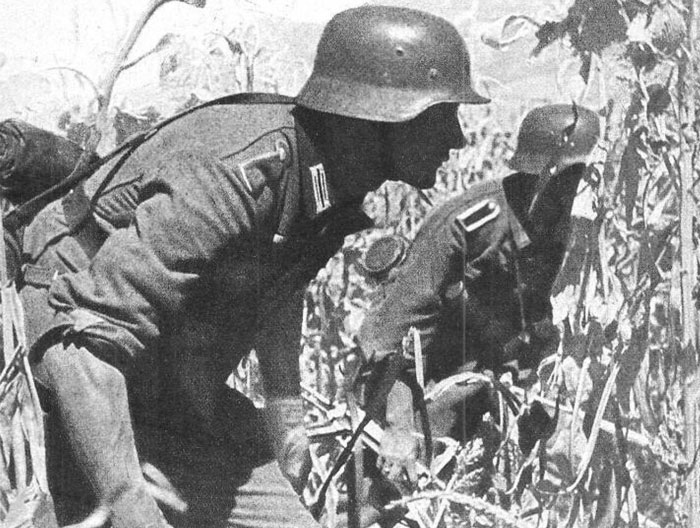 German soldiers advance through the maize fields of the Ukraine.

From Warsaw to the Oder

Early summer of 1944 found widely scattered German forces trying to hold a 1400-mile Eastern Front with very few reserves. On 23 June the Soviets struck along the central sector with three fronts under overall command of Marshal Georgi Zhukov, now deputy supreme commander in the USSR. With a density of almost 400 guns per mile, these troops assaulted General Busch's Army Group Centre just as partisan activity in its rear disrupted communications entirely. There was no contest in the air, as many Luftwaffe units had already been taken west. Busch lost half a million men, killed or captured, from his 33 divisions and was replaced by Model immediately. By the end of August, Zhukov's offensive was at the gates of Warsaw - in the the north, at Riga. Model barely succeeded in preventing the Russians from entering Warsaw; their own pause to resupply outside the city was providential for him. Farther south, Soviet troops had crossed the Vistula for a combined advance of 450 miles in two months. Operations had to be suspended until supply lines could catch up.

By January 1945 the Russians were poised to invade Germany for the first time since 1914. Rokossovsky's 2 Belorussian Front of nine armies assaulted the German Second Army north of Warsaw, while the Russian Forty-seventh Army encircled the city, which fell on 17 January. Army Group Centre was driven back into a few pockets along the Bay of Danzig, from which the German Navy extricated some half a million men in March and April. On 9 May the last German beachheads surrendered.

As Rokossovsky attacked north of the Vistula, the 1 Belorussian and 1 Ukrainian Fronts advanced at top speed on a wide front from Warsaw to Jasto. They had reached the Oder by 31 January, bypassing pockets of German resistance. Russian armies of over 1,500,000 men confronted German forces of 596,000, with still greater inequalities in armaments and aircraft. By 24 February Pomerania and Silesia had fallen, giving Soviet forces a solid front along the Oder less than 40 miles from Berlin. Only one sizeable German force would be left in Europe after the fall of Berlin: Schörner's Army Group Centre, which had moved into Czechoslovakia. The Russian 'liberation' of that country would be a microcosm of what transpired in Eastern Europe after the German defeat. 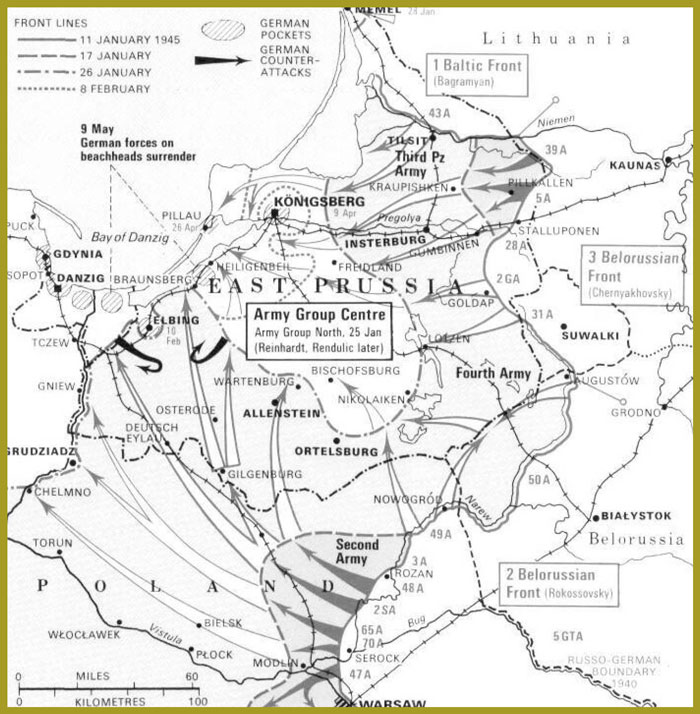 The frontiers of German occupation are pushed back. 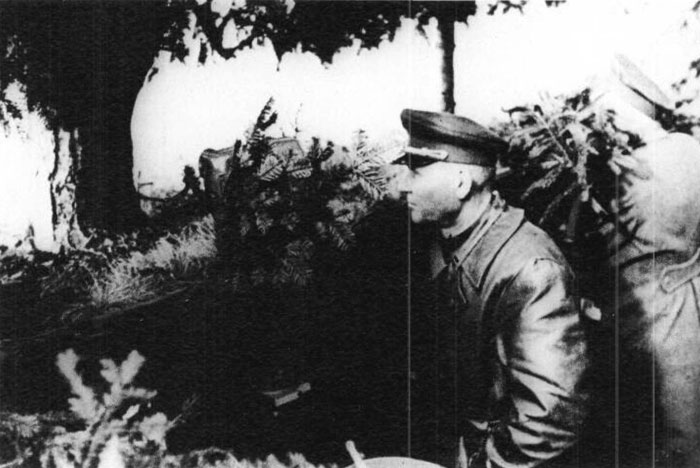 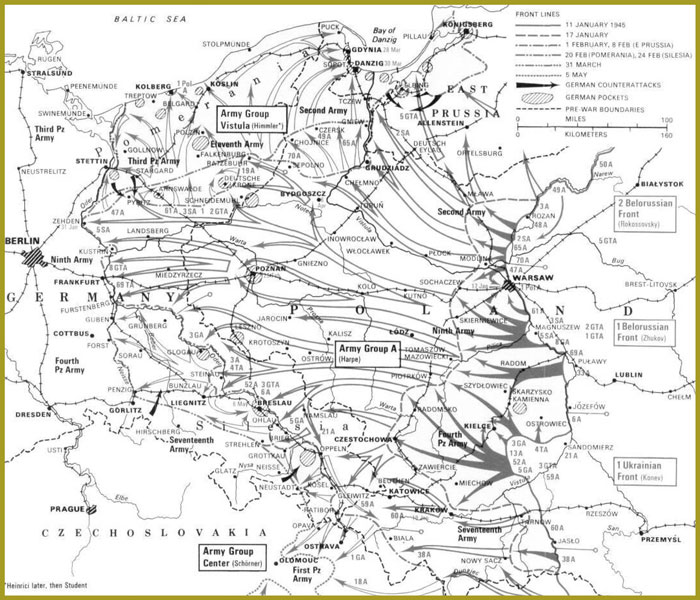 Russian forces halt at the Oder prior to the final push to Berlin.

Troops of 4 Ukrainian Front plod over the Polish Carpathians in the winter of 1944-45.

The Drive into Czechoslovakia

Desperate Nazi plans focused on the formation of a 'national redoubt' on the German/Czechoslovak border after the fall of Berlin. These plans were based on Schörner's amies of almost a million men, which held the Reich's last important industrial area. In reality, however, their situation was hopeless, surrounded as they were by the Russians on three sides and with Patton's US Third Army approaching from the west.

By 6 March 1945 the Russians had already overrun much of Slovakia, and two months later they held over half the country. Czech partisans in Prague and other cities disrupted German communications and harassed German forces in every way they could. On 8 May a concerted Russian offensive attacked from north, south and east, and Prague was liberated the following day. US Army closed the circle on 12 May along a line from Karlovy Vary to Linz. Schörner surrendered with all his forces, five days after the formal surrender of Germany. 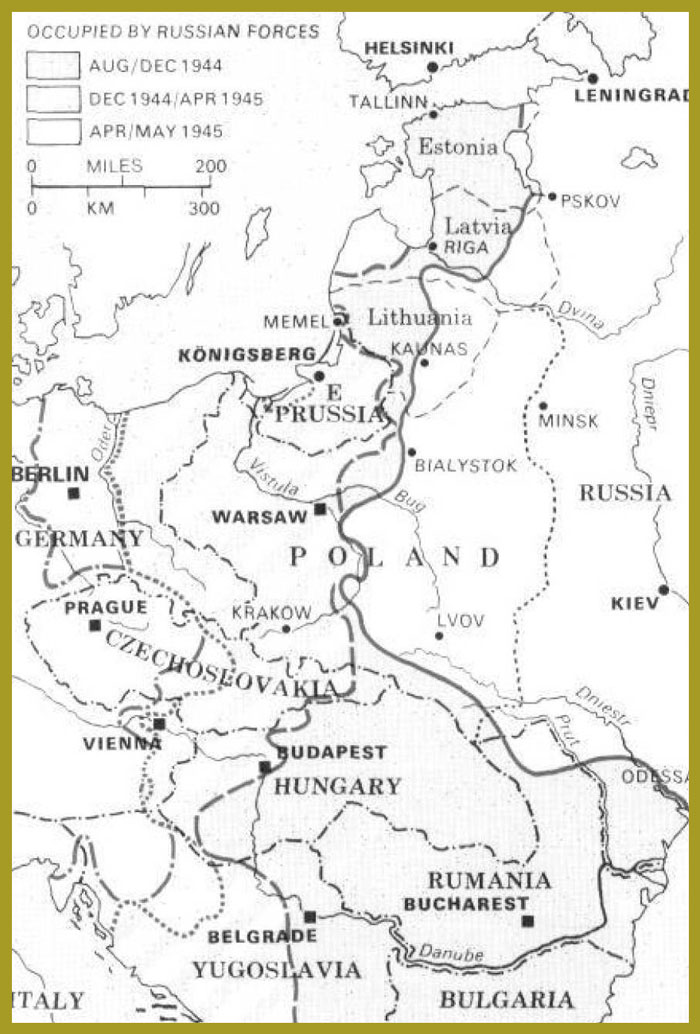 The Allies drive into Czechoslovakia from all directions. 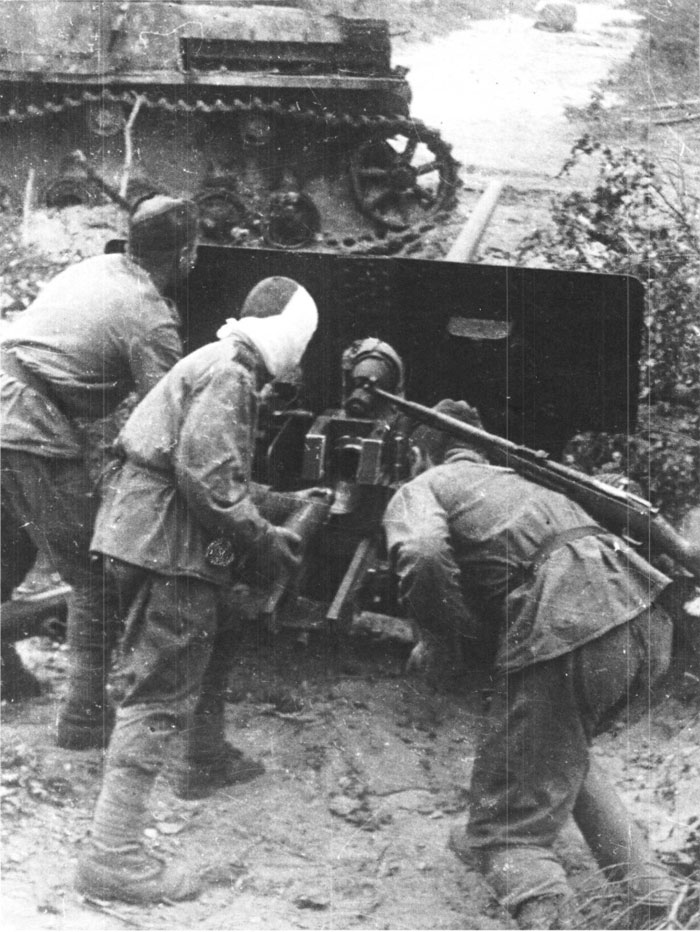 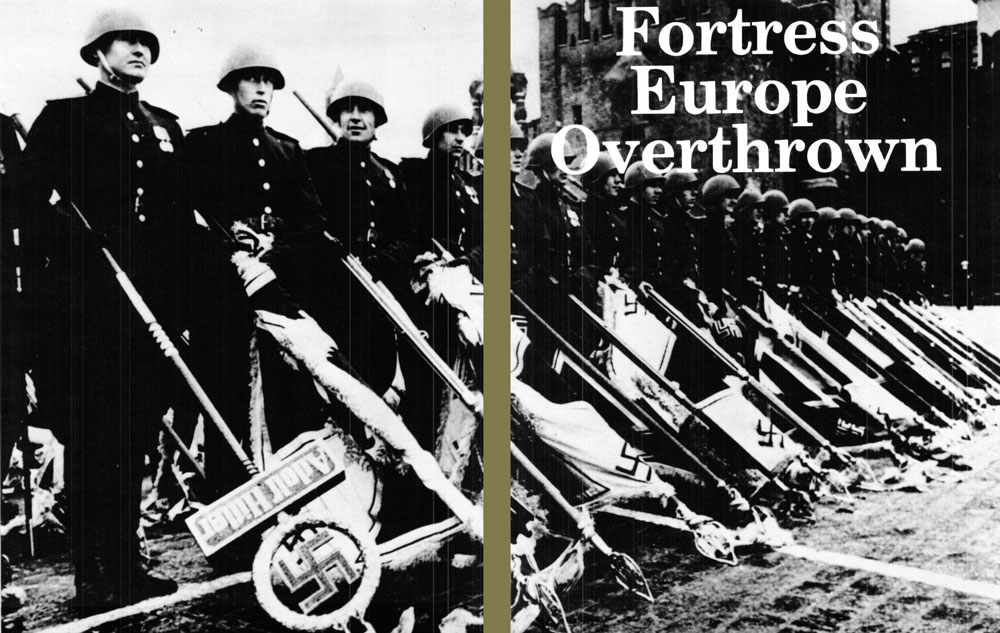 The Bomber Offensive on Germany

Allied air raids on Germany began as early as 1940, but it was not until late 1943 that the bombing offensive became systematic and widespread. At that time American 8th Air Force units joined the RAF Bomber Command in force, and several months later an increasing range of escort fighters allowed deep penetration raids over the whole of Germany. RAF Bomber Command concentrated on night bombing of German cities, while the US 8th Air Force, with fewer planes, targeted specific military installations by day. 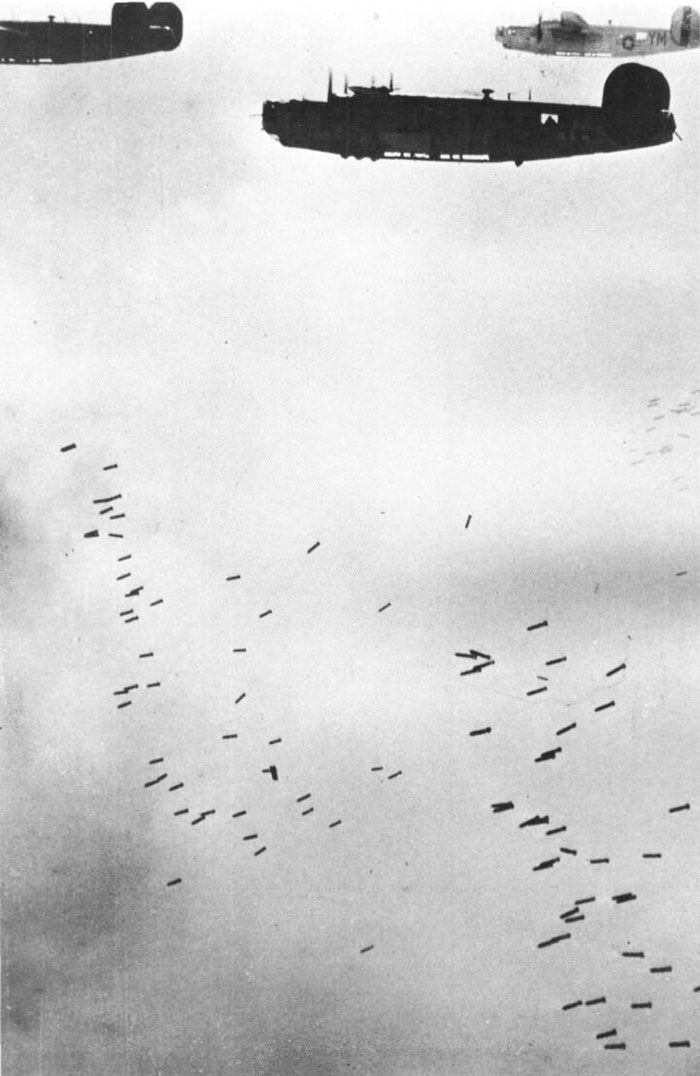 B-24 bombers of the USAAF continue their daylight raids on the Reich. 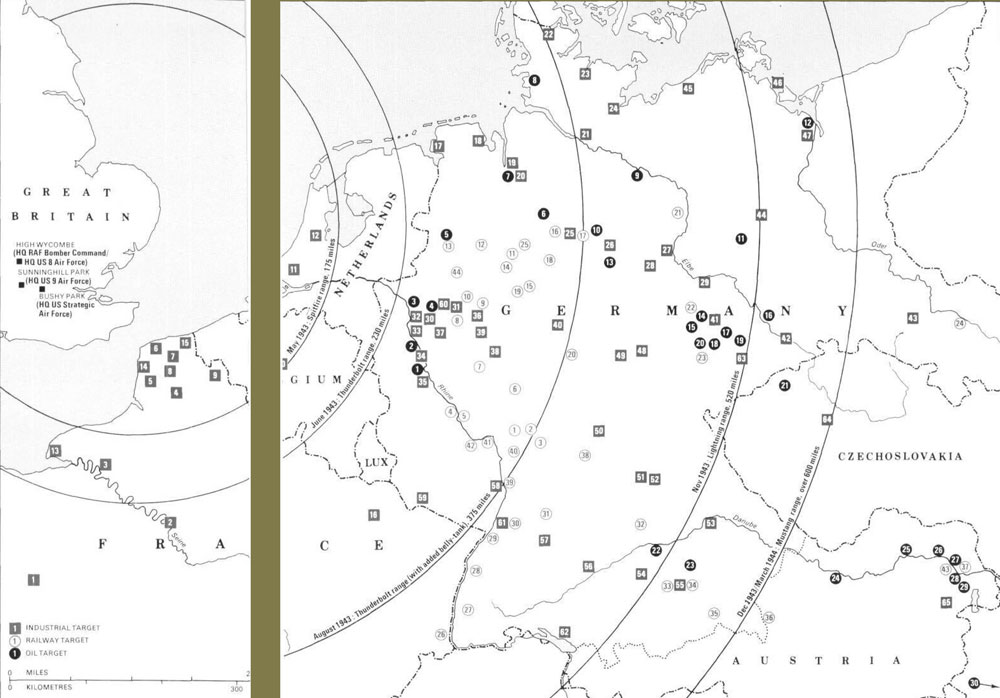 The ever-expanding operational range of US escort fighters ensured that yet more bombers would hit the target.

Prior to this, several historic raids had been made, including the first '1000- bomber' raid on Cologne (31 May 1942), which destroyed half the target area. Three months later, US 8th Air Force dispatched 12 Flying Fortresses against the marshalling yards near Rouen. Damage was slight, but no American planes were lost, and this raid set the pattern for US concentration on precision bombing in daylight hours.

The night of 18-19 November 1943 brought the first of sixteen major raids on Berlin, where serious damage was inflicted with loss of only nine RAF aircraft. With the arrival of escort fighters in spring of 1944, the 8th Air Force attacked the Erkner ball-bearing factory in Berlin, disrupting production considerably at a cost of 37 planes. Three weeks later, the RAF struck Nuremberg with almost 800 aircraft, causing some relatively minor damage but losing 95 bombers in the process; 71 others were damaged. The British abandoned area raids on distant objectives after this resounding failure.

The most controversial raid of the war in Europe was that on Dresden (13-14 February 1945). Estimates of civilians killed in this raid ranged from 35,000 to 135,000. Over 1500 acres of the beautiful and historic city - of no military value whatever - were destroyed. The first devastating fire bombing was carried out by 805 Bomber Command aircraft, with the loss of only eight planes. The following day, 8th Air Force bombers overflew the city again.

At the 1943 Trident Conference in Washington, Allied leaders made their plans for the invasion of Europe - Operation Overlord - during the coming year. France was selected as the target of a cross-Channel assault, with beachheads to be established in Normandy between Cherbourg and Le Havre. This area was within easy reach of fighter bases in southern England and represented the shortest possible route for a massive amphibious operation, excluding the Pas de Calais. Since the Allied invasion was expected in the latter area, the Normandy beaches would be less heavily defended.