At this juncture, it is worth also mentioning recruitment into the SS-Verfügungstruppe (SS-VT), the forerunner of the Waffen-SS, which would eventually field some of the Second World War's most powerful armoured divisions. Enlistment into the SS-VT was entirely voluntary. The Wehrmacht jealously guarded its status as the nation's Waffenträger (sole bearer of arms) and did all it could to ensure that the expansionist aims of Reichsführer-SS Heinrich Himmler were held in check. One important concession granted was that service in the SS-VT was to be considered as having fulfilled the individual's obligation for compulsory military service, thus, in some ways at least, equating service in the SS-VT to service in the Wehrmacht.

At this point in time, prior to the outbreak of war, there existed no SS Panzer units as such, but it is worth noting that many of the war's top Panzer aces were from the Waffen-SS and had joined the SS-VT in these early days. Recruitment into the SS-VT was very selective, and it is interesting to note some of the qualifications for service in the military branch of the SS. The following information is taken from an original wartime recruiting leaflet entitled Wie komme ich zur SS-Verfügungstruppe (How do I join the SS-VT?).

(ii) be physically fit for service in the SS.

(iii) have an acceptable political outlook.

(iv) provide evidence of Aryan ancestry back to 1800.

(v) be neither married nor engaged to be married.

(vii) have parents' written permission if at the minimum entry age of 17.

(viii) if undergoing professional training such as an apprenticeship, to have completed the course or obtained a release from the appropriate supervisor.

(ix) pay for any dental treatment required to bring the applicant up to standard before enlistment.

(x) have good eyesight without glasses.

(xi) have no criminal record, or criminal proceedings pending. 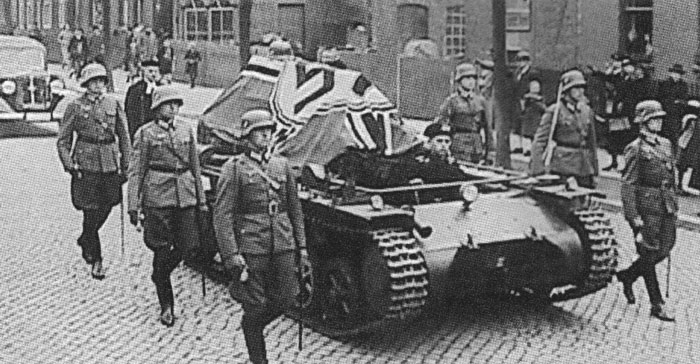 The special version of the Panzer I used for tank driver training also had other uses. Here it is used as a fully tracked hearse as the Panzerwaffe says farewell to one of its own. (Wade Krawczyk)

In general terms, recruitment into the Panzerwaffe was done on a geographical basis. Recruits who joined or were conscripted in a particular area were likely to end up in the local unit. However, this was not a universal policy, and in each local unit there would also be a scattering of individuals from other parts of the Reich. The principal demographic mix in each Panzer division would be roughly as shown in the following chart. The chart indicates the number or name of the unit, the date ii was either founded or was converted into a Panzer division, its controlling Wehrkreis and home town where appropriate, and the area from which it drew most of its personnel, again if a specific region was predominant.

There are a small number of important Panzer units that deserve separate mention because they differed, in many ways, particularly in their recruitment procedures, from more conventional units that were organised around regional links.

This extremely powerful and important unit had its origins in the elite Berlin Guard regiment. In 1936 the then commander-in-chief of the army, Generaloberst Werner von Fritsch, required each army unit to send the men best trained in drill movements to serve with the Guard, which performed numerous guard and ceremonial duties in the Reichshauptstadt, Berlin. The regiment wore a distinctive shoulder strap cipher, the Gothic letter 'W' (for 'Wache'). In June 1939, von Fritsch's successor Generaloberst Walter von Branchitsch renamed the Guard Regiment Infanterieregiment 'Grossdeutschland', bestowing on the unit its own cuff band and shoulder strap cipher 'GD'. Continuing the policy of recruiting only the finest men, Grossdeutschland signed up men from every corner of the Reich. The unit grew to divisional size (and ultimately into a Panzerkorps) and was designated a Panzer division in 1943.

Based in Danzig, this unit's associations were political rather than regional. The division was closely linked to the elite Feldherrnhalle Standarte of the SA storm troopers and indeed wore die same cuff band, on SA brown material. The unit shoulder cipher was die so-called SA Kampfrune, and even the unit banner was the Party's Deutschland Erwache style swastika banner, rather than the traditional army standard bearing the Iron Cross and Wehrmacht eagle. The unit was expanded from regimental size, achieving divisional status as 60 Panzer Grenadier Division Feldherrnhalle in 1944. Within the division, the armoured element was 160 Panzer Battalion 'Feldherrnhalle'. A second division, this time of Panzer division status, was raised in 1945 with cadres from 60 Panzer Grenadier Division and known as Panzer Division Feldherrnhalle (2). The two divisions formed Panzerkorps Feldherrnhalle.

The origins of this massive formation lay with an obscure pre-war Prussian police detachment (at the time, Hermann Göring was Prussian Minister of the Interior). It was upgraded to a regiment in 1935 and transferred to the Luftwaffe in October of that year. Enlarged once more, this time to brigade size in July 1942, within just three months it had increased in size again to divisional status.

This was the elite unit of the SS, and it had its origins in Hitler's personal bodyguard. By the outbreak of war in 1939 it had reached the status of a motorised infantry regiment and served in this capacity in the Polish campaign. It attained divisional size in November 1942, and it converted to Panzer division status in October 1943. The Leibstandarte recruited throughout Germany and only the highest quality candidates were accepted. Hitler is said to have insisted, 'My Leibstandarte will accept no one who is not the best that Germany can offer!' Recruits had to be at least 6ft 1½ ins tall, of the highest possible standards of physical fitness, of traceable Aryan ancestry back to 1800 for other ranks and 1750 for officers, no criminal record and even his physical features had to match Himmler's standards for Nordic appearance. Recruits signed on for four years in the ranks, extending to 12 years for NCOs and 25 for officers.

On receiving his call-up notice and reporting for duty, the prospective Panzer soldier underwent the basic military training common to all German soldiers. Most recruits had already been involved with the compulsory state labour programme or the Hitler Youth, so they generally came into the army with a better awareness of the realities of military life than recruits in other countries.

A typical German recruit would have already learned the significance of military rank structures and basic: drill movements, he would be extremely fit and he would also be accustomed to wearing uniform. 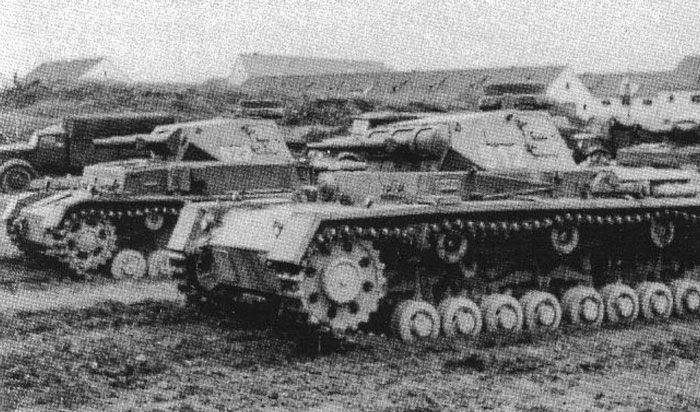 Panzers on the training grounds. Although at first glance these rare vehicles look like Panzer IVs with eight roadwheels, they are in fact Panzer IIIbs, of which only 15 were built, in 1937. Later versions of the Panzer III had only six roadwheels. (Robert Noss) 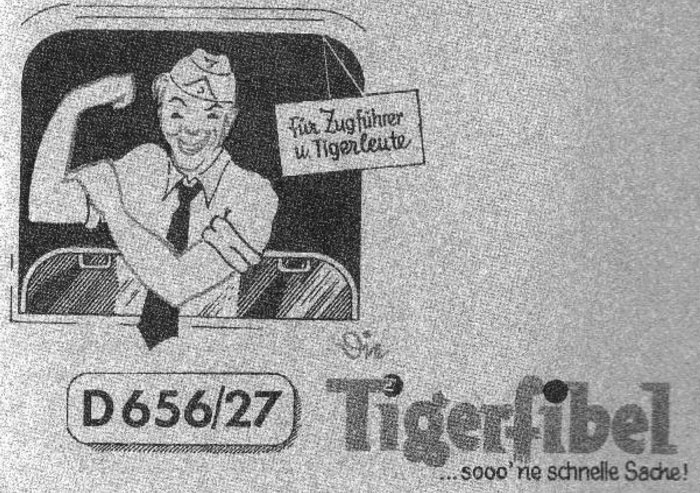 The front cover of the Tigerfibel, the training manual for the legendary Tiger tank.

Throughout all of the civil and paramilitary organisations of the Third Reich, sport was given the highest possible profile. As a result, recruits had a good standard of general fitness and could spend their time on military training rather than on PT. Nevertheless, basic military training would be no picnic. Basic training equipped the recruit for combat service and, in addition to familiar exercises such as drill movements and firearms training, exercises under live fire were widely used. In the German armed forces, unlike in many other armies, soldiers were encouraged to use their initiative; thus if an NCO or squad leader was killed or injured, a junior rank would have the skills and confidence required to take over.

Even for tank crews, basic infantry training was essential. If a vehicle was knocked out or disabled, the crew would have to fend for themselves, and in the event, many of them did so admirably. Photographs show a surprisingly large number of Panzer soldiers wearing the Close Combat Clasp, awarded for hand-to-hand fighting.

On completion of his basic infantry training, the recruit commenced specialist Panzer training. From the beginning, Guderian had favoured highly structured training. First the individual would receive his own training, then the various crew members would come together and exercise as a team. Trained crews would take part in unit level exercises and finally the units themselves would be involved in large-scale manoeuvres.

Guderian had immersed himself in studying tank tactics during the 1920s, and in 1931, having been given command of 3. Kraftfahrabteilung in Berlin, he set about putting his theories into practice. His transport unit made dummy hardboard superstructures that were fitted over the bodies of light cars to give the appearance of a tank. As a result, by the time the first Panzer Mk Is rolled oil the production lines, training of tank crews, at least in tactical exercises, was already underway.

Finally, in November 1933, Panzer training proper began, with the establishment of a new training school, the Panzertruppen-Schule at Wunsdorf-Zossen. The school was eventually split to form two new schools: Panzerschule 1 at Bergen, which specialised in training tank and anti-tank personnel; and Panzerschule 2 at Potsdam-Krampnitz, where Panzer grenadiers and Panzer reconnaissance troops were trained. In addition to basic tank training, specialisation courses were run for Panther crews at Erlangen training grounds and Tiger crews at Paderborn training grounds. For most of the war, NCO training for tank crews was carried out by the Feld-Unteroffizier-Schule near Warsaw in occupied Poland.

At the outbreak of the Spanish Civil War, Germany dispatched a number of its light 5-ton Panzerkampfwagen Is to support the Nationalist cause. Although the German personnel who accompanied the tanks were intended to train Spanish crews for the tanks rather than crew them themselves, once the training had been completed, the German crews were also permitted to go into action. Thus the Panzerwaffe, in the days leading up to the outbreak of the Second World War, had the priceless opportunity to test themselves, their tactics and their vehicles in action. They learned many valuable lessons in the process.

In September 1937, the first large-scale tank training manoeuvres were held around Neustrelitz in front of a high-ranking audience, which included the Italian dictator Mussolini. By the outbreak of war, it was clear to the Germans that their Mk I and Mk II Panzers were hopelessly under-gunned, the former having only machine guns and the latter only a 2-cm cannon. Nevertheless, these vehicles would form the backbone of the Panzertwaffe during the attack on Poland.

More suitable for modern warfare were the Panzer III at 20 tons, and the Panzer IV at 25 tons. The Panzer III was the more numerous, though it had only a 5-cm gun. The heavier Panzer IV with its short-barrelled 7.5-cm gun was intended for the infantry support role, though it would later develop into a line medium tank and the most numerous of all types of Panzer. It soon became clear that in many ways, the Panzer crew closely resembled the crew of a U-boat. A small team, each dependent on his crewmates, lighting within an enclosed steel environment. As with the U-boats, it was essential that each Panzer crewman had a working knowledge of the skills required for each job within the crew in case one of his comrades was killed or injured. The loss of any one crewman (typically, medium tanks would have a crew of five) could seriously impair or even totally negate the tank's fighting ability if a colleague could not step in and fill the breach.