The British Army was the first military force to make successful use of what was to become universally known as 'the tank'. The effect of the 28-ton Mk I vehicles sent into action at Flers in September 1916, however, was more psychological than actual, as many became bogged down in mud or in craters, and the attack drew scorn from the many detractors of the new weapon. The attack on the German positions at Cambrai in November 1917 was far more successful, with tanks for the first time used as a breakthrough weapon in their own right rather than merely providing infantry support. The degree of success was greater than had been anticipated, but mechanical breakdown, combat losses and the lack of sufficient reserves to exploit the progress made by the tanks, prevented even greater glory.

The Germans were startled by the early achievements of Britain's tanks and began rapid development of their own. The result was the 32-ton A7V, which was armed with a 5.7-cm gun and manned by a crew of 18. A TVs, along with a number of captured British tanks, were sent into action at Villers-Bretonneux in April 1918. It was the world's first tank-versus-tank engagement, but poor mechanical reliability and lack of sufficient trench-crossing capability once again mitigated against any significant achievements.

The rapidly deteriorating military situation saw the war end before German tank development could provide its armies with a truly effective battle tank.

Germany's post-war military strength was greatly diminished, with the new Reichswehr restricted to a size of just 100,000, but while manpower had been reduced, events at Cambrai had revealed the true potential of the tank for the future. Hauptmann Heinz Guderian was particularly keen to ensure that the vanquished Germans focused their military redevelopment around the tank, albeit in a new role. Guderian could see that the concept of the tank as a heavy, slow-moving, fire platform, advancing at only the pace of the infantry it supported would never see its full potential realised.

Through the 1920s Guderian studied tank tactics, and in 1931 he was appointed to command 3. Kraftfahrabteilung in Berlin. It was whilst in command of this unit that Guderian devised the idea of dressing up ordinary vehicles with mock tank superstructures and turrets made from cardboard and plywood in order to cany out basic tank training exercises. Guderian's big break came after the accession to power of Adolf Hitler and the National Socialists, Hitler took a keen interest in tank warfare, and after seeing a demonstration at the Rummersdorf training grounds in October 1934 he became an avid supporter of the foundation of a tank corps for the German Army. With Hitler as an ally Guderian's star was firmly in the ascendant, despite the dissenting voices of traditionalists within the German Army. 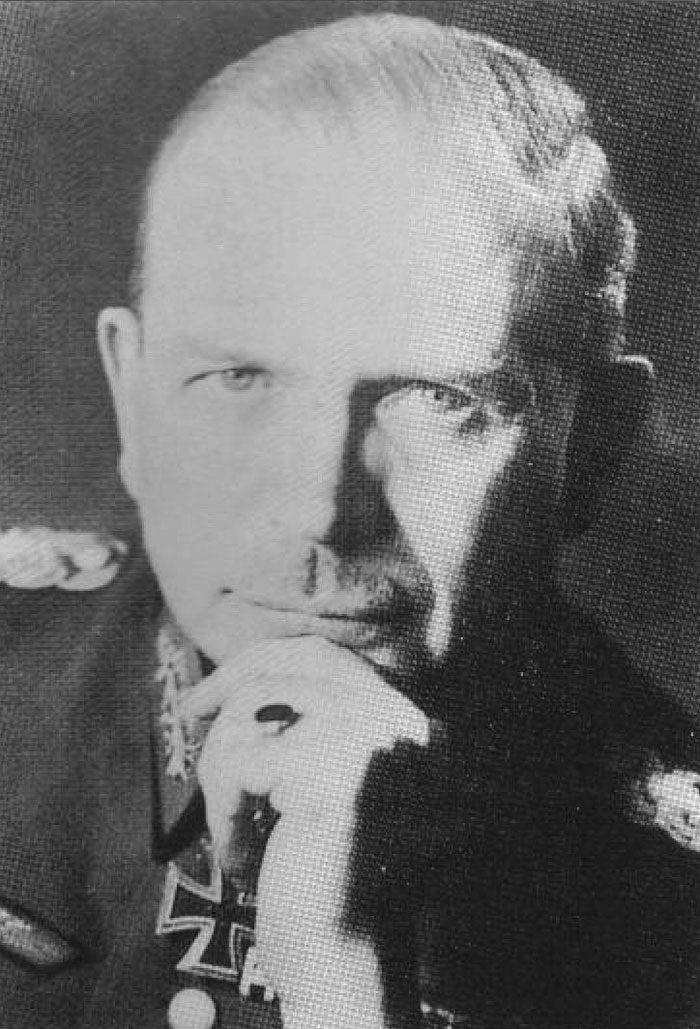 Generaloberst Heinz Guderian, born in 1888 of a West Prussian military family, is generally accepted as being the father of the German armoured forces. He was decorated with the Knight's Cross on 27 October 1939 for his command of XIX Army Corps during the attack or Poland, and to this was added the Oakleaves on 10 July 1941 for his leadership of 2nd Panzergruppe during the invasion of the Soviet Union. As with many of Germany's best soldiers, he fell from favour with Hitler, and was dismissed from his post as Inspector General of Panzertruppe. He died in 1954.

Guderian's book, Achtung Panzer!, was published in 1938 and put forward his views on tank tactics. He advocated the use of the tank independent of the infantry, proceeding at its own best pace and with the sheer power of massed pincer-formation tank attacks, encircling and crushing the enemy. By 1939 Guderian had risen to the rank of general, and in October of that year he was appointed Inspekteur der Panzertruppe.

With a new war on the horizon, the world was about to discover just how much the German military had learned from the painful experiences of the First World War. 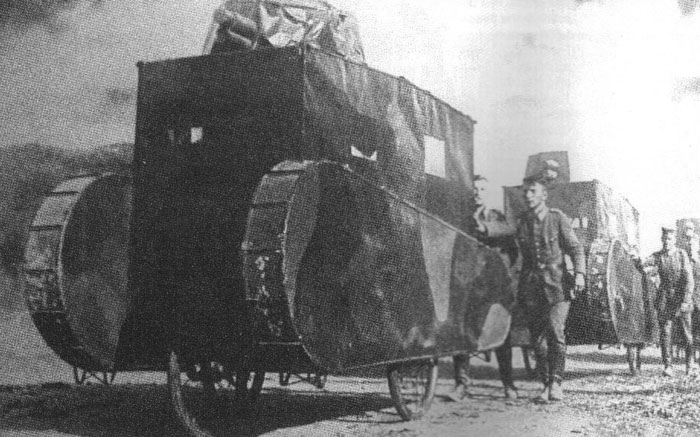 Examples of Germany's famous cardboard tanks on a training exercise in the late 1920s. These simple plywood and card superstructures were built over a standard automobile or, as in this case, a pedal-powered tricycle! They may have looked amusing, but the lessons learned on the training grounds helped Germany become one of the leading proponents of armoured warfare.

Following the end of the First World War, the army of the new German Weimar Republic, the Reichswehr, was limited by the terms of the Treaty of Versailles to a mere 100,000 men, formed into seven infantry and three cavalry divisions. On the accession to power of the National Socialists, a rapid build-up of the armed forces began. Coupled with this, there was an explosion in the number of non-military organisations that provided covert military training. Each year up to 300,000 Germans underwent a period of compulsory state labour in the Reichs Arbeits Dienst (RAD). Although much of the work carried out by the RAD involved construction or agriculture, it was a uniformed organisation, run on military lines and which carried out military style drill training (albeit carrying shovels rather than rifles). 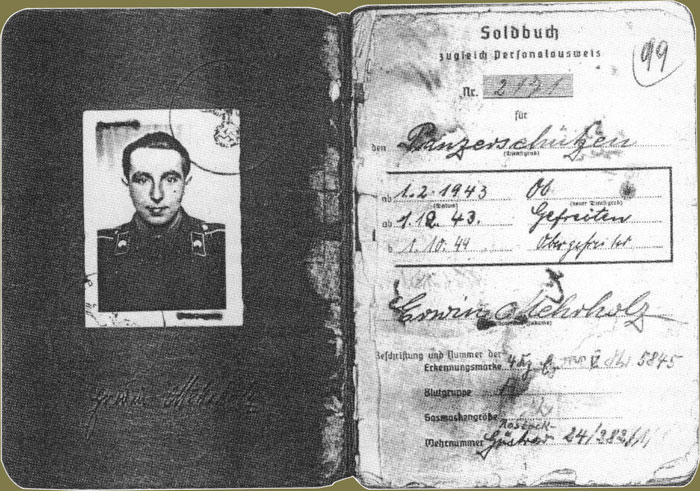 The Soldbuch of a Panzer soldier Note the black Panzer jacket with its death's-head collar patches in the identity photograph. Note also that the initial rank of schütze is prefixed 'Panzer' to become 'Panzerschützen'.

The need for such subterfuge ended in 1935 when universal military conscription was reintroduced. All German males between the ages of 17 and 25 were required to register for military service. Up to the start of the Second World War it was possible to obtain a deferment of military service if the individual was undergoing some technical training, such as an apprenticeship. Ultimately however, the day would come when the prospective soldier was required to report for registration at his local Wehrkreis (Military District) offices. Here, his details would be registered, a medical examination undertaken, and any individual skills appropriate to a particular branch of the service were recorded. He would be allocated to the Ersatz und Ausbildungs Abtleilung (Replacement and Training Detachment) of his assigned unit, then allocated a Wehrpass (military ID book). This book would list the recruit's personal details, any special skills and languages, service in the RAD, and his intended unit. The Wehrpass was a personal ID, and it could also be used to prove that an individual had fulfilled his duty to register for military service.

Once the registration process was complete, the future soldier would return to his everyday civilian life and await the call-up papers that would eventually be sent to him by registered mail, instructing him when and where to report for duty.

Up until the point of registration, as with most armies, there was an element of choice available to the prospective soldier with regard to the particular branch he wished to serve in. However, once registered, the Wehrmacht was as likely as any other army to make totally illogical and perverse decisions in assigning soldiers to units that seemed totally inappropriate. So, needless to say, many young men volunteered before they were drafted, in order to have the chance of joining the military arm of their choice.

Prior to the introduction of conscription in 1935 it was normal for prospective soldiers to volunteer for their own choice of Waffengattung (Branch of Service) in the normal way. However, given that the first Panzer regiments were only formed in 1934, not long before the introduction of compulsory military service, it is safe to assume that the vast majority of Panzer soldiers were registered after the introduction of conscription. German soldiers on active service in the Second World War fell into two basic categories, the Berufsoldat (career soldier), and those considered Auf Kriegsdauer (in for the duration), who would eventually return to civilian life. The Panzertruppe would have been no different to any other branch in containing a mixture of both. 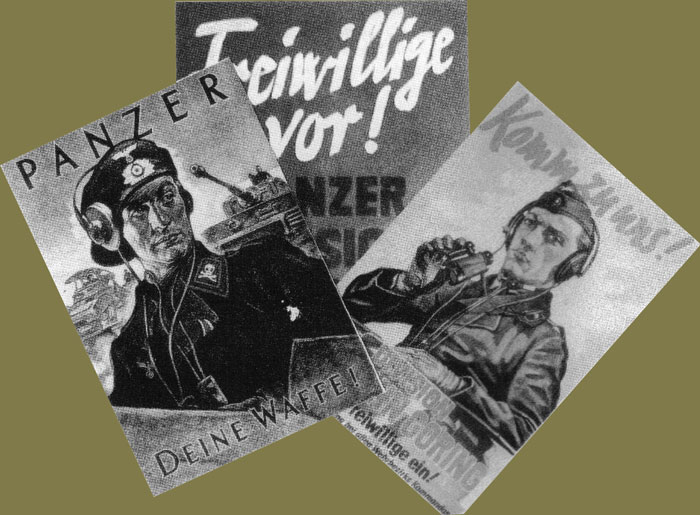 Three typical examples of German recruiting posters for the Panzerwaffe, with exhortations such as 'Panzer - Your Weapon!', 'Volunteers Forward!' and 'Come Join Us!'

In common with many other armies, the Wehrmacht's initial group of armoured soldiers were drawn from cavalry regiments that had been mechanised to become Panzer regiments. As a result, many of those who found themselves serving in tanks would originally have been recruited as cavalrymen.

After the outbreak of war, the Panzer featured regularly and prominently in both newspaper and newsreel reports of Germany's initial stunning successes during the Blitzkrieg period. The National Socialists made extremely effective use of propaganda, and were aware that dramatic photographs could make an instant impact. As a result, they ensured that the German newspapers and magazines of the time had a high photographic content. Magazines such as the famed Signal, which was translated into many languages, including English, were years ahead of their time in the use of colour photography. Even by today's standards, Signal was a well-designed magazine. Cleverly taken photos, usually from a low angle, were used to give the tank an even more impressive sense of mass, power and invincibility. Showing the proud commander in his turret cupola, dressed in smart black Panzer clothing, ensured that the Panzerwaffe maintained a very high profile in the eyes of the German populace. Unsurprisingly, there was no shortage of recruits for this elite branch of the Wehrmacht.