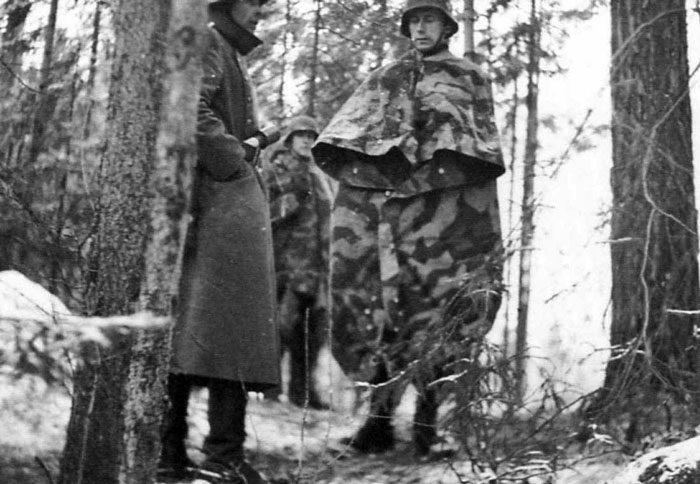 Two Gebirsjäger soldiers can be seen wearing the Zeltbahn. Both soldiers are wearing two Zeltbahn's in order to give them even extra added protection from the rain. The Zeltbahn was designed to be worn around the wearers body in a number of ways and there had been a wartime army manual produced giving various illustrations to the method of wear, depending on whether the soldier was marching, horse riding, riding a bicycle or just in the field wearing it as a rain cape. Note the soldier wearing the standard issue greatcoat with a Stg24 stick grenade inside his black leather infantryman's belt. 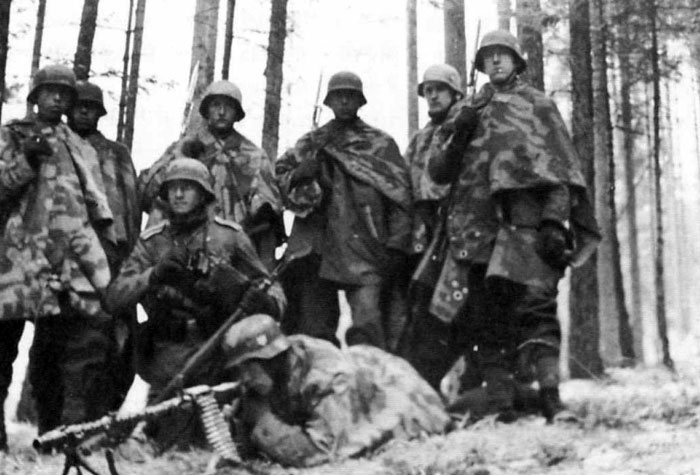 An MG34 machine gun squad, with their commanding officer, poses for the camera in a wooded area. All the squad, except for the officer, who wears the standard army issue Greatcoat, is wearing the Zeltbahn shelter quarter. During the last years of the war, the manufacturers changed the appearance of the Zeltbahn. It was no longer in two tones, but consisted of just the lighter of the two.

With such drastic restrictions of every kind, tens of thousands of under-nour-ished civilians, mostly women, alongside remaining slave labourers, were marched out to expend all their available energy to dig lines of anti-tank ditches. Most of the ditches were dug between the Vistula and Oder Rivers, as a secondary line of defence. However, German forces were now barely holding the wavering Vistula positions that ran some 175 miles from the Baltic coast to the juncture of the Oder and Neisse in Silesia. Most of the front was now held on the western bank of the Oder. In the north, the ancient city of Stettin, capital of Pomerania, and in the south, the town of Kustrin, were both vital holding points against the main Russian objective of the war - Berlin.

As the great Red Army drive gathered momentum, more towns and villages fell to the onrushing forces. Suicidal opposition from a few SS, Wehrmacht and Gebirsjäger strong points, bypassed in earlier attacks, reduced buildings to blasted rubble. Everywhere, it seemed, the Germans were being constantly forced to retreat. Many isolated units spent hours or even days fighting a bloody defence. Russian soldiers frequently requested them to surrender and assured them that no harm would come to them if they did so. But despite this reassuring tone, most German troops continued to fight to the bitter end. To the average mountain trooper in 1945 they were fighting an enemy that they not only despised, but also were terrified of. Many soldiers, especially those fighting in the ranks of the Waffen-SS, decided that their fate would be met out on the battlefield. To them, they would rather bleed, fighting on the grasslands of Eastern Europe, than surrender and be at the mercy of a Russian soldier.

By early April, the atmosphere among the troops of Heeresgruppe Vistula became a mixture of terrible foreboding and despair as the Russians prepared to push forward on the River Oder. Here, along the Oder and Neisse fronts, the troops waited for the front to become engulfed by the greatest concentration of firepower ever amassed by the Russians. General Zhukov's, 1st Belorussian Front and General Konev's, 1st Ukrainian Front were preparing to attack German forces defending positions east of Berlin. For the attack, the Red Army mustered some 2.5 million men, divided into four armies. They were supported by 41,600 guns and heavy mortars as well as 6,250 tanks and self-propelled guns.

The final battle, before Berlin began at dawn on 16 April 1945. When the Soviet forces finally attacked, during the early morning of 16 April, the Germans were ready to meet them on the Seelow Heights. From the top of the ridge, hundreds of German flak guns that had been hastily transferred from the Western Front, poured a hurricane of fire into the enemy troops. All morning, shells and gunfire rained down on the Red Army, blunting their assault. By dusk the Russians, savagely mauled by the attack, fell back. It seemed the Red Army had under-estimated the strength and determination of their enemy. 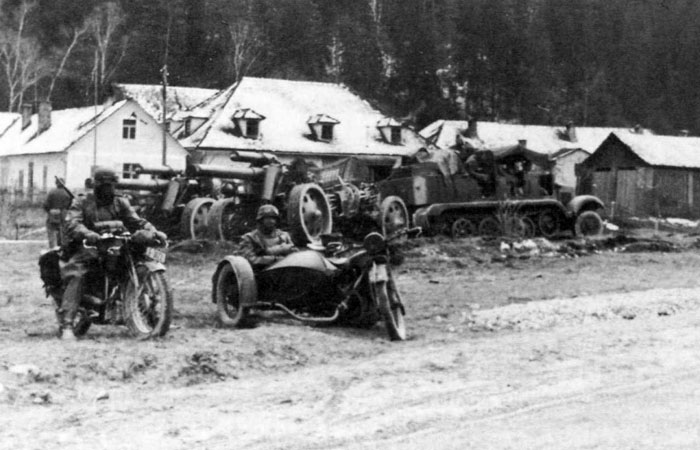 Gebirgs motorcyclists have halted at a side of a road. Behind them are two stationary 15cm sFH18 heavy field howitzers being towed by prime movers. The 15cm field howitzer was primarily designed to attack targets deep into the enemy rear. This included command posts, reserve units, assembly areas, and logistic facilities. A heavy mountain gun battery often comprised of 3 batteries, fielding the 15cm howitzer. However, these guns were heavy and cumbersome for the Gebirsjäger, especially in mountainous areas. 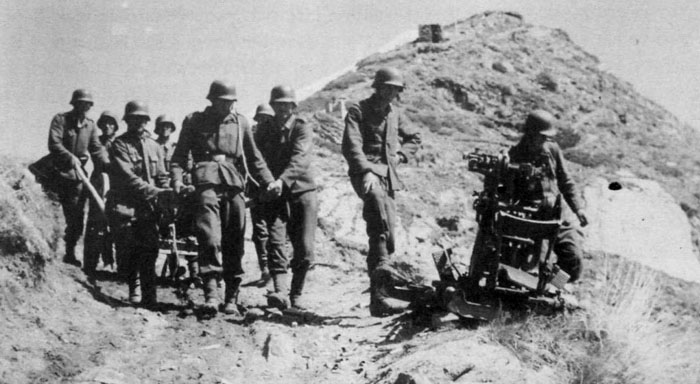 By the next day, the Russians had still not breached the German defences. But General Zhukov, with total disregard of casualties, was determined to batter the enemy into submission and ruthlessly bulldoze his way through. Slowly and systematically, the Red Army began smashing through their opponents. Within hours, hard-pressed and exhausted German troops were feeling the full brunt of the assault. Confusion soon swept the decimated lines. Soldiers who had fought doggedly from one fixed position to another were now seized with panic.

In three days of constant fighting, thousands of German soldiers had perished. Despite their attempts to blunt the Red Army, the road to Berlin was finally wrenched wide open. At this crucial moment, a number of top quality SS soldiers, along with a motley assortment of Gebirsjäger troops, had been gathered in the recently established 11.Panzer-Armee under the command of SS-Obergruppenführer Felix Steiner. All of these troops were to take part in the last, apocalyptic struggle to save the Reich capital from the clutches of the Red Army.

By 25 April, Berlin was completely surrounded, and the next day some half a million Soviet troops bulldozed their way through the city. German reinforce¬ments consisted of fewer than 5,000 Luftwaffe personnel, Hitlerjugend, Wehrmacht, Waffen-SS and Gebirsjäger troops, with many of them armed with hand-held weapons. The city was doomed.

For the next week the battle for Berlin raged. What was left of the mountain troops in the city were seen fighting bitterly with members of the Waffen-SS, Hitlerjugend, Volkssturm, Luftwaffe and Wehrmacht troops. Here, the soldiers were ordered to fight to the death and anyone found deserting or shirking from their duties were hunted down by Reichsführer Heinrich Himmler's personal Escort battalion and hanged from the nearest lamppost. But even in the last days of the war, the Gebirsjäger proved to be an efficient and formidable fighting machine. Even as the last hours were fought out in the fiery cauldron of Berlin, mountain troop units, lacking all provisions including many types of weapons, effectively halted and stemmed a number of Russian assaults. 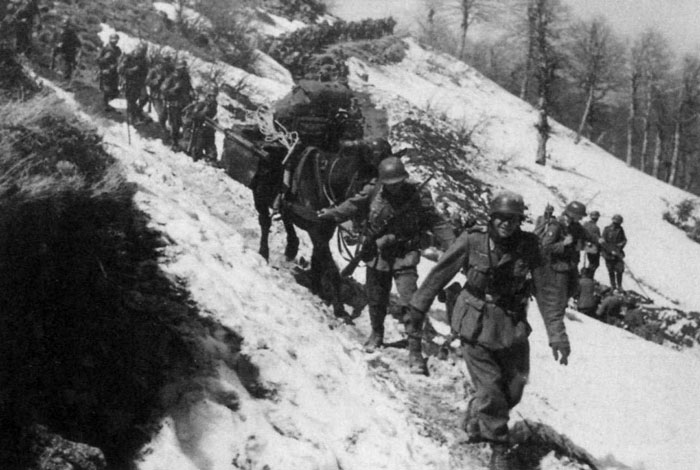 Two photographs showing heavily burdened mules with their handlers along a narrow mountain road. Signals equipment has been loaded onto the animals. In the first photograph, a field telephone reel can be identified attached to the side of the mule's pannier. Mountain troops had to carry more personal supplies than that of a regular infantryman, as they could not always be regularly supplied whilst in mountainous regions. 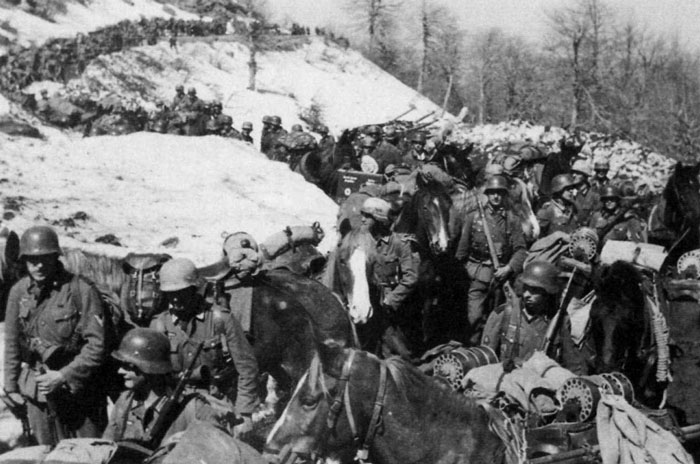 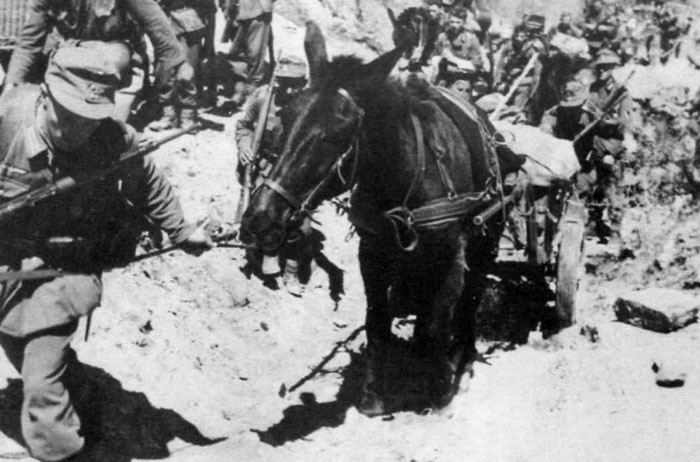 A Gebirgs soldier leads a mule up a steep mountain slope. The animal is towing an If. 18 infantry cart, which is probably being used to carry vital supplies. The carts were designed to be used over very rough or steep terrain, and one cart was allotted to each rifle platoon. 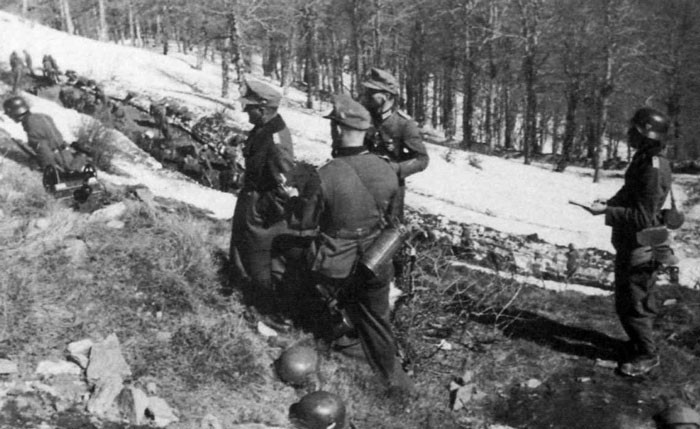 Gebirgs officers stand on a mountain slope and watch a signalman pulling a telephone reel. This type of reel could be drawn by hand, as in this photograph, or behind a bicycle. Often the cables were connected on poles to a radio truck (Funkkraftwagen). However, for speed on the battlefield, signalmen frequently laid them on the ground, but the cables were susceptible to breakages from passing traffic running over them. This signalman would be part of a signals battalion. A signals battalion provided both field and radio communications support within the division, linking all subordinate units. 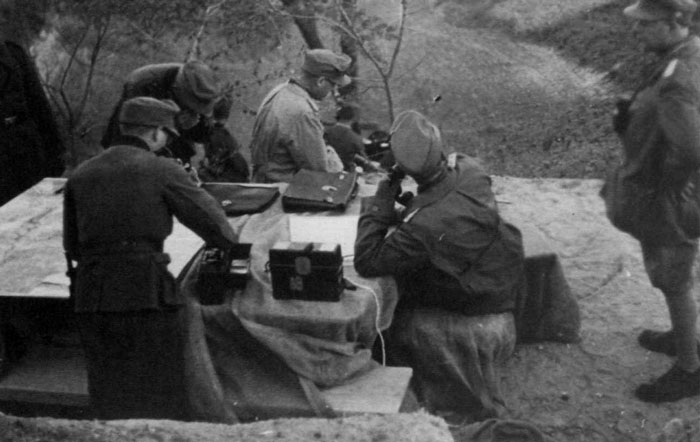 Two photographs showing a unit command post dug-in on a mountain slope. Map cases and various paperwork can be seen on the table, allowing the officers to make any minor adjustments quickly. Note the two field telephones on the table, allowing a vital communication link between other command centres and front lines. 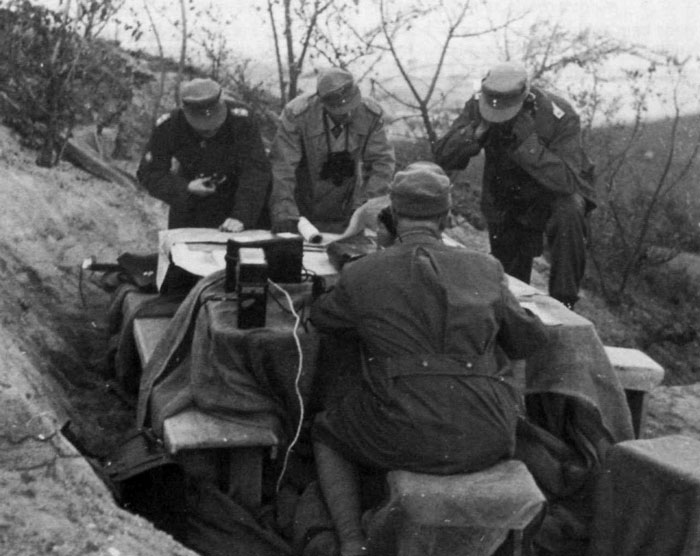 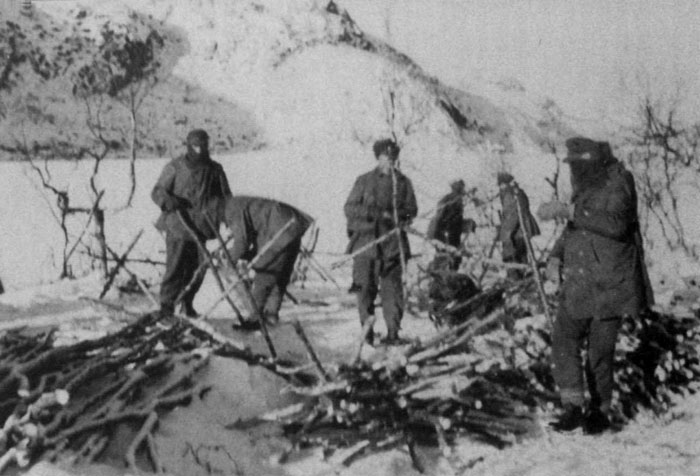 At the base of a hillside, Gebirgstruppen can be seen erecting what appear to be anti¬personnel obstacles from foraged wood. The soldiers all wear the sage green windbreaker jackets specially issued to the Gebirsjäger. 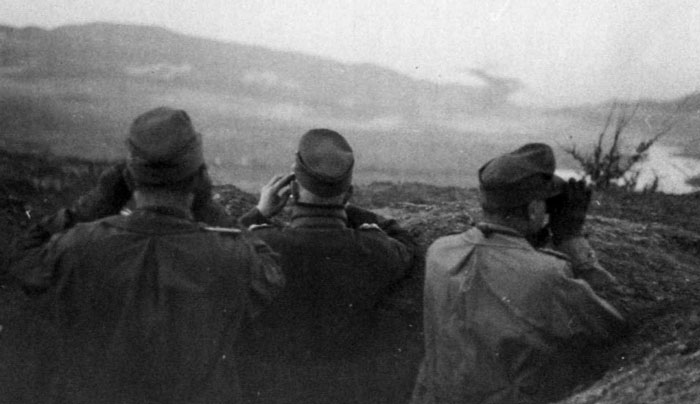 A unit command post situated on a mountain slope. All three officers survey the terrain ahead using their 6x30 field binoculars. From this location, the commanders had an exceedingly good vantage point and were able to pin-point their enemy or the position of their forces with great accuracy. 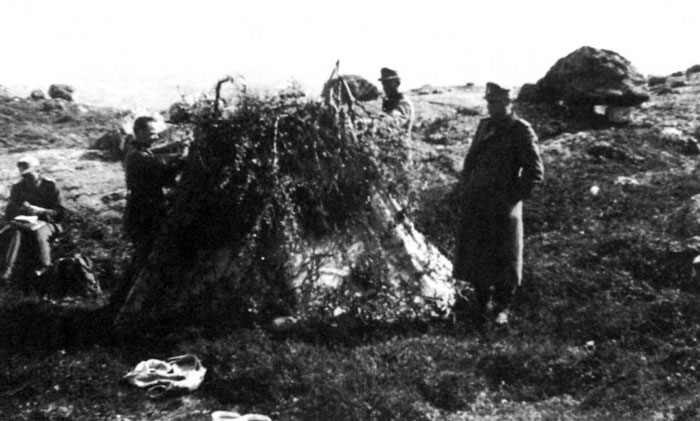 Two photographs showing a Gebirsjäger unit establishing a number of shelter quarter tents and a bivouac on the reverse slope of a ridge. In the first photograph, a commander wearing the officers greatcoat stands and watches as two of his men apply the finishing touches to the tent by camouflaging it with branches. 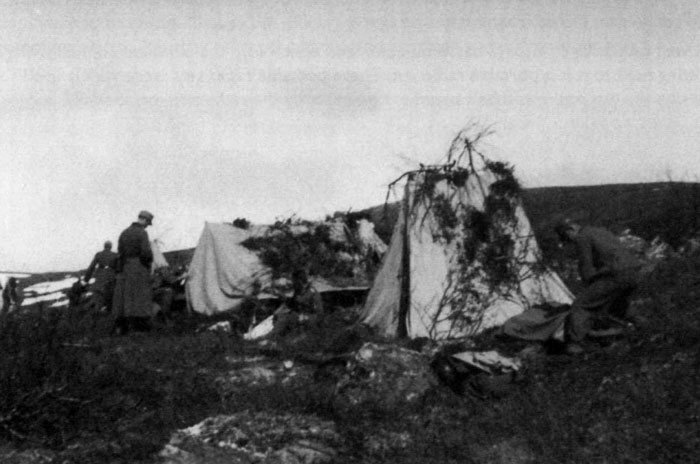 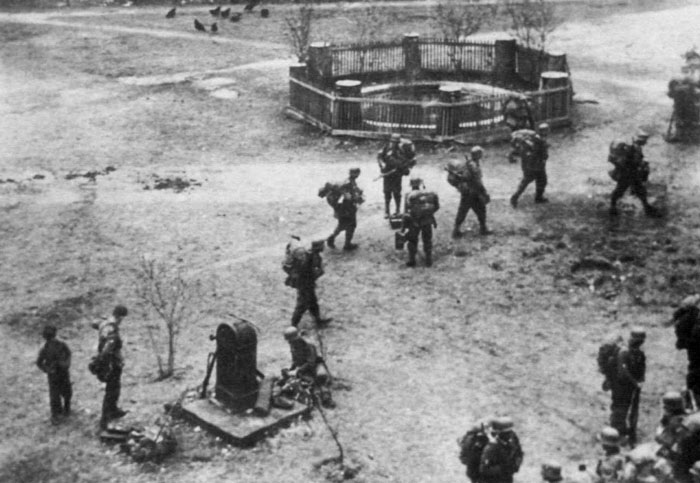 Heavily equipped Gebirgstruppen pass through a village. One soldier can be seen filling his extra large water bottle from a communal cistern. There appears little time for rest and the troops move off to join their unit. 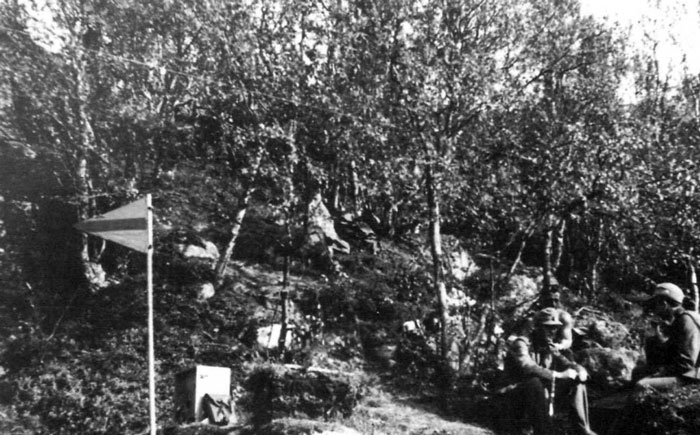 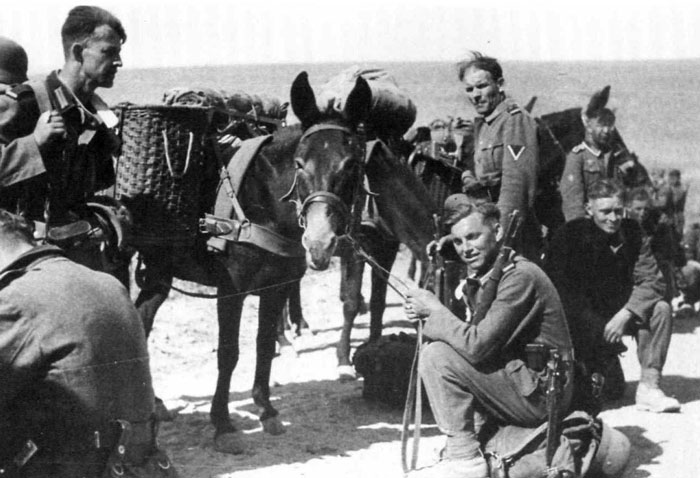 NCO Gebirgs handlers pause in their march with their pack animals. Note the handler utilizing his Bergen-type rucksack as a makeshift seat. He is armed with the Kar98k bolt action rife and, attached to his black leather infantryman's belt, is his S84/98 bayonet or sidearm, as it was commonly referred to. 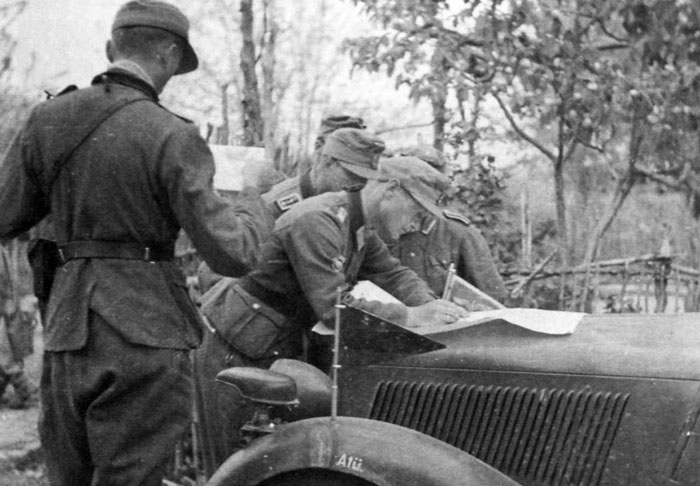 Commanders scrutinize a map which has been sprawled across the bonnet of a stationary staff vehicle. One of the officers is making amendments to the map whilst his comrades watch. Another officer appears to be checking some alterations to a previous map. 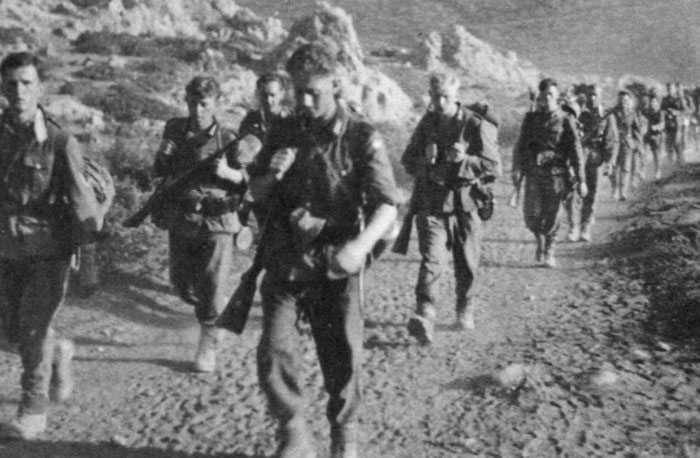 On the march is a column of Gebirgs infantry. In the heat of the day they have discarded their headgear and have attached it to their rucksack. They are all armed with the mauser bolt action rifle, which can be seen worn over their right shoulder. 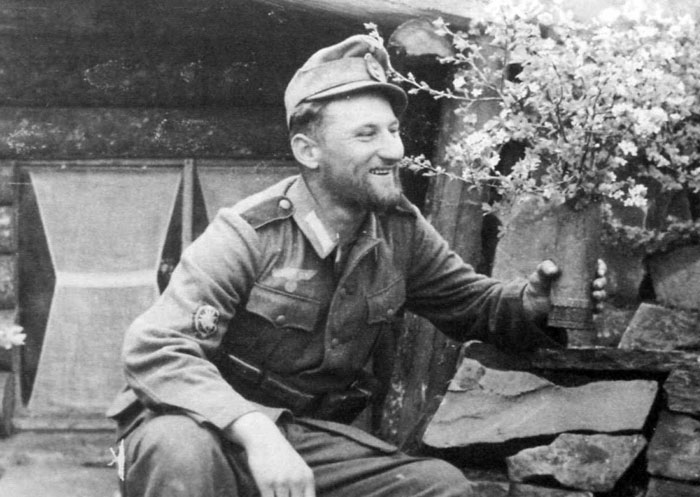 Outside a quarter and a smiling Gebirgstruppen shows his comrades some flowers that he has carefully put inside a 7.5cm artillery shell, probably trying to make his shelter more homely. He wears the typical uniform associated to that of a Gebirsjäger. 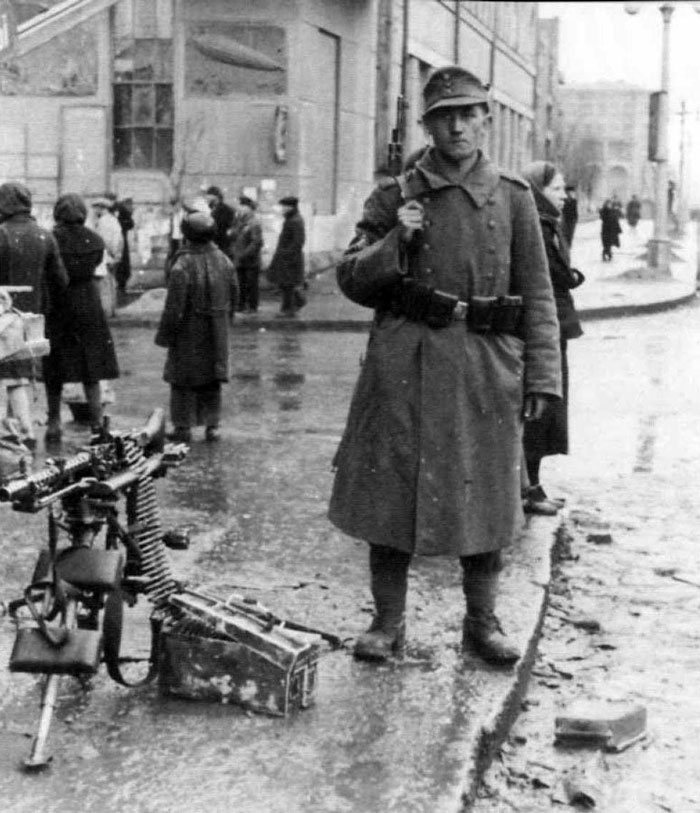 A Gebirgs soldier, guarding a heavy MG34 machine gun position on the corner of a busy town in Poland. The locals seem impervious to this piece of weaponry, which is mounted on a sustain fire mount. Each infantry battalion contained an MG Kompanie, which fielded eight MG34 heavy machine guns on the sustained fire-mount. 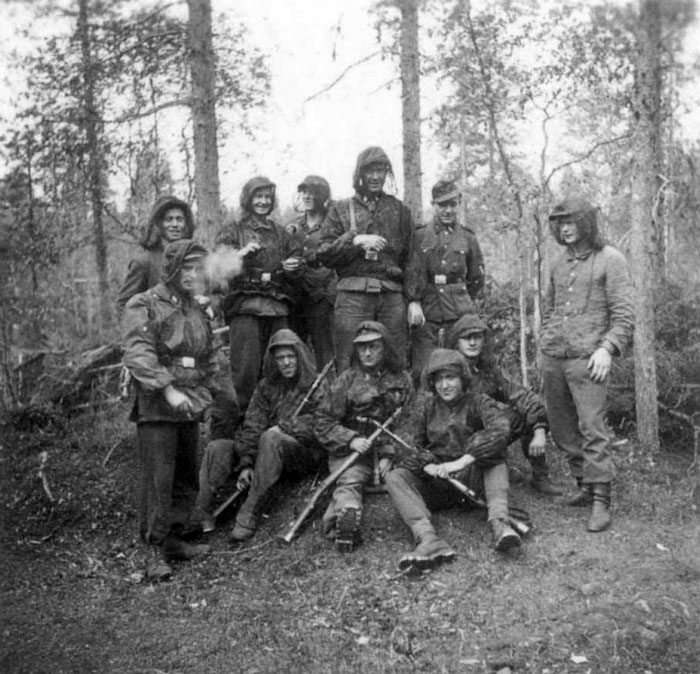 Inside a forest clearing and soldiers from the 6.SS-Gebirgs-Division pose for a group photograph with their mosquito nets temporarily pulled back over their headdress. With the vast amounts of lakes and stagnated pools of water in the forested regions where the division was fighting, mosquito nets plagued the daily routine of the German soldier. 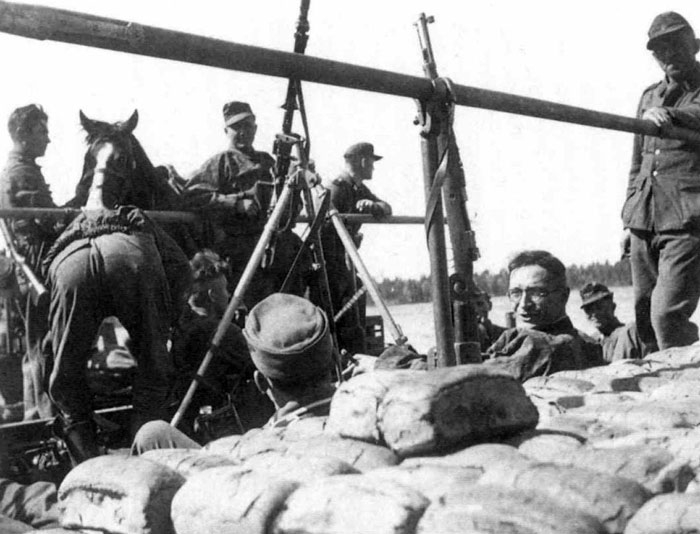 SS truppen, belonging to the 6.SS-Gebirgs-Division, ferrying supplies across a river. Onboard are loaves of bread, which was a vital ingredient to the dwindling stocks of food supplied to the German forces on the Ostfront. An MG34, mounted on an anti¬aircraft tripod, is being used against possible aerial attack, which was now a constant problem for the soldiers. 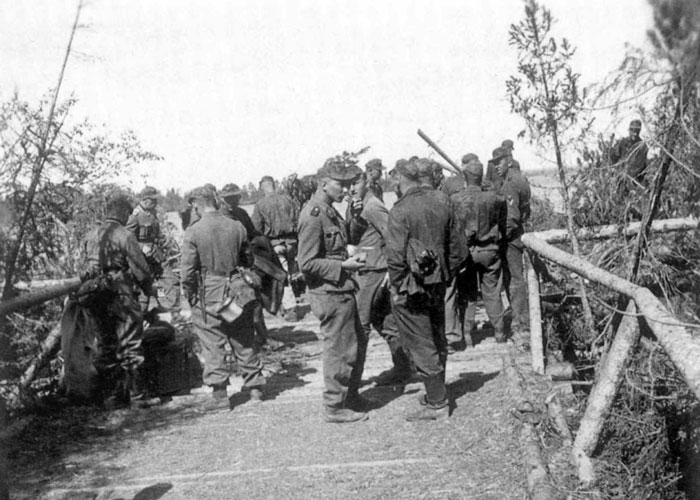 SS troops, from the 6.SS-Gebirgs-Division, pause during operations in the Karelia, where it fought until the Finnish armistice in September 1944. The division then marched on foot, nearly 1000-miles, through Finland and Norway. It arrived in Denmark in December and was transferred to the Palatinate in western Germany. It fought in the 'Nordwind' offensive in January 1945, where it suffered heavy losses.