The Phantom broke all the rules. Fighters were supposed to be small, sleek single-seaters with guns. The Phantom was huge and had bent wings, a two-man crew and missile armament. It looked wrong, but it flew right. Strapped inside Phantom cockpits over Vietnam, naval aviators fought MiGs in raging air combat. Although there were some early problems, the Phantom came out on top almost every time. 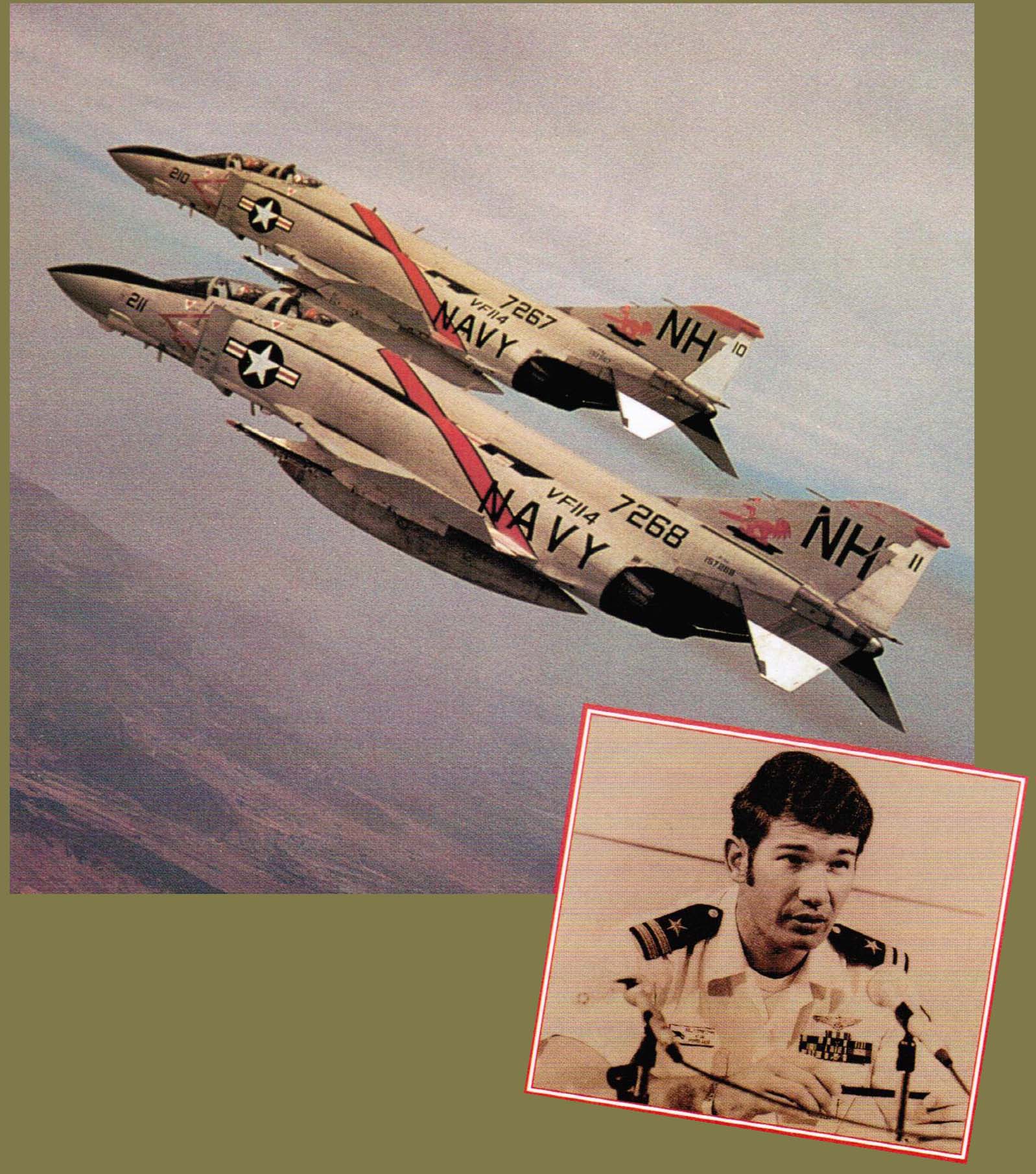 Lt. Randy Cunningham and his RIO Lt. Willie Driscoll scored their third, fourth and fifth kills on May 10, 1972, to become the Navy's only aces of the war in Southeast Asia.

Few human exploits compare with fighting in the F-4 Phantom. The big, powerful machine gave both pilot and radar officer the ride of their lives, blasting aloft with twice as much power as other fighters and going into battle armed to the teeth. Designed as a U.S. Navy carrier-based fighter, the Phantom became a jack-of-all-trades, doing many jobs so well that no other warplane met its standard.

With its far-reaching radar, the Phantom was meant to spot the enemy from a great distance and take him clown with a radar-guided missile. It did not always work that way. A small, nimble fighter like the MiG-17 could pose a real danger to the Phantom if it got close enough.

The Phantom was both a fighter and a bomber, capable of unleashing up to 16,000 pounds of bombs. Further, if challenged in the air, the Phantom could fight back. Not surprisingly, the U.S. Navy's air aces in Vietnam flew the Phantom. 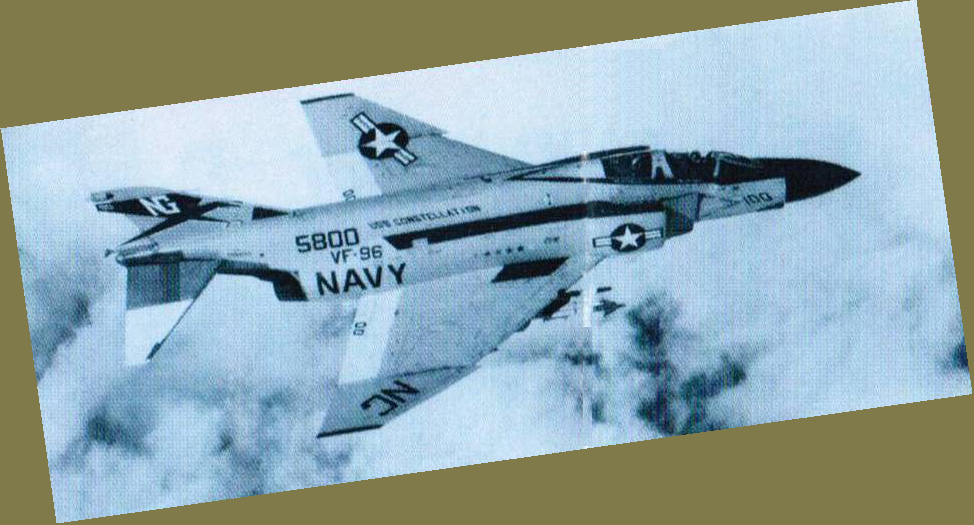 "Showtime 100" was the Phantom used by Randy Cunningham and Willie Driscoll on May 10, 1972, to score their three kills. The last was an epic battle against Colonel Tomb, reputedly the leading North Vietnamese ace. On the way home, "Showtime 100" took a SAM hit forcing the crew to bail out over the sea, but they were rescued safely.

By 1972, when Cunningham and Driscoll flew this aircraft to their three MiG victories, the F-4J was the standard shipboard fighter for the U.S. Navy. Because of its size, it could only fly from the larger carriers and could not fit on the small "Essex"-class ships. 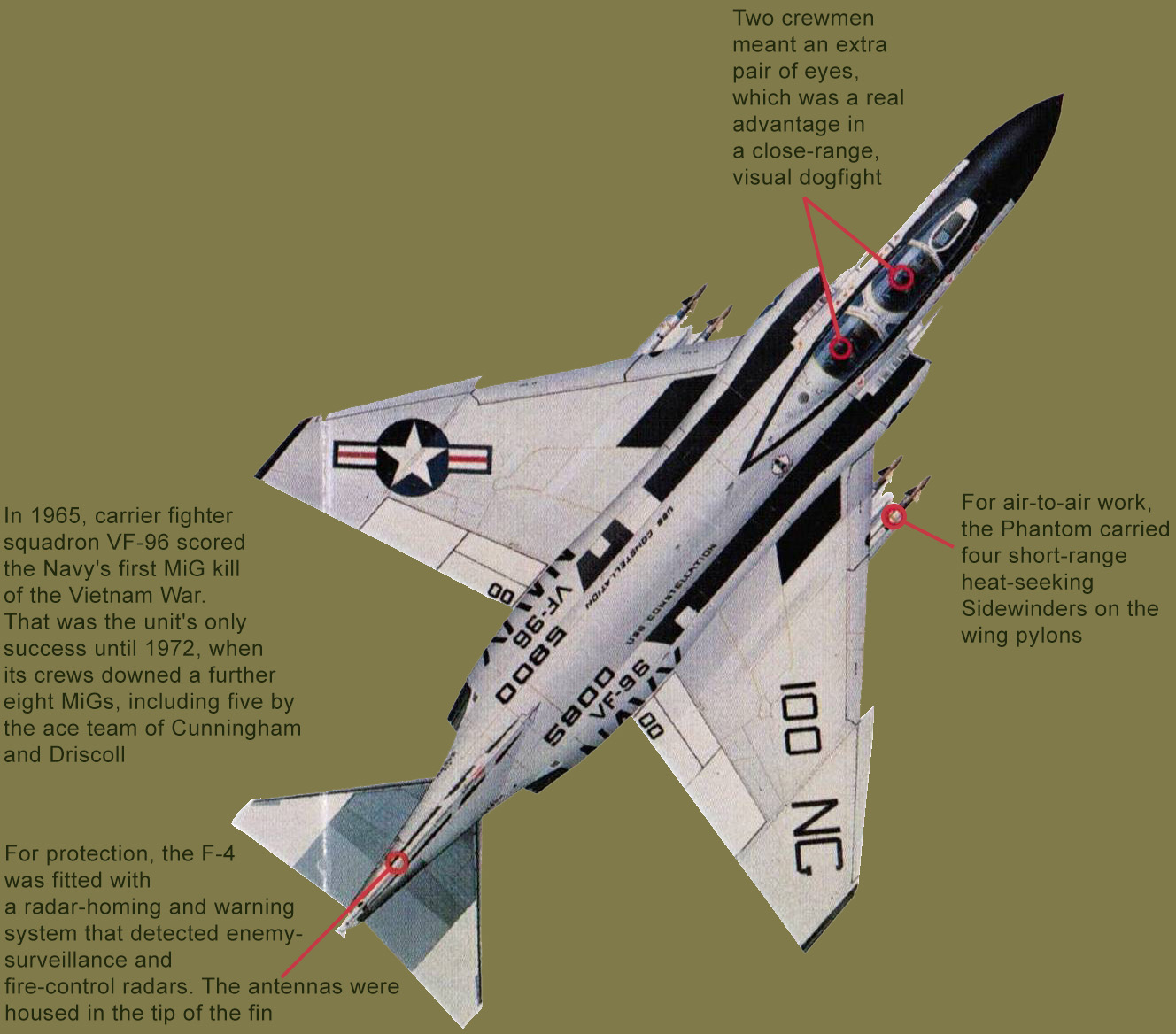 THE NAVY TAKES ON THE MiGs:

May 10, 1972, was the Navy Phantom's big day over Vietnam. Flying from the USS Constellation, sister squadrons VF-92 "Silver Kings" and VF-96 "Fighting Falcons" blasted seven MiGs from the skies between them while a VF-51 crew shot down another for the Navy. To make matters worse for the North Vietnamese, Air Force Phantoms accounted for another three MiGs that day. 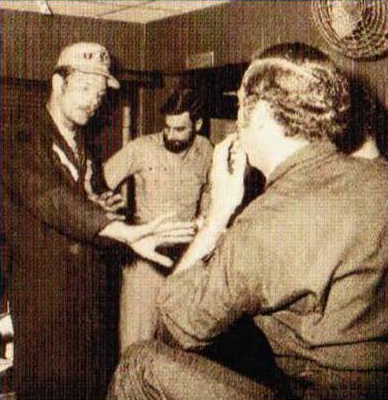 FIRST KILL OF THE DAY:

Lt. Curt Dose (seen here demonstrating his dogfight) and Lt. James McDevitt from VF-92 scored the first kill of May 10, after blasting their F-4s down the Kep runway to stir up the MiGs. 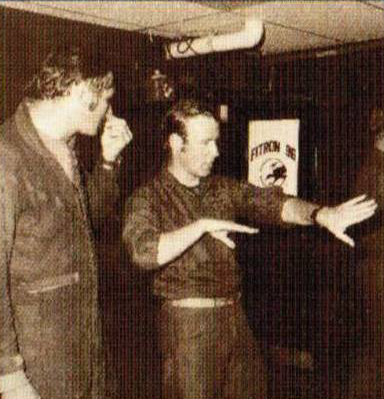 Thomas Blonski looks on as his pilot. Lt Matt Connelly, relives one of their duels with MiGs on May 10. Two MiGs fell to their AIM-9 Sidewinders that fateful day. 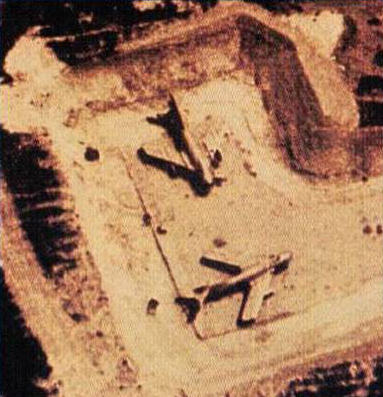 North Vietnamese MiG-17s cower behind bunkers between missions. Although the faster MiG-21 was available, many experienced pilots, such as Colonel Tomb, favored the nimble "Fresco". 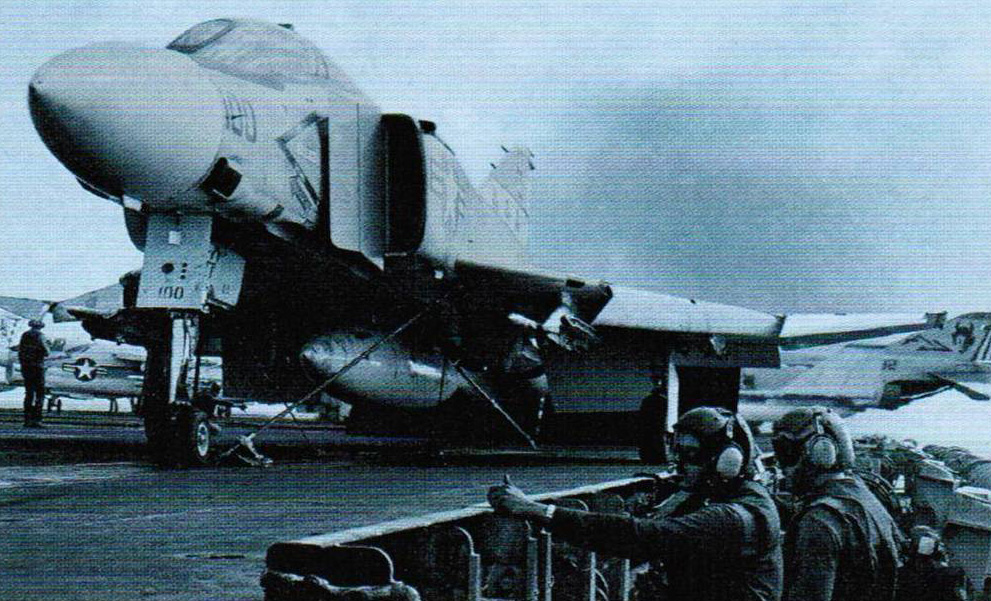 It wasn't just the Navy that flew the Phantom from aircraft carriers. U.S. Marine Corps squadrons shared the load of shipboard deployments. 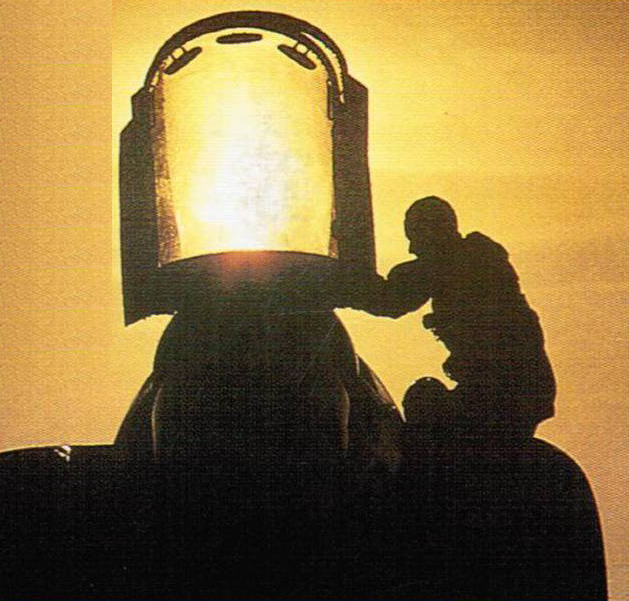 In the late 1960s the F-4 Phantom crew was considered the elite of the West's air forces. No service trained their crews better than the U.S. Navy. 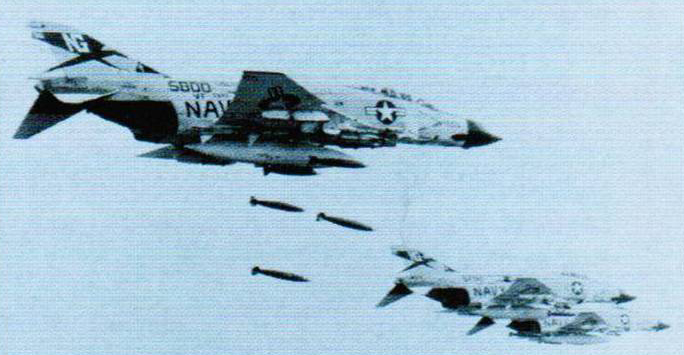 The Phantom was best known as a MiG-killer, but it did its fair share of ground attacking as well. These aircraft are seen over Vietnam, dropping 500-lb. bombs from the relative safety of medium altitude. 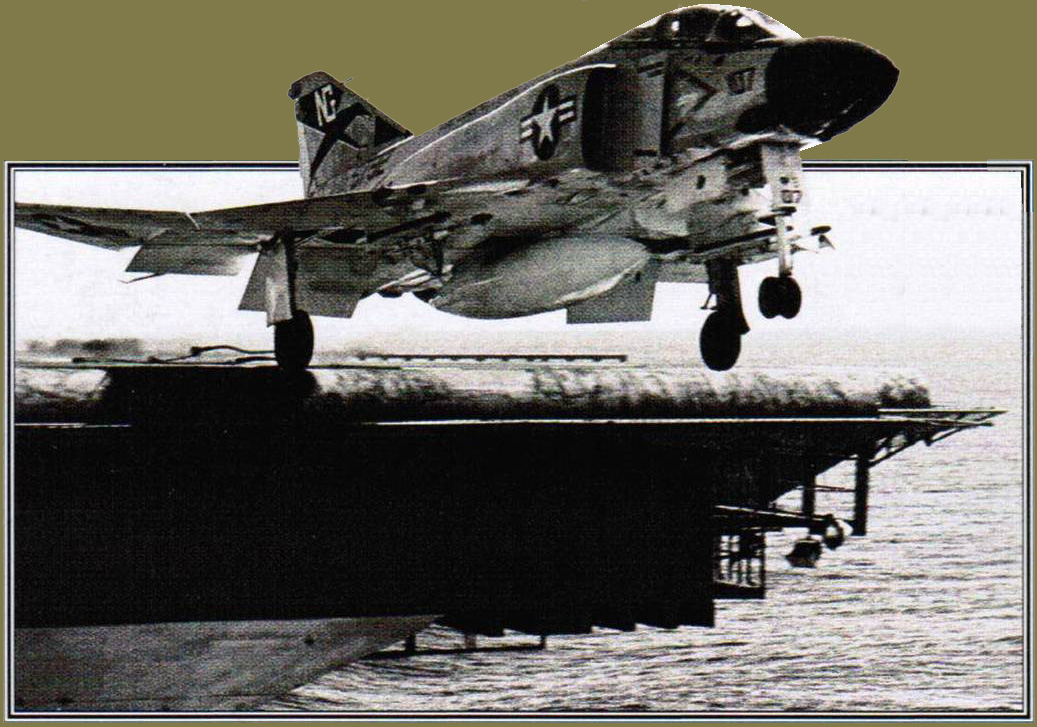 An F-4J thunders from the deck on an unarmed training sortie. The undercarriage was incredibly strong to absorb the pounding of carrier operations.

▶ Tests showed that pilots in Vietnam were more anxious about landing on the carrier than about fighting MiGs.

▶ In early Vietnam combat, Phantom pilots were achieving only a 1:1 kill ratio.

▶ After the introduction of "Top Gun" training, the kill ratio improved to as much as seven MiGs for each F-4 lost.

They flew the most dangerous air missions of the Gulf War. Hurtling through the night, less than 200 feet above the ground, their targets were the heavily defended runways of Iraq's military airfields. And the perilous nature of their role is reflected in the fact that the Royal Air Force's (RAF) Tornado GR.1s suffered proportionally the highest losses of all the aircraft taking part in Operation Desert Storm. 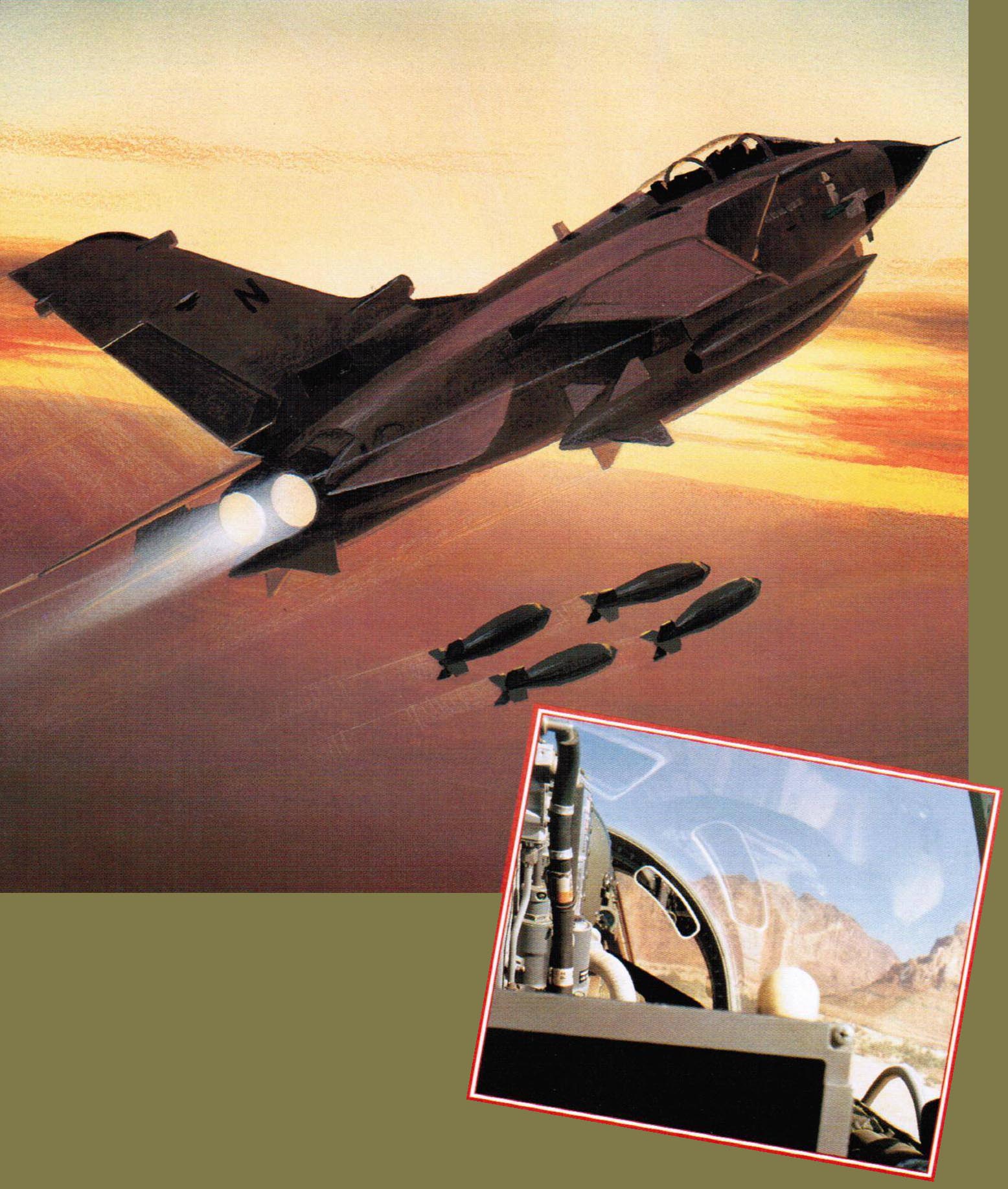 Tornados are designed to fly very fast, very low. Just how low is evident in this view from the cockpit of a Tornado as it races a hundred feet up through a desert "wadi."

"It was a very, very black night; probably one of the darkest I have ever flown on. Over the desert, especially over Iraq, there are no lights. You are flying very low, and all you see is the odd Bedouin camp flashing by."

From the beginning of the Gulf War, British and Saudi air force Tornados made their trademark high-speed attacks. Passing low over their target, the huge JP233 containers beneath the fuselage dispensed runway-cratering munitions and area- denial mines, designed to prevent repair operations.

Low-level missions such as those employing the JP233 were among the most dangerous of the war. Five aircraft were lost to the full force of enemy antiaircraft artillery.

The problem was the size and multiple runways of the Iraqi air bases. It didn't take the Tornado pilots long to decide that destroying the taxiways leading to the runways was the most effective way of making the airfield unusable.

The lack of air opposition later in the war testified that the incredible courage of the crews was not wasted, and the Tornado force had done its job.

JP233 is no lightweight. Twenty feet long and weighing 5,150 pounds, it needs a powerful machine like the Tornado to carry its twin dispensers.

British air force Tornados in the Gulf were notable for their colorful nose art. "MiG-Eater," depicted here, was based at Tabuk. It was one of the most heavily used Tornados, being flown on 40 missions. 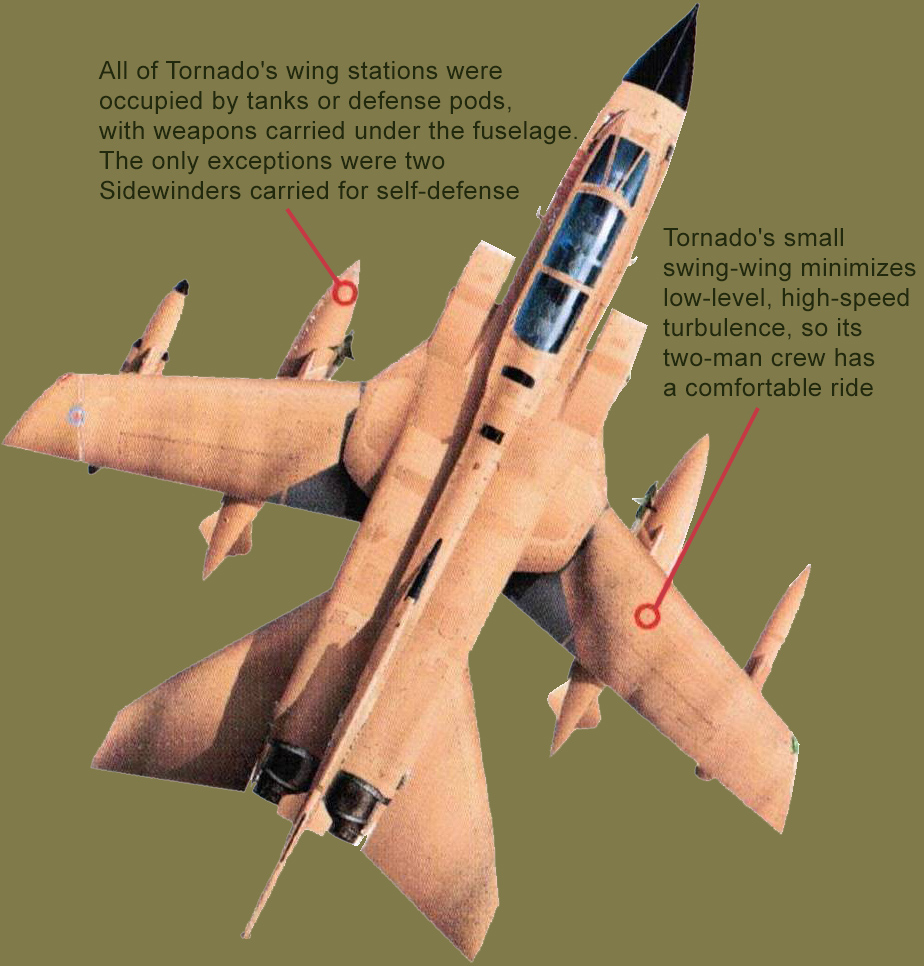 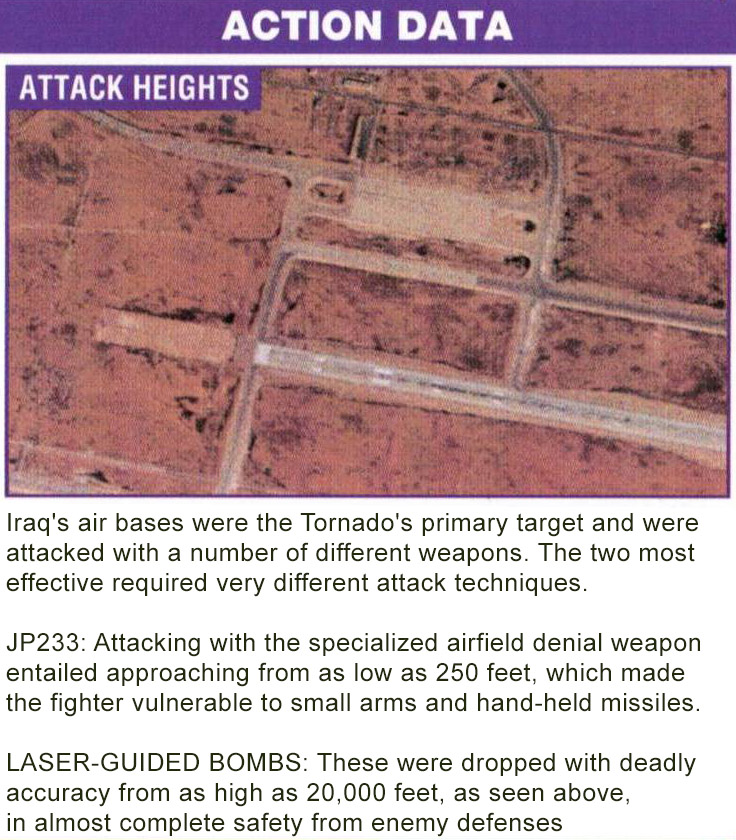 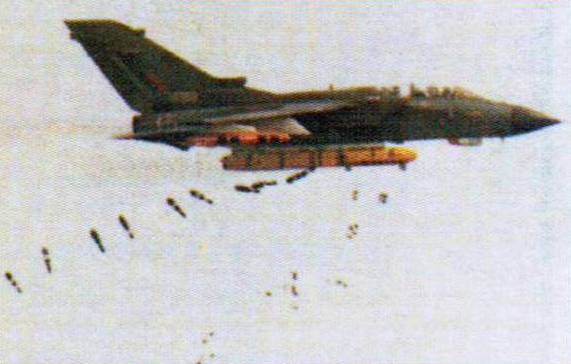 JP233 dispenses two types of bomblets. The larger SG357 munition at the rear penetrates a runway before exploding, causing craters. The tiny HB876 mines dispensed from the front are lethal against repair personnel and vehicles.

Control of this low-flying, exceedingly fast plane is largely automatic. The aircraft's terrain-following radar ensures that a constant ground clearance is maintained. 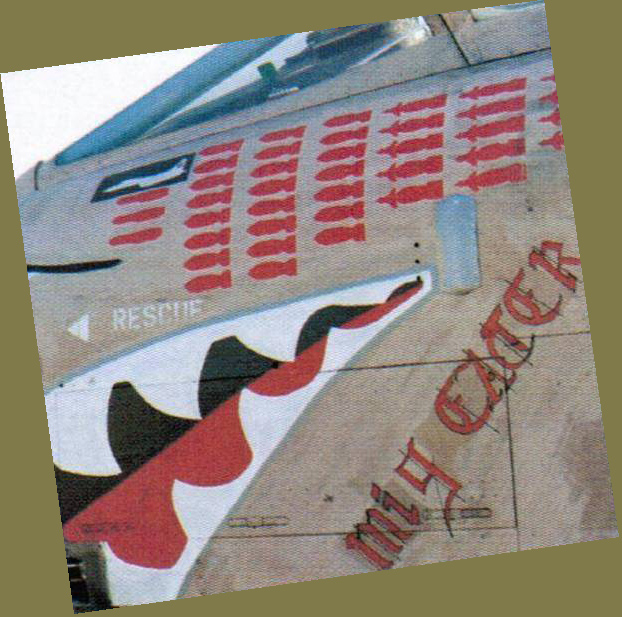 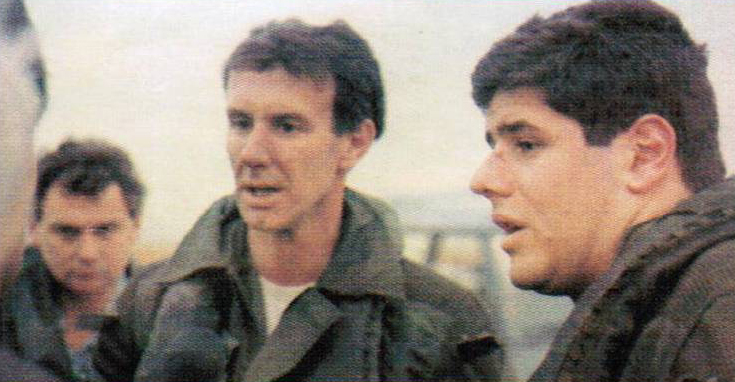 Strain shows on the faces of a returning Tornado crew after the first night's mission, along with relief at having survived unscathed. 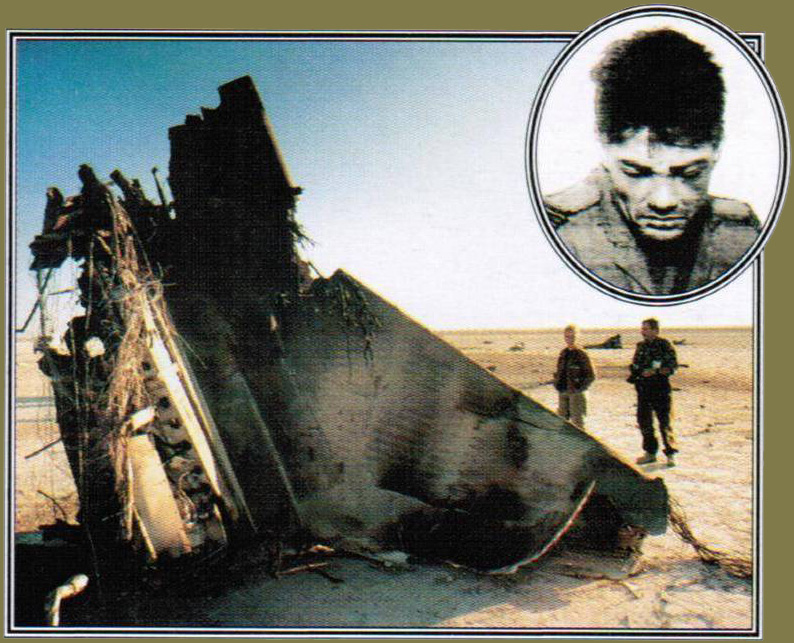 Some crewmen, like Jon Peters (inset), managed to survive being shot down, getting out of their shattered Tornados only to suffer mistreatment at the hands of their captors.

▶ Four Tornados were lost in the first five days, although only one carried JP233.

▶ British Tornados flew a total of 1,600 bombing missions during the war, or 1.4 percent of the coalition total.