One of the early successes of Anglo-French collaboration, the Jaguar fighter-bomber has also been the mainstay of the RAF's first-line squadrons over the last three decades. With improved weapons and avionics, it has developed into a useful tactical ground-attack and reconnaissance aircraft, despite its performance being somewhat modest compared with some of its contemporaries. 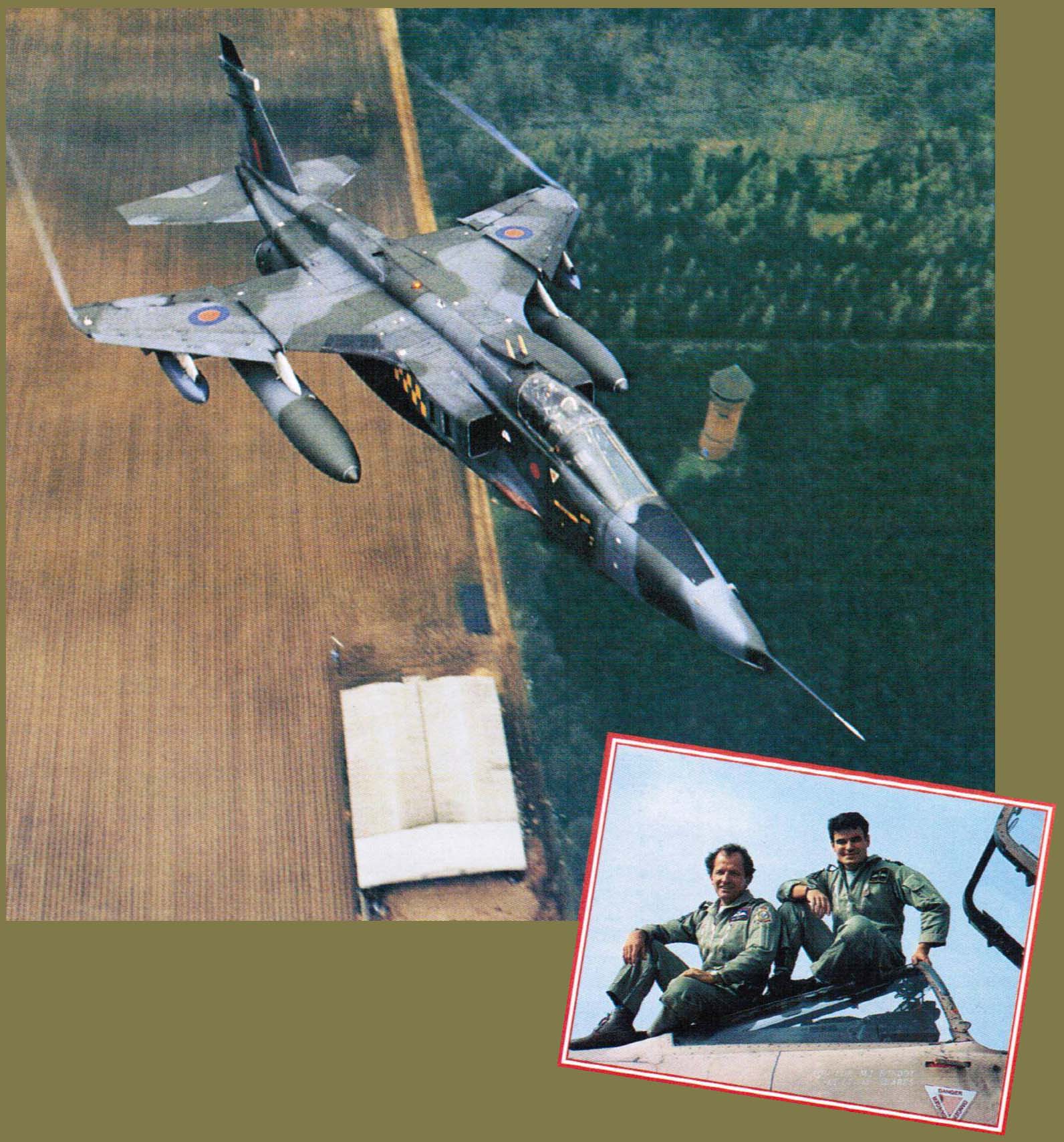 It was thought that the Jaguar was in the twilight of its career when both French and RAF Jaguars were sent to the Gulf to participate in Operation Desert Storm. Since then a new RAF version, the GR.Mk 1B, has entered service equipped with the TIALD imaging and laser pod.

Throwing a fast fighter- bomber through mountains, at night, without radar, alone and unaided by a navigator may seem a recipe for disaster - but that is what RAF Jaguar pilots do on a regular basis without batting an eye. They know that the Jaguar, with 20-plus years of service behind it, is a tried and tested weapon that won't let them down.

When it came to a real war situation in the Gulf in 1991, the Jaguar showed that it still has teeth and is able to fly missions as well as aircraft that are considerably younger.

A Franco/British project, the result of collaboration between the British Aircraft Corporation (now British Aerospace) and Dassault-Breguet, (the SEPECAT Jaguar was first Mown on September 8, 1968, as a single-seat attack aircraft with limited all-weather capability. It was intended to serve both the Armée de l'Air and the RAF; the French Jaguar A entered service first, in May 1972.

The RAF took delivery of its first GR.Mk 1 in May 1973. A well-equipped tactical strike- lighter, its equipment included an inertial navigation system, a head-up display and laser ranger. From 1983, navigation upgrades resulted in the GR.Mk 1A. Some were able to perform a secondary reconnaissance role. The GR.Mk IB and two-seat T.Mk 2B was introduced in 1995 with the TIALD pod, which allows a Jaguar to deliver its own laser-guided weapons.

Jaguars are fitted with a retractable inflight-refueling probe, which greatly increases their range capability.

XZ364 "Sadman" was one of a detachment of Jaguars from the RAF Coltishall Jaguar Wing based at Muharraq, Bahrain, and one of two RAF "Jags" that flew 47 missions in the Gulf. 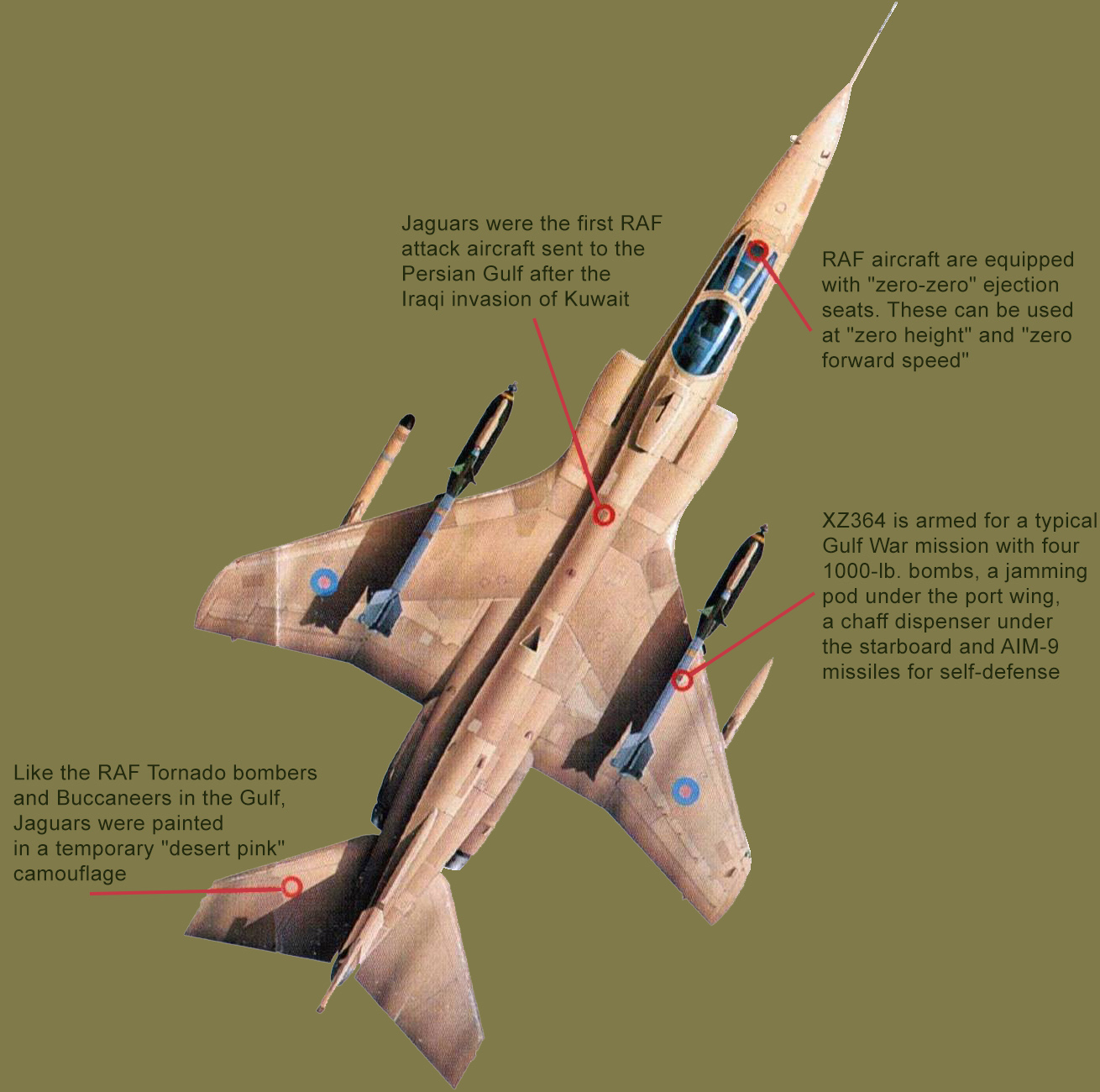 Weapons: Two 30-mm Aden cannon plus provision for two AIM-9L Sidewinder air-to-air missiles on overwing pylons plus up to 9,975 lbs. of underwing stores on five pylons. 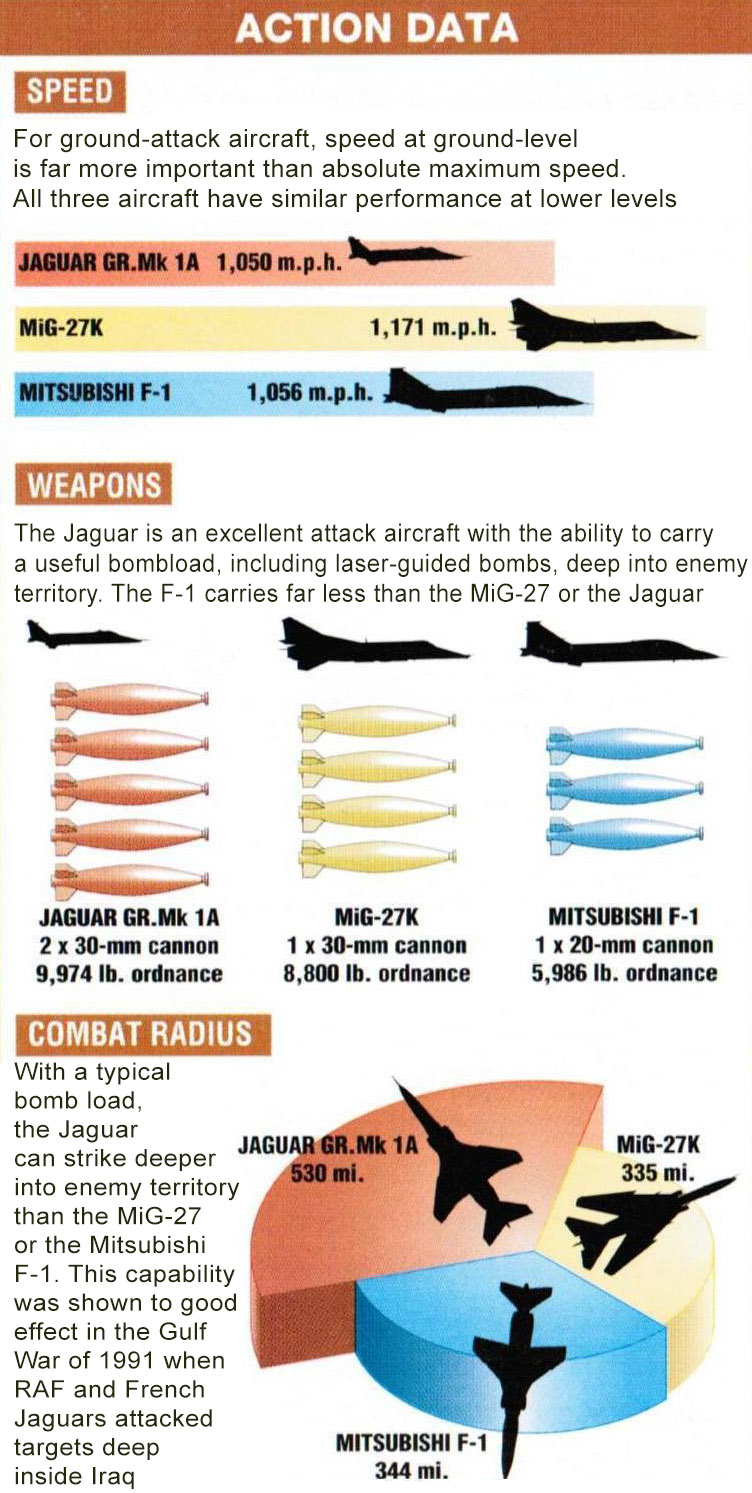 This GR.Mk 1 carries eight 1,000-lb. bombs, equivalent to the tonnage carried by a WWII-era B-24 Liberator bomber. A more normal load includes chaff and flare pods, fuel tanks and a pair of infrared missiles. 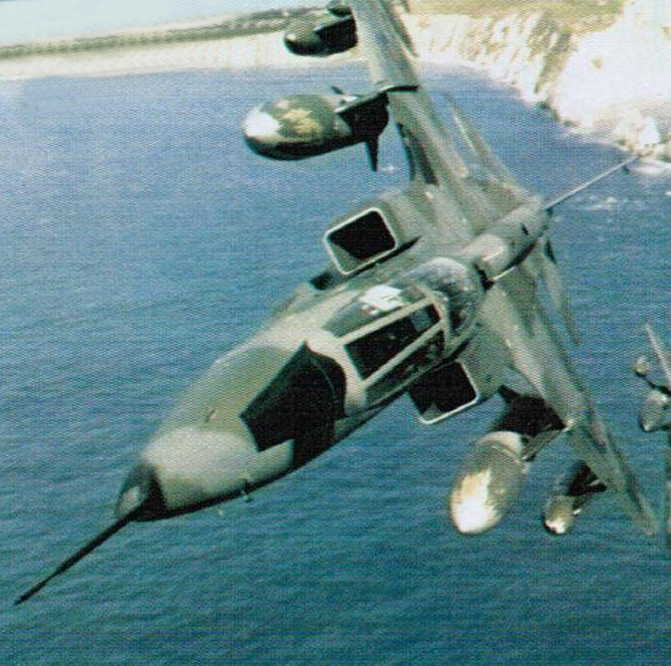 When originally delivered to the RAF, Jaguars were tasked with nuclear strike, reconnaissance and conventional attack. Only the latter role is performed today. 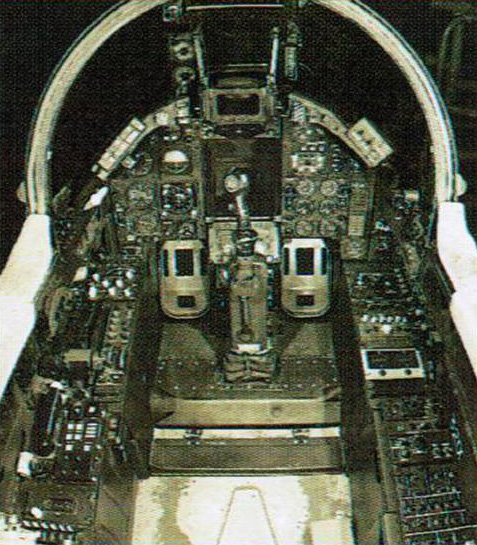 This pilot's eye view of a single-seater's cockpit shows that it is fairly typical of a jet fighter-bomber of the 1970s.

Taking off from a highway

Demonstrating its ability to operate from dispersed sites, this Jaguar lifts off from a stretch of highway with a load of cluster bombs. 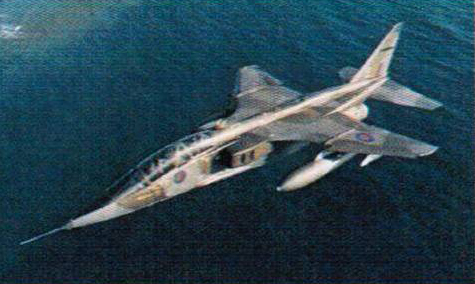 The two-seat conversion trainer version of the GR.Mk 1 features a longer nose with the crew seated in tandem under separate canopies.

▶ During the Cold War there were up to 5 RAF "Jag" squadrons in Germany, the theoretical front line in a major conflict.

▶ A Jaguar was once accidentally shot down by an RAF Phantom in Germany.

▶ Jaguars in the Gulf were armed with iron bombs, cluster bombs and rockets.

▶ The RAF Jaguars' home base is RAF Coltishall, home to three squadrons.

▶ An RAF Jaguar once survived a high-speed wire strike at an altitude of just 30 feet.

The Bell AH-1 Cobra is the first true armed helicopter, designed from the skids up as a rotorcraft gunship. Twenty-five years after bringing vertical warfare to Vietnam, the Cobra continues to reach out with lethal guns and missiles, halting the enemy in its tracks. Today the Cobra is flown by Marine pilots who use the AH-1's speed and power to fight and win, no matter what the odds. 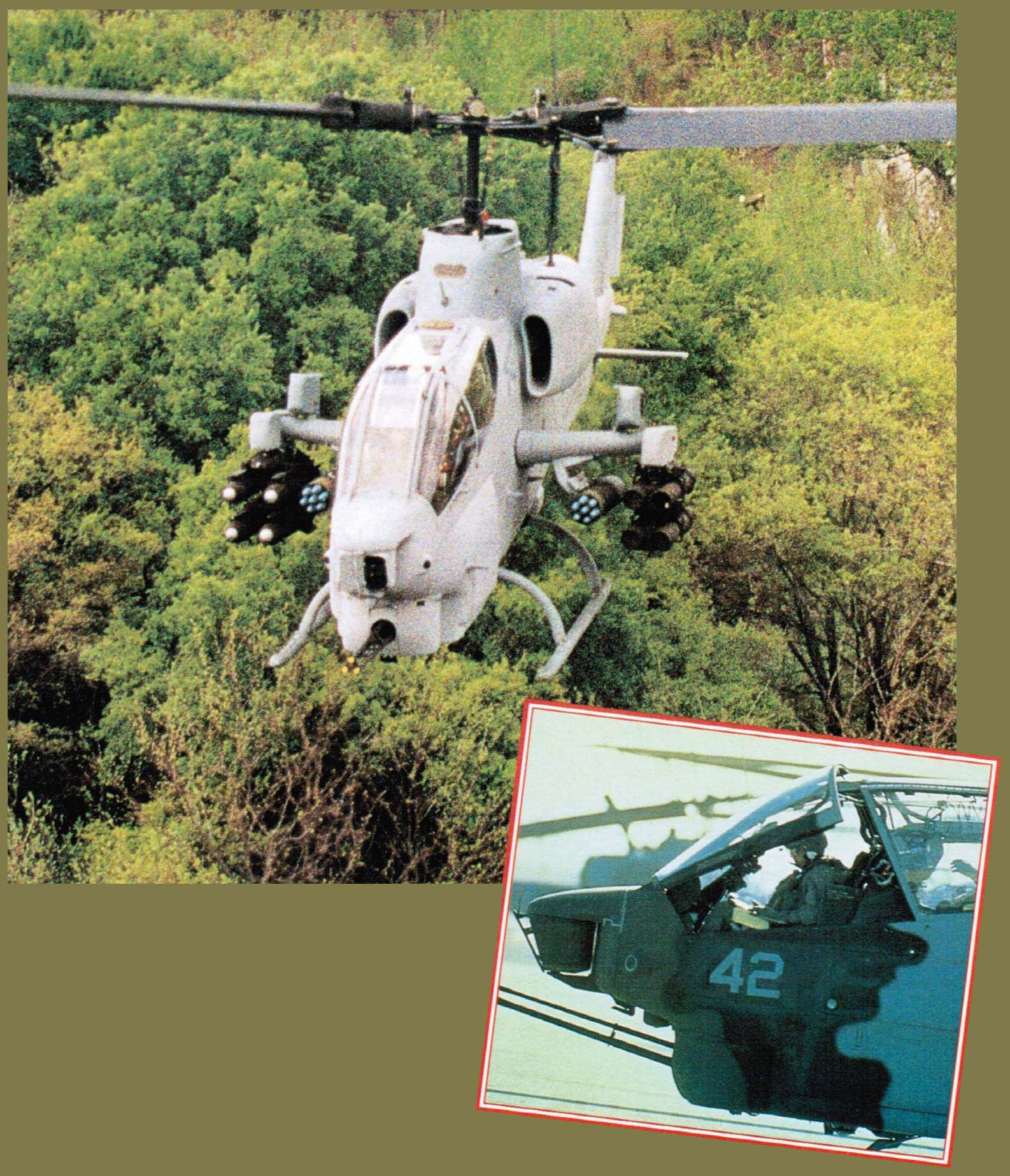 The Cobra gunner sits in the front cockpit. At his disposal is a fearsome array of guns and missiles that can be fired with frightening rapidity.

The AH-1 Cobra evolved from the famous Bell UH-1 Huey. When the AH-1G model arrived in Vietnam, it became the first rotorcraft designed specifically to carry arms to enter combat. With the helicopter's miraculous ability to leap in and out of tight places, and with a deadly powerhouse of weapons hanging under its stub wings, the Cobra is the infantryman's best friend.

New, hard-hitting Cobras are at work today. The U.S. Army introduced TOW missiles to fight tanks. The Marines went a step further with the laser-guided Hellfire missile, fired from many miles away to kill a tank with pinpoint accuracy.

Today, Marines use the AH-1W "Whiskey Cobra." This warrior in the high-tech battlefield is as formidable in many situations as the Army's newer Apache, which came along years later. The "Whiskey Cobra" excels at amphibious warfare, flying from ship decks or from land. Pilots of this thin, graceful ship praise its nimble flying qualities and its flexibility and fighting prowess. 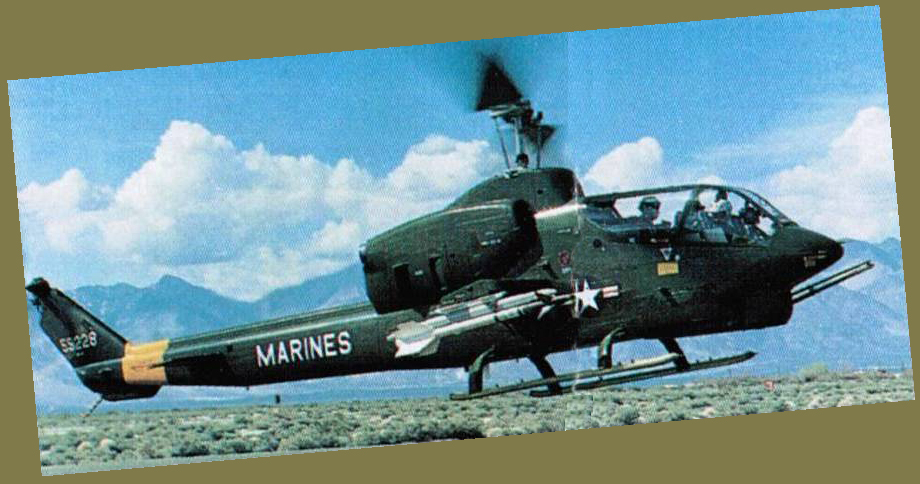 Helicopter killer - the Cobra can carry the Sidewinder missile on its stub pylons to shoot down other helicopters.

Spearheading the Marine assault is the AH-1W, sweeping ahead of the ground troops to root out enemy armor and artillery before they can do any damage. 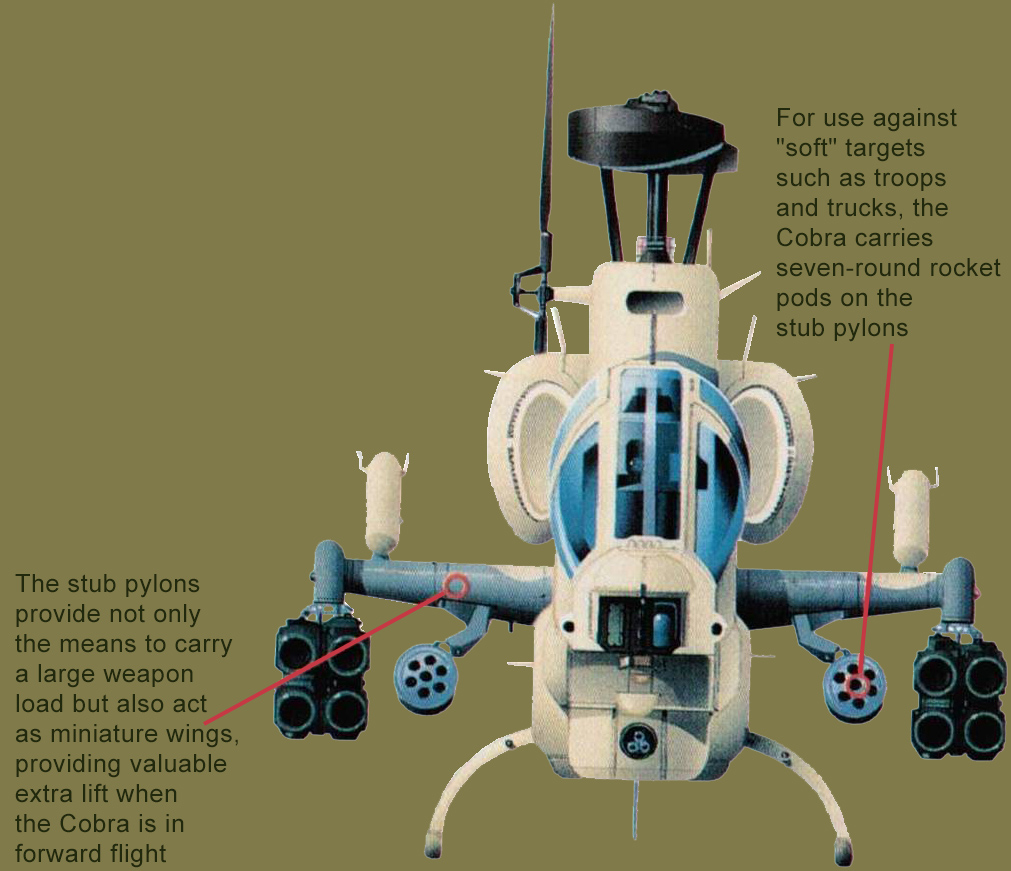 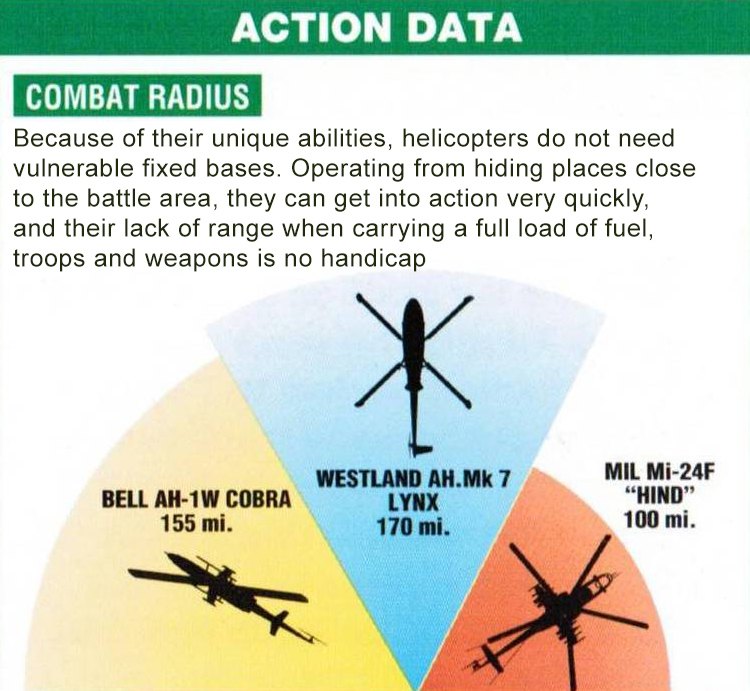 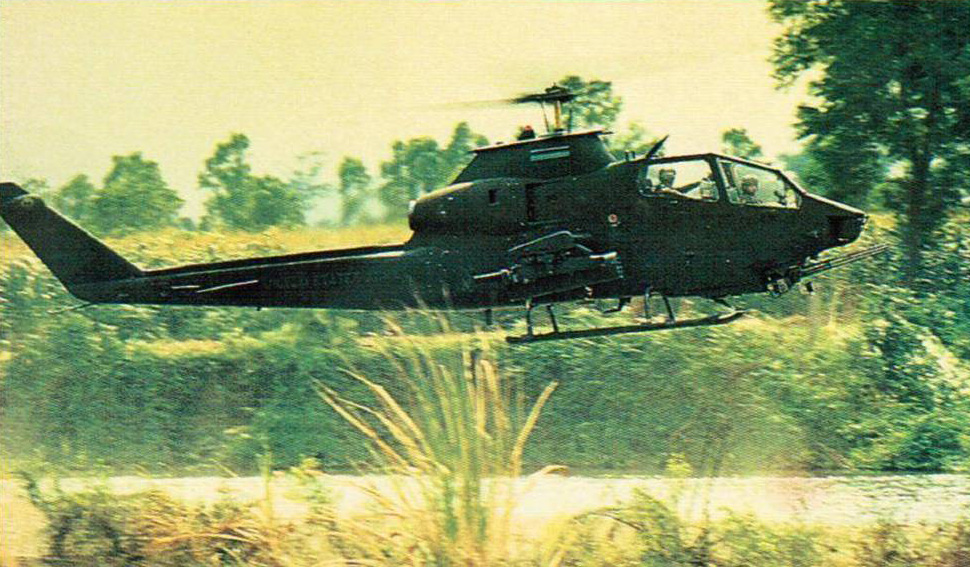 Like its serpentine namesake, the Cobra is designed to fight down among the trees and bushes where it can lurk undetected until it is time to rear up and strike. 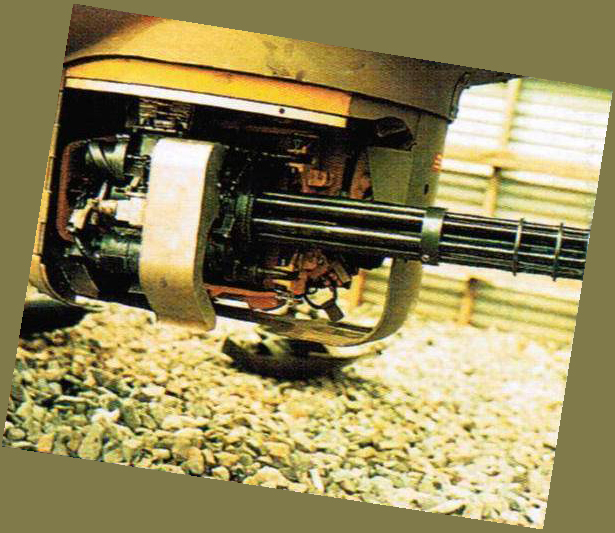 Early Cobras carried the Minigun, a six-barrel machine gun, which fired at rates of up to 100 rounds per second. Today the slower but harder-hitting M197 20-mm cannon is fitted. 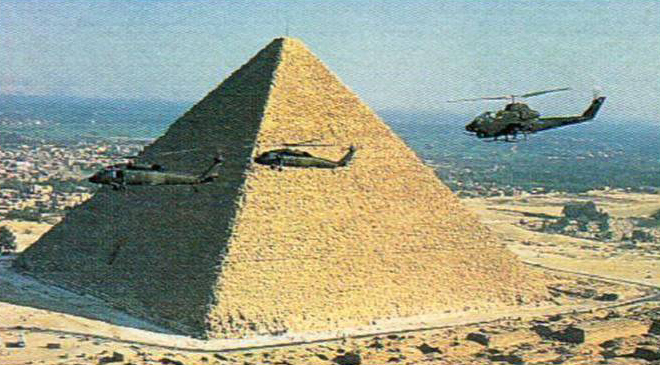 As well as taking out enemy tanks, the Cobra is charged with the vital task of escorting assault helicopters. These Army helos are seen on exercise in Egypt. 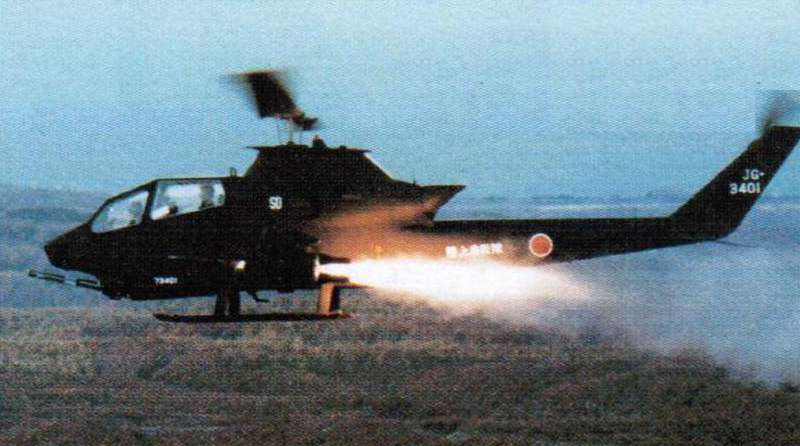 Although some Marine Cobras carry the deadly Hellfire, most AH-1s rely on the TOW missile. As soon as it has been fired out of its tube, small spring-loaded wings and fins pop out of the missile's body, allowing it to fly to its target.

When it is out of missiles, the Cobra can be rearmed in minutes by a well-drilled ground team. The TOW missiles are prepacked in their launch tubes and are strapped straight onto the helicopter.

▶ The Cobra's stub wing provides some of the lift that keeps it in the air.

▶ Cobra pilots use night vision goggles and electronic sensors to fight in darkness and bad weather.