Recognise the symptoms of nerve agent poisoning in yourself or others. This is necessary if you are to counter such poisoning by using the Combo Pen (CP) self-injection device. However, using it when you haven't been exposed to nerve agent may make you ill.

Nerve agent may be met in the form of a vapour which you can neither see nor smell, or as drops of oily liquid which will also give off vapour. The first you know that you have been exposed to nerve agent may be the onset of the symptoms listed below. We have put them under 3 headings but the order in which these symptoms appear will vary with their route of entry into your body: through the eyes, nose, mouth or skin.

◉ Pinpointing of pupils and dimness of vision (miosis).

Write down these symptoms and learn them.

You have to know:

b. The symptoms of Atropine poisoning.

Follow the correct drills for injecting yourself with the CP.

If you are poisoned by nerve agent you must immediately use your CP to inject yourself with drugs to counter the nerve agent. Thereafter take NAPS only on medical instruction. However, if you should in error inject yourself when no nerve agent is in your body the Atropine in the injection may itself be harmful. You must, therefore, know not only the symptoms of nerve agent poisoning but also those of Atropine poisoning.

b. A very dry mouth and throat.

When providing first aid, casualty bags may be used to protect personnel who cannot wear the respirator as a result of injury or illness. Use the bag if a casualty may be exposed to a contaminated environment when in route to treatment.

After masking, if any symptoms of nerve agent poisoning become apparant (see Task 9) give yourself one CP injection. If symptoms persist further injections at 15 minute intervals, up to a total of three, are to be made. Immediately seek medical aid. This drill has priority over everything but masking.

Remove the plastic cover from the CP by tearing at the tabs formed by the V at the safety cap end.

Pull the grey safety cap off the CP 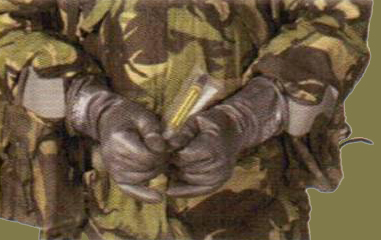 Place the black 'snout' of the CP against the outer thigh muscle midway between knee and hip, making sure that it is clear of anything in the trouser pocket, and press hard until the injector functions. Count to 10 slowly then withdraw. Record time CP administered.

Replace old CP in the haversack, bending the needle on any hard surface to make it fit. 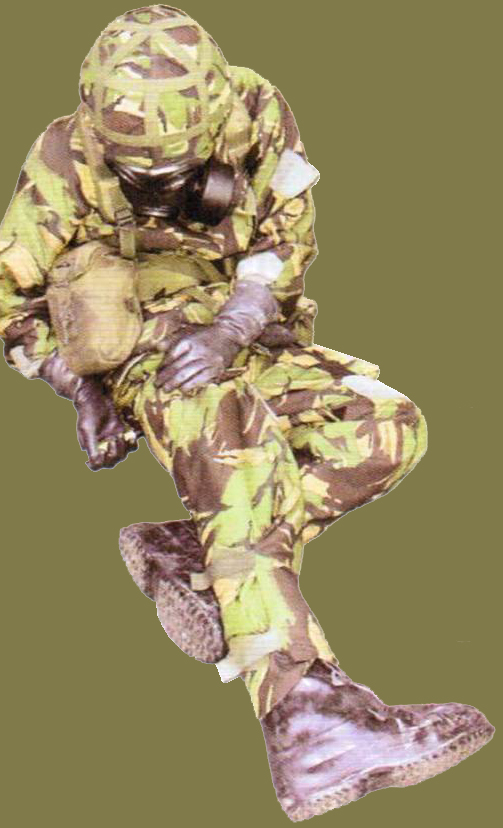 ◉ If you use any CP, report this to your Commander and seek medical advice at the earliest opportunity.

a. Practise the immediate self aid drill; a training version of the CP is available.

b. Learn the symptoms of Atropine poisoning.

a. Put the correct NBC IPE on yourself and casualty.

b. Decide which group of agents has caused the casualty.

c. Apply the correct first aid for that group of agents.

First you must protect yourself and the casualty from further agent by masking unless you are quite sure that the vapour has dispersed. If your position has just suffered a chemical attack you should be able to deduce the agent from information given by 3 colour detector paper (nerve or blister), LCAD/MCAD, CAM (nerve or blister), RVD (nerve, blister or unknown agent). If this is the case start treatment without delay. If the agent type is unknown you must deduce from which group of agents the casualty is suffering: nerve, choking, blood, blister or mental incapacitant. Each group requires different treatment.

Ensure the casualty has a clear unobstructed airway and has a properly sealed mask.

Checks Before Treating a Chemical Casualty 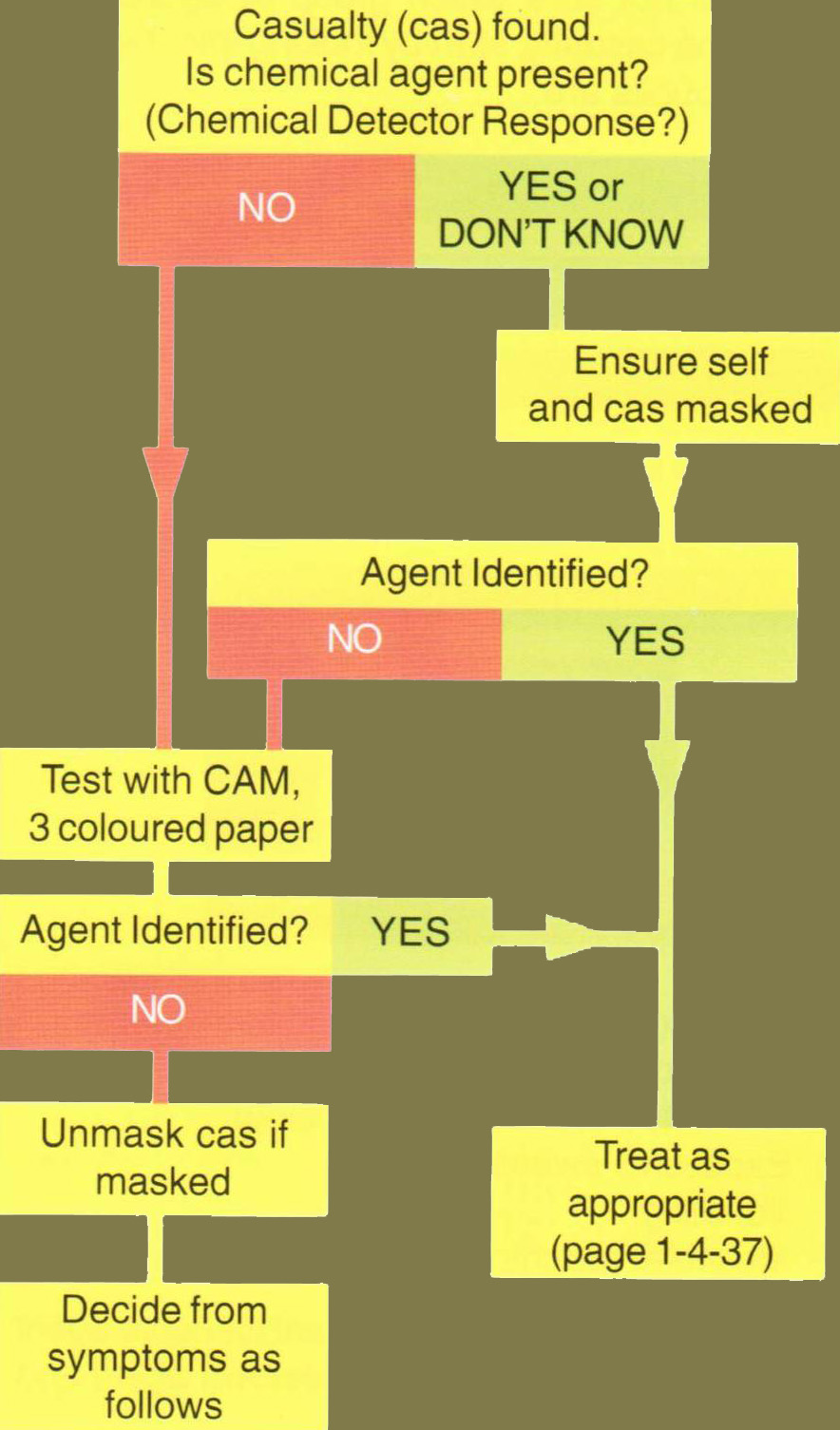 Deciding from Symptoms which Agent is Poisoning the Casualty

If you are not sure which group of agents has caused the casualty, start by looking into the eyes to see if pupils are: 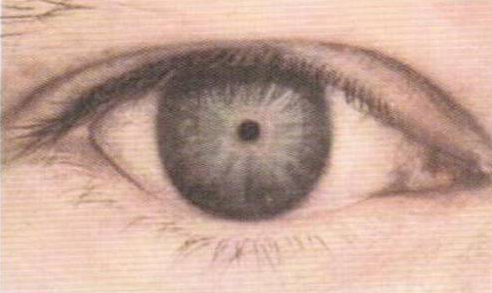 (2) Saliva or drooling at the mouth.

If several of these are present, treat for nerve agent (Task 10). If not, assume an unknown agent and evacuate to medical aid. 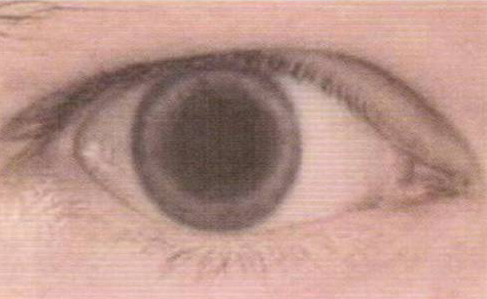 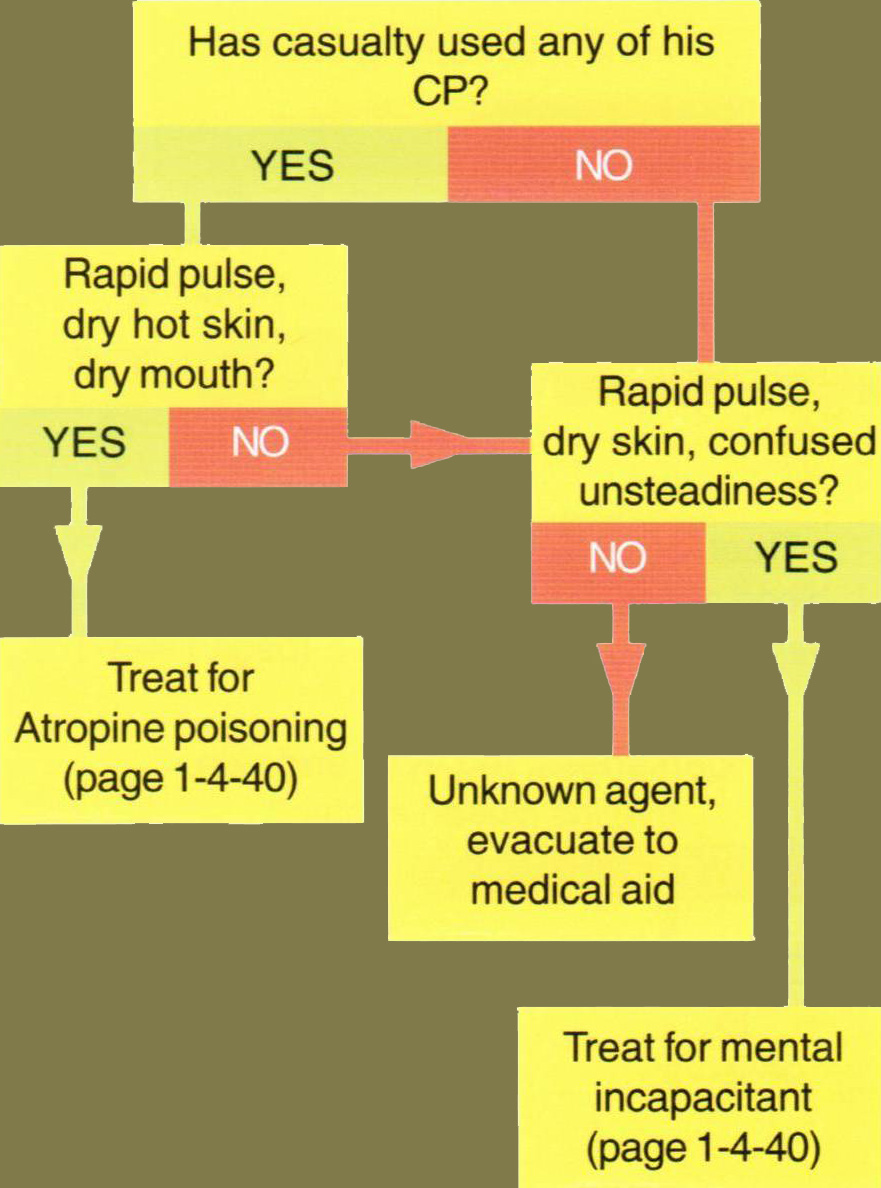 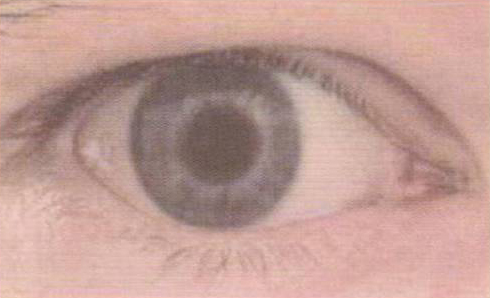 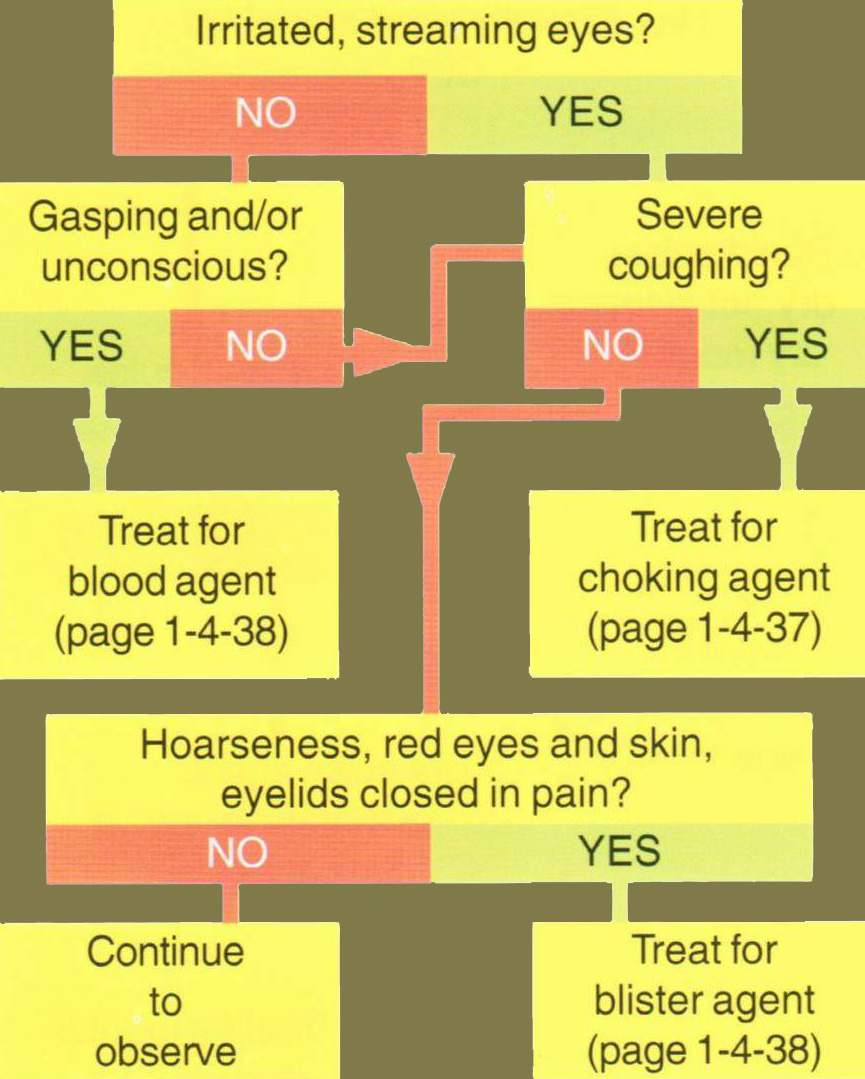 Once you decide which agent group has poisoned the casualty you can give the correct first aid treatment for that group. This guide tells you what to do. The enemy may, however, use a mixture of agents or new agents which you would be unable to recognise from symptoms. In this case evacuate to medical aid as quickly as possible. 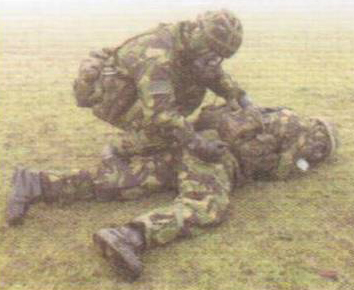 Make sure you and the casualty are in correct IPE.

Inject casualty with his own CP as in Task 10. Put used CP back in casualty's haversack.

Never give more than 3 injections at 15 minute intervals. 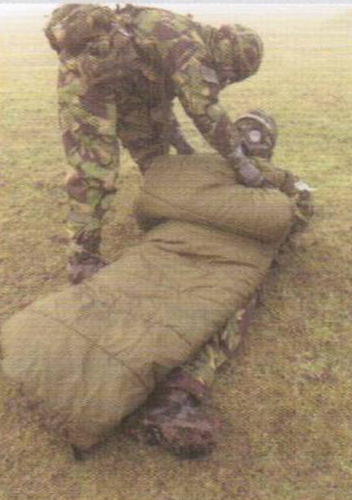 If not otherwise contaminated, remove the respirator and put the casualty in a casualty bag. Keep casualty out of wind and under cover, if possible.

Evacuate on stretcher to medical aid regardless of severity of symptoms. 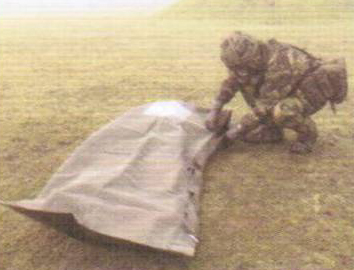 Make sure you and casualty are in correct IPE. Remember, blister agent will remain both a contact and vapour hazard for a long time.

If casualty has had agent in the eyes during the last 5 minutes, flush them with plenty of water. If more than 5 minutes have passed, leave them for medical treatment. Replace respirator. 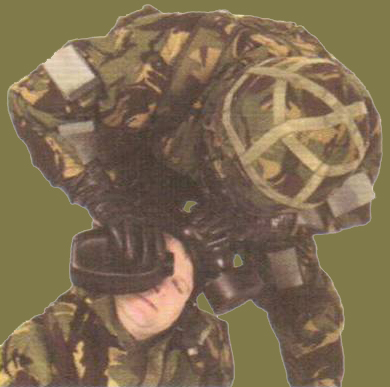 Decontaminate suspect areas with DKP 1 and try to swab off Fuller's Earth powder with water. Check in particular for reddened skin around hairline, behind ears and on hands. 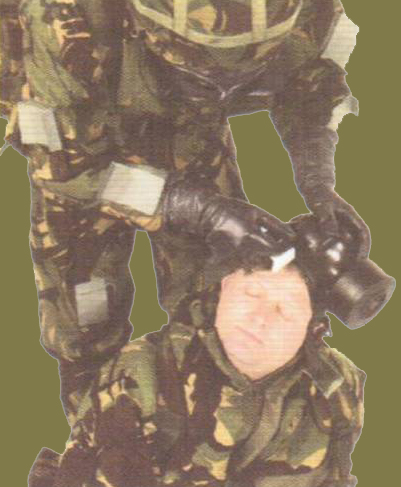 Dress any blisters with casualty's shell dressing after first decontaminating the skin. Cover with chemical proof material. On no account break the blisters.

Try to get him to drink. 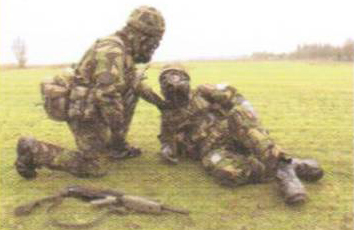 a. Copy out the first aid for each group of agents until you know them without looking.

b. Practise on exercises.

TASK 12. EATING AND DRINKING IN IPE

Follow the correct procedure for eating and drinking safely while wearing a S10 respirator in a vapour hazard.

Some NBC agents will persist for hours or days. If you cannot move to a clean area and decontaminate or use collective protection you will have to continue to wear full IPE. Sooner or later you will have to break the protective seal of your IPE to eat. Because eating will expose you to chemical agent it is hazardous and is only to be carried out if absolutely necessary. Emergency procedures therefore apply.

You need to be under cover or have confirmed that liquid agent is not falling.

Food should be stored under cover away from liquid agent and only food in tins or wrapping which is resistant to chemical vapour should be eaten.

While you can survive for some time without food you need to drink frequently, particularly when working in full IPE. The S10 is designed to permit you to do this safely even when in a vapour hazard area, but you must follow the correct sequence: 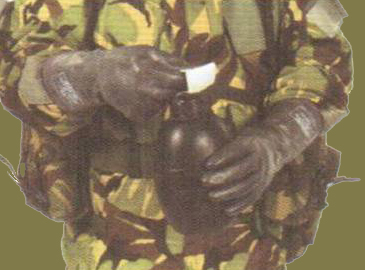 Remove the water bottle, make sure it contains water by shaking it, put it on an uncontaminated surface. 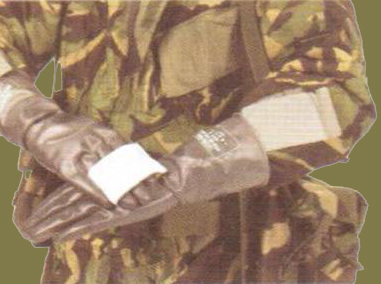 Remove stopper from bottle cap. Withdraw DCM from its holding. 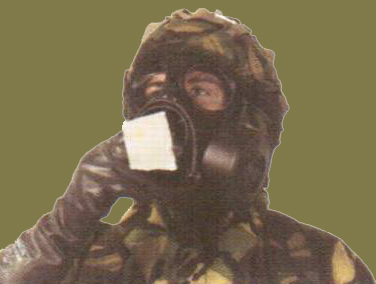 If liquid present decontaminate the mating surfaces on DCM and bottle cap.

Tap the DCM against the bottle cap to remove any Fuller's Earth then insert DCM into the cap WITH ENOUGH PRESSURE TO OPEN THE VALVES. 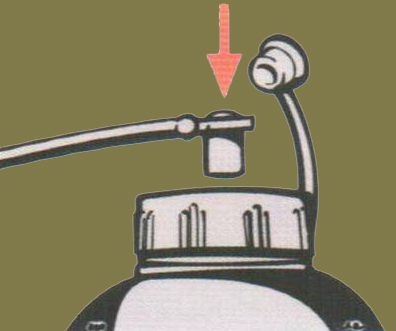 Twist the DCM a quarter turn to help locate it correctly. 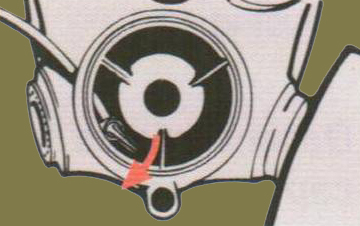 Turn the lever on the shut-off valve spindle FULLY ANTICLOCKWISE (relative to wearer) both to position mouthpiece in the mouth and to open shut-off valve. 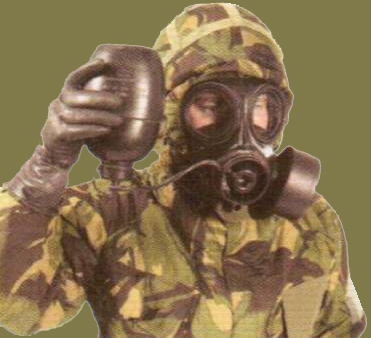 Turn the water bottle upside down and blow gently through the mouthpiece to create an overpressure.

Drink the water you need, then, continuing to hold the water bottle, turn the lever FULLY CLOCKWISE to close the shut-off valve and remove the mouthpiece from your mouth. 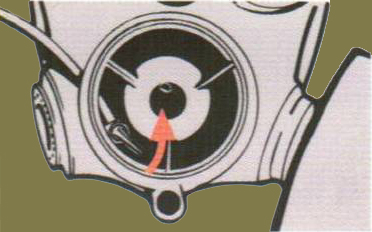 Turn the water bottle the right way up and remove DCM from cap. Place on a clean surface.

Decontaminate the DCM and its housing in the respirator. Wrap the drinking tube around the PSM and place in its housing. 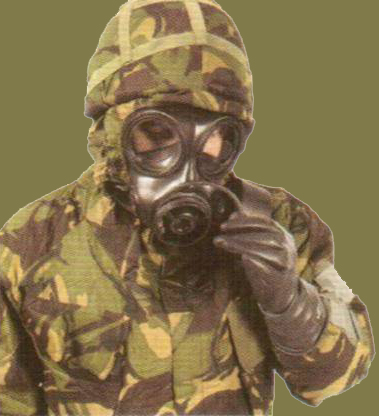 WARNING: Only water may be taken through the drinking device or it will become blocked. In the case of a blockage, drink following the drill for emergency eating (see below) first decontaminating the mouth of the water bottle. 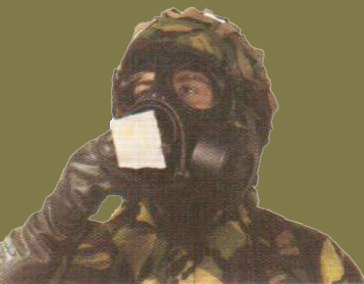 Close eyes and lift respirator by PSM away from face and upward to expose mouth.

Bite a small quantity and put under your tongue.

Replace respirator and blow out. 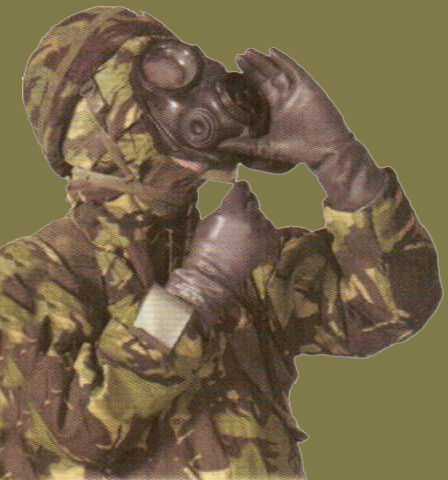 Practise the procedure for eating and drinking in a vapour hazard.