The following codewords are used to convey warnings of possible terrorist activity in Great Britain (GB).

Used to warn of non-specific forms of terrorist activity.

Used to warn of a threat of terrorist use of Surface to Air Missiles (SAM) and/or Anti-Aircraft Machine Guns (AAMG) against Service aircraft.

There are 4 BIKINI Alert States which, in ascending order of severity, are listed and defined below:

◉ Black. The standard level of security that will always be in place to address the ever-present threat from domestic and international terrorist organisations.

◉ Amber. Domestic or International events suggest that there is a heightened threat to government at this time from domestic or international terrorists seeking to act to exploit or react to these events.

◉ Red. This alert state will be applied at a location in the event of a significant security incident, such as the discovery of a suspect package or suspect vehicle. The emergency services are likely to attend at the scene.

There are 4 TESSERAL Alert States which, in ascending order of severity, are listed and defined below:

◉ Black. A general warning of possible terrorist attack against aircraft by extremists armed with man-portable SAM or AAMG without any particular target being defined. This Alert State is the minimum to be applied while terrorist organisations are assessed as posing an active threat to aircraft by SAM or AAMG attack in GB.

◉ Black Alpha. A general warning that there is an increased likelihood of extremists armed with man- portable SAM or AAMG attacking an aircraft at an unspecified location in GB.

◉ Amber. A warning that extremists armed with man- portable SAM or AAMG intend to attack an aircraft in GB in the near future. It could be issued as a general or local warning and would normally be applied for a limited period only.

◉ Red. A warning that an attack against an aircraft in GB by extremists armed with man-portable SAM or AAMG is imminent. It will normally only be issued as a local warning and for a very limited period.

The full definition of each Alert State and suite of counter- measures to be implemented is restricted information. Contact your Unit Security Officer, if further details are required.

◉ Confirm. Location and description of the device. Do not touch or disturb it. If in doubt, treat as suspicious.

◉ Clear. Do not waste time or risk life for property. Evacuate area by the quickest route. Leave all doors open to allow EOD access.

The enemy is looking for you. Do not make it easy. Merge with your surroundings.

◉ Shape. Blend in with your surroundings and lose your shape.

◉ Shadow. Keep in the shadow of a bigger object and be aware as to where your shadow is cast.

◉ Silhouette. Do not stand against a skyline or lean out of windows.

◉ Texture. Do not contrast with your surroundings or shine.

◉ Movement. Movement must be slow and cautious.

◉ Do not sit in the sun, but remain in shadow when in a position likely to be overlooked by an enemy.

◉ At night do not smoke, light fires or use torch light unless permission is given.

◉ Wear and replace cam cream as the threat dictates.

You need to be able to recognise an attack directed against you and take the correct actions to protect yourself, return fire if appropriate and report the contact.

◉ Dash to the nearest cover.

◉ Get down, crawl into the position and observe.

◉ Check that the weapon sight is correctly set and fire at any visible enemy (ROE permitting).

◉ Full use of personal weapons.

◉ Cover from view and a concealed route in and out.

◉ An unobstructed view of a wide and deep arc of fire.

This minimises radio traffic except for further contacts and contact reports. As soon as possible a full contact report must be sent. If using a landline or other means of communication, use the same principles.

WHY THINGS ARE SEEN

◉ Move the head rather than just the eyes to minimise fatigue, but be aware of giving your position away by sudden movement. 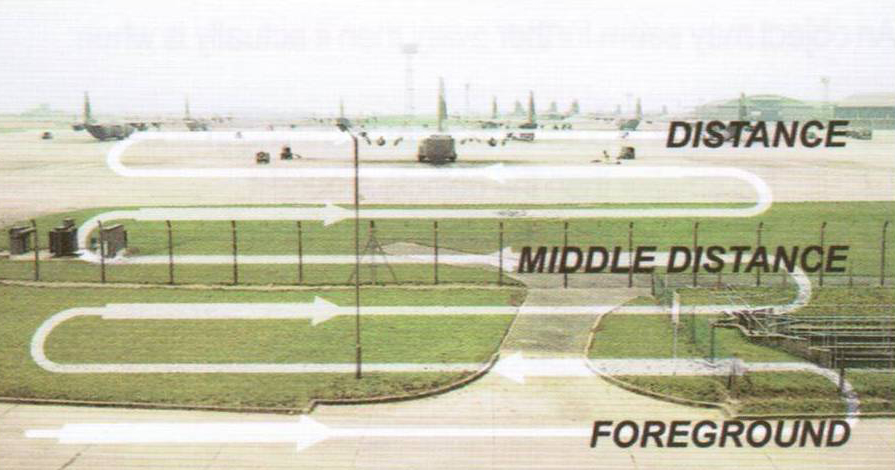 ◉ Work using red light, if suitable to the task, as this will not affect your night adaptation.

◉ Objects can be seen better at night if you do not stare straight at them. Look above, below or to the side of an object.

An object may seem closer than it actually is when:

◉ The light is bright or the sun is shining from behind you.

◉ It is bigger than the objects around it.

◉ There is dead ground between it and you.

◉ It is higher than you are.

An object may seem further away than it actually is when:

◉ The light is poor or the sun is shining in your eyes.

◉ It is smaller than the objects around it.

◉ You are looking across a valley or down a street.

◉ You are lying down.

◉ All the ground between you and the target must be visible to use this method.

◉ Any unit of measure that is familiar to you can be used, for example a football pitch which is approximately 100m long.

◉ Estimate how many units of this measure can be fitted between your position and the target.

◉ This method is not reliable for ranges in excess of 400m. 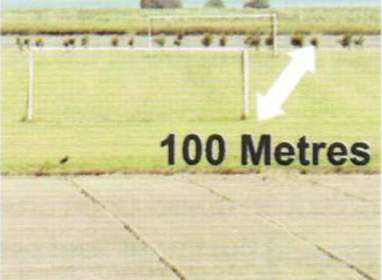 ◉ This method compares an object with its surroundings.

◉ You must know what objects look like at various ranges.

◉ A good indication is given by the amount of detail visible.

At 200m - clear in all detail, colour of skin and equipment identifiable.

Use one of the 2 methods of judging distance to estimate:

◉ The maximum distance to the target.

◉ The minimum distance to the target.

Take the distance to the target as midway between your maximum and minimum estimates.

This is a known area where targets are likely to be. It is indicated in the following sequence:

◉ Axis. The Centre of arc.

◉ Left and Right Arc. Indicate the extent of the arc.

◉ Reference Points. Prominent and permanent objects that are given a name and range i.e., church - bottom right corner - to be known as church - range 200.

Used to indicate obvious targets. The range, where to look and a description are given. 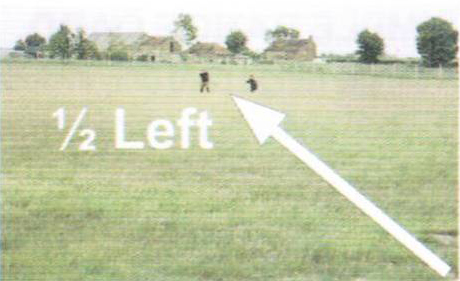 Used to indicate less obvious targets. It may be used together with the Direct Method and words such as above, below, slightly, left or right. 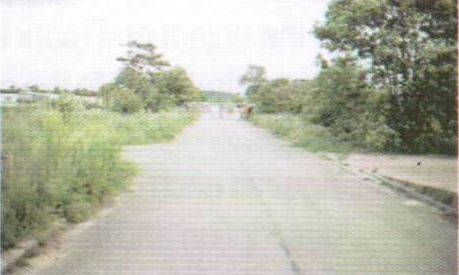 Used with an imagined clock face on a reference point to indicate difficult targets.

A simple range card only includes objects to the front of a position and is built up as follows:

◉ Accurately describe the central point from which the card has been made out.

◉ Put in the range that each circle is to represent.

◉ Choose one unmistakable object to the front, mark it on the card and draw a thick line to it. This is the setting ray.

◉ Decide on the few objects to be recorded.

◉ Fold the card, hold it level with the eye and line up the setting ray. Hold a pencil upright in the direction of the object and mark the card. Draw a line from the central point to the object and to its correct range.

◉ Against each object, print horizontally, a short description and its range.

◉ Fill in the information required, date and sign it. 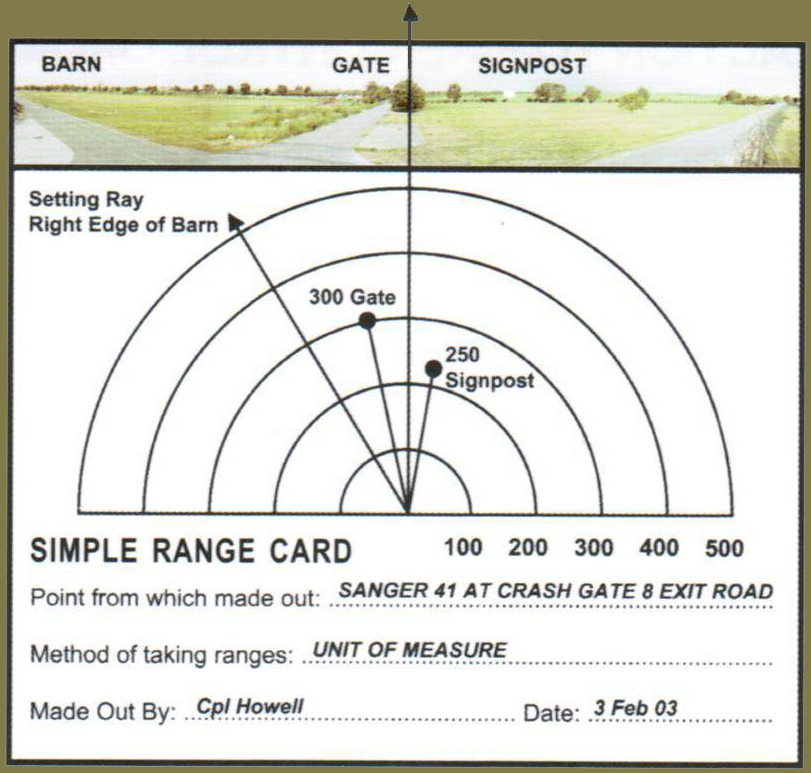 This is made if the position is permanent or one that will be occupied for a long period. It normally includes objects all around the central position. The card build up is the same as for a simple card. More accuracy is achieved by the use of a compass, protractor and map. 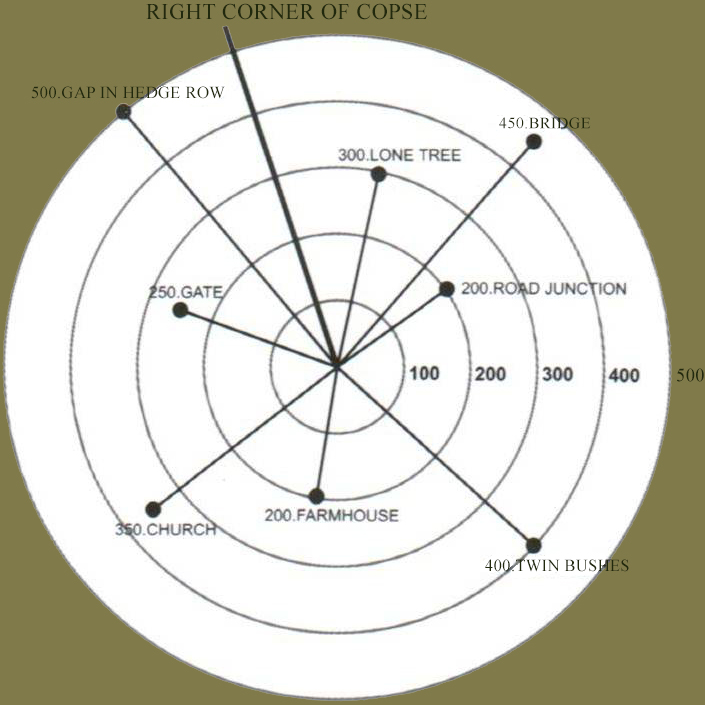 Having identified a target, Fire Control Orders (FCO) are used to bring fire to bear quickly and effectively. The sequence of a FCO is as follows (GRIT):

◉ INDICATION. This indicates where and what to look for.

Given when there is little time and the target is obvious. "Delta fire team - quarter right - rapid - fire".

Given when the movements of friendly forces or the enemy are known or can be guessed. "Section - 300 - signpost - right 3 o'clock - 2 trees - gap in trees - await my order - fire".

Given when it is impracticable for the commander to control the time to open fire so he passes the responsibility to the individual(s) concerned. "Number 2 and 3 - 300 - gate - enemy crossing gate left to right - watch and shoot".

Ensure that the FCO given to direct fire legally, is permitted by the Rules of Engagement in force

The following information and equipment must be made available to the sentry:

◉ Location of post, neighbouring posts and own backup/covering sentry.

◉ Length of stay and time of relief.

◉ Arcs of observation and fire.

◉ Method of alerting own forces.

◉ Friendly patrols - times out and in.

◉ Enemy Personnel. In or out of uniform who carry arms openly.

◉ Crews. From merchant ships and civil aircraft belonging to the enemy.

◉ Search. All arms, equipment, maps and papers (except ID cards and ID discs) are to be removed. These are to be identified with the prisoner and the weapons (after having been made safe), evacuated with the PW whenever possible.

◉ Segregate. Officers, NCOs, Other Ranks, females from males, and juveniles (under 15) from both.

◉ Escort. To unit or sub-unit HQ as directed.

ACTION AT UNIT OR SUB-UNIT HQ

◉ Remove and tag or label: Weapons, documents or equipment captured with the PW.

◉ Safe custody: Treat humanely, shelter PW from enemy fire and the elements, provide food, water and protective clothing, move PW out of the combat zone as soon as possible.

◉ Do not fraternise with PW.

Current UK policy is for PWs to comply with the 1949 Geneva Convention III on the treatment of PW, under which you are bound to give only 'surname, first names and rank, date of birth and any service number or failing this, equivalent information'. This information is known as the Big 4.

Additionally an individual's blood group and religion have been included on ID discs since 1907, and are therefore freely available to a captor.