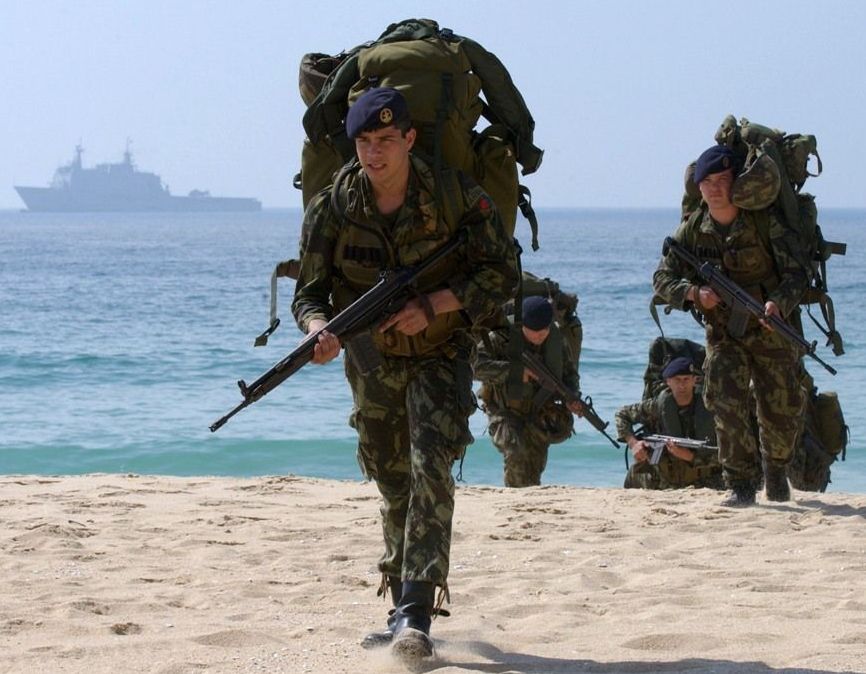 The Portuguese Marines ("Fuzileiros") have their direct origin in the oldest permanent military unit of Portugal, the Regiment of the Navy of the Crown of Portugal ("Terço da Armada da Coroa de Portugal"), created in 1618. However, since 1585, specialized troops existed to provide artillery and riflemen in the Portuguese warships. The Regiment of the Navy was soon considered an elite unit. As the King of Portugal did not have a royal guard (only the ceremonial Royal Guard of the Halberdiers), this Regiment was also used in the role of bodyguard of the Monarchs. 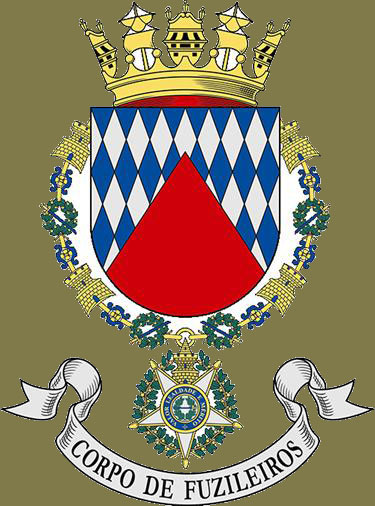 The Coat of Arms of the Portuguese Marine Corps is headed with the Portuguese naval crown, and shows the "Ordem Militar da Torre e Espada do Valor, Lealdade e Mérito" ("Military Order of Tower and Sword of Valor, Loyalty and Merit"), the motto is: "CORPO DE FUZILEIROS".

The Fuzileiros use to wear the camouflage, which is most commonly associated with Portugal - the "vertical lizard" pattern, which was developed in 1963 and introduced in 1964 (commonly referred to as the M1963 (M1964) or m63 (m64) by collectors). 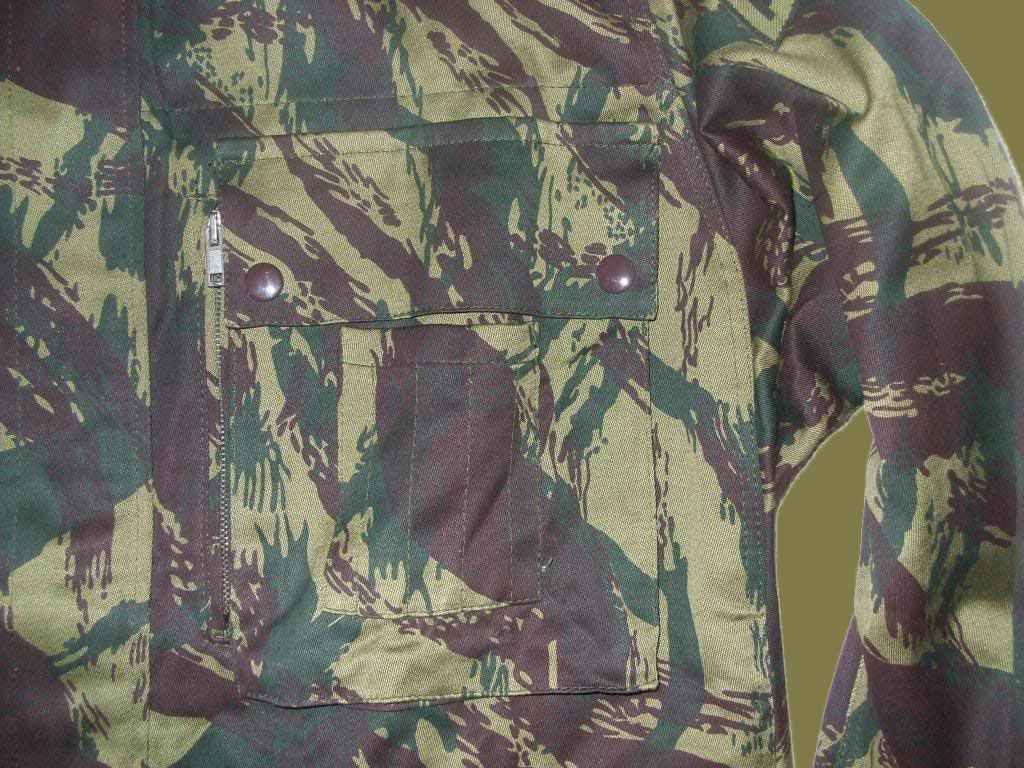 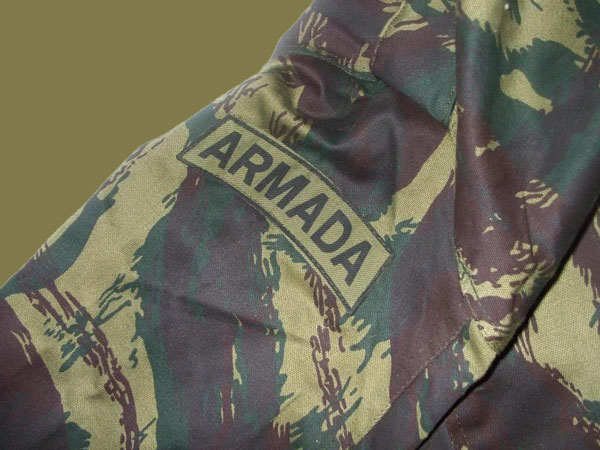 Indeed, the original Portuguese design seems to have been copied directly either from the original drawings or from a sample of French fabric, probably from an early TAP Mle 1947 airborne smock. Interestingly, however, whereas the stripes of the French patterns are consistently oriented in a horizontal manner, the Portuguese designs (from the earliest to the most current) have always had a definite vertical orientation. 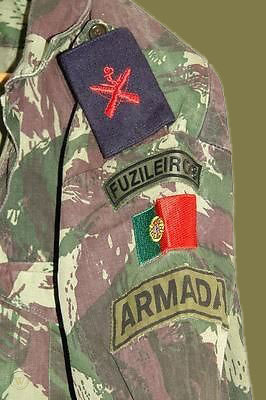 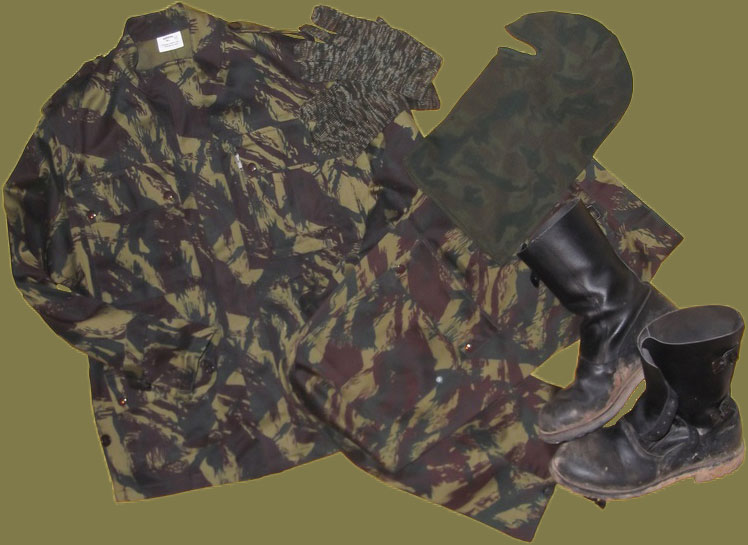 This "vertical lizard" design changed little once the wars in Africa (which ran from 1961 to 1974) were over, but continued to see service primarily amongst elite units such as the Commandos and Operações Especiais (Special Operations units).

In the year 2000 all units of the Portuguese Armed Forces were outfitted in a single camouflage pattern, which remains standard issue today. The only version of the original m63 design to survive into the present era is worn by the Fuzileiros Navais (Naval Infantry), which are the only remaining primary user of the "vertical lizard" pattern today. This again is a slight color variation, having primarily chocolate brown and dark green stripes on a dark khaki background. 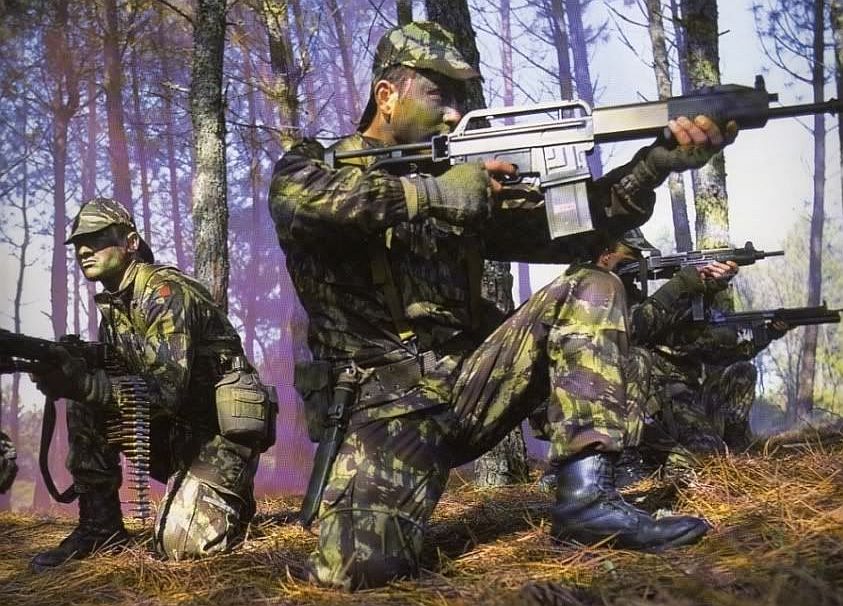 Nowadays one can see the Portuguese Marines in the laced boots and the locally-produced copy of British DPM, known colloquially as "Padrão Floresta" or "forest pattern."

The Portuguese version of DPM consists of black, brown & foliage green disruptive shapes on a tan background and would ultimately be produced in several styles of uniform, catering to the environment in which personnel were to be deployed. In all there up to ten different versions of the Portuguese DPM -type camouflage, both for woodland and desert environments.

The Fuzileiros wear the dark blue beret with their branch emblem. 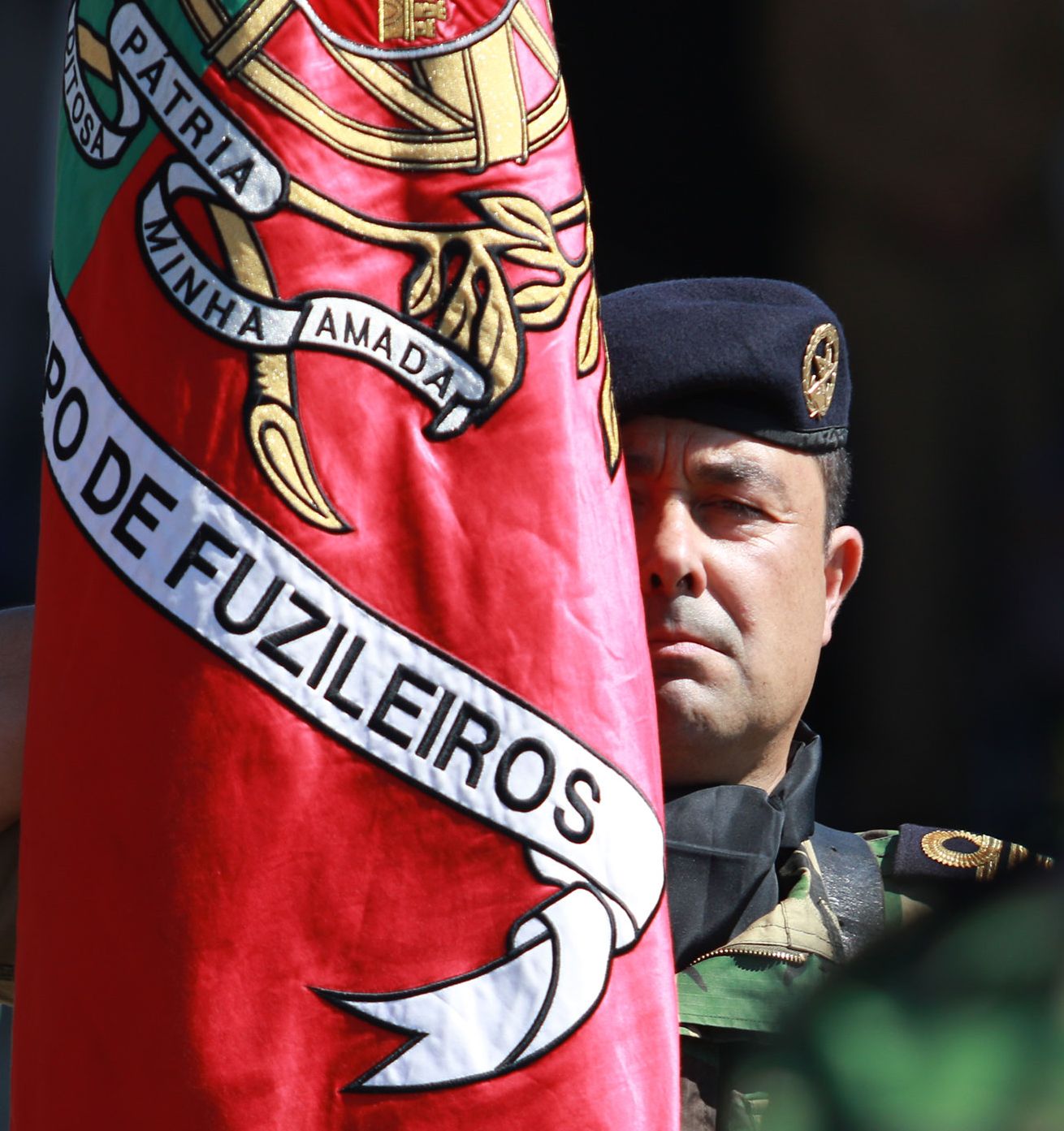 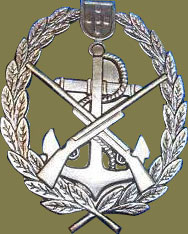 Along with the Portuguese "vertical lizard" camouflage pattern uniform there are the Marines disembark (landing) boots ("Botas m/967") which are another most characteristic feature of the Fuzileiros. 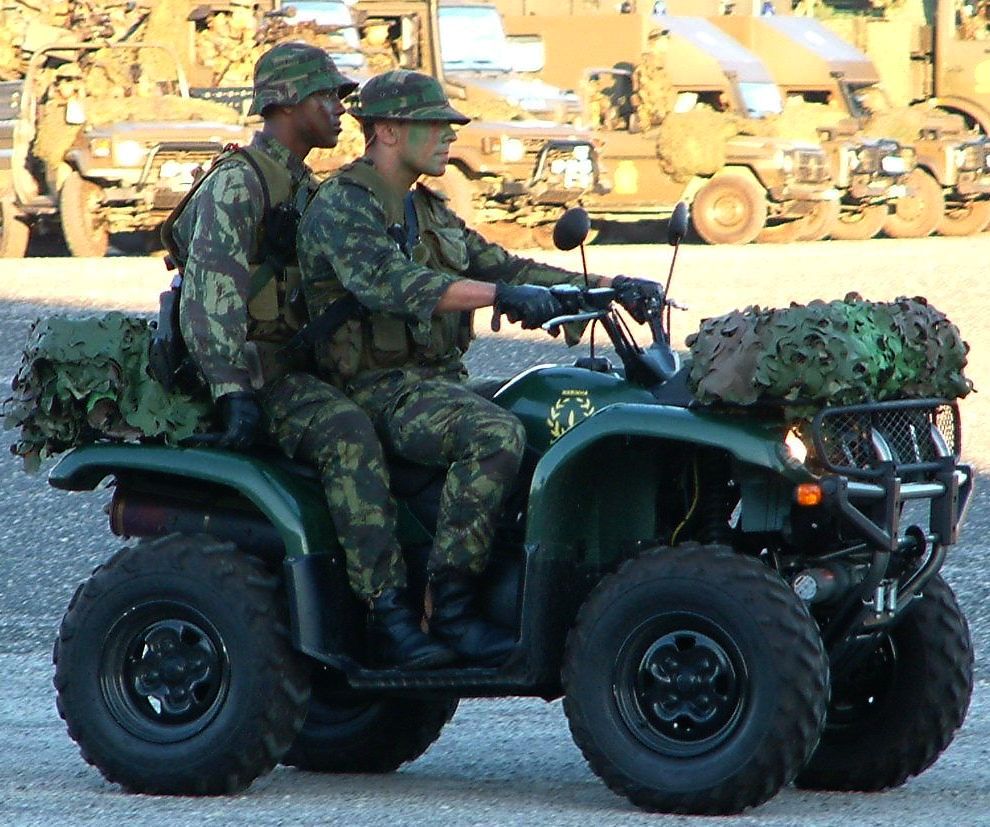 "Botas m/967" are actually a kind of "quick release" high boots with two leather straps, each of which was fastened with clasp of single buckle instead of textile laces. These high-boots were made of thick and rigid grained leather. The boot's flap is "closed", i.e. stitched to the boot's top.

According to the Portuguese (and Spanish as well) military equipment designation system the name "m/967" stands for the boots model 1967, in other words, the year is indicated without the first digit (one thousand). This is quite an interesting peculiarity of the year designation in Portugal and Spain.

These boots were intentioned for the Portuguese Marine Corps, and they represent by themselves a unique whole boot design, the purpose of which was to prevent the water ingress inside the boots during landing operations… 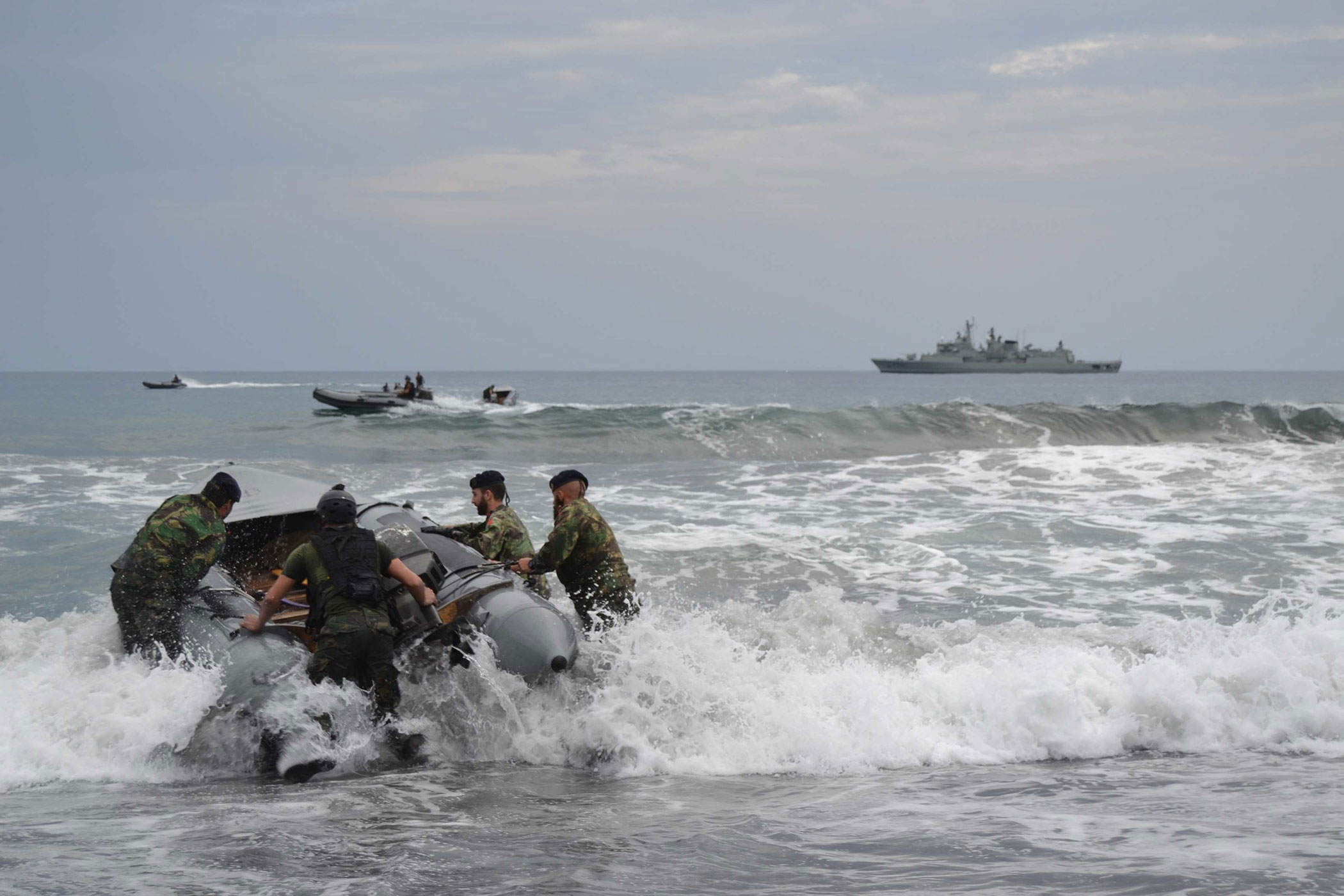 Frankly speaking, it's hard to believe that these boots are high enough to prevent the water entering into them from the top side, especially during the landing operation from the sea side.

The American military approach is opposite: they allow easy water getting in and out of the boots ("jungle boots", for instance) and provided built-in double screened eyelets system at the inside shank of each boot for this purpose. These brass drainage eyelets were intended not only to allow water to drain out , but to permit air to reach the feet inside the boots and dry the feet as well.

The eyelets work well in a system with a quick-drying leather / textile upper for jungle boots and a mesh woven "SARAN" insoles.

Actually, the Portuguese Marines disembark (landing) boots are the special version of the m/967 high-laced boots used by the country's Army and Air Force.

As distinct from the laced combat boots, the m/967 lack laces and lace eyelets and instead are fastened with leather straps..

The soles are of the French "Rangers"-type pattern are stitched, they also have reinforcing metal toe-piece. The markings (where the size number is the last two numerals) are indicated inside the boots.

The typical marine boots have two straps and the toe piece leather borders the cuff piece evenly. Such are m/967 boots manufactured by "OGFE" ("Oficinas Gerais de Fardamento e Equipamento"), a Portuguese State Company, and some other private companies.

In turn, the Marine landing boots by "BIS Portugal" feature three straps, the toe piece protrudes into the cuff piece and are distinctively marked on the soles.

The m/967 boots were used during the Portuguese Colonial Wars. After Portugal granted independence to the Portuguese Guinea, Angola and Mozambique, it was no reason to transport the large stocks of the uniform and boots, so these stuff was just left behind. In such a way the Portuguese Marines disembark boots were widely used by different sides during a series of local civil wars and conflicts, and even during the Border War by the South African troops and during the Bush War by the Rhodesian forces for the for false flag operations and other undercover activities. 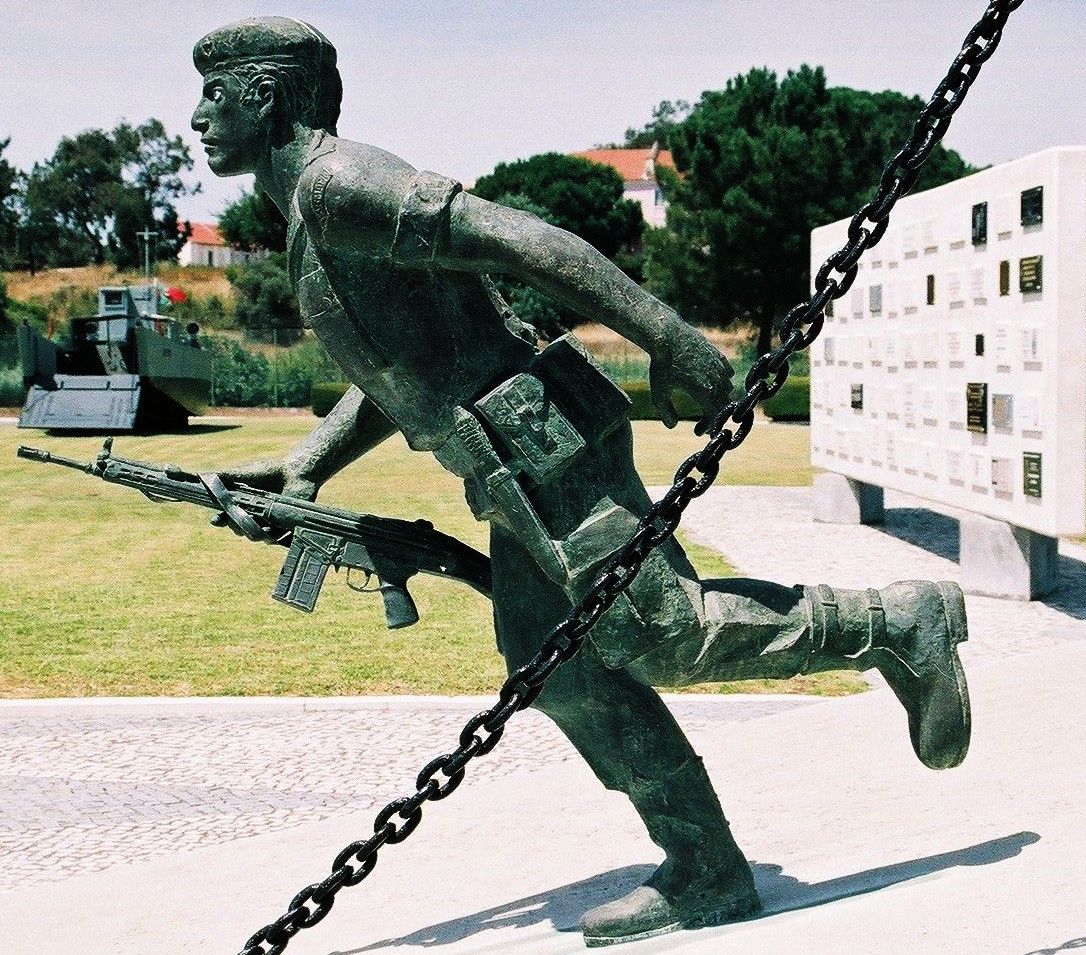