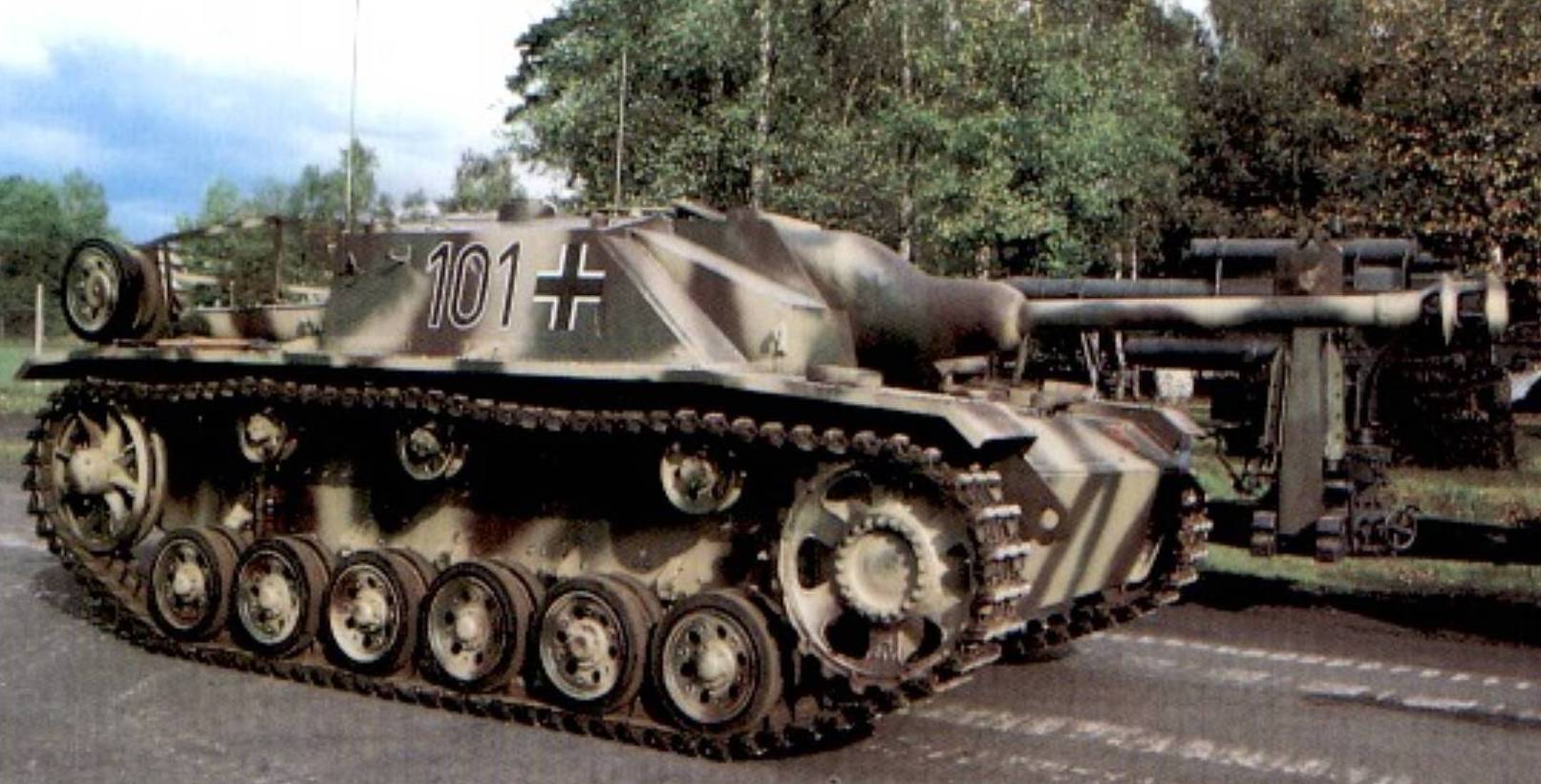 A well preserved SdKfz 142/1, Sturmgeschütz 40 Ausf G in the Panzermuseum collection at Munster-Oertze Germany. This was the last of the StuG series of tank destroyer/assault gun which began production at the end of 1942. (Panzermuseum) 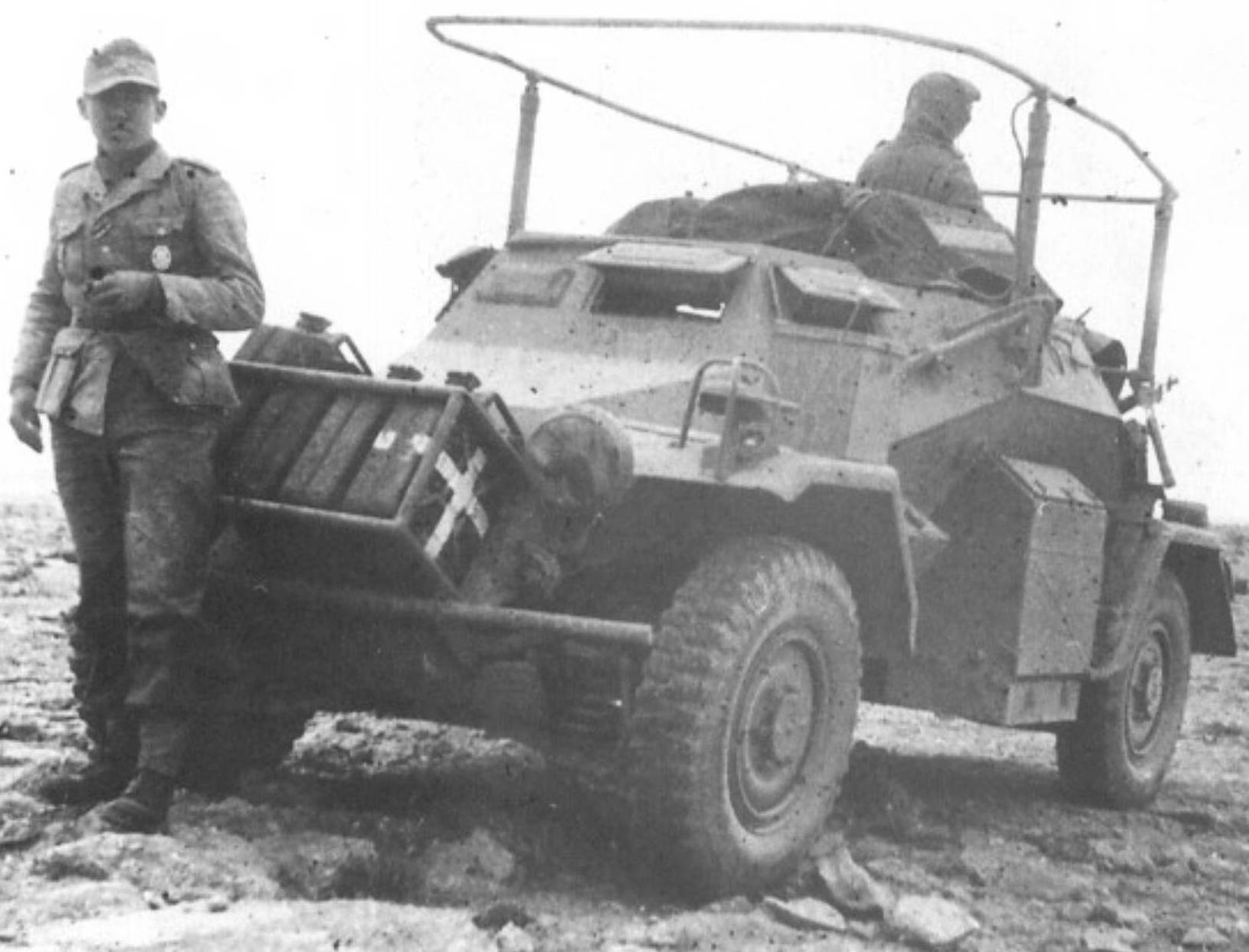 The radio version of the SdKfz 222, was known as the SdKfz 223 leichter Panzerspähwagen (funkwagen) and entered service 1936. Note the frame-type aerial. (GF) 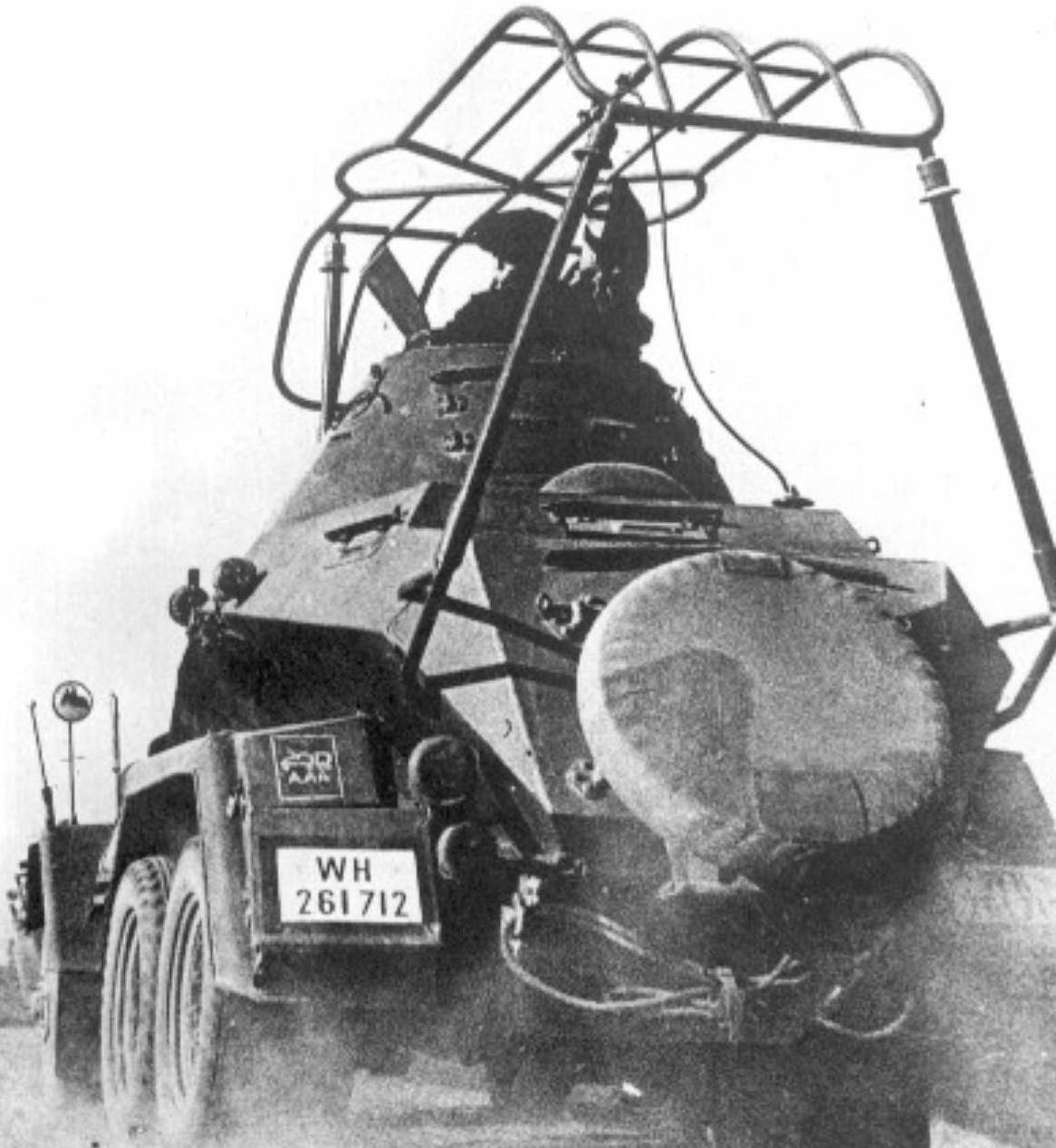 The SdKfz 232 6rad (Fu) was the radio version of the six-wheeled SdKfz 231. Note the distinctive frame-type aerial. (TM) 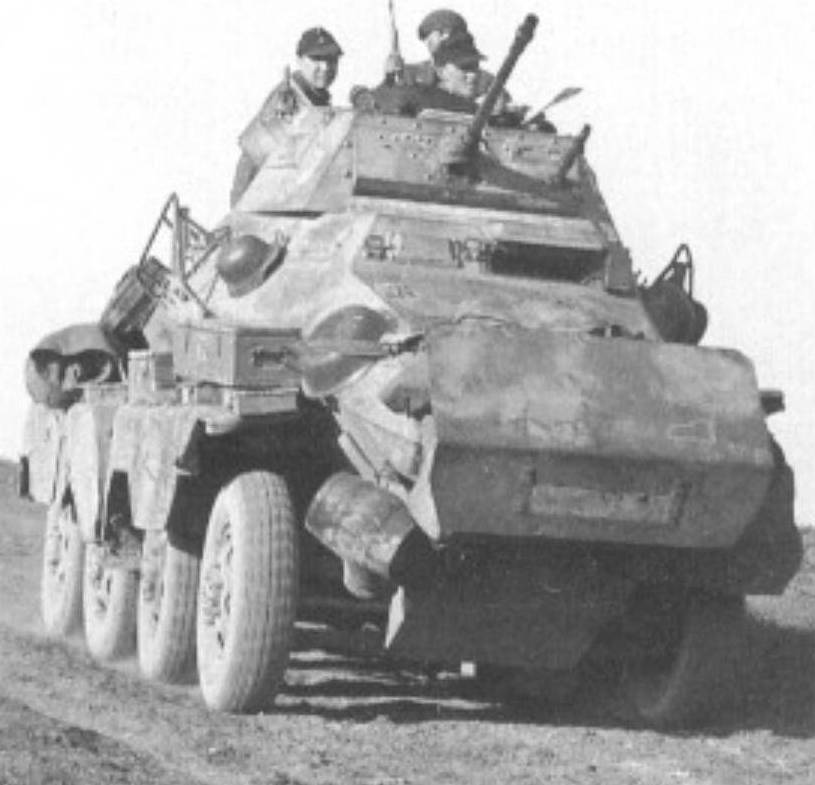 An eight-wheeled schwerer Panzerspähwagen SdKfz 231 Brad. The most powerful of all German armoured cars used in World War Two. 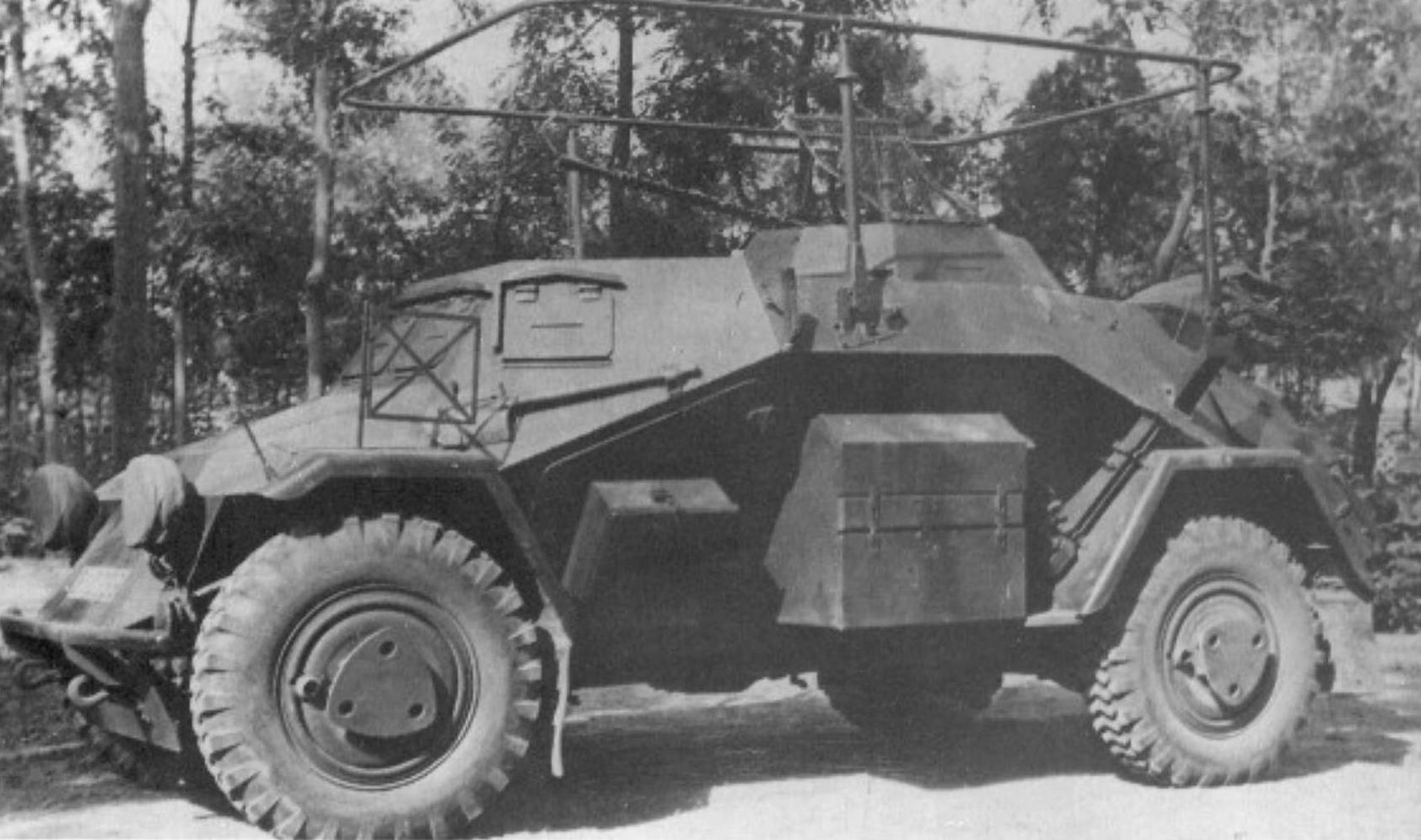 It was followed in 1936 by the SdKfz 232 (Fu) radio version which was fitted with a 100 watt long-range radio and the distinctive frame aerial which had a central bearing so that the hand-traversed turret could rotate freely below the antenna. Over 120 SdKfz 231 & 232 were built between 1932 and 1937, in addition a further twenty-eight SdKfz 263 (Fu), were built at the same time. This was identical to the other two except that the turret was fixed and it mounted just a single MG 13, the remaining space being occupied by additional radio equipment and an extra radio operator, so the total crew was now five. It was designed for use as a radio communications vehicle and not for fighting, hence its light armament. It weighed approximately 560lbs less than the other two types and was issued to motorised signals units. After operational service in the Blitzkrieg offensives against Poland and France, the 6rad series were withdrawn from operational service and used for training and internal security duties, because their cross-country performance was disappointing.

The ancestry of the powerful schwerer Panzerspähwagen SdKfz 231 and 232 (Fu) 8rad, eight-wheel drive armoured cars dates back to the Mannshaftstransportwagen I of 1928-30, when Daimler Benz, Magirus and Bussing-NAG were all asked to produce prototype eight-wheeled vehicles, to be crewed by five men, be natural amphibians and have a good cross-country performance. 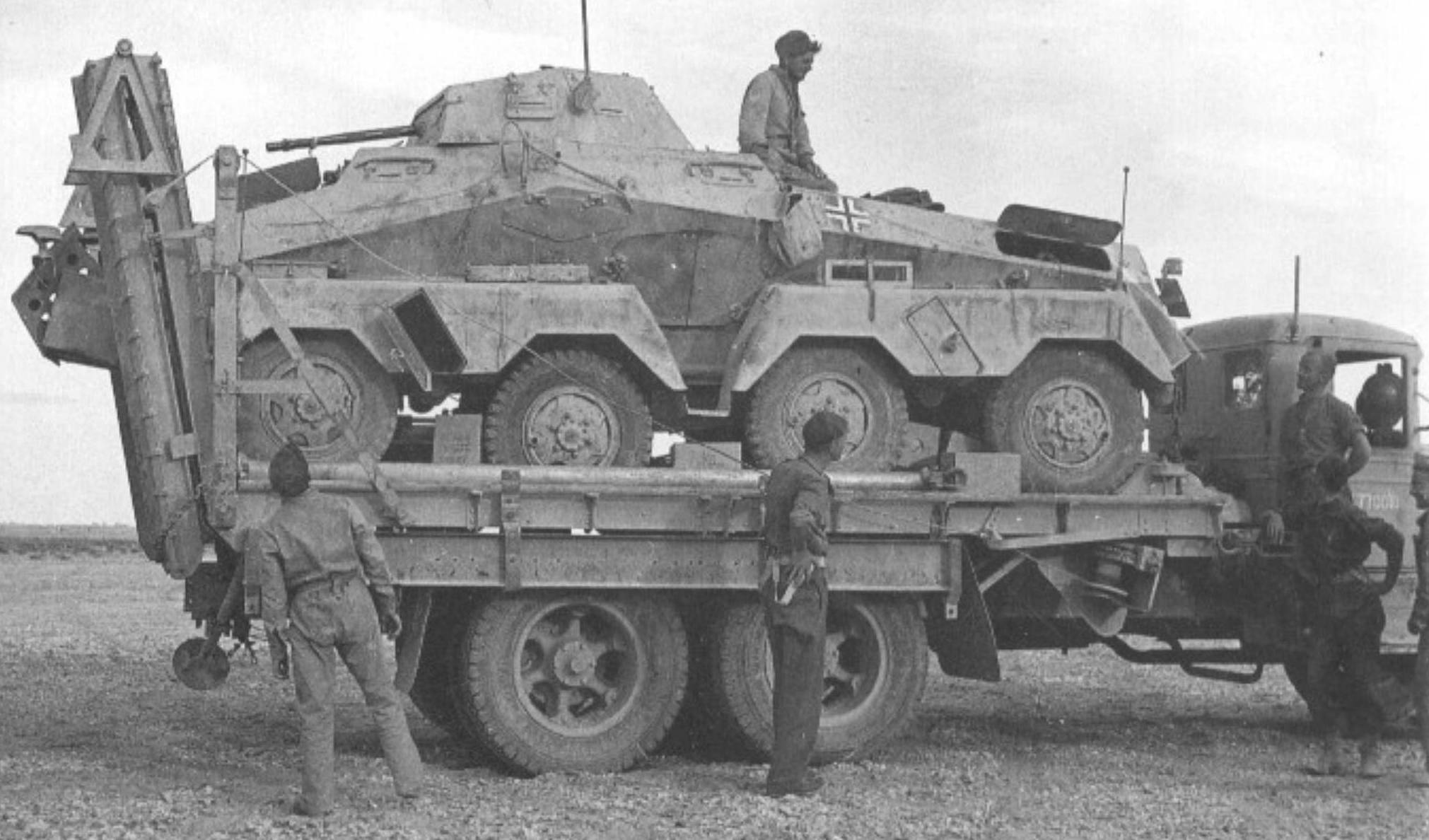 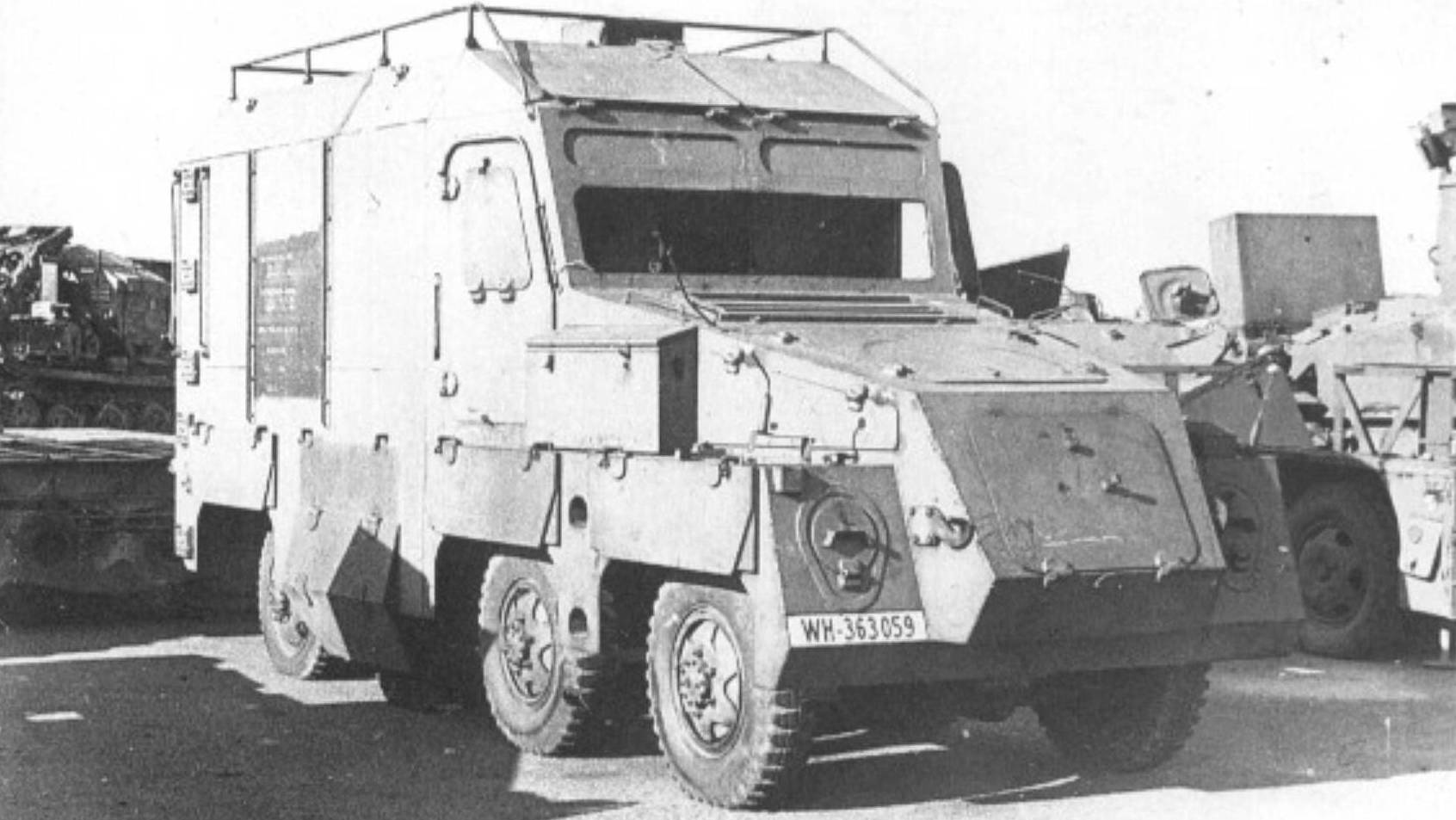 Based on the SdKfz 231 chassis the fully-armoured observation vehicle (Ballistik-Messfahrzeug) was designed to allow close monitoring of fire on artillery ranges. (TM)

The support version of the schwerer Panzerspähwagen 8rad was the SdKfz 233 which entered service in 1942. (TM) 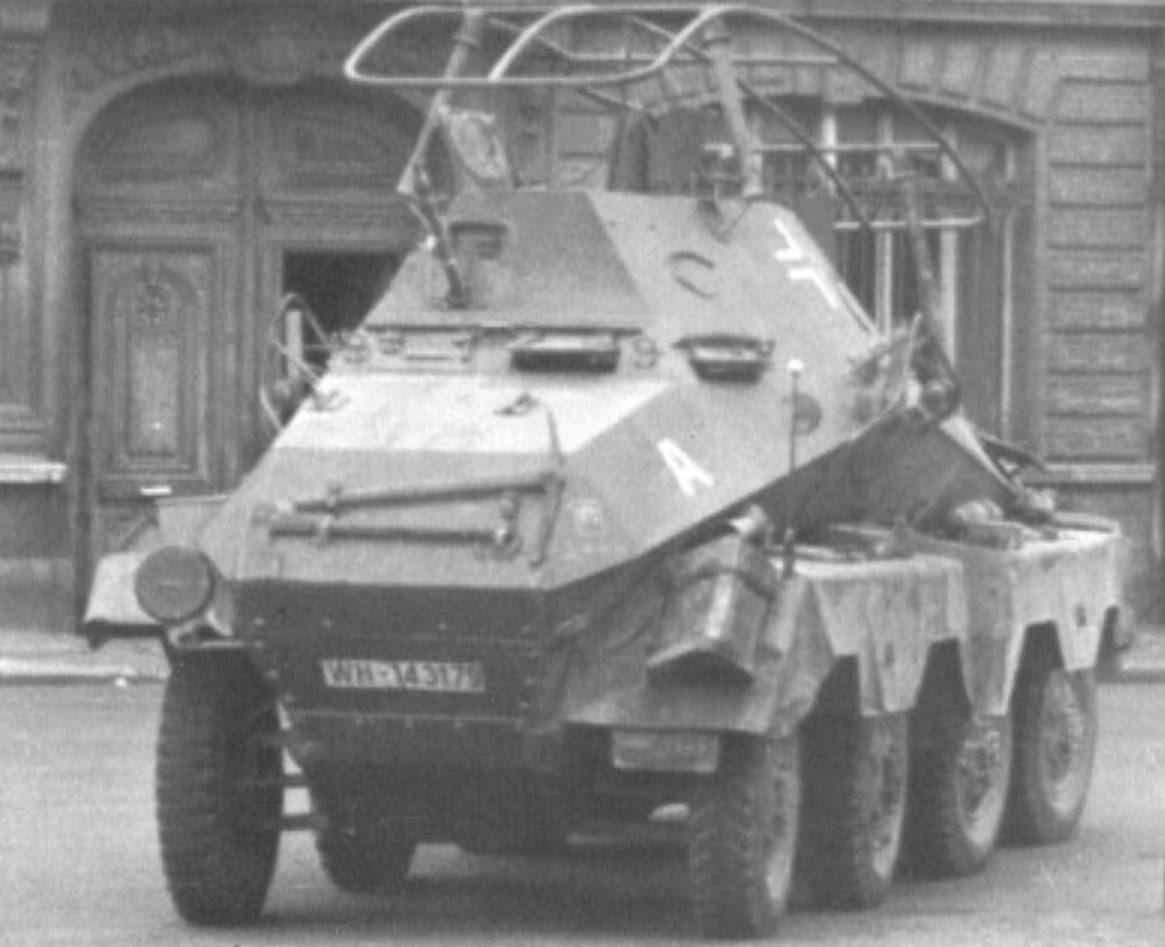 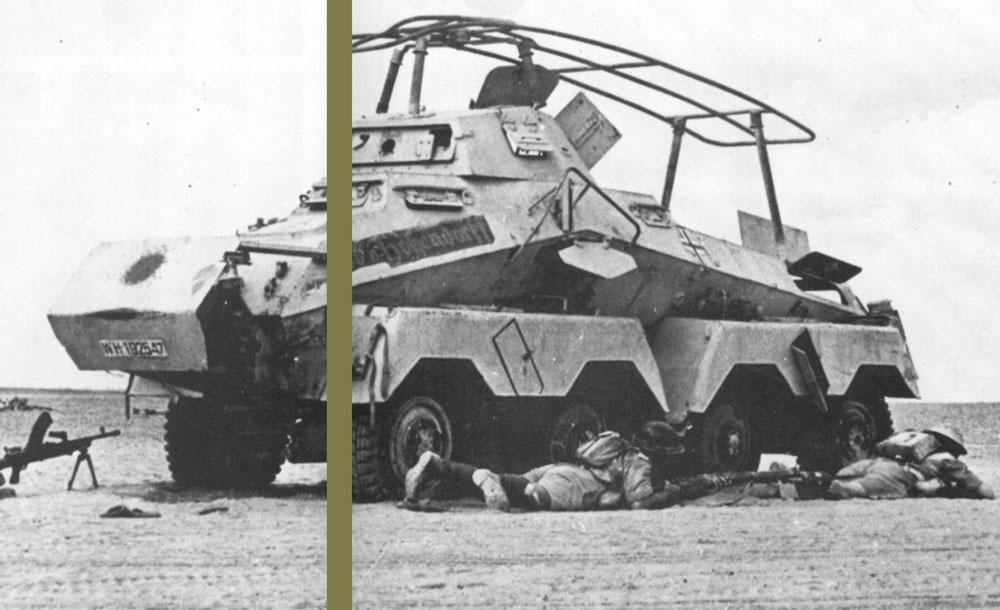 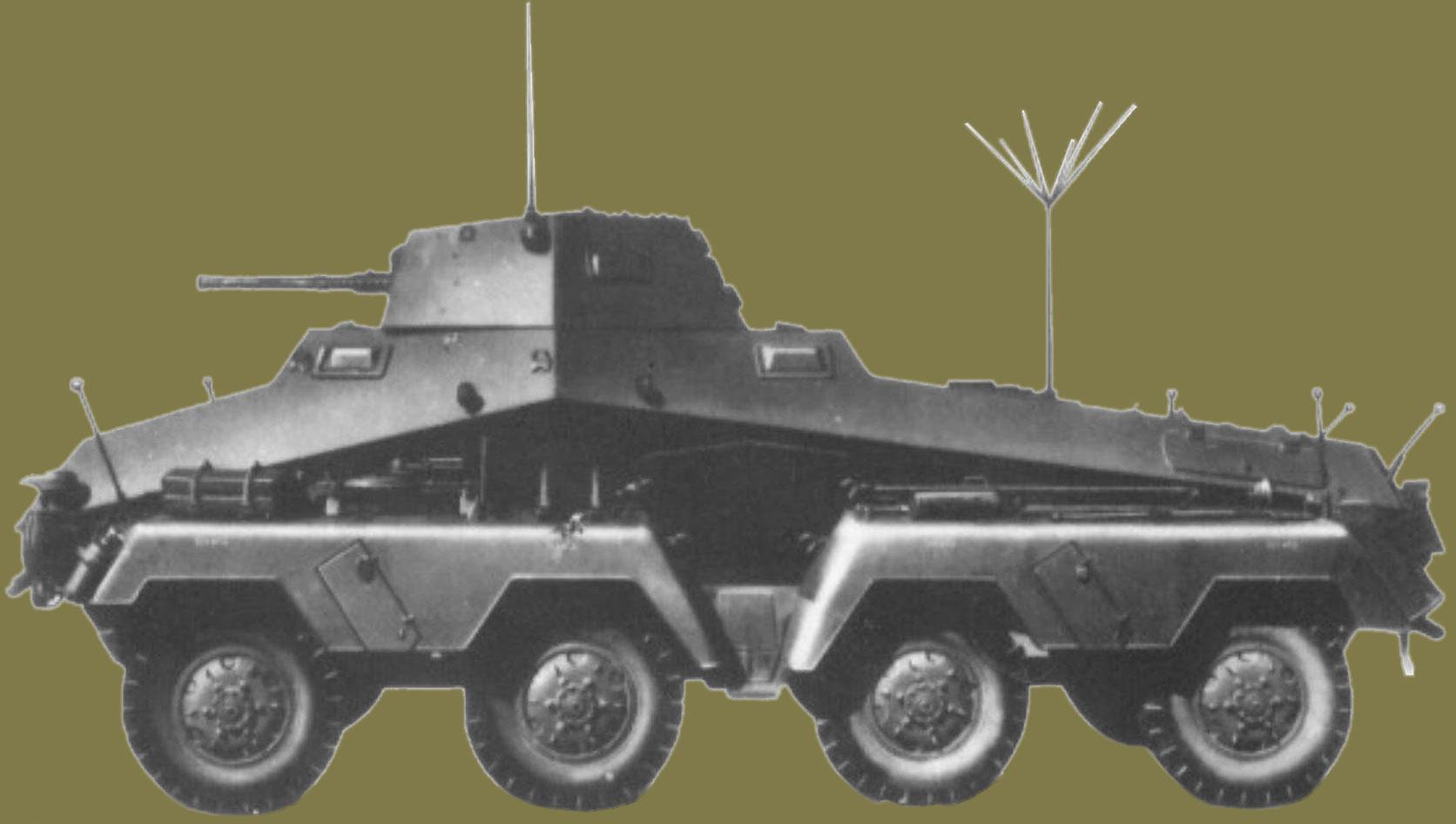 British infantry, in the Western Desert, take cover beside a knocked-out SdKfz 232 heavy armoured car which has been stripped of armament. (TM)

SdKfz 234/4 8rad, mounted a 7.5cm PaK40 gun to provide close antitank support to other armoured cars. This one is displayed in the Panzer Museum, Munster, Germany. 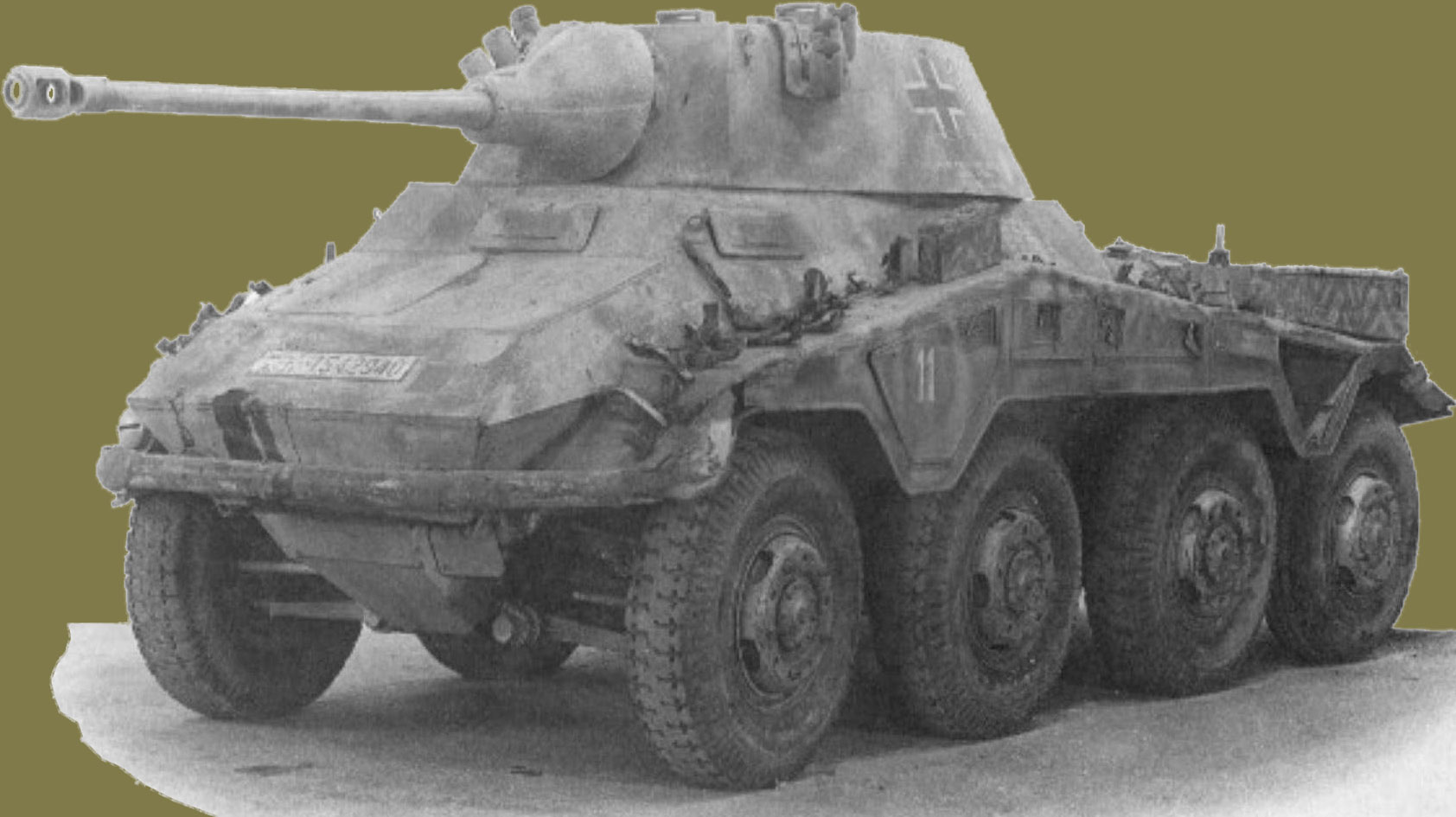 Each company built two prototypes, in fact one of Bussing-NAG's was a ten-wheel drive, larger than the others with cork-filled boxes over the wheels to assist flotation. In 1930 it was decided that the vehicle was going to be too expensive to produce, however, although the project was dropped much of the work that had been done was used in designing the SdKfz 231 8rad four years later. Production began in 1937, of this 8.3tons (7.55 tons unladen) four-man armoured ear, which was armed with a KwK30 cannon (later the KwK38) and a MG 34 mounted co-axially. The car measured 19ft 2½ins long, 7ft 3ins wide and 7ft Sins high and was powered by a V8 155hp Bussing-NAG petrol engine. Armour was 5-15mm thick. It had a top speed of 53mph and a range of 170 miles. Over 600 were built between 1936 and 1943 of this model and the almost identical SdKfz 232 (Fu) the radio version, which had the usual frame aerial and medium-range radio equipment. Later versions of the 232 were fitted with a rod aerial on the turret and a star-shaped aerial on the rear deck in place of the large frame-type.

As a support vehicle to the 231 and 232 the schwerer Panzerspähwagen SdKfz 233 8rad was a more heavily armed version, which mounted the short barrelled 7.5cm KwK 37 L/24 in place of the usual turret. This weapon had a muzzle velocity of 2450 mps, fired a range of ammunition and greatly increased the fire support capability of reconnaisance units, despite having only limited traverse. Six of these vehicles were included in each reconnaisance squadron, fully laden the three-man 233 weighed 8.58 tons, had a top speed of 53mph, a range of 187 miles and measured 19ft 6ins long, 7ft 3½ins wide and 7ft 6ins high. A total of 109 were built between 1942 and 1943.

Panzerfunkwagen SdKfz 263 (Fu) 8rad was the eight-wheel drive version of the 263 6rad with a fixed turret, no armament except for a single machine gun, allowing room for more radio equipment and an extra radio operator. Between 1938 and 1943 a total of 240 were built and were issued to signals units of Panzer and motorised divisions also to some specialised formations. Like the 6rad version it was designed as a radio car, hence its purely defensive armament. 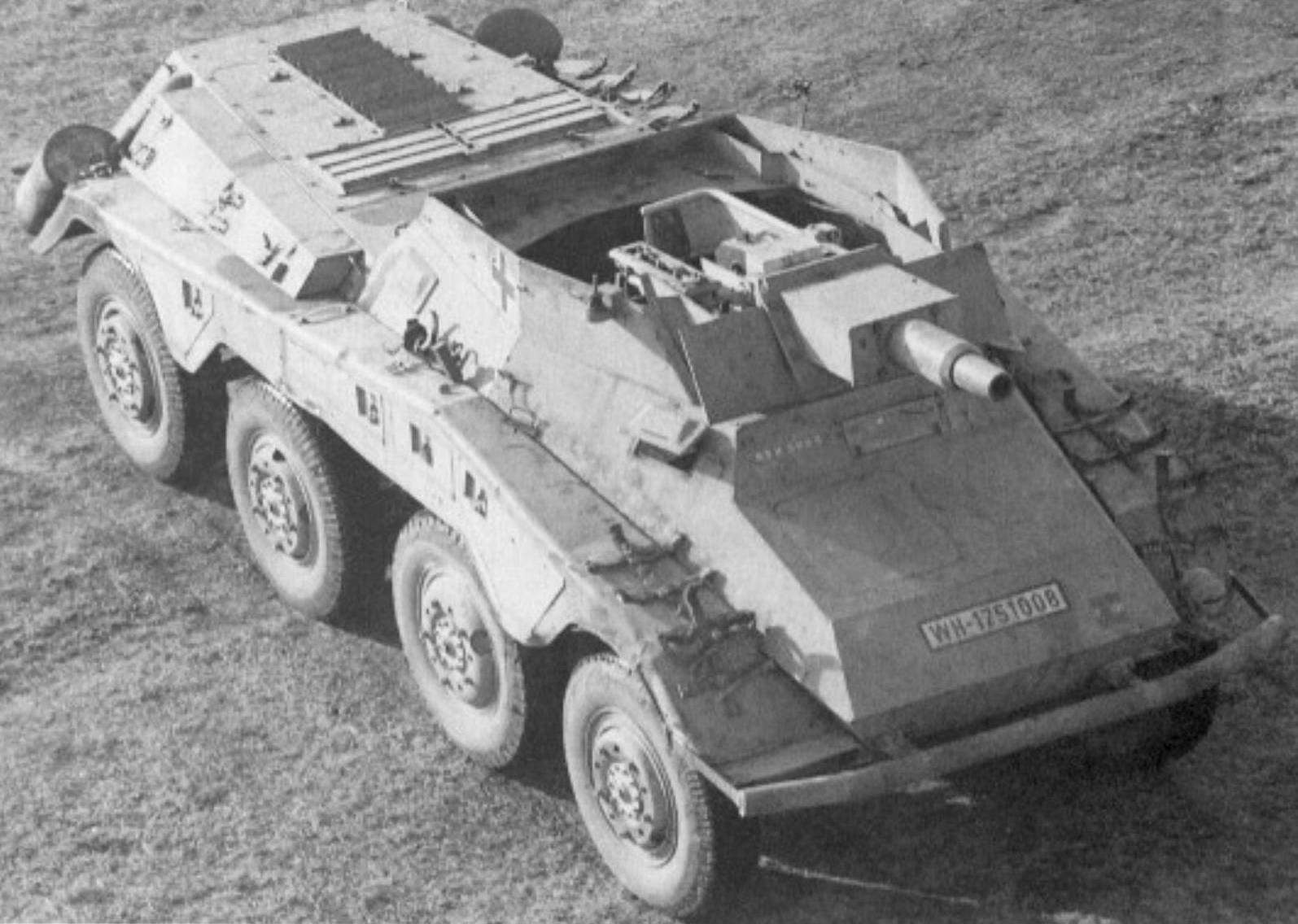 Work began in the early 1940s to produce a successor to the 231 series and the first models entered production in 1943. Although the schwerer Panzerspähwagen SdKfz 234/1 and 234/2 8rad were similar to the previous series it had one major difference being of monocoque construction, integral body and chassis unit, Thicker armour up to 30mm on the front of the hull was used, while the 220hp Tatra 102 diesel engine gave the 11.5 ton vehicle a top speed of 50mph and a range of 375 miles. Range was later increased to 625 miles by fitting a larger fuel tank. AH two hundred 234/1s, produced between 1944 and 1945 mounted a 2cm KwK 38 gun and a co-ax 7.92mm MG-42 (now the new Panzer machine gun). The vehicles dimensions were 20ft long, 8ft wide and 7ft high.

The best of the heavy eight-wheeled armoured cars built by the Germans was the SdKfz 234/2 Puma, designed to allow the Wehrmacht the ability to stand up to Soviet light and medium armour. It mounted a 5cm KwK 39/1 gun and co-ax MG 42 in a turret originally designed for the Leopard light tank. Only 101 Pumas were built (1943-44), but it saw service in four Panzer divisions both in North West Europe and on the Eastern Front, being organised into Panzerspähwagen companies of twenty-five Pumas each. It measured 22ft 7ins long, 8ft wide and 7ft 7ins high.

Taking over the role of the 233, in providing the heavy support for reconnaisance units, the schwerer Panzerspähwagen SdKfz 234/3 and 234/4 8rad was an open-topped car mounting a 7.5cm KwK 51 L/24 short-barrelled gun with limited traverse. It was followed by the 234/4 which mounted the longer, even more powerful 7.5cm PaK 40 L/46 gun, complete with gun- shield. Almost 180 of the two types were built, approximately ninety of each model. 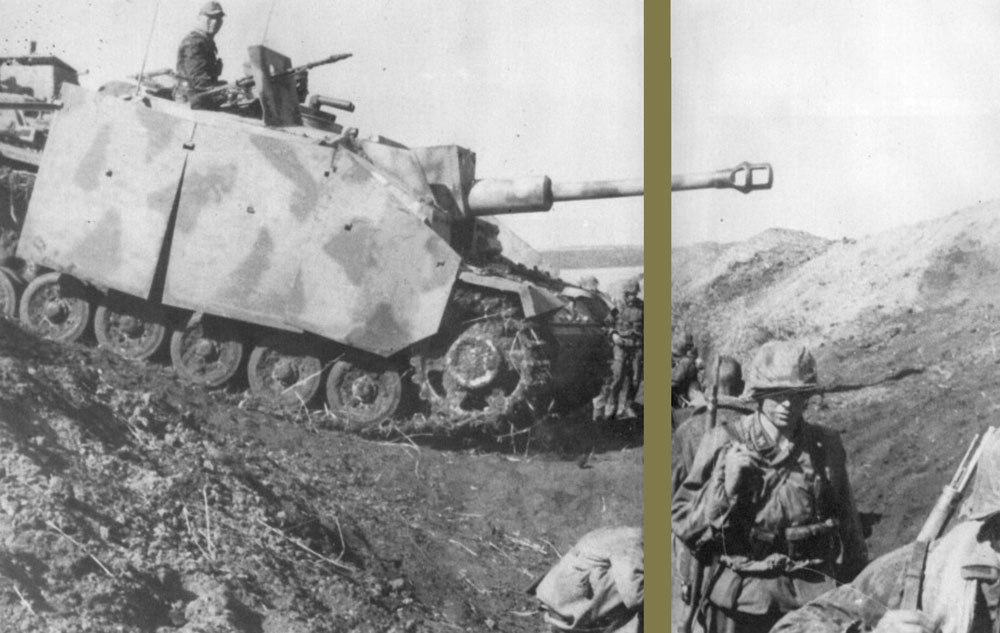 schwerer Gelandegangiger gepanzerter personenkraftwagen SdKfz 247 Ausf A & Ausf B - Approximately sixty of these wheeled APCs were built using a heavy passenger car chassis. Both could carry six men. The Ausf A was a six-wheeled, four-wheel drive vehicle, weighing 5.2 tons and the Ausf B four-wheel drive weighed 4.46 tons. They were used mainly as armoured staff cars by the commanders of reconnaisance battalions. No radio or armament was fitted. A top speed of 44mph (Ausf A) and 50mph (Ausf B) was achieved and both had a range of 250 miles Strassenpanzerwagen - The Waffen SS made up a number of improvised armoured personnel carriers/armoured cars for use in internal security roles, while the police used the Austrian-built ADGZ.

schwerer Gelandegangiger lastkraftwagen fur FJaK (Sf) - A self-propelled anti-aircraft gun which mounted the 3.7cm FlaK 36 or 5cm PlaK 41, (the latter probably only in prototype form) on a Mercedes-Benz L4500A, four-wheel drive heavy truck chassis, with armour fitted around the driver's cab. Other types of trucks were used to mount the smaller 2cm AA gun.

schwerer Minenraumfahrzeug Built by Krupp in 1944, this massive 130 ton mine clearing vehicle had wheels over nine feet in diameter, on which the heavily armoured body was carried. The wheels were set out on different track widths from front to rear, so that they covered a wider path, exploding mines by pressure. 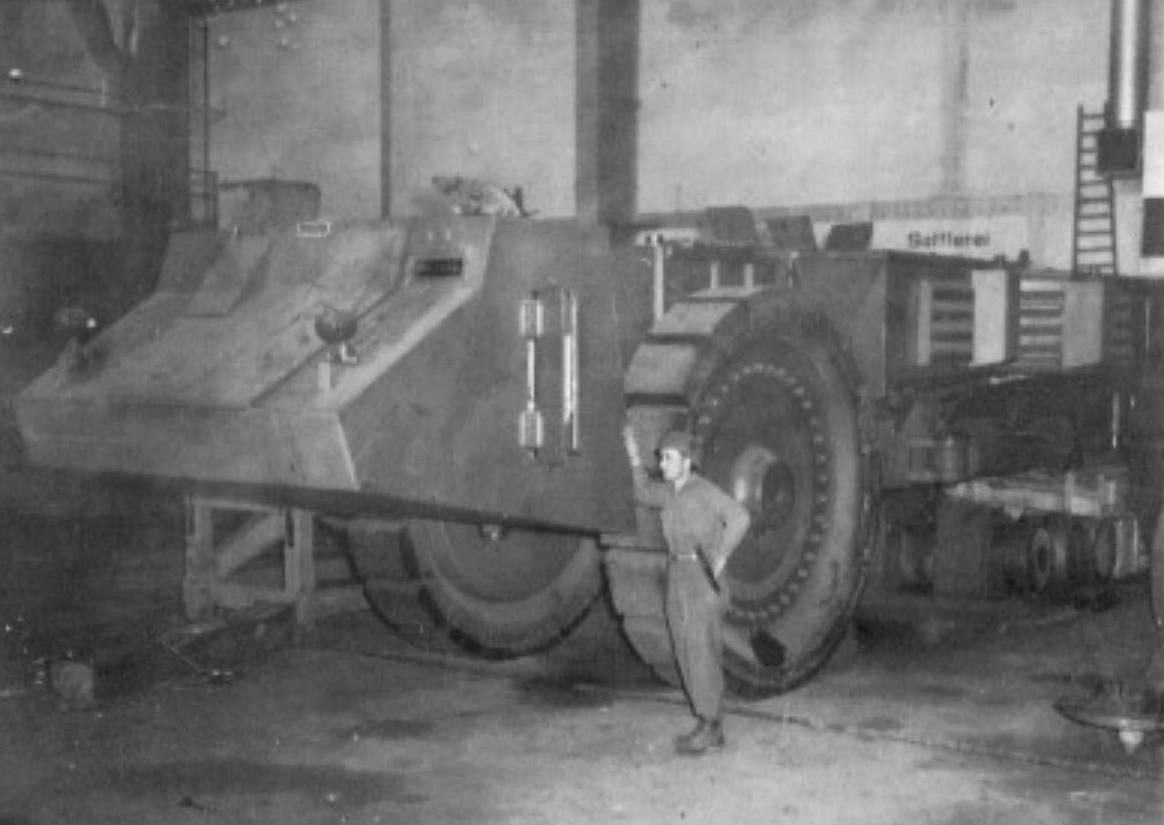 The massive 130-ton mine- clearing vehicle (schwerer Minenraumfahrzeug) was built as a prototype only by Krupp in 1944. (TM) 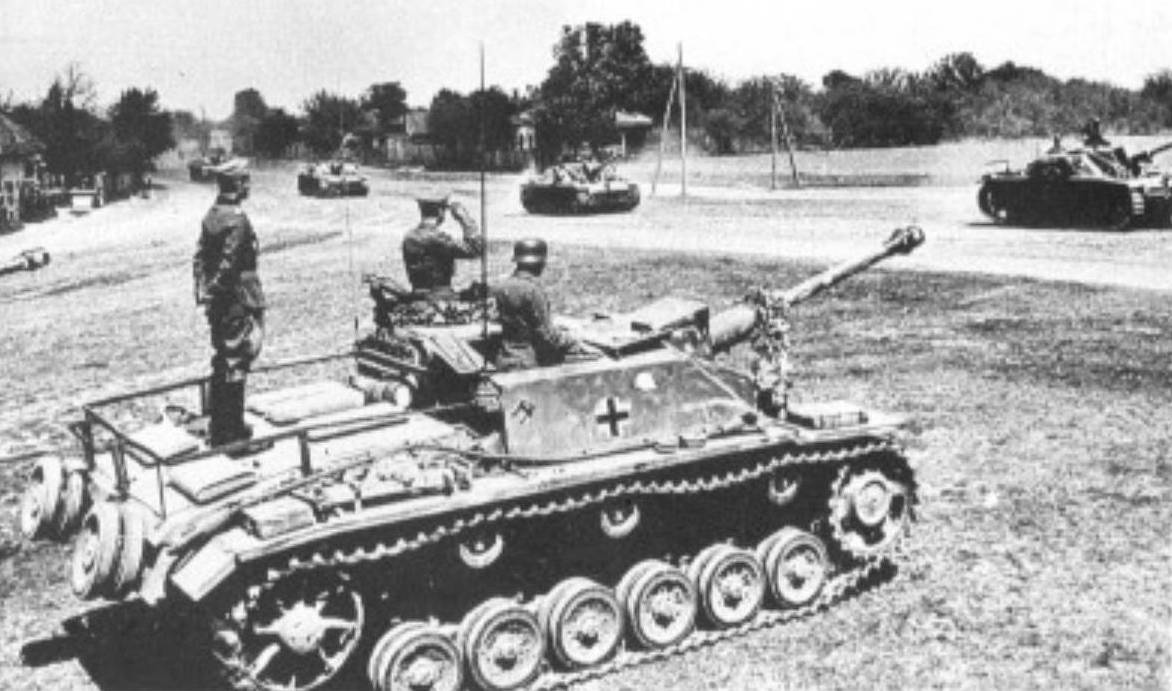 The Commander of a Stug III Ausf G company takes the salute as his troops move to the battle front. (TM)

One in every eight or nine Stug III Ausf G was fitted with the heavier 10.5cm howitzer and designated the Sturmhaubitze 42 (Stu 42). A total of 1,200 were produced. (TM) 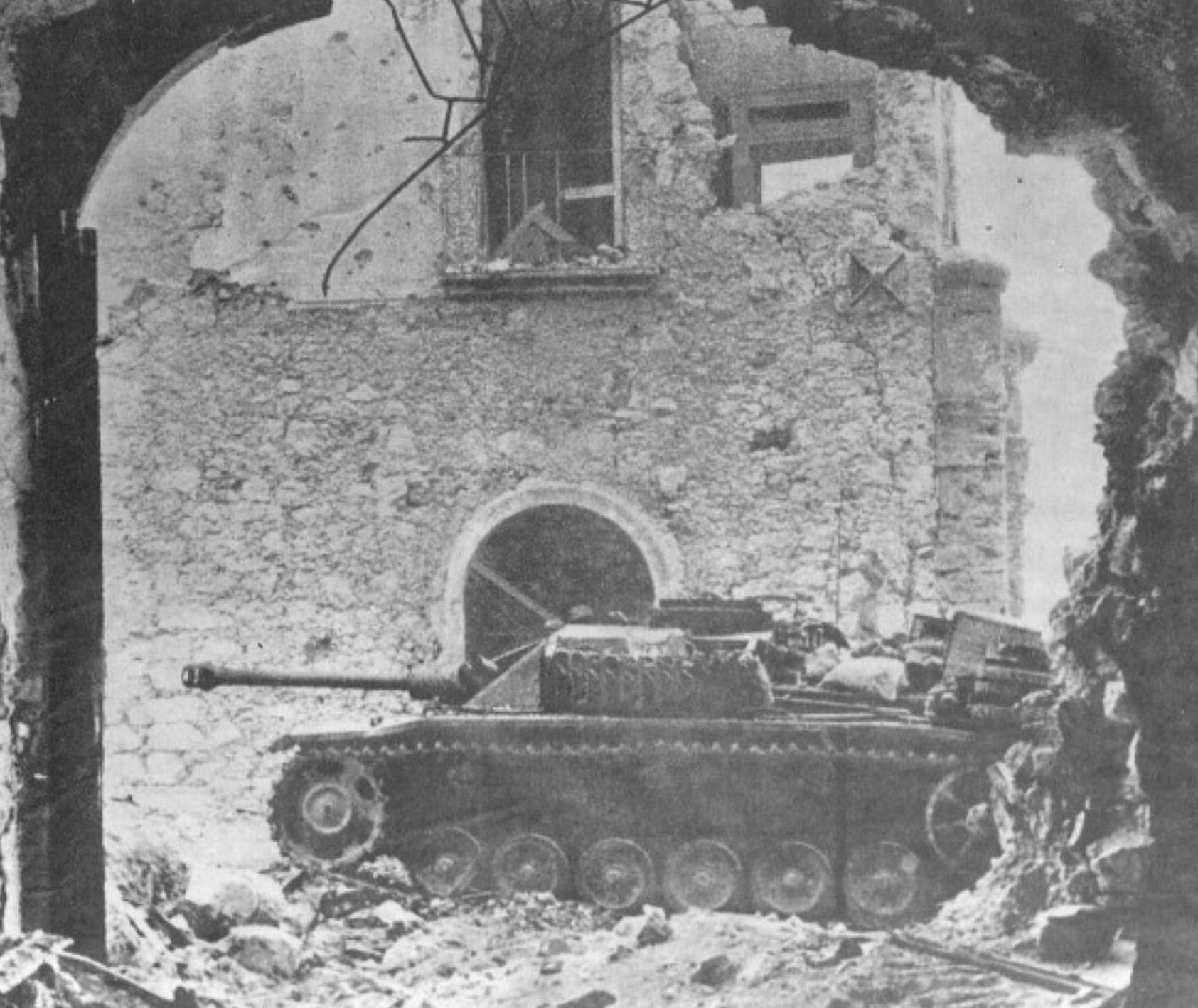 This battle photograph of a Stug III Ausf G (StuK 40) gives a good view of the PzKpfw III chassis and suspension on which the AFV was based. (TM) 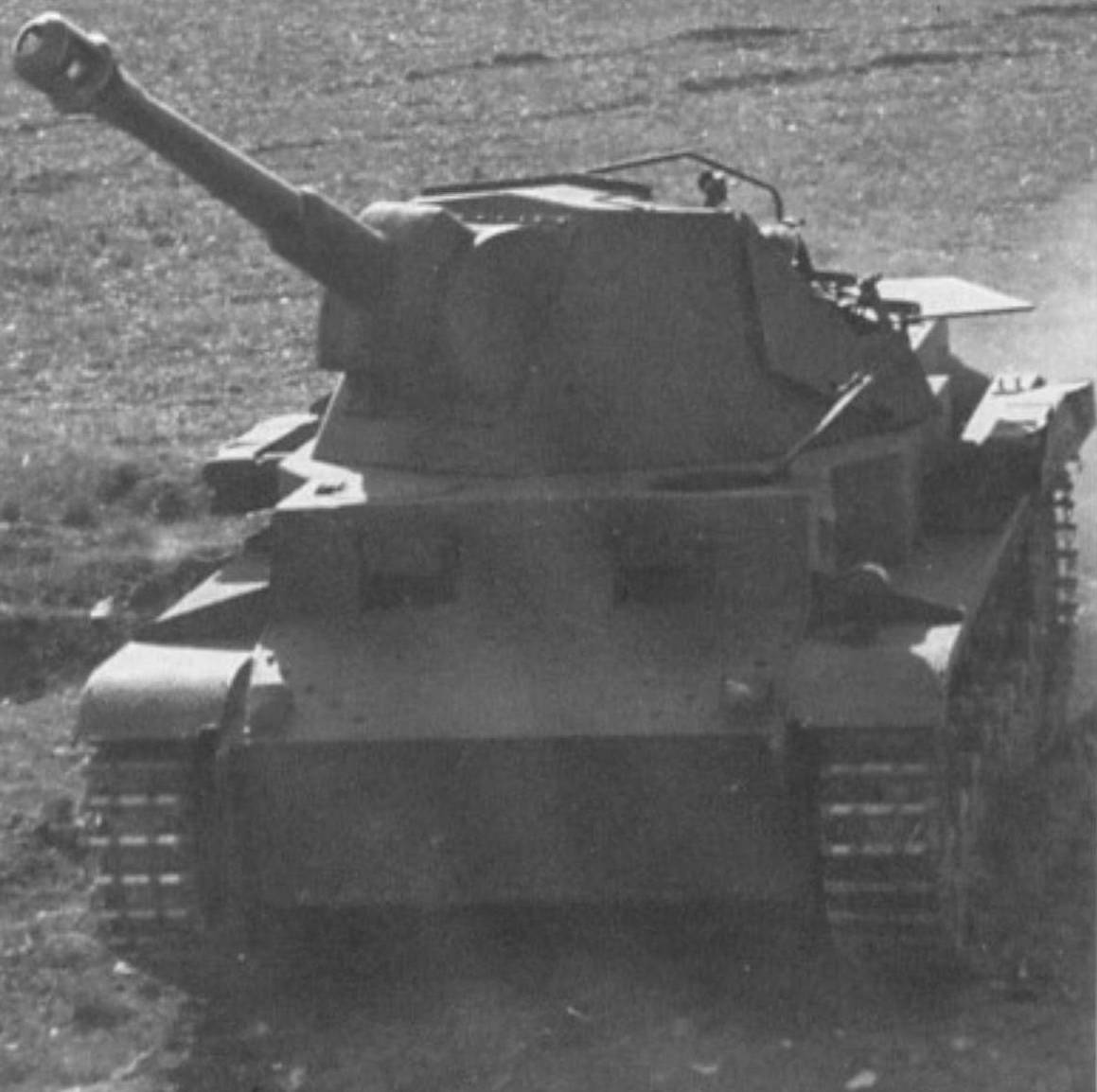 The 10.5cm leFH18/1 L/28 auf Waffenträger GW IVb, was better known as the Heuschrecke (Grasshopper) 10. Only three prototypes of this tracked light field howitzer were built in 1943. (TM)

As with their halftracks, the Germans made wide use of all their Panzer chassis to mount a variety of self-propelled guns (Selbstfahlafette (st)), including assault guns (Sturmgeschütz), infantry assault guns (Infanteriegeschütz), anti-tank guns (Panerjaeger), anti-aircraft guns (Flakpanzer), SP field howitzers or guns (Feldhaubitze and Feldkanone), assault howitzers (Sturmhaubitze), assault mortars (Sturmmörser) and tank destroyers (Jagdpanzer). They also did the same with a wide range of captured enemy equipment. This followed a deliberate policy which had begun in the mid-1930s and was not just some haphazard way of finding new uses for obsolescent tank chassis. Perhaps the most important of these were the Sturmgeschütz, with their dual capability as assault guns and the anti-tank role. The Pancerjaeger (tank hunter) was used offensively and rose to prominence especially in 1942, as a result of meeting masses of Soviet tanks when the Germans began their invasion of Russia.

Some 200 PzKpw I Ausf Bs were modified in 1940-41 by removing the turret and mounting a 4.7cm PaK(t) L/43.4 anti-tank gun, the (t) - tchechoslowakisch - denotes that the gun was of Czechoslovak origin. This was the first of many such conversions and prolonged the service life of the obsolescent PzKpfw I chassis. It saw service in France and the Low Countries in May 1940 and went on being used until late 1943. The gun had limited traverse (twenty five degrees) and elevation (minus eight degrees to plus twelve degrees), with a three-sided open-topped gunshield, to give a small amount of protection to the three-man crew. Weighing 6.4 tons, it had the same dimensions as the PzKpfw I Ausf B, except that it was 10ins higher. It was designated as the 4.7cm PaK(t) (sf) auf PzKpfw I Ausf B.

During early 1940, approximately thirty 15cm siG33 (Sf) auf PzKpfw I Aust if B heavy infantry guns were produced by removing the turret and fitting the 15cm siG33 L/11 heavy infantry gun in a large box-shaped gunshield some 10mm thick, which added 2ft 8½ins to the normal height of the PzKpfw I Ausf B. The vehicle's weight nearly doubled to 8.5 tons and carried a four-man crew. The gun was on its normal artillery carriage and the shield was open at the cop and rear. Maximum elevation was seventy-five degrees and traverse twenty- five degrees. Only twenty-five rounds of ammunition were carried. As with the 4.7cm they were used in the Blitzkrieg of May, 1940 and continued in service on the Eastern Front. The 15cm gun had a maximum range of 4,700 metres.