Some carriers were left behind in France after Dunkirk, in May 1940, whilst others were captured in North Africa. These were taken into service by both the Germans and the Italians, the letter e in brackets was used after the German designation to signify English. 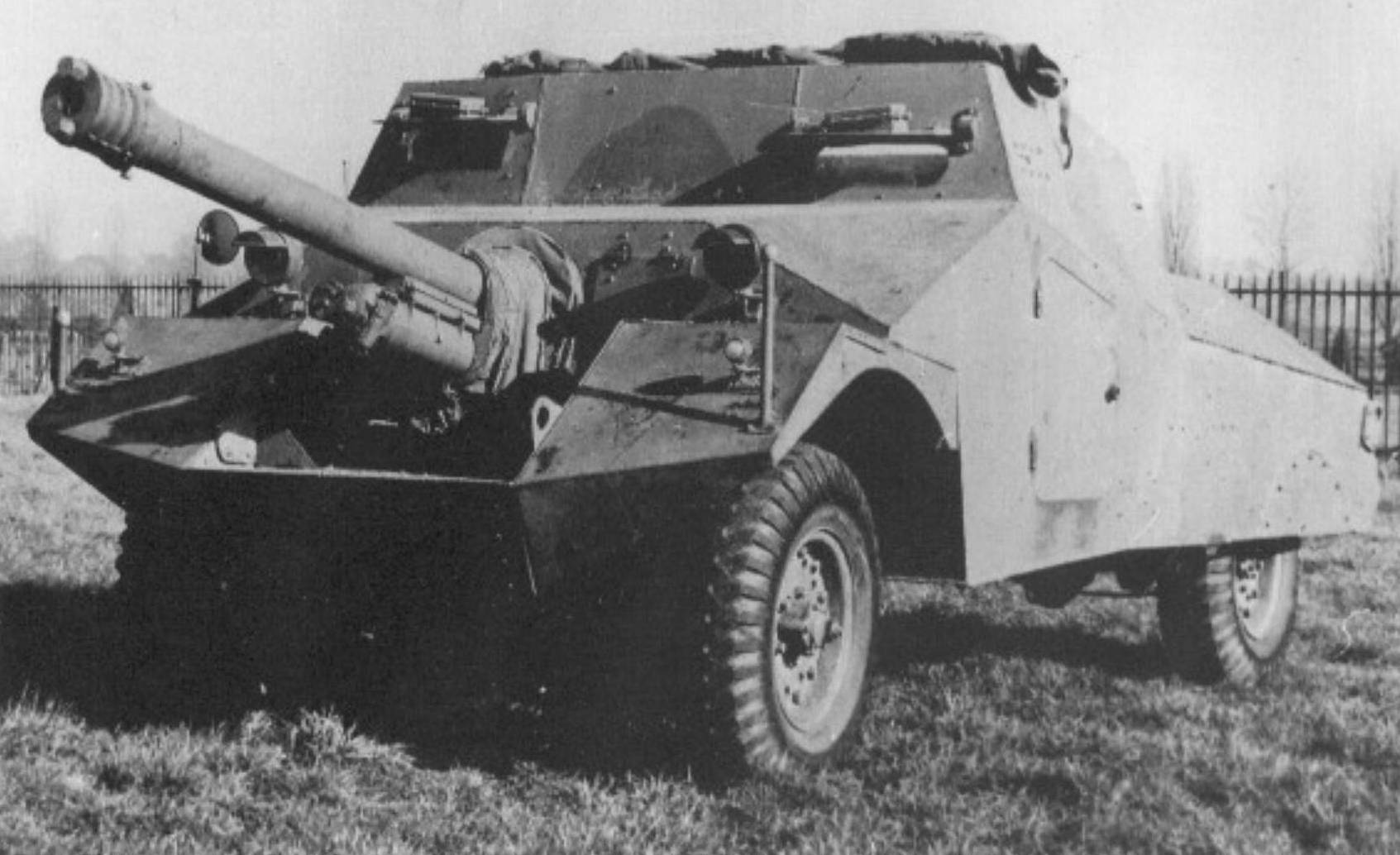 This Morris light reconnaissance car has been turned into a formidable vehicle, by mounting a 6 pounder gun, but there is no evidence that it was ever used in battle. (TM) 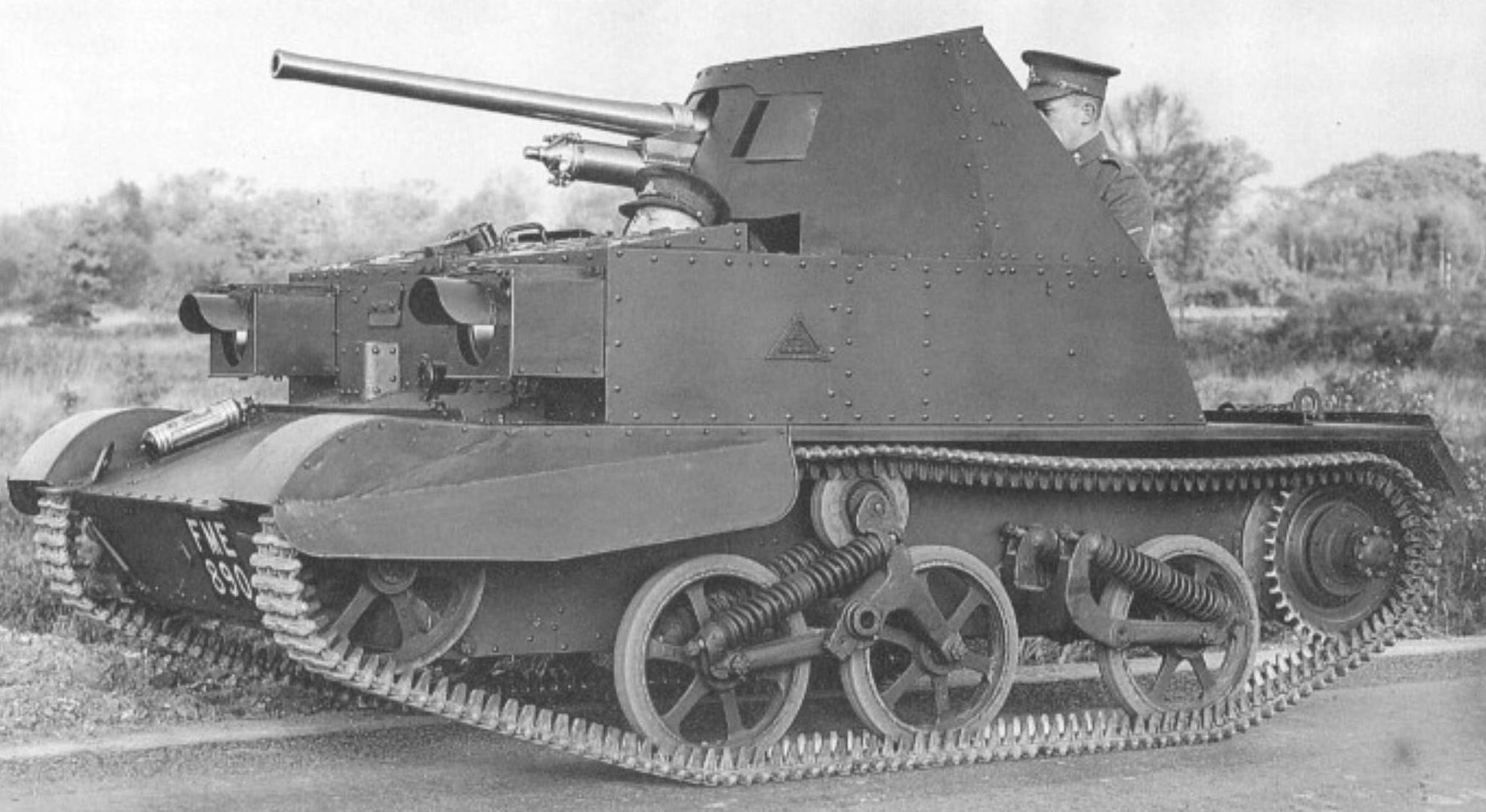 Developed in 1938, the Carrier Machine Gun No 2 Mk I was tested as a 2 pounder antitank gun carrier, complete with ammunition and a crew of four. Total weight was nearly 4 tons. (TM) 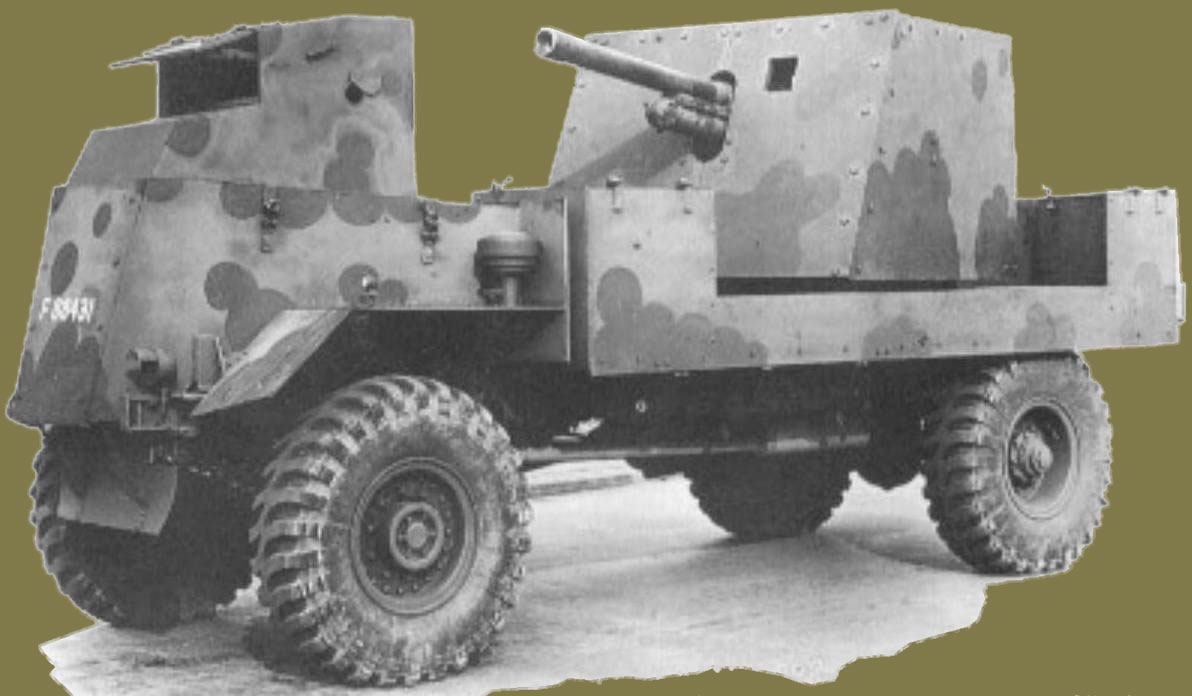 Designed as a basic SP gun carrier, the AEC Deacon of 1942, mounted a 6 pounder gun in a flat-sided turret on the back of an AEC Matador 4×4 truck chassis. They saw active service at the end of the North African campaign and were then handed over to the Turkish Army. (TM) 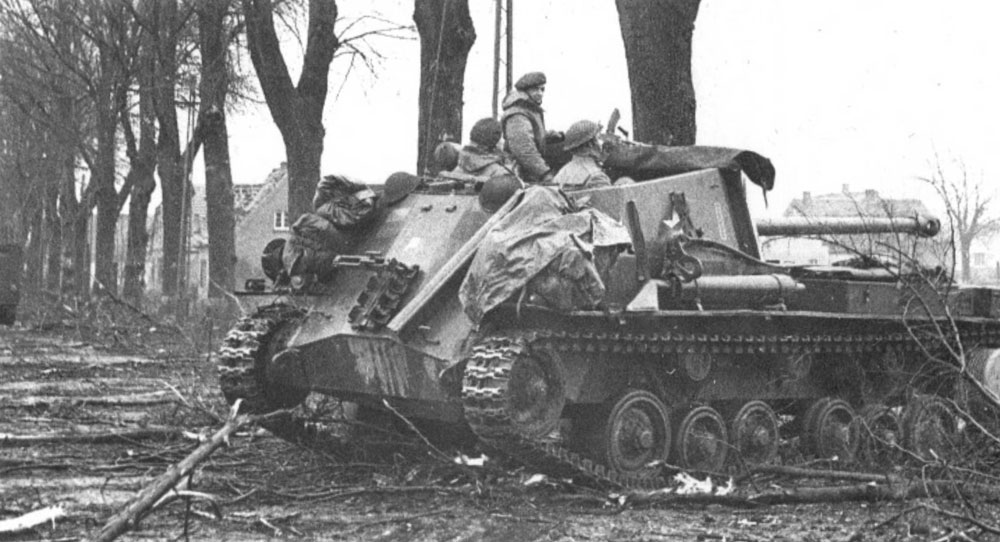 The highly effective Valentine Archer SP gun, mounted a 17 pounder gun, and was one of the best anti-tank guns of World War Two. Here one guards a road near Nutterden, south east of Nijmegen, Holland during the Rhine offensive, in early 1945. (TM)

The Italians merely fitted their own weapons, although there was an Italian carrier which closely resembled the Universal Carrier and was probably a direct copy. Finally, a few carriers were captured by the Japanese in 1941-42, some of which were converted into rudimentary light tanks, by adding plating and a small turret containing a machine gun.

It could well be said that, like the Royal Artillery, the tracked armoured carrier was to be found everywhere in World War Two. In total 50,000 carriers of all types were built by the British alone during the war years and many more were built in Commonwealth countries.

In my book World War Two Tanks in this series, I mentioned such AFVs as the 17 pounder Archer, but did not describe it, nor the other self-propelled gun. Bishop, or to give it its full title: the Carrier, Valentine, 25 pounder gun Mk I, based on the Valentine chassis. In the same manner, whilst covering the A30 cruiser-based Challenger Tank Destroyer. I did not deal with the follow-on Avenger. This latter TD did not enter service until 1946, so although designed during World War Two, it deserves only a mention here as it saw no active service. The main reason was that the American M10 and British M10 Achilles, mounting a 17 pounder instead of the American 3-inch gun, were already in reasonably plentiful supply. Bishop on the other hand, was a self-propelled artillery weapon, with the primary function of providing artillery support rather than direct anti tank fire. It came into being as a result of early German success in North Africa when the Afrika Korps deployed, to great effect, various infantry support weapons mounted on a range of tank chassis.

This led to an urgent plea from the Eighth Army for the British to do the same. In June 1941, a scheme to mount a 25 pounder on an existing tank chassis was proposed, the Valentine was quickly chosen and, only two months later, a pilot model was produced for trials. It consisted of a Valentine tank without its turret, with a box-like, rigid armoured structure in its place, containing a 25 pounder field gun. Trials were successful, although the crew was very cramped and the gun could not achieve maximum elevation because of the confines of the box, thus restricting its range to 5,850metres (the maximum range of the 25 pounder Mk I was normally 10,900metres), After crew protection had been improved (armour thickness was eventually 8-60min) it was rushed into service, an order for 100 being placed in November 1941, with a further 200 provisionally promised as a follow-up order.

Four months later, it became apparent to the British lank Mission visiting the United States, led by Michael Dewar, that the Americans could produce a much better SP, namely the M7 Howitzer Motor Carriage (known as the Priest in British service), so further orders of Bishop were cancelled. By July 1942, some eighty of the first order had been delivered and the first batch had arrived in the Western Desert. At that time a further order for fifty was placed. Priests then began to arrive in large numbers and eclipsed Bishop entirely. Nevertheless, Bishop continued to be used both in North Africa and Sicily, also in the opening phases of the Italian campaign. After being replaced by Priest, the Bishop continued to be used for training.

The success of the British 17 pounder which entered service in August 1942 despite the fact that it had to be mounted on a 25 pounder gun carriage, made it the best British anti-tank weapon (it could penetrate 130mm of armour at 915 metres). It was successfully fitted to the Sherman Firefly, M10 Achilles and Challenger A30. 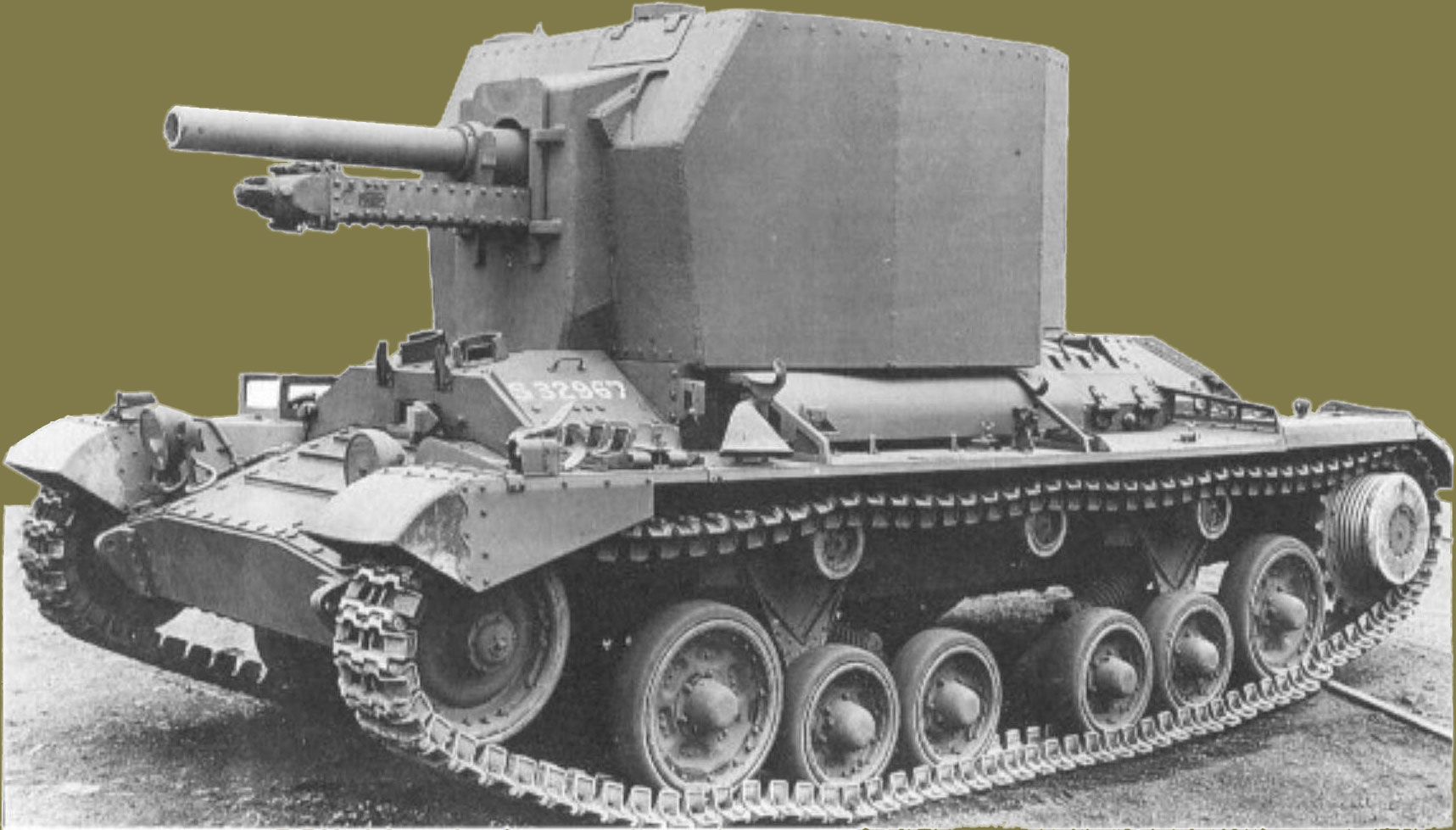 Bishop mounted a 25 pounder gun on a Valentine chassis, inside a box-like rigid armour structure, which did not allow full elevation of the gun. It was later replaced in service by Priest and was then only used for training purposes. (TM) 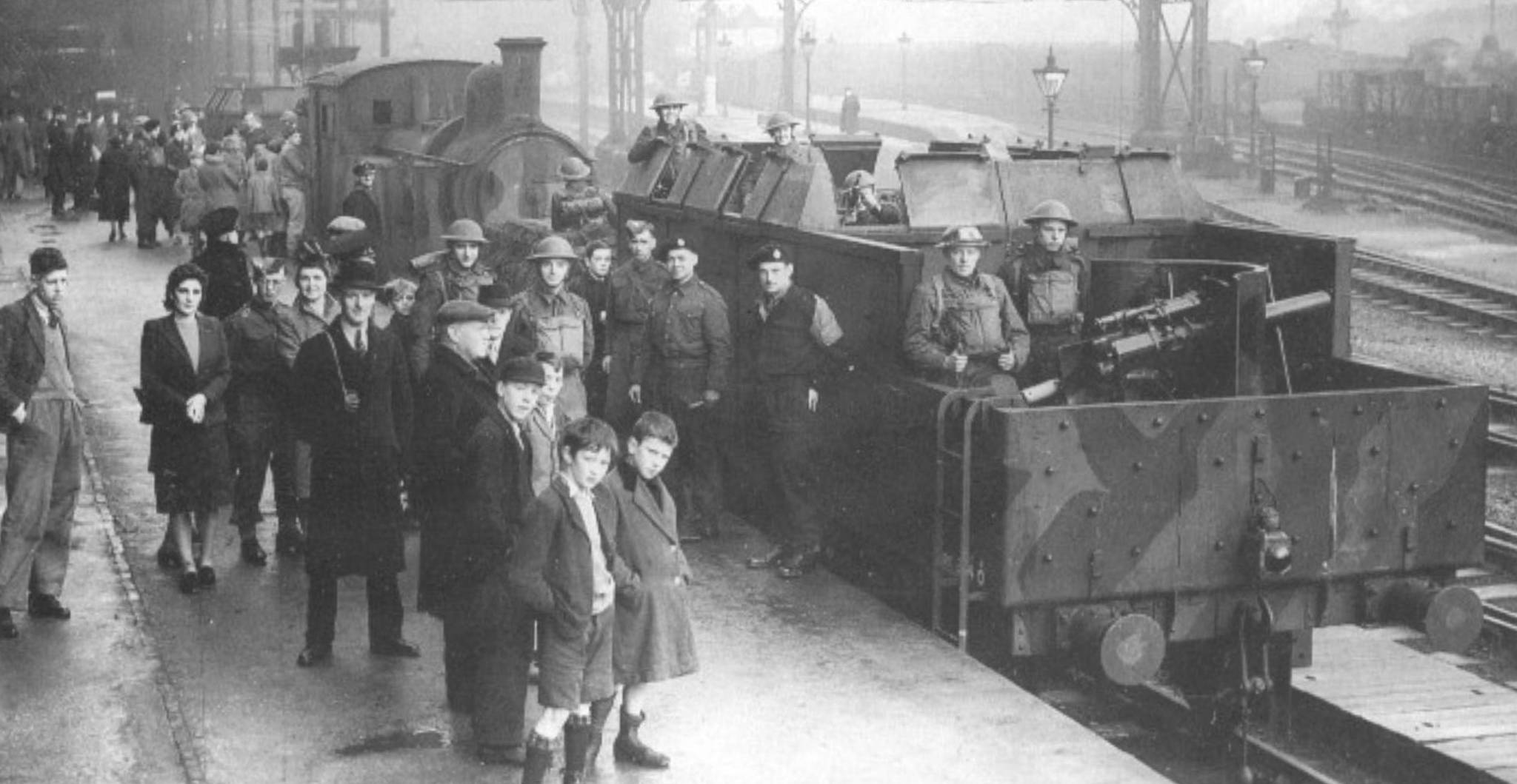 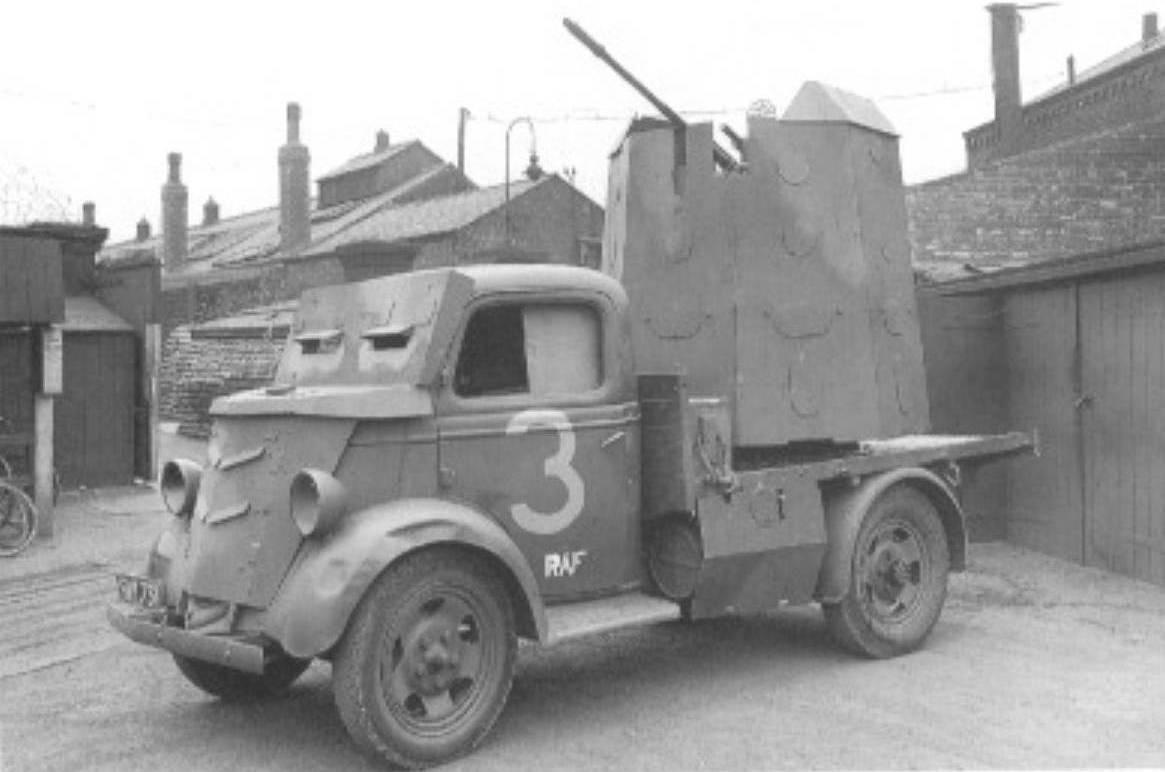 This armour protected AA gun is on the back of a V8 Fordson ½ ton truck. The gun is a 20mm Hispano-Suiza.

However, initially, investigations were undertaken to see if it would fit onto an existing British tank that was available in some quantity. Crusader was too small and underpowered, but the Valentine was suitable and its chassis was already being used for the Bishop. Initially the proposal was to use an existing turret, so as to achieve 360 degrees traverse, but neither Valentine nor any other tank for that matter at that time had a turret-ring diameter large enough to accept the 17 pounder. Using the Bishop box-like turret was also ruled out as it was too tall and unwieldy. Vickers had to design an entirely new superstructure and decided on a rearward facing mounting in a low. open-topped turret. with limited traverse (eleven degrees right and eleven degrees left) and elevation (from plus fifteen degrees to minus seven degrees). Vickers built a total of 665 Archers on Tyneside and they were used by anti-tank regiments in North West Europe and Italy. Archer carried on in British service postwar as the standard equipment of the Divisional Anti-Tank Regiment, Royal Armoured Corps.

Britain's armoured trains were nowhere near as large or complicated as those of the Soviet Union. However, they still performed a useful service, making a positive contribution to Britain's defence in the dark days of 1940 and for as long as the threat of invasion remained in the years that followed. Even such oddities as Hereules, an armoured train which operated on the Romney, Hythe & Dymchurch Railway (a passenger carrying miniature railway) in 1940, which was only 4ft 6ins high - the thought of it speeding down the track, guns blazing is enough to make Toytown tremble! However, on at least one occasion it was claimed that a member of the train's troop detachment shot down a German Me 109 tighter bomber with a Lewis gun, so it was clearly a force to be reckoned with. The more usual armoured train, which was crewed by members of the Home Guard, usually consisted of an armoured goods truck, mounting a 6 pounder gun (removed from old heavy tanks of World War One), with an extended gun shield and steel plates hinged onto the truck sides to give all round protection, while in the rear portion of the truck was a Vickers machine gun. twin Bren guns on an AA mounting and a number of riflemen. All the armoured trains had been taken out of service by November 1944. 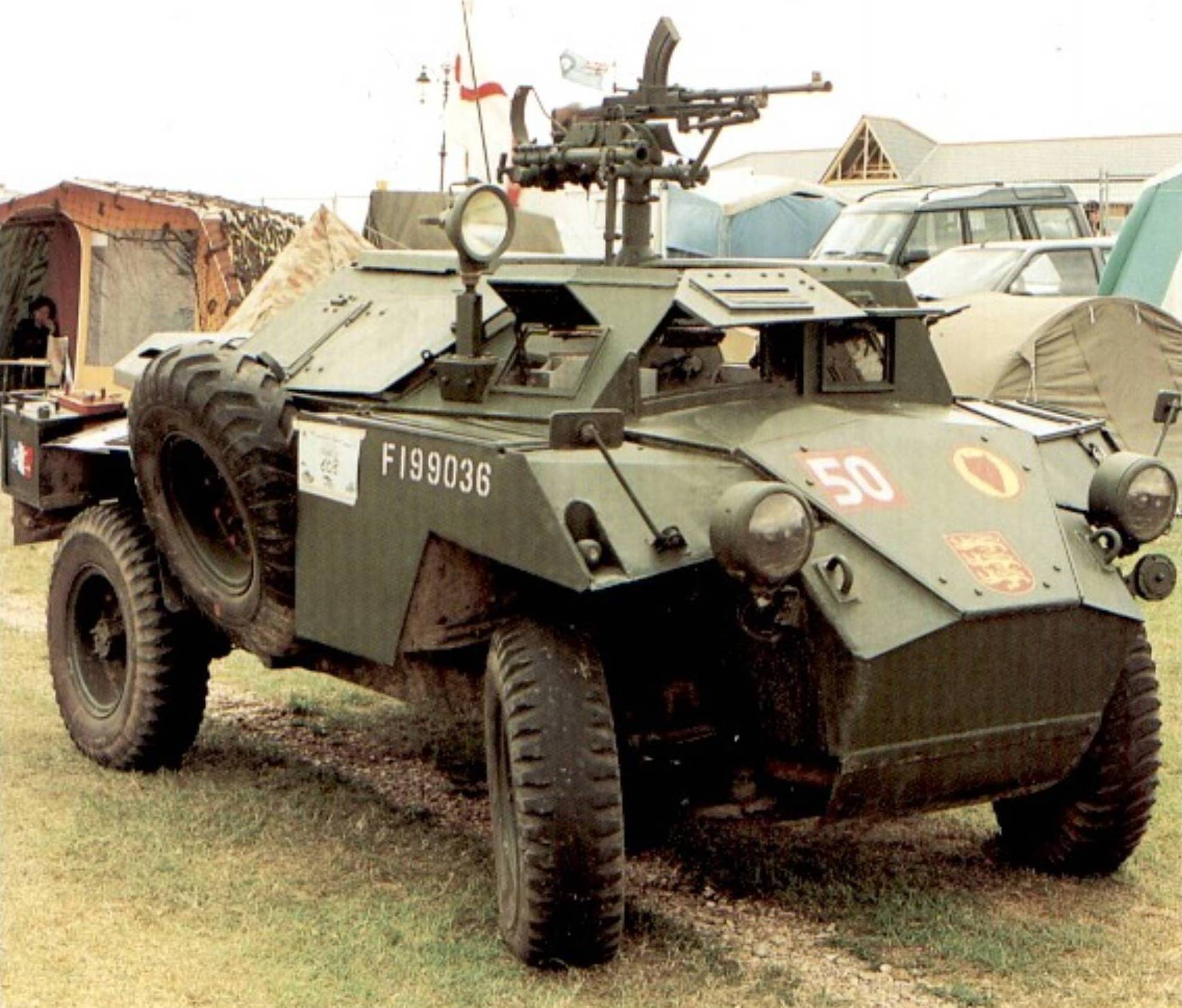 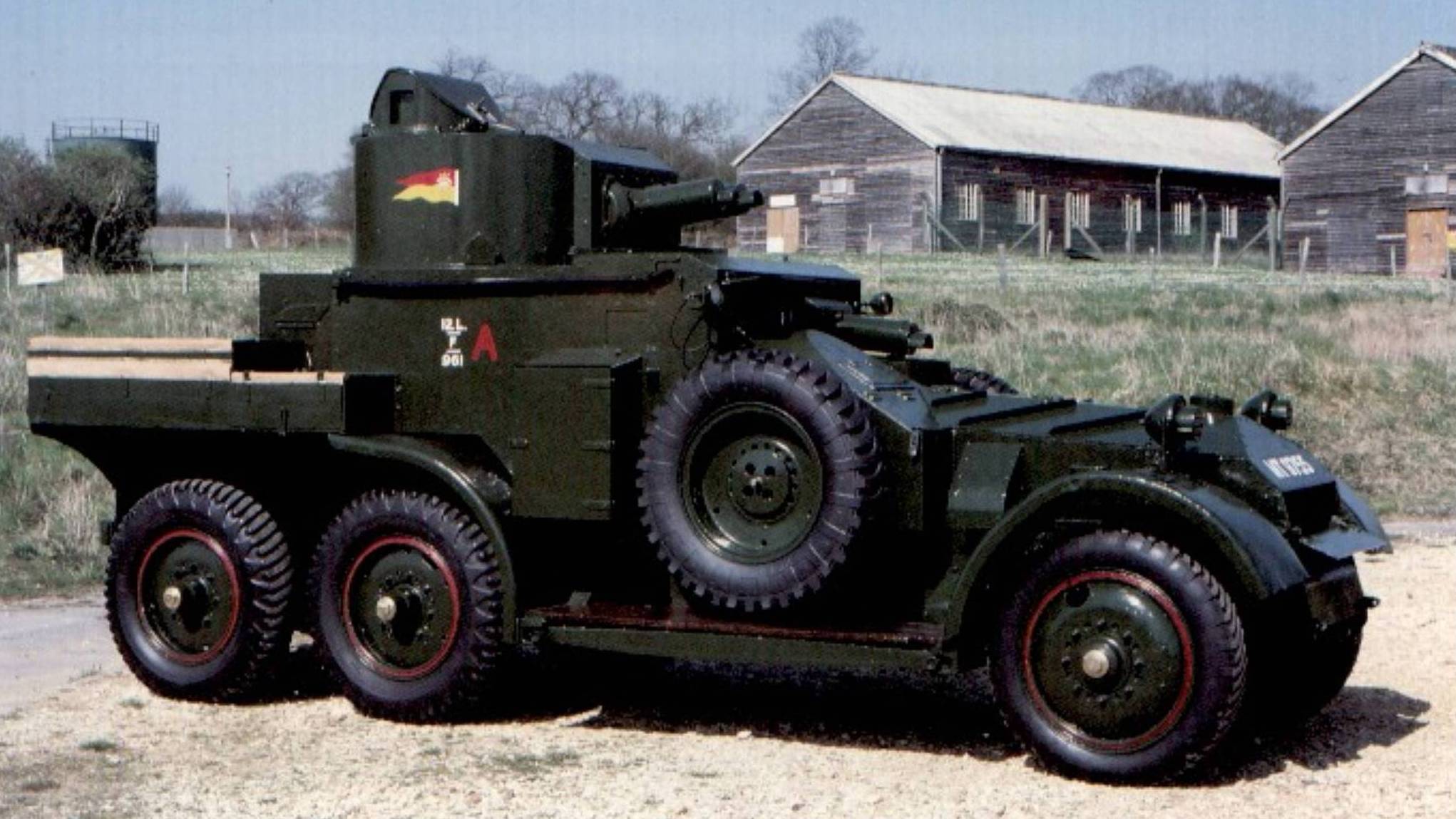 This immaculate Lanchester 6×6 armoured car is on permanent display at the Tank Museum, Bovington. Lanchesters were still in use in Malaya at the beginning of World War Two. (TM/Roland Groom) 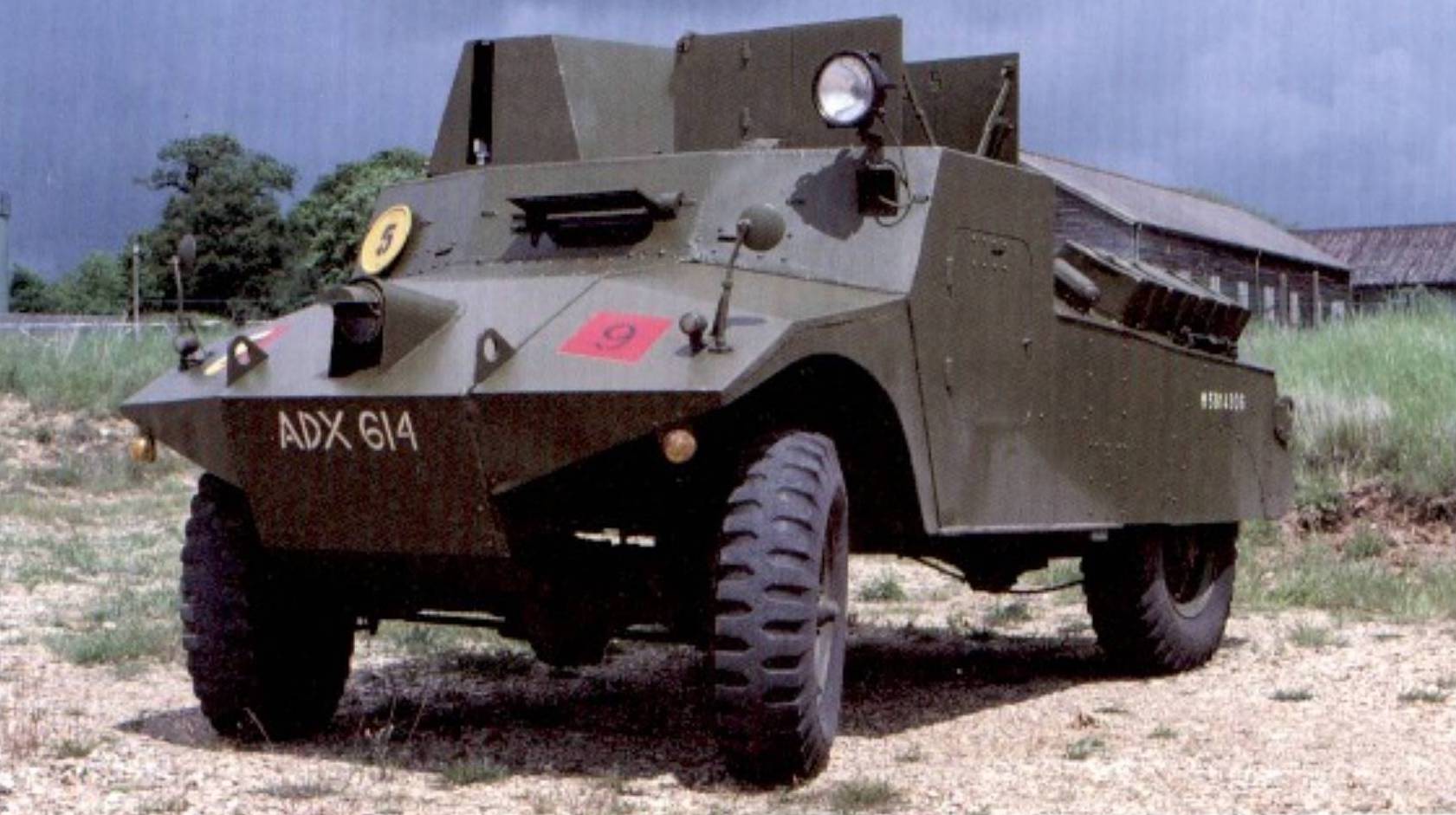 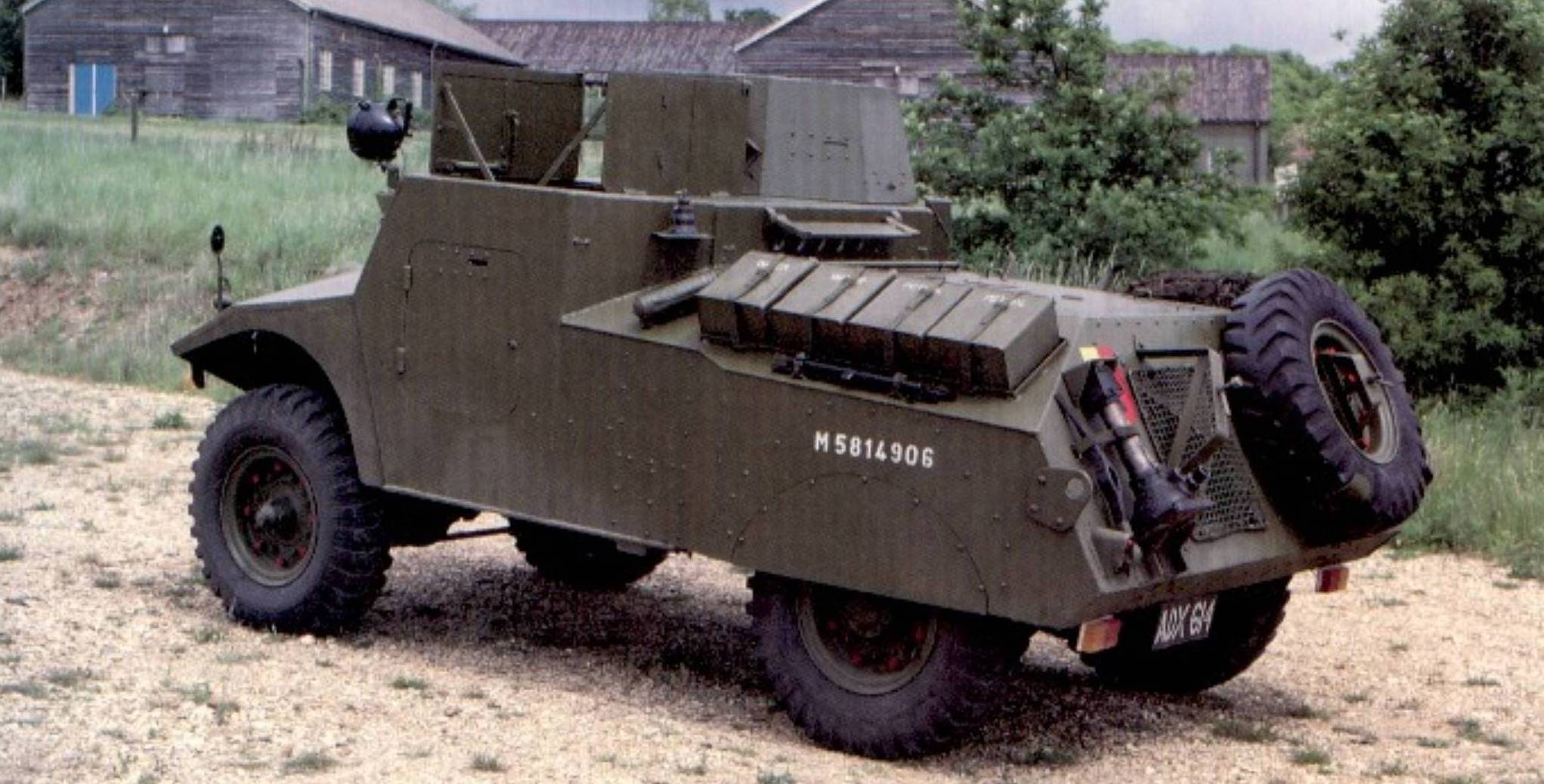 Front and rear views of the Morris Light Reconnaissance Car Mk II, which was armed with a Bren gun and a Boys anti-tank rifle. Over 3,600 of all Marks were built. (TM/Roland Groom)

Pride of the Tank Museum collection is this 1920 pattern Rolls-Royce Mk I armoured car, which saw active service in China, Ireland and the Middle East. It is maintained in full-running order. (TM/Roland Groom) 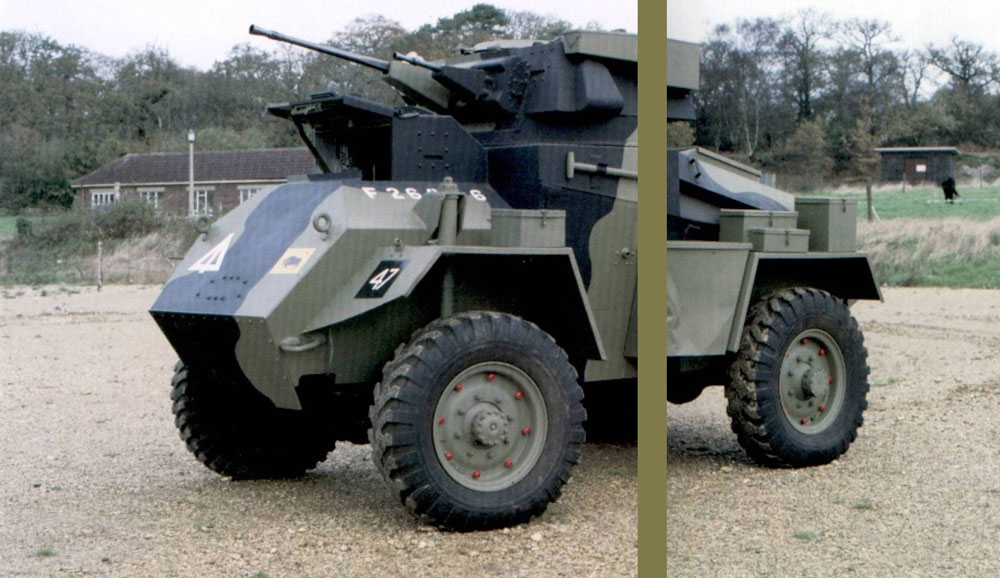 Humber Mk I armoured car. this model, built by the Rootes Group, at their factories in England. All Marks saw service in every area during World War Two. (TM/Roland Groom) 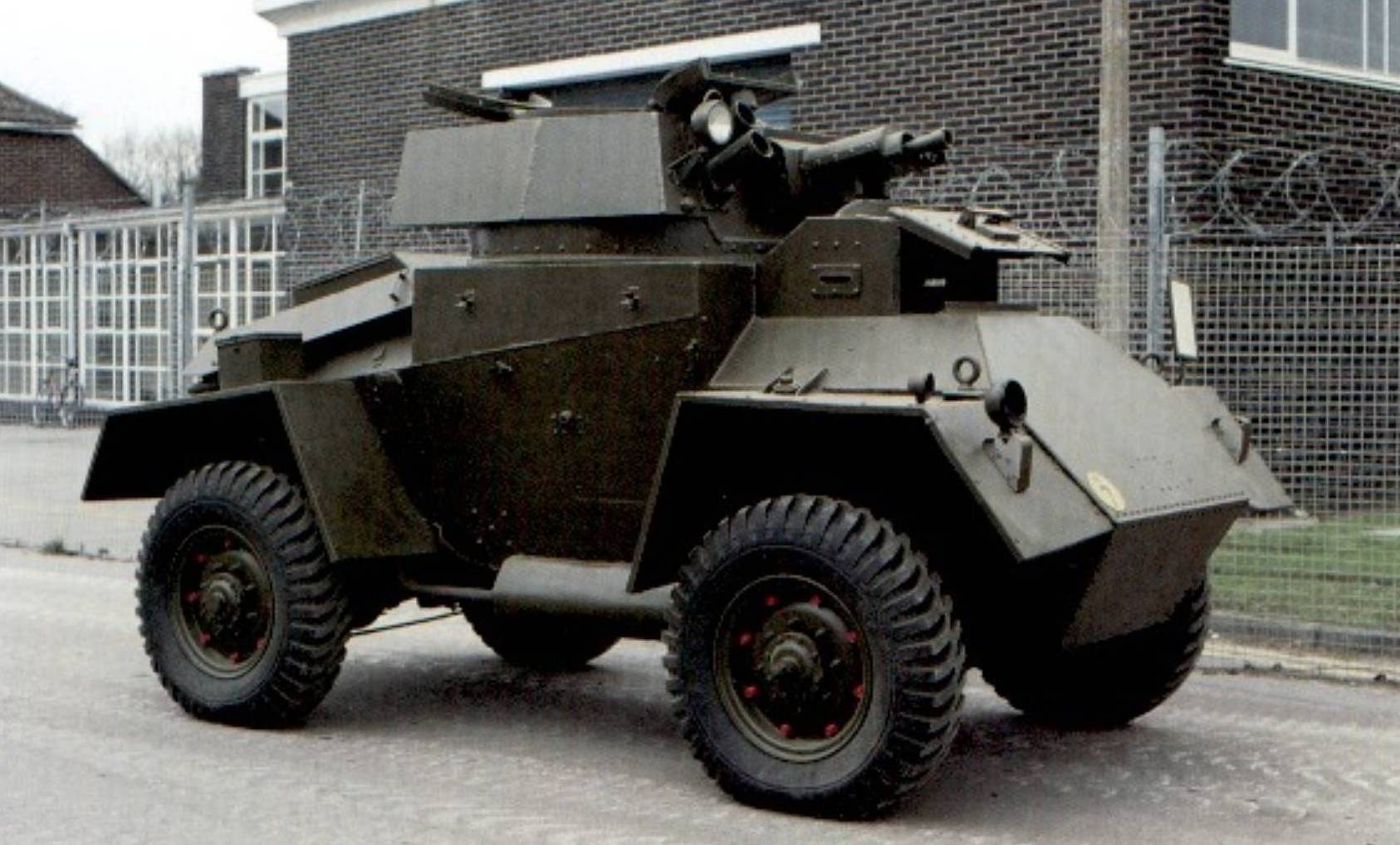 A Guy Mk I armoured car, built in 1939. was also known as the Guy Wheeled Light Tank. It was the first all-welded armoured car produced for the British Army. (TM/Roland Groom) 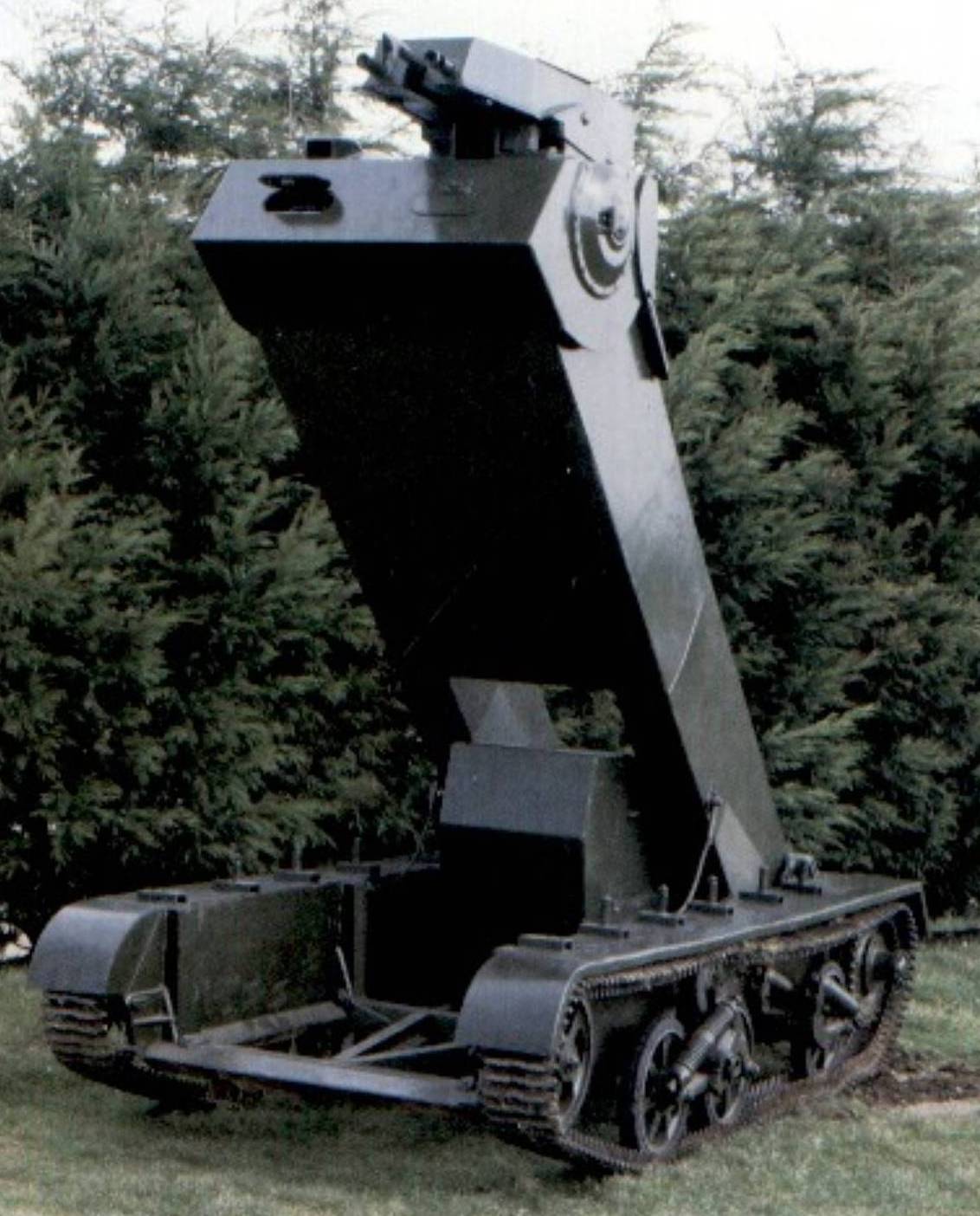 Praying Mantis, a conversion on the Universal Carrier chassis, which mounted twin Bren LMGs in the 'head'. (TM/Roland Groom) 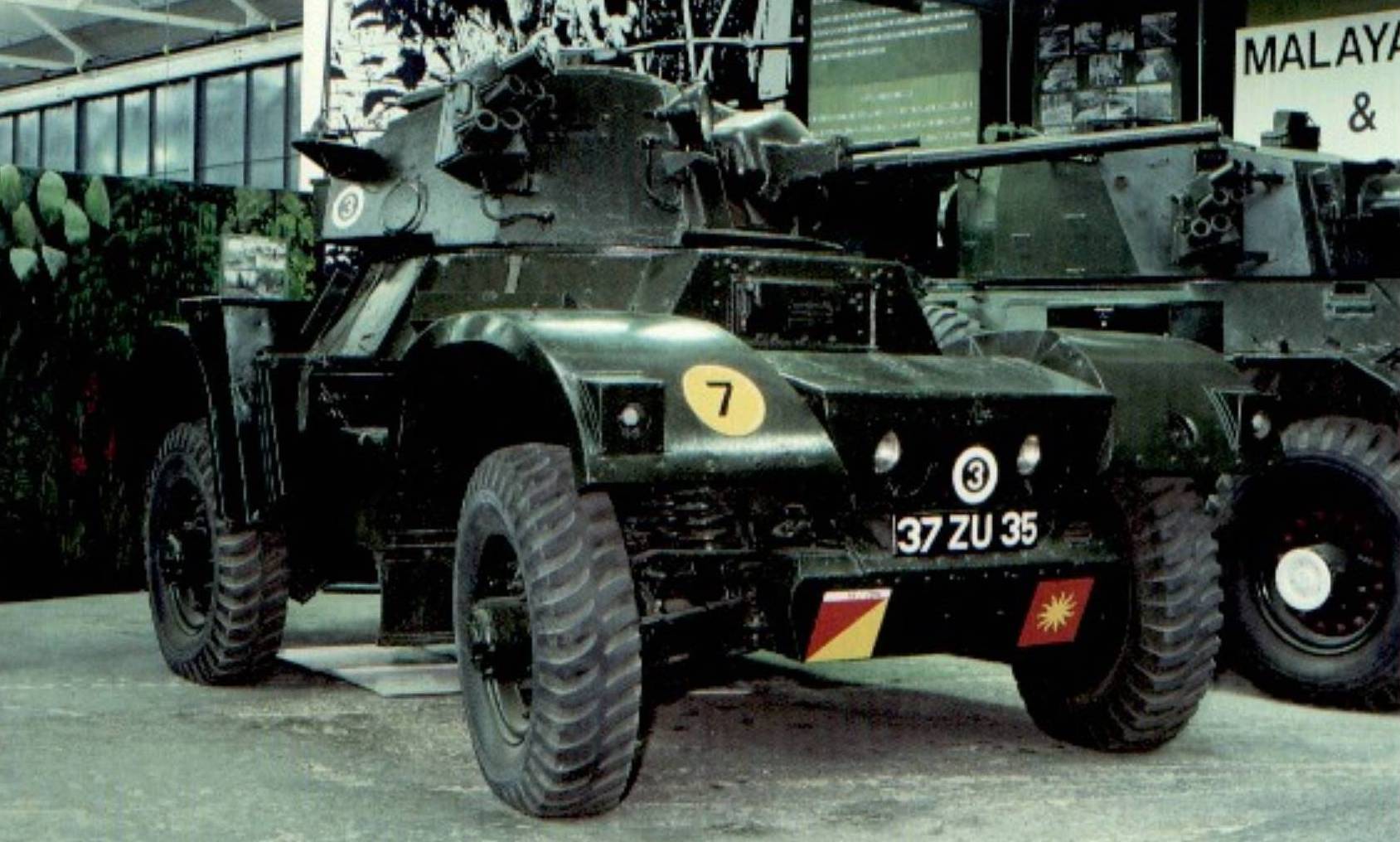 The best British armoured car of World War Two, the Daimler, carried on in service long after the war ended. (TM/Roland Groom) 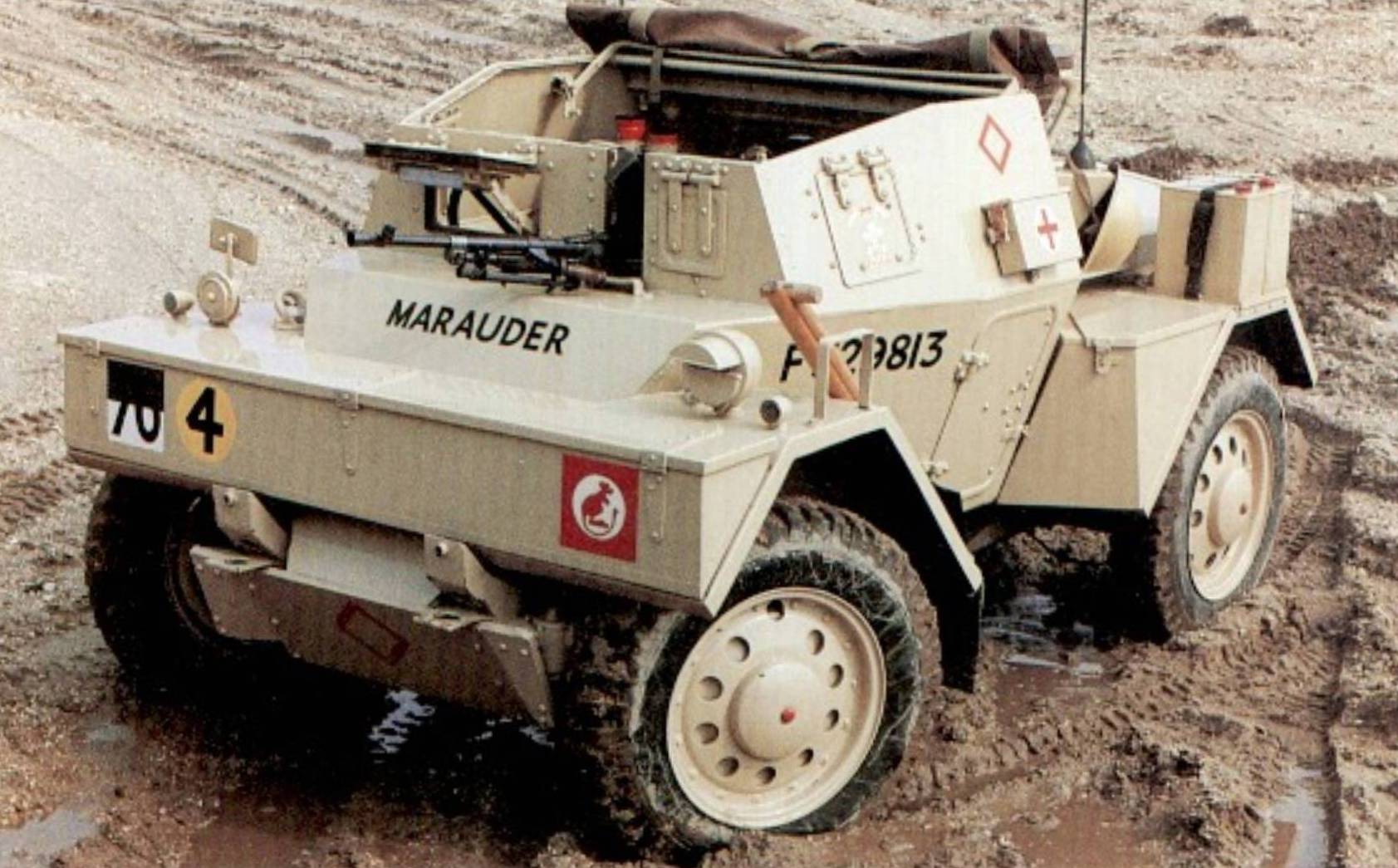 This immaculate Daimler Dingo belongs to Mr Nigel Care, who generously allowed it on long-term loan to the Tank Museum, it was undoubtedly one of the best scout cars of World War Two. (TM/Roland Groom) 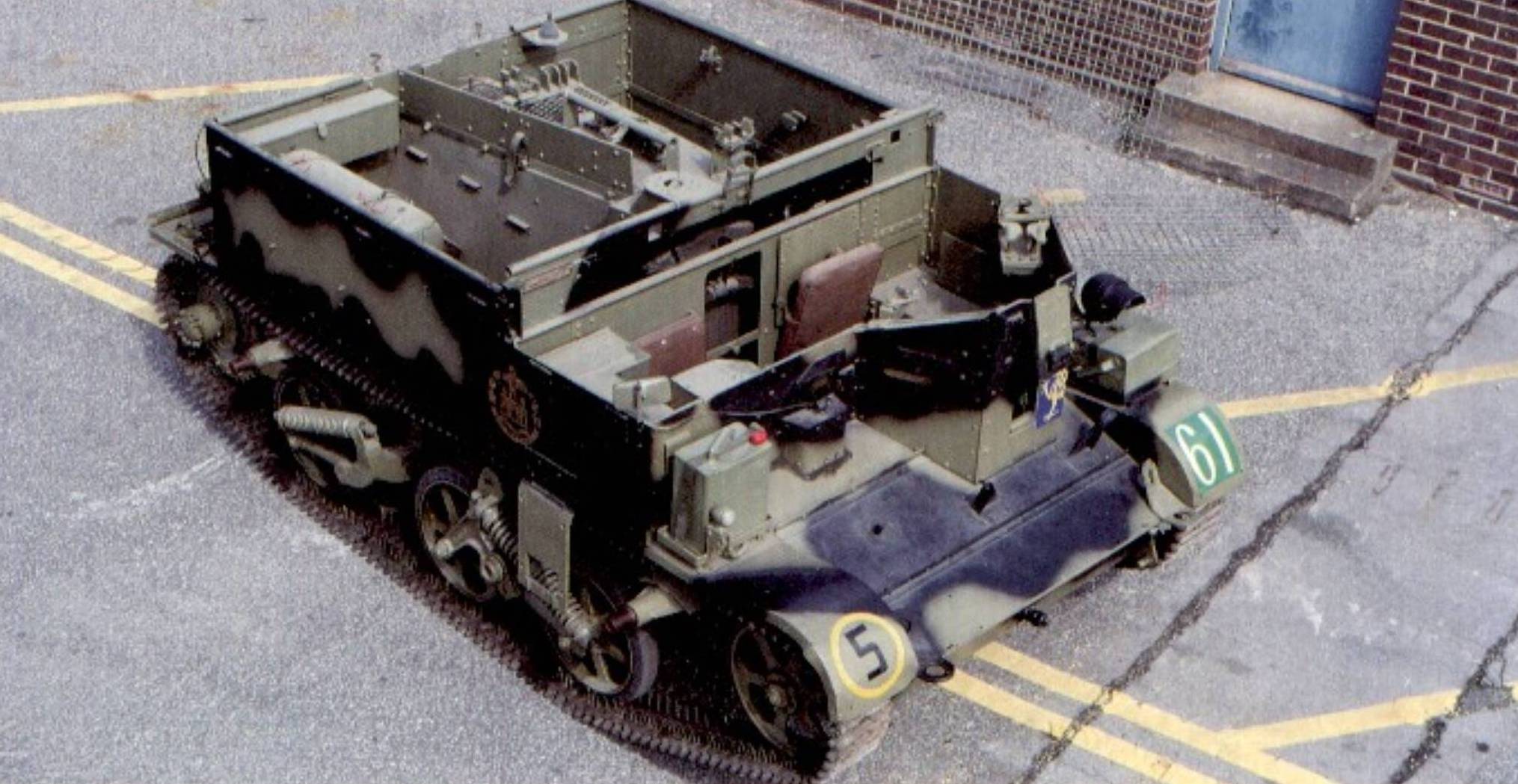 Badged for the 1st Battalion Dorsetshire regiment is this Universal Carrier, which is on permanent display at the Tank Museum. The Bren Carrier, as it was known, was one of the most widely used light AFVs of World War Two. (TM/Roland Groom) 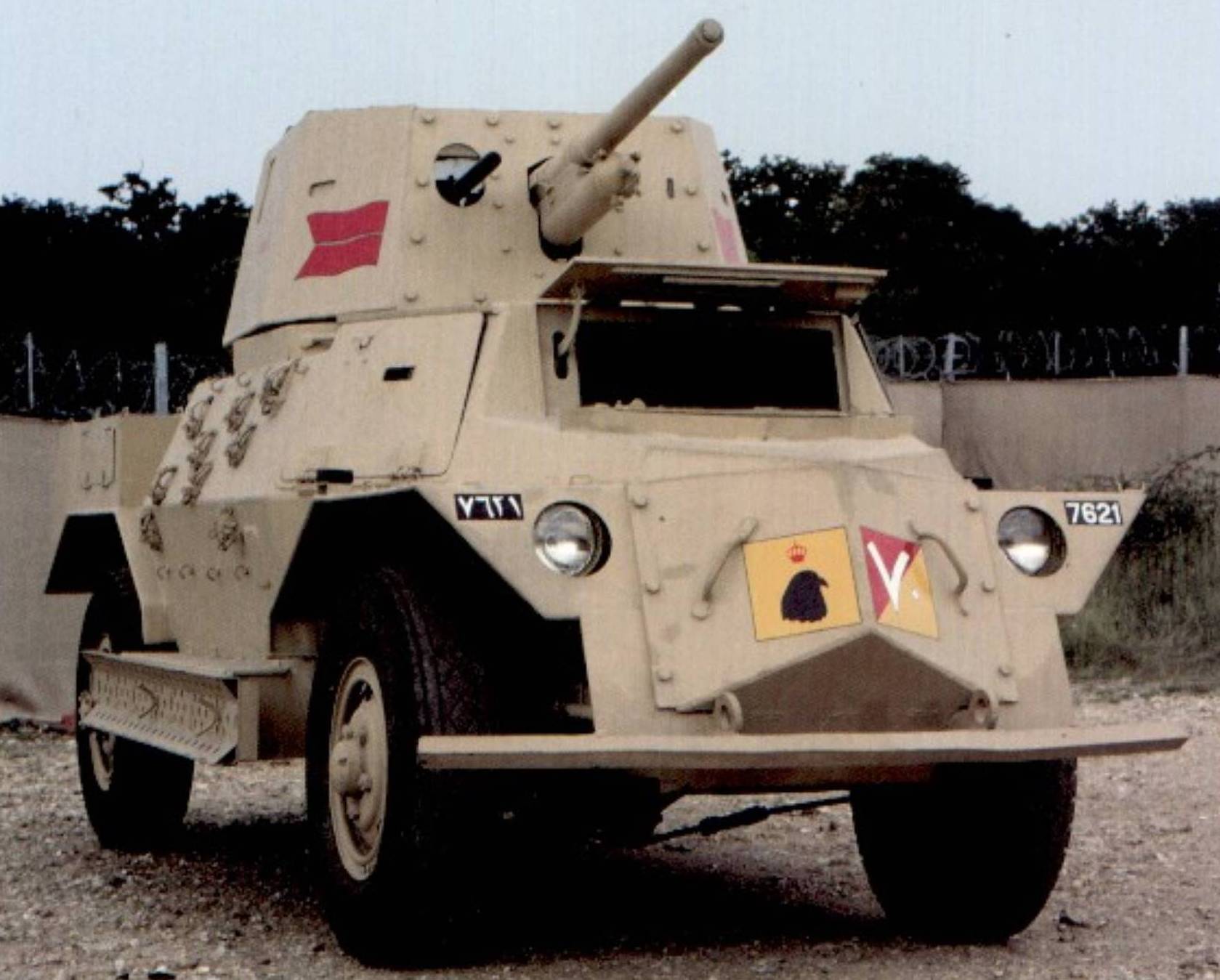 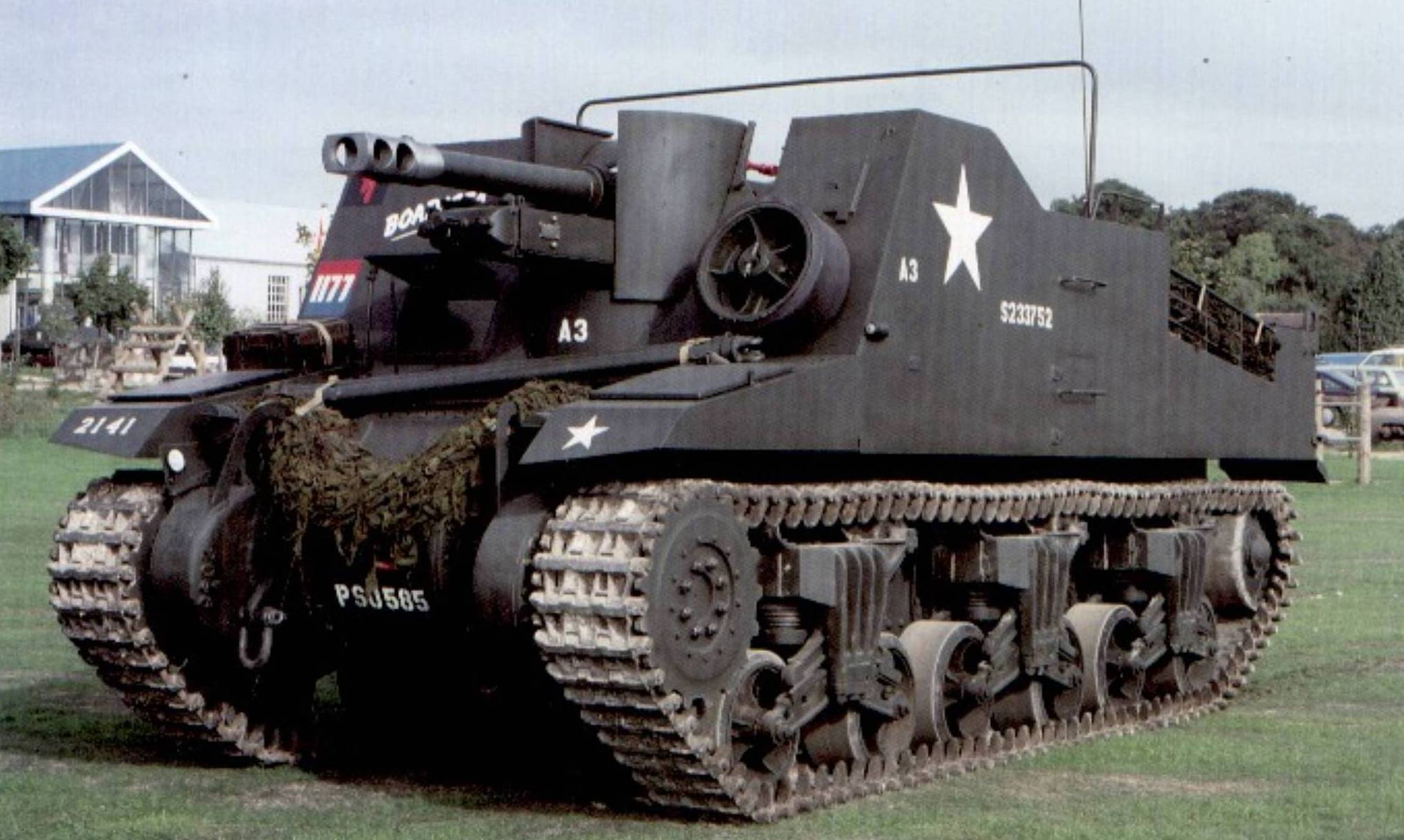 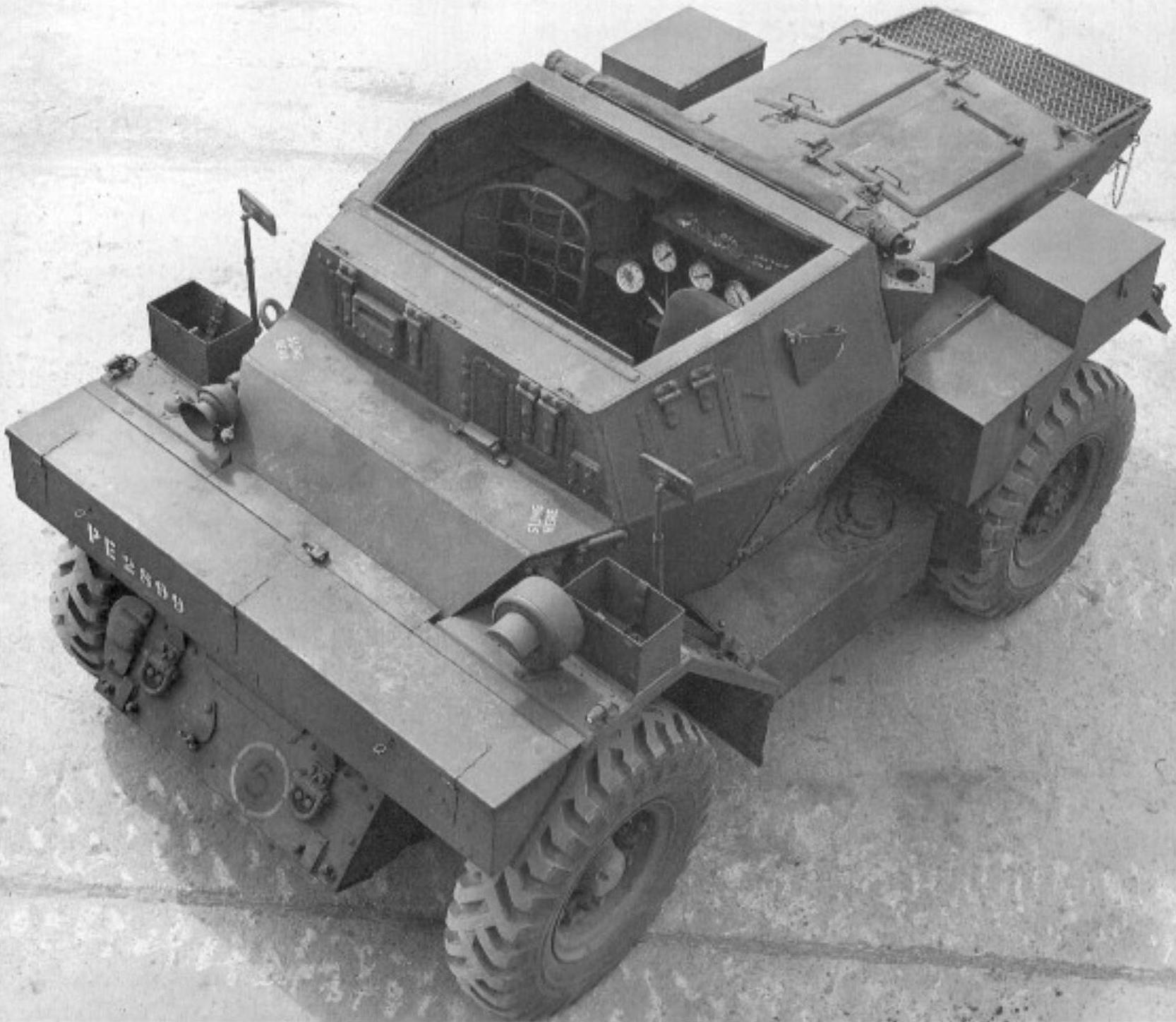 Canada built over 3,000 Lynx scout cars during World War Two. It was almost identical to the British-built Dingo, but slightly larger and heavier. This is a Mk II which had a strengthened chassis but no roof. (TM) 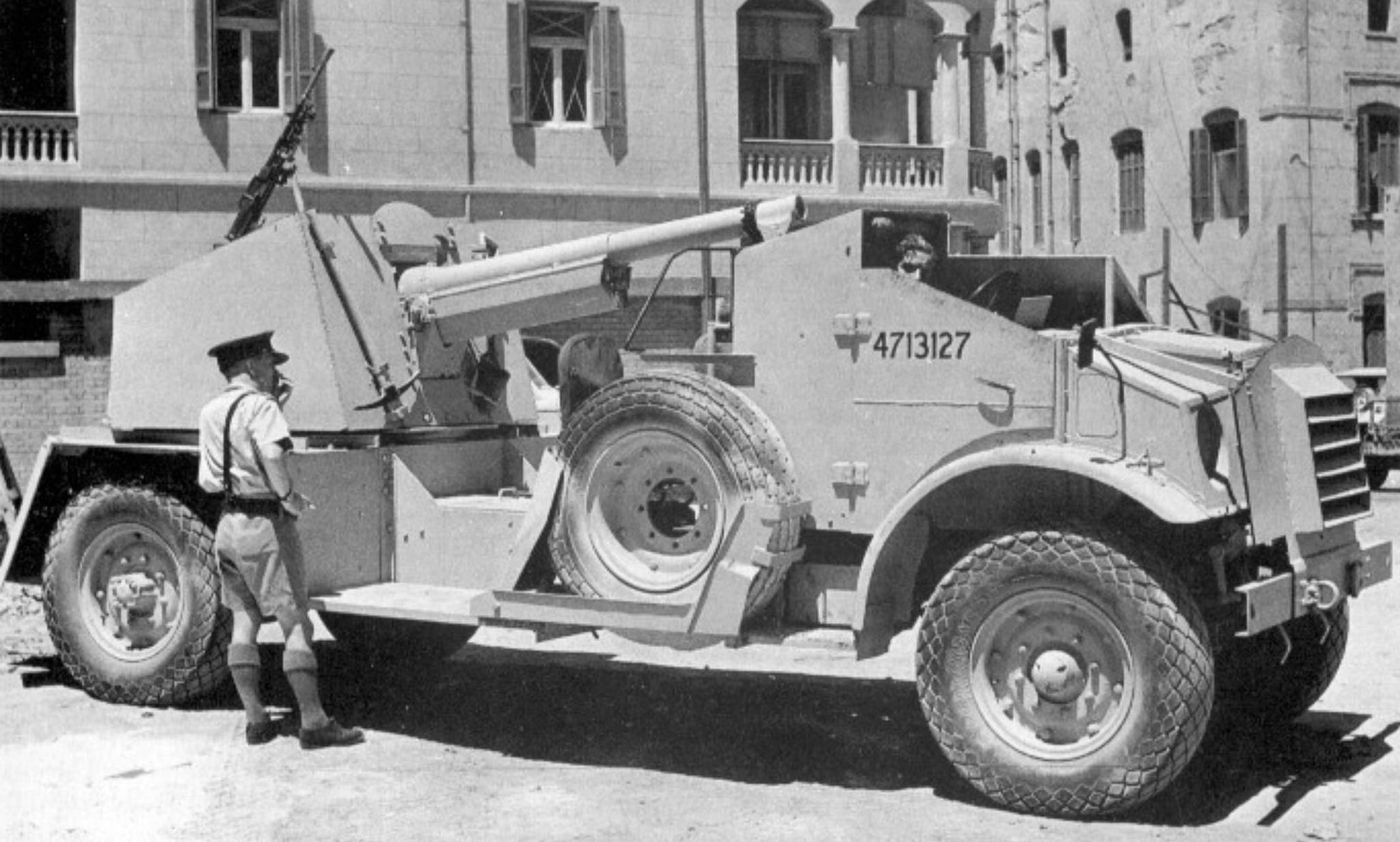 A Canadian CMP 4×4 3-ton truck converted to a SP gun by fitting a French 75mm gun and extra armour. It was used by Free French Forces in North Africa, 1944. (TM)

The experience of the British and Commonwealth forces in the North African desert campaign brought armoured cars into renewed favour.

As with tanks, although eventually Great I Britain and the United States were well able to meet most of the needs of the Commonwealth countries for AFVs, this was definitely not the ease when war began and also during the early years of the war. Armoured cars, scout cars and carriers did not require such heavy industry as was needed for the manufacture of tanks, so the major Common wealth countries were, to a large degree, able to build their own vehicles.

Canada did a quite remarkable job, producing a range of armoured fighting vehicles of quality: which included scout cars, armoured cars and carriers. Canada built a total of 200 armoured cars. 3,255 scout cars and 1,760 light reconnaissance cars during the war, a marvellous achievement.