The port of Antwerp was still useless to the Allies on account of German forces in the Scheldt Estuary, which was not cleared until early November. Then Bradley's 12 Army Group was enlarged by the arrival of the US Ninth Army, and 6 Army Group pushed through the Vosges Mountains to the German border. By 15 December 1944, the Allies were poised to cross the Rhine. 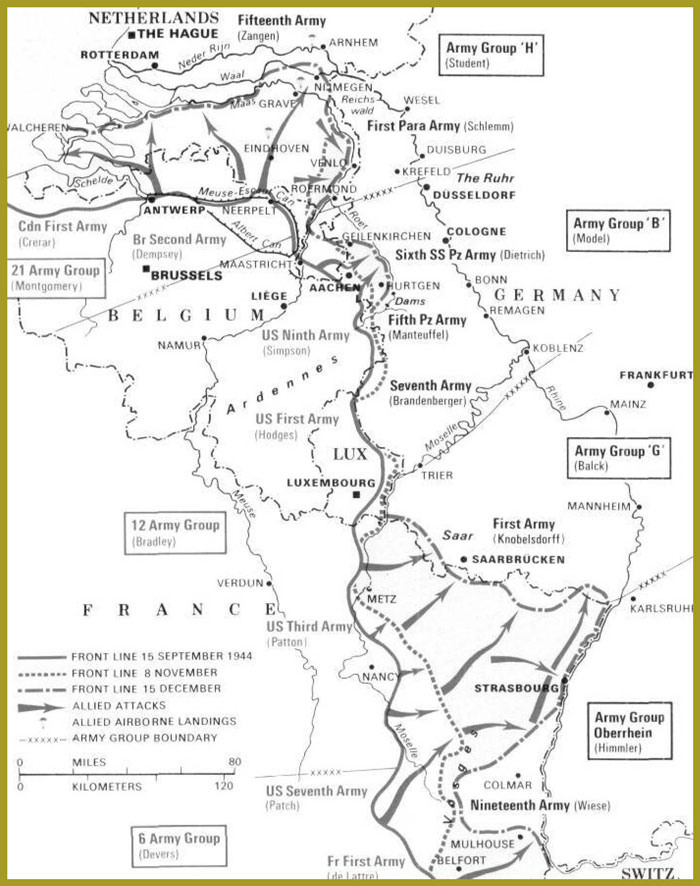 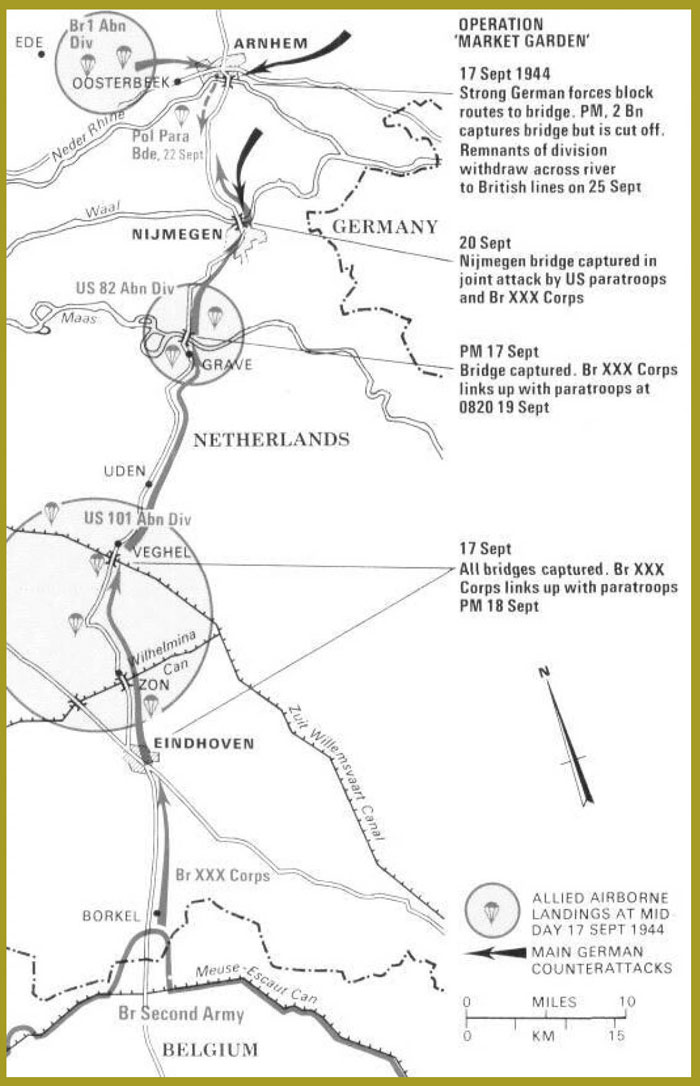 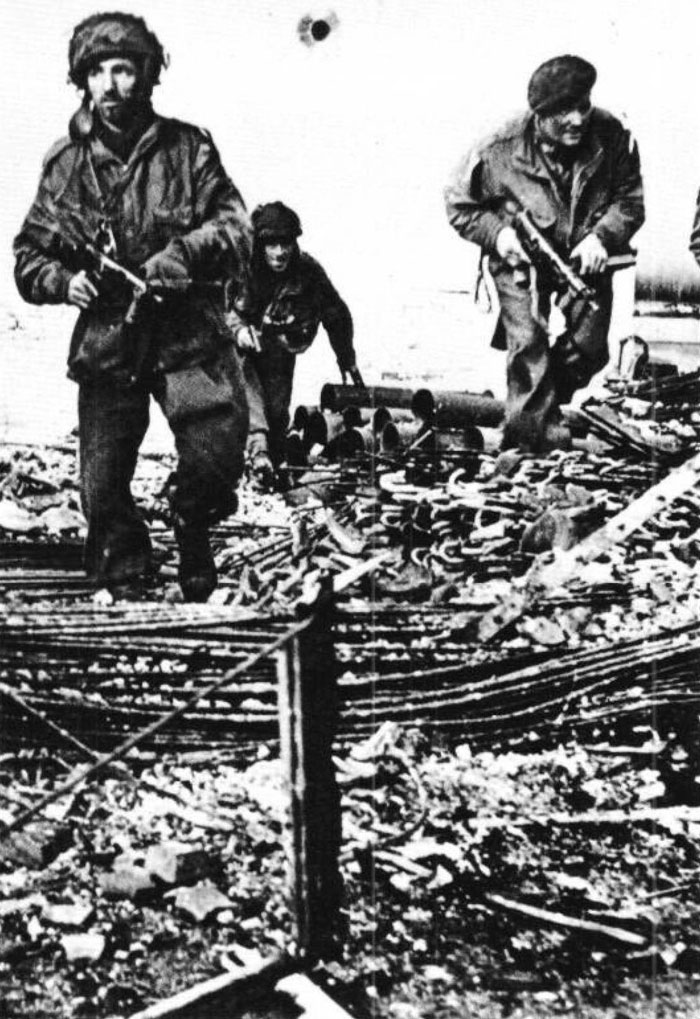 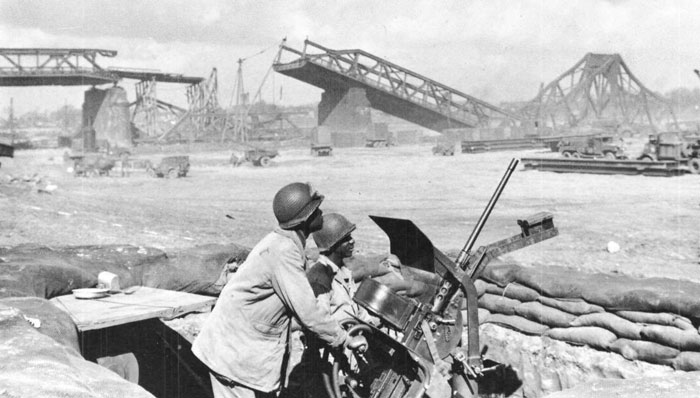 US troops bridge the Rhine.

Germany's Last Throw: The Battle of the Bulge

As they prepared to cross the Rhine into Germany, the Allies discounted any possibility that the Germans would launch a last-ditch offensive. In fact, Hitler had scraped together his last reserves and ordered them to break through the Allied front in the Ardennes, split US and British forces, and drive on to Antwerp to cut off Allied supplies. Twenty-four German divisions, 10 of them armored, were involved in this bold offensive, which came dangerously close to succeeding.

Since they lacked air cover, the Germans were fortunate that low cloud and a heavy snowfall concealed their movements through the Ardennes. On 16 December eight Panzer Divisions appeared seemingly from nowhere to fall upon the US VIII Corps in the first encounter of a six-week struggle. The British would call it the Battle of the Ardennes, the Americans the Battle of the Bulge.

German tactical surprise was complete, and additional confusion spread through the US lines when English- speaking German soldiers in Allied uniforms (carefully coached in American slang) made their presence known. Eisenhower was forced to commit his reserves to the bulge in his line, including airborne divisions that were still resting from Operation Market Garden. The US 101 Airborne Division arrived in Bastogne only to be trapped on 20 December, as German forces prepared to head for the Meuse.

Then the Allies rallied to mount a concerted attack on the German salient by Hodges' US First Army and Patton's Third Army. Montgomery took charge of all Allied units north of the bulge, and Bradley assumed command in the south. By Christmas Eve, the Ardennes Offensive was grinding to a halt for lack of fuel. The Germans were unable to overrun Allied fuel dumps, and stiffening opposition completed their undoing. The last major Luftwaffe effort of the war, against airfields in France, Belgium and Holland, had no effect on the punishing aerial attacks that supported Allied ground forces in the Ardennes.

Hitler's gamble had failed long before 7 February 1945, when the salient was finally eliminated. With it went the last German forces that might have stopped the Russian onslaught now preparing to fall upon the German homeland. 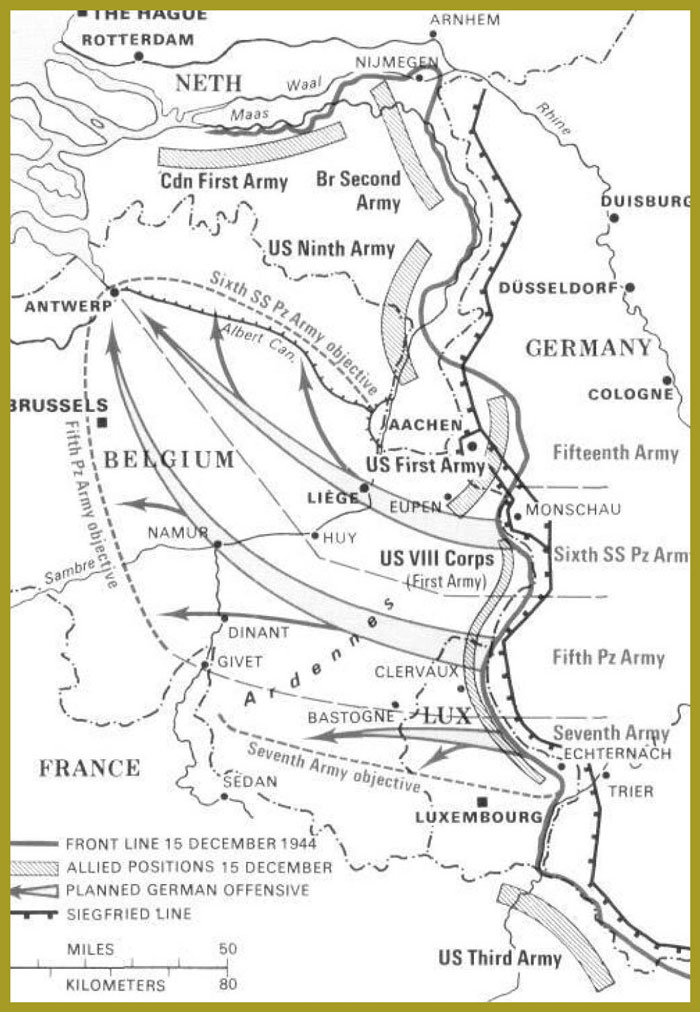 Hitler's plan to split the British and US forces by making for Antwerp. 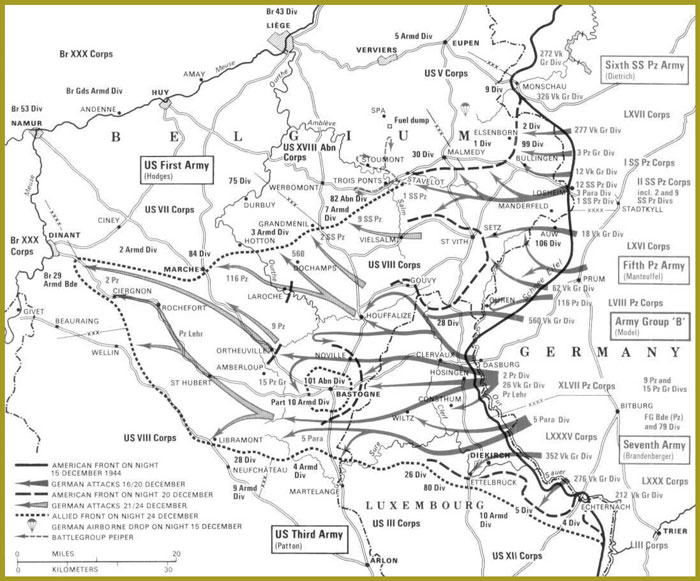 The Panzers break out into the Ardennes. 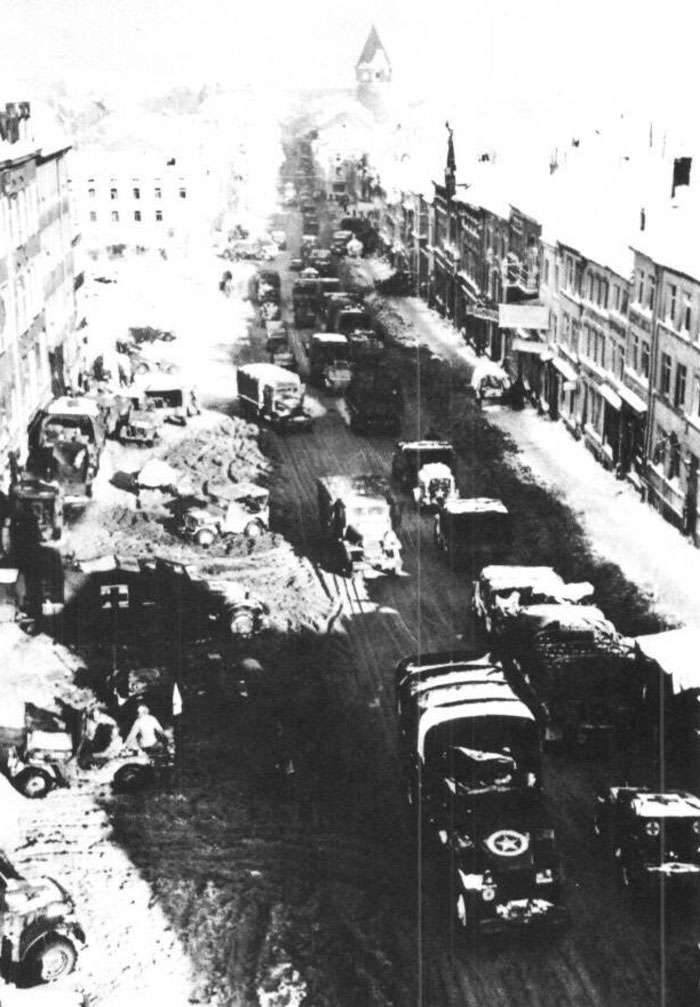 An Allied supply line rolls through Bastogne in January 1945 after its relief. 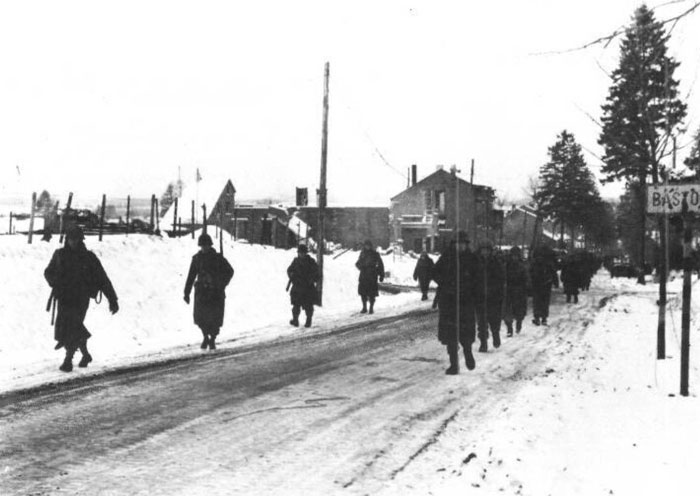 Bastogne under siege in December 1944; the US 101st Airborne Division defends the perimeter.

The Rhine River was the greatest water obstacle in Western Europe, and no Allied leader expected to cross it with impunity. Not until early March 1945 were sufficient forces in place to attempt the capture of a vital bridge. This was achieved on 7 March in a brilliant stroke by men of Hodges' US First Army, who seized the Ludendorff railroad bridge at Remagen intact, then established a bridgehead with bewildering speed. Valuable as this was, additional crossings had to be secured both up- and downstream of Remagen before it could be exploited.

On 22 March, US Third Army made a second crossing at Nierstein, soon followed by others at points from Nijmegen to Mannheim. Wiesbaden was captured on 27 March; the day before, US Seventh Army had crossed near Worms to link up with Patton's Third Army on the east bank. From 31 March onward, the French First Army began to force crossings south of Mannheim, and within a week's time the Germans had lost all their positions on the Rhine's east bank. 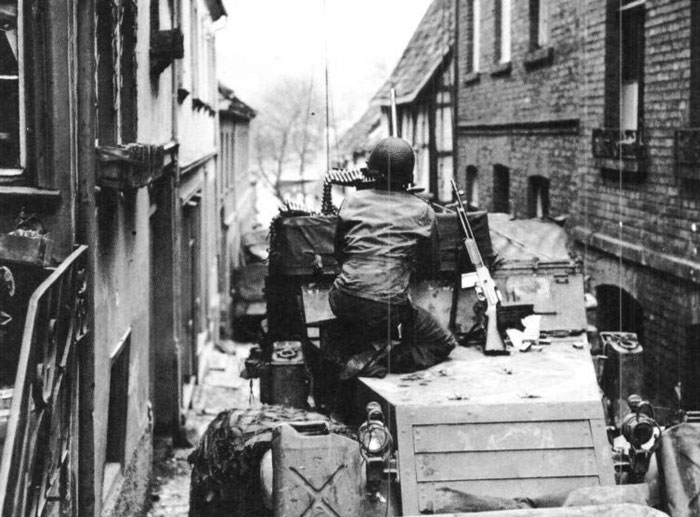 A US Army half-track guards against air attack at Remagen, a key Rhine crossing-point captured on 7 March. 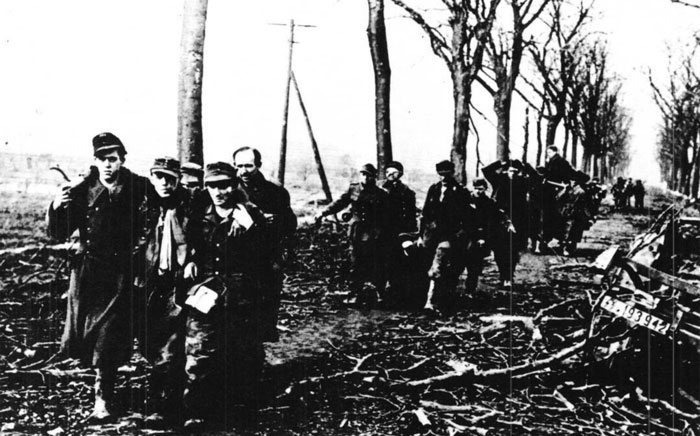 German prisoners taken in the drive to the Rhine east of the Roer river, February 1945. 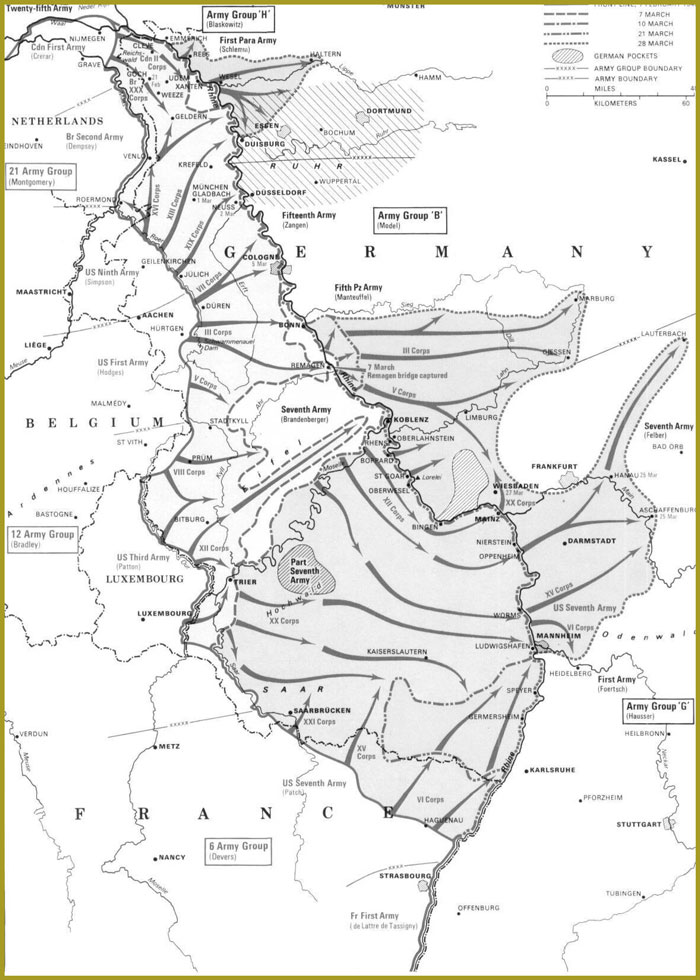 The Drive into Germany

The Allied advance through Germany from the Rhine to the Elbe met bitter opposition at several points where determined German leaders still commanded veteran troops. But for the most part, resistance was minimal; German units lacked food, fuel, ammunition and leadership by this time, and many welcomed the opportunity to surrender to the Americans rather than face the Russians.

Eisenhower had focused most of his attacks in the south, due partly to reports that the Germans would retreat to an Alpine Redoubt' whose unspecified location was largely in Hitler's mind. First and Third Armies had crossed the Rhine south of Aachen with unexpected ease, and German communications had broken down almost entirely. There is no doubt that the Allies could have reached both Berlin and Prague in April 1945, but US commitments to the Soviet Union mandated a halt on the Elbe. As the Allied armies advanced through Germany to link up with the Russians, they discovered Belsen, Buchenwald and other camps whose infamies had been rumored but not fully known until that time. Anger against the Nazi regime hardened with every appalling discovery, as films and pictures from the camps began to reach the world. 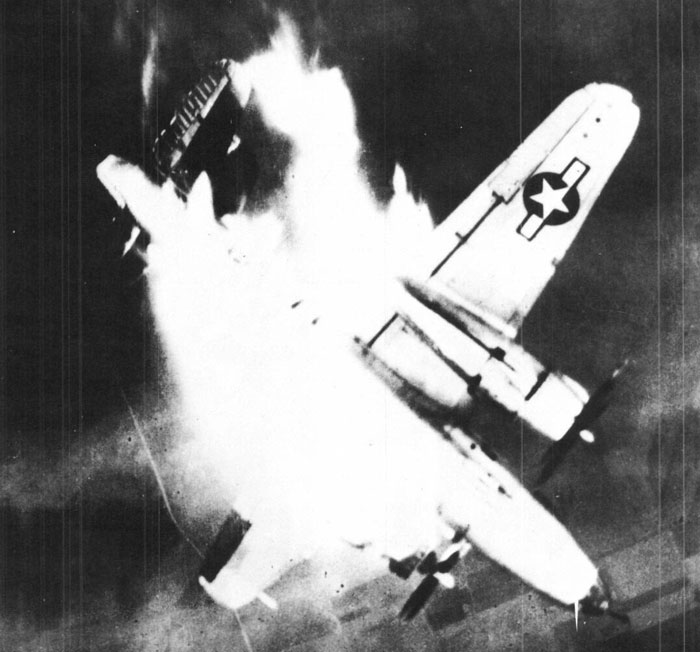 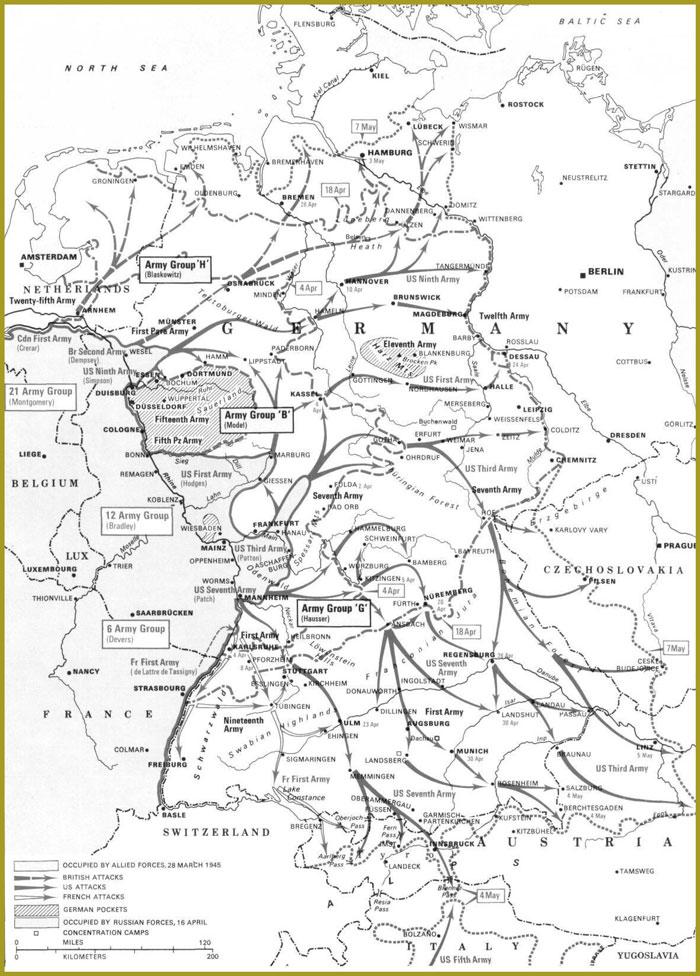 The Allied drive into Germany halted at the Elbe.

The Fall of Berlin

By mid April 1945, Soviet forces along the Oder were ready to advance on Berlin. Konev's 1 Ukrainian Front and Zhukov's 1 Belorussian Front (some 2,500,000 men) faced a million German defenders in strong positions on the Oder's west bank. The desperate Germans were keenly aware of the consequences should the Russians break through, and they were prepared to fight as never before.

The opening Russian bombardment employed a record-breaking concentration of one gun per 13 feet of front. It was a fitting prelude to one of the most ferocious bouts of the war. Only two small bridgeheads were achieved in the first two days (16-18 April), but deeper penetrations were made in the following 48 hours. By 20 April. German resistance on the Oder was shattered, and five days later the two Russian forces had encircled the city to meet on its west side. It was on the same day, 25 April, that US and Soviet forces made contact on the Elbe at Torgau.

Berlin contained 2,000,000 civilians and a garrison of some 30,000. Its rudimentary defenses were wholly unequal to the forces massed against it, but the city resisted to the last. From 26 April to 2 May, fighting raged in the streets, as the two Russian armies moved in from north and south to meet across the Charlottenberg Chaussee. Before they made contact, the Reichstag fell (30 April), and Hitler died by his own hand, naming Admiral Karl Dönitz as his successor.

On 4 May 1945, General Montgomery accepted Germany's unconditional surrender, and three days later the war in Europe was formally at an end. The victors divided both Germany and Berlin (which was deep in the Soviet sector) into four zones each, to be controlled by the four major Allies. The stage was set for Soviet hegemony in Eastern Europe, the Cold War, emerging nationalism among former subject peoples around the world, and the precarious new balance of power that persists to this day. 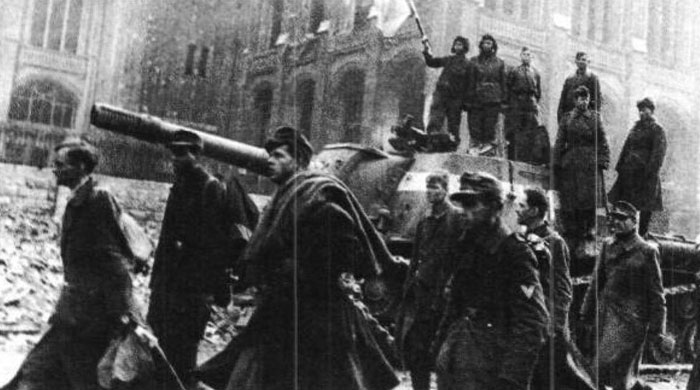 The victors and the defeated. Soviet troops enter Berlin, May 1945. 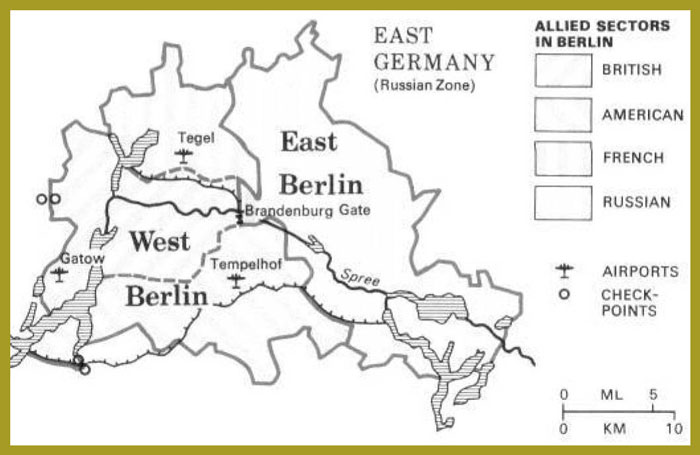 The partition of Berlin. 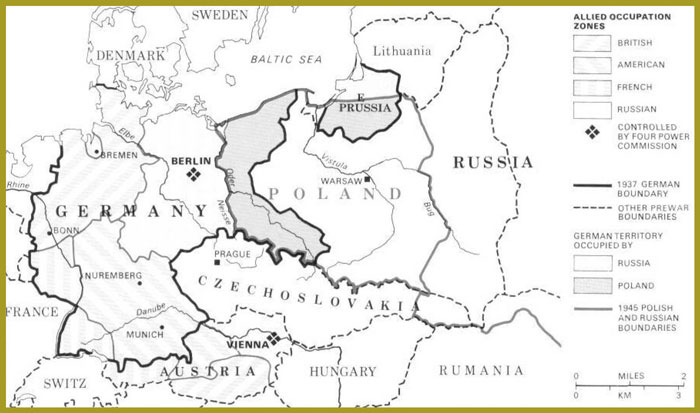 Occupied Germany as it appeared at the war's end. 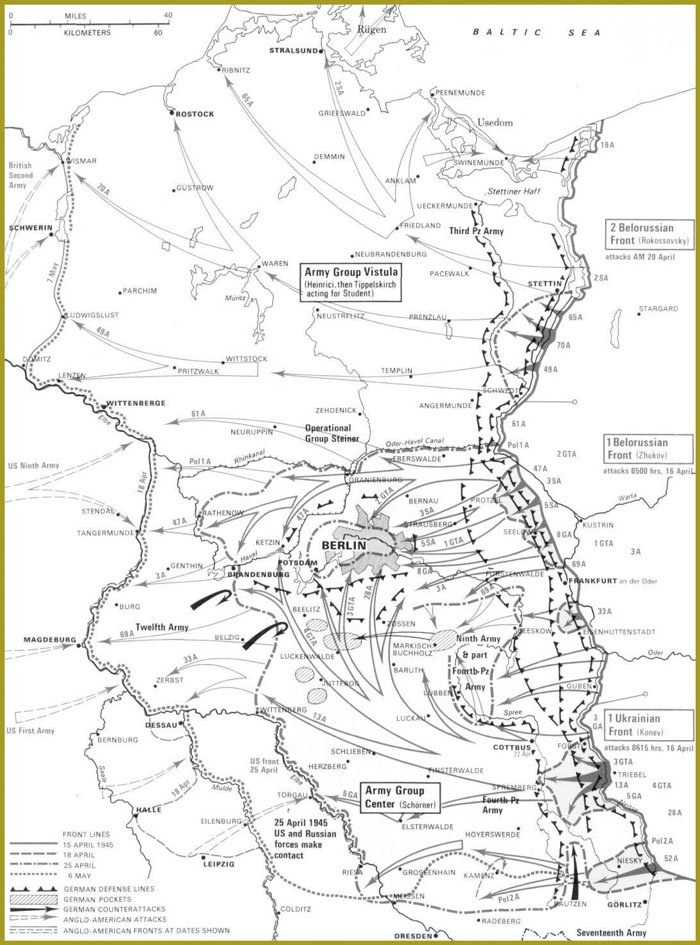 As Berlin falls, the war in Europe comes to an end.