Guadalcanal provided a jumping-off place for successive conquests in the Solomons, culminating with Bougainville in October 1943. The campaign was characterized by surprise landings, followed by hasty construction or repair of airstrips for local defense and as bases for the next attack. Even strongly garrisoned islands like Bougainville, which had 60,000 widely scattered defenders, were seized and isolated, while Japanese strong points at Rabaul and Kavieng were bypassed. The Solomons Campaign wound down in mid 1944, after successful Allied landings on New Britain and the Admiralty and St Matthias groups. 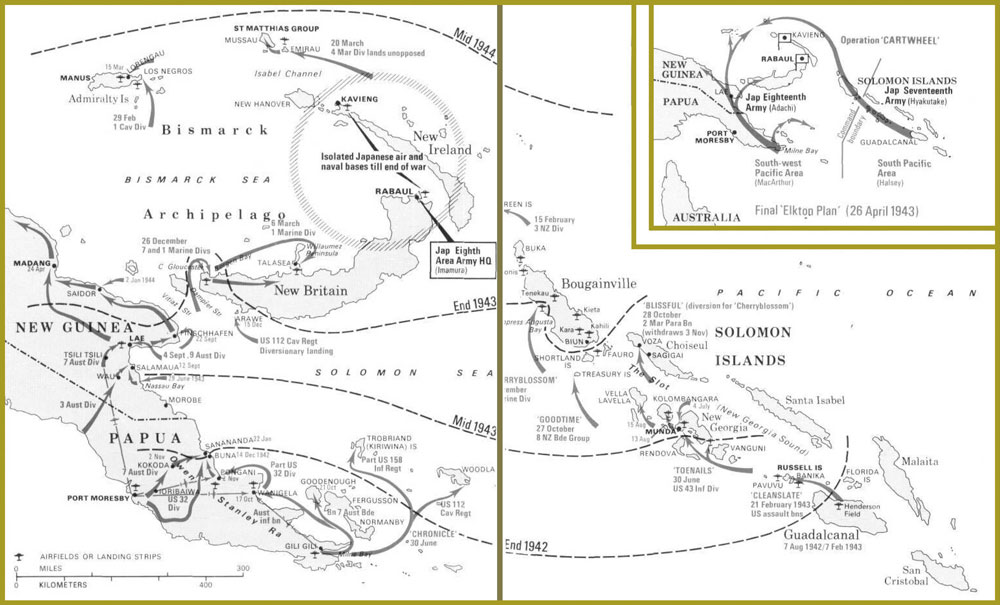 Occupying the Solomons was a lengthy process that took the Allies over ay ear to complete.

An attack by US aircraft at the beginning of the battle for Guadalcanal.

US Marines landing on the island head immediately for cover. 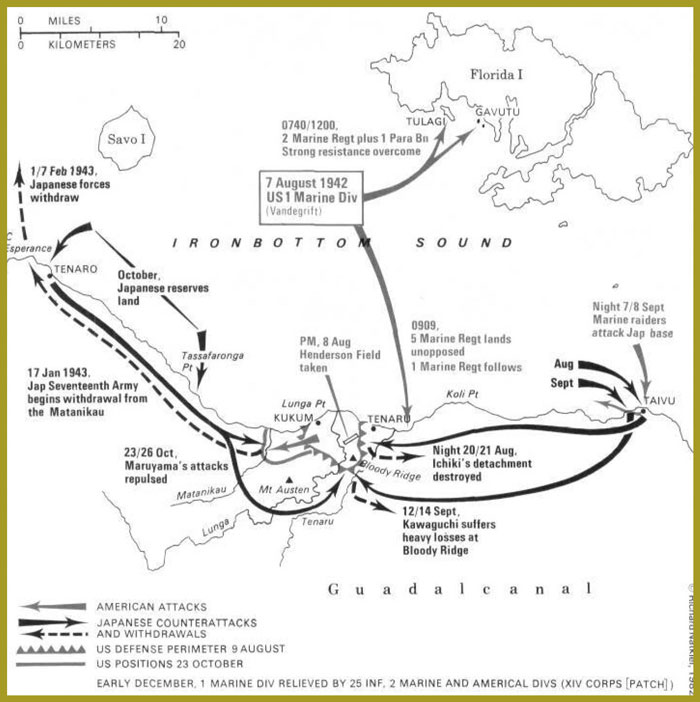 US landings on Guadalcanal and the resistance encountered. 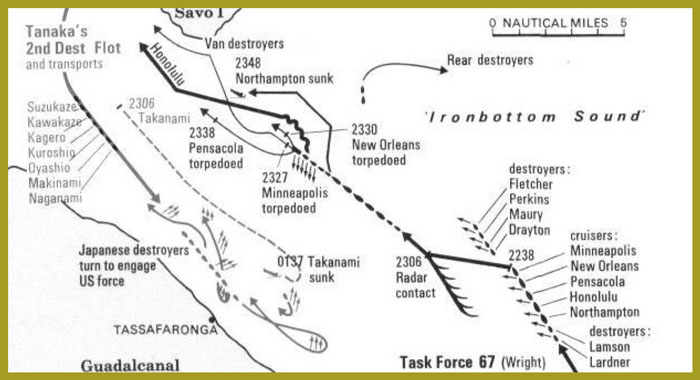 Japanese supply ships and their escorts met US Task Force 67 near Tassafaronga on 30 November 1942 in one of the many naval actions off Guadalcanal. On this occasion, the Japanese emerged on top. 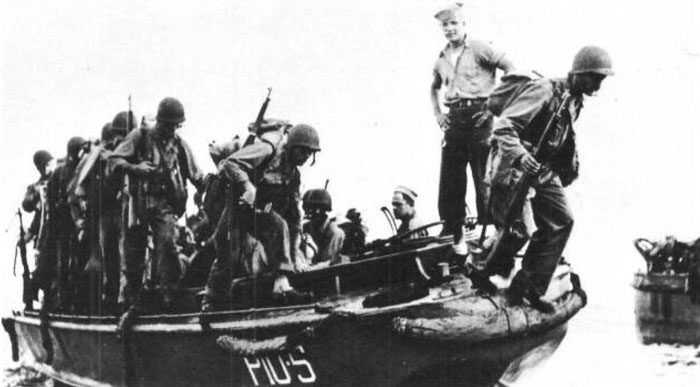 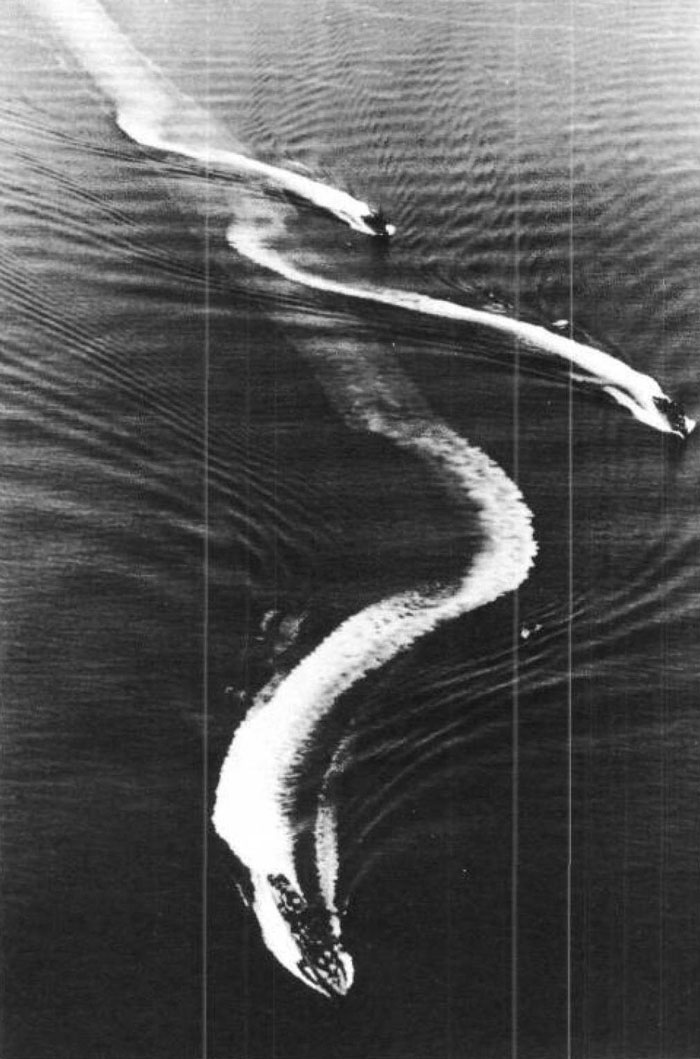 US Navy vessels weave to counter air attack off the Solomons. 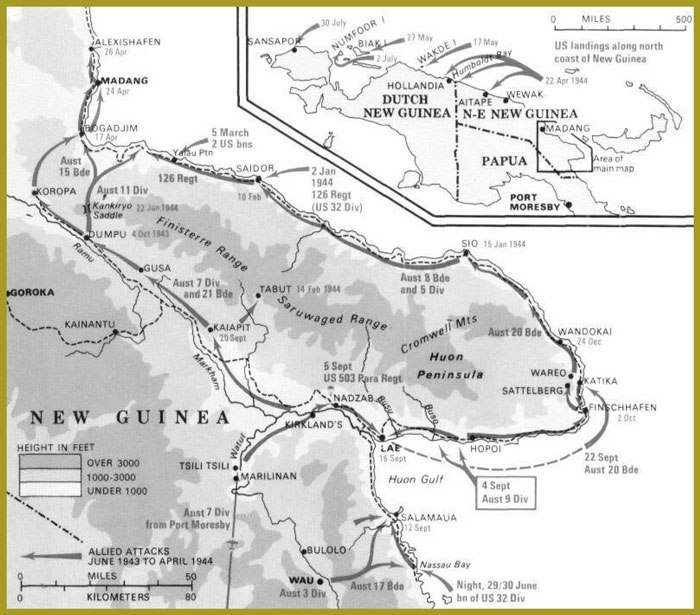 US landings on New Guinea.

General MacArthur (right) passes an encouraging word with a paratrooper at Port Moresby.

The Japanese made a second attempt against Port Moresby in July 1942 - an overland advance from Buna - but it was stopped by Australian formations in September. Allied forces built an airstrip at Milne Bay, then proceeded over the Owen Stanley Range against totally adverse ground and weather conditions to capture Buna and Sanananda at year's end. Australian coast-watchers were instrumental in Allied success by providing early warning of Japanese moves, but all combatants were plagued by tropical disease, grueling terrain and a lack of accurate maps of the area.

After Buna fell, Lae and the Markham Valley were captured with the assistance of Allied air forces (excellent coordination of all the services involved was a feature of this campaign). A series of operations around the Huon Peninsula was followed by major landings at Hollandia and Aitape in April 1944. These cut off some 200,000 Japanese troops and numerous civilian workers centered around Wewak. The final New Guinea landings, at and near the northern tip of the island, secured airfields to be used in support of operations in the Marianas and the Philippines. By July 1944, an entire Japanese Army had been neutralized in New Guinea, and the Solomons Campaign had nullified the threat to Australia and New Zealand.

The Battle of the Philippine Sea

After clearing the Marshall Islands, the US trans-Pacific drive converged on the Mariana group, whose conquest would cut off the Japanese homeland from the Philippines and Southeast Asia. When the US assault fell on the main Japanese defenses at Saipan, Tinian and Guam, the Japanese Navy was there to counter it (June-July 1944).

Ozawa compounded his errors by lingering in the vicinity, with the result that he lost three more ships the following day. The US had lost only 50 planes and suffered slight damage to a single battleship. Ozawa's reputation as an outstanding commander was impaired by this disaster, but his resignation was refused by his superiors and he fought again at the Battle of Leyte Gulf with skill and tenacity. By that time, however, the Japanese defeat was inevitable. 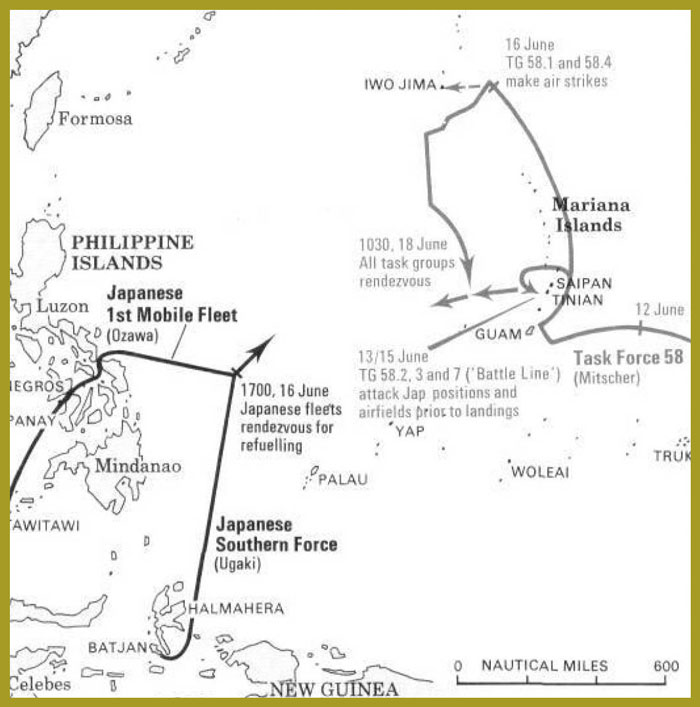 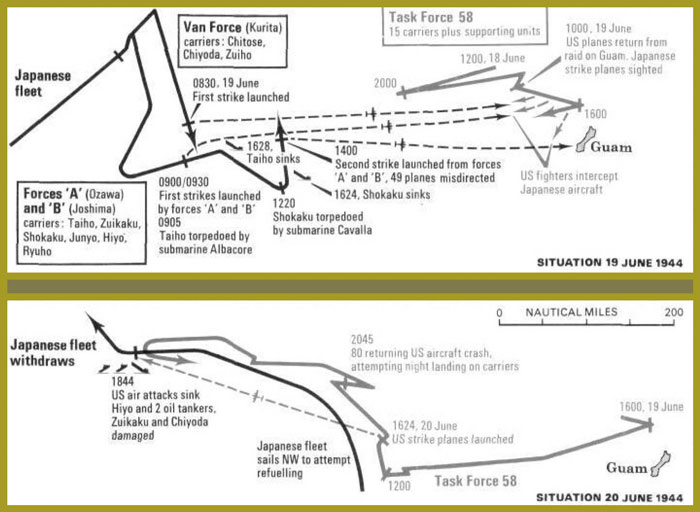 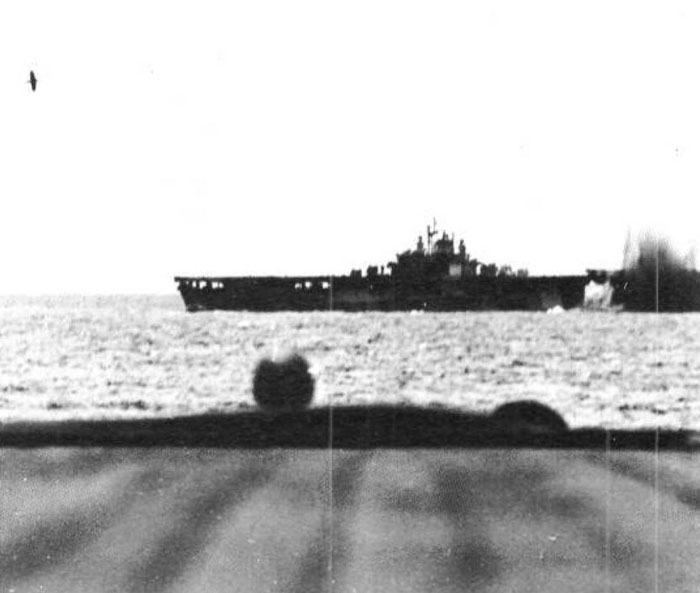 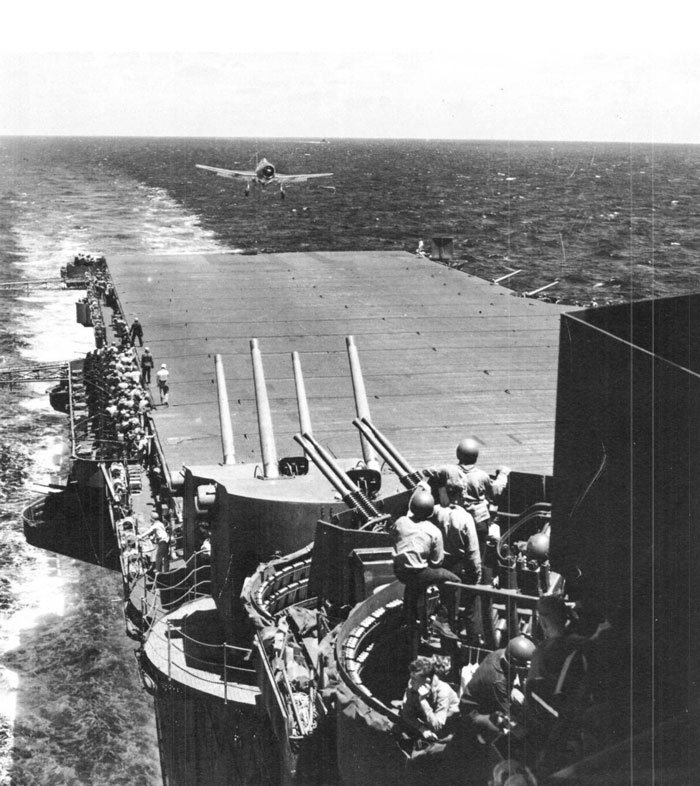 Return of an F6F-3 Hellcat fighter to Lexington during 'The Great Marianas Turkey Shoot'.

The Struggle for Leyte and Luzon

General Douglas MacArthur's overriding desire to liberate the Philippines played a major part in the Allied High Command decision to make landings on Leyte in October 1944. MacArthur's forces joined Nimitz's for this operation, in a rare display of cooperation between these two competitive leaders. Only 20,000 Japanese held the island against 130,000 men of General Walter Krueger's Sixth Army, who landed on 20 October. Japanese reinforcements could not keep pace with this kind of manpower. By Christmas 1944, major engagements were almost over, with Japanese casualties estimated between 50 and 80,000. The Americans had lost only 3600 men.

At sea, four major actions comprised the Battle of Leyte Gulf (21-25 October), in which Japan sought to prevent the Americans from regaining a foothold in the Philippines. Admiral Ozawa's depleted carrier force was to serve largely as a decoy, luring Admiral Halsey's powerful Third Fleet away from the main action. The real fighting was assigned to four task forces of Japanese battleships and cruisers, which were still plentiful. On the US side, Halsey's force was augmented by Admiral Kincaid's Seventh Fleet, backed by carrier formation TF.38. 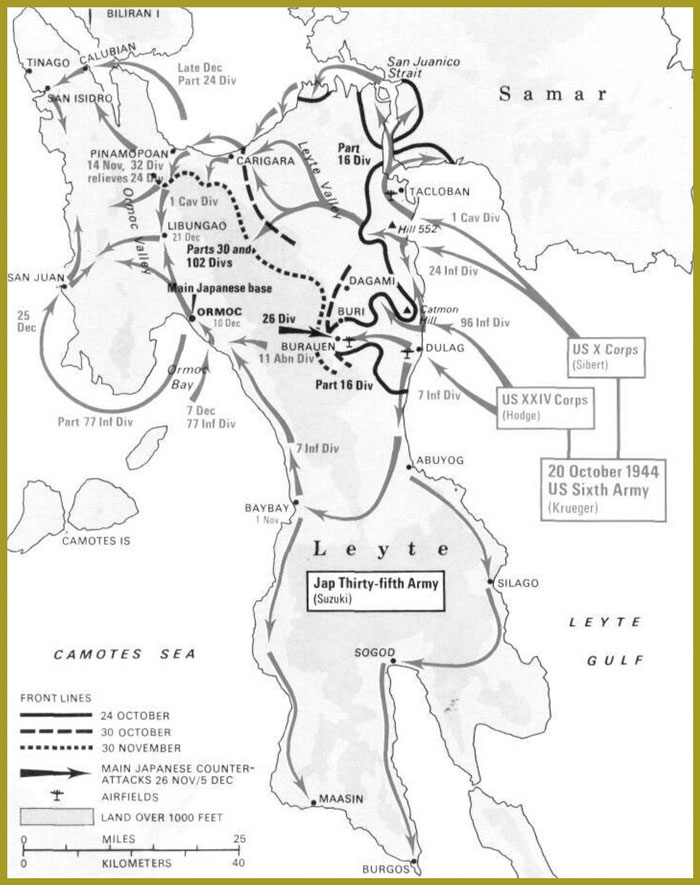 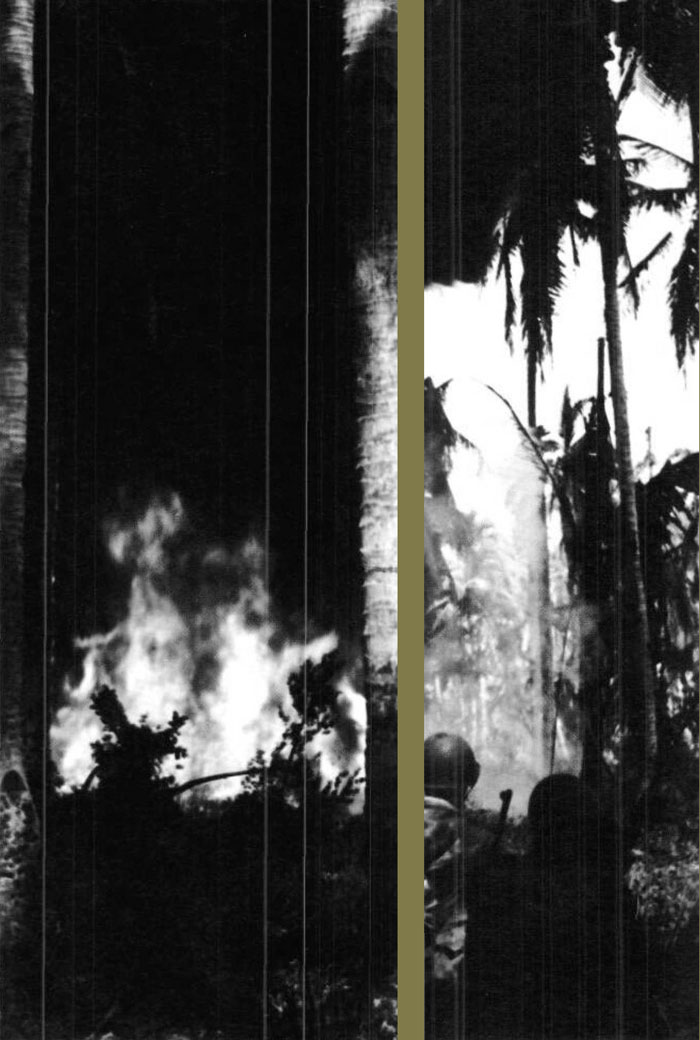 A Japanese fuel dump on Leyte blazes as a result of naval shelling. 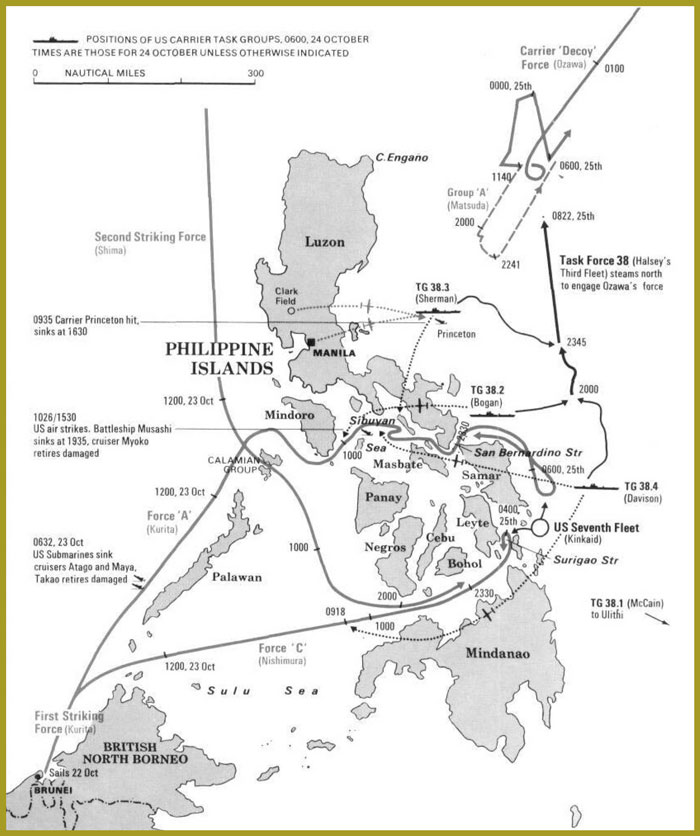 The sea actions comprising the Battle of Leyte Gulf resulted in a US victory despite the involvement of three separate Japanese forces. 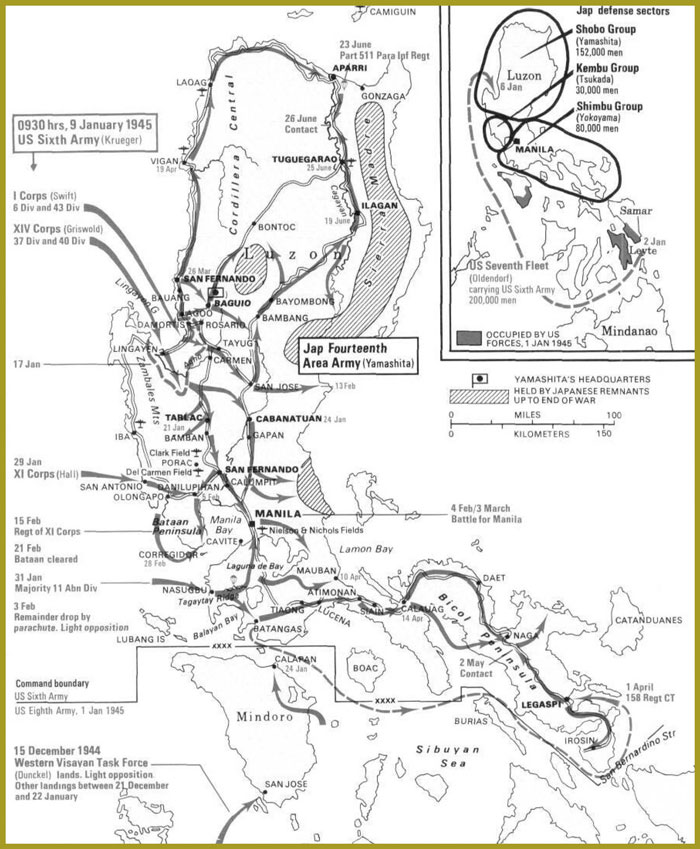 The capture of Luzon. 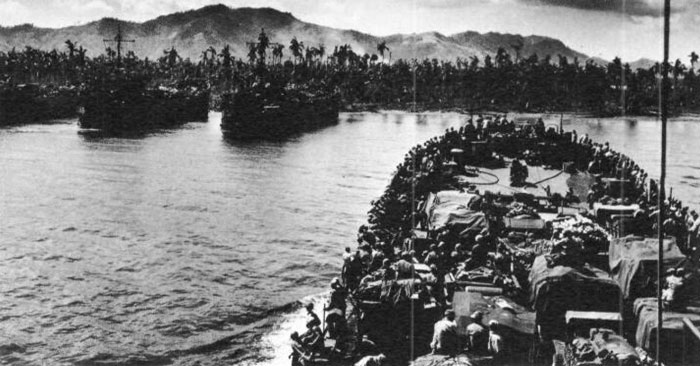 The US make landfall on Leyte.

Japanese Force A was turned back by US submarines and carrier aircraft, which then turned north in pursuit of Ozawa's force. Vice-Admiral Nishimura's Force C was almost entirely destroyed in a night battle, and Vice- Admiral Shima's Second Striking Force was turned back. Only Kurita's First Striking Force was still a factor, but it failed to capitalize on its opportunity to wreak havoc on the Seventh Fleet, and withdrew after limited success on 25 October. Meanwhile, many of Ozawa's ships, including the valuable carrier Zuikaku, last veteran of Pearl Harbor, had been sunk. Japanese desperation was manifested in the first of the suicidal Kamikaze missions, which struck an Australian cruiser on 21 October.

Lieutenant General Tomoyuki Yamashita, the 'Tiger of Malaya,' had assumed command of Philippine defense just as Leyte was being attacked. When US forces moved to invade Luzon, the principal island, in January 1945, his troops were ill prepared and poorly armed, and most of his air support had been destroyed or withdrawn to Formosa. Doubting that he could hold the beaches, Yamashita made his stand in the inland mountain areas with the object of tying up numerous American forces for as long as possible. In the event, he did not surrender until the war's end, when he still had 50,000 fighting men. By that time, most of Luzon and the other islands had been recaptured in fighting that reached its crescendo at Manila in February-March 1945.

The rocky island of Iwo Jima, although far from Japan, was part of the Japanese homeland; it offered the dual advantage to the Allies of demoralizing the enemy and providing a fighter airbase in range of Tokyo - if it could be captured. On the minus side, Iwo Jima was devoid of cover and strongly garrisoned by 22,000 troops under Major General Tadamichi Kuribayashi, who had made the eight-square-mile island impervious to aerial bombardment with a network of pillboxes, caves and tunnels.

The most prolonged and intense bombardment of the Pacific War preceded the US Marine landings of 19 February 1945. The Japanese held their fire just minutes too long, hoping to dupe the invaders into believing they would offer no resistance. By the time their weapons opened up against the beachhead, two Marine divisions and all their equipment had landed, with more to come throughout the day.

The Marines broke out and made straight for Mt Suribachi, the sugar-loaf massif at the island's tip. There they succeeded in raising the US flag after three days of combat so costly that it eclipsed even Tarawa, but the northeast of the island remained unconquered. The maze of underground defenses and lack of room to maneuver made for hand-to-hand combat of savage ferocity. Nearly 7000 US Marines and sailors lost their lives in the fighting that raged until 26 March, and the Japanese died almost to a man. Their exemplar in courage was Kuribayashi, who contacted Tokyo days after their food and water ran out with the message: 'Fighting spirit is running high. We are going to fight bravely to the last moment.' 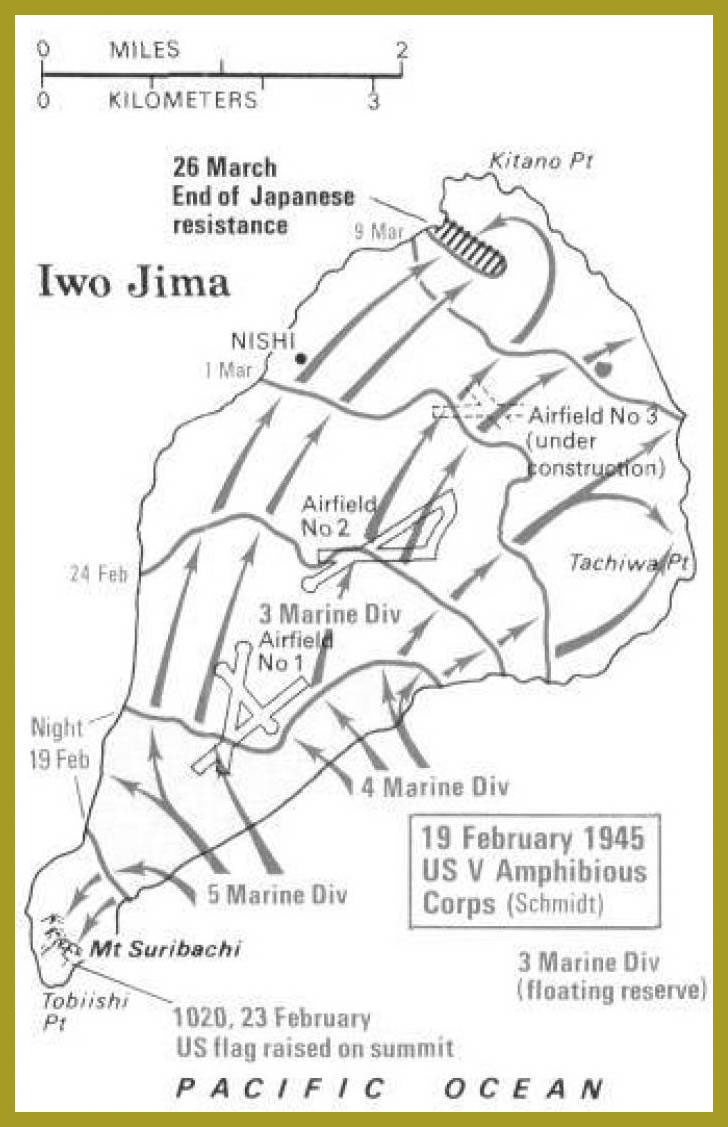 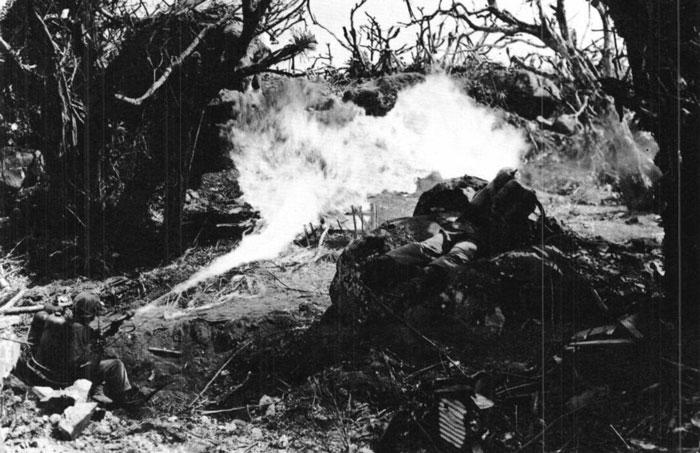 US Marines advance with flamethrowers toward Mt Suribachi.

The inexorable Allied advance toward the Japanese home islands reached Okinawa, the main island of the Ryukyu group, in March of 1945. Okinawa's capture was necessary to provide harbor and air-base facilities for the invasion of Japan. The island was defended by the Japanese Thirty-second Army - some 130,000 men - under General Mitsuru Ushijima.

Preliminary air operations were aimed at Japanese air bases on Formosa and the islands surrounding densely populated Okinawa. US and British carrier forces suffered losses to waves of Kamikaze attacks, but the Japanese paid a higher price - 90 percent of their planes were shot down before they could sacrifice themselves on the enemy's ships. From 23 March, Okinawa itself was the target of continuous air and artillery strafing.

Allied forces began to land on 1 April, when General Simon Bolivar Buckner's Tenth Army and associated forces gained a beachhead at the southern end of the island. The Japanese had established themselves behind the formidable Shuri Line, which remained almost impervious to attack until early May, when suicidal counterattacks disclosed the locations of many Japanese defensive positions. From this point on, both of the US corps involved gradually pushed forward, as Ushijima's forces retreated into the hill masses of the island's southern tip. Final resistance was overwhelmed by a massive two-pronged attack on 21 June.