Silhouetted against the early morning sky, Matildas of 7 RTR attack the Sidi Barrani perimeter on 10 December 1940. (Imperial War Museum-as are all photographs not specifically credited elsewhere) 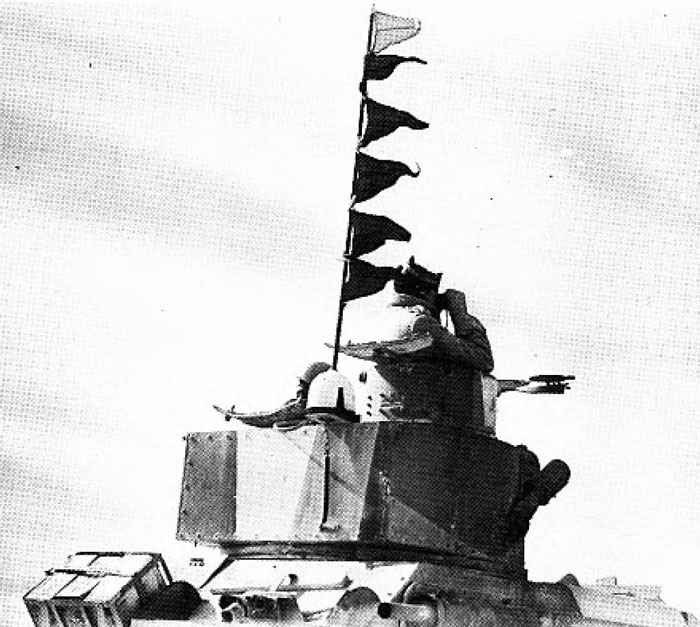 8th Hussars Mk VIB, its multiple pennants identifying a navigator's tank-see sun compass bracket. Some units preferred this method to the more conventional blue or long black flag, as being less obvious to the enemy; these pennants may be in green/black/green, with the top one in yellow unit seniority colour.

Operation 'Battleaxe' (15th-17th): British repulsed at Halfaya and Solium, but take Fort Capuzzo. In south, 7th Armd. Bde. drive towards Tobruk blunted, and weakened by mechanical problems of Cruiser tanks. British successfully disengage, withdraw into Egypt. Each side loses approx. 100 tanks, but DAK able to recover most of theirs. 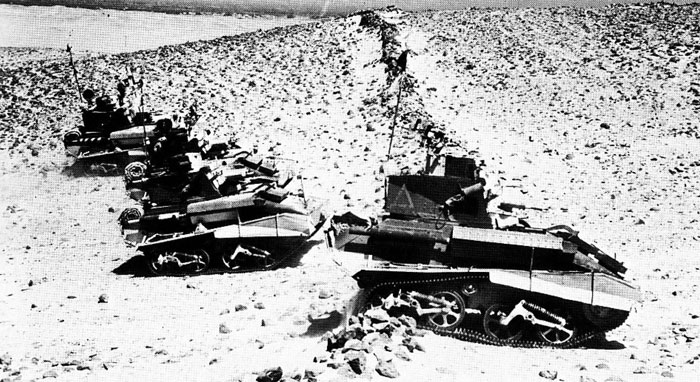 Light tanks Mks VIA and VIB photographed in August 1940. Spotlights were standard on the tanks of 1 and 6 RTR; and one tank from each squadron of the 6th was lent to 7th Hussars for a night attack on Fort Capuzzo on 29/30 June 1940, two of them using their lights to dazzle and confuse Italian gunners.

Axis garrison at Halfaya surrender (17th), 'Crusader' has cost Axis 300 tanks and British 278-but many of latter are recoverable. Reinforced, Rommel attacks anew (21st), breaking through outpost line at El Agheila, moving through Msus, and outflanking Benghazi, which falls (29th). 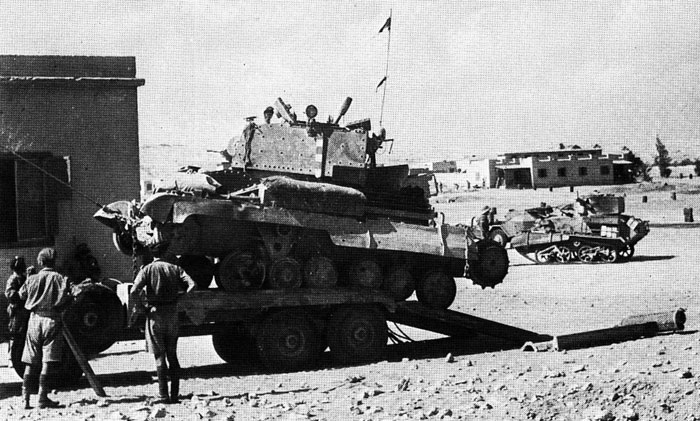 Before the arrival of the Diamond-T Transporter the recovery of untowable 'dead' tanks was more difficult. This A9 is being hauled on to a light trailer for 'back-loading'; the striped bar on the turret may identify a navigator's tank.

On the 4th, 8th Army reaches the Tunisian frontier.

It seems logical to set a period to this book at this point, the character of, and to some extent the units and tanks involved in, the Tunisian campaign being so different from the 'classic' desert period as to require a separate book. 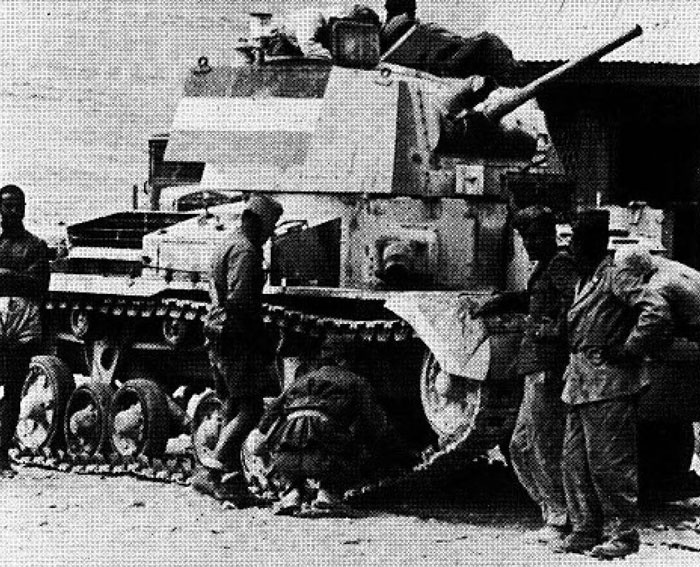 A9, believed to be in use by the Italian 63rd Tank Bn. in 1940. It may be T.3536 of 'A' Sqn., 1 RTR, abandoned on 14 September 1940 when its tracks were blown off by artillery fire, and removed by Italian forces. Later Intelligence reports suggested that the Italians were using a Cruiser to penetrate night leaguers by deception; and as late as July 1942, HQ 2nd Bn., 27th Inf. Regt., Pavia Div. was reported to have a British tank and an armoured car on strength. Whether these were all the same tank is, of course, open to conjecture; but the Italians were not in a position to capture many British tanks. (Martin Windrow)

For many Britons, particularly among the older generations, the campaign in North Africa has a nostalgic appeal, and indeed a glamour, which has never been associated with the fighting in Italy, North-West Europe and Burma. The reasons are largely emotional but entirely understandable, as for three years it constituted the only lasting contact between the British and Commonwealth armies and those of the Axis powers. Again, there is a long British tradition of wars fought successfully in the remoter areas of the globe and, however many setbacks might be encountered along the way, this was accompanied by a justified national confidence in eventual victory.

As the years have passed so too have generalisations about the campaign multiplied; and although such generalisations may contain a core of truth, they do bear examination. Most commonly heard among detractors is the complaint that Britain was forced to deploy a high percentage of her available strength in the area, whereas Germany employed only a handful of divisions. This fails to take into account the fact that the Commander-in-Chief Middle East was also required to mount simultaneous operations over a vast area including Persia, Iraq, Syria, Eritrea, Ethiopia and Somaliland; and that on two occasions, when victory seemed to be within his grasp, he was forced to send very substantial reinforcements to other theatres. Thus, having utterly routed the Italian army at Beda Fomm in February 1941, Wavell was immediately required to send troops to Greece; while in December of that year, with Rommel still retiring from the 'Crusader battlefield, Auchinleck was ordered to strip his command of some of his best formations and send them to counter the Japanese offensive in the Far East. Neither does this view admit that in spite of committing most of her strength to this theatre as well, Italy was virtually knocked out of the Axis alliance; nor the fact that had Germany employed more good-quality troops, and above all kept them properly supplied, she might have produced a result more favourable to herself - as it was, OKW favoured a limited involvement which tied down numerous British divisions in defence of the Middle East's vital oil-producing areas when they would otherwise have been preparing for a return to the mainland of Europe.

Many, too, hold the attractive but simplistic view that an immediate advance on Tripoli after the victory of Beda Fomm would have ended the campaign in early 1941. Wavell had destroyed the Italian field army and turned Cyrenaica into a buffer zone; in view of the urgent orders to reinforce Greece, Tripoli was an irrelevance. While Gen. O'Connor believed that captured stores would have enabled him to reach Tripoli, there seemed at the time no reason for such a march. Few could have foreseen the outcome of Rommel's first bold probing attack, described by Haider, Chief of the German General Staff, as the action of 'a dangerous lunatic'.

Although the British Army had, over the years, acquired as much desert experience as any other, the fact remained that in 1940 no one had fought a fully mechanised desert campaign, and few knew what to expect. That the British were initially better prepared than the Italians is a tribute to the demanding exercises instituted by Maj. Gen. Percy Hobart, commander in 1939 of the Mobile Division Egypt - later, 7th Armoured Division. As the Italians became more mechanised they too learned to operate in the desert ; and the Germans adapted to it very quickly. Apart from such special units as the Long Range Desert Group, there was in the end little to choose between the desert-craft of the different armies. There was, however, one important flaw in the British philosophy, which cursed the conduct of armoured operations for fully a year.