The FARK's poor state of readiness became apparent in the mid-1960s when the joint threat from Khmer Communist insurgents and right wing Khmer Serei forces presented the first major challenges to the Cambodian government since the First Indochina War. An even bigger threat was posed by the NVA/VC forces in eastern Cambodia, the target of a restrained FARK sweeping operation in November 1969. Against these, the FARK fielded in January 1970 some 53 battalions and 11 regional companies. Slightly over half of the battalions were designated Bataillons d'Infanterie; the remainder were Bataillons de Chasseurs, or light infantry battalions. Three formations - the paratroopers, Phnom Penh Garrison, and Royal Guard - were organised into half-brigades. Antiaircraft, artillery, engineer, and transport groups also formed half-brigades, while armoured units were split into an independent battalion at Kompong Cham and a regiment at Sre Khlong. All other battalions acted independently while assigned either to the General Reserve or Military Regions. 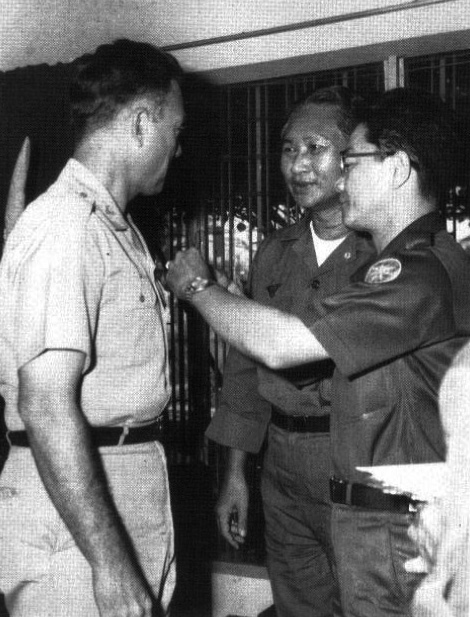 By March 1970 the confrontation between head of state Norodom Sihanouk and the supporters of Gen. Lon Nol gave rise to rumours of an impending coup against Sihanouk. Anti-Communist Khmer Serei rebel forces in contact with disgruntled senior members of the FARK were aware of this situation, and had infiltrated close to the capital. Three Khmer Serei battalions from the Dongrek Mountains, one ethnic Khmer battalion from the ARVN 25th Division, and Khmer Krom elements from the Tien Bien 'Mike Force' camp in South Vietnam were near the outskirts of Phnom Penh when Gen. Lon Nol assumed power on 17 March.

Immediately following the ousting of Sihanouk, the rechristened Forces Armées Nationales Khmere faced opposition from vastly superior NVA forces. Under strength and poorly equipped, the army mounted an immediate recruitment drive. By June, 18 General Reserve infantry brigades had been created; however, only 12 brigades were properly manned, the rest remaining only on paper.

One of two AC-47 gunships on the eve of its delivery to the Khmer Republic, June 1971. A double and a single .50 cal. MG mount can be seen in the windows immediately forward of the door. (Courtesy Doug Blair)

Several programmes were quickly implemented to help the FANK reach its July 1970 authorised troop strength of 206,000 men. Khmer Serei forces previously operating in the Dongrek Mountains were retrained in Thailand and used as the core of a Special Brigade in Siem Reap. This brigade was later expanded into the highly-rated 9th Brigade Group. Eight Khmer Krom battalions from the South Vietnamese irregular forces were also sent to Phnom Penh. In addition, the 1st FANK Shock Brigade, evacuated to South Vietnam after its garrison in Ratanakiri province fell, was re- equipped and airlifted back to Cambodia. A more regimented FANK training programme began in 1971 in South Vietnam.

As it expanded rapidly the FANK became divided into a confusing array of French and US combat organisations. The largest was the brigade group, normally composed of two brigades. Other formations included half-brigades, autonomous regiments, independent brigades, groups, and territorial battalions. In addition, a paramilitary Gendarmerie was formed to extend the government presence across the countryside. In early 1972 the FANK continued to employ the brigade group as its largest combat organisation. Of the 15 brigade groups fielded in January 1972, however, only three were rated as being militarily effective; three were still in South Vietnam training; and nine were considered to be only marginally reliable. In April 1972 the FANK subdivided its forces further by splitting its General Reserve into three groups: Forces A were attached to a military zone for operations; Forces B, numbering five brigades, were designated as the General Staff Reserve; Forces C, totalling two airborne battalions, were Lon Nol's reserve.

Denied further Khmer Krom recruits, the FANK focused on developing its own indigenous training facilities. The Officer Candidate School, cut from a three-year to a six-month course, was moved from Phnom Penh to Longvek. Infantry training centres at Kandal and Kompong Speu were opened; construction of similar centres at Ream, Sisophon and Longvek was started. In addition, a Recondo School run by the Khmer Special Forces was opened in 1972 in Battambang.

The FANK also began expanding its village defence programmes. In July 1972 Auto-Defence units were planned for each Military Region. A more ambitious project known as the Liberation and Nation-Building Directorate was formed in November, and the first Auto-Defence pilot programme of the LNB was formed in Siem Reap during the same month. Operating closely with the LNB Directorate, a Political Warfare Directorate within the General Stall was created, along with a Political Warfare Brigade.

To streamline the mass of combat formations within the FANK, a major reorganisation was implemented in December 1972. By the following month, all brigade group headquarters, 17 regimental headquarters, 16 brigade headquarters, and 13 battalions had been dissolved. In their place, 32 brigades, 202 infantry battalions, and 405 territorial infantry companies were formed. Of these, 128 battalions were grouped into the 32 brigades. Twenty of the brigades would remain independent, with 12 being distributed among four new FANK divisions. A fifth, the understrength 9th Guards Division, was raised in April 1974 by the highly political and militarily incompetent Gen. 1th Suong.

The reorganised FANK was soon plagued with difficulties. On 28 January 1973 all South Vietnamese training concluded in conjunction with the Paris Peace Accords, depriving Cambodia of vital training assistance. Two months later the 1st Parachute Brigade, long considered one of the best FANK units, abandoned positions along the southern Mekong when their operation extended beyond the promised conclusion date. Several other brigades followed the example of the paras, leading to several unnecessary government reversals. To make matters worse, US air support - used excessively by the FANK was revoked in August. During the same month seven Nationalist Chinese instructors on loan to the FANK Artillery School were withdrawn. 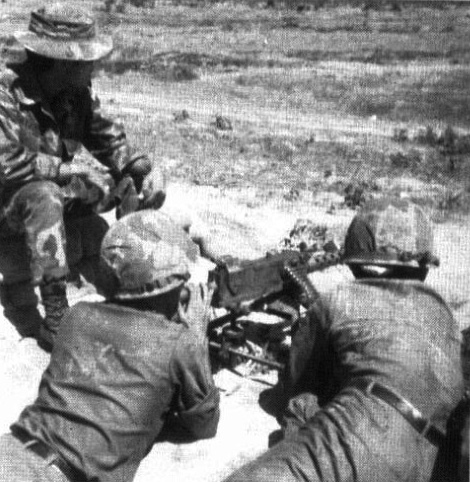 Despite these setbacks, the resilient optimism of the Cambodian soldier resulted in several brilliant performances in 1974. One of the most famous took place 14 kilometres north-east of the capital on the morning of 10 November, when an estimated two Khmer Communist regiments stormed a government outpost. The initial attack was repulsed, but two company-sized positions were overrun the following day. Rushing in the 128th Infantry- Battalion, the 2nd Para Battalion, and 4th Para Battalion, the FANK garrison withstood continuous pressure for 13 days. All enemy attacks were defeated, and the two lost positions were retaken by 27 November.

By early 1975 the FANK was exhausted. Medical resources were reaching the breaking point, and foreign military aid, already preciously low, was cut in early April. On 17 April, the FANK offered its surrender to the Khmer Communist forces. 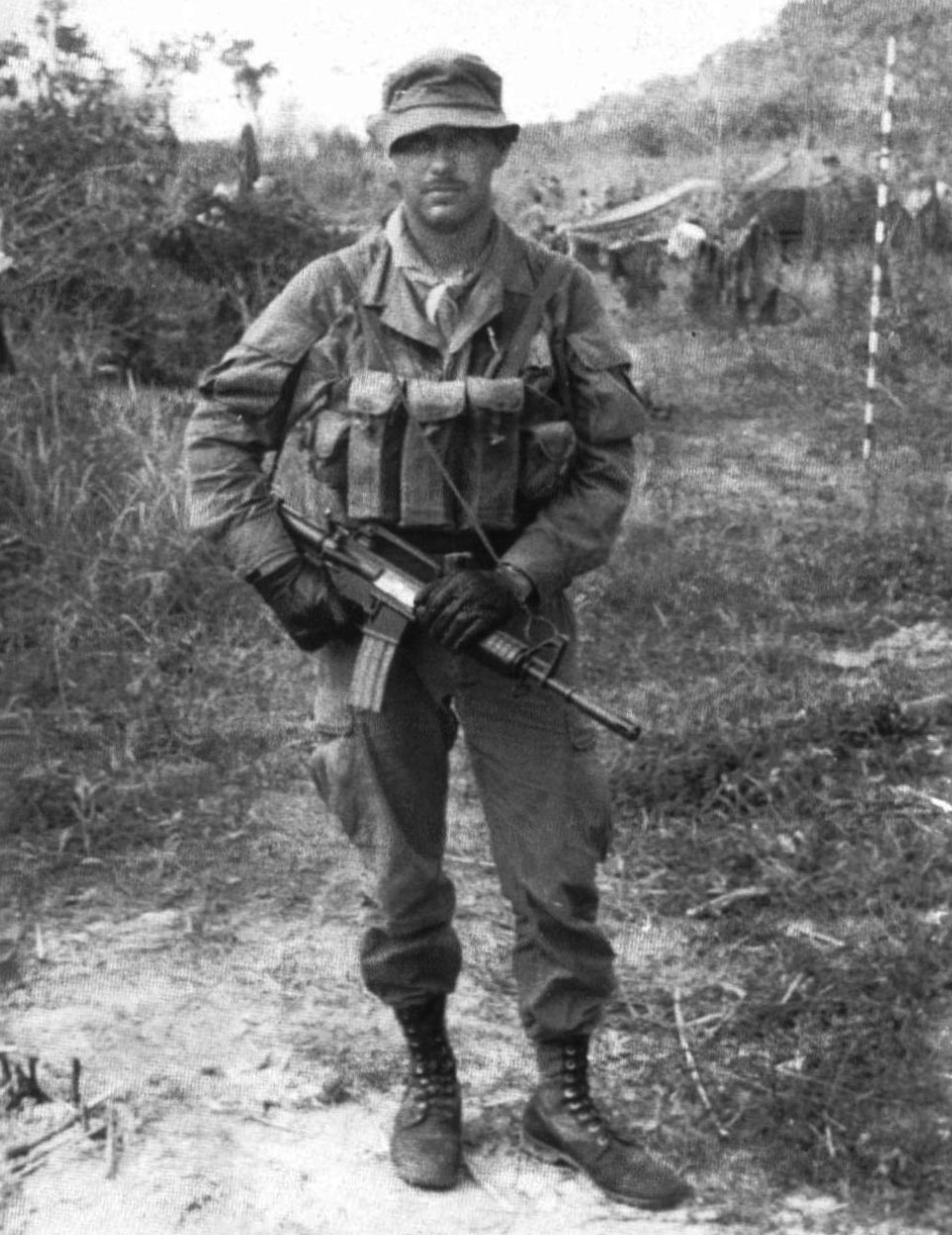 US Army Special Forces adviser from the UITG training base at Long Hai, South Vietnam. He wears a ChiCiom AK-47 chest pouch rig and an NVA bush hat. US jungle fatigues have been altered by moving the lower shirt pockets on to the upper sleeves. The weapon is a CAR-15 with modified assault sling.

The Khmer Republic raised several unconventional warfare units during its brief five-year existence. The largest was the Khmer Special Forces, organised in October 1971 under the command of Lt. Col. Thach Reng. Khmer Special Forces teams were sent for training at the Royal Thai Army Special Warfare Centre at Lopburi, Thailand, under Operation 'Freedom Runner'. Additional training was conducted in South Vietnam and the United States. An indigenous Special Forces training centre was also being planned shortly before the country fell.

The missions of the Khmer Special Forces ranged from strategic and tactical reconnaissance to raids, pathfinding, and providing instructors for the FANK Recondo School in Battambang. In a true special forces role, they also raised village militias behind enemy lines. One of their most famous missions was performed by two A Detachments during the siege at Kompong Cham in September 1973. Spearheading the government assault on the Communist-held southern quarter of the city, the teams were inserted by helicopter and used LAW rockets to neutralise an insurgent stronghold, allowing the FANK to rush in amphibious reinforcements without taking excessive casualties. Despite this success, the Special Forces remained too small to make a strategic difference. In addition, many of the regional commanders misused them as conventional shock troops, and a large portion of the Special Forces remained in Phnom Penh as a deterrent against coup attempts. By April 1975 the Special Forces were massed in Phnom Penh, and planned a breakout to the south-east toward the South Vietnamese border. They never made it, and were presumed killed in action.

Three other special operations units were under the tacit control of the Khmer Special Forces. The first consisted of repatriated elements of the MACV Studies and Observation Group 'Cedar Walk' programme. 'Cedar Walk' teams were composed of unilaterally controlled Cambodian operatives used against the NVA border sanctuaries in Cambodia. Two contingents were turned over to the Special Forces in October 1971, but political manoeuvring left them in the hands of the SEDOC, Cambodia's intelligence service. A second unit was composed of Khmer nationals trained in Laos under Project 'Copper' and stationed at Khong Island on the Mekong River. From Khong Island they were heliborne into the Communist-controlled provinces of north-eastern Cambodia, and used as recon teams along the Ho Chi Minh Trail. A third unconventional warfare unit was trained in Indonesia during 1972. Half of the returnees went to a FANK infantry brigade; the other half were used later in the war as the cadre for a Para- Commando Battalion.

In mid-1973 the Khmer Navy raised its own special warfare unit, the Cambodian SEALs. Modelled on their US counterparts, an initial group of SEAL recruits was drawn from an existing Combat Swimmer unit and sent to the United States and the Philippines for basic training. At its peak in mid-1974 the unit fielded three teams totalling 90 commandos. Airborne training was conducted at Pochentong, while the Olympic pool in Phnom Penh was used for diving courses. The SEALs provided valuable intelligence for the MNK while acting as reconnaissance teams along the banks of the Mekong. They were also used as shock troops during the sieges at Kompong Cham and Oudong. They defended the naval base opposite Phnom Penh until the final day of the war. 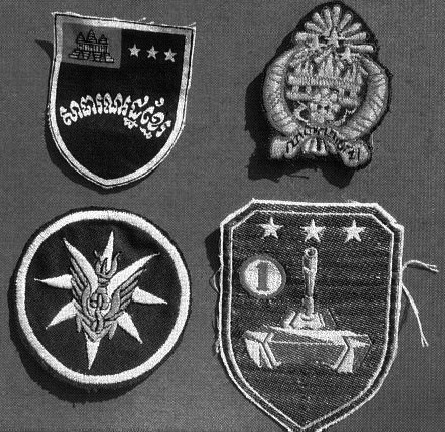