The Course of the War

In 1953 the French granted Cambodia full independence, allowing the youthful Khmer King Xorodom Sihanouk to lead the first post-French colonial sovereign government in Indochina. For ten years Sihanouk (who abdicated the throne in 1955, but retained political leadership) attempted to follow a non-aligned foreign policy, steering Cambodia along a neutralist tightrope which would keep it from being dragged into the wars in neighbouring Laos and South Vietnam. In November 1963, however, Sihanouk stated that US economic and military aid would be renounced as of January 1964. A break in diplomatic relations followed, and Cambodia's foreign policy began to lean toward the left.

From 1964 until 1966 Sihanouk showed increasing accommodation toward the North Vietnamese and Viet Cong. In March 1965, he hosted the Indochinese People's Conference, attended by Pathet Lao and Viet Cong representatives, which concluded with a general condemnation of the US presence in South-East Asia. At the same time, Chinese, Soviet, and Czechoslovakian military aid began to filter into the country. The Chinese even promised to support a 49,000-man Forces Armées Royales Khmere - FARK - 19,000 more troops than the country then boasted. 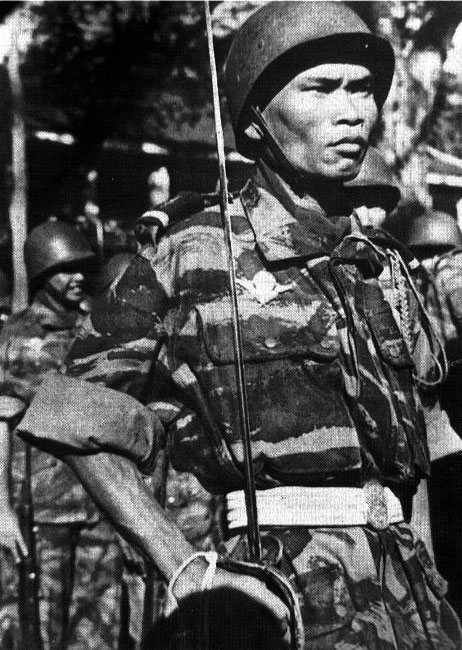 A FARK captain from the 1 Bataillon de Parachutistes, 1960. He wears French parachute wings on a French 1951 camouflaged jump-smock, and a US helmet liner. The belt buckle bears the royal coat of arms in gold. Ceremonial swords were presented to graduating members of the Ecole Militaire Khmere.

Three years after his move to the left, the mercurial Sihanouk shifted again. A new conservative National Assembly took office, prompting an alarmed Cambodian Communist Party to launch its first major attacks against government outposts in April 1967. Sihanouk sent paratroopers to quell the revolt, but the surviving Communists - now armed with stolen weapons - were able to escape into the countryside to being organising a wider insurgency. This became the beginning of what Sihanouk called the Khmer Rouge (Red Cambodian) guerrilla forces.

Five months later, after a crisis in relations with China, Sihanouk agreed to greater North Vietnamese use of the Cambodian port of Sihanoukville for shipping supplies to base areas along the South Vietnamese border. (It was later determined that, at its peak, Sihanoukville handled 80 per cent of North Vietnamese supplies destined for the war in South Vietnam.) At the same time he publicly announced that the Vietnamese presence on Cambodian territory was not sanctioned by the Phnom Penh government. He also hinted that he would not be opposed to US forces entering Cambodia in 'hot pusuit' of Communist units. This right of pursuit, with Sihanouk's approval, was later extended to B-52 strikes on North Vietnamese Army (NVA) base areas. 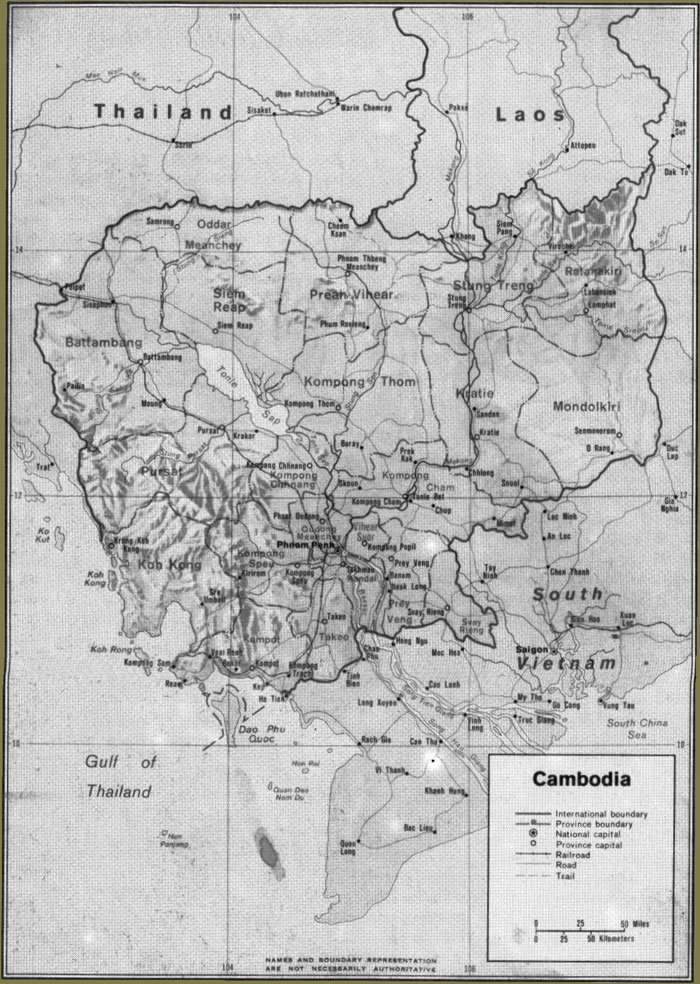 In his attempt to appease all sides while maintaining a facade of neutrality, Sihanouk was alienating important segments of the country. The FARK, in particular, were frustrated by their inability to counter the extensive Vietnamese presence in the eastern border region. They were also unimpressed with the small amounts of Communist aid delivered since US military assistance was cut in 1964.

With domestic opposition in Phnom Penh growing increasingly vocal, Sihanouk left in early 1970 for a state visit to China and the Soviet Union. During his absence the National Assembly unanimously voted him out of office on 18 March 1970. He was replaced by the commander of the FARK, Gen. Lon Nol, who immediately began to set a new course for the country. The Kingdom of Cambodia became a pro-Western Republic, the Communist Vietnamese were ordered to leave Cambodian territory, and an open appeal was made to the West for assistance in bolstering the newly rechristened Forces Armées Rationales Khmere - (FANK).

Within days of the change in government, the FANK went into action against the NVA. Massing elements of its airborne, armour, and artillery forces, the FANK drove toward the town of Baret, 90 miles south-east of Phnom Penh. Fighting raged for a week, after which the outnumbered and outclassed FANK were forced to withdraw from the border area. At the same time, the Army of the Republic of Vietnam (ARVN) and US forces launched a full-scale assault on NVA sanctuaries in Cambodia. The ARVN went on to conduct several major ground operations against NVA concentrations in Cambodia over the following years. 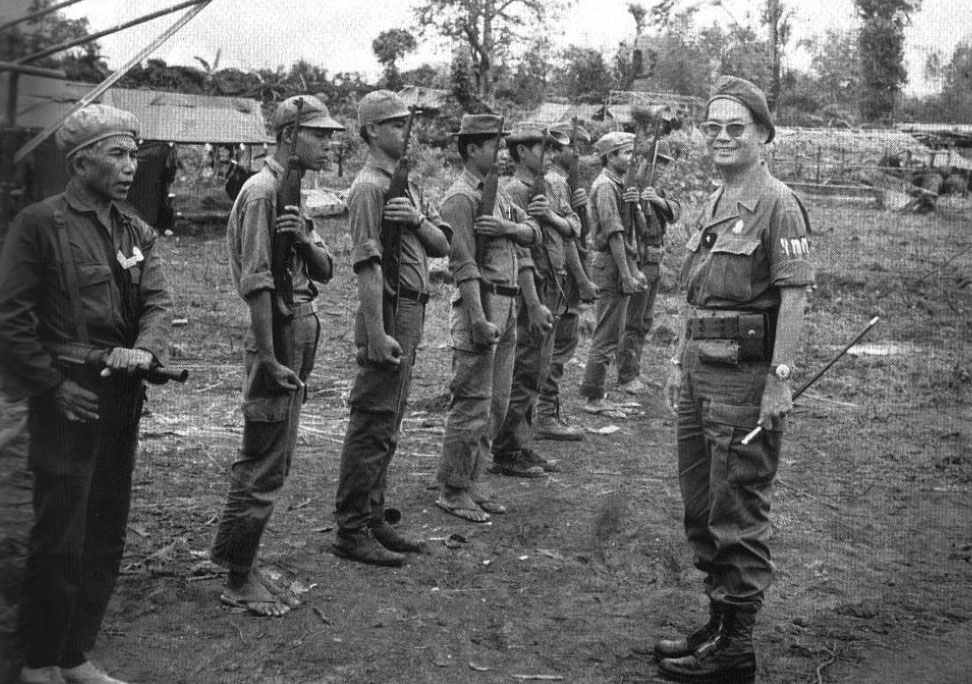 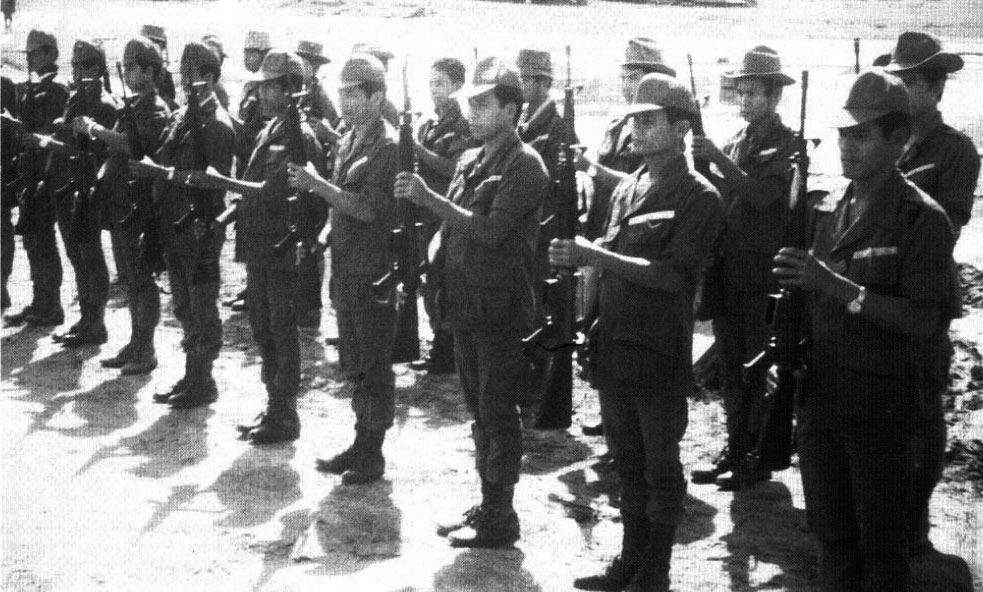 A Khmer Krom platoon, newly arrived from South Vietnam with their US-style jungle fatigues and Mi6s, parade at Tonle Bet in November 1970. Blue-over-yellow or blue-over-white tabs are worn slanting on the left breast as unit identification; the man at front right has blue and yellow tassels on his Mi6; the NCO at front, second from right, wears one gold over two red/yellow mixed chevrons. (Courtesy Col. Harry Amos)

Soon after the FANK suffered its first setbacks at the hands of the NVA, the United States began a military aid programme to the Khmer Republic. On 22 April 1970, thousands of captured Communist rifles were sent to Phnom Penh. In May the US also assembled 2,000 Khmer Krom soldiers and airlifted them to Cambodia. (The Khmer Krom, a term used to designate ethnic Khmer living in South Vietnam, had fought for years in units under the control of the US Army Special Forces.) By the end of 1970 eight Khmer Krom battalions were deployed in Cambodia.

Other Free World forces offered assistance to the Khmer Republic, including the Republic of China, South Korea, Indonesia, and Thailand. In July 1970 2,000 FANK soldiers went for 16 weeks of military training in Thailand. The Thais also agreed to train 2,500 ethnic Khmer volunteers living in Thailand; this programme was later halted because of funding problems.

With assistance from the USA, Phnom Penh began to expand and reorganise the FANK. In July - in the midst of reorganising - the FANK had its first taste of heavy fighting. Reacting to a lull in enemy activity, the FANK attempted to use the opportunity to raise the morale of its troops by retaking large expanses of rich rice-growing areas not under government control. The plan, launched in late August, was named Operation 'Chenla'. Ten infantry battalions supported by armour and artillery, converged on Route 6 to sweep away the enemy forces along the highway and recapture the rice paddies around Kompong Thorn. Although 15 miles of Route 6 were opened for a short time, the NVA 9th Division hit back hard and threw the FANK on to the defensive for most of the operation. Only some of 'Chenla' objectives were achieved, and at the expense of sacrificing some of the best Khmer Krom battalions.

As 'Chenla' was drawing to a close, the year 1971 opened with a dramatic demonstration of a new Communist strategy designed to keep the Republic off balance by striking deep into the heart of government population centres. On the night of 21 January 1971 100 Communist Vietnamese commandos mounted a sapper attack on Pochentong Airbase outside Phnom Penh. Almost the entire Khmer Air Force was destroyed on the ground. Coinciding with this attack, other Communist units hit the capital's naval base and other villages in the vicinity of Phnom Penh. The strikes had the desired effect of forcing the FANK to recall some of the 'Chenla' task force to reinforce the capital. From that time forward the FANK General Headquarters focused on consolidating its hold over the major population centres, leaving the countryside open to Khmer Rouge recruiting drives.

Following the Pochentong attack President Lon Nol suffered a stroke. When he returned to office in April 1971 preparations were made for a second, more ambitious offensive to open all of Route 6 and to secure the road between Kompong Cham and the isolated garrison at Kompong Thom. The operation, codenamed 'Chenla Two', relied heavily on air power to soften up an estimated two NVA divisions in the region. 'Chenla Two' was launched on 20 August 1971, catching the NVA by surprise and succeeding in opening the entire highway in just over two weeks. Consolidation efforts continued until 25 October, when 'Chenla Two' was officially concluded. Celebrations had hardly started when the 9th NVA Division, reinforced by the 205th and 207th Regional Regiments, cut off and systematically eliminated the FANK task force. By early December, ten government battalions plus another ten battalions-worth of equipment had been lost.

The FANK, now with many of its finest units destroyed, launched two small operations at the beginning of 1972. The first, Operation 'Angkor Chey', was an attempt to clear enemy forces from the revered Angkor Wat temple complex. The second, Operation 'Prek Ta', was planned in conjunction with ARVN units south of Route 1. Neither initiative succeeded, and the FANK was forced to pull back to Phnom Penh once again.

In March 1972 a lull in Communist activity ended when the enemy began heavy attacks Prey Veng City and Neak Luong. ARVN troops crossed the border to engage the NVA 1st Division in the region, confronting the North Vietnamese in three major ground assaults around Kompong Trach. At the same time, Khmer insurgents hit the capital with a devastating rocket attack: 200 rounds of 122mm rocket and 75mm recoilless rifle fire struck, killing over a hundred people. A second round of shelling and sapper attacks hit Phnom Penh in May, killing 28 people inside the city. In response, the FANK launched several sweeps around the capital, temporarily silencing the elusive rocket teams.

Not allowing the FANK to pin them down, the Khmer Communists shifted their attack and began a sabotage campaign against shipping along the Mekong. On 23 March two cargo vessels were hit by sappers near Phnom Penh. That same week, floating mines destroyed two POL barges. Government garrisons along the Mekong River were also hit. Reacting to the newest threat, the FANK combined with the ARVN in July to clear the enemy from the Mekong corridor. Strong NVA forces in the region intervened, using tanks and SAM-7 anti-aircraft missiles for the first time in Cambodia. With heavy air support, the combined task force captured the town of Kompong Trabeck in August. The garrison was turned over to the FANK, only to be lost permanently in September after renewed fighting. 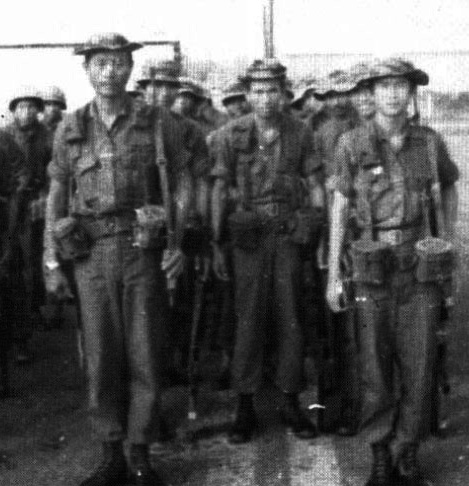 For the remainder of 1972 the Communist forces harassed government lines of communication, impeding the flow of supplies to Phnom Penh and causing a minor rice riot in the capital. Supply traffic along the Mekong River, the Republic's major lifeline, was also attacked by Communist frogmen. 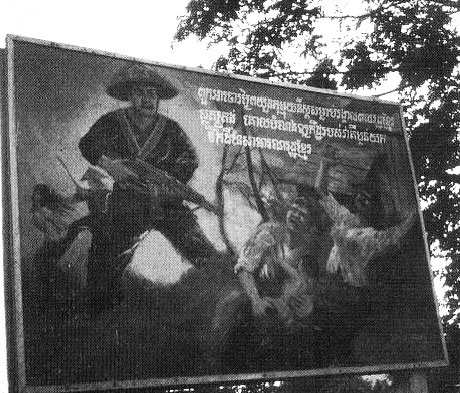 In January 1973 the insurgents ignored a Republican ceasefire, launching their dry season offensive during the same month. By March the situation was growing critical as enemy attacks struck north of Phnom Penh and along the Mekong corridor. After six months the enemy offensive shifted to a more direct assault on Phnom Penh. The government reacted with massive air support, inflicting tremendous casualties on the Communist forces during August.

As the lighting around Phnom Penh began to subside, a second Communist front was opened against the provincial capital of Kompong Cham. Insurgents stormed Kompong Cham in August and occupied half of the city, capturing the hospital and brutally massacring its patients. At the same time, US air power was withdrawn from Cambodia on 15 August, throwing the defence of Kompong Cham completely into the hands of the Cambodian armed forces. By means of a naval armada, reinforcements from the infantry, marines, paratroopers, and Special Forces were lifted to government positions across the Mekong from the besieged city. On 10 September an amphibious assault was made into the Communist-held quarter of Kompong Cham, overwhelming the insurgents and regaining full control of the city after a month of fighting.