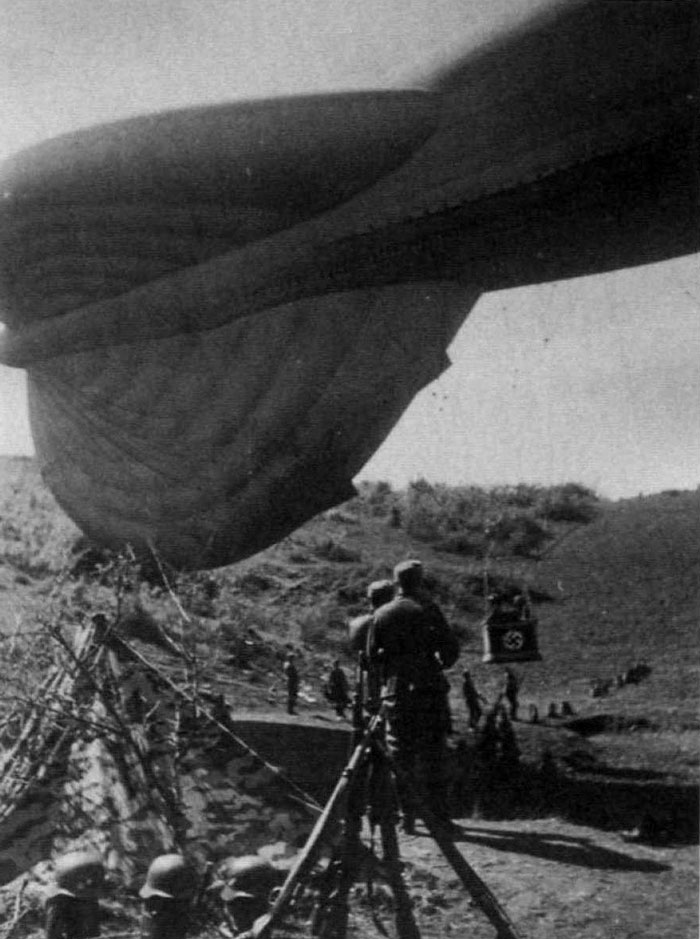 One of the most effective forms of observation, apart from flying, was to use an observation balloon. Here, in these two photographs, taken in sequence, is an artillery observation battery utilising a balloon in a remote area. With almost non¬existence of enemy aircraft, balloon observation could be undertaken with little concern. However, it was still vulnerable to attack as the balloon was hydrogen-filled. Two men can be seen inside the balloon basket, one to record data and relay it to the ground by telephone. The other man was the observer who would keep a lookout for the approach of any enemy aircraft. 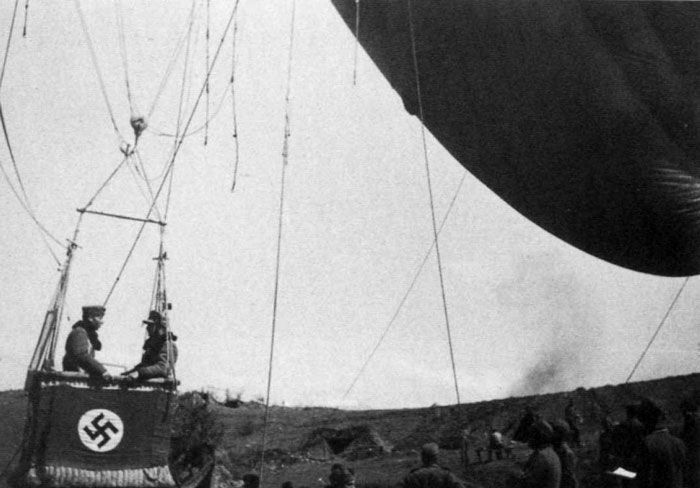 Commanders are seen on a mountain slope consulting their notebooks as they report the progress of the advance to the Gebirgs-Division commander, on the right wearing an officers greatcoat. 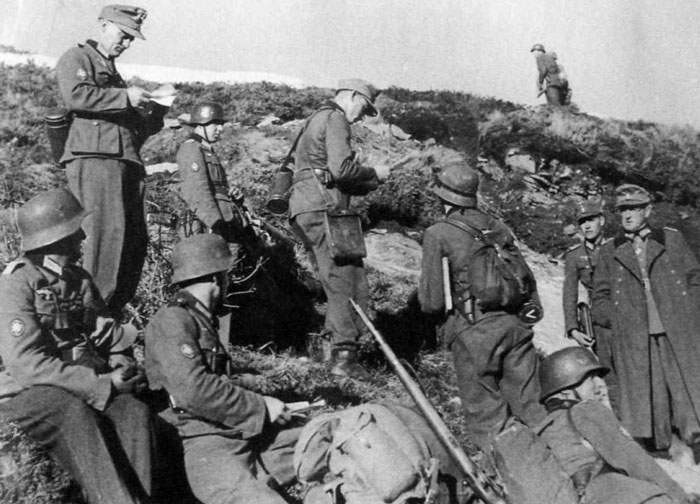 A rifle group pause in their advance and have a break in a forest during the early phase of operations against Greece. The standard Gebirgstruppen equipment can be seen, comprising of the two, three-pocket cartridge pouches, for the 7.9mm carbine bolt action rifle, bread bag, canteen or field flask and drink cup, mess kit or cook pot, small entrenching tool and carrier, the S84/98 bayonet, M35 steel helmet, and gas mask canister. 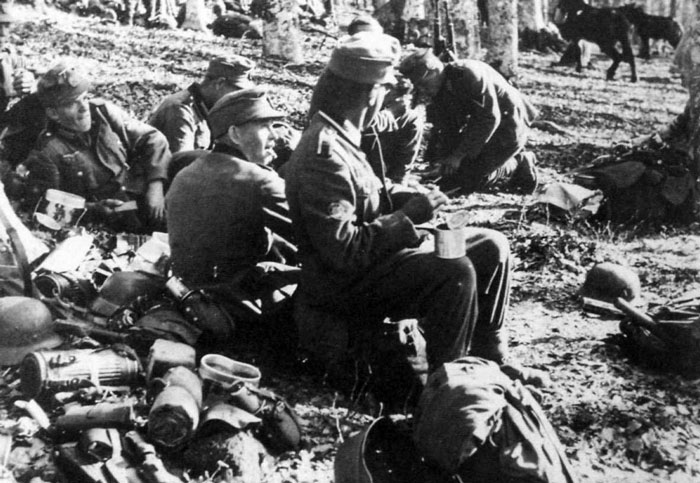 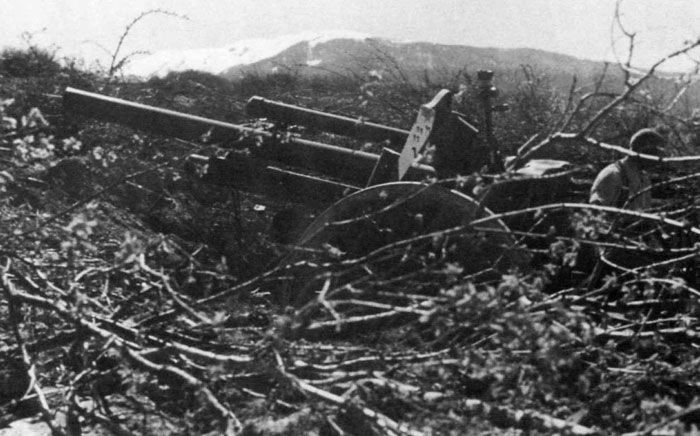 A Gebirgs artillery unit during a pause in action along the Yugoslav and Greek frontier, in April 1941. The artillery piece is a 10.5cm le.FH. 18 light field howitzer. The gun is well concealed in undergrowth. 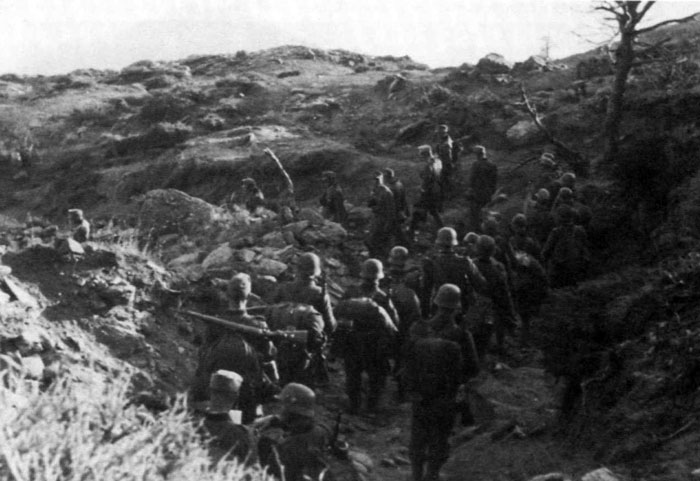 Gebirgstruppen traverse across typical mountain terrain as they pass from the Yugoslav frontier into Greece. Much of the advance was often slow due to the winding roads and uneven, rugged terrain. The troops found the advance frustrating at times and this was made worse by enemy resistance, which could regularly hold up entire units for hours fighting on the slopes. 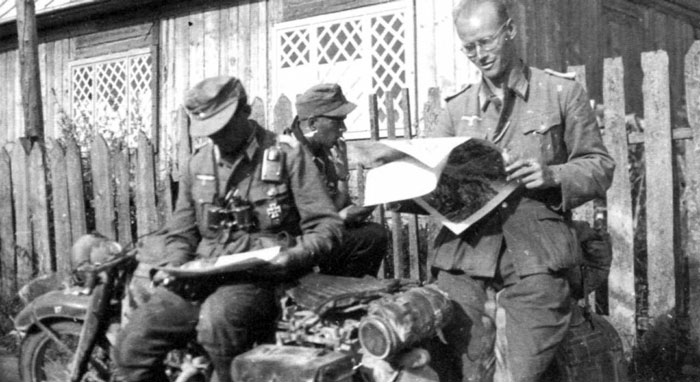 Gebirgstruppen of the 1.Gebirgs-Division have halted in a village and read their divisional weekly newspaper. The officer seated on the motorcycle combination has been decorated with the Iron Cross 2nd Class and the ribbon of the Iron Cross 1st Class. 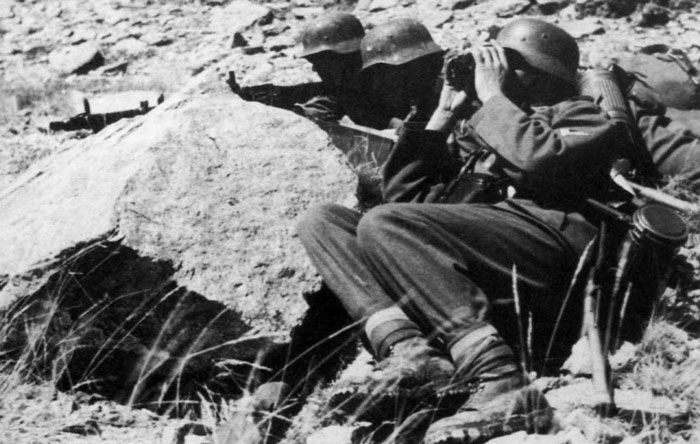 A Gebirgs machine gun squad use the rocky terrain as cover on the mountain slope. The light 7.92mm MG34 machine gun is on its bipod. The squad is relatively concealed, and their uniforms blend-in well with the local terrain. A light machine-gun troop consisted of a machine gunner (Number 1) and two machine gun riflemen (Numbers 2 and 3) to carry ammunition. 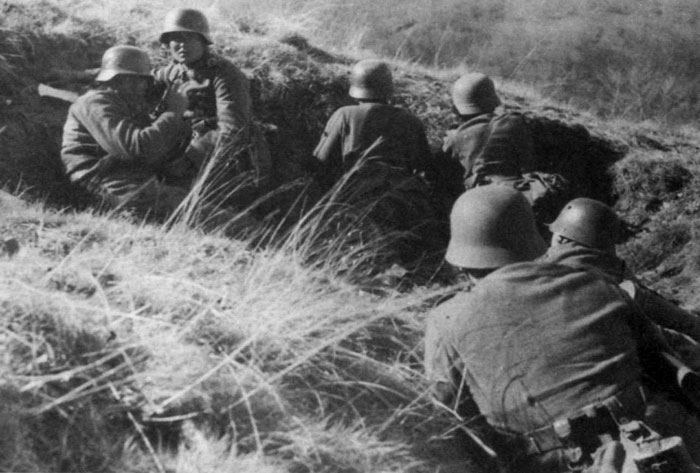 Mountain troops take cover on a grassy mountain slope and use the uneven ground as cover. Positions like this often gave troops good fields of observation and fire, and could dominate an enemy on the higher ground. 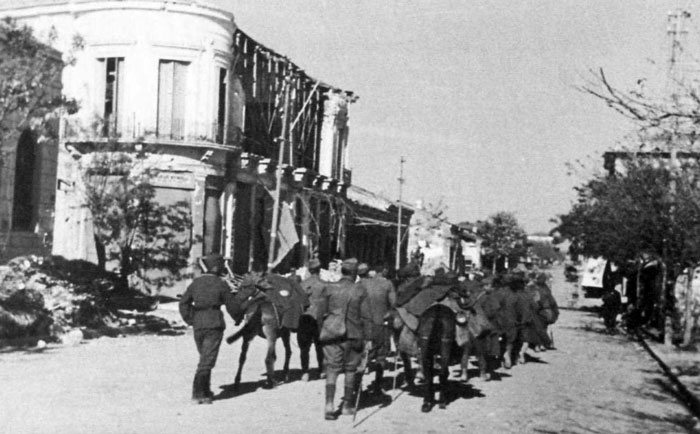 A column of Gebirgsgruppen march through a destroyed Greek town, accompanied by pack animals carrying equipment. Both the 5 and 6.Gebirgs-Division took part in the attack against Greece. Fighting was heavy in a number of areas but slowly and systematically the mountain troops fought their way through and were able to overrun the Greek defences. 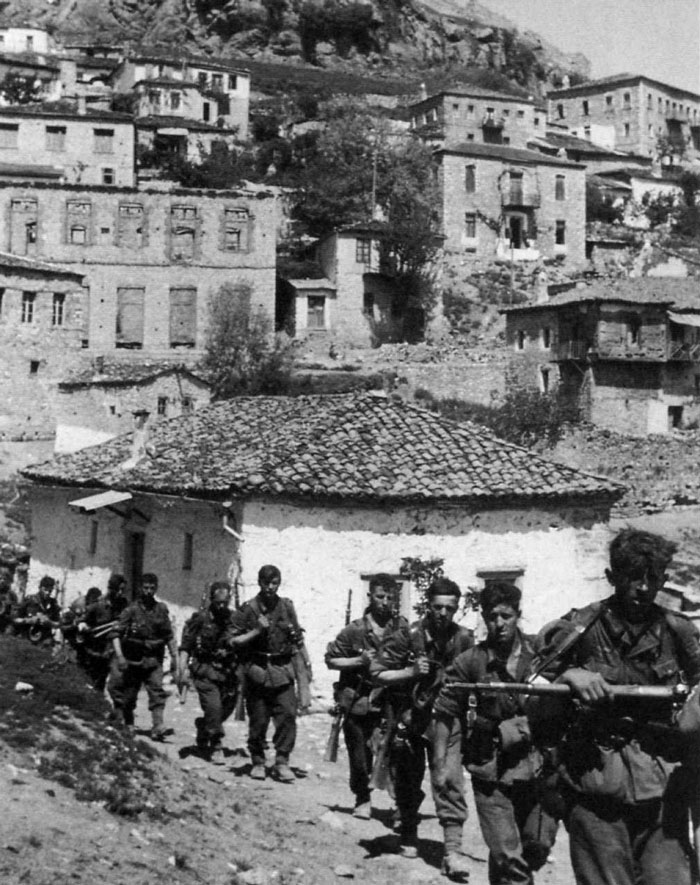 Gebirsjäger staff cars have halted somewhere in the Balkans. Three staff officers can be seen conversing whilst watching their unit crossing a wooden bridge. These vehicles were very much ill-suited for uneven terrain and were seldom seen off-road driving. 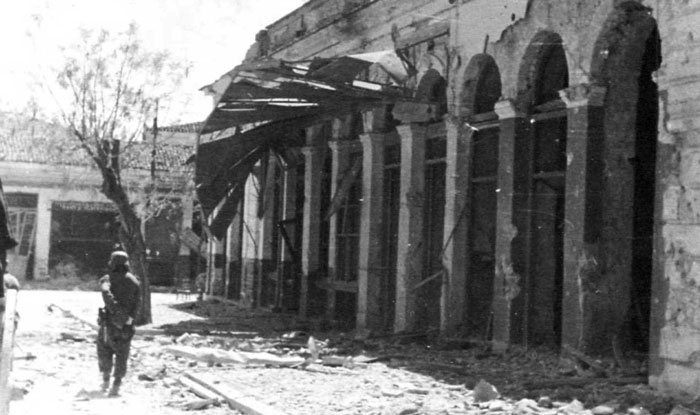 Two photographs showing a mountain trooper and a mountain motorcycle combination moving through a destroyed captured town. These Gebirgs are more than likely part of a mountain reconnaissance battalion that comprised of a battalion staff, motorcycle company, and heavy company. 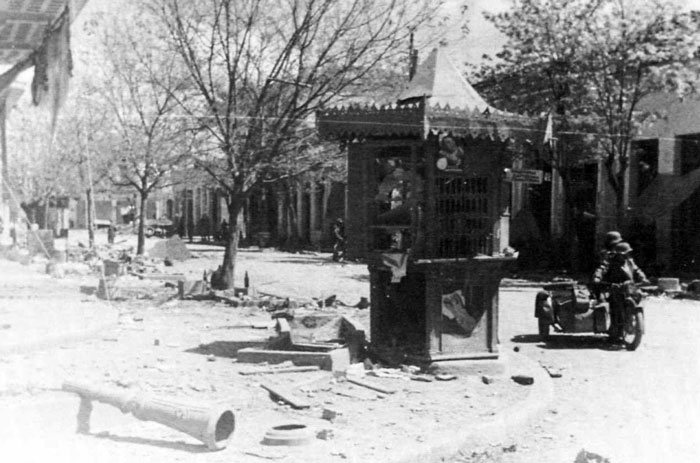 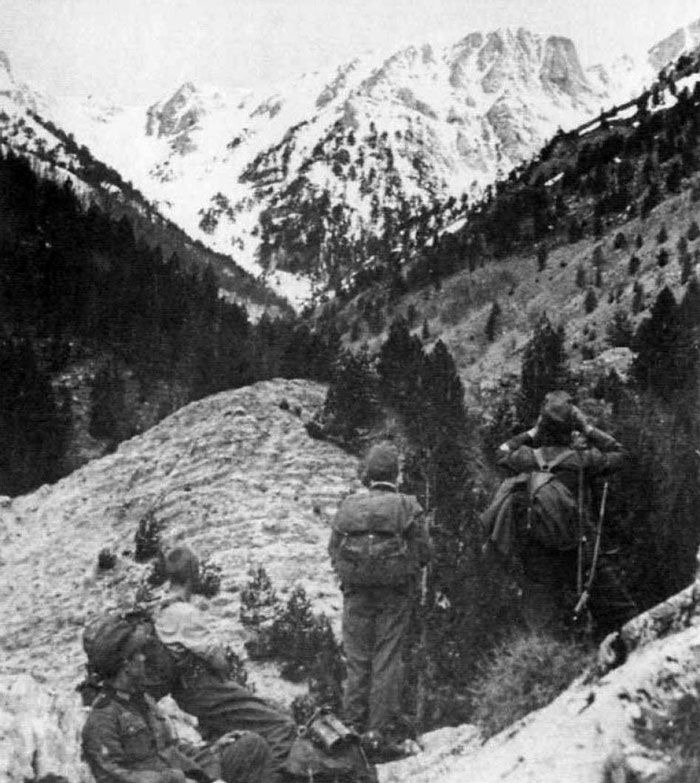 Gebirgstruppen, in their natural environment, halt on a mountain slope. They wear their high-capacity Bergen-type rucksacks. Unlike the high leather marching boots issued to the Wehrmacht, all Gebirsjäger wore low-topped laced marching shoes, which were heavy, sturdy climbing boots and puttees. 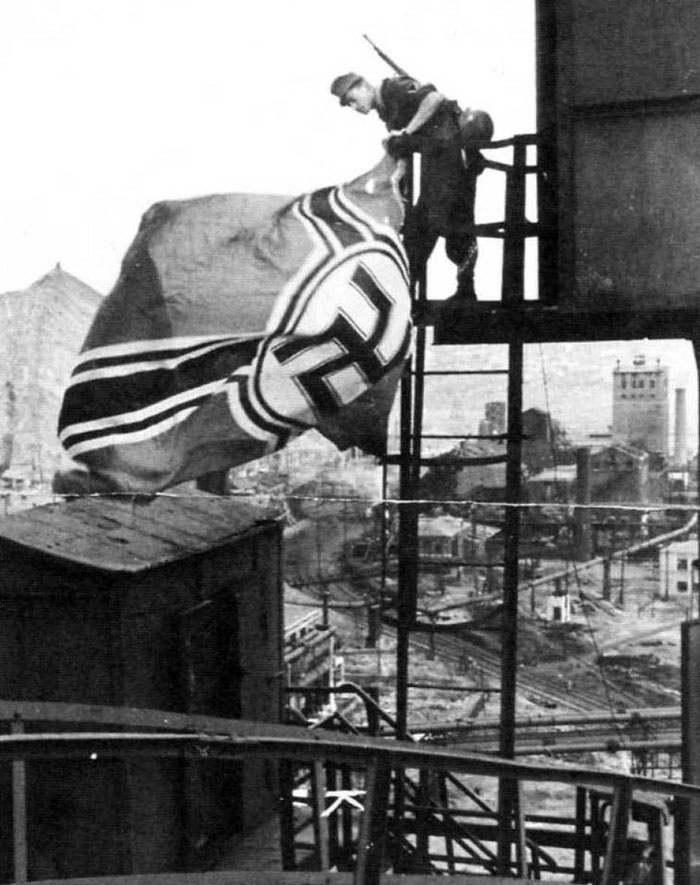 A mountain trooper hoists the German national flag from a tall building, somewhere in the Balkans, following the defeat of Yugoslavia. Yugoslavia capitulated on 17 April 1941, 11 days after the invasion commenced. German losses were significantly light, which totaled 151 killed, 392 wounded, and 14 missing.

For the invasion of Russia, code-named 'Operation Barbarossa', the German Army assembled some three million men, divided into a total of 105 infantry divisions and 32 Panzer divisions. There were 3,332 tanks, over 7,000 artillery pieces, 60,000 motor vehicles and 625,000 horses. This force was distributed into three German army groups: Army Group North, commanded by Field Marshal Wilhelm Ritter von Leeb, had assembled his forces in East Prussia on the Lithuanian frontier. His Panzergruppe, which provided the main spearhead for the advance on Leningrad, consisted of 812 tanks. These were divided among the 1, 6 and 8.Panzer-Divisions, 3, 36.Motorised-lnfantry-Division and the SS.Motorised-Division 'Totenkopf, which formed the Panzergruppe reserve.

Among the strong force of Army Group North, the Gebirsjäger were to play a major part in the battle in the East. For the invasion, the 2 and 3.Gebirgs- Divisions, which were part of the Gebirgs-Korps, were allocated in the Gebirgs-Korps Norwegen.

During the early morning of 22 June 1941, the mountain troopers attacked Russia and followed in the wake of the leading spearheads of the mighty Panzerwaffe. On the northern front, the terrain was terrible, comprising of swampland, barren rock and huge dark forests. The area was regarded as so bad that even the local Finns could not believe they were conducting operations in such an inhospitable place. But, despite the appalling conditions and the long marches, they smashed through Soviet defences and reached the River Liza in July 1941. By this time, the Russians had been totally shattered by the weight and accuracy of the German shellfire but also by the skilful deployment of the Gebirsjäger storm troops.

However, in spite the rapid drive of the German soldier into Russia, the Red Army were a complete enigma to him. There was little information supplied about the country in which they were invading, nor was there anything substan¬tial on the terrain and climate. He simply saw the Russians as Slavic people that were an inferior race. Propaganda had made good use to prove conclusively that all Russians were living in poverty and its antiquated army were totally unprepared for war. Even when the German soldier rolled across into Russia, during the summer months of 1941, he was totally unaware of the immense undertaking he had in crushing the enemy. Although the ordinary German found a huge contrast between his own country and that in which he was fighting, they were totally unprepared for the unimaginable size and distance in which they had to march. The soldiers were amazed by the immense forests, the huge expanses of marshland, and the many rivers that were continuously prone to flooding. They were also surprised that the little information they did have, was often incorrect. Maps frequently showed none of the roads, and when they were fortunate enough to come across them, they were in such terrible state of repair that military traffic would often reduce them to nothing more than dirt tracks. 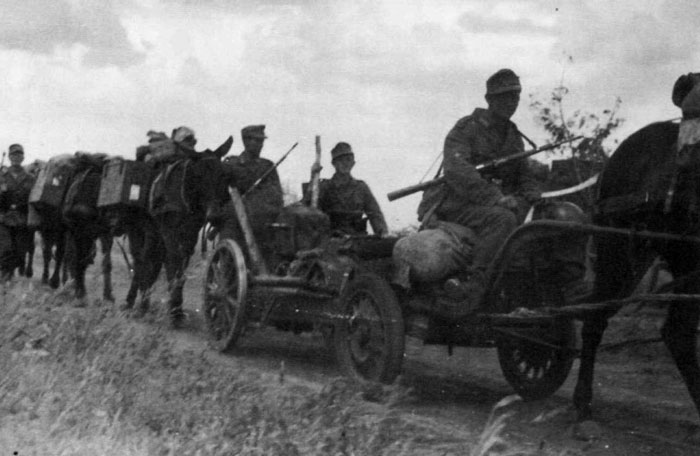 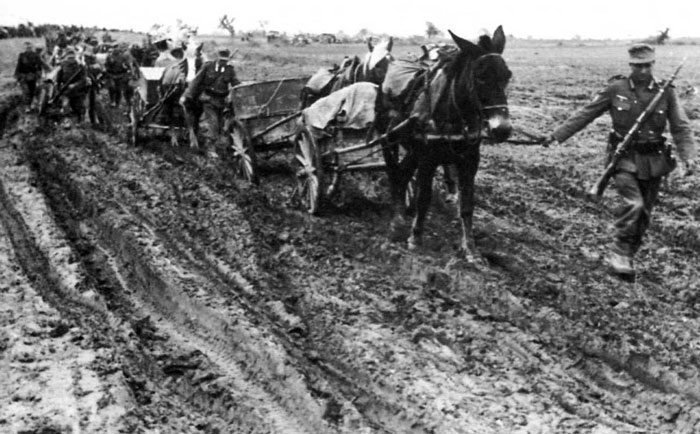 The roads were appalling in Russia and were often unable to cope with the large volumes of traffic. After a downpour of rain, the roads, which were no more than dirt tracks, were turned into a quagmire, even during the summer period in the north. Here, in this photograph, Gebirgstruppen, with their pack animals towing supplies, trudge through the mud towards the front. 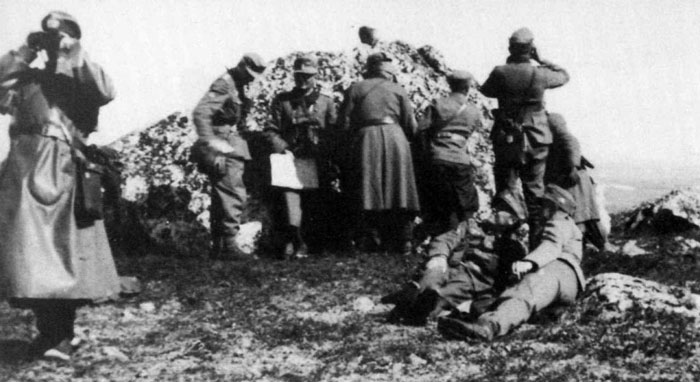 From a hill top and Gebirgs officers can be seen observing enemy positions. By their position, there appears to be some danger of enemy fire. Note the officer wearing a leather greatcoat watching the forward movement of his troops through a pair of 6x30 field binoculars.

Another great contrast that the German soldier experienced during his march through Russia was the climatic conditions. There were extreme differ¬ences in temperature, with the bitter cold sometimes dropping to thirty or even forty degrees below zero, and the terrible heat of the summer when temperatures soared to insufferable levels. When the first snow showers arrived, in October 1941, the German soldier was totally unprepared for a Russian winter. Sleet, and the cold driving rain, turned the Russian countryside into a quagmire with roads and fields becoming virtually impassable. The lack of winter clothing too, caused widespread worry for the soldiers, for they knew that the winter would create graver problems than the Russians themselves.

Living and fighting in the winter on the Eastern Front was very difficult, even for the well trained men of the Gebirsjäger. The distances the soldiers had to travel were immense. The most popular form of transport was by sledge.

Sheltering, too, posed a huge problem and many of them were taught to construct native style shelters from tree branches and build igloos. Although these mountain forces sustained heavy casualties during the winter of 1941, they grimly held the line, and by early 1942, a stalemate developed. Before the spring, only minor skirmishes continued, as both sides rebuilt their strength.

In early spring 1942, the 7.Gebirgs-Division was deployed far north, as the Soviets unleashed their new offensive. For weeks and months, the mountain troops fought a battle of attrition, trying to prevent the Soviets cutting them off. A series of vicious Russian assaults nearly succeeded, but the arrival of bad weather, once again, deprived the Red Army of victory. By the time the bad weather had improved, the Gebirsjäger had brought up additional reserves and equipment. The Russian offensive failed and the mountain troopers were able to spend the next two years, until 1944, patrolling the northern sector.

In the summer of 1944, the Red Army launched another offensive on the Northern Front. The attack was so fierce that the Finns concluded a separate peace with the Russians, in September 1944. With the prospect of being cut off, all German troops, including those of the Gebirsjäger, were pulled back through Lapland into Norway, whilst at the same time combating Norwegian troops who had now turned against them. Southern Front 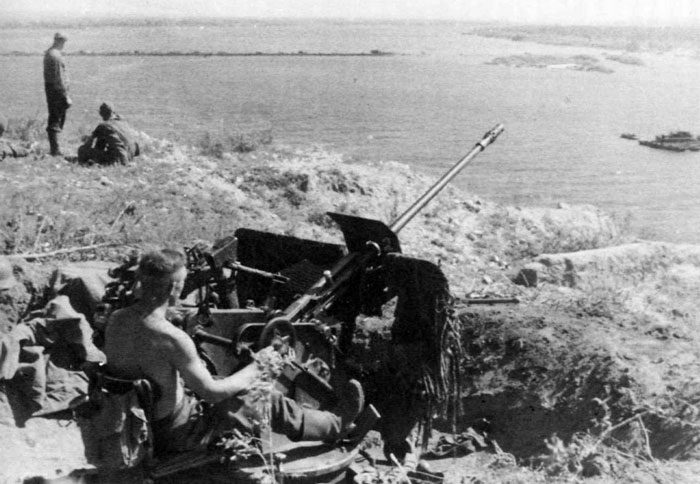 Overlooking the Baltic coast is a 2cm FlaK 30 anti-aircraft gun. This FlaK gun weighed some 770kg and had an effective ceiling range of 2,200 meters against aerial targets. In the Gebirsjäger, these guns were operated by light flak companies and were used extensively to protect both mountain troops and Wehrmacht forces against enemy aerial attacks. They could also be used in a ground defensive role too, with great effect.

On the Southern Front, mountain troops saw more extensive action against the Red Army than those operations conducted in the north. In June 1941, the 1 and 4.Gebirgs-Divisions were involved in the rapid advances which followed the invasion of Russia. The soldiers covered some 35-miles each day and maintained this truly remarkable progress, day after day, week after weary week. During these early days, morale was high. They smashed through the Stalin Line and conducted vigorous attacks deep into enemy territory. They had also partici¬pated in the encirclement of the Uman pocket, which saw 100,000 Red Army troops being marched into captivity. The Gebirgs-Korps alone captured 22,000 prisoners. This, in itself, was a great victory and for weeks and months that followed, the mountain troops pushed further east towards Stalino, which was captured in November 1941. They then advanced to positions by the River Mius where winter was fast approaching.

In July 1942, the Gebirsjäger took part in the drive on the Caucasus Mountains. It was here that the soldiers were able to exhibit their Alpine skills and scale some of the highest peaks in the Caucasus range. On Mount Elbrus, they managed to plant the German national flag. By the end of 1942, as the city of Stalingrad was about to fall, the 1 and 4 Gebirgs-Divisions were withdrawn, barely escaping the clutches of the Red tide. Both divisions halted at the Kuban bridgehead, where they fought until the autumn of 1943, in mosquito-infested marshland.