Operation Weser-Exercise, which was the code-name for the attack, was planned to be launched on 9 April 1940. No real opposition was anticipated from either Denmark or Norway and it was reckoned that the invasion would be completed within a matter of a few days.

The mountain troop's objective was the port of Narvik in the north of Norway. The Gebirsjäger division was given the task of capturing Narvik under the command of Oberst Windlisch. The landing was unopposed and the town was taken without a shot. The divisional commander, Generalleutnant Eduard Dietl, demanded, and received the same day, a formal surrender of the local garrison. The success of the Gebirsjäger was short-lived when the Royal Navy arrived the following day and unleashed a series of heavy naval attacks that saw the sinking of a German flotilla with heavy losses.

Totally cut-off, Dietl and his mountain troops, together with 2,000 now redun¬dant sailors pressed into service, were ordered to construct a defensive ring around most of the port. Over the following days, the Gebirsjäger, once again, showed their special skills against Norwegian regular army units and elements of a British expeditionary force and Polish and French troops supported by heavy Royal Navy bombardments. The battle raged day and night with the mountain troops fending off each assault. But, as the fighting continued to rage, the attrition rate weakened the German defences. Time was slowly running out for Dietl's beleaguered force in Narvik. He decided to make one last attempt to reach the port by sending a company from each Gebirsjäger battalion. Carrying only light equipment, they endeavoured to reach the port at speed. The journey took them over 130-miles of barren wilderness, crossing rivers and glaciers in appalling arctic conditions. When reports finally confirmed that a relief force, consisting of remaining elements of the 3.Gebirgs-Division, were only a few days march from Narvik, an order arrived cancelling the operation. On 8 June, a Gebirgs patrol unit finally confirmed that the Allies had reluctantly evacuated their troops from Narvik. The following day Norway surrendered. 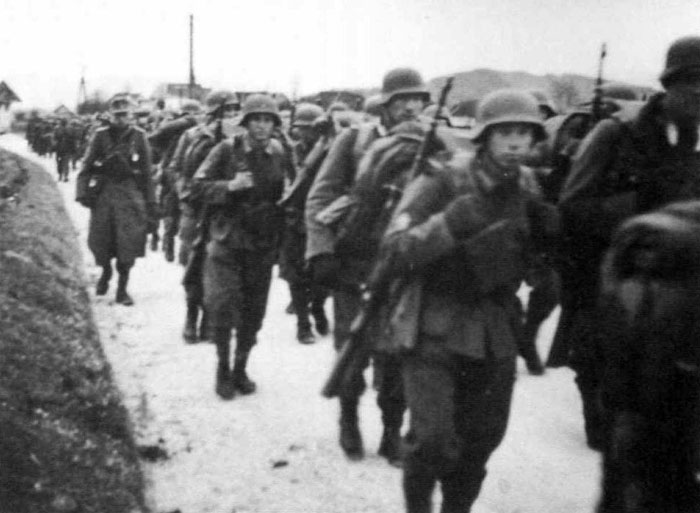 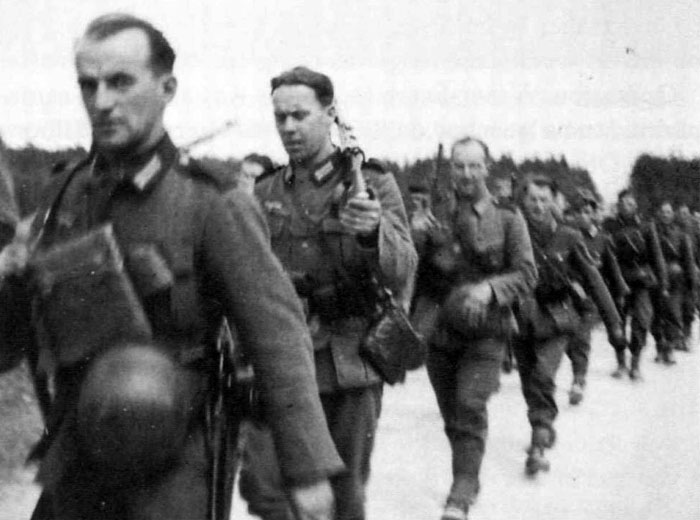 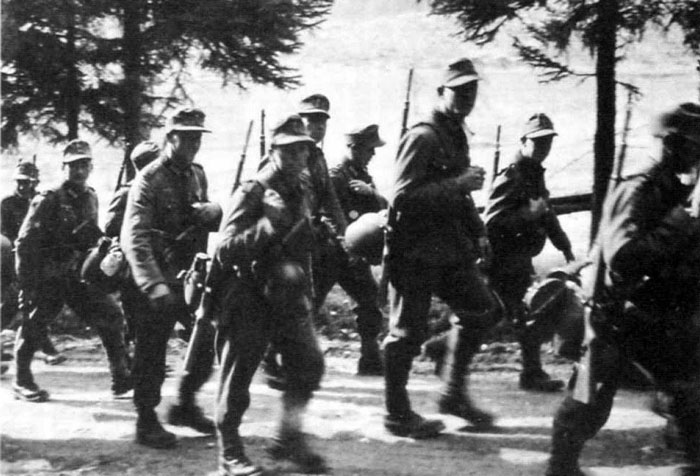 Three photographs showing the Gebirsjäger on the march at the beginning of the war. For these soldiers advancing from the Slovak border into Poland, the terrain offered a wide range of challenges to any units attempting to operate in it. The ground was often irregular, broken or rugged making traversing difficult. The long marche through Poland frequently had its own physical challenges on both the men and their animals. In many areas of the advance, road and rail were almost non¬existent, making the advance often slow and precarious.

The Gebirsjäger were hailed heroes of Norway and Dietle, who was decorated with the Knights Cross of the Iron Cross in recognition of his men's success, was soon known in Germany as The Hero of Narvik'. As in the Polish campaign, the mountain troops had once again shown their ability to resist at all costs. But it was in Norway for the first time that the troops had shown their expertise in the snow. Energetic commanders with great Alpine qualifications had led their men across a wilderness in which there were no roads at all. In some areas they advanced through snow more than a metre deep, whist in other places the area was barren rock. 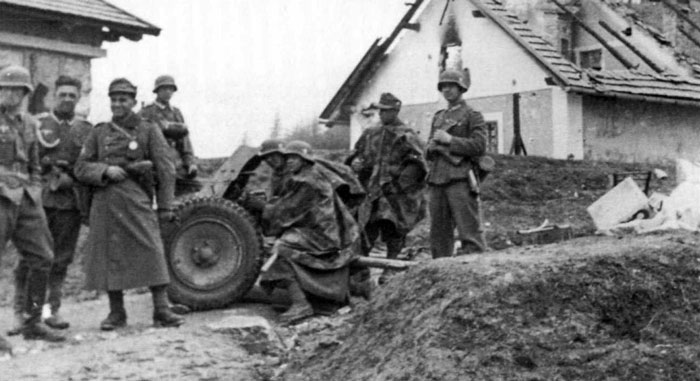 Posing near a destroyed mountain building on the Slovak/Polish border, a 3.7cm PaK35/36 anti-tank gun can be seen. The gunners are seen wear the shelter quarter or Zeltbahn. 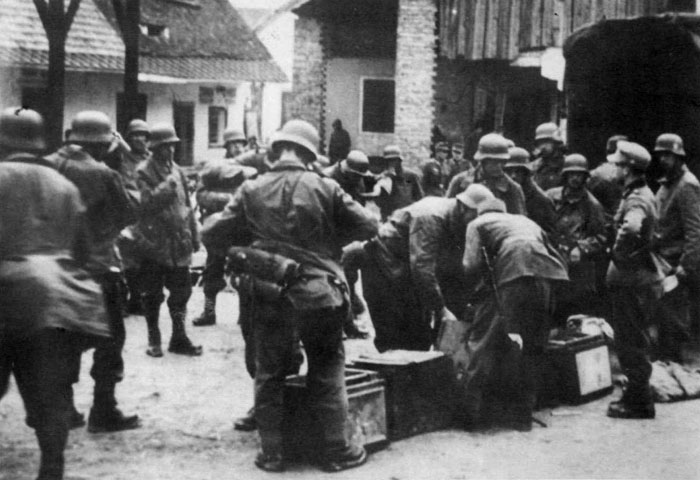 Gebirgs troops preparing to move out from a Slovak village square in order to prepare for the long march through Poland alongside the German 14.Armee. A typical Gebirgs- Division, in 1939, comprised of 17,000 men and about 900 motor vehicles, 450 motorcycles, 1,110 horse drawn wagons, and 5,300 horses and mules. 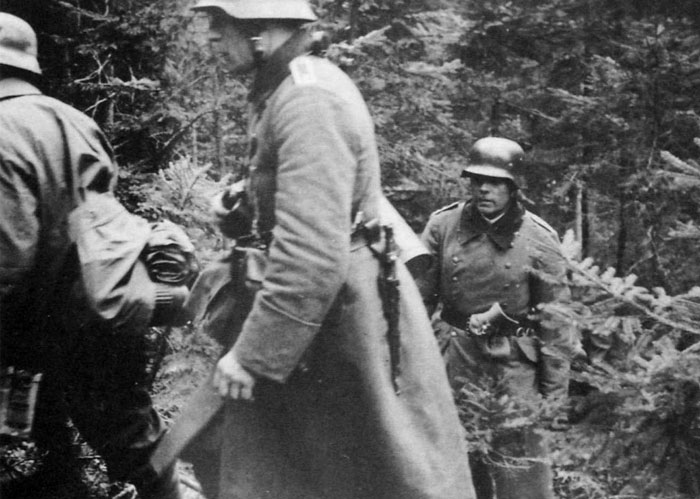 Two mountain soldier NCOs advance through a mountainous pine forest during the initial stages of 'Case White', the German code-name for the invasion of Poland, in September 1939. Both soldiers wear the standard issue Greatcoat with dark green collar.

After traversing through the mountain ranges along the Slovak and Polish border, extensive areas of southern Poland were often flat with streams, ravines and rivers making effective natural obstacles for the mountain troopers. In this photograph, a column of Gebirgs soldiers cross a stream with Mules towing If.8 Infantry carts. In the far distance, at the foot of the mountain, a long column of mountain troops can be seen. Note the white Edelweiss insignia painted on the infantry cart indicating that this belongs to the 1.Gebirgs-Division. 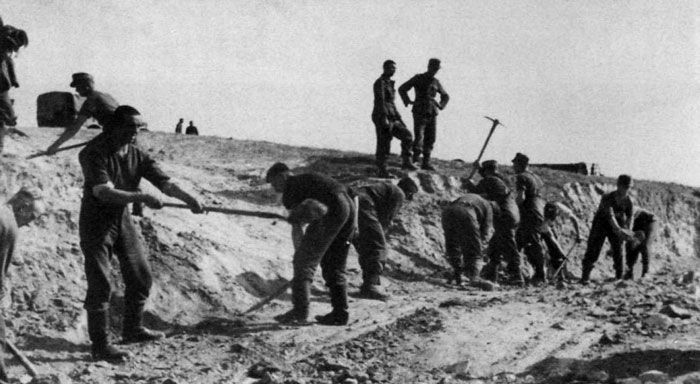 Gebirgs engineers have set to work preparing ground, probably for a bridging section across a river. Many of the bridges in southern Poland were destroyed by Polish demolition teams which often hindered German movement. 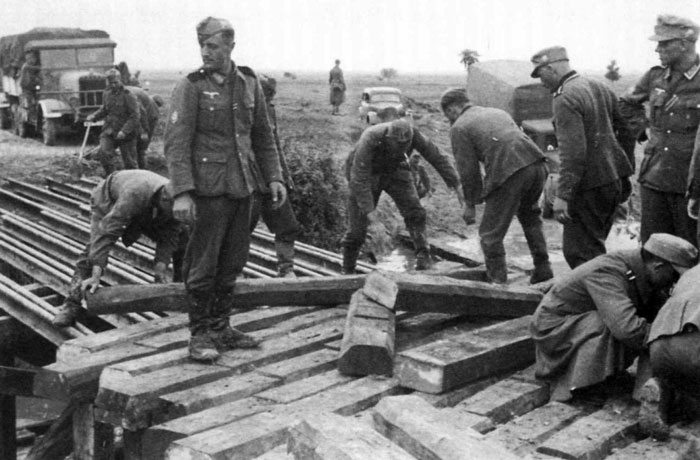 A Gebirgs pioneer unit are seen erecting a bridge equipment 'C' across a river. Much of the wood obtained to construct these bridges were commandeered from lumber stocks and followed the advancing column into Poland. 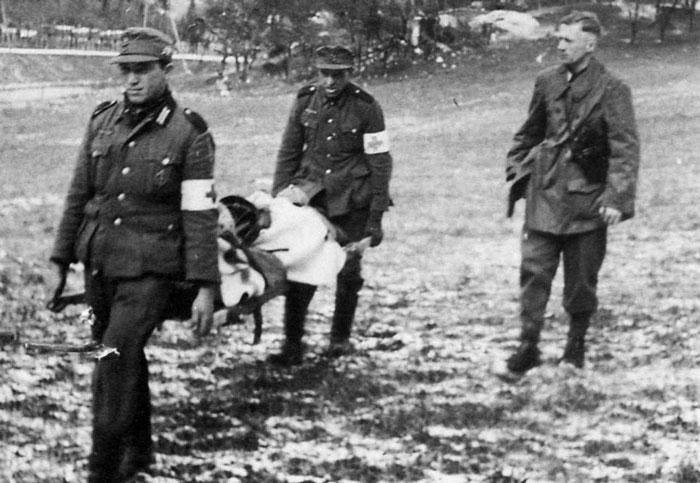 Two Gebirsjäger medical stretcher bearers are seen moving an injured comrade to one of the hastily erected field hospitals in the rear. An officer overlooks the procedure, possibly wearing the Gebirgs wind jacket. 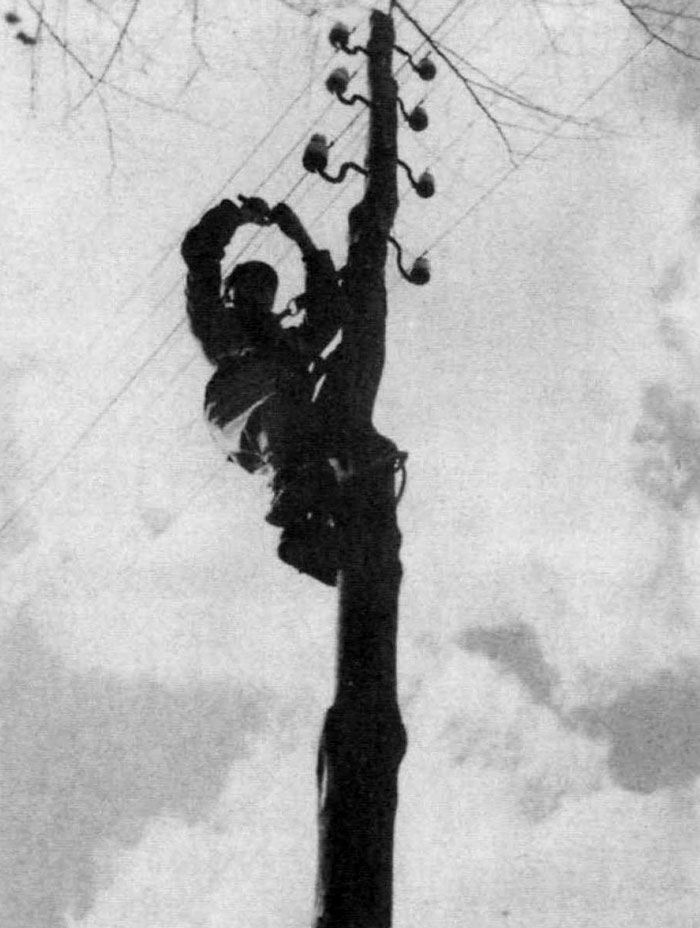 One of the most important aspects of military synchronization was effective communication. Here, in this photograph, a signalman engineer is seen fixing a telephone line so that the various commands could communicate between themselves. 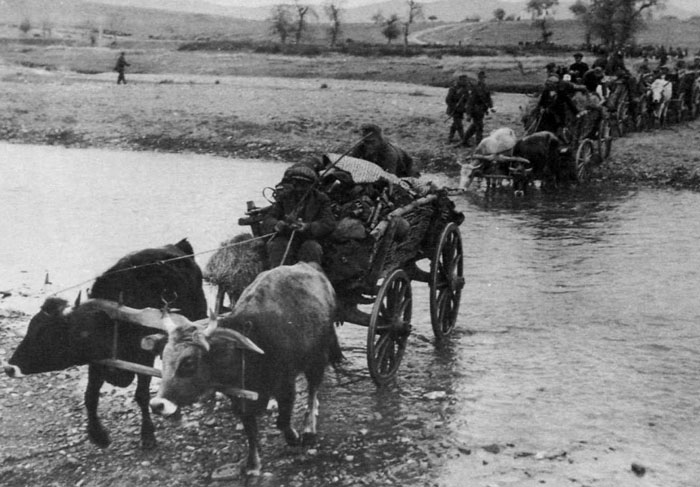 Two photographs taken in sequence showing local civilian carts pressed into service and being used by Gebirgstruppen of the 1.Gebirgs-Division, in September 1939. Local civilians were often hired to drive the wagons and were paid very well for their services. However, it was frequently a dangerous preoccupation with a number of them being killed by enemy fire. 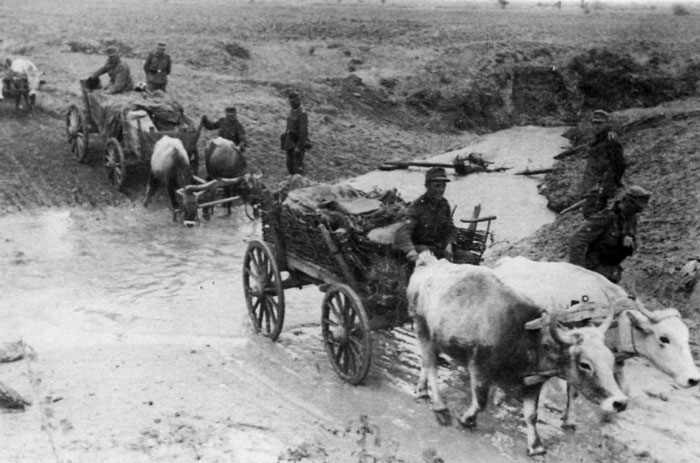 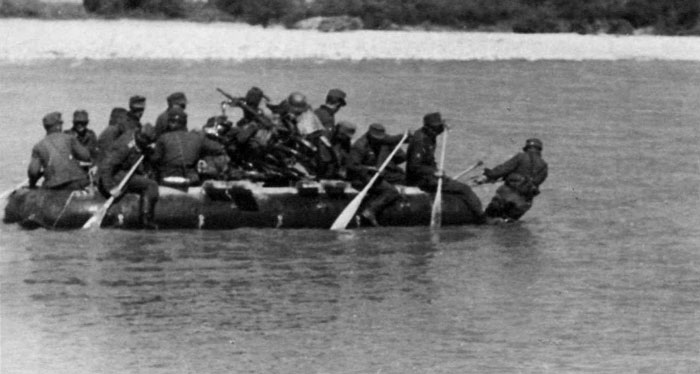 Mountain troops are seen paddling across a river in a pneumatic boat. These 18 feet boats could carry a multitude of equipments up to 1.35tons. They were also used to construct pontoon bridges. In this photograph, bicycles can be seen stacked onboard. 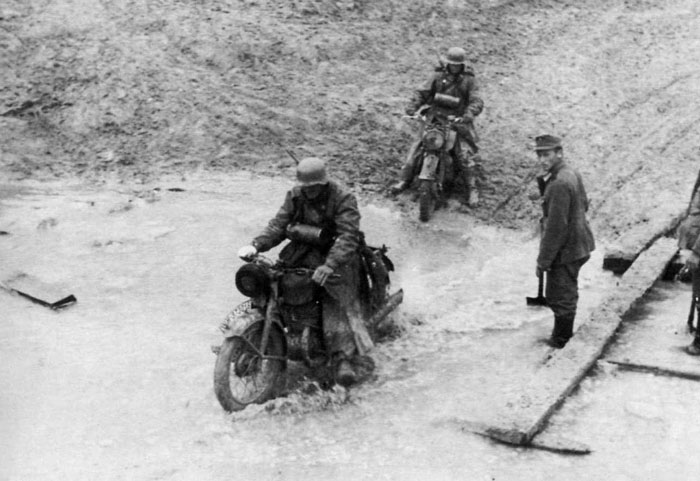 Two motorcyclists, wearing their distinctive rubberised coats, wade across a stream during a Gebirgs units drive through southern Poland. A pioneer with a spade has been attempting to erect a temporary crossing for the motorcycles, but without much luck. 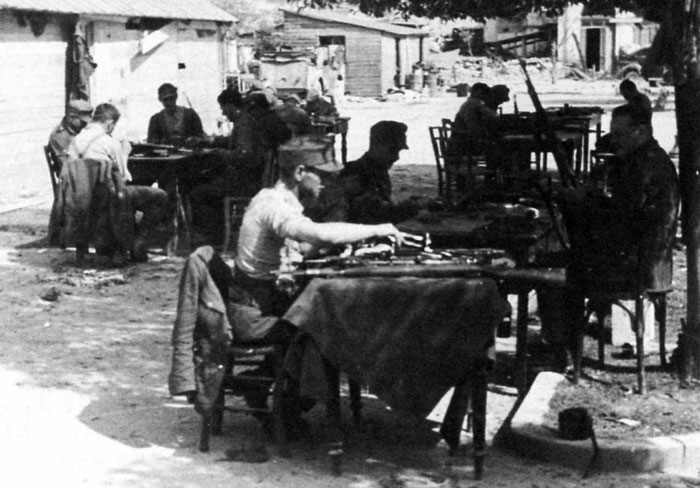 Mountain troops have occupied a village somewhere in southern Poland and are seen cleaning their weapons. This was known to the soldiers as, 'Clean and patch hour', which was a period of time allowed in order to clean weapons and repair clothes before resuming operations. 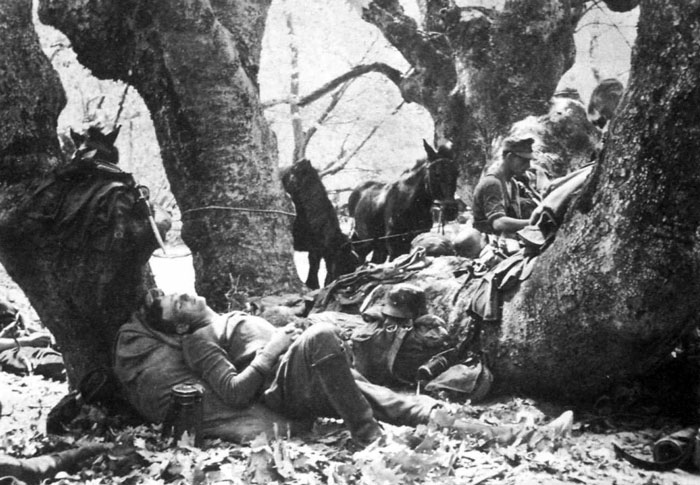 The arduous terrain in which the mountain troops advanced into Poland can well be imagined and, as a consequence, sapped the strength from many of the men participating in the long march. In this photograph, a pack-mule unit takes a much needed respite. 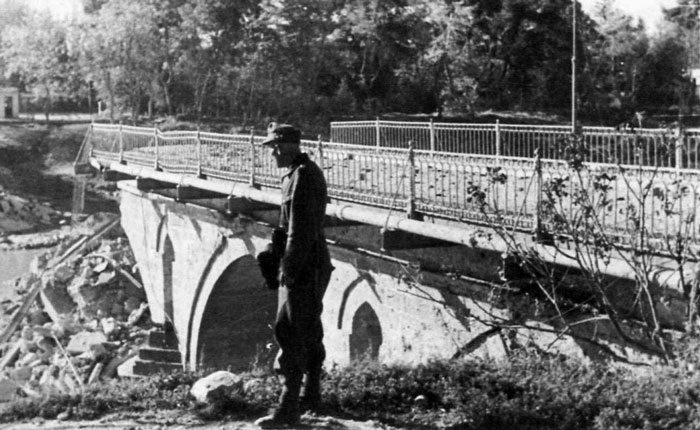 Two photographs taken of the same bridge, destroyed by a Polish demolition team, during the German drive through Poland, in September 1939. In one of the photographs, two Gebirgs soldiers can be seen carrying supply bundles on a pole. 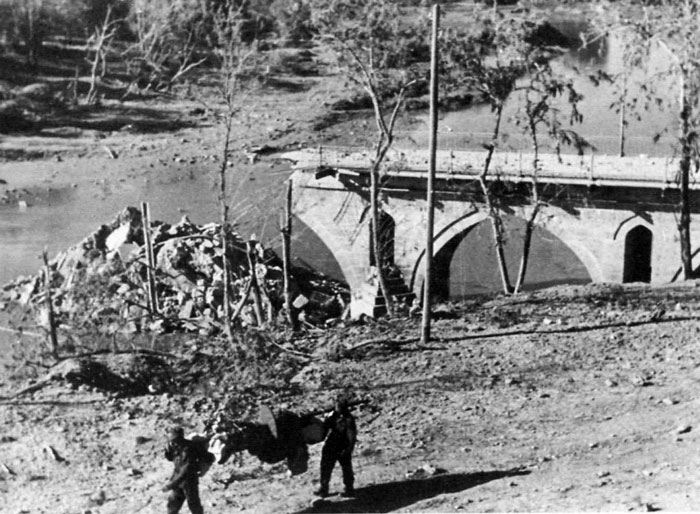 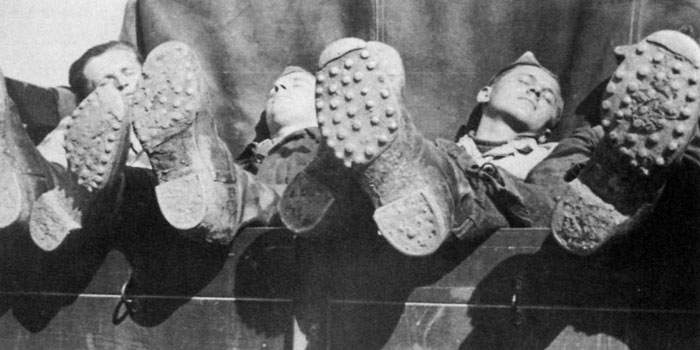 Gebirgstruppen sleep on the rear of a supply truck during operations in Poland. Note the detail of the soles of the climbing boots. These boots were known as the Bergstiefel or mountain boots, which were harder wearing than the standard issue, black leather marching boots, issued to the Landseer. 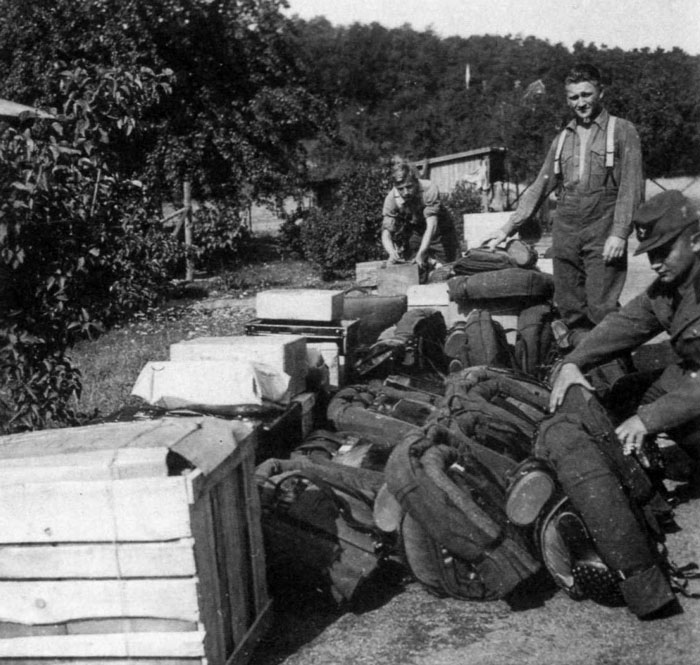 Mountain troops have unloaded their supplies and prepare to move along the coast. It was in the early morning of 9 April 1940, 'Weser Day', when the German Army finally unleashed its might against Denmark and Norway. The invasion fleet's nominal landing time - Weser Hour (Weserzeit) - was set to 05:15 AM German time, equivalent to 04:15 Norwegian time. The first German forces ashore in Norway landed by ferry in Gedser at 04:15, and moved quickly north. Progress was swift with minimal resistance. 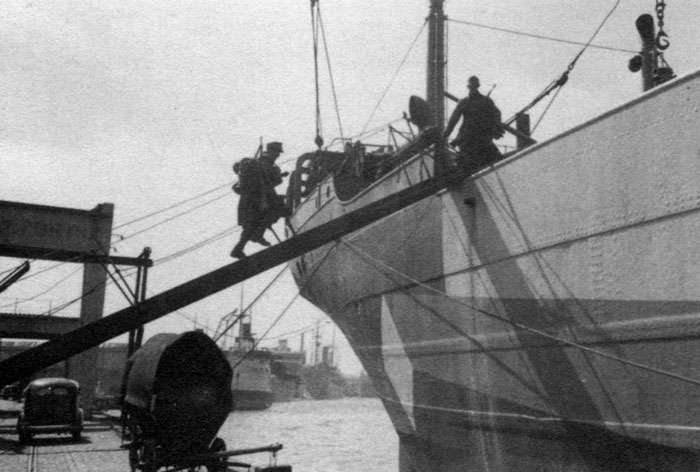 Two photographs showing a German vessel in early April 1940, preparing for its voyage to Norway, carrying Gebirsjäger troops and supplies. The mountain troops objective was the port of Narvik. The planned attack again Denmark and Norway was code-named 'Operation Weser- Exercise' was to be launched on 9 April 1940. No real opposition was anticipated from either Denmark or Norway and it was reckoned that the invasion would be completed within a matter of a few days. In order to meet the deadline for the attack, a number of slow moving tanker and supply ships left German ports in advance, so that they could be in position to refuel the vessels of the task force as they arrived to carry out their attack, code-named 'Weser Day' (Wesertag). 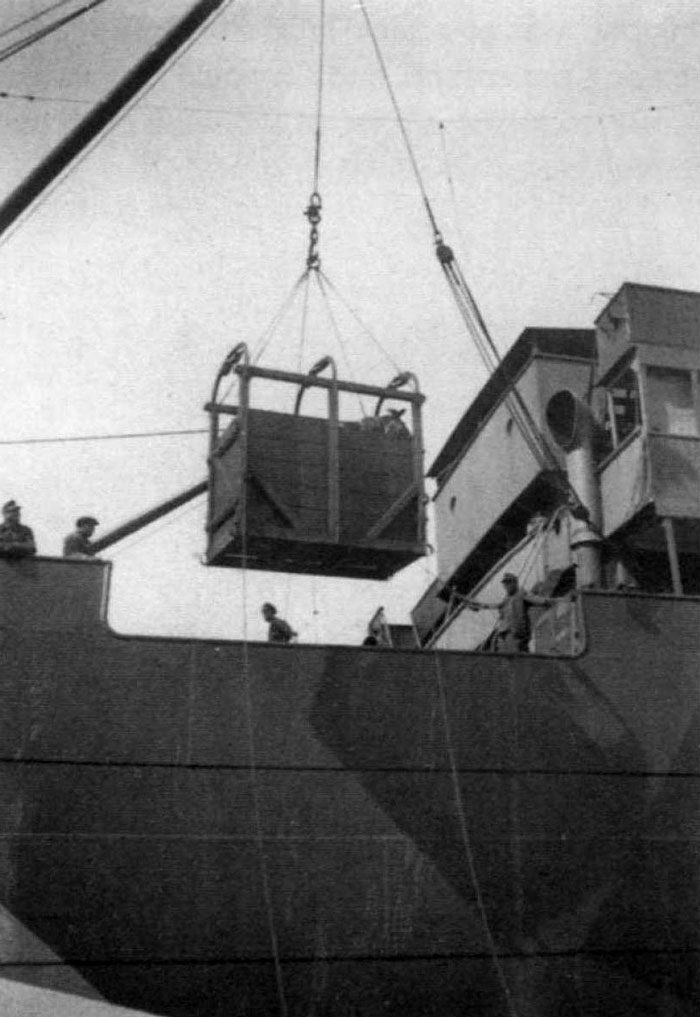 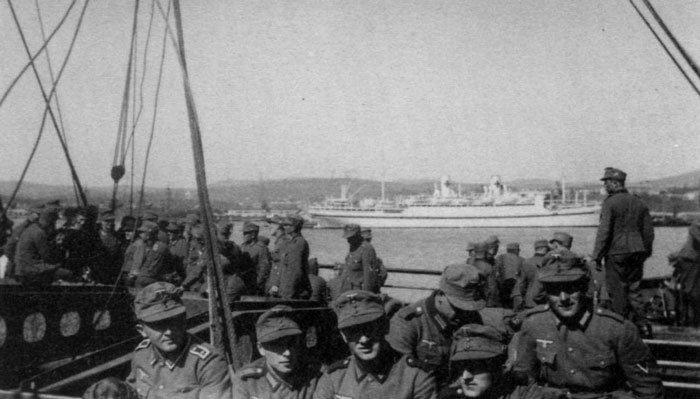 Two photographs showing mountain troops of the 3.Gebirgs-Division preparing to leave port in one of the supply ships destined for Norway in early April 1940. These Gebirgstruppen were under the command of General Eduard Dietl and their objective was to capture Narvik and Trondheim using the 136.137.138. and 139.Gebirgs-Light-Infantry, the 111.Gebirgs-Artillery and the 112.Gebirgs-lnfantry. For the attack, five attack groups were formed for the invasion. Grupe.l, headed by the battle cruisers 'Gneisenau' and the 'Scharnhorst' was to attack Narvik, Gruppe.2, supported by the 'Hipper' was to attack Trondheim, Gruppe.3 was to attack Bergen, Gruppe.4 was to attack Kristiansand, and Gruppe.5 was to attack Oslo. Gruppe. 1 and 2 were also accompanied by a total of fourteen destroyers. The ships carrying German troops started to leave German ports on 7 April. 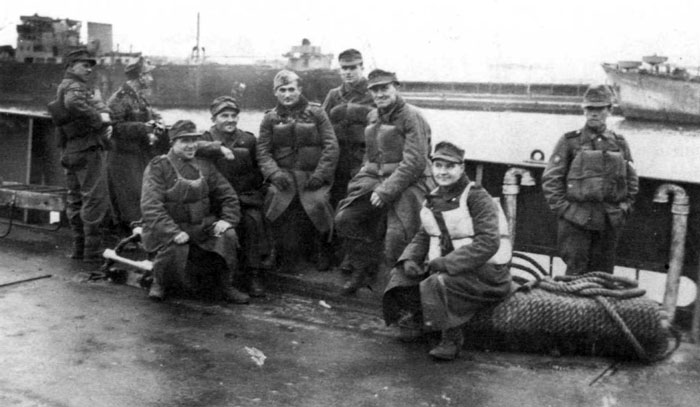 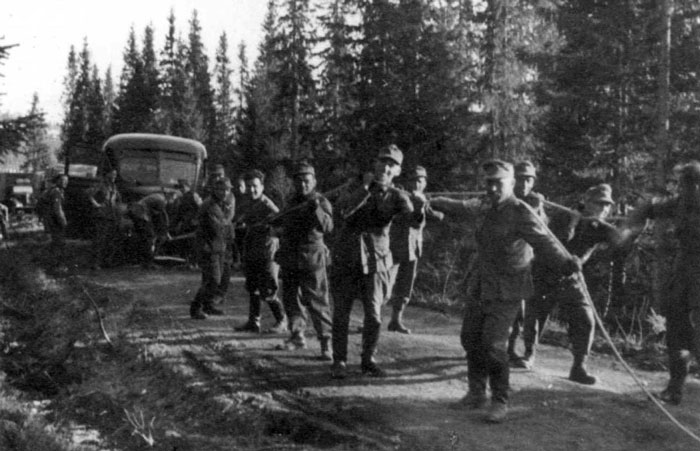 Two photographs showing Gebirgstruppen of the 3.Gebirgs-Division on the march through Norway during the initial phase of the campaign. With much of the terrain mountainous, moving vehicles was sometimes slow due to the unfavourable pine roads along the coast. Although the Norwegian Army were taken by complete surprise by the German invasion, unlike most of the Danish the Norwegian military were determined in a number of areas to oppose the German advance. 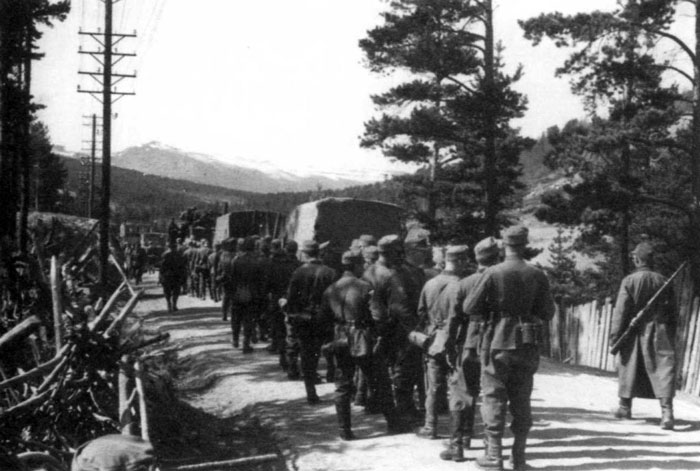 A coloumn of horsedrawn supply carts march along a road. Among the carts is a HF 12 small kitchen wagon. These small mobile kitchens could operate on the move, cooking stews, soups, and coffee. The limber carried utensils and equipment. The troops nicknamed these kitchen wagons as goulash cannon's'. Many of these mobile kitchens were often towed by animal draught. 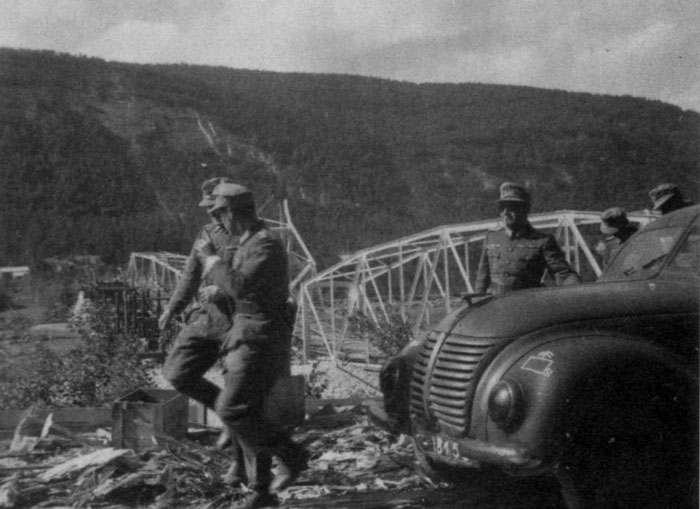 A Gebirgs staff car has halted on an alpine road somewhere near Narvik. Officers are seen conversing as they walk along the road. As German forces pushed forward, the remaining Norwegian Army gathered as best they could to oppose the German advance up the coast towards the central cities of Andalsnes, Trondheim and Namos, and to counter the German landing in the far north at Narvik. The Gebirgs fought with considerable skill and tenacity. 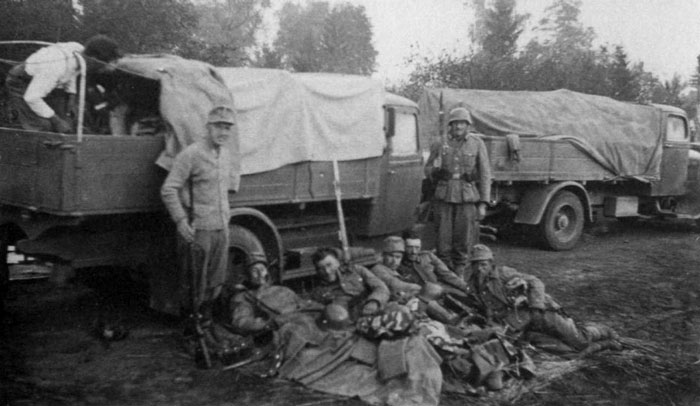 Gebirgstruppen pause in their advance and rest beside a road with their support vehicles during operations just outside Narkvik. The success of the Gebirsjäger was short lived in Narvik. Generalleutnant Eduard Dietl and his mountain troops, together with 2,000 redundant sailors were pressed into service and ordered to construct a defensive ring around most of the port of Narvik. 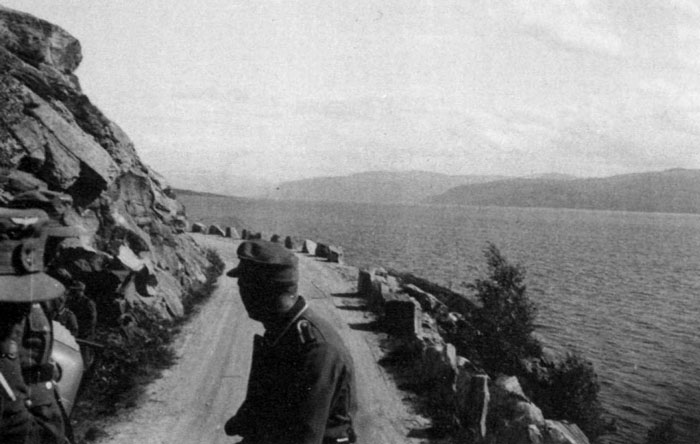 Gebirsjäger troops along a coastal road somewhere in eastern Norway. The soldier's distinctive Bergmütze mountain field cap can be identified along with the standard M36 field blouse with its dark facing collar.

During a short rest break, Gebirsjäger troops are seen resting on a hillside overlooking a small coastal village. In Norway, the mountain environment offered a wide range of challenges for the men. The ground was often irregular, broken and rugged but many had extensive training on this sort of terrain. 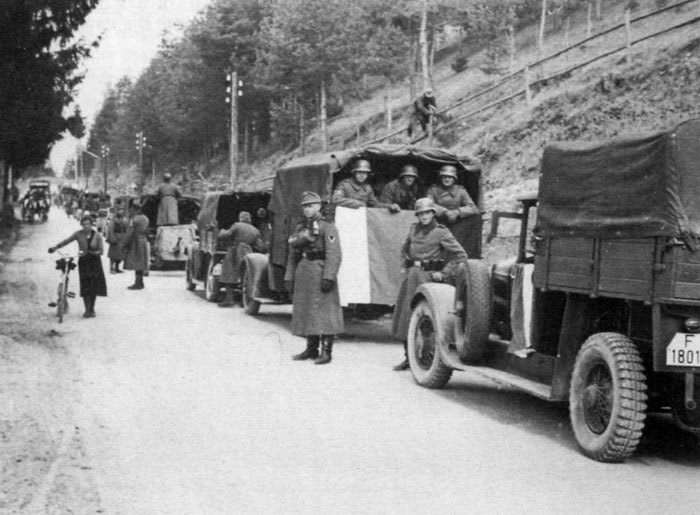 A column of Gebirgs vehicles laden with supplies and troops have halted on an alpine road. One of the vehicles can be seen towing a 3.7cm PaK35/36 anti-tank gun. Whilst this PaK gun was now regarded as outmoded, against the Norwegian Army it still undertook sterling service.