The London Scottish was attached to the Gordon Highlanders after the First World War. Its three battalions served in various TA formations in the Second World War and after.

The Gibraltar Regiment was created in 1958 out of the regular and volunteer factions of the Gibraltar Defence Force, which was set up at the beginning of the Second World War to help man the Rock's anti-aircraft guns. The royal title was granted on the 60th anniversary in 1999. Regimental headquarters are at Devil's Tower Camp in Gibraltar.

The blue peaked cap has the royal scarlet band and welt, and the regimental cap badge, which is based on that of the Gibraltar Defence Force of 1915-21: the castle and key, from the arms of Gibraltar, on a shield superimposed on a crowned decorative backing (depicting the Mediterranean) with a scroll labelled Nulli expugnabilis hosti, which roughly translates as 'Never taken by an enemy'.

Royal Artillery grenade collar badges and buttons are marked with the castle and key. The castle represents the fortified Rock, the key its strategic position - the gateway to the Mediterranean Sea.

Service dress is worn with a lanyard on the right shoulder, scarlet and grey for officers and RA white for other ranks. A cloth patch bearing the key emblem is worn on the upper sleeve.

Stable belts are scarlet with twin grey stripes running through.

Regimental marches were adopted when the force was largely Royal Artillery controlled: British Grenadiers and the RA Slow March.

The Regimental Day (28 April) celebrates the first parade by the volunteers of the Gibraltar Defence Force at the RA base on Europa Point. The men paraded in civilian clothes to begin their training in foot, rifle and gun drill.

Sortie Day (27 November) commemorates an episode in 1781 when Gibraltarian volunteers joined British units in action during the Great Siege.

The port sergeant of the Gibraltar Regiment in No. 3 dress, 2004, holding the keys to the garrison. (Grenadier Publishing)

The Ceremony of the Keys originated in the Great Siege of 1779-83, when the governor's daily routine was to commend the keys of the garrison to the safe-keeping of his port sergeant at the sound of the sunset gun. After the siege the custom continued with a ceremony that involved fifes and drums to warn aliens to leave before the gates were locked for the night. In 1978 the governor suggested that the post of port sergeant be found in a senior NCO of the Gibraltar Regiment. At official banquets the sergeant reports to the governor's table with the assurance 'Your Excellency, the fortress is secure and all's well', before passing the keys over.

Alliances were made with four regiments whose connection with Gibraltar go back to the eighteenth century: the Royal Anglian in 1968, the Royal Artillery in 1993, the Royal Engineers in 1996 and the Royal Irish in 1999.

When the last RA units left the Rock in 1958 the gunner troop of the Gibraltar Regiment inherited two responsibilities - the firing of royal salutes and the care of the Rock's apes. The gun troop is the only unit able to exchange gun salutes with the Honourable Artillery Company in London.

Although the Royal Marines (RM) have not been a part of the army for over 250 years, their army roots strike down deep and are evident today.

'Marine' is defined as 'of the sea', and the first regiment of marines was formed during the Second Anglo-Dutch Maritime War of 1664-6, to serve aboard navy ships. Subsequent wars brought new regiments of sea soldiers 'to make landings or otherwise', but these too were disbanded at the end of each conflict.

In 1755 a permanent Corps of Marines was established under the Admiralty. It achieved the royal title in 1802. 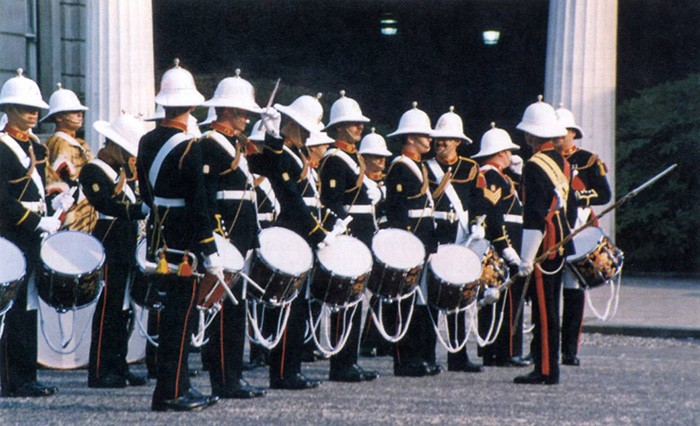 Twenty-first-century marines are regarded as an elite fighting force with their feared commando units. The Special Boat Squadron was formed for covert raiding operations.

The Royal Marines have special connections with Deal, Chatham, Plymouth, Portsmouth and Poole.

The white naval peaked cap is worn with a scarlet band and the 1827 globe and laurel wreath badge surmounted by the royal crest. The globe represents the marines' worldwide service, the laurel their achievements in Britain's affairs in nearly every country on the globe. As a crest the badge is combined with its eighteenth- century forerunners, a fouled anchor, the motto Per mare per terrain (By sea by land), and the single battle honour Gibraltar 1704.

Full dress is issued to musicians and drummers. It consists of the white 1912 Wolseley helmet, and the blue uniform of the Royal Marine Artillery with the cuffs of the Royal Marine Light Infantry. These two sections developed in the nineteenth century and came together in 1923.

No. 1 dress may be worn with cap or helmet. The officers' jacket, adopted after the First World War, is Royal Navy pattern with an open neck collar to reveal a shirt and tie. Members of the King's Squad, the title given to the senior training unit by George V, wear a white lanyard, and the helmet chinstrap down.

The quick march, A Life on the Ocean Wave, was taken in 1882 to replace less appropriate scores dating from the 1830s. The slow march, Globe and Laurel, was used from 1935 and in 1952 RM commandos adopted the trekking song of the Boer commandos, Sarie Marais. The Preobrajensky March was introduced by Earl Mountbatten in 1964.

On the tercentenary of the first marine regiment, in 1964, HM The Queen granted RM officers permission to make the loyal toast when seated, in naval fashion.

RM anniversaries are cited in daily orders on these dates:

28 October - the formation of the Duke of Yorke and Albany's Maritime Regiment, 1664.

2 April - the Battle of Comacchio in 1945 (Fleet RM Protection Group).

21 May - the landings at San Carlos Water in 1982 (3 Commando Brigade, HQ and Signal Squadron, and operational landing craft squadrons).

Battle honours are awarded to regiments that have seen active service in a significant engagement or campaign, generally with a victorious outcome.

Early awards for outstanding service in battle revolved around new titles (seventeenth century) and laurel wreaths (eighteenth century). The first battle honour in the shape of a label, with the name of battle/campaign thereon, came in 1768, when Emsdorff was taken from the caps of the 15th Light Dragoons and emblazoned on their guidon. Sixteen years later Gibraltar was put on the second colour of four infantry regiments which defended the Rock in a siege that lasted from 1779 to 1783. These colours, guidons and standards are regarded as sacred for the honours they bear and the lives lost in their name.

The first campaign honour came in 1802, when thirty-three regiments received permission to display a sphinx emblem to represent their part in the expedition to rid Egypt of Napoleon in the previous year. The year 1815 saw Peninsula awarded to eighty- seven regiments for the war of 1808-14 in Portugal, Spain and southern France, and Waterloo to thirty-eight regiments for their part in the great victory of the same year that brought the French wars to an end. Twenty-three battles of the Peninsular War were honoured to the regiments concerned on a fairly ad hoc basis from 1817 on.

Colonial wars were recognised spasmodically and in 1882 a review of battle honours put the great victories of Marlborough and Wolfe on the map. The 1909 review belatedly recognised seventeenth-century campaigns and some forgotten battles of the eighteenth century. After this, battle honours were awarded on a more efficient basis. 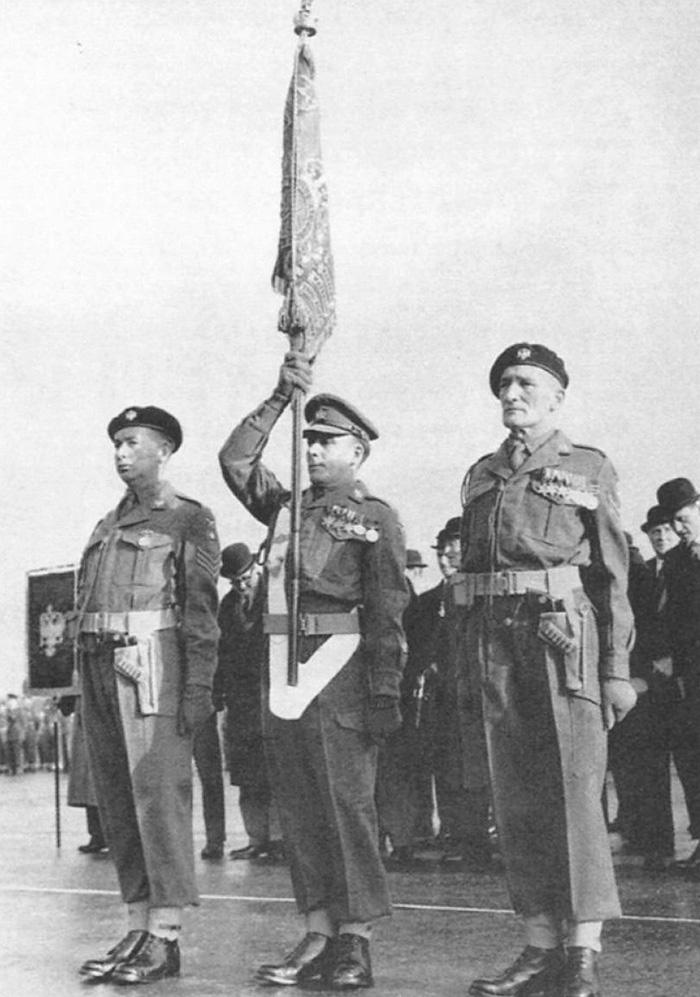 The standard of the 1st King's Dragoon Guards at Tidworth, 1958

The First World War threw up 163 battle honours for regiments that had had battalions serving on all fronts. The resulting numbers of honours per regiment, therefore, were so great that a limit of ten was imposed for display on colours, standards and guidons. The same situation occurred after the Second World War, though on a slightly smaller scale, and the ten honours limit was applied again. A regiment would select its ten most important battle honours of the war, often those that commemorated the greatest loss of life. On average its actual list of battle honours would be about twice the size of its displayed honours.

A regiment's list of honours is a measure of distinction among its peers, but the modern regiment's long list of amalgamated honours can appear anonymous and repetitive, with regimental origins obscure.

A survey of the regiments of the Regular Army in order of precedence, before the many changes that took place in the reign of Elizabeth II, gives a clearer view of the origins of the modern regiments' honours. 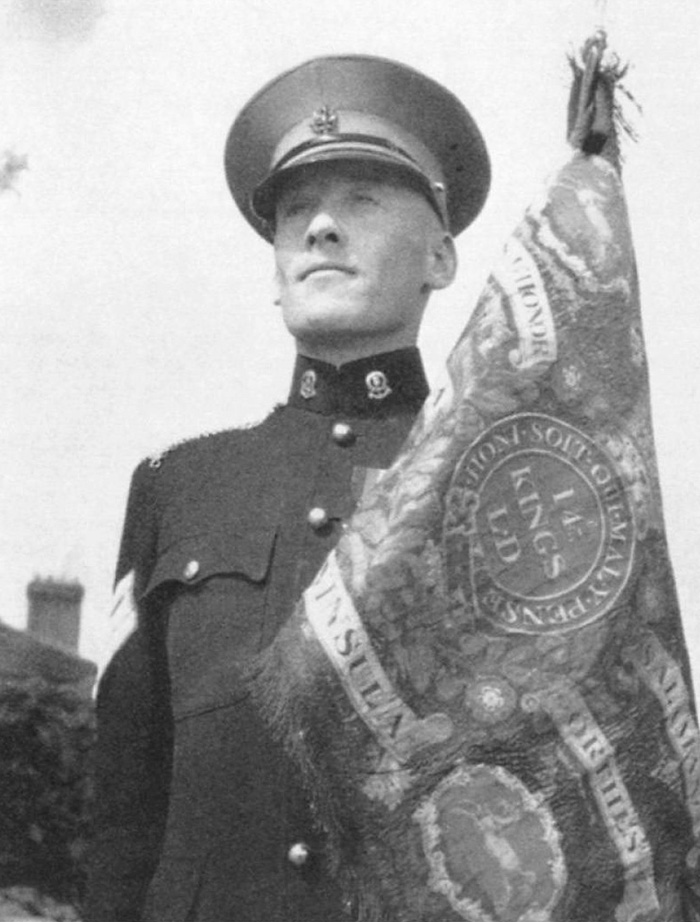 A sergeant of the 14th/20th King's Hussars with a guidon of the 14th Light Dragoons, showing its painted Peninsular War battle honours