Rear Admiral Spurance was the commander of Carrier Task Force 16. This figure represents the full khaki working uniform. The coat was made of cotton duck, unlined, with three gilt USN buttons down the front, the lowest in the middle of the belt. The belt was of the same material as the coat and was sewn down all around. The cuffs were plain, although in the '30s, black worsted rank rings had been worn. A bellows pleat in each rear side seam was optional. The coat was worn with a cotton khaki shirt and plain black tie. Rank insignia was worn on the shirt collar and on the shoulder boards, called "shoulder mark," which were the same as on the dress whites. The universal combination cap was worn with a khaki cotton cover. 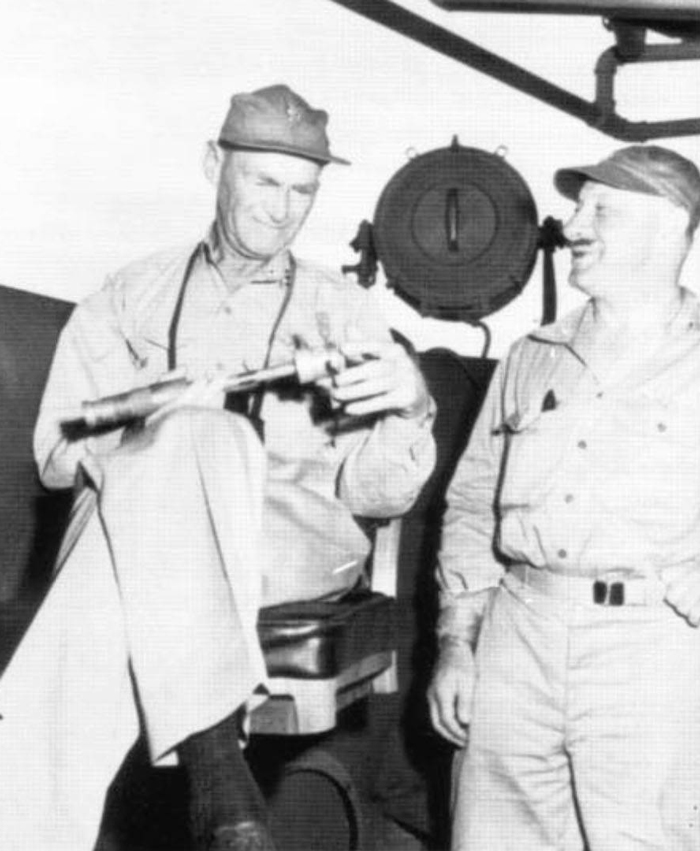 Marc Mitscher on the bridge of the carrier, Lexington. (National Archives)

Lieutenant-Commander McClusky Jr was the commander of the Enterprise Air Group (CEAG) at the Battle of Midway. He is shown wearing a flight suit and flying gear from this period. The flight suit is a one-piece, warm weather model made of khaki cotton. It is worn with the inflatable life preserver, M1940, the so-called "Mae West." The leather shoulder holster was the same model as that used by the army, holding a .38 Smith and Wesson revolver. The flying helmet was also cotton, unpadded, with radio earphones sewn into the helmet itself. These helmets varied widely, since the replacement of earphones was done on board ship; often helmets were completely remade in the process.

Due to the tropical nature of Guadalcanal's climate. Admiral Ghormley wears the typical khaki long sleeve shirt, trousers and overseas cap. Even though gray working dress had officially replaced khaki in 1942, the navy allowed officers to wear their old khaki uniforms until they were worn out. The gray service uniform was not unknown in the Pacific Theater but it was unpopular with most personnel and was. eventually, withdrawn from service in the 1950s.

Vice Admiral Fletcher is also kitted out in the ever-present khaki long sleeve shirt, matching trousers and khaki service dress hat. In addition, the admiral wears the US Navy version of the Army M1941 "Parsons" jacket (see Elite 85: US Commanders of World War II (1) Army and USAAF). This light OD jacket differs from the army counterpart, chiefly in the omission of shoulder straps and the addition of a black USN stencil on the breast of the coat.

E3: Major-General A. A. Vandegrift

Major-General Vandegrift, the commander of the 1 st Marine Division, is dressed for service ashore on Guadalcanal, in the USMC version of khaki shirt and trousers. The general also wears the tropical pith helmet with the addition of the USMC Eagle, Globe and Anchor device affixed to the front. Ground commanders, like Vandegrift, would substitute their black oxford service shoes for army-style russet ankle boots and would often carry small arms and wear web combat gear.

The 1st Marine Division insignia was the first patch worn by USMC troops during World War Two. This came about in response to a rumor that USMC troops might have to wear US Army uniforms during the war. Faced with this possible loss of identity, the division's operation officer, Lieutenant-Colonel Merrill B. Twinning, designed the insignia for the division. The number one represents the division, with its association to the Guadalcanal operation, and the stars are arranged in the pattern of the constellation, the Southern Cross, to symbolize the area where the action occurred.

Perhaps more than any other flag officer, Admiral Halsey is identified with the US Navy's efforts in the war against Japan. With his nickname "Bull," Halsey is typified as the "Old Salt" but one little-known fact about Halsey is that he is one of the few officers that obtained flag rank who had a tattoo sporting a large fouled anchor (rope wrapped around the anchor) on his right shoulder The more conventional portion of Halsey's uniform consists of the khaki shirt and trousers with the four stars of a full admiral on his shirt collar. The admiral, being a member of the aviation branch of the navy, wears brown shoes rather than the black of the surface navy. The cap is one of the many eccentric forms of headgear sported by flag officers, contrary to regulations.

Admiral McCain was also a member of the aviation branch of the US Navy so he, too, wears the brown shoes of that service. Admiral McCain, in a service known for the odd headdress of its commanders, wears a hat that is in a class of its own. Although the hat was a khaki service dress hat, McCain has removed the dress band that gives the cap its stiffness and pulled the cover back to such an extent that it has lost all of its original shape.

Commander Thatch is dressed in the khaki shirt and aviation green trousers, with a green overseas cap. The rest of his uniform is completed with the addition of a USN-style brown leather flight jacket with a fur collar. Originally, these collars were of a dark brown shade but repeated exposure to salt air had the effect of bleaching the fur to an almost russet shade. Often, the flight jacket would be adorned with the insignia of the owner's squadron painted on the breast of the coat.

All of the figures portrayed on this plate were members of the fraternity of Naval Aviators and. as such, were entitled to wear the wings of a Naval Aviator on their uniforms. These wings could be either an embroidered style or the more common removable metal wings.

Admiral Turner wears the khaki work uniform with the addition of a non-regulation khaki windbreaker and the khaki overseas cap with USN crest and the twin stars of his rear admiral's rank insignia affixed to it. 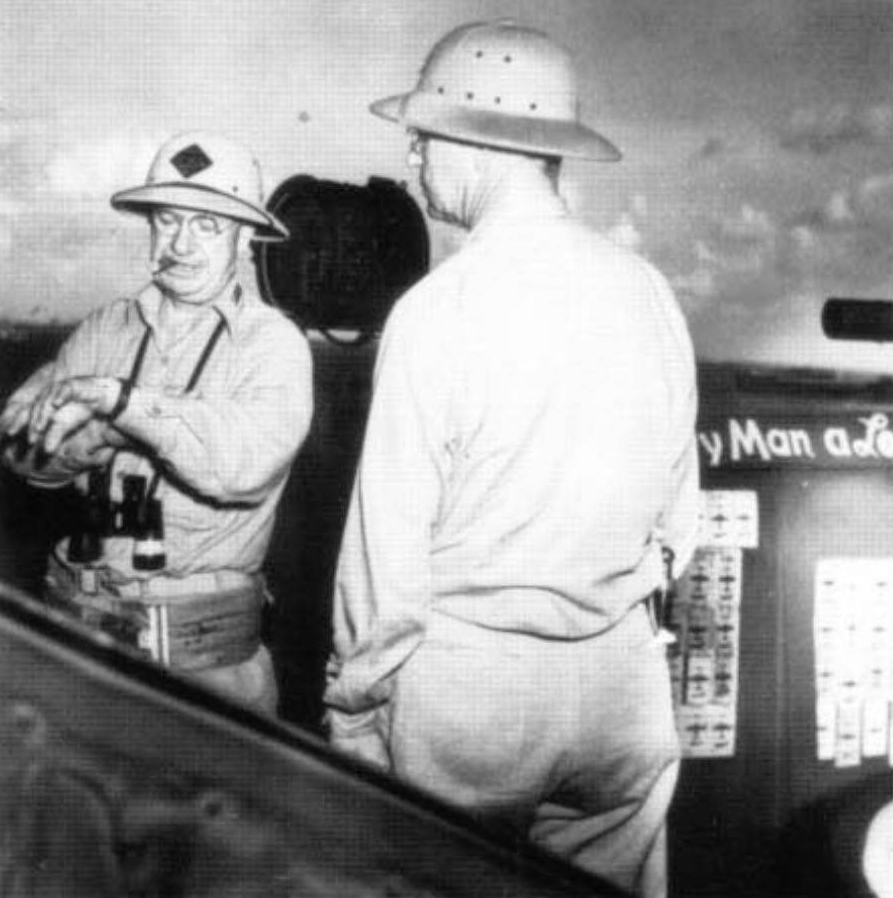 General Holland Smith (left) and Admiral Turner are shown during an amphibious invasion. Amphibious landings were always vulnerable to enemy air attack. To Turner's right, a handwritten notice reads, "Every Man a Lookout." Below it are airplane silhouettes to help identify friend from foe. (National Archives)

Lieutenant-Colonel Puller wears the full dress blue uniform of a marine officer, consisting of blue tunic, medium blue trousers with a scarlet stripe, and a service dress cap with a white cover. On Colonel Puller's medal bar is the award of the Navy Cross, with three gold stars signifying the fact that "Chesty" had won the cross four times for bravery.

The award of the Navy Cross was enacted in 1919 in order to reward both US and foreign personnel for either bravery or service. The actual award consists of a bronze cross, suspended from a blue ribbon with a ¼-inch stripe. Several crosses awarded during 1941-42 had a dark gunmetal finish, earning them the nickname "Black Widows" due to the number awarded posthumously.

The patch of the 2d Marine Division was approved for wear in 1943 and consists of a red spearhead, yellow torch, and white constellation of the Southern Cross. The division participated in the Guadalcanal, Tarawa, Saipan, Tinian and Okinawa invasions.

Rear Admiral Gallery was the commander of Task group 22.3. Rear Admiral Gallery wears the gray working uniform introduced in 1942 to replace the khaki working uniform. The shirt was the same cut as the khaki working shirt, with two breast pockets and no shoulder straps. Small silver rank stars were worn on each collar and the tie was plain black silk, as worn with the blue service coat. The ¼-inch wide web belt was also gray and the buckle was brass. The open frame buckle was a common variation from the more usual solid, covered buckle. The overseas cap was also of the same cut as the khaki model, but made up in gray cotton. On the left side of the curtain of the cap, a miniature of the service cap insignia was worn, while a small insignia of rank was worn on the right side.

Admiral Low was commander of the 10th Fleet, but was actually the mastermind behind the war against U-boats in the Atlantic. He wears the service dress blues, this time made of heavy serge. Admiral Low's cap is the universal combination cap with blue-black woolen cover, but he wears the embroidered prewar cap insignia. The pre-1941 cap insignia and buttons displayed an eagle looking to its left. Heraldically unfortunate, this configuration was changed in 1941 so that the eagle looked to its right. Interestingly, the overall design was not changed; only the eagle's head was modified, resulting in a somewhat unbalanced design for the new buttons.

Rear Admiral Kirk was the commander of the Western Naval Task Force on D-Day. The overcoat was often worn in the cold European climate. It was made of heavy blue-black woolen material, was double-breasted, lined with black sateen, and had two rows of one-inch gilt USN buttons. This coat was normally worn with the four large buttons fastened, leaving the collar open, but could be worn with the collar closed by means of a tab and black button on the underside of the collar. The waist was fitted, with a half belt in the back, and the skirts were full, extending one-third of the way between the knee and the ground. The cuffs had no stars but did display rank rings made of lustrous black braid.

The shield and eagle are in silver, the fouled anchors in gold. The device could be manufactured in one or two pieces. 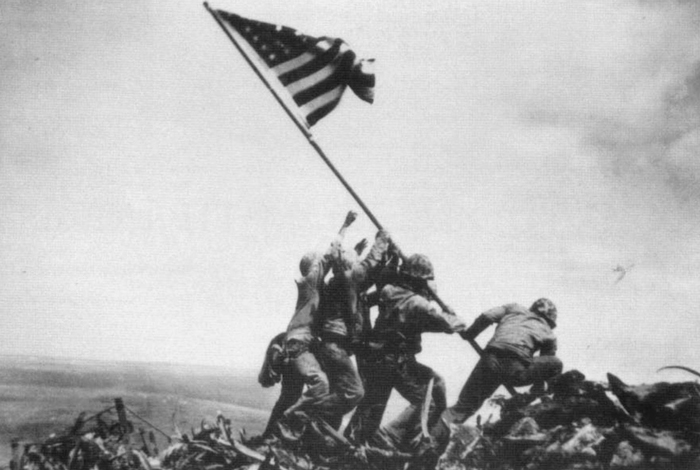 This is the Pacific War's most famous photo, the flag-raising on Iwo Jima. When Secretary of the Navy, James V. Forrestal, saw the flag rise over Mount Suribachi, he turned to General Holland Smith and said, "Holland, the raising of that flag means a Marine Corps for the next five hundred years." (National Archives) 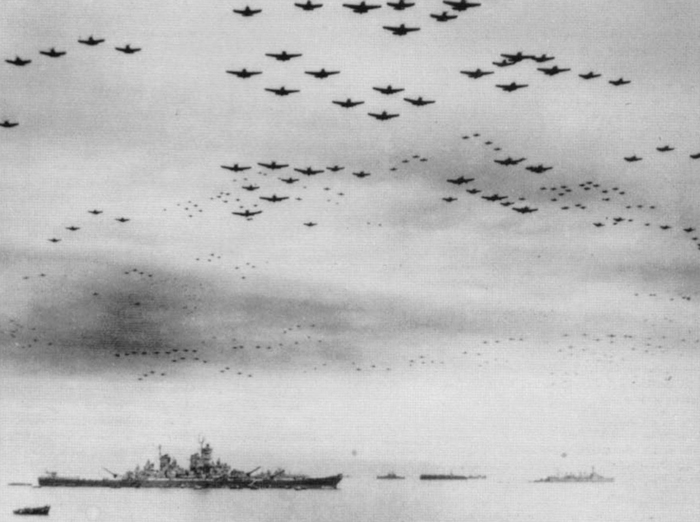 Fighters fly in formation during surrender ceremonies in Tokyo Bay. Secretary of the Navy, James V. Forrestal, wrote to discharged navy veterans about what the US Navy had achieved in the four years following Pearl Harbor: "It crushed two enemy fleets at once, receiving their surrenders only four months apart. It brought our land-based air power within bombing range of the enemy, and set our ground armies on the beachheads of final victory. It performed the multitude of tasks necessary to support these military operations. No other navy at any time has done so much." (National Archives)