Dress-quality plaited shoulder-boards for field officers consisted of two 5mm wide bright flat aluminium braids on a branch colour facing-cloth backing and 2-0 pips 1.5cm, 2.0cm or 2.4cm wide, made of galvanically brassed aluminium, from 7 November 1935 gilt aluminium. During wartime they were made from golden galvanised or lacquered grey aluminium. Field-quality boards had matt aluminium, later feldgrau braid. M1935 branch insignia, introduced 10 September 1935, was, from 7 November 1935, made of brass-plated or gilt aluminium, and, during the war, of gold-coloured galvanised or lacquered grey aluminium or zinc alloy. 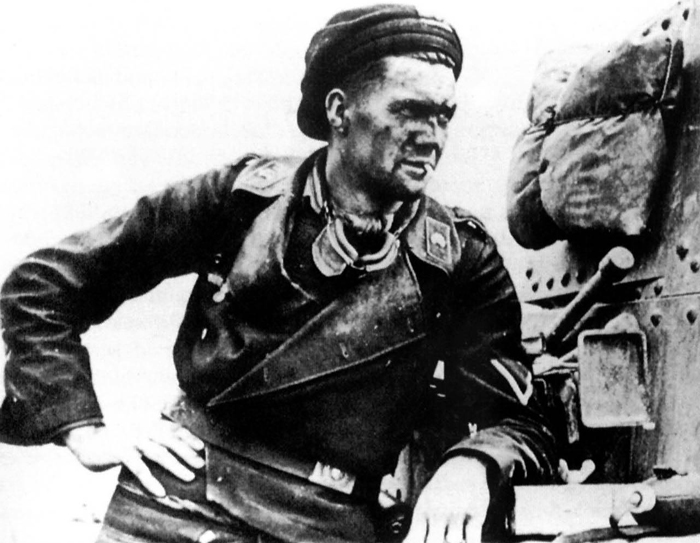 A tank-driver Gefreiter, exhausted by the Panzers' 'drive to the sea' through France in May 1940, enjoys a cigarette by his tank. He has not opted to wear his M1935 feldgrau field greatcoat over his M1934 special tank-crew uniform to protect it from the grime of battle. Note the drivers' goggles, civilian shirt and M1936 pullover. (Brian Davis Collection) 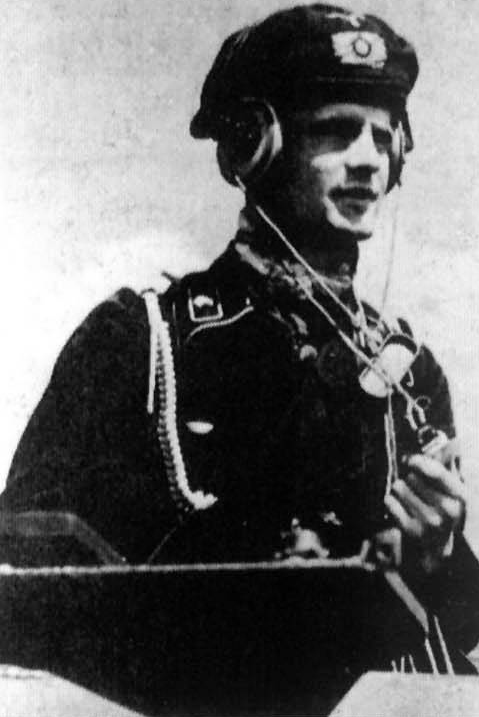 A classic view of a tank commander, wearing the 1934 special tank-crew uniform and the 1934 padded beret with tank commander's earphones. This officer is wearing the aluminium wire aiguillettes of a General Staff officer. France, May 1940. (Friedrich Herrmann)

Technical NCOs had distinctive plaited shoulder-boards with devices and pips in white aluminium; these were made from grey aluminium or zinc alloy during the war. From 23 September 1937 Farrier-Instructors wore interwoven triple golden-yellow woollen cords with a double golden-yellow woollen cord edging all on a crimson branch colour underlay, a horseshoe and 1-0 pips. From 9 January 1939 Fortress Engineer Foremen wore the same shoulder-boards in black artificial silk with a white artificial silk inner edging all on a black branch colour underlay, with a cogwheel (from 9 June 1939 a Gothic Fp) and 1-0 pips. On 7 May 1942 both sets of shoulder-boards were changed to red, with bright aluminium and red interwoven cords, with a double red cord edging. Farrier-instructors had a crimson underlay and a horseshoe, fortress-engineers a black underlay and Fp, and 2-1 pips.

Dress-quality rank insignia for senior NCOs consisted of 3-1 bright aluminium pips (1.8cm, 2cm or 2.4cm wide) on M1935 bluish dark-green cloth shoulder-straps, with branch colour piping and edged on all sides by 9mm wide bright aluminium 'single-diamond' pattern yarn braid introduced 10 September 1935. Field-quality rank insignia consisted of the same pips and braid on the M1933, M1934 and M1935 unpiped, and M1938 and M1940 piped field shoulder-straps. 9mm silver-grey artificial silk braid was also worn, with grey aluminium and zinc alloy pips during the war, and from 25 April 1940 feldgrau matt artificial silk or cellulose-fibre wool braid. Branch insignia was of the same metal as the pips. A Hauptfeldwebel/Hauptfeldwebeldiensttuer wore a second 1.5cm wide bright aluminium 'double-diamond' pattern yarn braid above the cuff of the Waffenrock, and two 9mm braids on the cuff of other uniforms.

Junior NCOs wore the same shoulder-straps and braids as senior NCOs, the Unterfeldwebel wearing braid around the shoulder-strap, the Unteroffizier omitting braid across the base of the strap. Dress-quality branch insignia was fully embroidered in the branch colour on the shoulder-strap, while field-quality insignia was in branch colour wool or cotton yarn, and from 19 March 1937, also in artificial silk, embroidered in a chain-stitch pattern. Engineers' black and Medical Corps' dark-blue unit insignia were outlined in white chain-stitch on bluish dark-green shoulder-straps to render them more visible. During the war the embroidery was often full flat thin yarn.

Other ranks wore the same shoulder-straps as junior NCOs, with branch colour branch insignia but without braids. The M1936 rank insignia consisted of chevrons, point-down, of 9mm NCO braid combined with embroidered silver-grey or aluminium thread pips (hand-embroidered bright aluminium bullion on privately purchased items). The insignia was sewn on to a triangular (circular for Obersoldat) backing of bluish dark-green facing-cloth, changed in May 1940 to feldgrau uniform cloth, and black for tank crew uniforms. This rank insignia was adopted on 25 September 1936 (with effect from 1 October 1936) and developed from the original Reichswehr system adopted 22 December 1920.

From 26 November 1938 rank insignia on the white and reed-green twill fatigue-uniforms consisted of 1cm wide feldgrau fabric and 'single diamond' braid with two thin black inner pipings. A Stabsfeldwebel wore a braid ring below two braid chevrons point-up, on each lower-sleeve; Hauptfeldwebel two rings; Oberfeldwebel, a ring and a chevron, Feldwebel, a ring only. Unterfeldwebel and Unteroffizier wore braid collar edging only. This NCO insignia was replaced by new sleeve rank insignia introduced 22 August 1942. Men wore chevrons of the same braid and feldgrau fabric, with braid pips sewn on to white or reed-green backings. 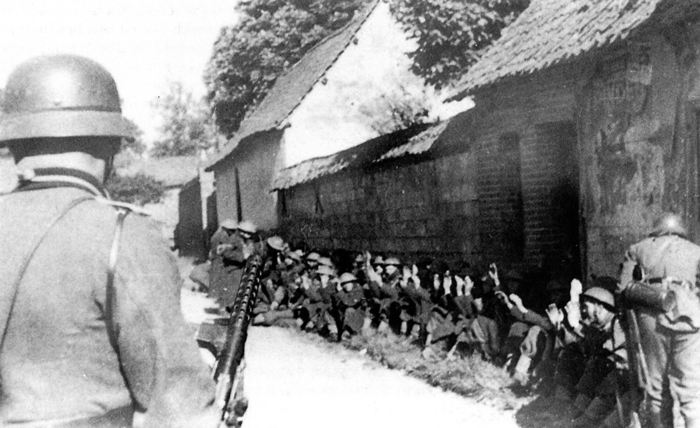