The Battle of France

On 16 May Army Groups A and B began to advance into France. They were confronted by the 4,320,000-strong French Army, organised in Army Groups 1-3, with eight armies composed of 38 infantry, one fortress, nine motorised, three light mechanised, four light cavalry, and three armoured divisions, a total of 87 divisions, supported by nine British, one Czechoslovak and four Polish infantry divisions.

A force of nine Panzer divisions, comprising Panzergruppe von Kleist, XV Corps and General der Panzertruppen Heinz Guderian's XIX Corps (redesignated Panzergruppe Guderian on 1 June) with the Groβdeutschland Motorised Regiment, burst through the French 1st Army Group at Sedan, reaching the Channel coast on 22 May. Concerned that the unit, containing almost all Germany's armoured troops, had outrun its logistical tail and supporting infantry, and was vulnerable to an Allied counterattack, Von Rundstedt ordered a halt on 23 May, allowing the Allies to evacuate 338,226 British, French and Belgian troops from Dunkirk from 27 May to 4 June.

On 5 June Army 'Operation Red' commenced. Army Group B advanced along the French Channel and Atlantic coasts, stopping before Bordeaux on 22 June, while A headed through central France and C forced the Maginot Line. The French Army signed an armistice on 25 June. Eupen and Malmédy districts in Belgium were annexed and joined Wehrkreis VI, Luxembourg and Lorraine Wehrkreis XII, and Alsace Wehrkreis V. Northern, western and eastern France was occupied, leaving central and southern France unoccupied as a nominally independent French state under Held Marshal Pétain.

The verdict on Blitzkrieg

The Blitzkrieg period had restored the reputation of the German armed forces, but weaknesses had emerged. Success had confirmed Hitler's belief in his own genius and the corresponding inferiority of his professional generals. Jealousy between the OKW, the Wehrmacht High Command, and the OKH, the Army High Command, exacerbated by the fact that Hitler controlled both, led to a division of authority. The Danish and Norwegian campaigns were controlled by OKW, and the Polish and Western campaigns by OKH. Panzergruppe Kleist's classic Blitzkrieg tactics had proved brilliantly successful, but the infantry performance in Norway had been less decisive. Finally, the swift advances of the Blitzkrieg had enabled large numbers of enemy troops to evade capture and organise themselves as guerrilla armies, a constant threat to the German occupation authorities. 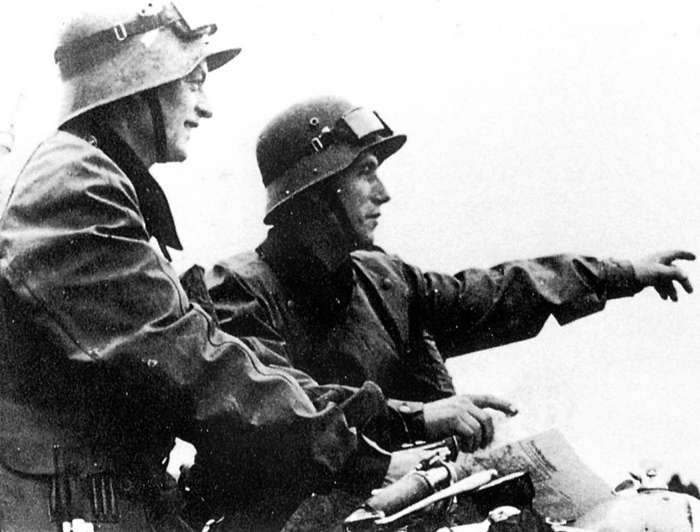 Poland, September 1939. Dispatch riders in field uniform. They wear M1934 rubberised greatcoats, with shoulder-straps removed for security, and M1935 dispatch-cases. Their M1916 helmets were already obsolete but were still widely encountered in the early years of the war. (Brian Davis Collection)

The Armies of Occupation

The Army established transit prisoner-of-war camps (Dulags) in occupied territory which collected enemy POWs before transfer to the officer camps (()flags) and other-rank camps (Stalags). They were organised by each Wehrkreis and guarded by Landesschützen units unfit for front-line combat.

Occupied territories were placed under military governments - Poland under the General-Gouvernement (until September 1942); Denmark (from August 1943); Belgium-Northern France. The rest of occupied France was organised under Militärbefehlshaber (Army Governors), and Netherlands and Norway under Wehrmacht-befehlshaber (Armed Forces Governors). Each governor controlled regimental-level district commands (Oberfeldkommandanture), which in turn were subdivided into battalion-level sub-districts (Feldkommandanture) and then into smaller metropolitan, urban or rural commands.

In addition three conquered territories had occupation armies. Norway, from December 1940, had 'Norway Army' (Armee Norwegen) made up of three, sometimes four Corps. The Netherlands, from June 1942, had LXXXVIII Corps. Army Groups A, B and C remained in Occupied France, to be replaced in October 1940 by Army Group D with 1st, 7th and 15th Armies.

THE UNIFORM OF THE GERMAN ARMY

All dates connected with the introduction of new uniforms, equipment and insignia give the date of the Army Order. However, as in all armies, there was a delay (ranging from a few weeks to as much as two years) in new items reaching individual units, especially front-line units, remote garrisons, or in the Replacement Army. Furthermore, individual soldiers, especially senior officers, often preferred to retain obsolete items if they were of sentimental value, or of better quality than the replacement. They gave the owner an air of individuality and marked him as an experienced 'old sweat'. An army order of 10 July 1942 decreed that all obsolete clothing could continue to be worn for the duration of the war.

The most visible symbol of the Wehrmacht was the breast eagle, the Hoheitsabzeichen, or 'Sovereignty Badge', worn by all ranks above the right breast pocket of most uniform items, and identifying the wearer as fit to bear arms. The Army version, introduced 17 February 1934, with effect from 1 May 1934, depicted an eagle with straight, outstretched wings grasping a circled swastika. Most other uniformed organisations, including the Waffen-SS, introduced various styles of eagle badges, but were obliged to wear them on the left upper arm, since the right breast was reserved for the Wehrmacht (and, curiously enough, the National Socialist Flying Corps, the NSFK).

The various uniform items of the new Army uniform began to appear following publication of the Dress Regulations of 8 April 1935. These uniforms and insignia were developments of, and continued the traditions of, the Army's four predecessors - the Reichsheer (National Army) of the Second Reich (18 January 1871-11 November 1918); the Friedensheer (Peacetime Army, 11 November 1918-5 March 1919); the Vorläufige Reichswehr (Temporary National Armed Forces, 6 March 1919-31 December 1920); and, most importantly, the Reichsheer (usually, but incorrectly, known as the Reichswehr) of the German Republic (1 January 1921 - 15 March 1935).

By the end of 1935 the main uniform styles were established. The basic uniform colour was a greenish-grey, introduced 2 July 1929 and given the traditional but inaccurate title of feldgrau, 'field grey' (originally designating a plain mid-grey introduced 23 February 1910). 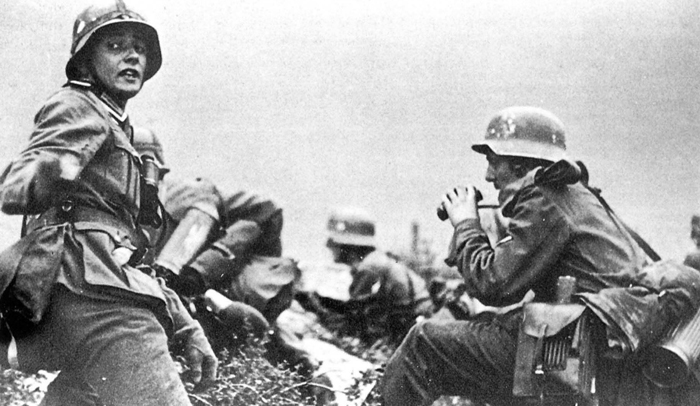 Facings were in a bluish dark-green 'facing-cloth', finely woven to give an appearance of a thin felt, introduced 29 June 1935, and the same material was usually used for branch colour patches and pipings. Reichswehr uniform items, in M1929 feldgrau but with a darker greenish-grey facing-cloth, should have been withdrawn by 1937, but were still occasionally encountered in the 1939/40 period.

The Regulations of April 1935 prescribed ten orders of dress in peacetime for officers, two ceremonial uniforms and a parade uniform for formal occasions; a walking-out and reporting uniform for semi-formal occasions; service, undress and guard uniforms for training and barracks duties; the field uniform for combat; and sports dress (omitted in this study). (See Table 1 for more details.) Non-commissioned officers and other ranks had nine, omitting the ceremonial uniforms and adding a fatigue uniform for work-duties in barracks or in the field. Some uniform items were manufactured in different versions for officers and other ranks, while others were standard items worn by all ranks.

New regulations were issued on 28 December 1939 to cover the wartime period and the earlier strict observance of regulations eased. The types of uniforms were simplified. Service uniform could be worn on most formal and semi-formal occasions, but, inevitably, the field uniform became the most common uniform encountered in the front line and rear areas. Furthermore, Replacement Army units were often issued captured Austrian, Czech, Dutch, French, and even British uniform items, dyed and remodelled to conform to German patterns. 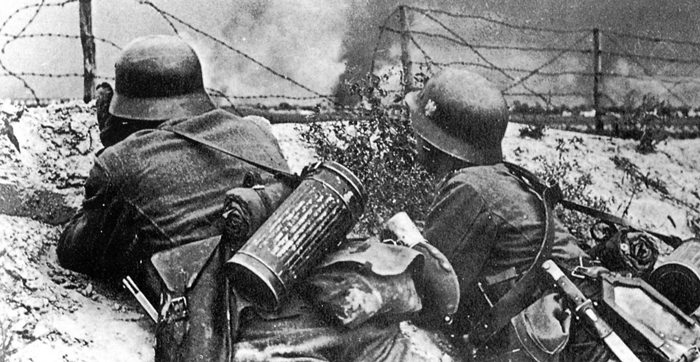 The saddle-shaped officers' peaked cap, introduced 10 September 1935 and worn with most officers' uniforms, had a high crown at the front falling steeply to the sides. Later caricatured as typically German, it was in fact a revolutionary design, replacing the traditional 'plate' style with its high cap-band and low circular crown. It was manufactured in feldgrau tricot or 'eskimo' material. The Ml 935 eagle and swastika badge, manufactured in bright aluminium, was worn above a stamped bright aluminium red (inner)-white-black (outer) national cockade in an oak-leaf wreath, on the bluish dark-green facing-cloth cap band. There was 2mm thick piping around the crown in branch-of-service colour, and above and below the cap band, a plain black-lacquered vulcanised fibre peak, and a matt aluminium wire chin-cord secured by two 12mm bright aluminium pebbled buttons. General-officers had gold-coloured metallic woven cord cap-pipings and gold wire; from 15 July 1938 this became yellow artificial 'celleon' wire, woven chin-cords with matt gold pebbled buttons. Hand-embroidered bright silver or bright aluminium bullion badges on a bluish dark-green facing-cloth backing were permitted on fine-cloth privately purchased caps.

The style, though not the colour, of the feldgrau tricot pocketless waisted officers' dress-tunic, adopted 29 June 1935, invoked the proud military traditions of the Reichsheer of the German Empire. It had bluish dark-green facing-cloth collars and cuffs, branch colour facing-cloth pipings, and bright aluminium pebbled buttons and wire braids. The piped front was secured by eight buttons, with three on each of the piped ornamental back 'tail-pockets'. Insignia consisted of the officers' superior dress-quality breast-eagle, collar-patches, cuff-patches and shoulder boards. The bright, hand-embroidered, flat aluminium bullion breast eagle had a bluish dark-green backing. The piped collar had M1935 branch colour facing-cloth collar-patches, with two bright aluminium wire embroidered 'Guards' braids' developed from those worn by elite Guards regiments of the Imperial Reichsheer. Similarly, the piped cuffs had two branch colour cuff-patches, each with a button and braid. For shoulder-boards see Table 3. Privately purchased tunics were usually shaped at the waist and had higher, stiffer collars.

General-officers had a bright gold bullion or golden-yellow hand-embroidered thread breast-eagle on a bluish dark-green facing-cloth backing. The collar and cuff-patches showed the bright gold bullion or 'celleon' hand-embroidered thread Alt-Larisch design introduced 22 March 1900. After 1939 they were in matt yellow yarn picked out in dark yellow or buff, on a bright-red facing-cloth patch.

On 21 March 1940 further manufacture of the Waffenrock was forbidden, and existing tunics were to be converted to field tunics by removing the facing-cloth cuffs and tail pockets and substituting field-quality insignia. In future only the officers' 'piped field tunic', introduced 12 July 1937 as an alternative to the Waffenrock, would be worn in full-dress. This was a field tunic with branch colour collar facings, front and cuff pipings, and dress-quality collar-patches, shoulder-boards and breast-eagles. The M1920 service-tunic (introduced 22 December 1920) or the M1928 service-tunic (introduced 31 October 1928), with respectively eight or six buttons, diagonally flapped concealed hip-pockets and branch colour facing-cloth front piping, was often retained, especially by general-officers. 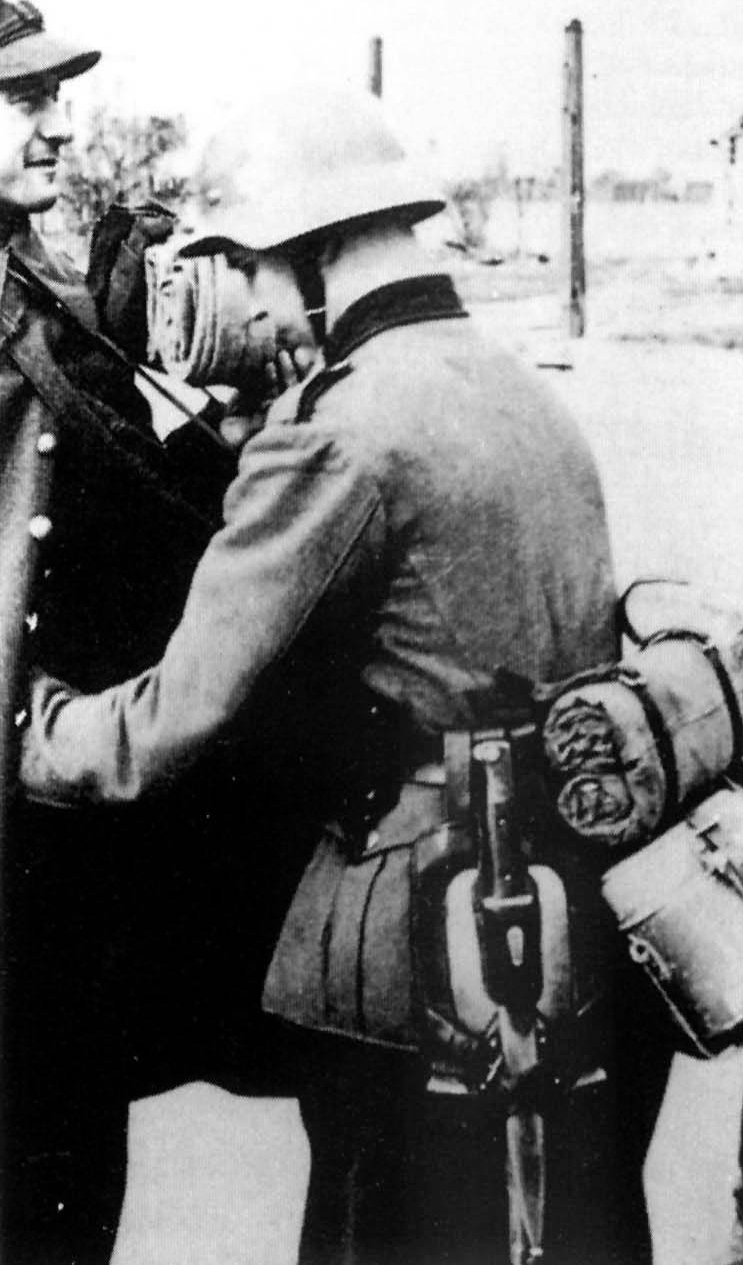 An infantryman in Poland in October 1939 wearing the M1935 field uniform, with reversed shoulder-straps to conceal unit insignia, searches a Polish prisoner. There is a particularly good view of his improvised assault-pack, consisting of a bayonet strapped to his entrenching-tool, with the M1931 camouflage shelter-quarter and the M1931 mess-kit tied to his belt with belt supporting-straps. (ECPA) 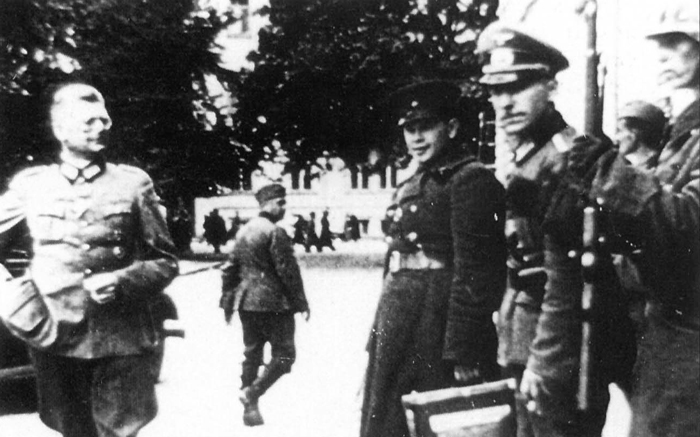 The standard M1935 steel helmet was introduced 25 June 1935, a development of the M1916 and M1918 helmets, with their prominent side-lugs. Painted matt feldgrau a black-white-red diagonally striped aluminium national shield was fixed to the right side, and a silver-white Wehrmacht eagle on a black painted aluminium shield on the left side, as ordered on 17 February 1934. Officers could also wear lightweight aluminium Vulkanfiber helmets on parade.

The officers' dress belt, introduced 9 July 1937, was made of bright aluminium brocade with two 5cm bluish dark-green stripes. The circular buckle was stamped bright aluminium (gold-plated or galvanically gilded for general-officers) showing a Wehrmacht eagle with folded wings in a wreath. The stone-grey officers' riding-breeches were plain, general-officers retaining their pipings and broad stripes.

'Walking-out' uniform consisted of the officers' service-cap, standard dress-tunic or officers' piped field tunic with ribbons, dress greatcoat if ordered, long trousers, lace-up shoes, white gloves and sword. The 'reporting uniform' added the M1934 belt, breeches and riding-boots, and grey gloves. The dark-brown leather officers' belt and cross-strap, introduced 18 May 1934, had a pebbled matt aluminium open-claw rectangular buckle, which was matt gilt for generals. On 20 November 1939 the cross-strap was abolished. 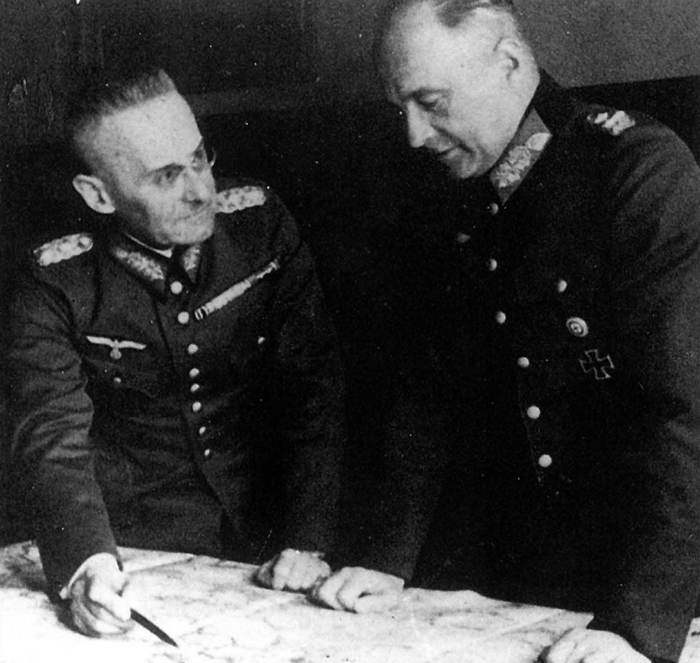