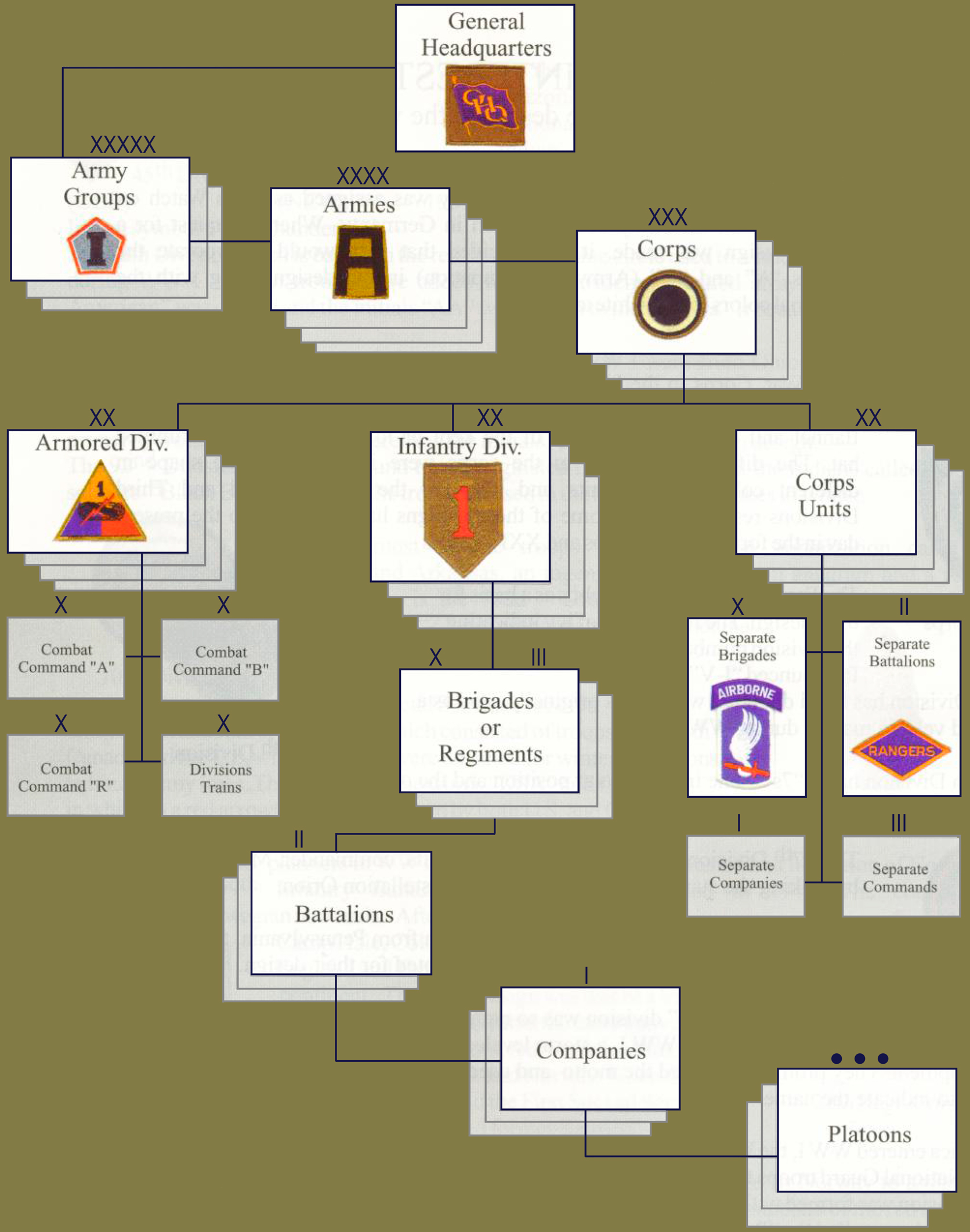 XX - Divisions consist of two or more Regiments or Brigades.

X - Brigades may be separate units.

I - Companies consist of two or more Platoons.

Reasons why some patches are designed the way they are.

At the end of WW I, the U.S. Third Army was assigned as "The Watch on the Rhine" in the Army of Occupation in Germany. When a request for a patch design was made, it was decided that they would incorporate the letters "A" and "O" (Army of Occupation) in the design along with the national colors of red, white and blue.

During the American Civil War, Corps in the Union army were indicated by a series of geometric shapes in order to simplify identification in battle. These shapes were usually cut from a piece of flannel and attached to the top of the kepi or to the front of the brimmed hat. The different divisions in the corps were indicated by the shape in different colors - red, white and blue for the First, Second and Third Divisions respectively. Some of these designs have survived to the present day in the forms of the I Corps and XXIV Corps.

The Fourth Division uses a rebus as a basis for their design. The four leaves of ivy indicating the division number and the Roman numeral IV, Pronounced "I-V".

The Fifth Division has a red diamond which was originally used as a baggage and vehicle marker during WW I.

The Seventh Division has 2 "7s" - one in the regular position and the other inverted making the familiar hourglass design.

The 27th Division uses a pun on the name of its' commander, MG O'Ryan, by making the stars in the patch form the constellation Orion.

Since the 28th Division was formed with men from Pennsylvania, the keystone, which is the state symbol, was adopted for their design. 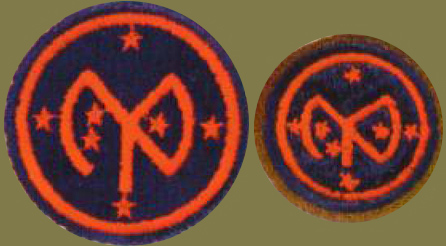 The 38th "Cyclone" division was so named because while in training in Mississippi during WW I, a storm leveled the units encampment. They promptly adopted the motto and used the letters CY to indicate the name.

When America entered WW I, the War Department wanted a division made up of National Guard troops from many states to fight in France. The 42nd Division was formed with men from 26 states and the District of Columbia and was called the "Rainbow" division because of the variety of origins of the troop.

Perhaps the best known example of a division changing designs for political correctness belongs to the 45th Division. From its' beginnings as an Arizona, New Mexico, Oklahoma and Colorado National Guard division, they had used the ancient indian symbol of the swastika. With the rise of the Nazis, this emblem fell into disrepute. So, in 1939, the division changed from the swastika to the more popular.

The 82th Division patch is based on the red square and blue circle used to mark the baggage and vehicles during WW I. When troops were added from six widely separated army posts, the name "All American" was coined and the initials "AA" were added to the insignia. It became an Airborne division in 1942.

Since most of the troops in the 83th Division during WW I were from Ohio, the patch design is an anagram of the letters O-H-I-O.

Originally called the "Texas and Oklahoma' Division, during WW I the 90th was composed of troops primarily from the two states. Therefore, the initials "T and O" in the patch design.

The 92 Division patch design and name originated from the fact that the Indians called the Negro soldiers "Black Buffalos" when the troops dressed in the heavy buffalo robes in winter.

Because most of the troops constituting the organization came from Missouri and Arkansas, an ingenious use of both an anagram and a rebus in patch design is the 102d "Ozark" Division. When worn correctly, the letters "O" and "Z" are quite apparent and under the "Z" is an arc. Thereby: O+Z+Arc - OZARK.

The First Special Service Force is a unique international organization which consisted of troops from both Canada and the US. who originally were destined for winter operations behind enemy lines. The patch used the words "USA" and CANADA" in white on a red arrowhead and was worn by both U.S. and Canadian troops.

Originally, the allied planners in WW II made provisions for the invasion and liberation of Norway. To this end the 99th Infantry Battalion (Separate) was formed in 1942. The concept was to enlist only Norwegian nationals. After mountain training at Camp Hale, Colorado the battalion was sent to England and finished the war fighting on the continent. The patch design was that of a Viking sailing ship which indicated the units native background. The colors, red white and blue are the same for both the U.S. and Norway. When the 99th Infantry Battalion and the First Special Service Force (which included former Rangers) were inactivated, the 474th Infantry Regiment was born, which later became the 74th Regimental Combat Team. This new unit was designated to go to Norway to assist in the immediate post-hostilities repatriation of Axis forces. The patch was a composite of the red arrowhead from the First SSF, the Viking ship from the 99th and the Ranger scroll. This patch is also encountered with a blue arrowhead. There is no evidence that this was ever authorized so it exists as a novelty and was quite possibly a manufacturers' error.