On 1 April 1945 the 10th Army landed four divisions on the 65-mile4ong island of Okinawa, unopposed. Waiting in the hilly southern region were about 100,000 entrenched Japanese troops. Besides the 1st and 6th Marine Divisions, the 10th Army deployed the 7th, 27th, 77th and 96th Divisions. The US Navy fired over 600,000 large calibre shells in support. Southern Okinawa was taken yard by yard by riflemen, tanks and flamethrowers; the fighting was as savagely intense as in any previous island battle, and involved many more men on both sides, for longer - Okinawa did not finally fall until 21 June. With ferocious kamikaze attacks on the supporting fleet, Okinawa overall cost the US forces 50,000 casualties.

The US commitment to this theatre was in aircraft and logistics. Road- building by US Army Corps of Engineers and a massive aerial supply operation proved critical in supporting the Chinese war effort, and air support was extremely valuable to the British/Indian forces. Besides advisors and small units deployed to help the forming Chinese Army, the only US combat unit in the CBI was the 3,000-man 5307th Provisional Unit (known at various dates as 'Galahad', 'Merrill's Marauders', and 'Mars Task Force'). This was deployed to Burma in 1944, and helped British/Indian units seize the strategic airfield at Myitkyina. 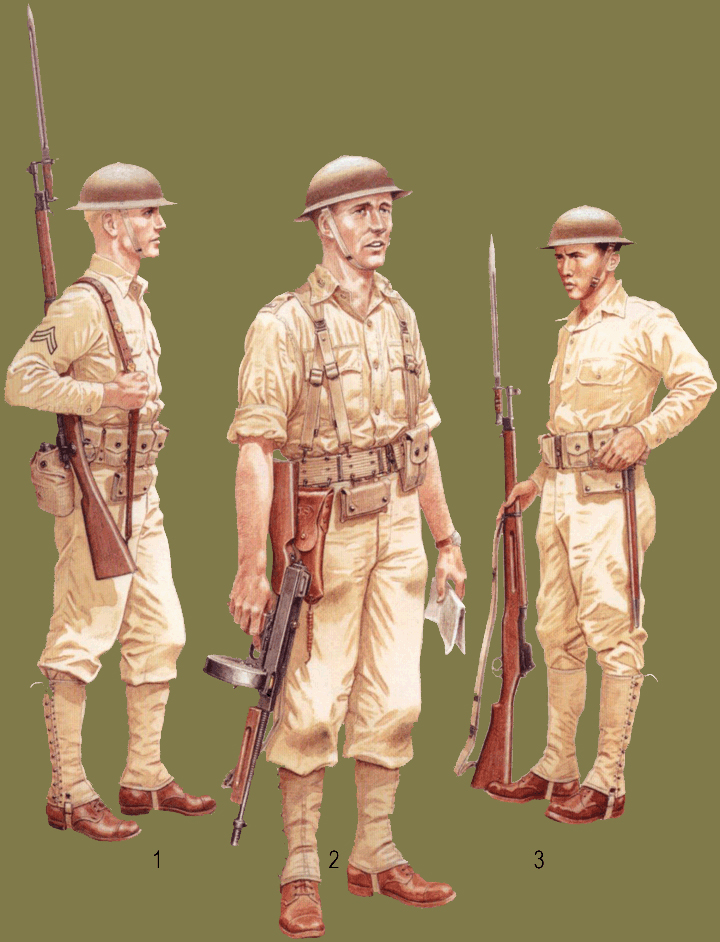 This corporal is among the 23,000 US and Filipino regular troops defending the Philippines against the Japanese onslaught. His khaki cotton Class C ('chino') uniform is comfortable, but its light colour and lack of durability will be found wanting in combat; his rank chevrons are displayed on both sleeves. His helmet is the M1917A1 'dishpan' with the newer khaki chinstrap. Although a small number of M1 Garands were available in the Philippines, this soldier, like most, is armed with the standard M1903 Springfield bolt action rifle. Forsaken by the US, the 'Battling Bastards of Bataan' said that they had 'No Mama, no Papa, and no Uncle Sam'.

Officers' khaki shirts differed from the EMs' in having epaulettes (shoulder straps), and in the Philippines the pocket flaps were often customised as shown. This officer wears his rank bars at the end of his epaulettes and cut-out national and branch insignia on the collar points, as required in prewar regulations. This configuration was soon changed to wearing rank on the right shirt collar and branch on the left. This cavalryman has been assigned to an infantry unit and so wears the appropriate boots and leggings. His M1936 pistol belt and supenders support his .45cal semi-automatic pistol in a russet holster, web double-magazine pouch, World War I first aid pouch and (obscured here) canteen. His Thompson SMG is the prewar M1928 model with the distinctive top bolt and 50-round drum magazine.

Gen MacArthur was in the process of building up the new 100,000-man Filipino Army for the impending war with Japan which was anticipated to begin no sooner than mid-1942. Unprepared for war in late 1941, they performed poorly at first, but by the time the combined US/Filipino regulars were defending Bataan they had become viable soldiers. Filipino units were led by both Filipino and US officers. This well equipped man is armed with the World War I surplus M1917 (P17) rifle and helmet. If he survives the fighting to be captured he will probably have to endure the 'Bataan Death March' - during which more than 600 US and 5,000 Filipino soldiers would die of neglect, exhaustion and brutality. He will suffer unimaginable hardship as a prisoner in Japanese hands until liberation in 1945. 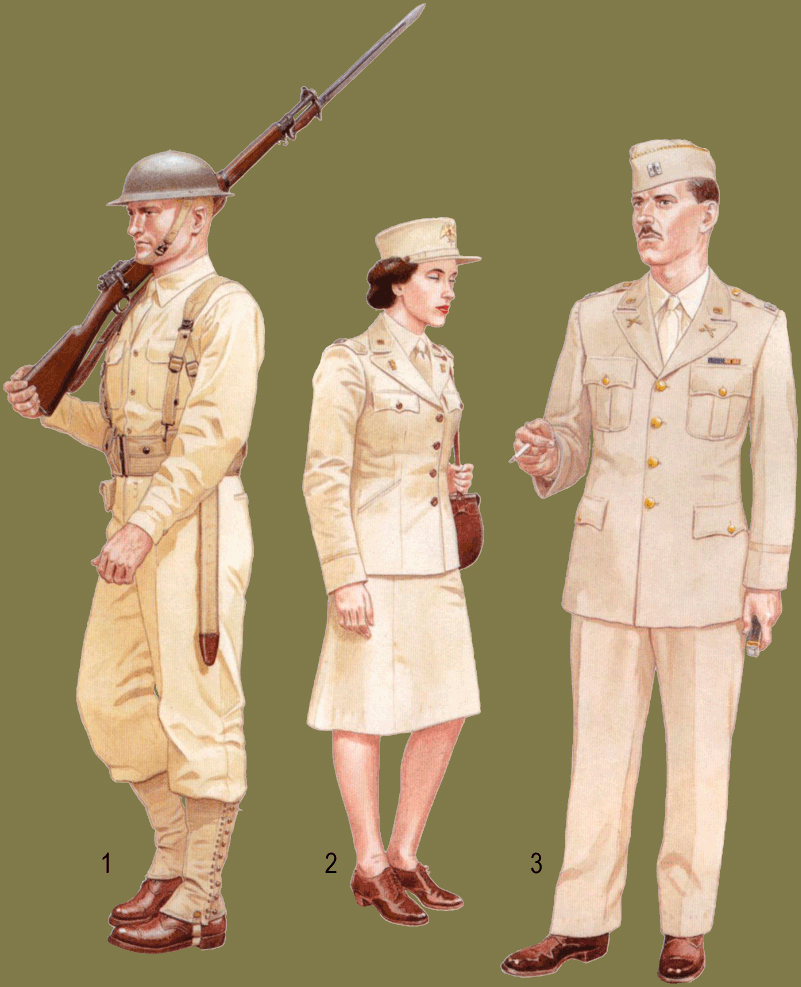 This soldier on sentry duty still awaits the issue of the new M1 helmet and M1 Garand rifle; he is also wearing a cavalry pattern cartridge belt, identified by its missing pouch on the front - pistol-armed horsemen used this spot to mount their two-magazine .45 pouch. Note the long World War I bayonet scabbard covered with canvas and leather. Brass tunic collar disks bearing 'US' and branch symbols were to be worn on the right and left shirt collar points respectively in 1942, but this order was soon rescinded. His tie is worn tucked into the shirt, as would be required throughout the war. In the autumn this man would revert to wearing the normal dark brown drab wool uniform. When he is issued with a new M1 helmet and Garand it will almost certainly mean that his unit is about to go overseas.

This officer, depicted immediately before the full incorporation of this organisation into the US Army as the Women's Army Corps, wears the first pattern officers' khaki cotton tunic; this was also available in gaberdine, similar to the male officer's khaki service tunic. The WAAC uniform design was a compromise; suggestions were requested from a number of leading civilian designers, but the final choice was predictably a 'committee compromise'. Note the unusual transverse shoulder straps, soon to be replaced by epaulettes - these bear metal rank insignia; the false breast pockets, and slash waist pockets; 'US' above branch badges on the collars and lapels; the issue shoulder bag, rayon stockings, and brown Oxford shoes. The hat was unofficially named after the female commander of the WAAC/WAC, Col (Director) Oveta Culp Hobby; here it still bears the WAAC's 'walking buzzard', soon to be replaced by the US Army officer's universal eagle badge.

Khaki coats and hats were used prewar but they were made of a moderately heavy cotton; in 1942 a slightly synthetic- looking gaberdine was also authorised for use in these coats. This coat and matching trousers would remain the standard until well after World War II. The single stripe of slightly contrasting cuff braid was the mark of officer status for all commissioned ranks. A khaki version of the conventional visored officer's service dress cap was also authorised, but this captain wears the khaki overseas cap, trimmed with mixed gold/black piping on the upper and front edge of the curtain; rank is worn at the front left. The national cypher is worn above branch insignia on the collar points and lapels; the latter sometimes displayed unit numbers, but these were not commonly available. His ribbons represent the American Campaign Medal and the Asiatic-Pacific Medal; the bronze fixture on the latter is a 'battle' star for service in New Guinea or on Guadalcanal.